This is the beginning of our 16-Night Panama Canal & South America Cruise, from Fort Lauderdale USA to Valparaiso in Chile.

Over the next 16 days we will cruise more than 4000 Nautical miles stopping at Cartagena in Colombia, Colon in Panama, before a full transit of the Panama Canal, then a stop in Ecuador at Manta, followed by two ports in Peru, Salaverry (Trujillo) and Lima, before we reach the northern tip of Chile for a stop at Arica in Chile and eventually disembarking in Valparaiso on December 20th.

The map of our voyage Fort Lauderdale to Valparaiso

After checking out of the hotel which was prepaid the shuttle bus was ready and waiting for us. We had booked it for 11am and the driver was already waiting and soon we were making the short ride to the Port Everglades cruise terminal.

The shuttle costs $9 per person and it took about 12-15 minutes depending on traffic. Once again the driver asked for a tip, can you believe it.

Our bags were taken as soon as we had unloaded them from the back of the van and loaded onto trolleys, the man who lifted them all of 3 metres asked for a tip, this time we gave him some, hoping that we’d see the bags again.

Into the terminal we walked and directly through security and passport control. I had to take off my belt, a first at a cruise. After that it was a short walk to the check-in and with only a steady trickle of people we went to the next available assistant to sign the normal health form, this one had a mention to Ebola on it.

The documents signed and cruise cards in hand we proceeded upstairs to the departure lounge which was empty as we were already boarding, a quick scan of the card and a photo taken before the final stroll to board.

Stepping aboard the Infinity

Along the red carpet, albeit a short one but still, here we were handed a glass of bubbly or Mimosa and welcomed aboard. We sat in the Martini bar area and enjoyed the welcome drink. The cabins were not going to be ready until around 1.30pm (actually 1pm).

“Lunch at the Oceanview Cafe on Celebrity”

I noticed an officer from the Millennium on board and said hello before heading up to the Oceanview Café buffet for lunch.

Wow, what a welcome, the buffet area was not crowded yet and also very calm, with plenty of staff around assisting.

The buffet had a very good selection and we enjoyed our meals as we shared the table with a couple and had some good conversations. 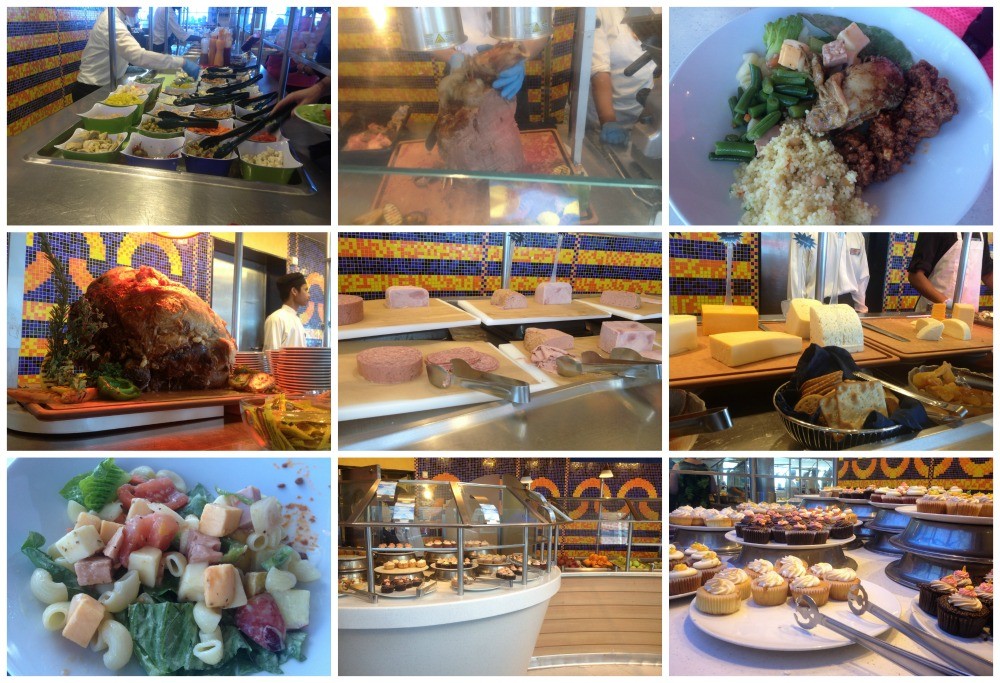 Lunch from the Oceanview cafe buffet

At 1pm it was announced that the cabins were ready and so we made our way to Deck 7. 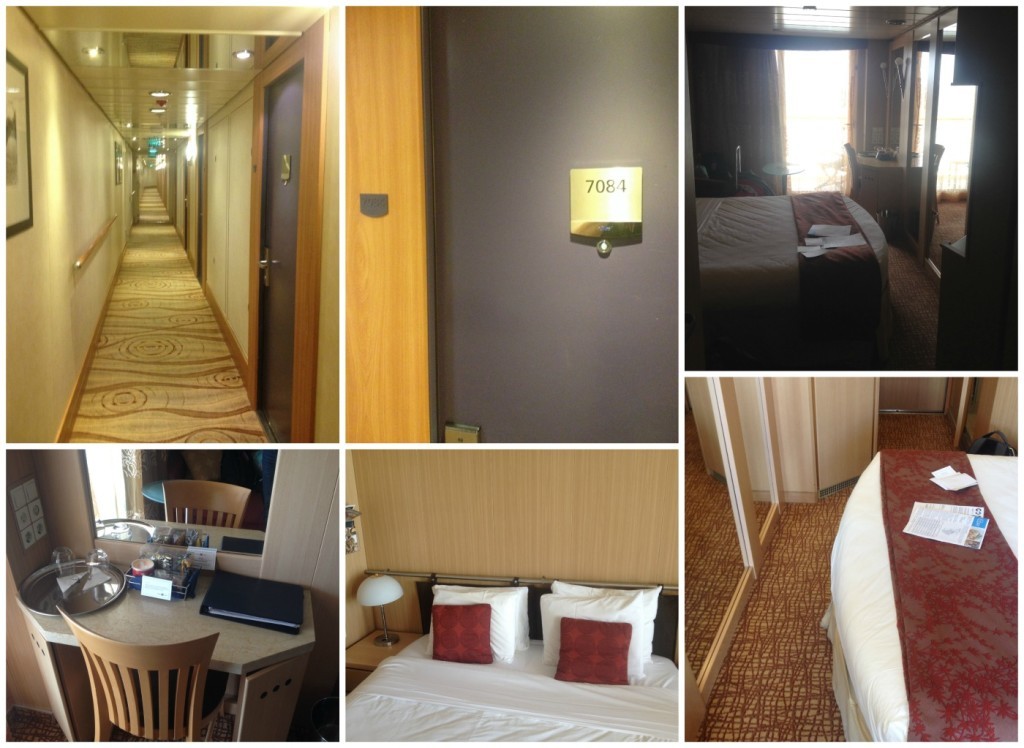 It is a wonderful balcony cabin, just perfect for us and such an awesome feeling actually standing on the balcony and looking out at the goings on.

A huge feeling of immense gratitude from us knowing that we have received an awesome upgrade from the base inside cabin which I had booked, to be staying in a Balcony cabin. 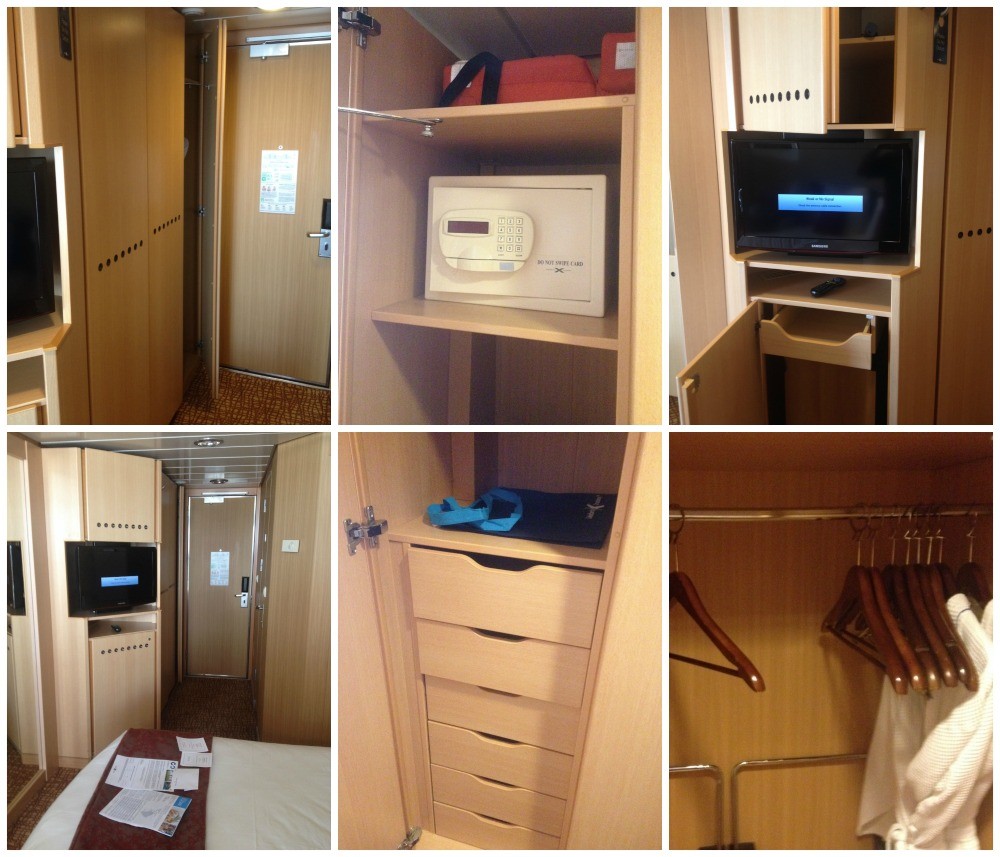 Considering the dramas we had with this booking earlier in the year almost not even having a cabin onboard, having our deposit returned and our original booking cancelled with the only option to re-book at a huge price increase.

Thankfully our agent Pam worked her magic and secured an inside cabin and honoured the original deal that I had booked, and somehow the upgrade angels were looking out for us.

“Check out the bathroom on Celebrity Infinity”

And the selection of lotions etc.

Next up we did a little exploring of the ship. The Infinity is a Millennium class ship which is very similar to the Celebrity Millennium that we were on earlier this year for a repositioning cruise Japan to Vancouver.

We also noticed a few of the crew have joined this ship and we said hello to them as they remembered us which is a great feeling.

For some strange reason we stepped onto the sports court and Moni shot a few hoops before playing ball, next minute I am bleeding from a scratch on my nose… Moni takes no prisoners that’s for sure. 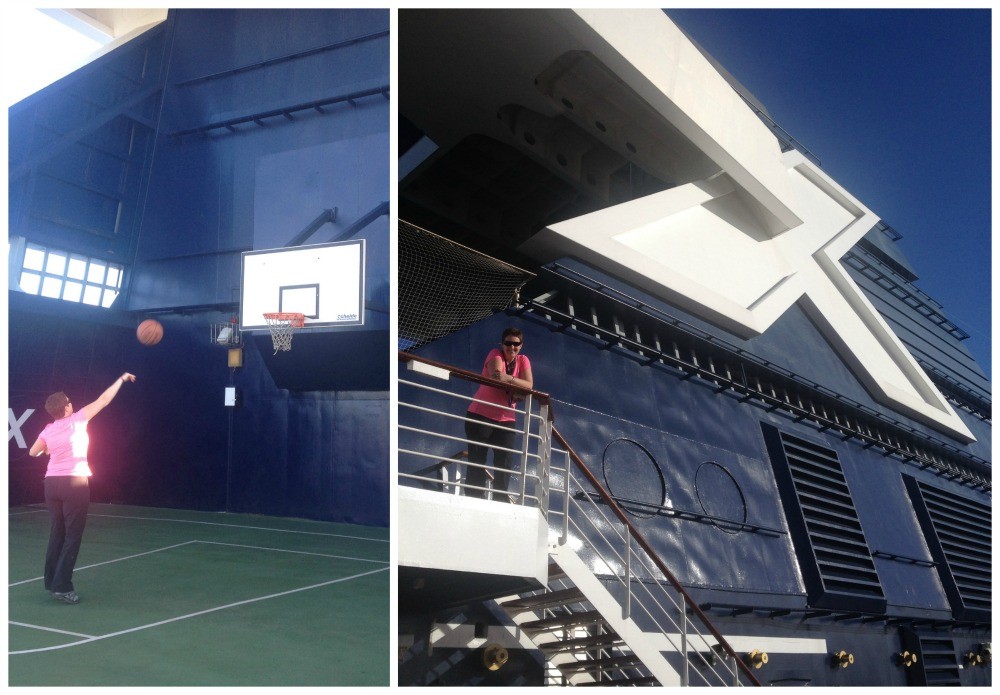 The Qsine speciality restaurant is also onboard, and in place of The Olympic restaurant on the Millennium is The SS United States, however the menu is identical to The Olympic. The price for these restaurants is $50 each per person, or you can get a 3 dinner pack for $119 per person.

There is also a variety of beverage packages which are being offered.

The lifeboat emergency drill was easy and very civilised, as our muster was in the theatre and we sat down to watch and listen to the procedure before sailaway from Fort Lauderdale.

After we found a couple of hopefully good books from the well stocked open 24/7 Library it was time for a drink, the question is which bar? With the sun out and it being warm we decided on one of the outside bars by the pool area.

The Constellation Lounge is a great place to sit and enjoy the view from the front of the ship and we continued our drinks here, the great thing about cruising is you can carry your drinks from bar to bar, in fact anywhere onboard. 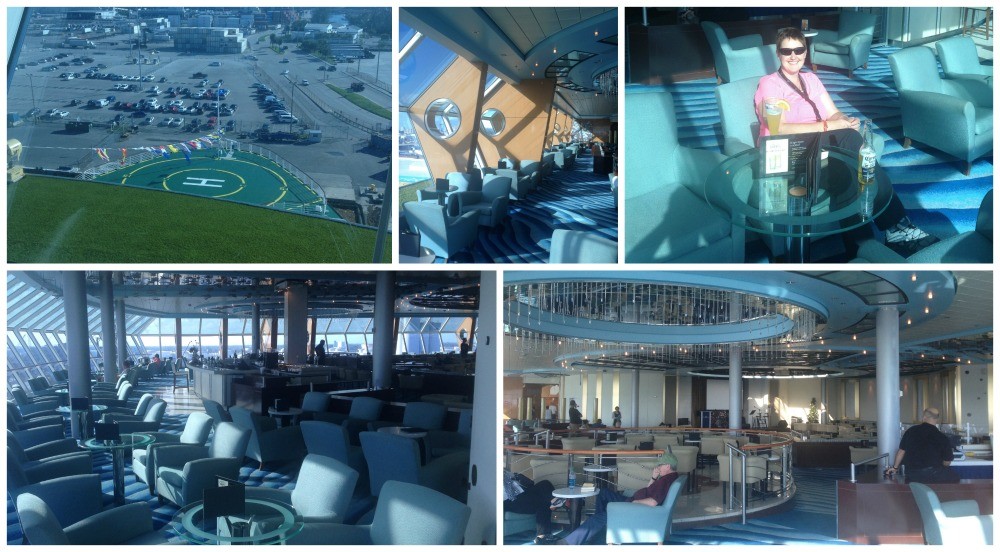 The two Princess ships had already left and the HAL Noordam was following us, the Silversea was staying in port. 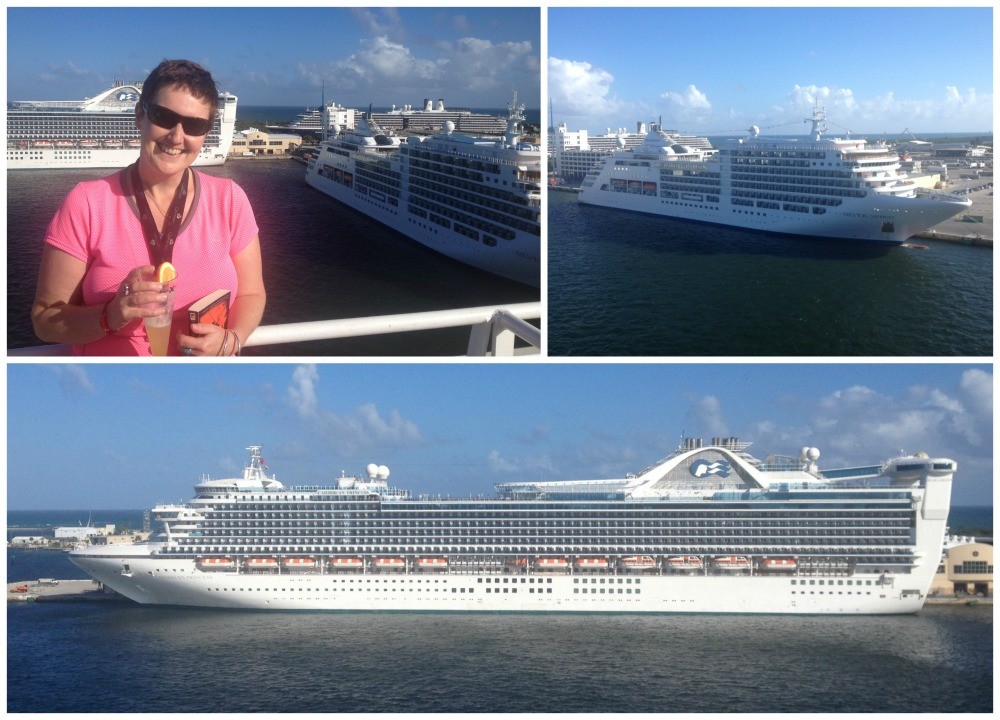 “Cruising out of Port Everglades in Fort Lauderdale”

The Port Everglades is not overly pretty, but the sail out was nice as we passed a few million dollar homes before the beach came into view and out into the ocean we cruised.

Once clear of the channel entrance to Port Everglades it was full steam ahead for the 1124 Nautical Miles to Cartagena in Columbia.

We enjoyed our beers as Miami faded away in the distance. 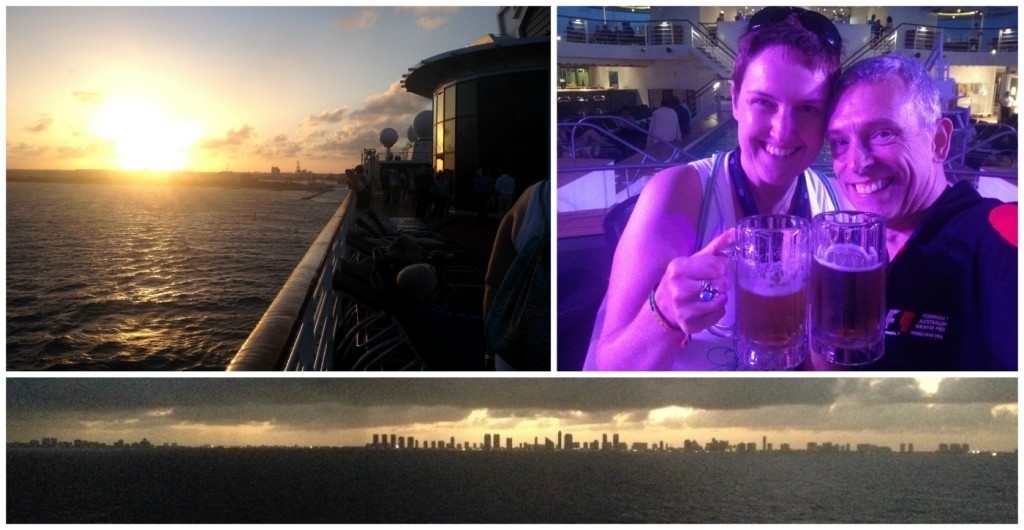 Florida, Miami skyline from the ship

Back to the cabin to unpack our bags as they had arrived earlier and were just outside the cabin.

With our select time dining option we can eat any when between 5.45 and 9.30 pm. We had booked this evening for 6.15pm as only earlier of a lot later was available.

Dinner was in the Trellis dining room which is very nice and set up the same as on the Millennium, we joined a table of six and enjoyed the evening with them, an American couple and an Australian lady with her grandson.

Dinner and service was very good and a nice atmosphere in the dining room. 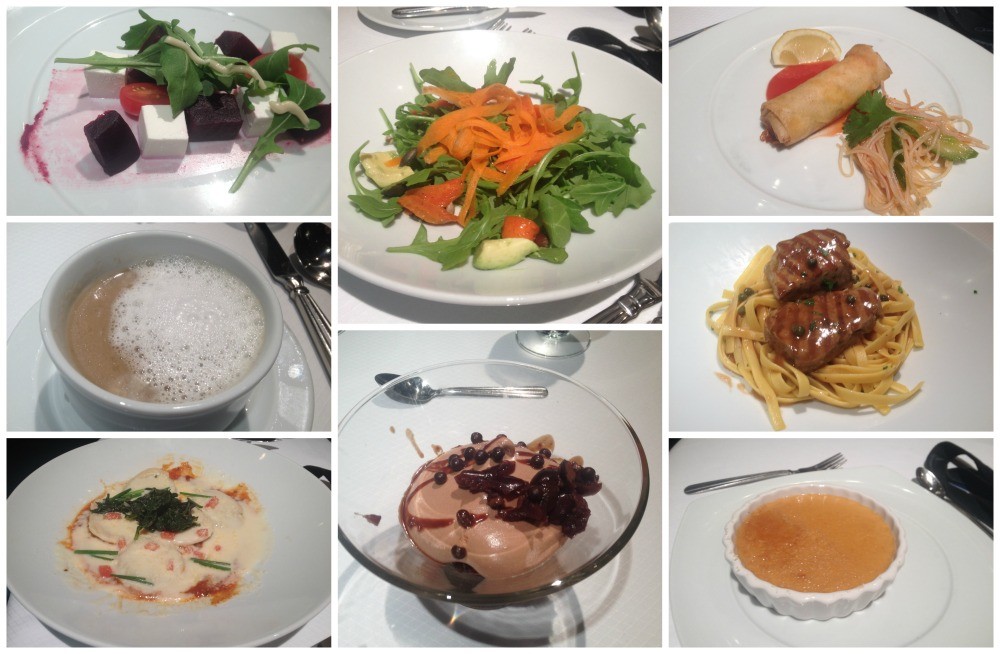 Dinner meals in the Trellis dining room on Celebrity Infinity

“Connecting to the Internet onboard Celebrity Infinity”

After dinner we caught the show before Moni had a coaching call to do on Skype. Signing up for the internet was easy and there is a variety of packages;

They do warn you that the connection will be slow and that Skype and FaceTime have been disabled. However they have NOT been disabled thankfully, I think they write it so you don’t use them as it will slow the band width.

Walking from aft to forward

After we headed back to the cabin to retire.