Panorama from the lift area in Salvador

We were up and watching our arrival in to Salvador from the balcony and the front of deck 9, before heading to the cafe for a coffee, it was very hot and humid this early in the day.

We decided to miss breakfast as we both were not that hungry especially after our large dinner the night before. And with lunch available from 11.30 today we decided we would have an early lunch before going ashore.

A quick change of plans

According to the daily program we should be arriving at 11am in Salvador, yet at 9.30 we could see the port and by 10am we were alongside and soon after the first passengers that were congregating in the cafe area eager to debark while we finished our coffees.

Waiting to get off even as we are docking

We made the decision to change our plans and skip lunch in return for going ashore asap and then coming back for a late lunch. We dumped our stuff back in the cabin and jumped the queue and got off the ship in quick time.

Salvador is the third largest city in Brazil and was the nation’s first capital.

We didn’t have a tour booked for Salvador and so we walked into town. Basically we exited the cruise terminal and faced a barrage of taxi drivers vying for your business, past a line of buses waiting for their passengers to take them on the ships tours. 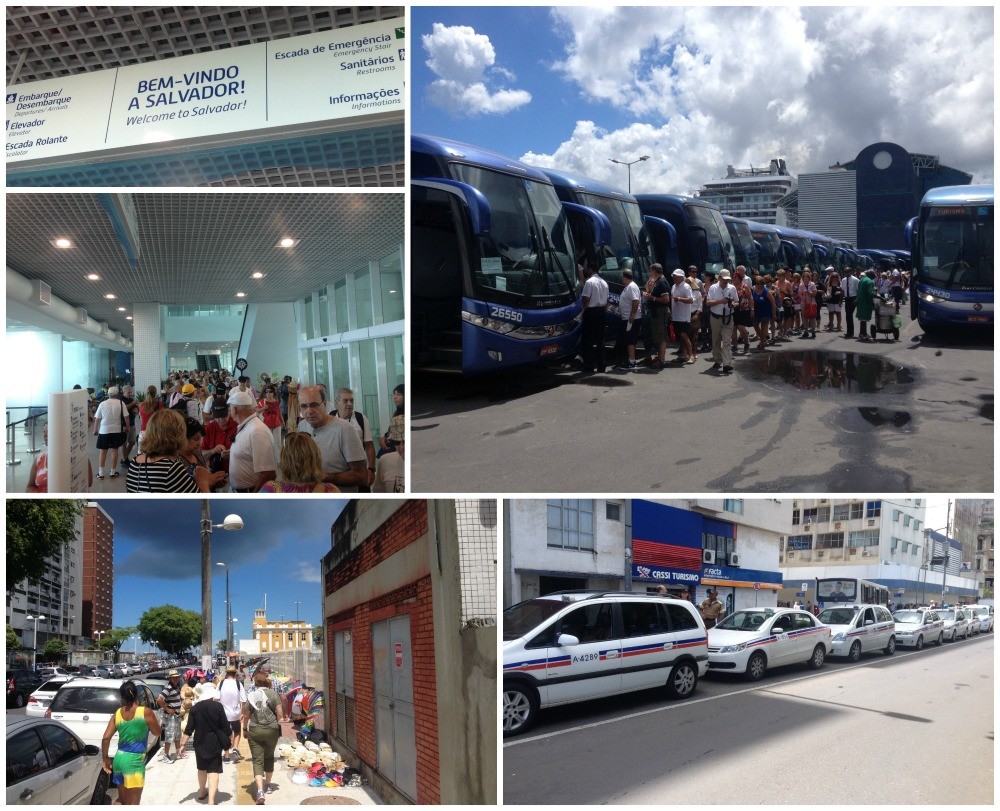 We continued along the road to the right as did many others and followed the road around past the market which we walked through on the way back. 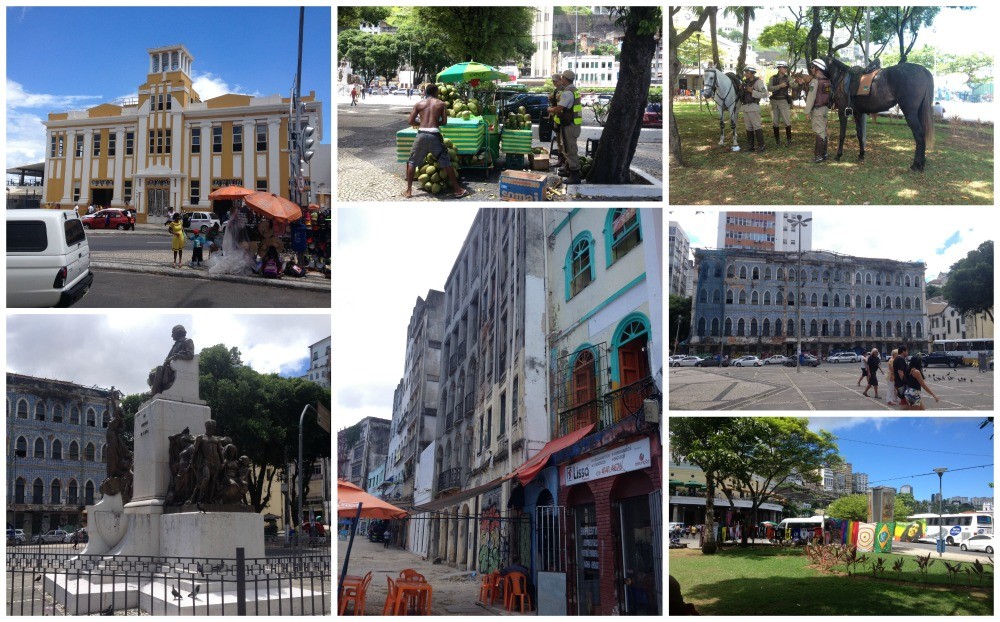 Salvador da Bahia on Brazil’s north coast was once a very wealthy city in Brazil and was home to millions of African slaves between the 13th and 18th century, thankfully today the slavery has been replaced by its fun-loving people, Afro-Brazilians whom have introduced their culture to the city through music, dance, art, food, religion and much more.

Many areas are still rundown and derelict looking while some new generation designs are appearing, and the city center like any other with high-rise buildings, however the most beautiful place to visit is the historical center called ‘Pelourinho’ and to get there you can take the ‘Lacerda Elevator’ or the ‘Goncalves Cable Car’. 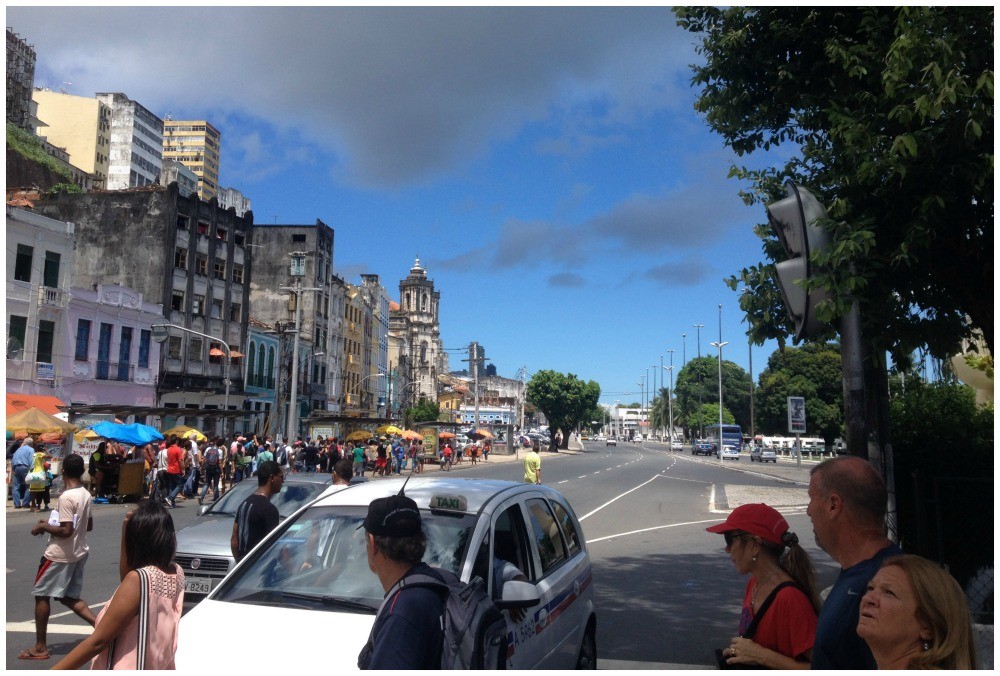 The elevator to Pelourinho

Over the road is the lift that gets you to the top-level of Salvador with its cobblestone alleys opening onto large squares with colourful buildings and many churches. 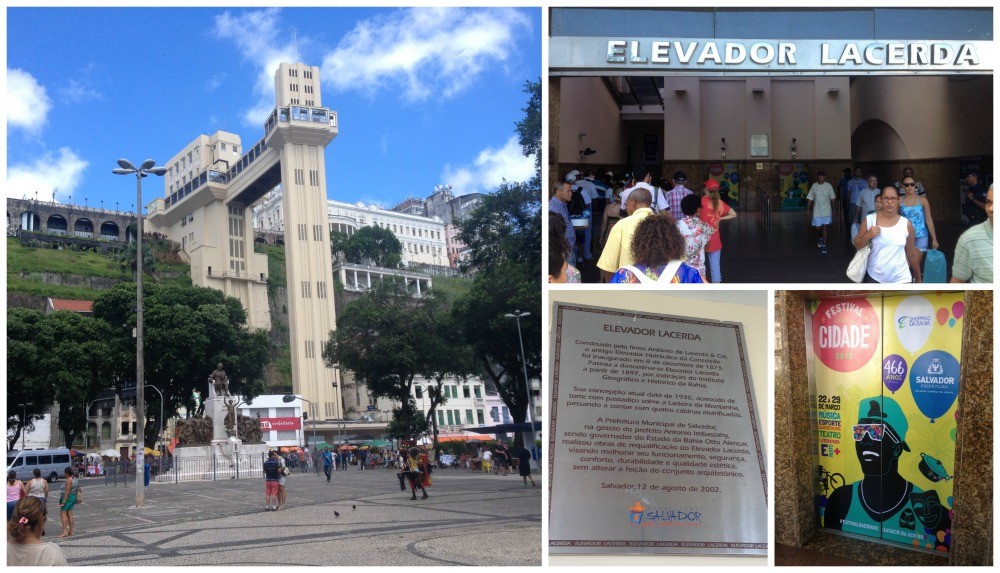 Moni haggled for some change

We didn’t have any Brazilian Real so Moni went next door and haggled with the owner to change some US dollars. 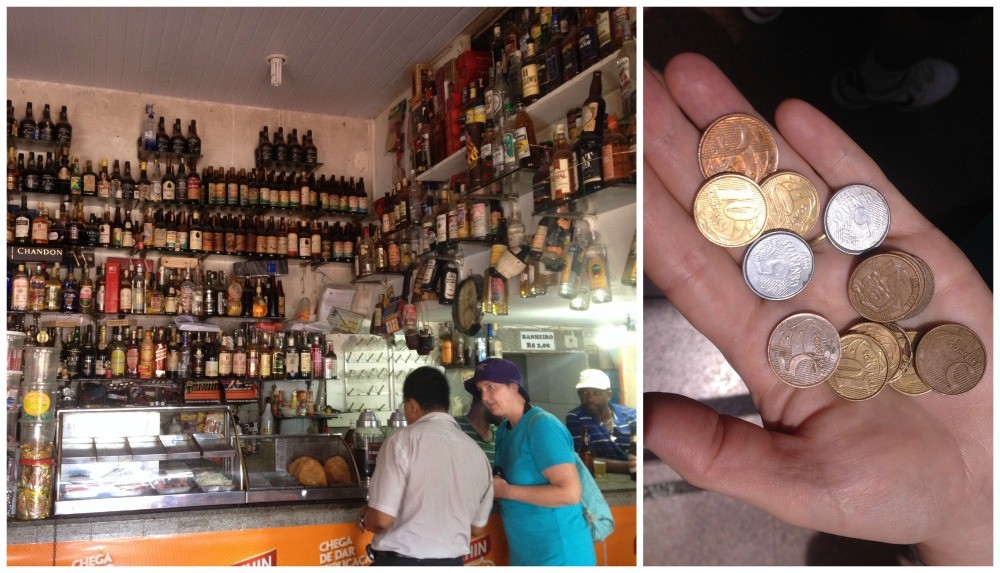 Moni making a deal to change some US dollars

With $20 USD changed we had some coin to pay for the lift (Lacerda Elevator) which cost BR 0.15 per trip which is not even 10 cents AUD so we had plenty of local currency to enjoy a drink later on. Great value when you consider some ships tours take you to the top as part of a city tour for a lot more!

Views from the top of the lift

As you can see, once at the top which is only a few seconds really you can take in the view over the city below and the surrounds from the windows around.

From here you exit into an open area where a huge yellow Salvador sign stands and the Rio Branco Palace is to the right. 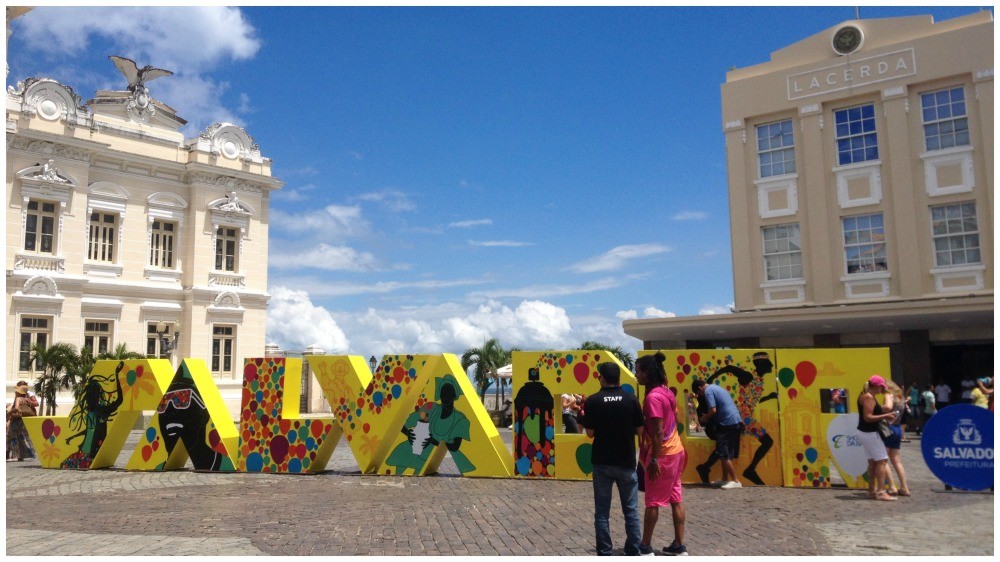 Salvador sign with the top of Lacerda lift behind

Did I mention that the Historic Center of Salvador da Bahia is a UNESCO World Heritage Centre, I didn’t know until I was writing this post, lol. 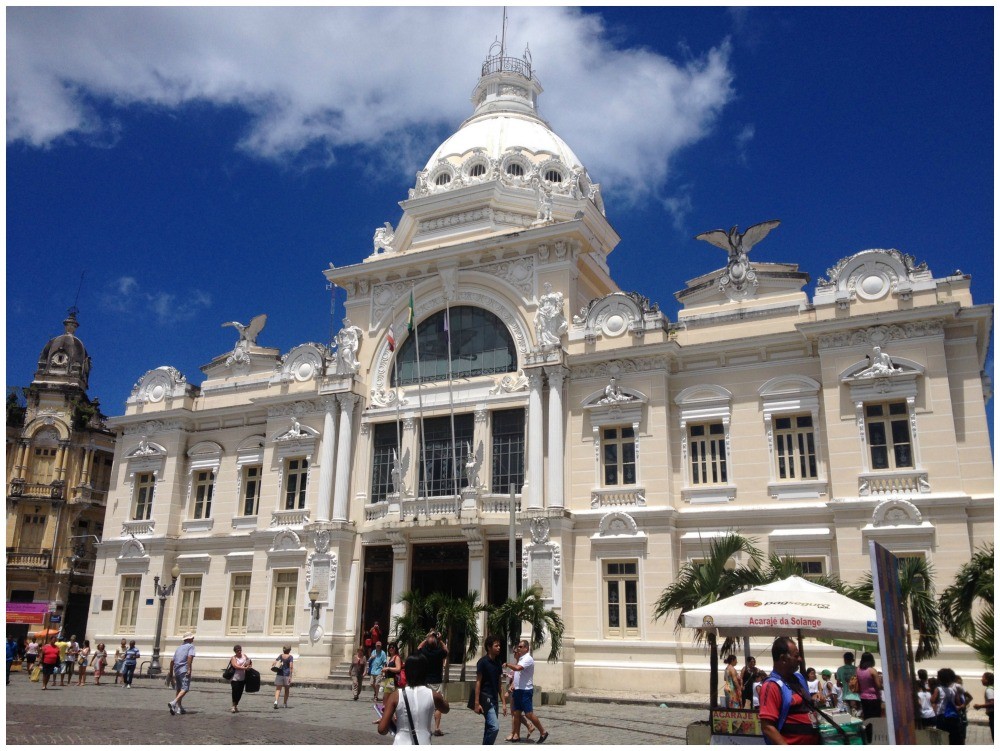 Rio Branco Palace at the top of the elevator

Having picked up a map from the tourist office at the top of the lift area we plotted our path. Walking away from the lift and slightly to the left up the road and a bit further to the left you can enjoy even more views over the port and the Fallen Cross (Cruz Caida) which is just off the main square called Praca da Sé (Sé Square). 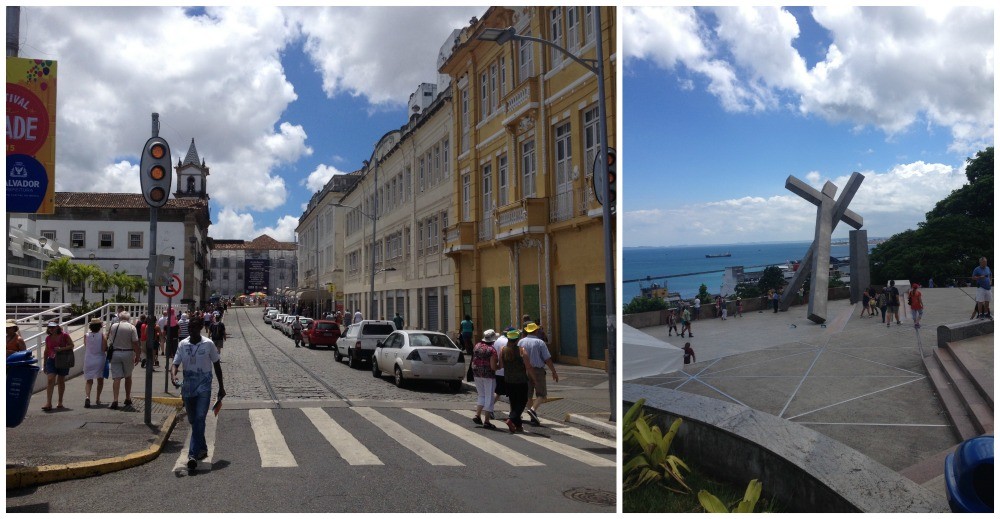 Walk down this road to the Fallen Cross

Turning right from the Sé Square you come to Jesus Square again another church. In this square we saw some locals performing the Brazilian Capoeira which originates from Salvador and is a Martial art that combines elements of dance, acrobatics and music.

You can walk in any direction and find beautiful buildings and churches to admire, even a few lady’s in traditional costumes.

Time for a local drink ‘Caipirinha’ and a Brazilian beer

In this street we decided to stop and enjoy the local drink ‘Caipirinha’ and a Brazilian beer while watching people, lots of tourists milling around.

Enjoying a local beer and Caipirinha

Continuing to explore the Pelourinho streets full of colour, local arts and crafts in the tiny shops each with hand-made signs hanging in front. Heading towards the Pelourinho Square you can see the towers of the Sacrement Church in the distance.

Below is one of my favourite photos that captures the colourful life of Pelo, even though my iPhone photo does not do it justice enough.

View towards Santissimo Sacramento Church from one of the side streets

As you can see lots of the streets connect and they all lead to the Pelourinho square, you could take anyone and follow it down.

Panorama of the Pelourinho streets

Standing in the Pelourinho square to the right you can see another church this one in a washed out blue colour is the Church of Our Lady of the Rosary and in the distance yet another called the Carmel Church, by the way, the Santissimo Sacramento Church is hidden behind the buildings on the right or we would have three churches in the one picture. 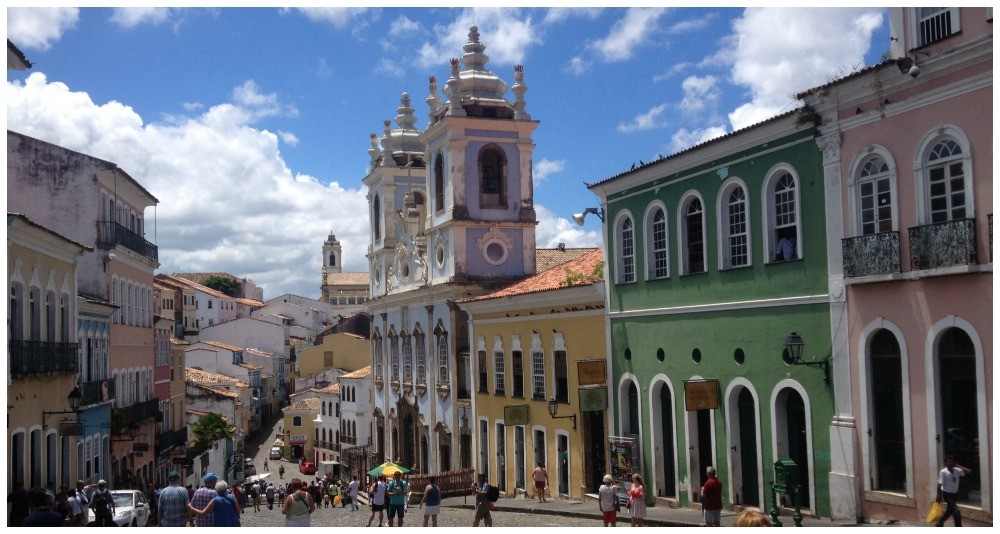 Church of our Lady of the Rosary in Pelourinho Square

Pelourinho famous for more than churches

There was no huge Olodum band playing in the streets today just a small group, but you could imagine how it was back then.

The balcony where Michael Jackson stood in Pelourinho Square

For those who want to re visit that time, here’s the video for you. Michael Jackson’s video to the hit “They don’t care about us”

Yet more churches and architecture of the past.

Time for us to head back and we made our way back through the streets of ‘Pelo’ as it is known to the locals. I love this photo how it shows the colours, the art, the buildings in the narrow streets. Hard to imagine that many years ago this was a place full of African slaves, yet today so much of what we see is influenced by the African culture.

Having taken the lift back down, walking through the streets here you can but notice the striking difference between the old historical center and the slightly rundown area below. 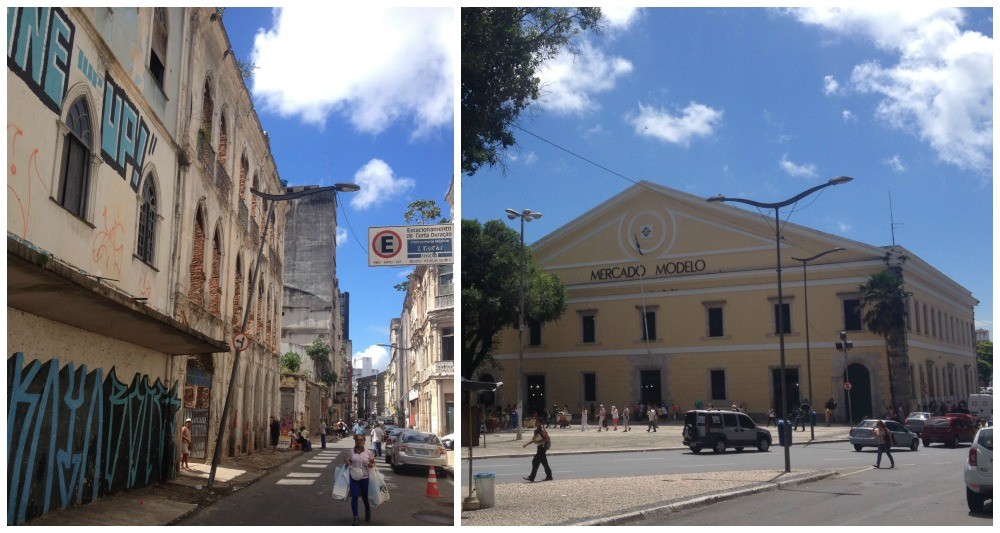 The markets were bustling with tourists and very hot. A lot of touristy souvenirs to tempt and we didn’t spend long in there.

At the cruise ship terminal we could see a group of passengers discussing something with local police, all a bit heated. Later on we found what was going on, apparently some passengers had been robbed in the streets today. We never felt that it was a bad area to be in, but I must add that we do try to blend in and certainly don’t walk off down a very quiet side street.

The ships staff that deal with the tours do make it quite clear that you shouldn’t wear any jewelery that makes you stand out. Knowing that, I still see plenty of tourists ‘done up to the nines’ with bling that makes them look like a walking jewelery shop and hence a prime target for those that prey on opportunities like that.

Add to that the age and physical ability of these tourists and you have a gold mine for robbers, especially in a city that is known to be the most violent in Brazil.

Arriving back onboard close to 2pm and heading to the restaurant only to be told it was closed from 1.30. Normally open to 2pm, but today was a drill and closed early to allow the staff to complete the drill. So up to the buffet we went.

After that we had a lazy afternoon before watching the MSC Lirica sail out from Salvador and about an hour later we departed.

Dinner at our table in the Quattro Venti restaurant 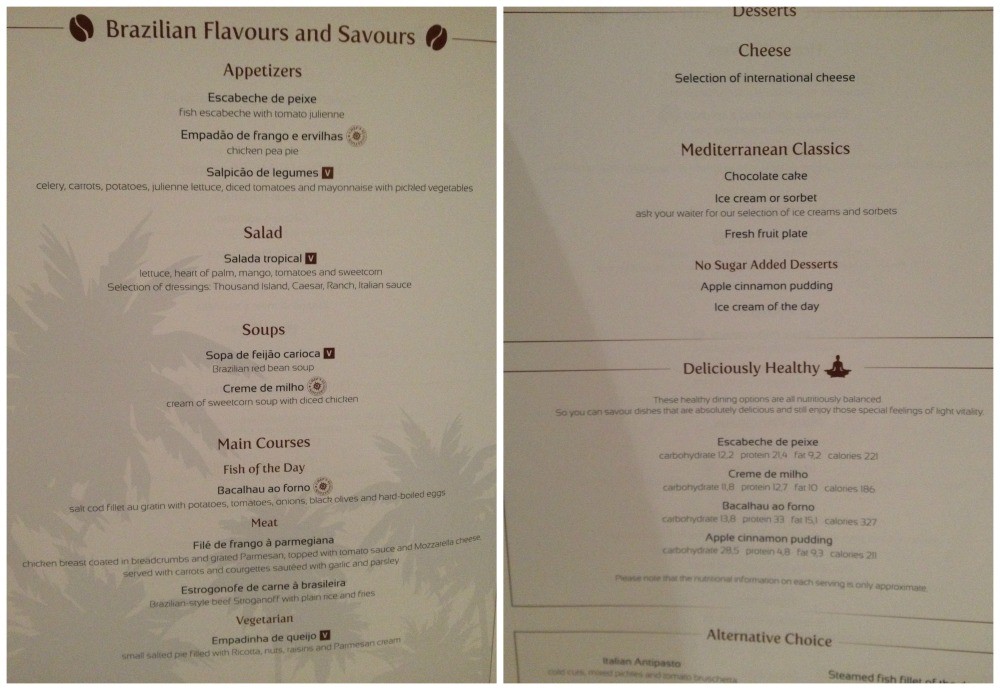 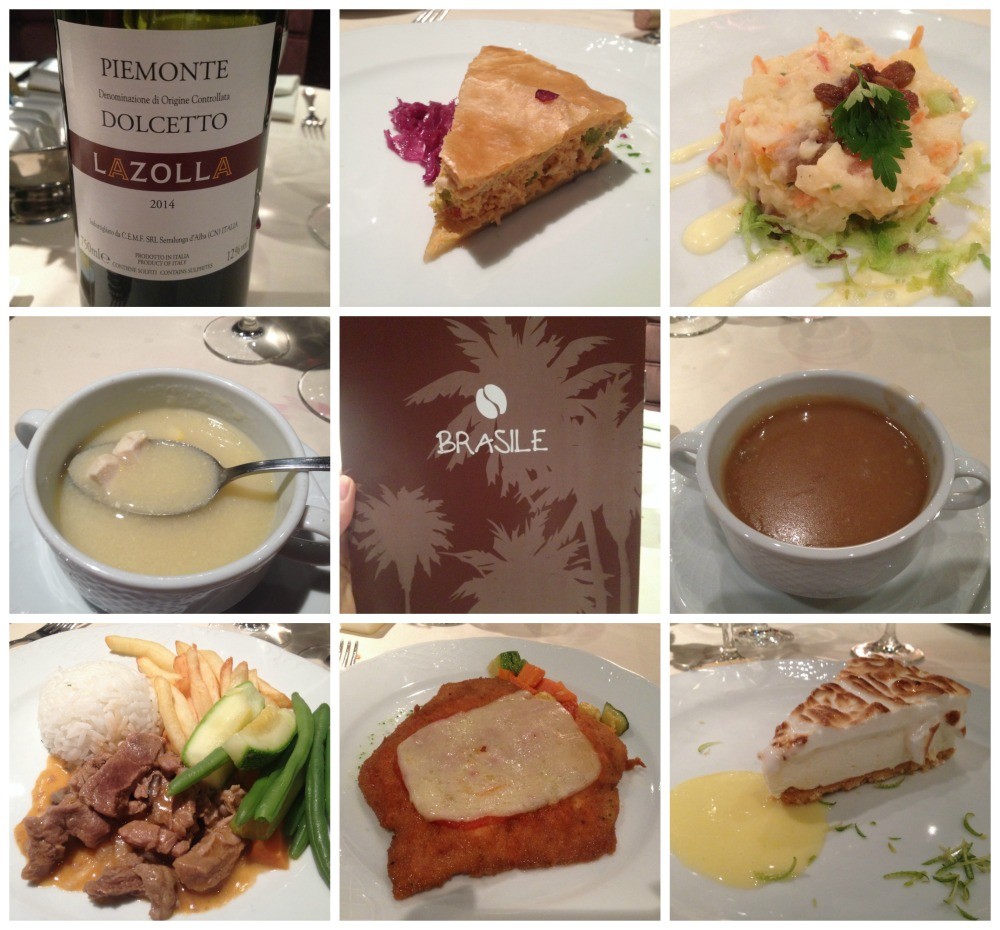