I woke to the sound of Moni talking to Maria who brought our morning tea & juice… I’d pre-ordered it for 7.30-7.45 and it was exactly 7.30am, the service is very very good.

So I enjoyed my tea in bed. Moni has a slight sore throat so no hot drinks for her. We freshen up and head down for breakfast in the Britannia restaurant and join a table of eight. When dining at breakfast and lunch you can choose if you want to dine with others or not, we love to meet new people at meal times and generally always join another table to have a chat.

This morning we met Toshi & Yumi from Osaka… We got talking and they loved our plans and were genuinely very interested in our journey.
Breakfast was fine, my omelette, hash browns and baked beans just what I like. Moni had eggs Benedict one of her favourites. We arranged to meet Toshi & Yumi for lunch @1pm in the Lido…

At the cafe for our daily coffee fix and bump into Toshi & Yumi, a small place but not really. This will sound strange, that even with 2000 passengers we still see new faces each day and ones we have met before, you can go days before you see them again. 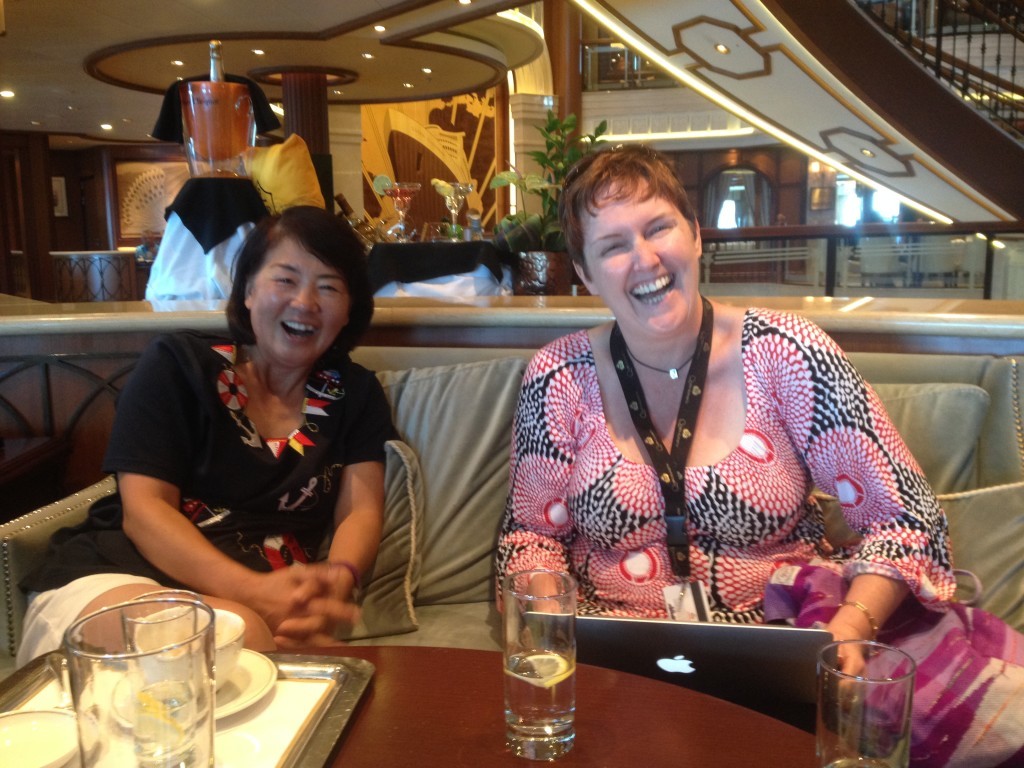 About an hour is spent chatting about Japan with Toshi & Yumi getting lots of tips. They are impressed about how much I have researched. I do tend to become a sponge for information once I find a topic or place of interest.

After, I leave Moni to check her emails and go for a wander. Stopping by the pub I spot the two boys from our table playing in the darts comp, unfortunately, I was a little late to join in so maybe tomorrow. On the way, I pass the Queens room where the daily dance class in well underway with the oldies breaking a move… Then I take a glimpse at the few high rollers playing Texas hold-em some with plenty of big coloured chips…100’s of dollars, not for me i’ll stick to my $1 bets. 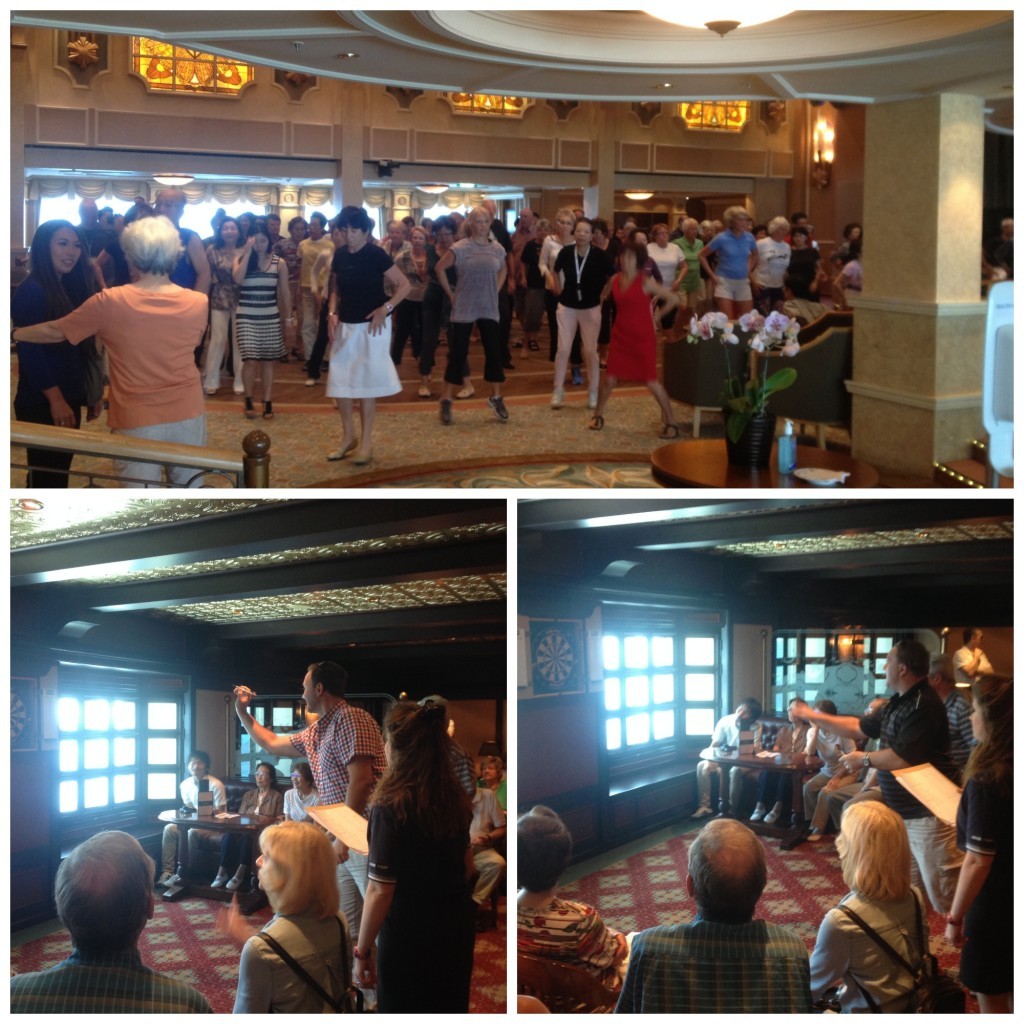 Lunch in Lido buffet was fine, busy but not mad. We chatted with our Japanese friends over lunch exchanged contact details and hopefully we will catch up in Osaka.

After lunch we take a rest in the cabin, I sort through some photos while Moni catches some zzz zzz. I later decide to go for a swim and bubble spa in the pavilion pool, as it is probably the last day of nice warm air temps as we are getting further north. Around 27 celsius or 90 Fahrenheit still and the water was beautiful. 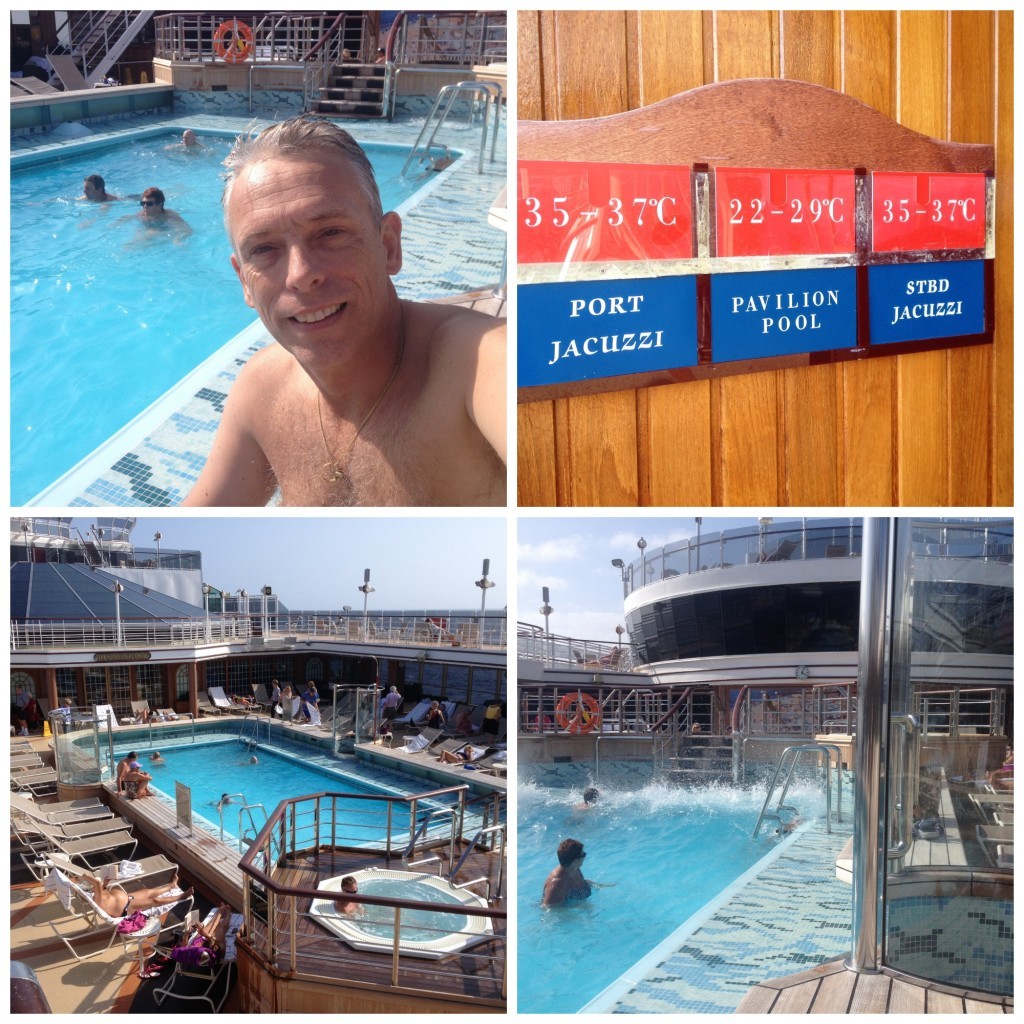 Enjoying the waves in the Pavilion pool

With the movement of the ship on the waves, the pool was just like a wave pool in sea-world just more unpredictable, great fun. A quick dip in the warm spa and then a cool shower.

Next, I wanted to see how the game of Croquet was played so I found myself on the games deck amongst a group of 25+ oldies getting ready to play in the tournament. After listening and watching, I’m now all clued up on croquet. They are a fun bunch of people with lots of laughter really enjoying life. 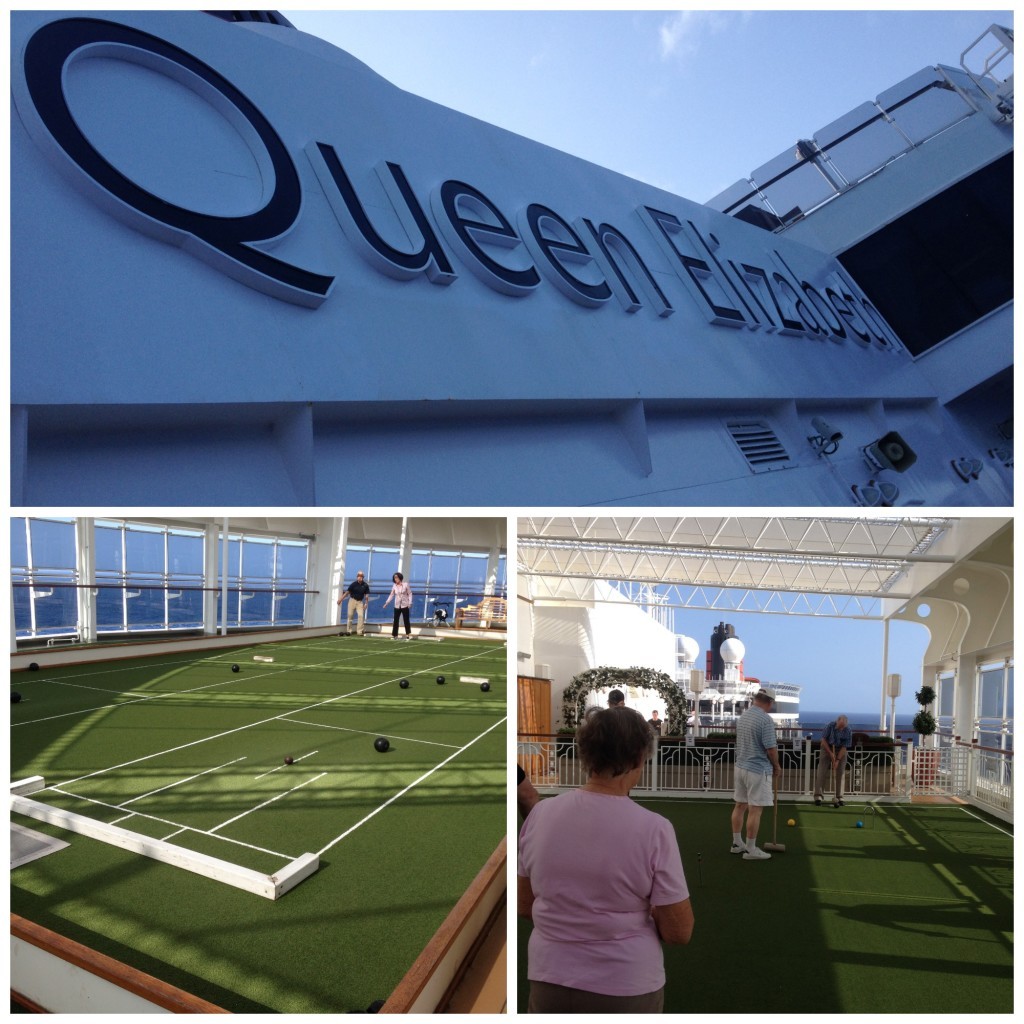 Back to the cabin to freshen up.

Moni is on the balcony with her laptop just finishing up a project for a client, which we then go online in the cafe to send. A quick stop by the shops to buy dickie bow (bow-tie) for me as tonight is our final formal night and I’d like to wear one for a change. The theme for tonight is Elizabethan. Back to the cabin where we get all dressed up for dinner.

Ready to head out in our formal attire to the commodore club for pre-dinner drinks, with canapés… The sun is glowing red as it sets allowing the night to close in, within minutes it is dark and Queen Elizabeth takes on her true glory with passengers all done up and the lights turned down, the Commodore club pianist plays tunes while the string quartet, the harpist, and other pianists entertain in various spots onboard. 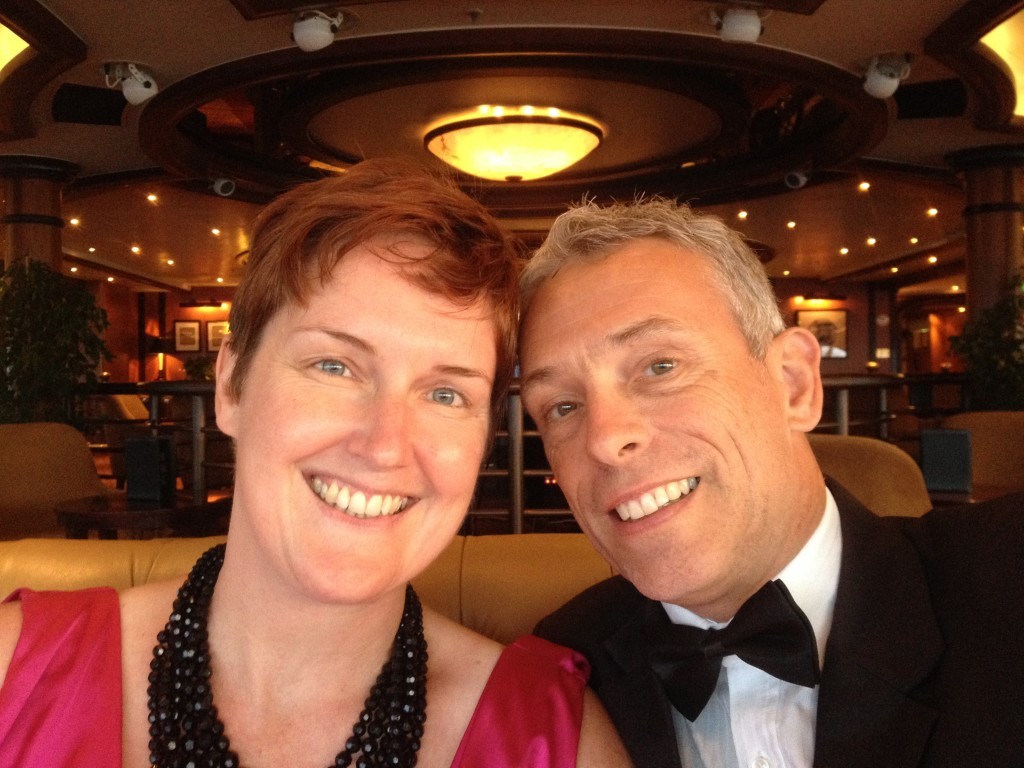 Pre-dinner drinks in the Commodore Club

We both enjoy these times very much and love to sit and watch people come and go. With it being an Elizabethan theme, a few are dressed up in the old fashioned style of high ruffled collars, long dresses (like curtains). I’m sure that they have been hired out before coming aboard. I hope so lol, I can’t see that they would get much use or I might be wrong.

Dinner in the Britannia was a fun affair tonight… We had a full table and a few days ago we planned to mix things up a bit for our waiters. After Ricardo had taken the orders and changed the cutlery when the two of them (Ricardo & Ivan) were not looking we all swapped places. 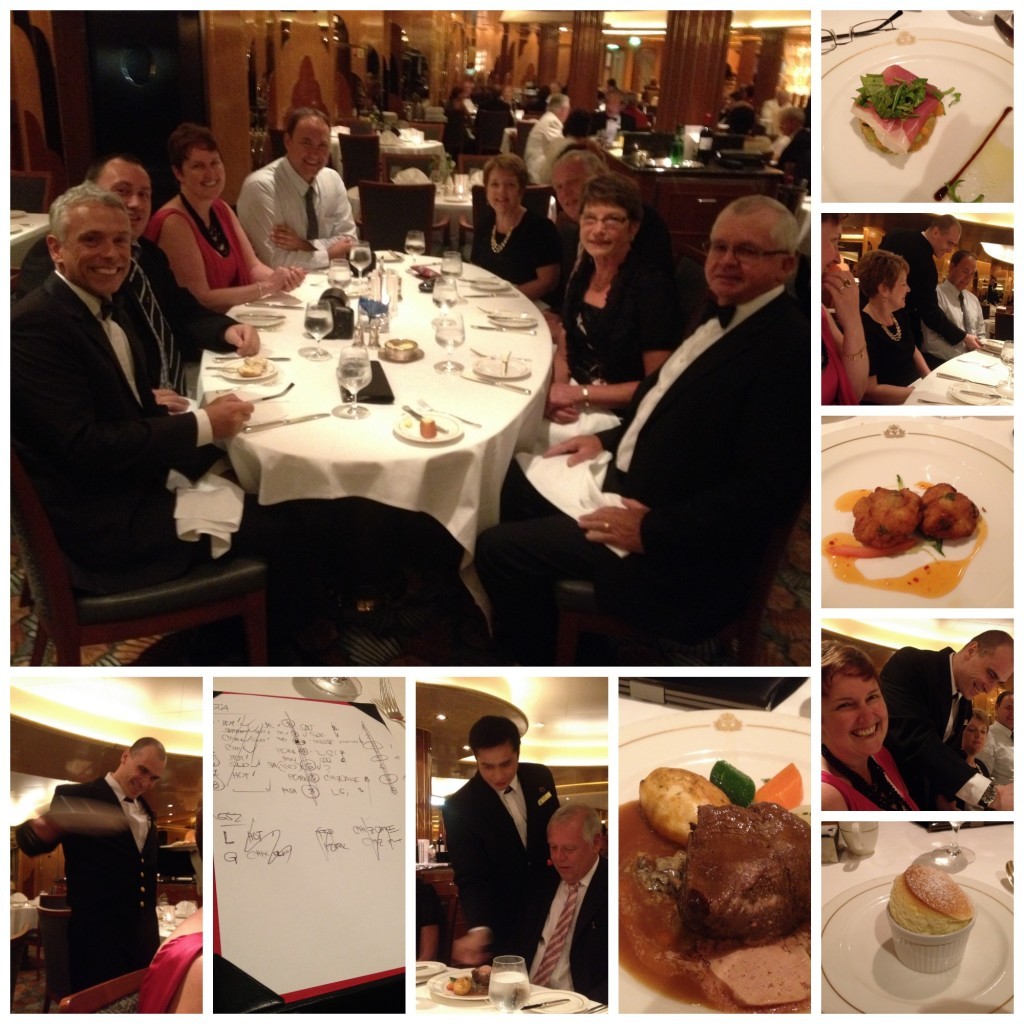 It was so funny when it came to serving our meals. They eventually got it right but it was very confusing for them both. The next courses were the same and each time Ivan became more lost… He was very funny with it and said in 13 years this had never happened and he will remember it forever. Their faces were to die for. The meals once again were fantastic.

007 Night in the Empire Casino

Next up was the Empire Casino with a 007 hour from 10-11pm, bond theme songs were played, and free martinis for all 00’s or 7’s on the roulette tables plus triple 7 on the poker tables. We had some chips from the other night so I placed my first numbers… Winner winner, 00 comes up and I more than doubled my money on the first spin, my Gin Martini with a twist came, happy days. 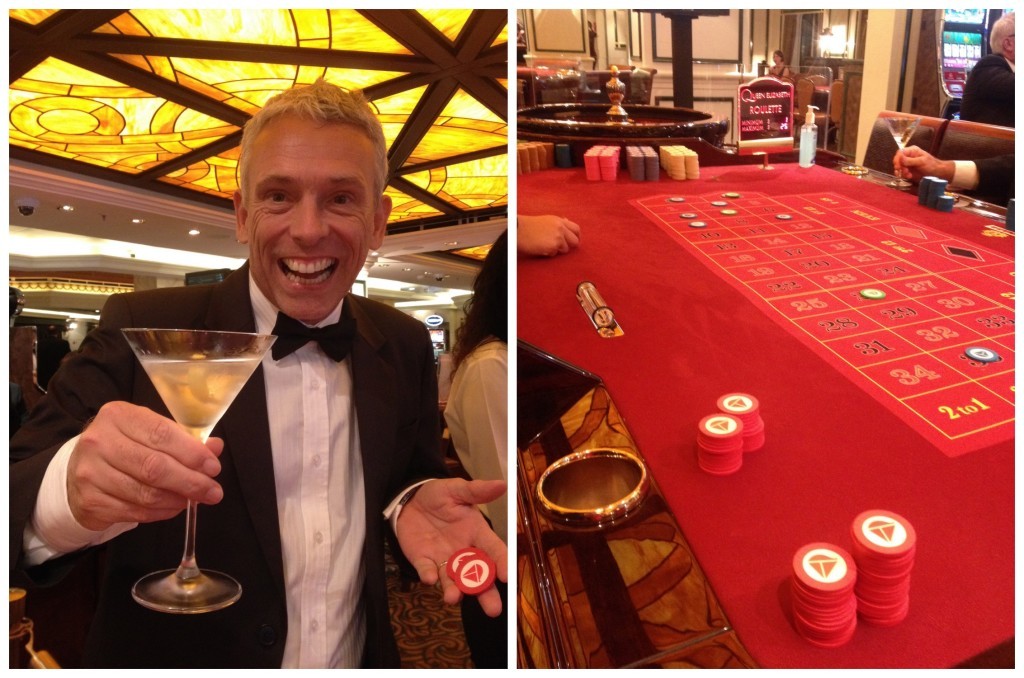 I was on a roll, but after a few more small wins, I began to loose, eventually I was down to my last chip, and then that was gone. I thought to myself I’ll put it on 00 again, even though it was gone 11pm and no more free drinks but I didn’t and guess what, 00 came up so I was out… Only another twist of good fortune, the gentleman opposite which had been winning and losing for a while was having lots of fun with myself and the others, he handed me a chip as I was out, saying it’s too early to go.

This chip I placed on double 1 (number 11) as my intuition said 00 has gone next is 11… the wheel spun, no more bets…. Winner winner 11 it was and so I was back in, typical James Bond style, lots of high fives and great laughter. However all good things come to an end and after one and a half hours of fun we left the table, $25 less off, but with a great story to tell of my James Bond 007 experience.

You Don’t Have To Be Rich To Cruise on Cunar...
Yorky’s Knob, so Close Yet Still so Far
Papua New Guinea lush And Volcanic
Goodbyes… and Hellos – MS Queen Elizabeth he...
Good Bye Queen Elizabeth… Ohayou Gozaimasu Y...