To get to Park Arvi from Envigado we walked to the metro station and took the metro 14 stops to Acevedo station. You can see a map of the metro here.

“The Metro Cable in Medellin”

To get to the metro cable from there is simple, just exit the station to the left and at the top of the stairs turn right and you can’t miss the metro cable visible to you as it makes its way up the mountain.

The Metro Cable in Medellin

The metro ticket that you need to buy before entering the metro will also include the metro cable up to Santo Domingo so just join the queue and enjoy the ride. Once you get to Santo Domingo you will however need to change cable cars and buy a ticket to continue on to Parque Arvi.

The metro cable up to the park Arvi via Santo Domingo

Our cable car with the three of us in was great, for the 6 seconds before a family of 5 joined us which made it near impossible to move around and make any photos. Be aware, Sunday is a busy day to travel in Medellin. These are some of the photos we took, with better ones on the way down, also the sun was out by then aswell. 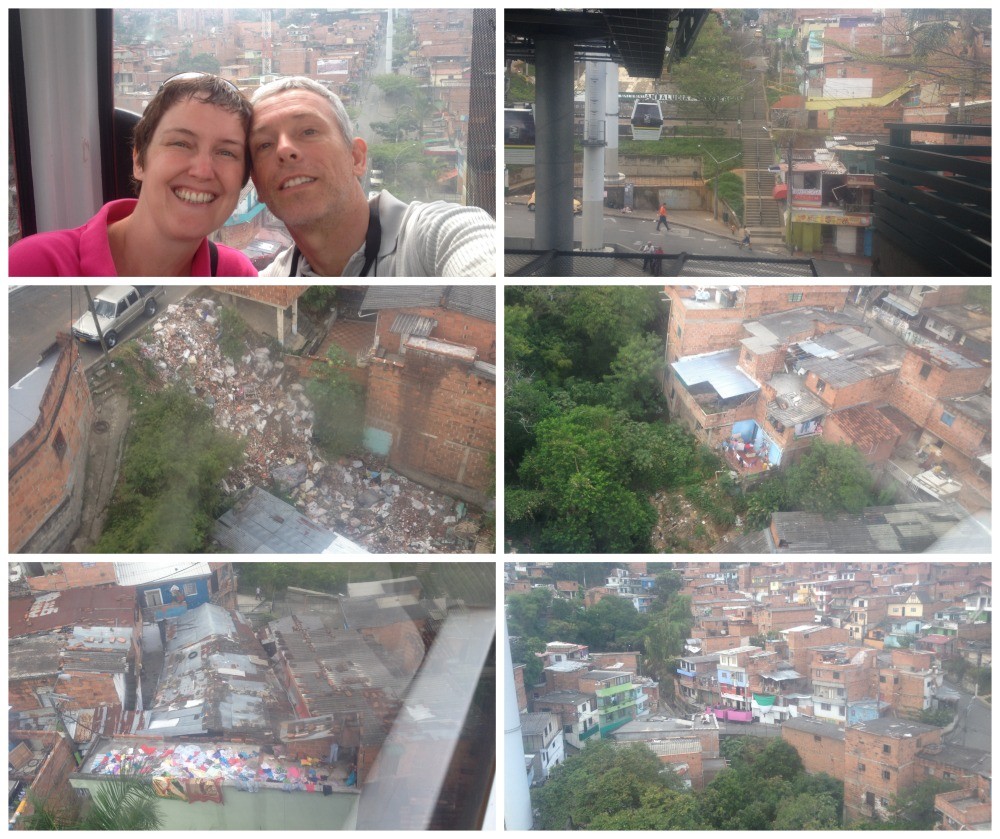 The metro cable ride up to park Arvi

As you can see the metro cable travels high above some of the poorest pueblos in Medellin a very sad sight indeed yet the locals seem to be very positive and quite happy.

There are three stops on the way up, the first is Andalucia followed by Popular with the end station being Santo Domingo where you have to change cable cars if you wish to continue on up to the Park Arvi. Pictures of this station are coming up later in this post. 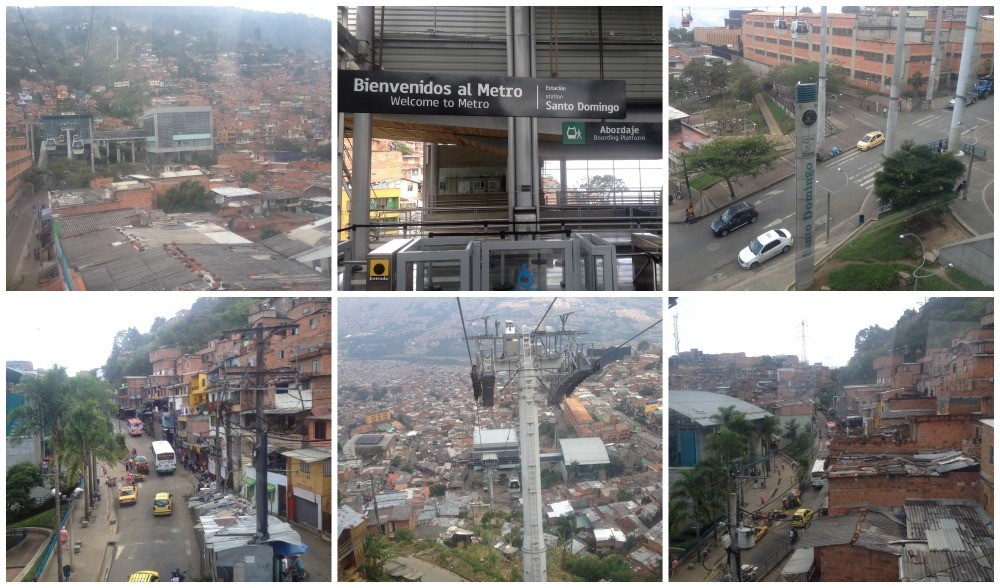 Arriving at Santo Domingo station about half way up

At Santo Domingo you get off and walk across a connecting enclosed bridge to the cable car that goes non-stop to  the park. The cost for this ticket is 4600 peso $2.60 AUD per person one way and the ride takes about 10 minutes. 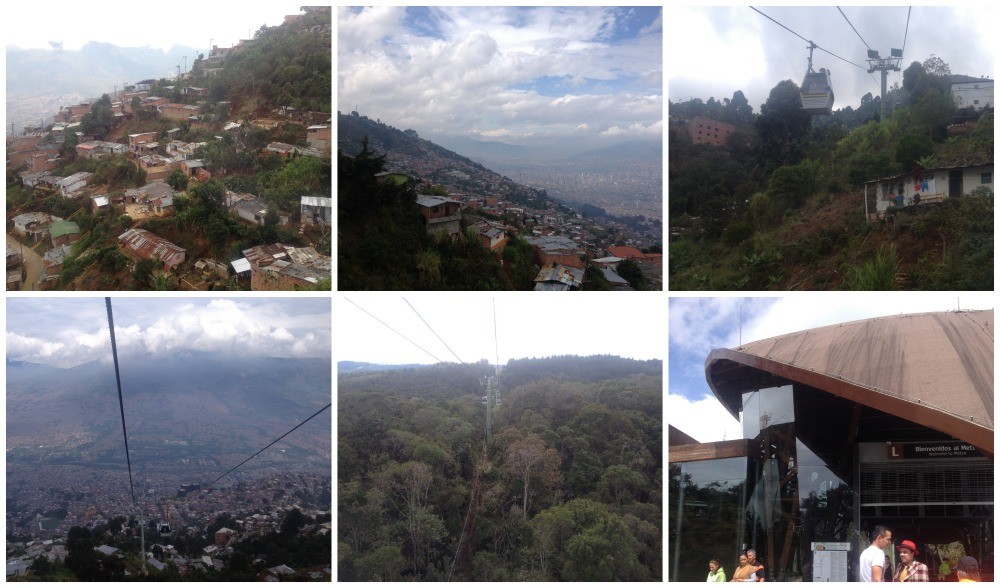 We got out and what greeted was a marque with locals selling all sorts from snacks to jewelery to wine… we had a stroll around bought a few snacks and continued on to a park information hut. A very helpful lady explained to us what was going on in the park. Apparently today was the 60th birthday for a part of the park and she said it was very busy so we chose not to go to that part, in this park you pay a flat fee which allows you to partake in the activities.

The other place was the Parque Ecologico where you pay entrance and also each activity separate, here’s the catch, you have to pre pay at the entrance, a very strange procedure which not only causes a build up of people waiting to get in, I bet they miss out on those that are unsure what to do.

She explained that we could walk around and catch the free colourful shuttle bus that runs often. Also that there was a guided tour in Spanish only which you HAVE to take if you want to walk that particular part of the forest, the walk is a three-hour return and has apparently great views of Medellin city below. They go twice a day and we had missed the first, the second being at 1pm.

“We decided to walk to the Parque Ecologie”

The path led us out to a road and we turned left to follow the road downhill. By the way, they don’t have maps, you have to take a photo of the laminated copy at the information both!! It took about 45 minutes and the you just follow the road and you can’t miss it. The colourful bus passed us once on the way. 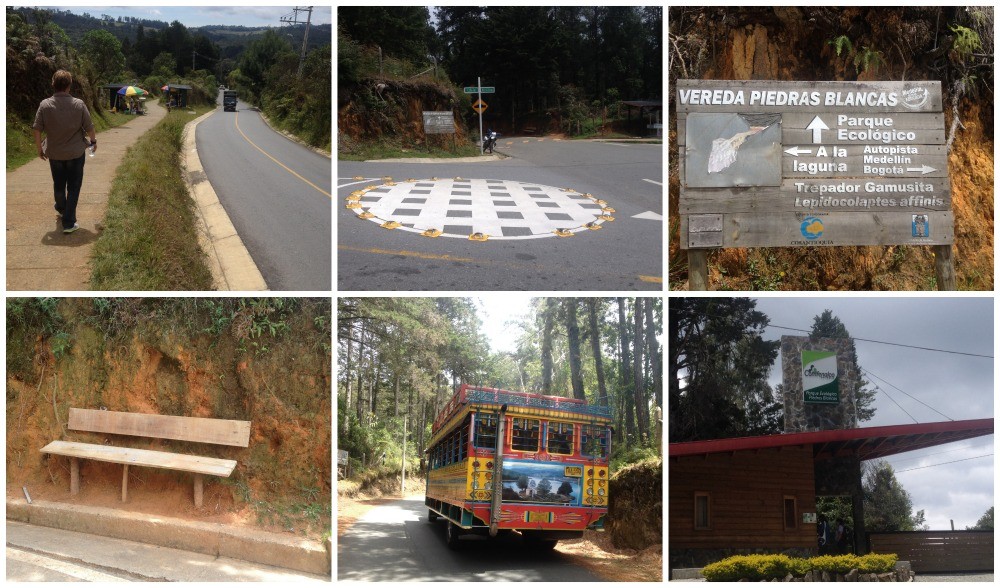 The walk was nice and mostly downhill all the way. At the Parque Ecologico we paid our general entrance of 4300 peso $2.44 AUD per person, very cheap.

The prices vary for activity, paddle boat, zip line, butterfly enclosure, and one ticket included lunch, that’s what we understood at least. Note that none of the prices or descriptions are written with any English translation.

Walking in are few signs pointing you in the directions of various things, we walked to a lookout and then passed the zip line which was nothing impressive then on to the restaurant were we had some lunch. The menu del dia at 12,600 peso $7.15 AUD each, expensive for Colombian standards and average at that.

Inside the Parque Ecologico

After lunch we walked around for a while, not seeing much that was noteworthy to keep us excited, it’s rather like a picnic area for families to relax for the day. The Butterfly enclosure was quite small even though we only walked in and out again, not having tickets. 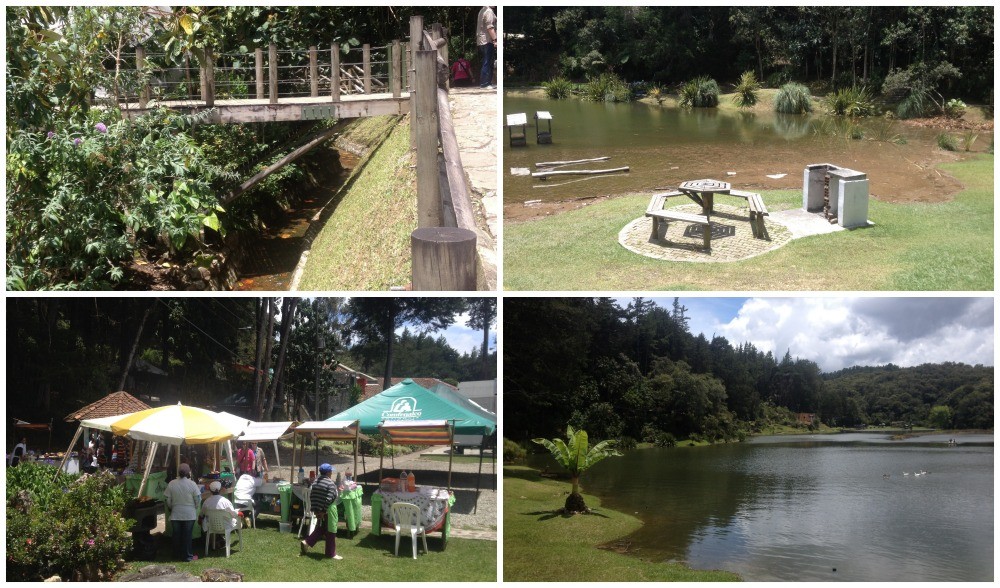 We exited the park and waited for 10 minutes for the bus to take us back to the top. Our walk was much quicker in the wheeled transport and at 1.10pm we arrived back at the entrance to late for the guided walk, which made the decision easier about whether to go on it or not.

Taking the big colourful bus back to the Park Arvi entrance

We read some of the information plaque and stumbled around the stalls again before we bought tickets to return to Santo Domingo station, not overly excited with Park Arvi. Each of agreed that the highlight of the day so far was easily the metro cable ride. 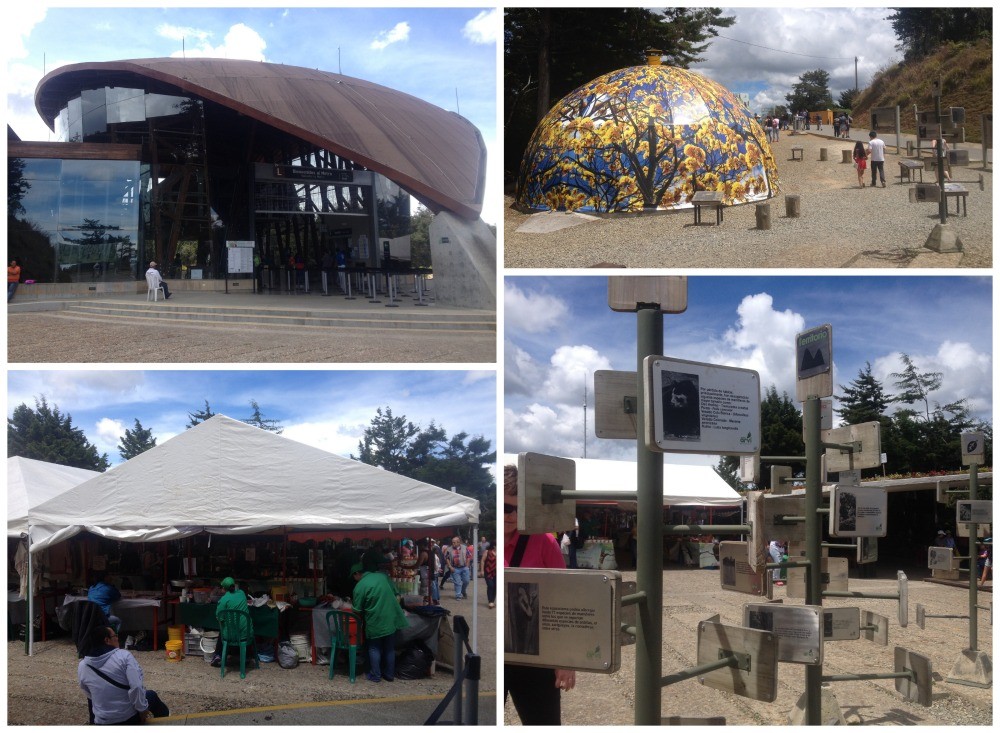 By now the sun was making brief appearances through the clouds which made the ride down even better. The views from the metro cable are awesome and well worth the trip even if you only go to Santo Domingo station. 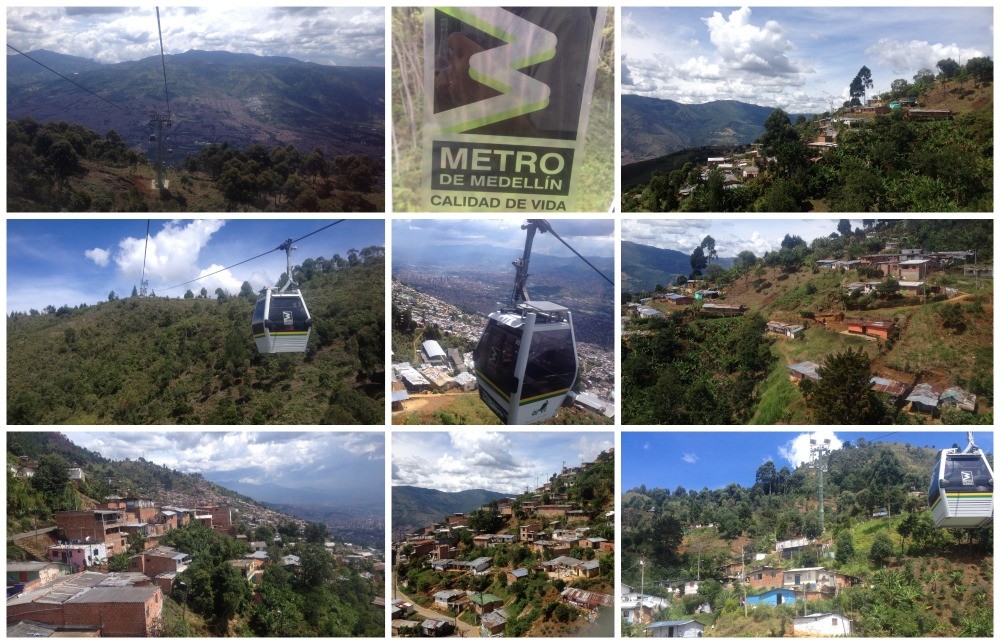 Returning to the bottom by the metro cable

“At Santo Domingo station again you have to change cable cars”

This time you must exit the station and walk 25 meters or so up the road and enter another station where you then buy a normal metro ticket for the regular price of 1900 peso $1.10 AUD per trip which will allow you to travel on the metro all the way back to Envigado. 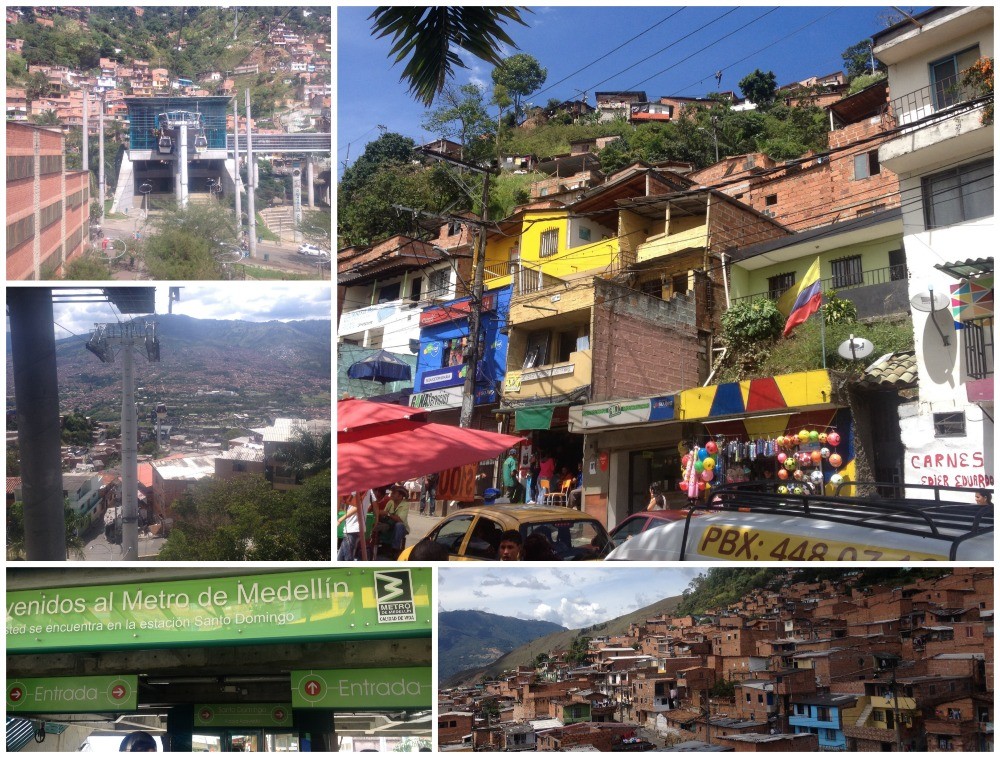 The change at station Santo Domingo on the metro cable

The streets were very busy and colourful and from here you can clearly see the cable car and station as well as the poor parts of the pueblo. 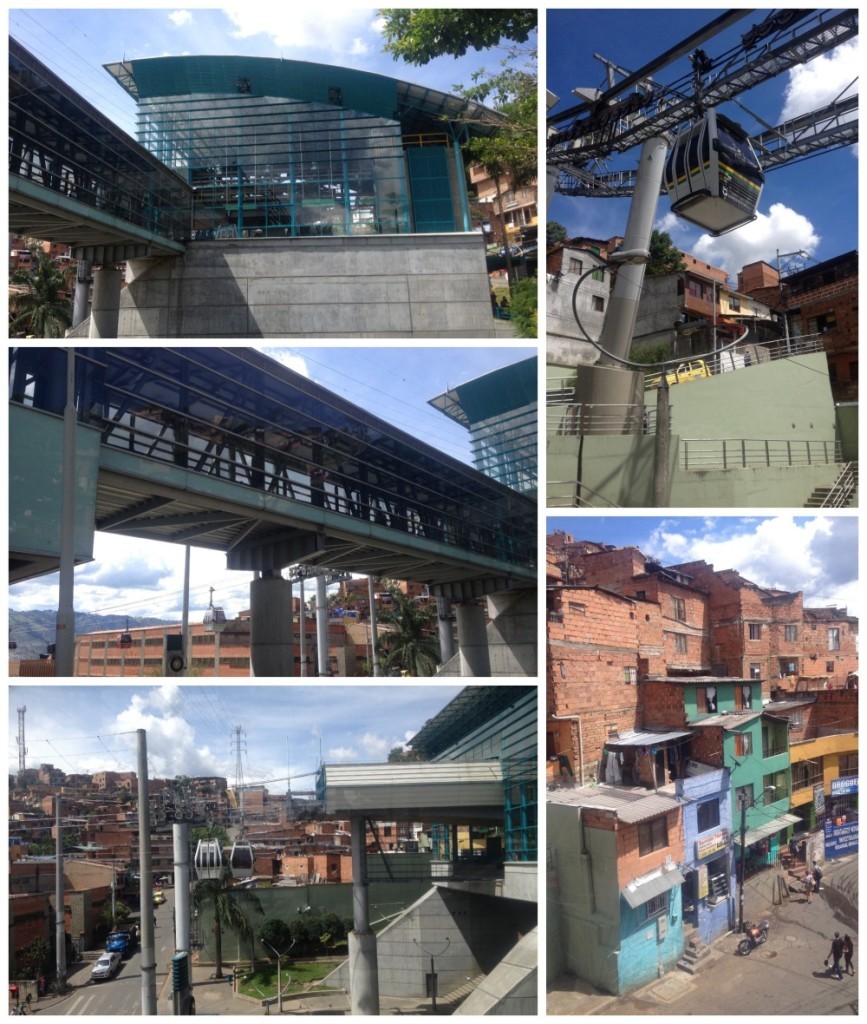 The ride down in fine weather clearly showed the poor parts and history of this city. Even though Medellin was name the innovative city of the year in 2012 and a worthy title holder it has many places that still remember the darker days.

The really good thing is that the people here focus greatly on the future and not the past and see things in a very positive way which shines through in their smiles, generosity and happy nature. I respect them fully and just hope the rest of the world can take Medellin as an example of a place that bounce back or begin again for a better word a bit like Hiroshima after the Atomic bomb disaster. 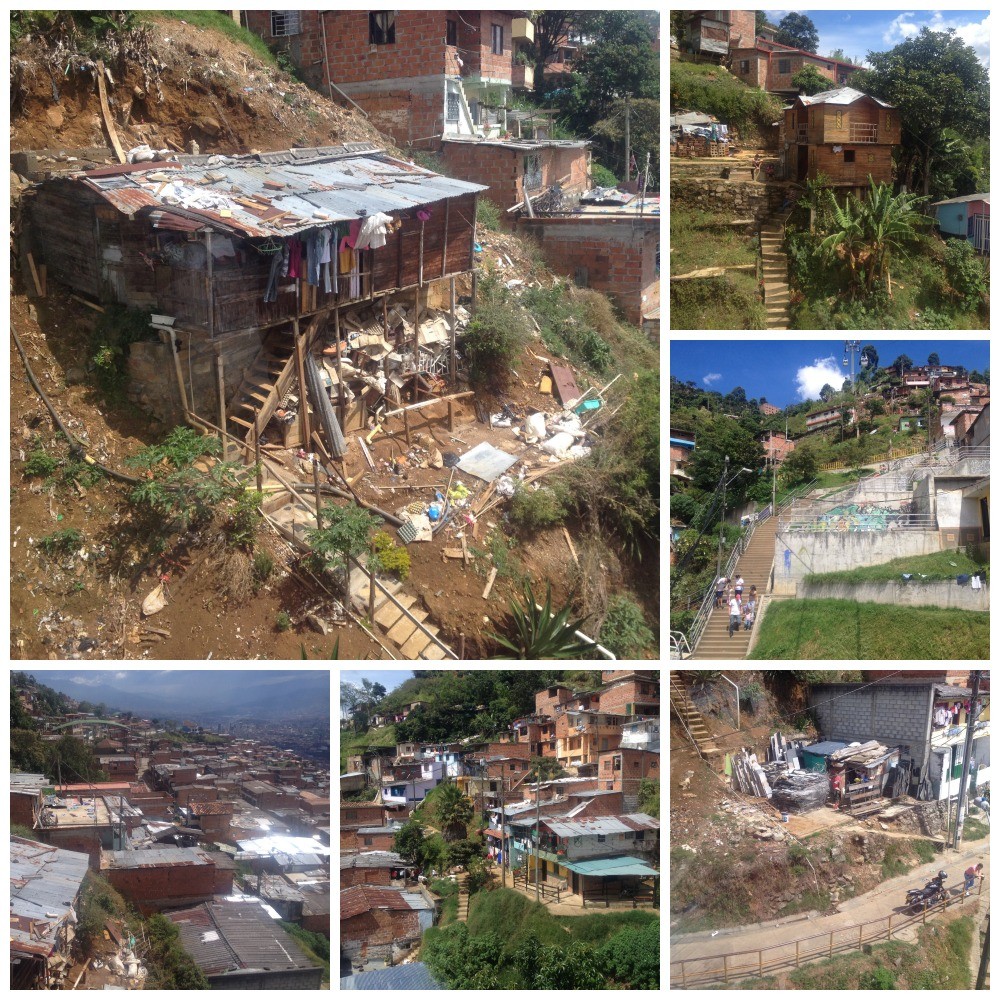 The very poor area of Medellin

The metro cable finally curved its way around the carousel at the base station Acevedo where we got out and caught the next metro back to Envigado.

The base metro station Acevedo

“The metro passes along side the Medellin river”

The river which is unfortunately very dirty, it’s used as a dump for everything and is in desperate need of some attention, the good thing is, that the city has started to take action to clean it up, a big job I feel.

Medellin is a city that is growing in stature every year and building projects are visible in many areas, who knows how this city of vibrant colour and life will be in years to come, my thoughts tell me it will be a must see place on everyone bucket list sooner than later.

However, is Park Arvi in Medellin Worth it or Not? We will leave the jury open on that one as we will give it another chance on a weekday and do the 3 hour walk and check out the rest.