When visiting Liverpool for the first time I just had to take a tour of the iconic Anfield Stadium the home to Liverpool football club.

If you don’t have tickets to an EPL game or a Europa League match it would be the next best thing but lucky for me I had secured matchday tickets and so this was an extra bonus. 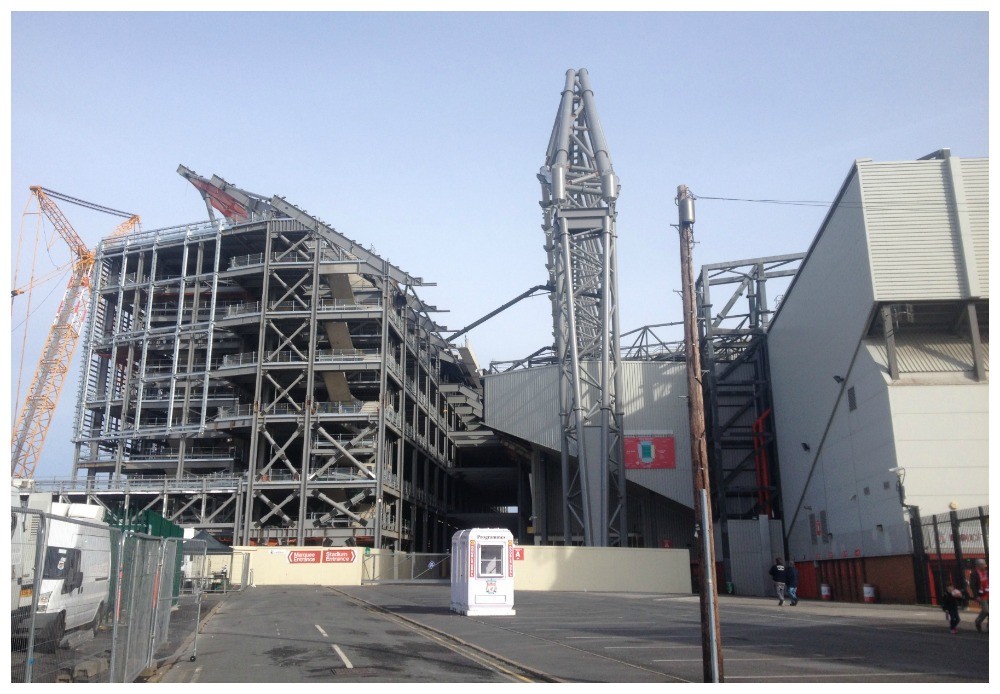 The stadium expansion to the Main Stand in progress 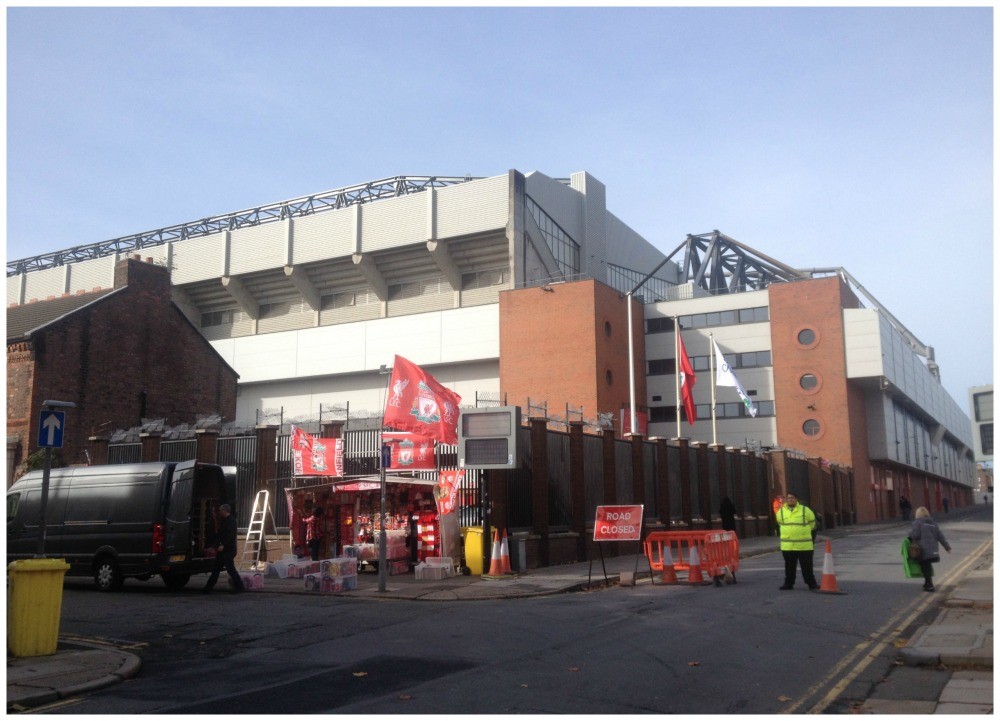 You can book stadium tours for various days & times, just check online at the LFC website for details, choose your tour, pay the fee and print out your ticket of course don’t forget to turn up.

I had a tour on a matchday which is slightly different from a day without a game going on, again the details about the stadium tours is on the website. 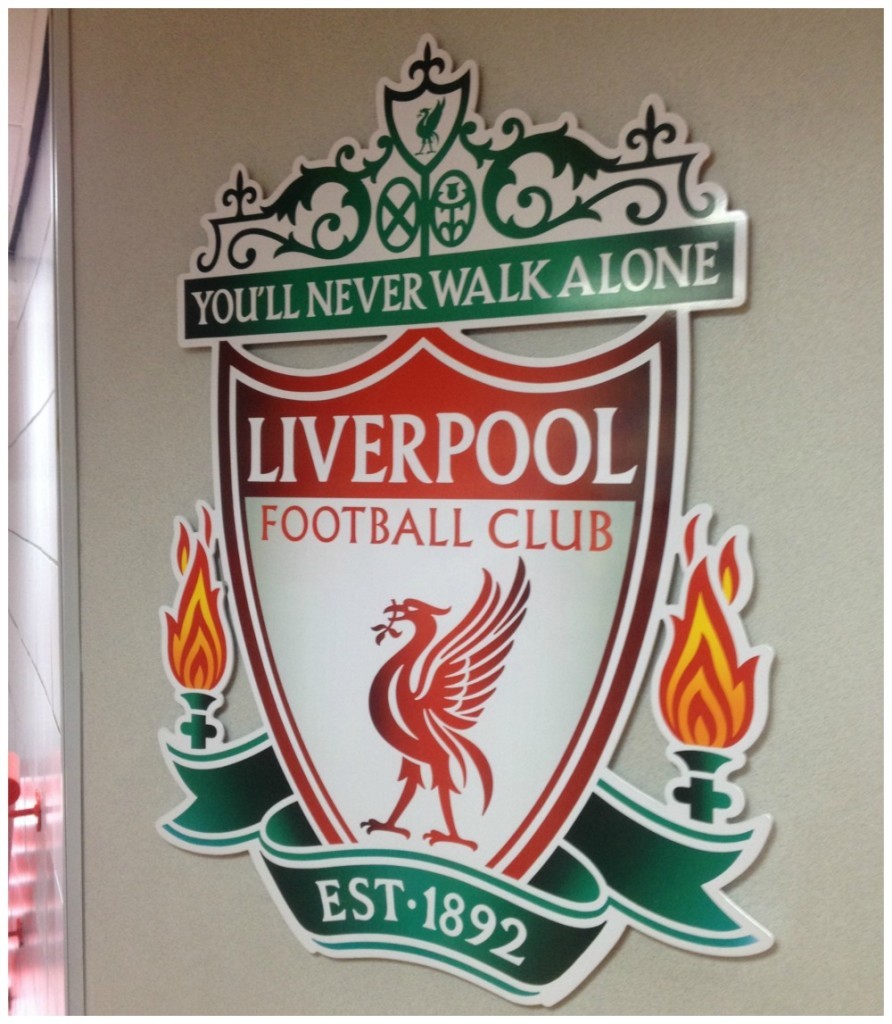 LFC badge on the wall at Anfield

My tour was at 12.45 which was the last tour for this day. I was at the ground early having been given a lift by a friend who was spending the day with Moni (not too keen on spending three hours at a football ground) while I enjoyed my football tour and match the entire day.

I presented my print out ticket and in return received a small piece of paper receipt for the 12.45 tour. I then took a look at the LFC Story & Gerrard collection.

Here you can find memorabilia that goes right back to the beginning of this famous football club steeped in history. Old kits, photos, program’s etc, all on display as you walk around at your own pace. If you want some extra commentary on this LFC Story, headsets are available with audio from Phil Thompson one of the old Liverpool players. 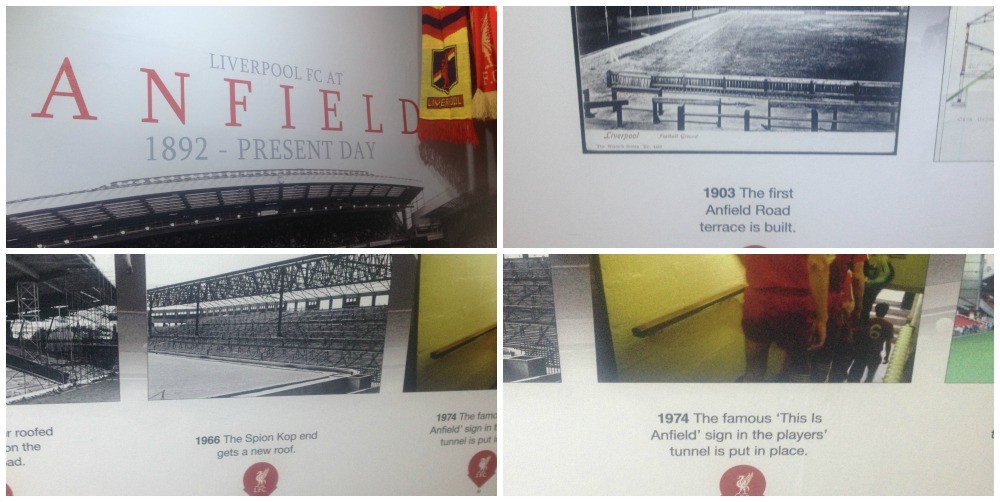 The history of Liverpool FC at Anfield 1892 to present day 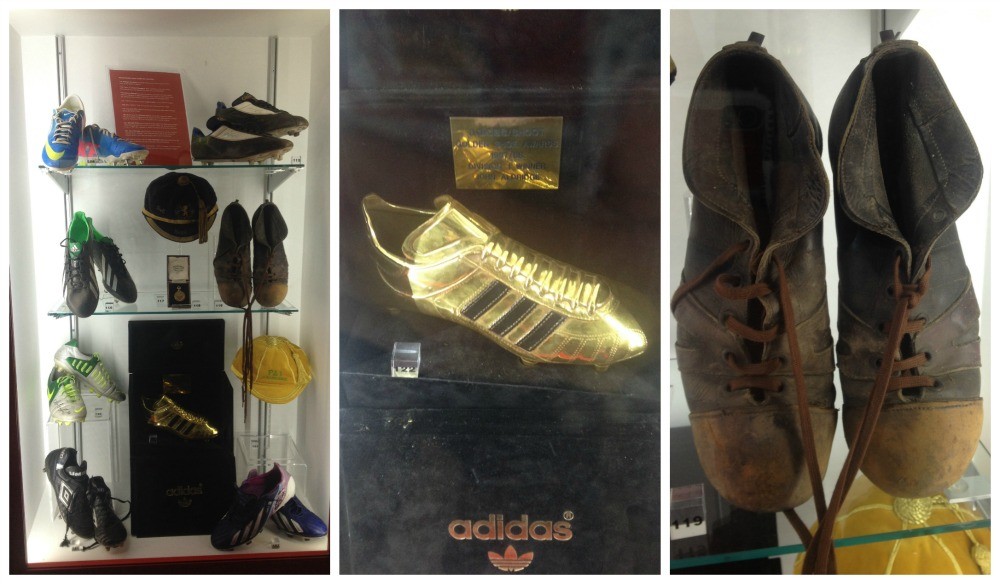 The football boot over the years

Inside the LFC Story at Anfield

Not only does the LFC story go through the history of LFC it also profiles some of the key players that have helped this club become famous over the years. Each position on the team has a few greats of the game highlighted and what made them so special for the club and many of them for England as well. 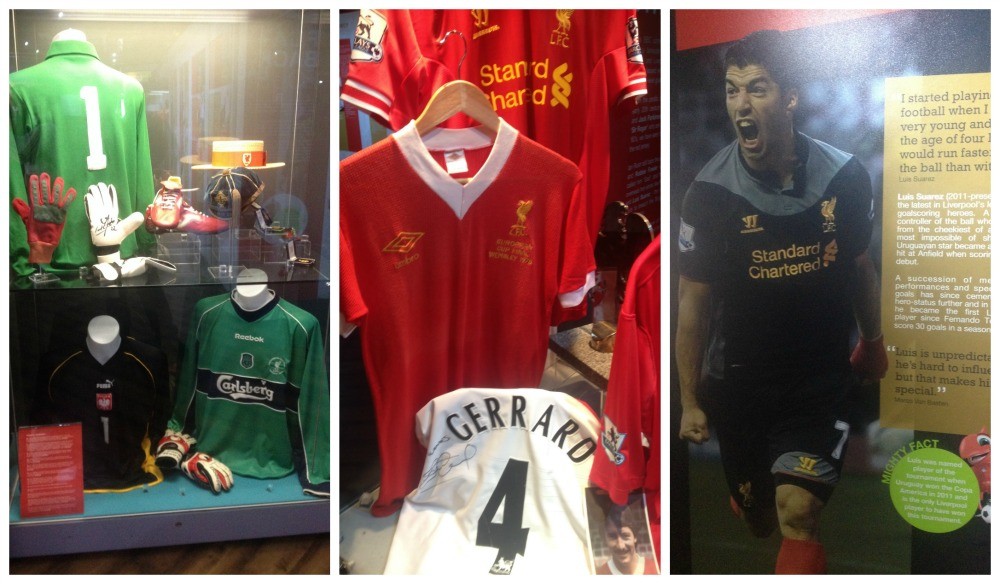 LFC Story on display at Anfield

Many trophies are on display with a story behind each one, the glory days of Bill Shankly and Bob Paisley are all documented on display up to the present day, well not quite… It ends with Brendan Rodgers as the manager, which untill a week ago was correct, now it’s all changed and Jurgen Klopp has replaced Rodgers at the helm. 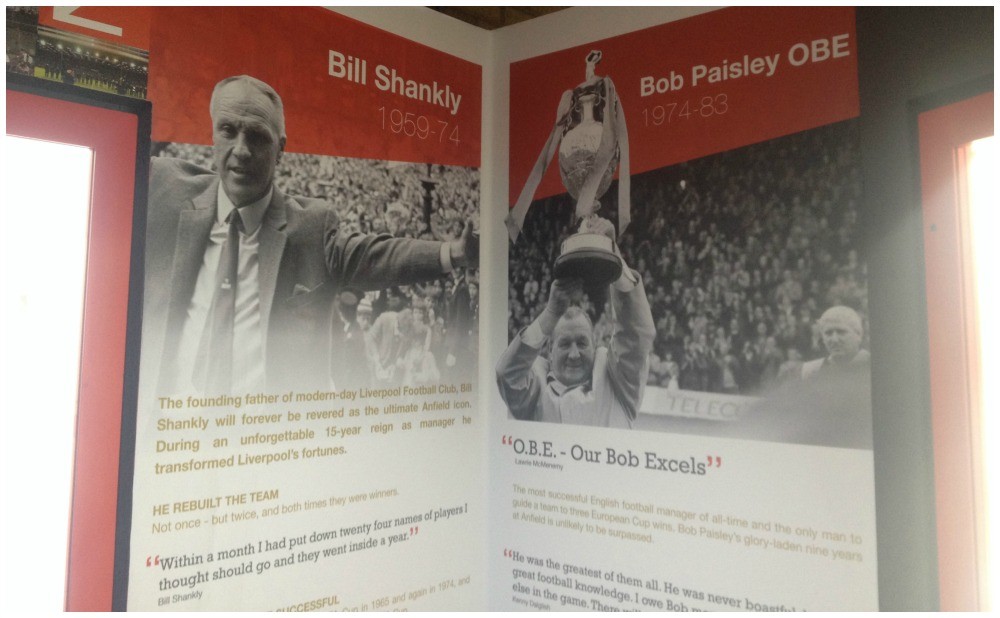 The golden years at LFC under Bill Shankly & Bob Paisley

Original turnstile from the Kop, notes from the Queen and a WWI Gas Rattle used at the games

The whole LFC story is great and the pride possession would have to be the five European cups that are on display, just a shame that they charge 10 pounds ($20 AUD) for a photo against a green screen with a replica cup.

All five European Cups at Anfield

Get your photo taken with a replica European Cup

And never to be forgotten the tragic events of Hillsborough & Heysel are remembered in the LFC story.

By now it was close to 12.45 and I joined the others waiting for the tour of the stadium to begin.

Leaving the Shankly statue we headed under the new stand construction past the players entrance and then entered through the match officials. 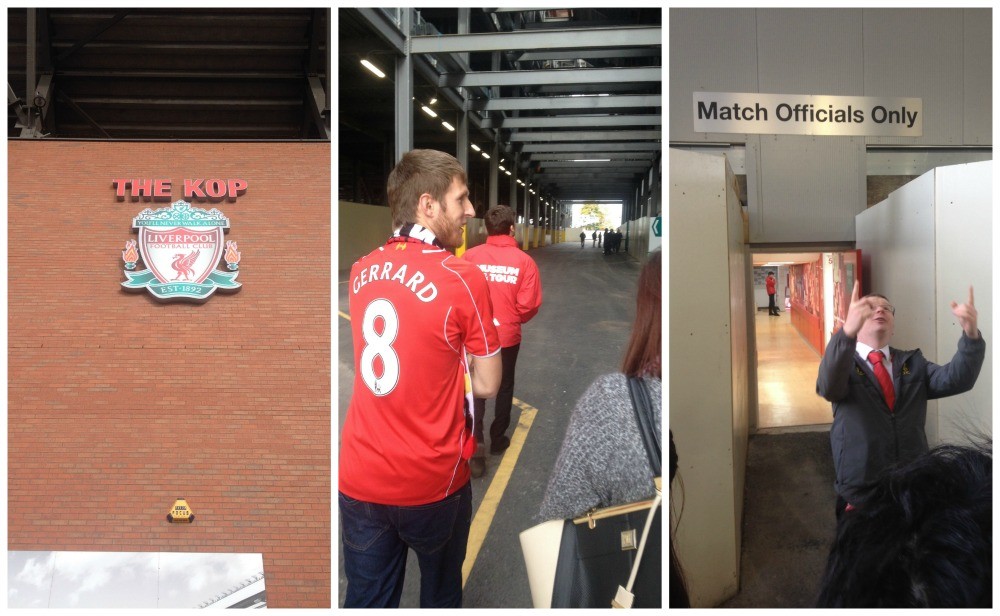 It’s a small corridor with some pictures along the walls on one side and some of the TV places where they hold the interviews you see on TV.

Inside the players area at Anfield 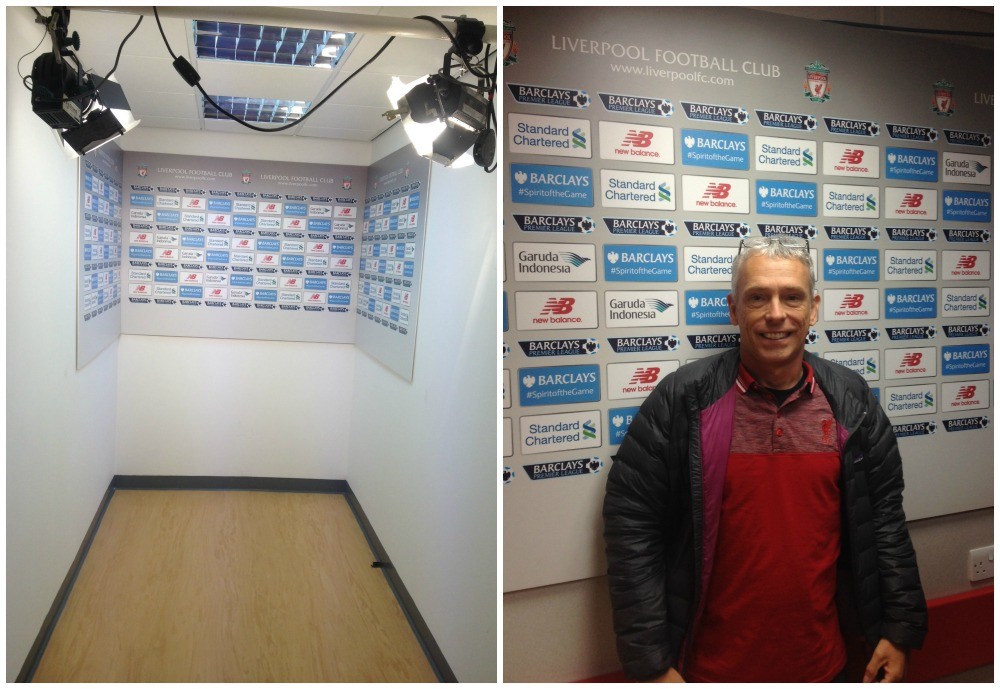 Just like on TV, an interview with me at LFC

This leads to the area between the Home & Away dressing rooms, it’s a very small space which looks a lot bigger on TV. Unfortunately we couldn’t get to see inside the changing rooms due the game later. Just off this area is a corridor that is where the dignitaries enter. 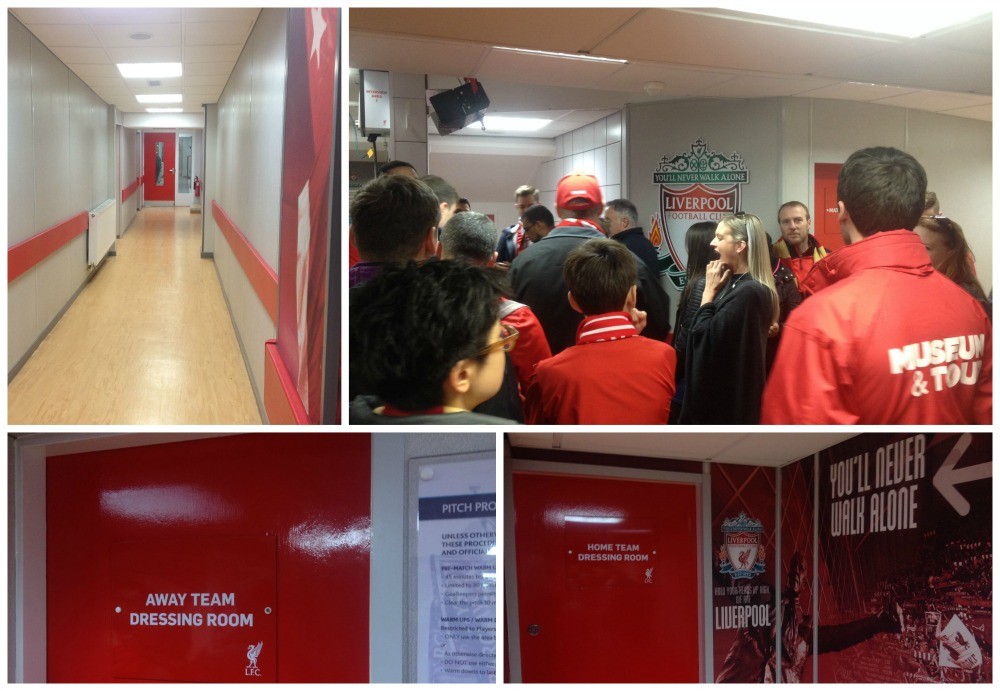 After spending some time here with the guide talking about the stadium etc we were taken down the steps under the infamous ‘THIS IS ANFIELD’ sign that hangs and many Liverpool player has touched game after game. 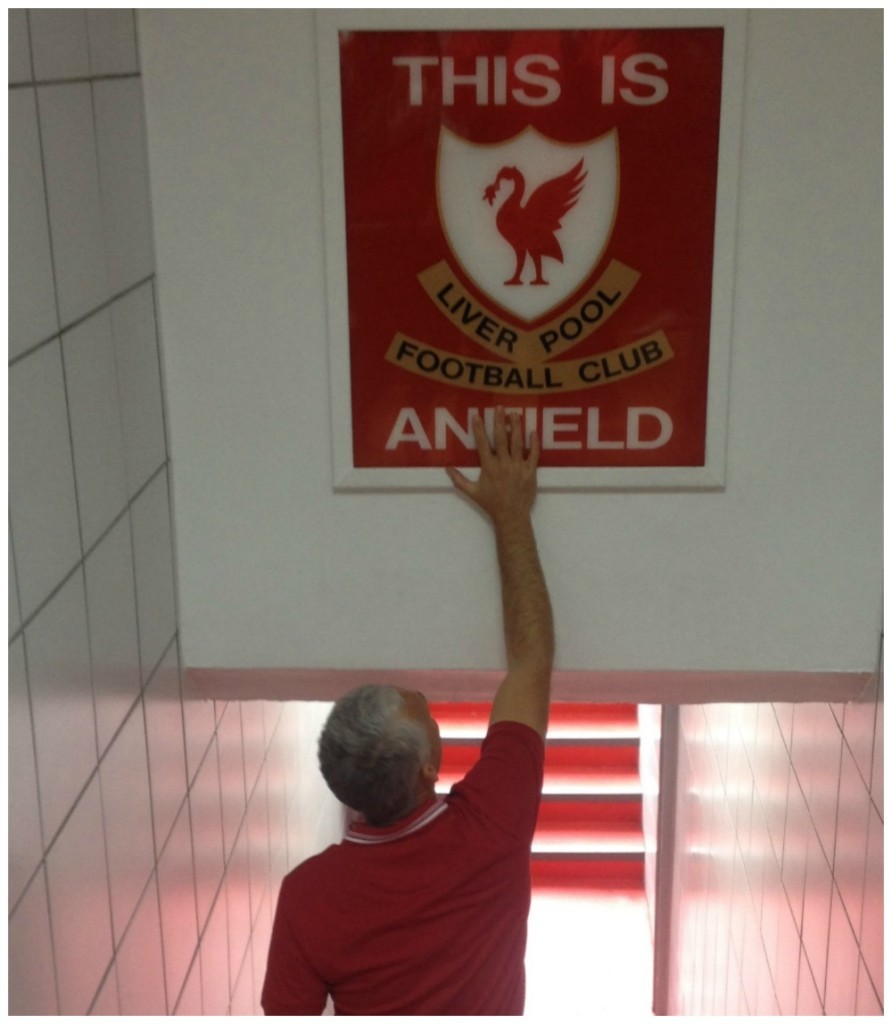 A dream come true, touching the THIS IS ANFIELD sign

The steps go down and up the tunnel out onto the pitch. Unfortunately even being on the tour you are not allowed onto the actual pitch which kinda sucks and so I got as close as possible before we were told to take a seat in the dug out where the two teams coaches and players along with the manager sit for each game. 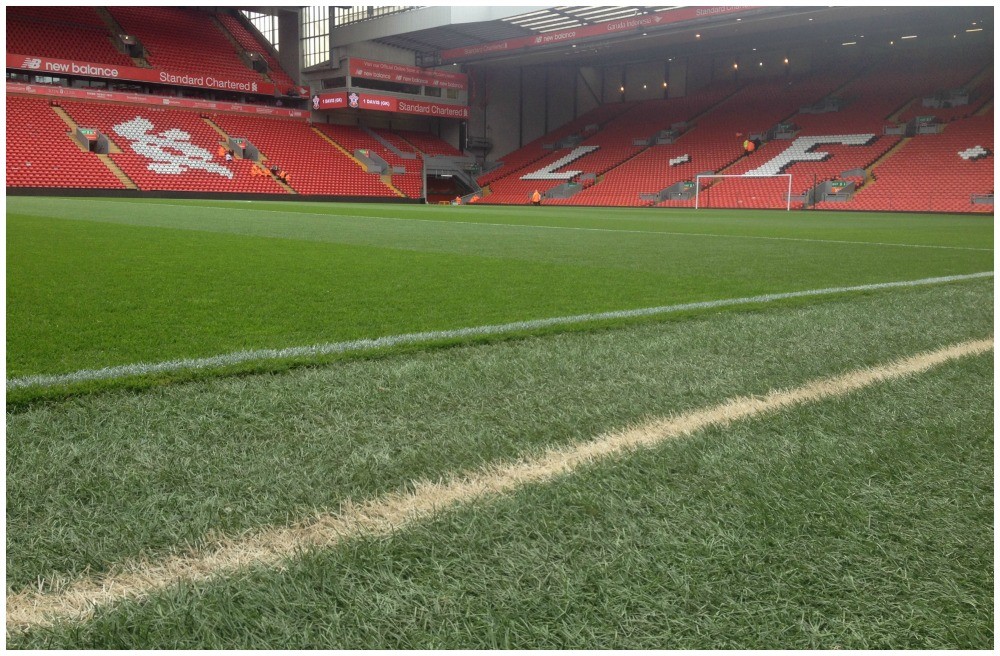 As close as I could get to the Anfield pitch

The Centenary Stand at Anfield 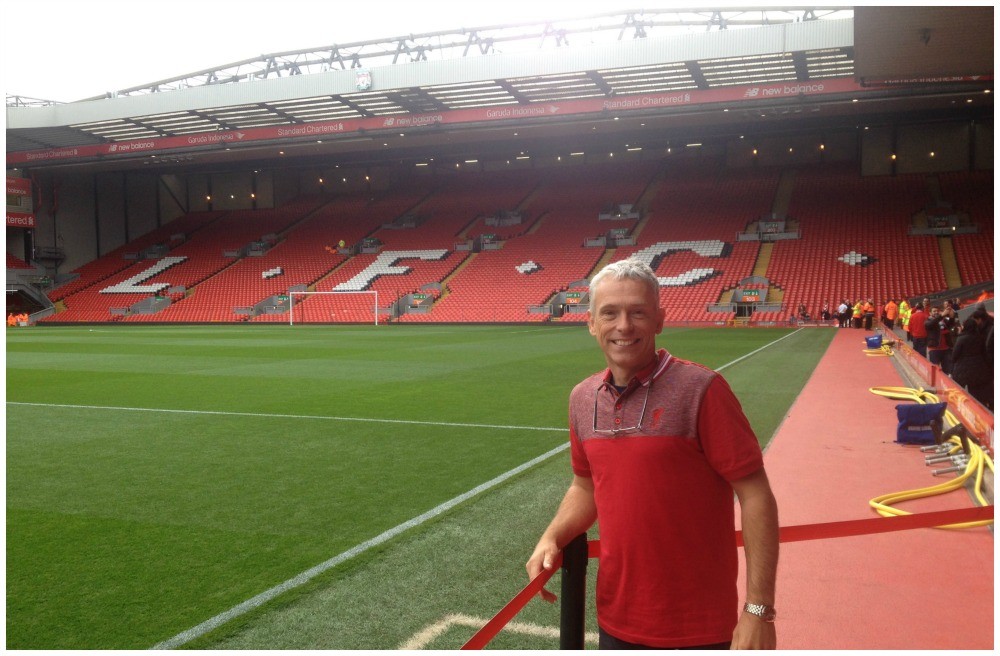 The players tunnel, the commentary gantry above the Main Stand and the dug outs at Anfield

From here we walked along the edge of the stand to the Kop end where we sat again for another short talk before which concluded the tour.

The Kop at Anfield

The tour lasted around 50 minutes and cost 20 Pounds ($40 AUD) which if you are not a Liverpool FC fan then you’d probably think very expensive, but for a once in a lifetime experience it was worth every penny.

With plenty of time before kick off I returned to the museum and finished looking around this time mostly in the Gerrard Collection. 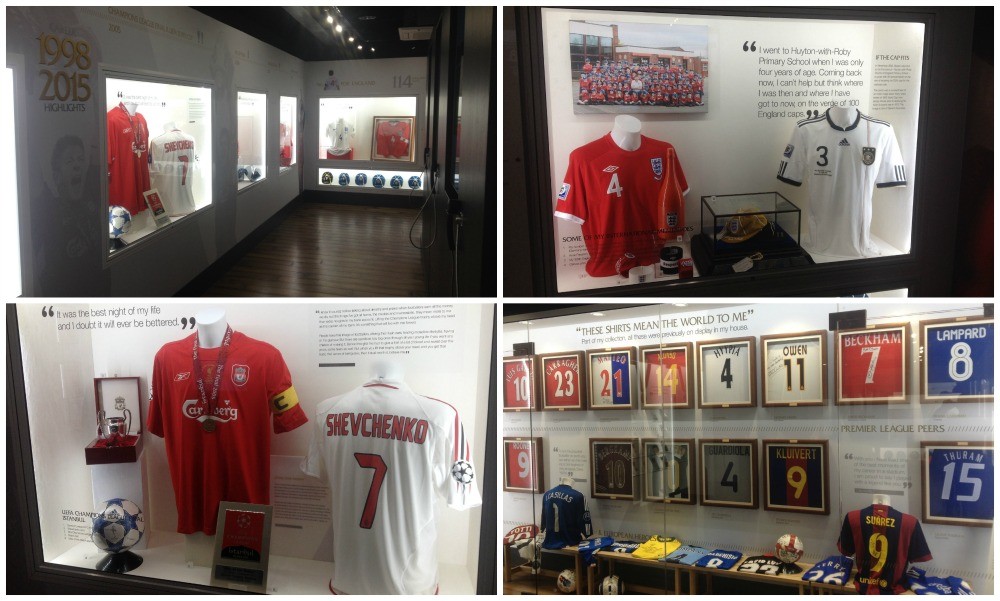 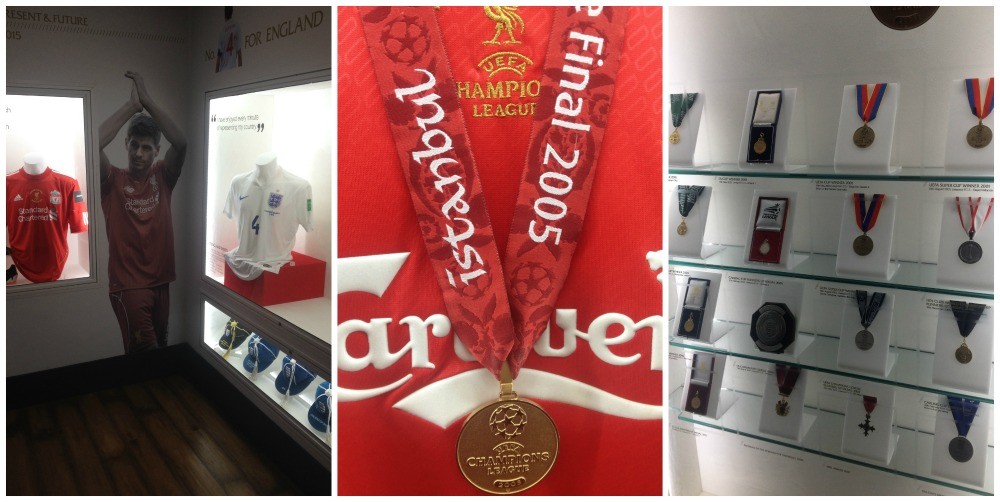 Hunger finally set in and I decided to head to the pub across the road for a beer before the game. The Park pub was absolutly chockers, you could hardly move, full of Liverpool fans drinking and singing songs from the Kop. These must have been the true Kopties that never miss a game. This photo of the pub was when I first arrived at Anfield around 11.30am as you can see there are not many people around. 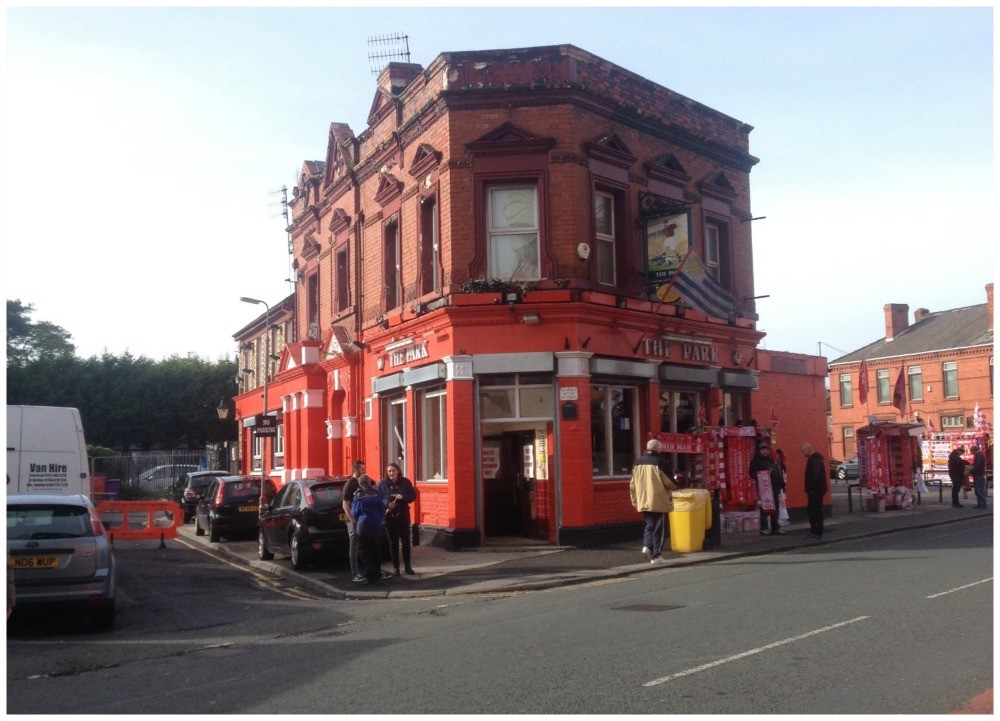 The Park Pub just outside the ground at Liverpool FC

Inside the Park Pub opposite Anfield

I managed to squeeze to the bar and got myself a pint which I drank rather swiftly which I thought the best thing to do and not wear it down my front as people pushed by to get to and from the bar. The best bit was the atmosphere which was exciting as well as a little daunting. I made my way out and found a van selling fast foods, burgers, chips etc and I indulged on a football afternoon feed.

Kick off is only minutes away… Take a look at what my 42 British pound ticket at Anfield got me at the home game against Southampton.

My First Time At Anfield – Europa League ...
My Experience Buying Tickets For a Liverpool Home ...

Tags: Anfield, Bill Shankly statue & Bob Paisley gates, Centenary Stand and Anfield Road Stand, Get your photo taken with a replica European Cup, Inside the LFC Story at Anfield, Inside the Park Pub opposite Anfield, Inside the players area at Anfield, LFC badge on the wall at Anfield, Liverpool FC, press interview places and the LFC badge, Steven Gerrards Champions League medal and others, The dug outs and a view from the Kop end at Anfield, The golden years at LFC under Bill Shankly & Bob Paisley, The history of Liverpool FC at Anfield 1892 to present day, The home & away team dressing rooms to the left and right of where we all are standing, The Kop at Anfield, The Park Pub just outside the ground at Liverpool FC, The stadium expansion to the Main Stand in progress, The Steven Gerrard Collection, Touching the Famous THIS IS ANFIELD sign in the tunnel