The 18th Bluegrass & Beer festival is on in Keystone over this weekend and we thought we’d take a look.

It’s great because we don’t need to drive home, not that we intend on drinking too much.

It’s another awesome day and the skies are blue as can be, it’s hot and the beers are flowing that’s for sure. Heres the thing, it costs $40 for a ticket that allows you to sample as many beers as you want, or can!! (There are lots). You receive a small souvenier glass from the festival which you carry around your neck, so you don’t lose it, and refill.

another busy festival in the River Run village at Keystone

You can also just buy beers from various stands that are for cash sales, yes the above sample method specifically for the sampling stands, they don’t take cash!!

For us the $40 each would be too much and we’d never drink that much, I mean I can buy a slab (24 bottles) and still have change from 40… But it’s not just the cost, I’d need a hospital after drinking so much, oh I forgot, it’s about sampling, duh.

We sample a beer from the New Belgium stand and listen to a band playing in the amphitheater. It gets busier and busier and the volume as well, but generally everyone is very civilised.

The smell of smoked bbq cooking worts through the village and we keep noticing people holding drumsticks, big ones… They look yummy and we follow our nose to the stand… It’s hard to miss as it is very busy and smoke is bellowing off the grill, for show of course but it works as they are by far the busiest food stand.

“drinking a beer in Starbucks”

With Turkey drumstick in hand we share and eat ‘caveman’ style down by the river, the ground is damp after the rain yesterday even though it’s really hot now.

After a while we decide to leave the cave and head back to civilisation and I grab a coffee from Starbucks, with Moni still drinking a beer in Starbucks, lol. 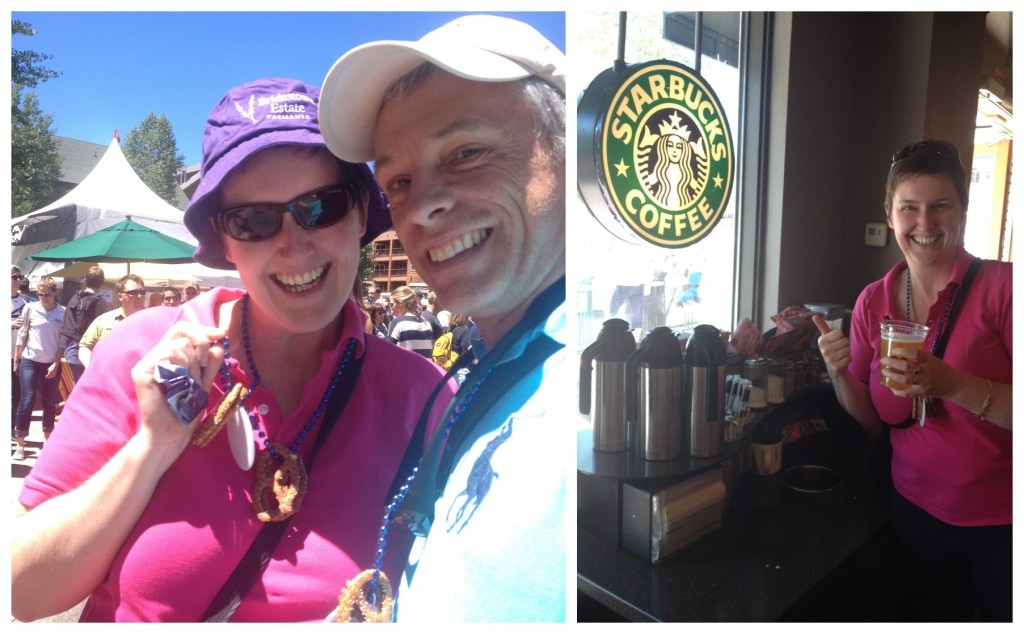 our pretzel necklaces & Moni enjoying a beer in Starbucks

While I enjoy my coffee in the cool Moni try’s on some sunglasses and eventually buys a new pair to replace her scratched ones. Which pair suit best?

That’s it for the day, home to sleep…