Visiting Grand Turk in the Turks and Caicos Islands.

“The beauty of Grand Turk”

After spending yesterday in town at San Juan in Puerto Rico it was only fitting that today be all about the beach.

Grand Turk from the Carnival Splendor

I had bad indigestion last night which kept me awake for some time, I ended up laying on the cold bathroom floor for a while which helped. Not sure if I had eaten too much or that something just didn’t sit right, anyway.

We were up and ready, to be downstairs in the boardroom in time for Moni’s coaching call by 8am this morning. The Skype connection in the cabin was too weak and cut out which meant we had to relocate to the boardroom. It works quite well in there as it is near to the Web room which is the computer hub.

After the call we had breakfast in the Golden Pearl dining room and spent some time chatting to a few couples at our table. 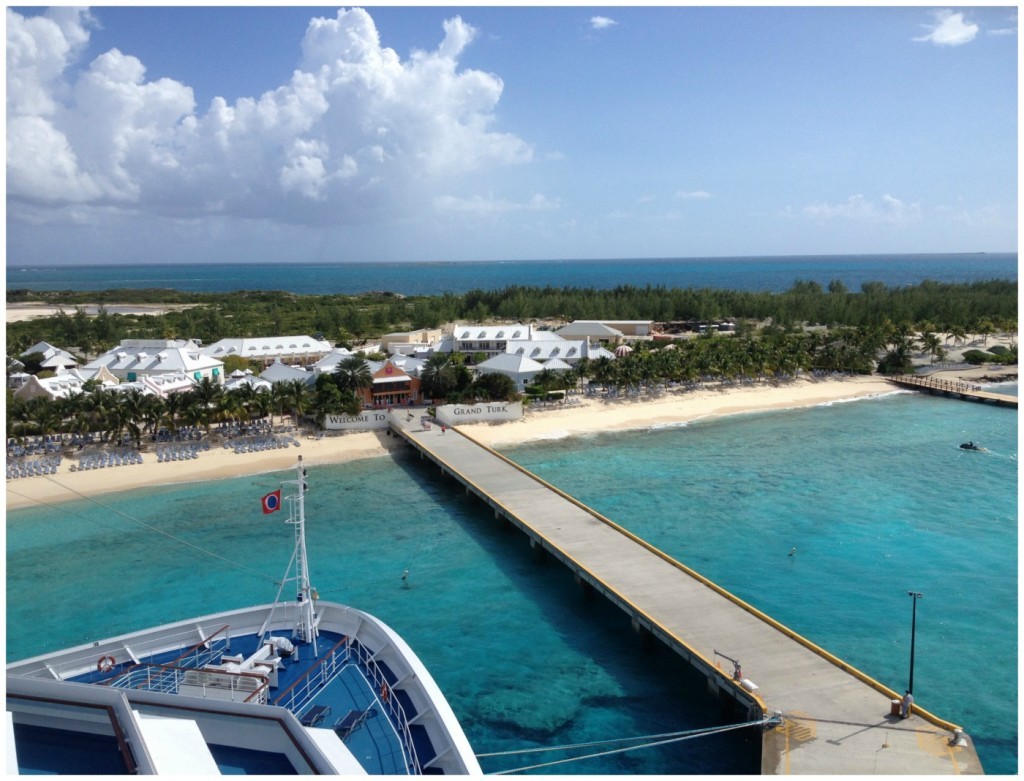 Grand Turk from the front of the ship

Then, with Grand Turk in sight we packed a day bag with beach gear and did the three S’s slip-slop-slap before heading out in to the sun. 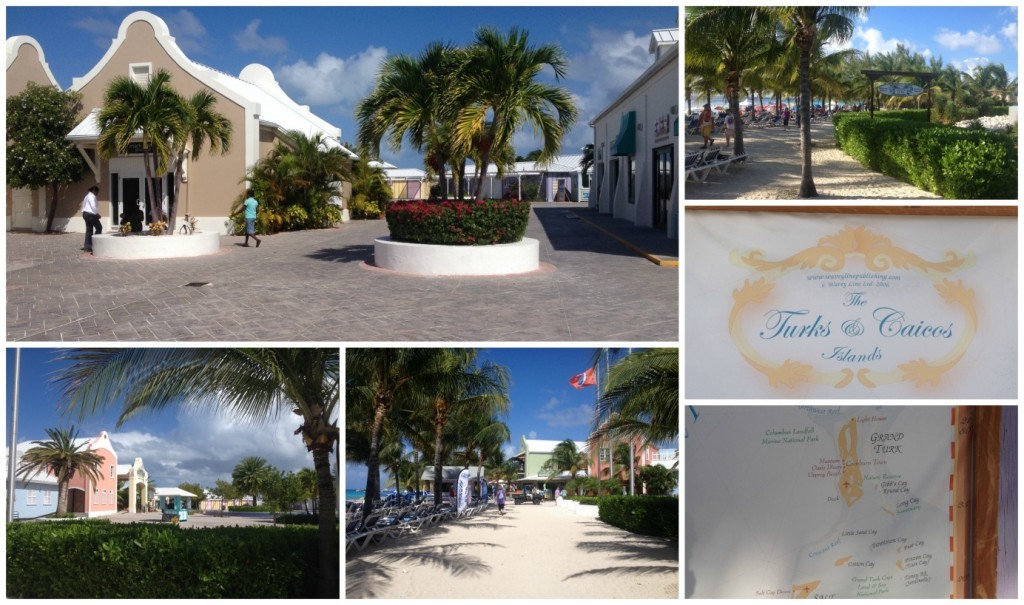 The water was so clear and turquoise blue in colour and the beach was lined with deck chairs ready for the ships guests. The Splendor was first to dock followed very quickly by Carnival Liberty, they were the only two ships here for today. 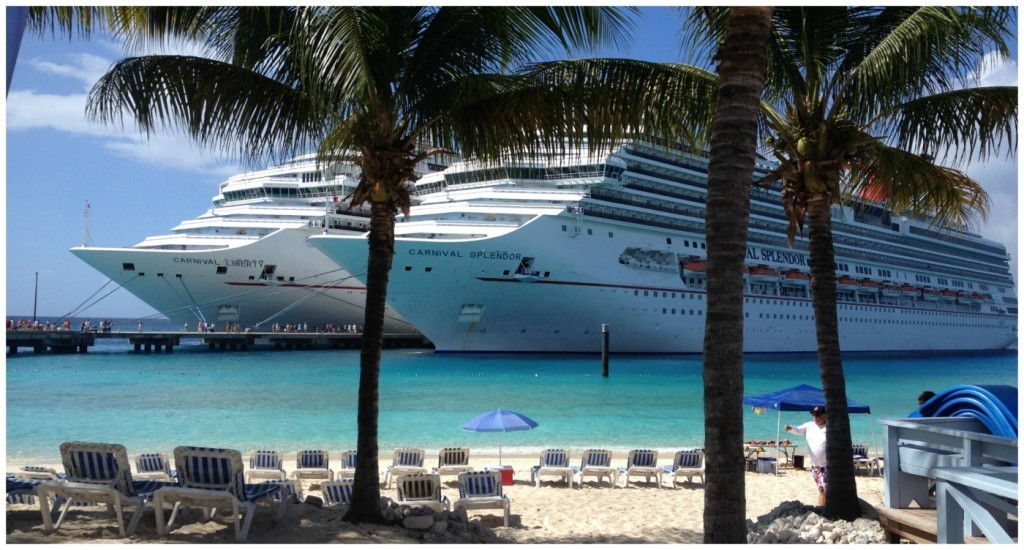 Saying that, still around 5000 passengers were on Grand Turk for the day. We managed to bypass the long line of people waiting to get off, somehow going an extra level down and walking straight off, perfect timing, this allowed us to find a couple of deck chairs in the shade of a few palm trees.

We spent the day in and out of the warm clear waters right alongside of the ship. It was very hot in the sun and we kept up the sun cream to protect and also stayed in the shade as best we could. Thankfully a few clouds made their way over which was a welcome relief.

The locals were selling cold local beers from tents on the beach and some were walking up and down offering them for $4 each, we enjoyed a coldie or two but that was enough, at 6%. 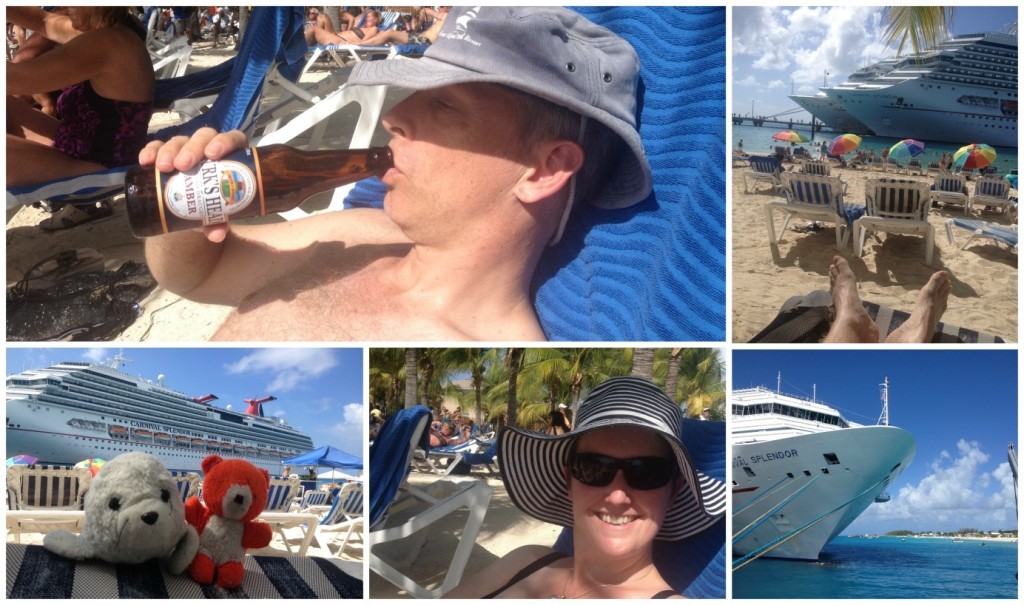 There was music playing from the Margaritavile resort bar behind the beach which was entertaining. 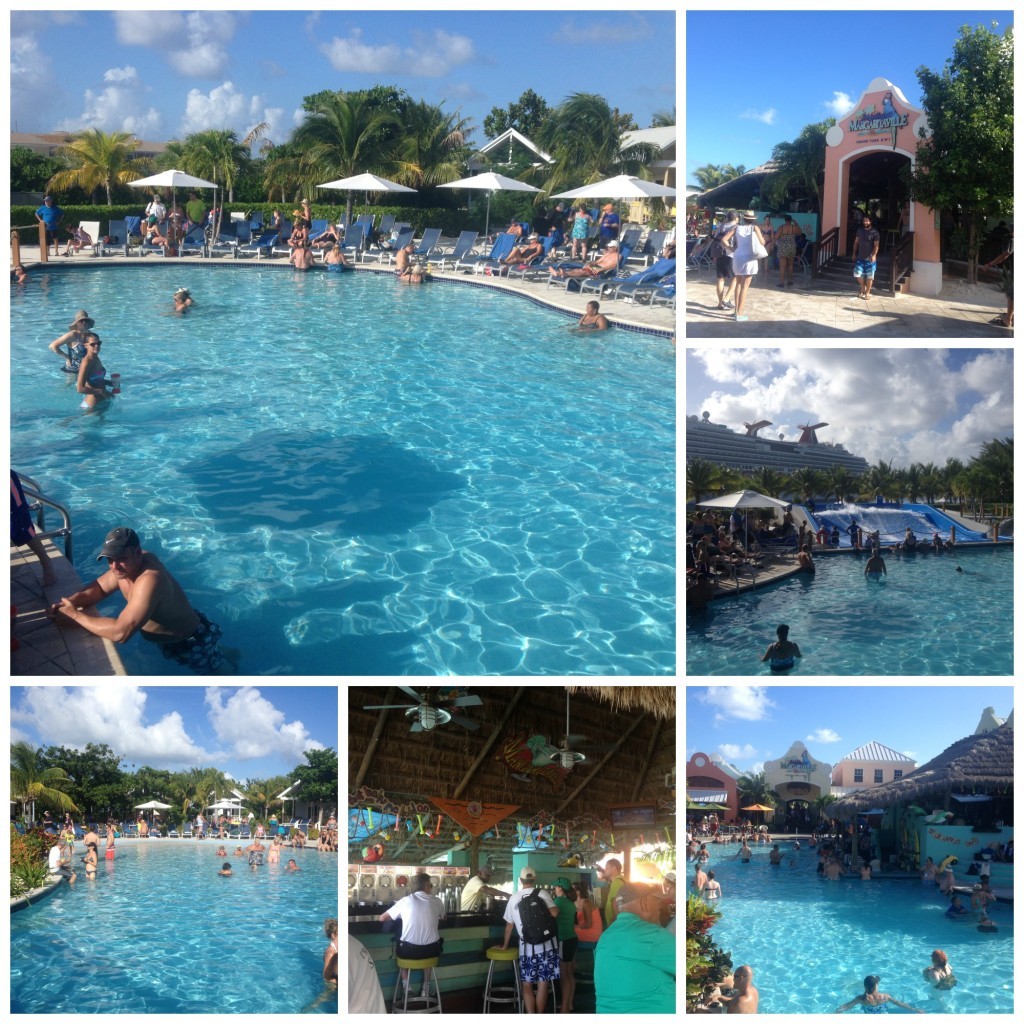 After about four hours laying on the beach we packed up and had a stroll around the tourist shops and the information displays about the famous Splashdown of the history making orbit that returned to earth here at Grand Turk. 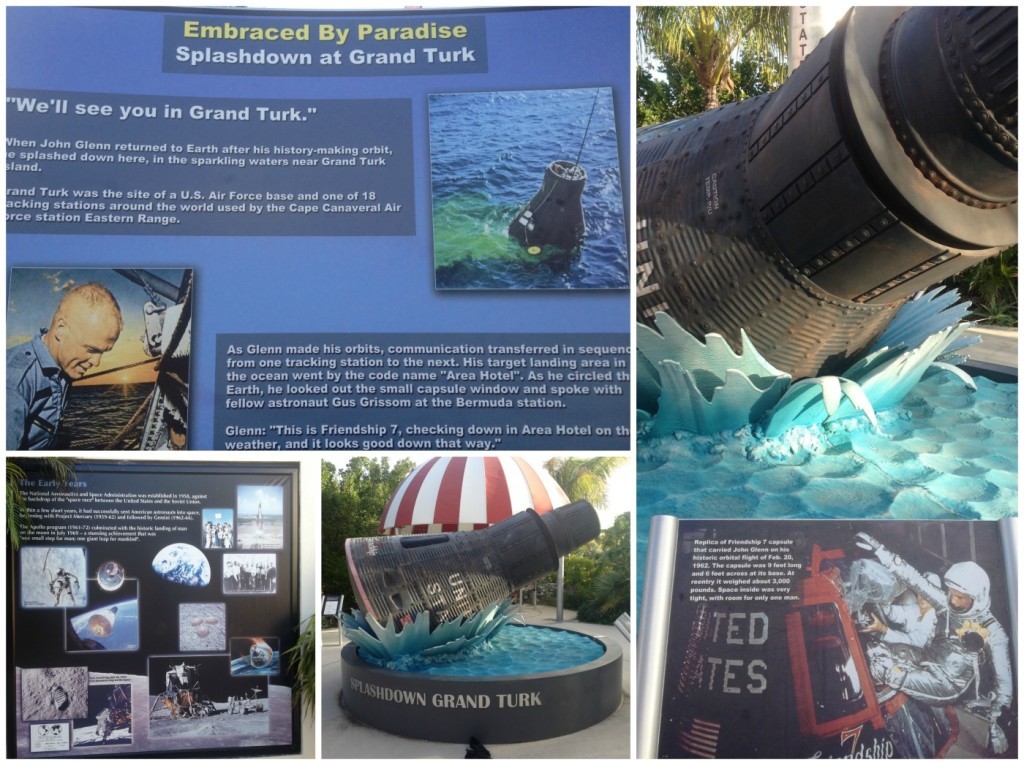 There is also a model humpback whale right at the beach which, from a distance looks like it is breaching at the shoreline especially in the shadow of the setting sun. 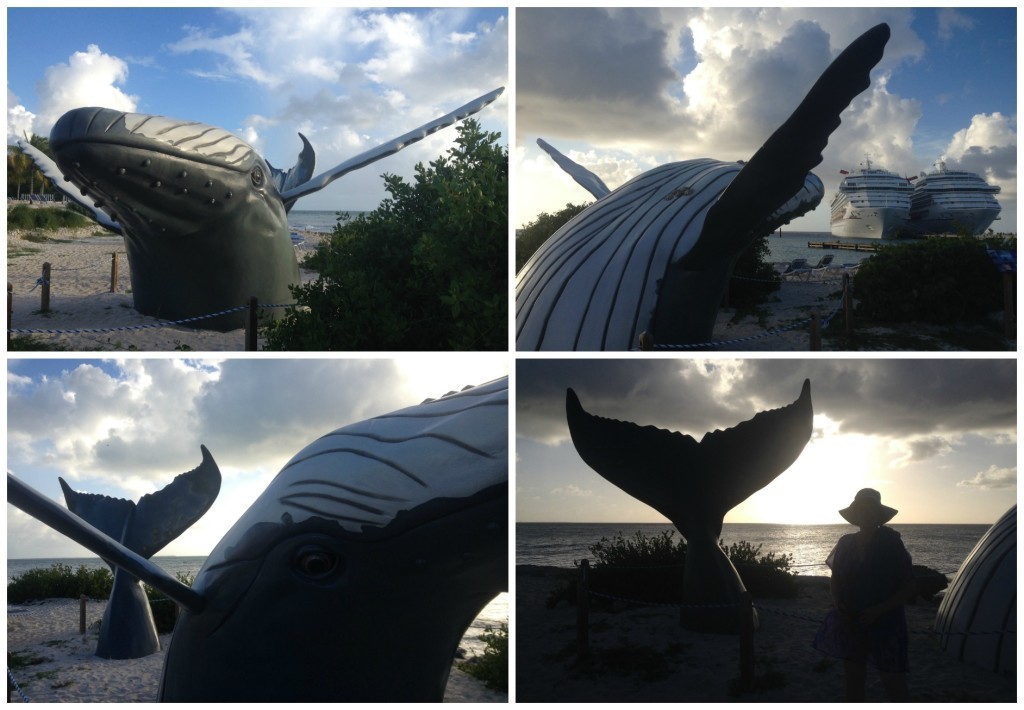 Leaving us just time for a Pina Colada $8.00 at a quieter beach hut before heading back to the ship ready for a 5.30pm departure. 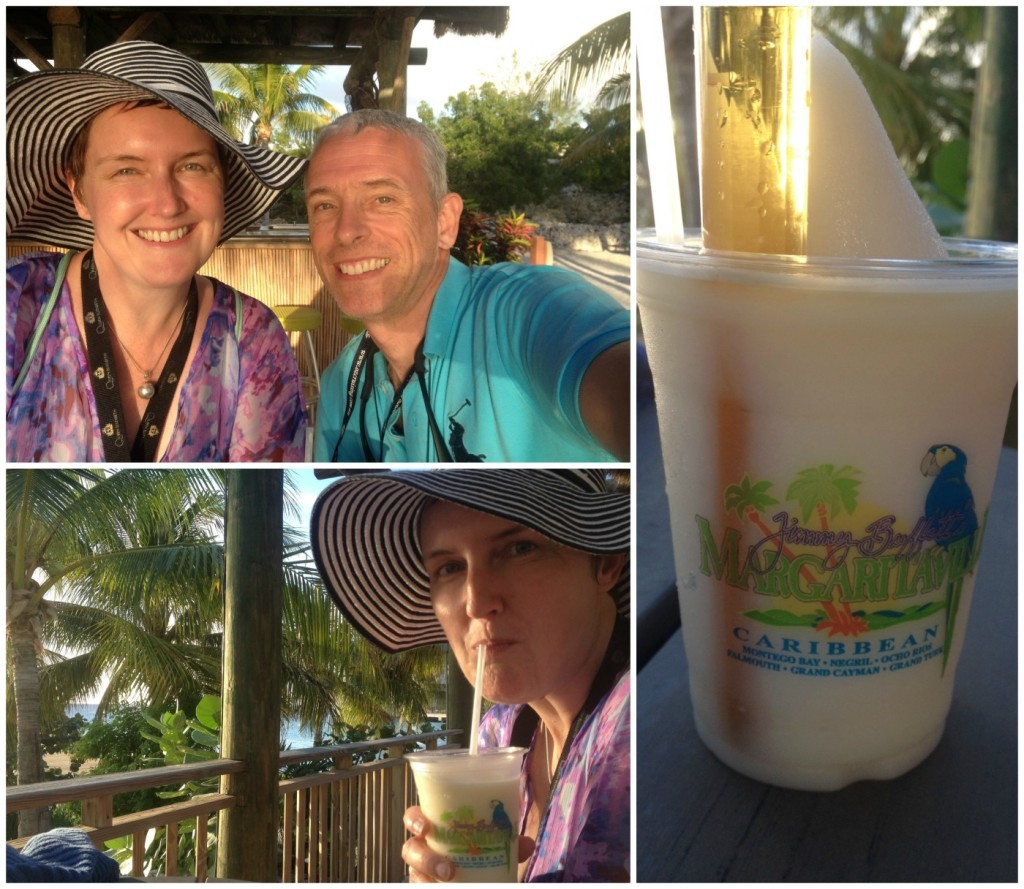 Pina Coladas as the sun sets on Grand Turk

A nice shower to wash off all the salt and sand before feeding our hunger with a pizza as we had no lunch wanting to spend all day at the beach. We could have come back on board but we didn’t wan’t to lose that time. or we could have gone to the bar and joined the hoards of people eating burgers or nachos but that was not tempting enough. 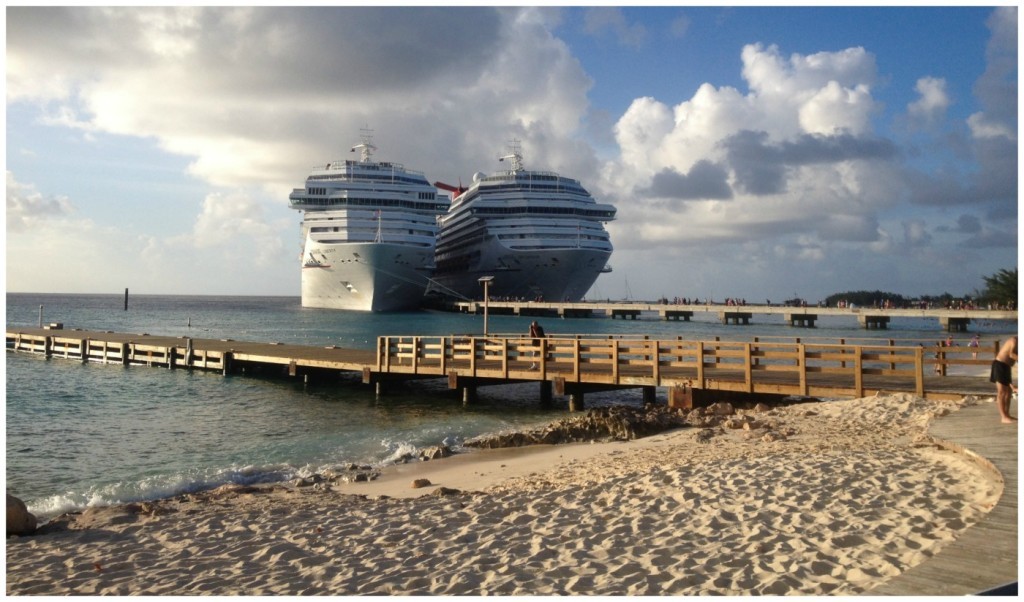 One last selfie with the famous Grand Turk sign. 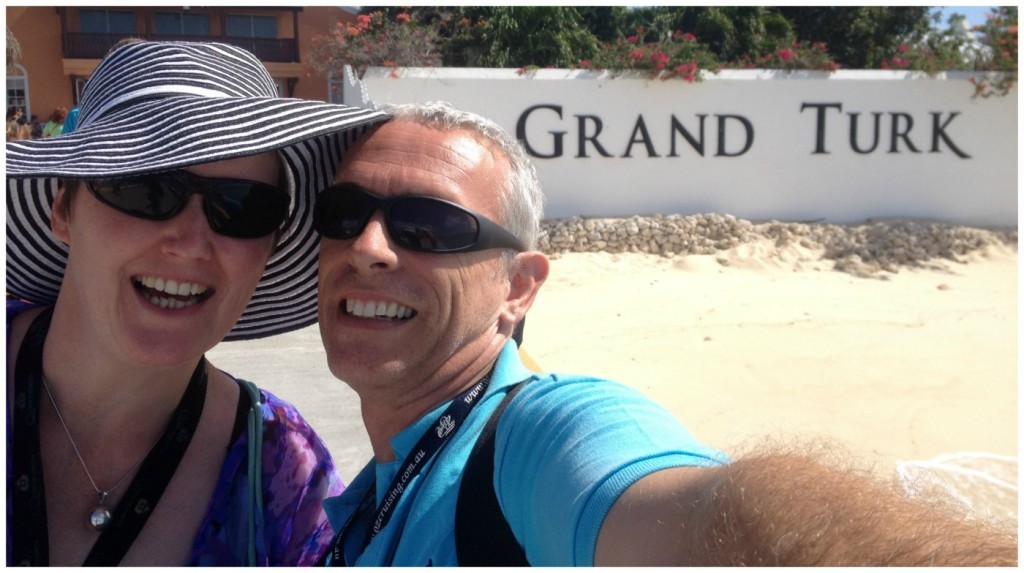 Right now Moni is on another coaching call as we sail away from Grand Turk.

Tonight is the second Elegant evening and we will get dressed up later for dinner. 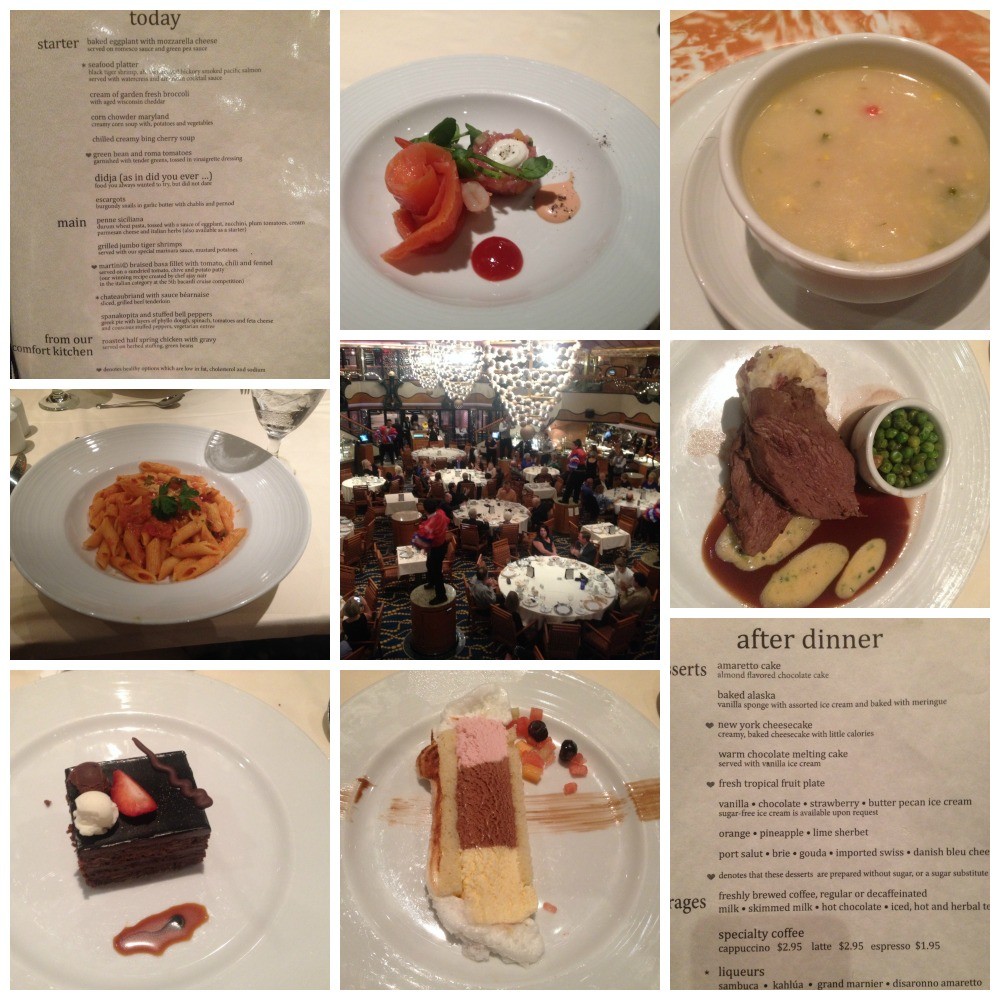 Dinner in the Golden Pearl

I’m back, and dinner was not bad tonight, but the dancing on the table tops was better.