Today Moni & I were among around 808 people that hopefully set a new world record of doing yoga postures one after each other. At 8.30am this morning we and nearly a thousand people gathered at Pioneer Courthouse Square in Portland Oregon to try and eclipse the record that stands which is 696 people that India currently holds.

At 8.30am we joined the already massive line of people that had registered for ‘The Great Namaste’ record attempt which was organised by Chris Guillabeau and the World Domination Summit 2014. As I said the line was huge and we slowly made our way to the entrance to the square where just over 800 yoga mats were laid out covering the floor space in lines.

The Great Namaste line up

As we made our way closer to the entrance we could see that the place was pretty full with only a few spaces left, there was never enough for all the people still in line, it would be touch and go to see if we would get a mat… Only those that had a mat would count towards the record.

The Pioneer Courthouse Square filling up

The closer we got to the front, the slower the WDS ambassadors were letting people in. Then they wanted just a few single people as the odd space was found, so we quickly split and I pushed Moni forward to the first single space, off she went, that left me and many others still waiting.

About 7 minutes passed and nothing was happening, then at the last minute an ambassador came forward and said there was one more, that was mine… number 808 according to the counter. I took my spot in the blazing sun. How lucky were we to get these last places. (Officially I got the last spot).

It was a real party atmosphere with music playing and people all around happy. A few introductions over the PA system and then the yoga leaders began with a few instructions before we did a quick run through to make sure we knew who to follow, and then it began.

We all followed each other in a domino effect, each of us doing the pose and holding it until the next pose, this took about 15 minutes to pass through the entire 800+ people. Each pose had to be held until the next and we did five yoga poses which lucky for us all were easy poses. The skies were clear blue and the temperature was at 80 Fahrenheit 28 Celsius it was hot. 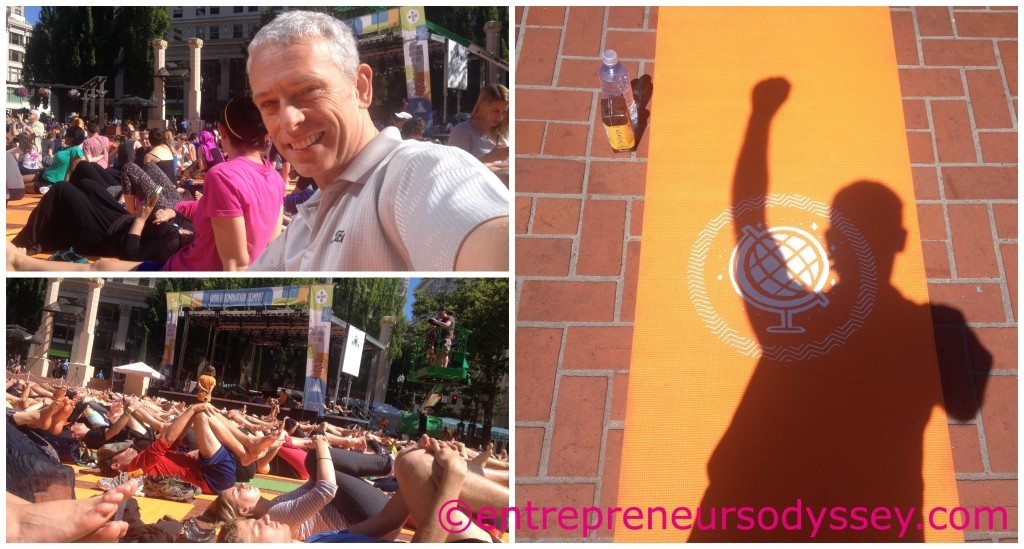 The Great Namaste, before, during & after

Just over an hour and as the last people finished the fifth pose a massive cheer was made as the attempt was completed first time without faults, thank goodness for that as another hour in that heat and people would have been seriously suffering. We will now wait to have confirmation on the world record.

It was an awesome morning and an achievement for sure to be part of hopefully a New Guinness World Record, Note, this is not yet official