If you have read my story on how to buy a Liverpool FC EPL matchday ticket then you know how I spent two hours online waiting to get the very last ticket to see Liverpool v Southampton.

The weeks went past and I planed my day in Anfield Liverpool to the max, I booked a Museum and Stadium tour for the same day as the match which I booked online through the LFC website.

Well as it turns out LFC had qualified for the Europa League last season and the draw took place and Liverpool were placed in a group with Bordeaux (FR), Sion (CH), and Rubin Kazan (RU).

A few weeks later the dates were set for those games and whilst walking on the Camino de Santiago Liverpool played their first game against Bordeaux in France, it was kind of strange considering that we had stayed in the Bordeaux region for the past three months.

Anyway, with the draw taken place I took a look at what dates and games were to be played. During the week when we were booked to stay in the city of Liverpool the mighty reds were to play Rubin Kazan on the Thursday night before the EPL game which I had tickets for.

For me it was a no brainer to check the online sale date for tickets and mark the diary. Sure I had already secured a matchday ticket to my first EPL game, but now I had the chance to hopefully get another for a European cup game. If you follow football you’d understand that they, Europe and League games and atmosphere are totally different.

The morning came and knowing what to expect I was online and ready. The session opened and once again I found myself waiting in the queue, only this time a much quicker experience, maybe not so many people online who knows.

My turn came around and the allocated 30 minute slot started, it was time for me to take a look at what was available. Actually to my surprise there were a few seats still up for grabs, which meant I could get two one for Moni & I. There were no seats in the famous Kop stand but a pair just to the side.

Europa League tickets versus Rubin Kazan secured. In the blink of an eye my first Anfield experience went from a severely restricted view against Southampton to a great seat at a Europa League game, but even better still Moni was going with me.

Sharing an experience what ever it be with someone makes it all that more special. And so the boy who had waited over 40 years to go to Anfield was now going twice in four days.

Matchday at Anfield versus Rubin Kazan

During the few days before the game we had found out the best way to get to Liverpool FC ground ‘Anfield’ and at 5.30pm we made our way, first by train then the soccer bus which connects to the stadium, well not that close, you still need to walk for a while.

Arriving at the bus stop there were a few other supporters there and when full the bus left. As we got closer more and more fans could be seen walking towards the stadium. We joined the walk among the scouse supporters.

Anfield is having an stadium expansion being built which was the first thing we could see, it will take the capacity to 54,000. 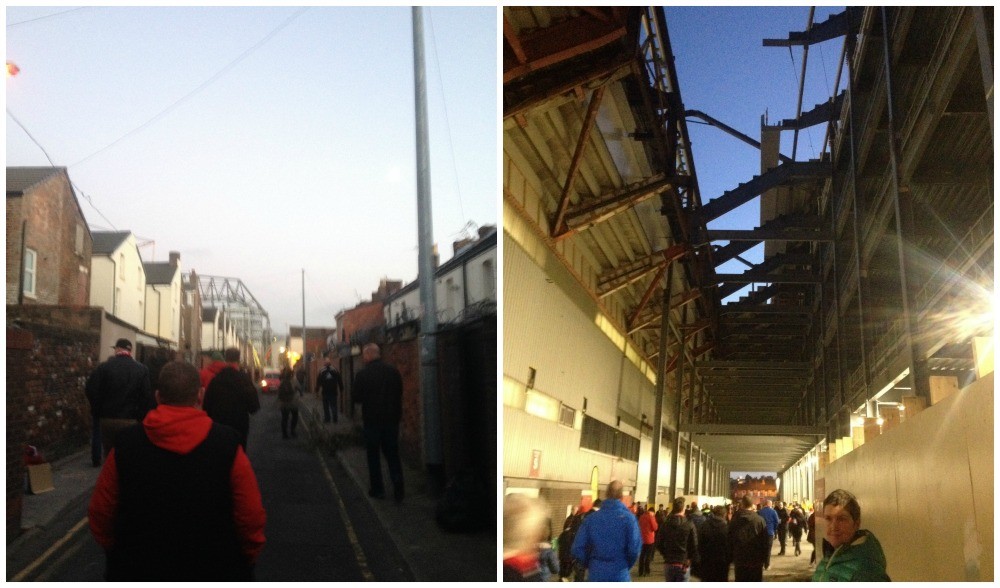 The new main stand construction from the streets and then underneath

Walking on past rows of terraced houses and a couple of pubs on the street corners we are outside the stadium, the roads have been closed to allow foot traffic only and a steady flow of fans are gathering around the stadium. 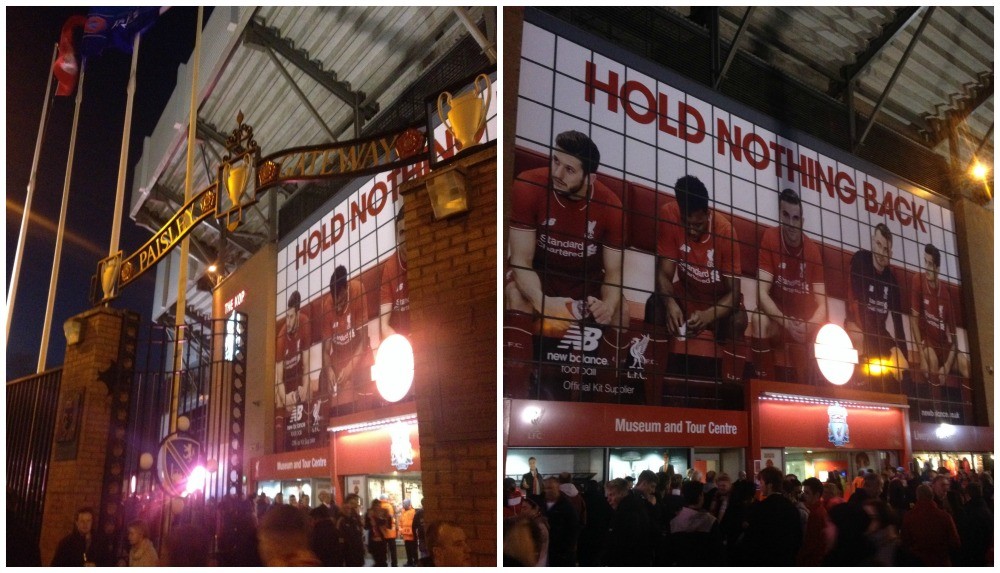 The Paisley Gates at Anfield and the shop

The gates are not open yet as we take a walk around the outside, people buying scarves, flags, badges, programs etc. The LFC shop is doing a roaring trade and is so packed you could hardly turn, even though they were limiting the flow of people in the shop.

LFC Scarfs and hats for sale outside the stadium

With program in hand and my LFC beanie on we scanned our membership cards at the turnstiles and in we walked. 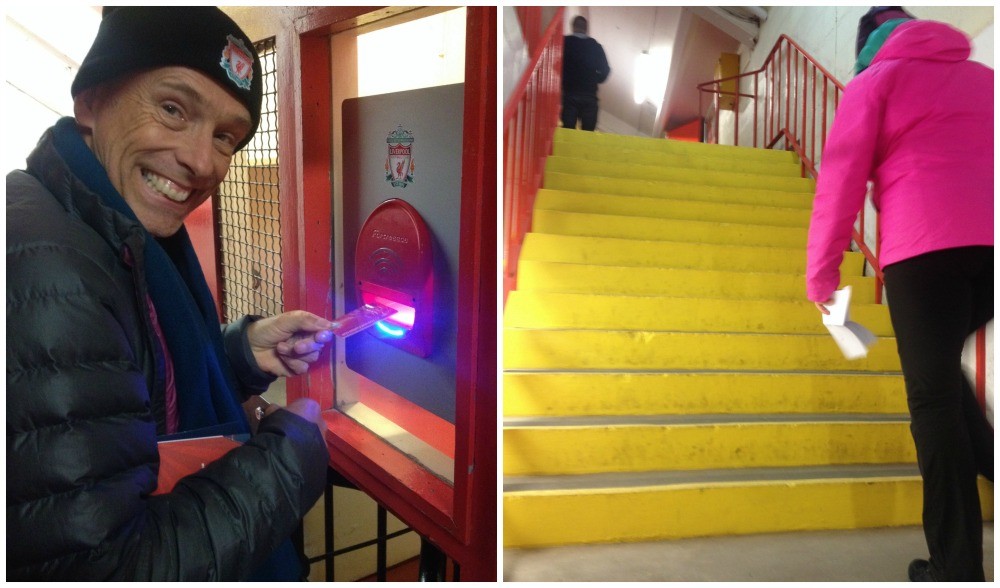 Through the turnstiles and up the steps

Up a flight of stairs and out onto the terrace of the Main Stand… what a sight… the lights bright as the sun, the pitch as green as the wettest green paint, the stadium empty. 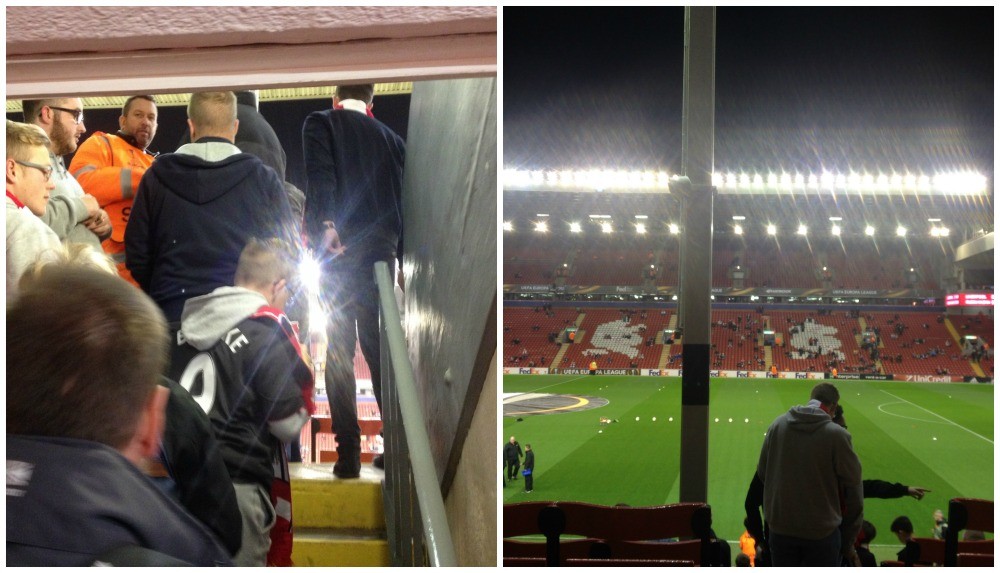 Of course what did I expect, everyone already to be in and waiting. Groundsmen were tending to the pitch and TV staff were doing the pre game build up down at the pitch edge. We found our seats and slowly took it all in. 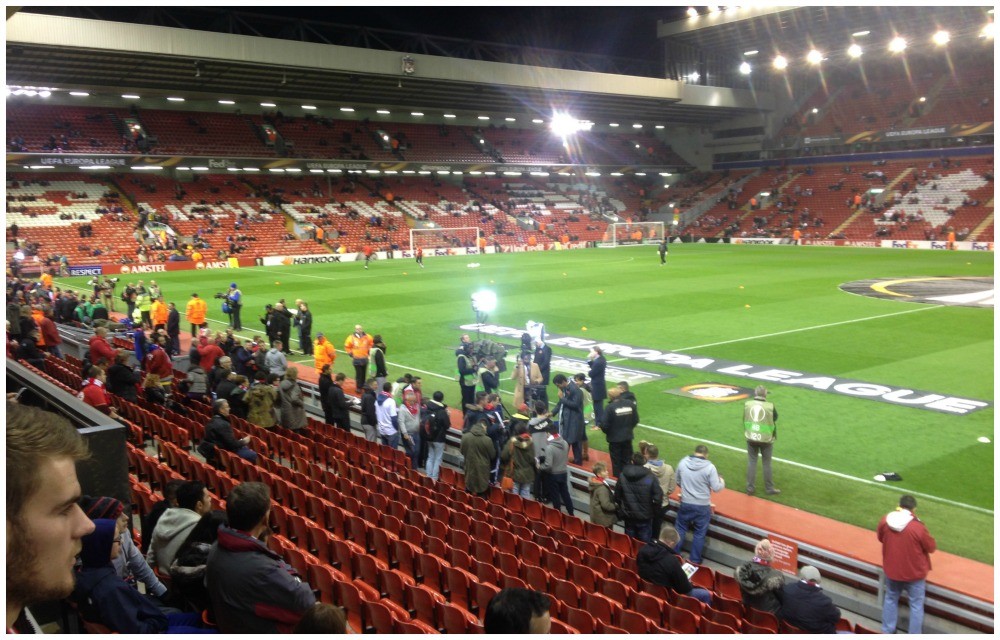 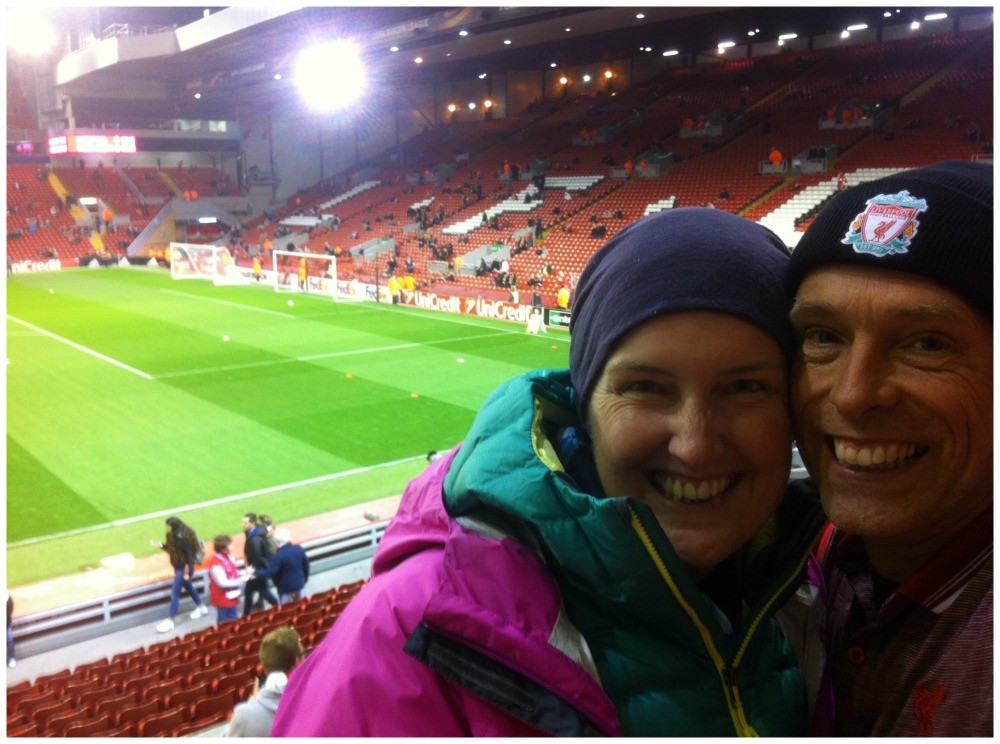 Once inside the stadium it felt a bit small, tight, compact, probably because it had been years since I’d been to a stadium and then it was the old Wembley which is huge.

Anfield Stadium the home to LFC

I took a little look around from different vantage points while it was slowly filling up. Moni went and got a cuppa. No alcohol was being served inside the stadium which was a surprise.

The famous Spion Kop at Anfield 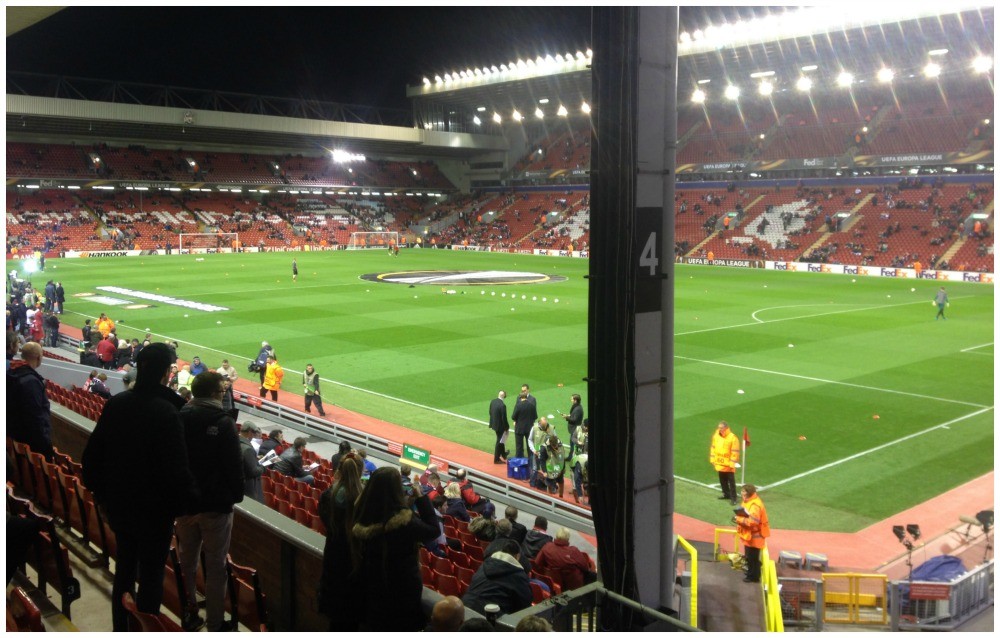 The view from the Main stand corner nearest to the Kop

The players appeared for the pre game warm-up and a generous cheer came welcoming Jurgen Klopp to the field for the first time, not only was I here for my first home game at Anfield so was the new manager. A special occasion for us both.

Old & young fans, the Press box and as close as I got to the pitch

The stadium was taking its time fill up and music was playing over the speaker system. Players from both teams warming up for about 40 minutes before the home team made their way off to applause, about 15 minutes to kick off. 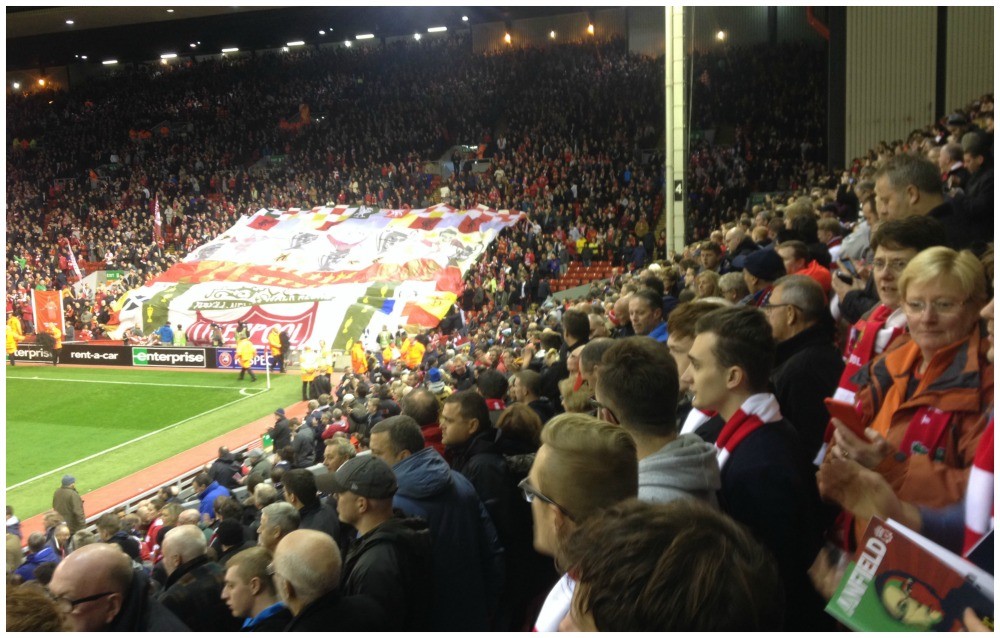 A huge flag being unwrapped at the Kop end

I knew what would be coming soon and that would be the Liverpool Anthem, a song that goes way back to the early days when Liverpool were just beginning to rise to glory days. The song “You’ll never walk alone” probably the most famous among club songs would soon ring out.

The Kop at Anfield

And sure enough the first cords came over the loud-speaker, my hairs stood on end and the crowd stood and sung in full voice, it was like nothing you’ve seen on TV, it was alive in me, words sung from my own voice filled the stadium with 40,000 other passionate reds fans. 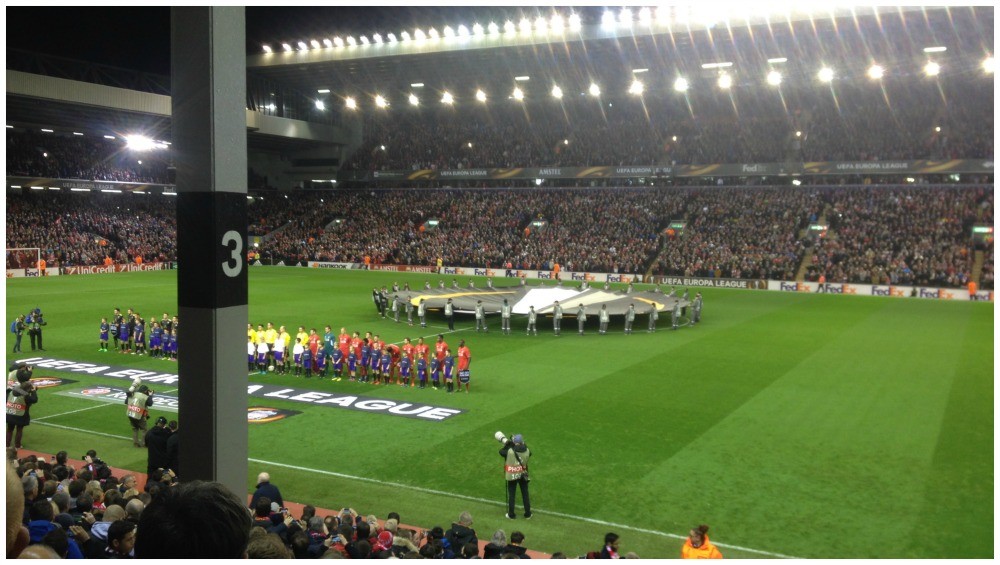 The two teams line up for the Europa League game

With the sound of the refs whistle the game began, a moment in history for Jurgen and Moni & I. The next of Liverpool’s Spion Kopites repertoire echoed in the stadium. 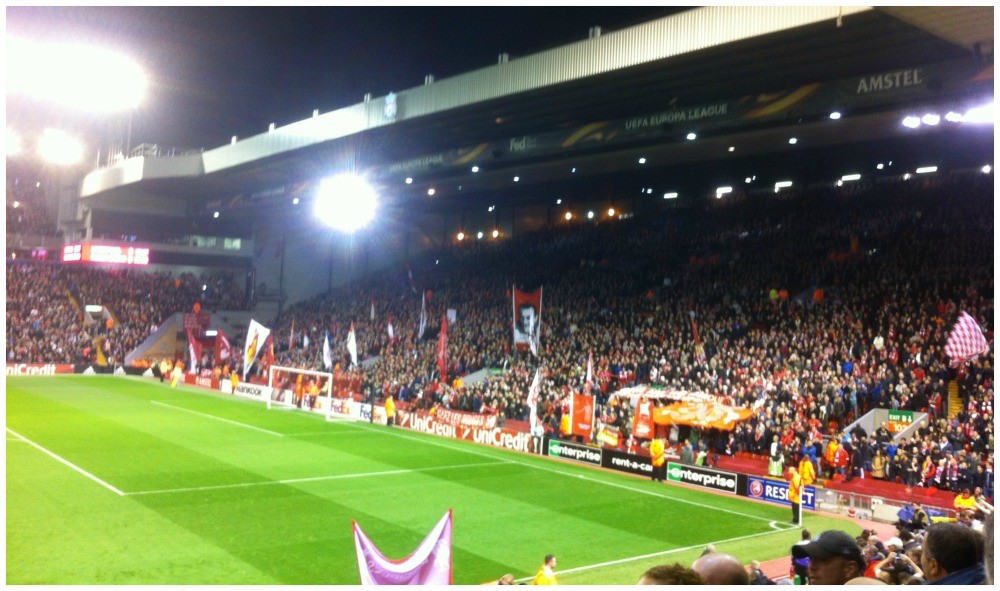 The Spion Kop on a European night

Action from game at Anfield

It was a pretty good game with Liverpool having many chances but not converting enough and so it ended in a 1-1 draw. For me and I think Moni it was awesome, sure it would have been great to have had a few more goals and a win but regardless of the result I was always going to have a great time.