Have you ever wanted to get tickets to an EPL game? Well this is how to buy EPL tickets for Liverpool home games.

Ever since I can remember watching football, playing football I always supported Liverpool football club.

Back in the glory years when the mighty reds were the feared team throughout Europe I followed as the club won many titles and trophies. Many of the England team back then played for LFC and growing up with iconic players like Kevin Keegan, Ray Clemence, Emlyn Hughes were all footballing heroes of mine.

These days the force of the mighty reds may have diminished somewhat but my support continues and considering that I was born many miles away with many teams in-between it’s a wonder that I still am a fan. Needless to say I have never been to Liverpool or the famous ground that is Anfield.

Being on this Odyssey of ours is allowing Moni & I to travel and spend time in many wonderful places and just last October we were in Liverpool.

Going to Liverpool was great and knowing that we would be able to spend some time there I had to get tickets to a reds game at Anfield. I had seen LFC play before on a couple of occasions when living in London many years ago, but the chance to see a game at Anfield was there and I had to be there too.

How to get tickets for a Liverpool home game

Sure enough, the days are gone when you could easily get match day tickets at the gates of the big clubs, even some not so big clubs are having sold out games. So how do you get tickets to Liverpool home games?

After doing plenty of research online at the LFC website it became clear that the only way to have a chance of getting a matchday ticket for the EPL (English Premier League) was to become a club member. You can’t buy tickets for LFC unless you have a club membership.

To do this you must choose a level of membership and pay the fee which can all be done online at the LFC website. It’s very simple and membership is immediate, with the goodies at the level of purchase sent by mail to your home address.

Once I had joined LFC as a Full member (35.99) I then purchased a Light membership (26.99) for Moni which meant that I could get two tickets to the games. (prices in GBP)

Which EPL games can you get tickets for?

This is the next challenge in getting matchday tickets for Liverpool home games. Here’s the thing, not all games are equal when buying tickets.

Some games are more prestigious than others, such as a LFC v Everton which is the local derby game is one of the hottest tickets in town. Of course the LFC v MUFC (Manchester Untied) is probably the next biggest ticket, then you can add to the list the games against Chelsea, Man City, Arsenal and a few others.

Those few others are the teams that finished high up the table the previous season. The EPL teams are grouped into 3 categories and each category has a different requirement when getting tickets. It is also different when buying cup game tickets. This screen shot below is an example of the criteria required.

When I knew we would be in the UK I checked to see what games would be on that coincided with our dates. Sure enough I had ONE home EPL game that was on a date during this time. That team that was playing at Anfield was Southampton.

Southampton was the club that in nearest to where I was born, the Isle of Wight, along with Portsmouth FC.

Knowing that the Saints had a good season last year I was worried that they’d be listed in the top seeded group and my chances of getting a ticket already be in vain, however lucky for me they were not and being in group two I was able to be in the running for tickets when they came on sale.

Having a fully paid up membership and knowing that the game I wanted to buy tickets for was fine I waited for the day to come. Liverpool FC put tickets on sale at different times of the year and you need to keep up to date with the club info at all times to stand a chance.

The day arrived and at 9am (actually earlier) I was logged into the website and once the sales opened I was in the queue… A word of warning, this queue is LONG. I waited over one and a half hours until my chance came.

The list of games and availability of tickets is updated every time your time slot is adjusted, by that I mean the closer you get to actually being able to buy a ticket. The sales go from Very Good to Good to Limited to Sold out.

This is a screen shot of a home game LFC v Swansea City showing the stadium and seating availability. 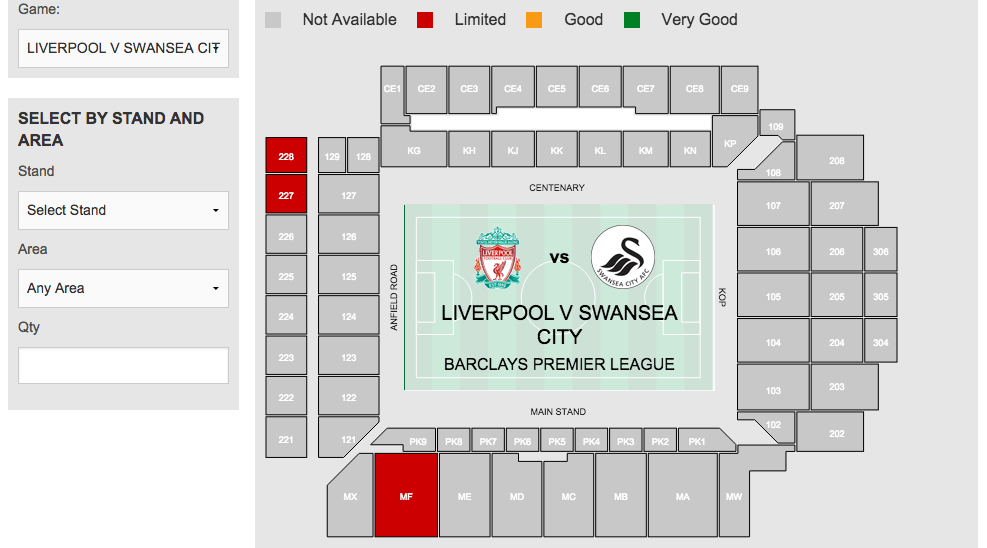 The screen display when buying tickets from the LFC website

A dream that all went wrong

My timer was counting down, but so was the ticket status… Over the first hour it changed from very good to good, then the next half hour it changed from good to limited… picture me sitting in front of my screen watching and waiting for all this time and sure enough about 2 minutes before my turn the status changed from limited to Sold out.

My head dropped, my dream was gone in a split second, so close from enjoying a childhood dream to see the mighty reds at Anfield. 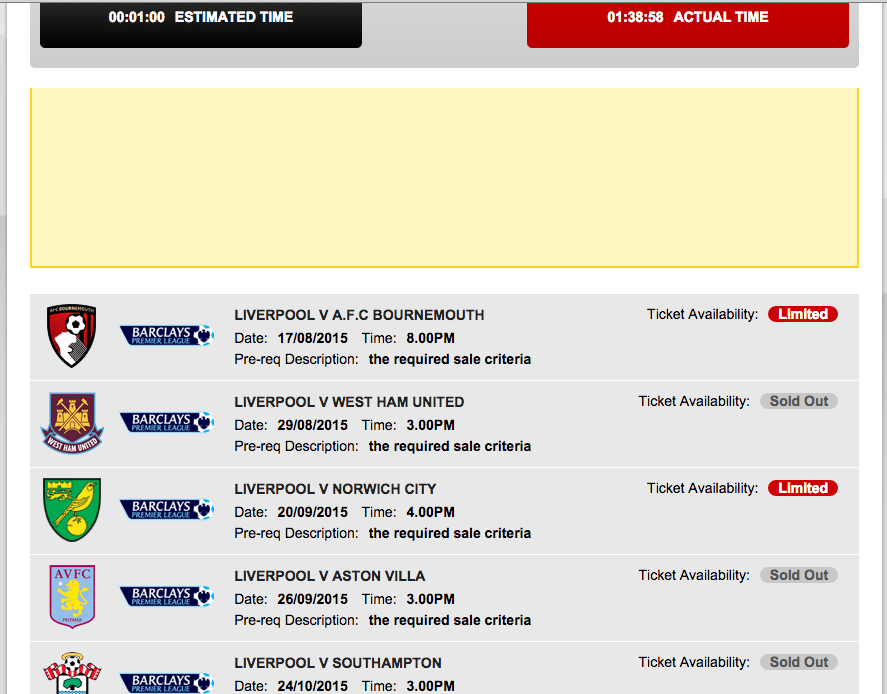 I was upset, sad, disappointed, angry, pissed off, livid, frustrated, whatever word you’d describe that emotion within. I sat and waited for my turn to come, there were still a few games left that had seats available, just not on the dates when we would be in Liverpool.

The timer was counting down (you have 30 minutes to make your purchase before being timed out.

I checked the status of a couple of other games that were on and took a look at how the system worked, each available game only had the odd few tickets left… And then, as I returned to the main list the Saints game was listed there and so I clicked…

It showed one seat left and I clicked BUY… the page refreshed showing SOLD OUT. Talk about another kick in the guts.

I refreshed the page again but to no avail. The countdown was nearing 8 minutes left and my hopes fading with each second.

I refreshed the page and went to the Saints game, still showing sold out I clicked around the stadium layout and then on one click it showed that same one seat left (severely restricted) and without hesitation as quick as I could I hit the buy button and waited…

and I filled in my payment details and the ticket was mine.

Holy cow I just got the very last ticket, I was overjoyed to say the least and had tears in my eyes after all that waiting, not just the past hour and 48 minutes but some 40+ years and it came down to this moment.

Even though I wanted two tickets so that Moni could be with me to share the experience I knew I had to buy it no matter what.

Tickets for the game

The tickets to the game are linked to the membership card that you receive in the mail from LFC. You do receive an email confirmation which the website recommends you print out and have with you when attending the game.

Apparently even as a non member you can buy tickets for LFC games. I’m not so sure if this is ever possible as each game is nearly always sold out way in advance. Even with a membership it is not a guarentee that you can get a ticket, remember how lucky I was.

With my ticket secured for a home game Liverpool v Southampton, I let the excitement begin to grow inside of me as I counted down the weeks… BUT there was to be another twist to the story and you can read it here.