What have we in store today? As always the Celebrity Today paper has all the answers, from Art Auctions, watch seminars to game shows, cooking demonstrations, feature presentations and lots more. 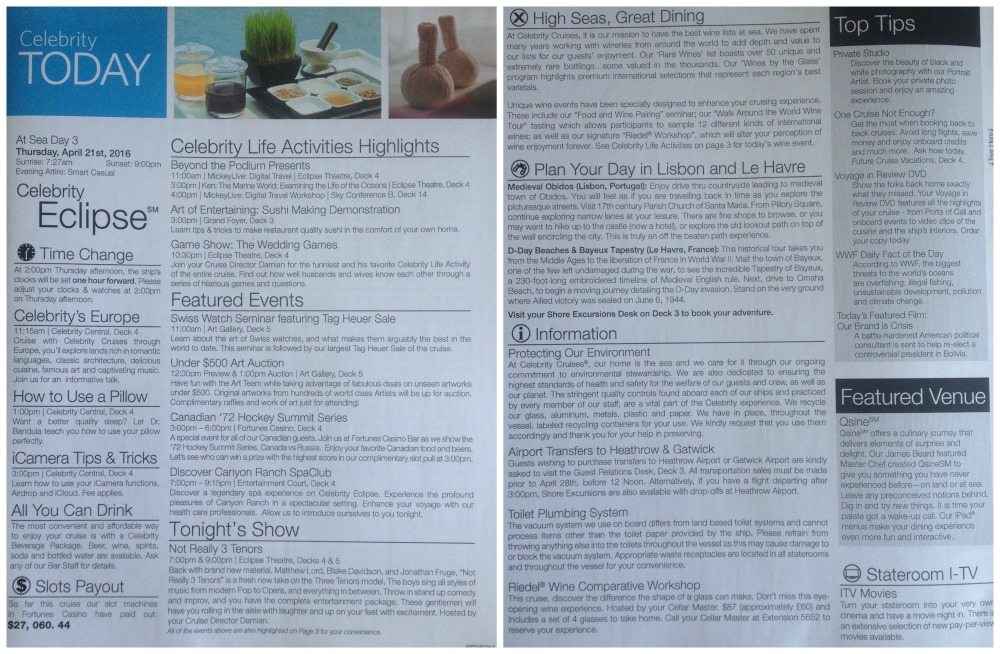 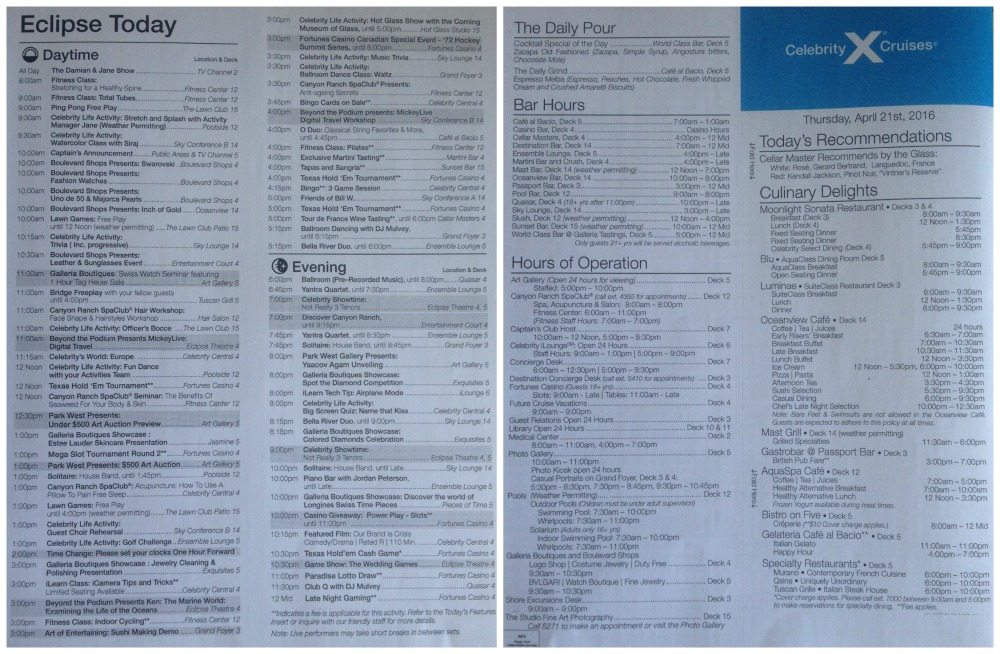 Our second breakfast or more like a continuation was from the buffet, after already enjoyed a smoothie and grapefruit from the Aqua Spa cafe. I took a few photos of some of the selection, I’m sure I missed plenty but this gives you an idea. 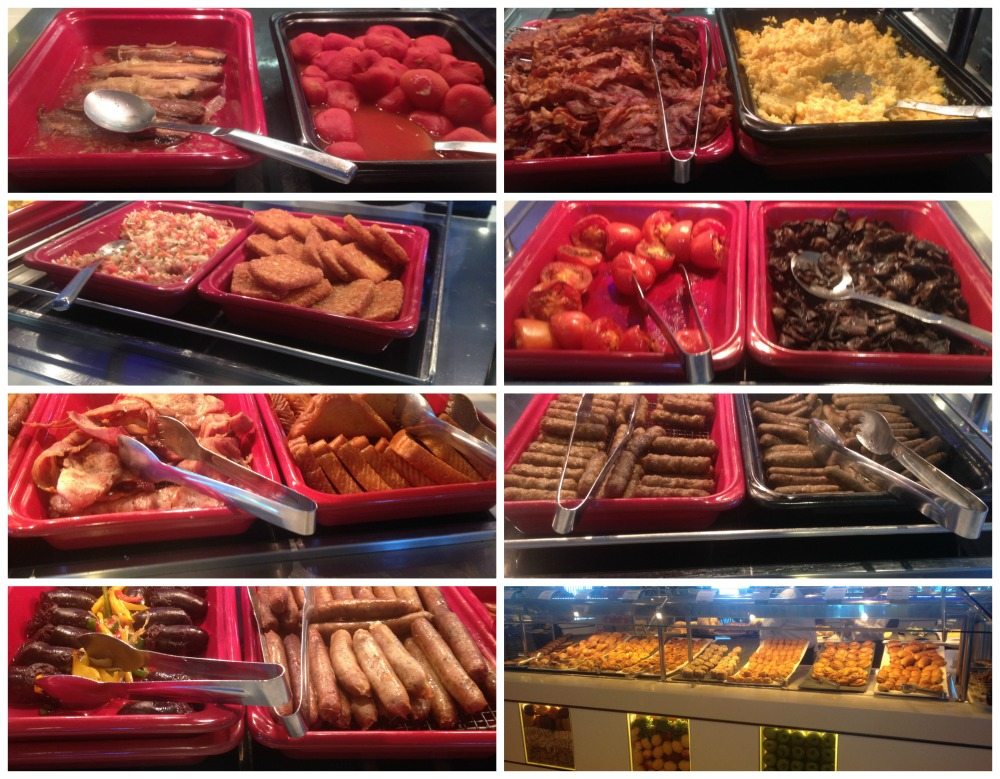 Breakfast selection from the buffet at Oceanview Cafe on Celebrity Eclipse 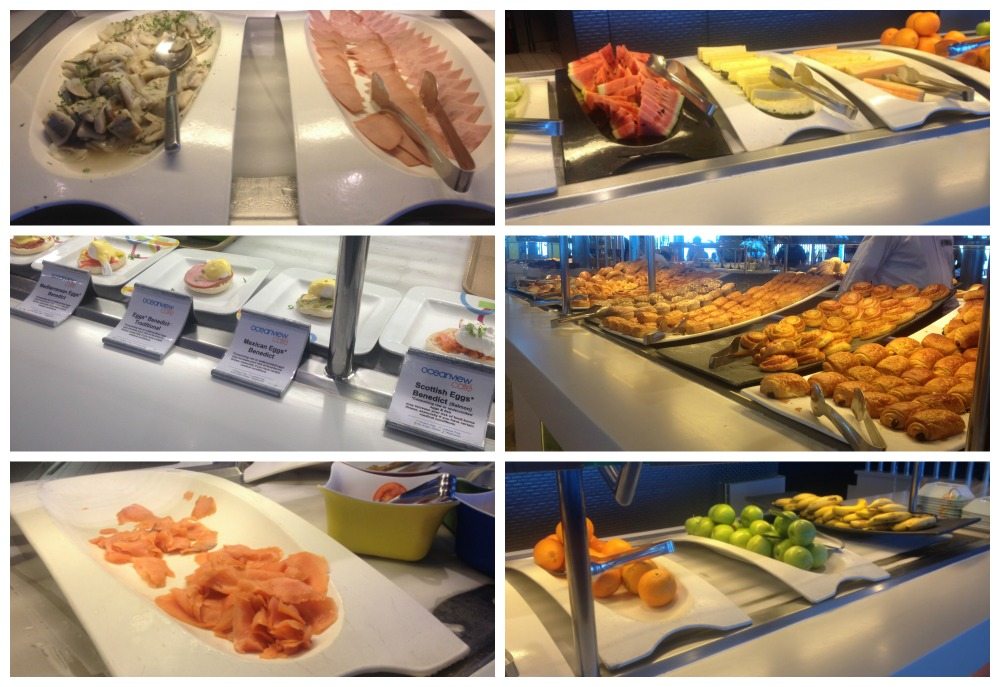 Feeling very satisfied and full, we needed some excercise, and it just happens that the table tennis tables (two of them) are one deck above the Oceanview Cafe.

Over the course of the entire cruise Moni & I played here many hours of fun. These tables are probably the best that we’ve found on cruise ships, by that I mean best bats, tables & net, but most of all they are located in a pretty good place away from busy traffic and the worst of all the wind. 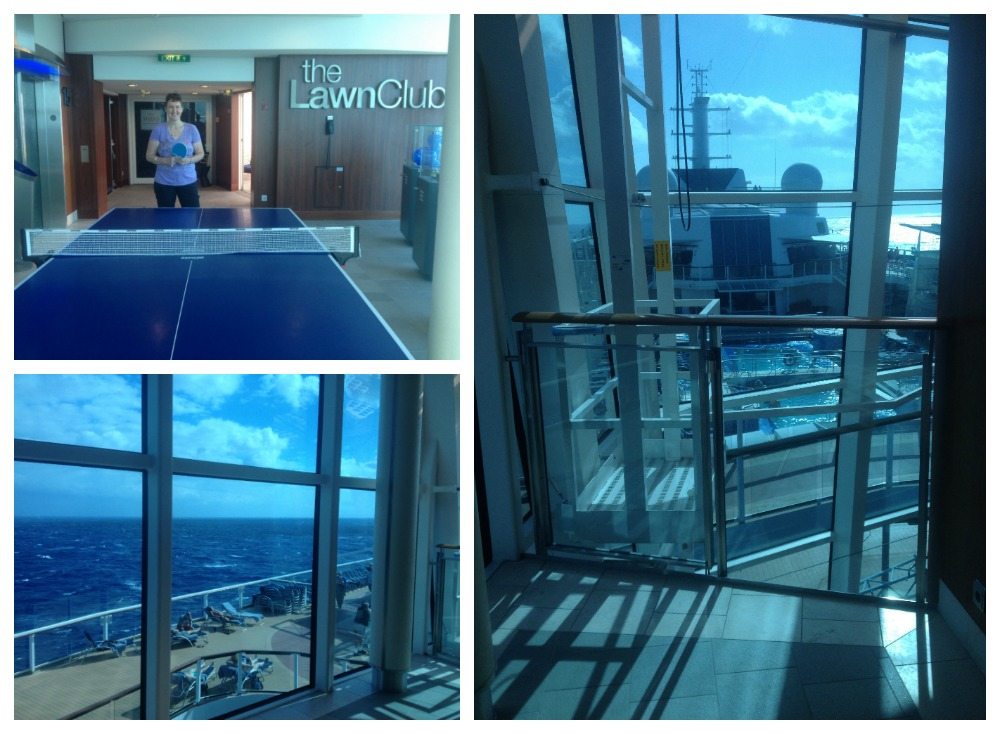 Table tennis on the Eclipse

After a marathon… game of ping-pong we needed a coffee, ha ha. Another nice touch with Celebrity cruises is that they provide a ‘mini newspaper’ from many countries. Basically it takes the most important headlines and topics and fills four sides of paper. For anyone who doesn’t have access to the Internet this is a way of keeping abreast of what’s going on back home, if you want to of course. 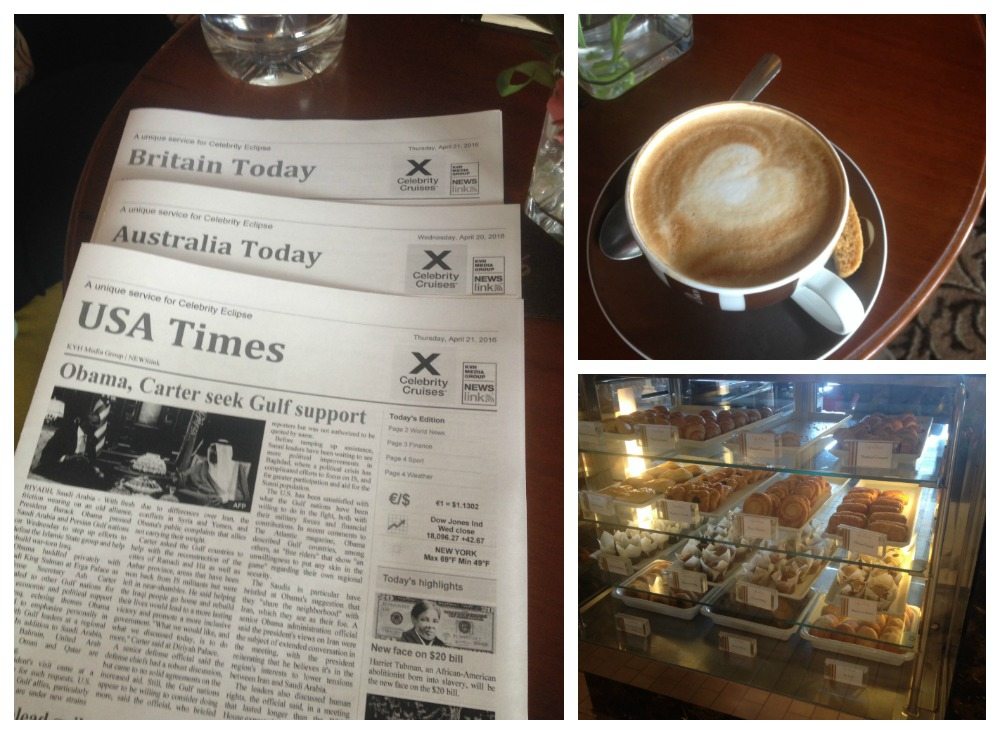 Coffee, pastries and the mini newspapers on Celebrity Eclipse 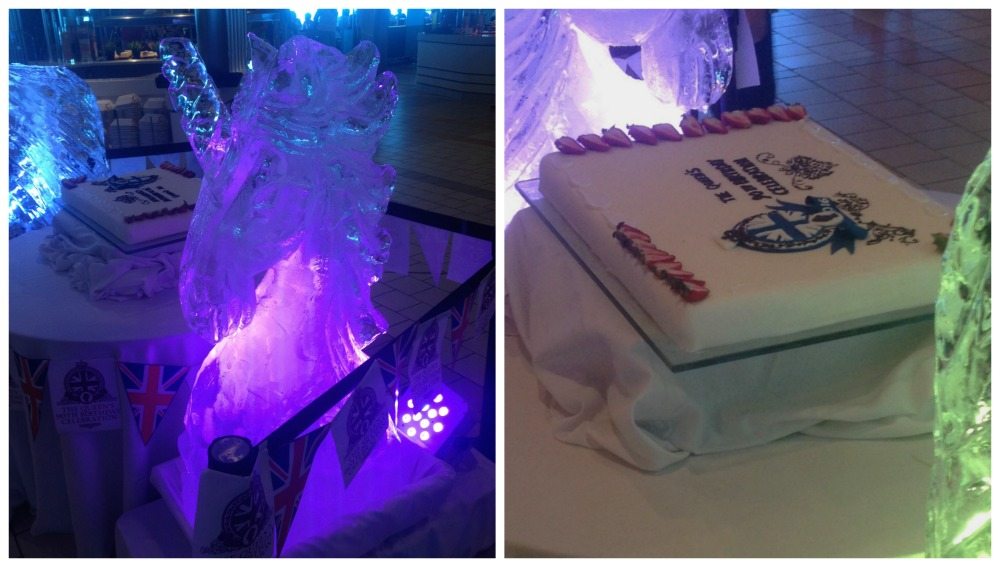 We indulged in a slice of cake to celebrate the Queens birthday, but rather than a piece of the specially made cake above we chose ours from the display in the Café al Bacio.

Time now for some relaxation on the balcony. 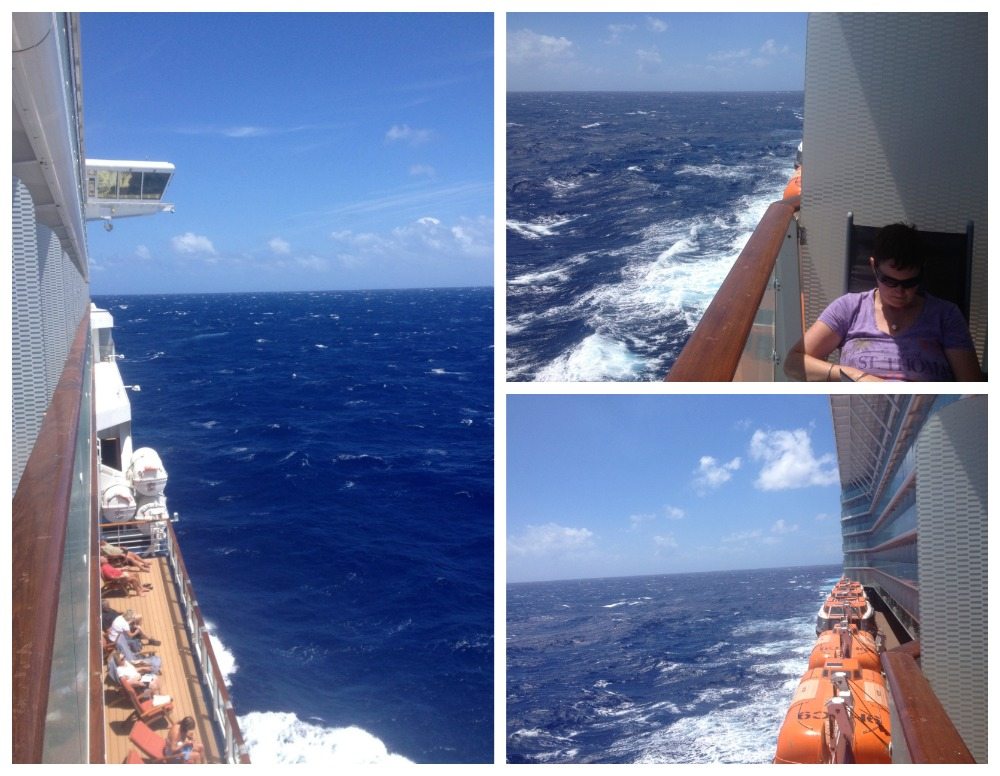 Another view from our balcony, a little choppy

That afternoon I left Moni with her book while I attended another of Mickey Live’s workshops, as you can see from the photo below it was very popular and people even sat on the floor… I think Celebrity need a bigger room for Mickey’s workshops.

Leaving the workshop I took a look in the Sky Lounge and was amazed how busy it was. Nearly every table and chair was taken and by the time I left (after chatting with friends) it was pretty full. The reason for it being so busy was, from 5 -7 pm each night, all Elite Captain’s Club members have happy hours where they can cash in the three drink vouchers per member for a variety of beverages. 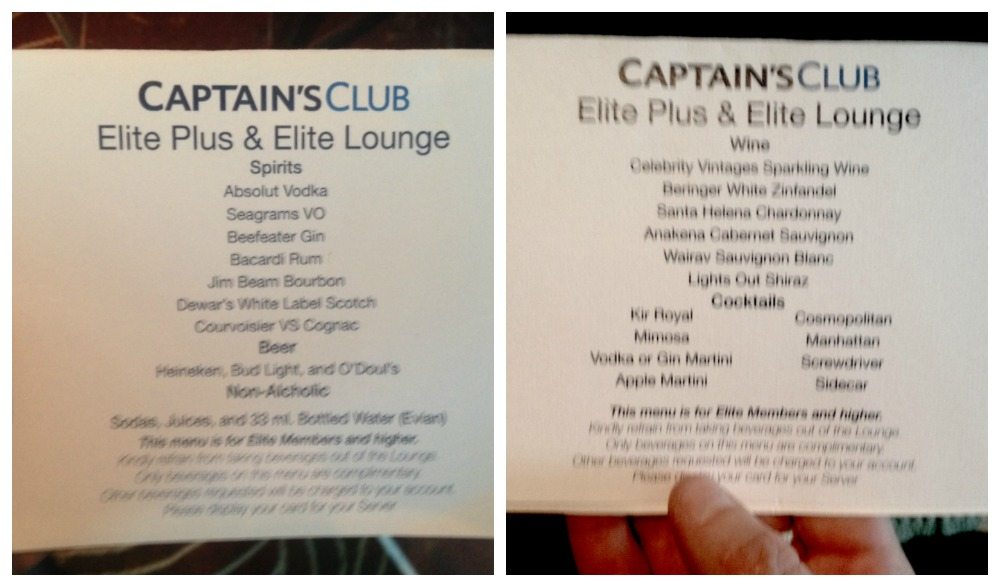 It’s not limited to the Sky Lounge however and any bar will accept the vouchers, but not all bars have the canapes that are also on offer from the staff that walk around with these offerings. Looks like we have got to work on getting to Elite status. 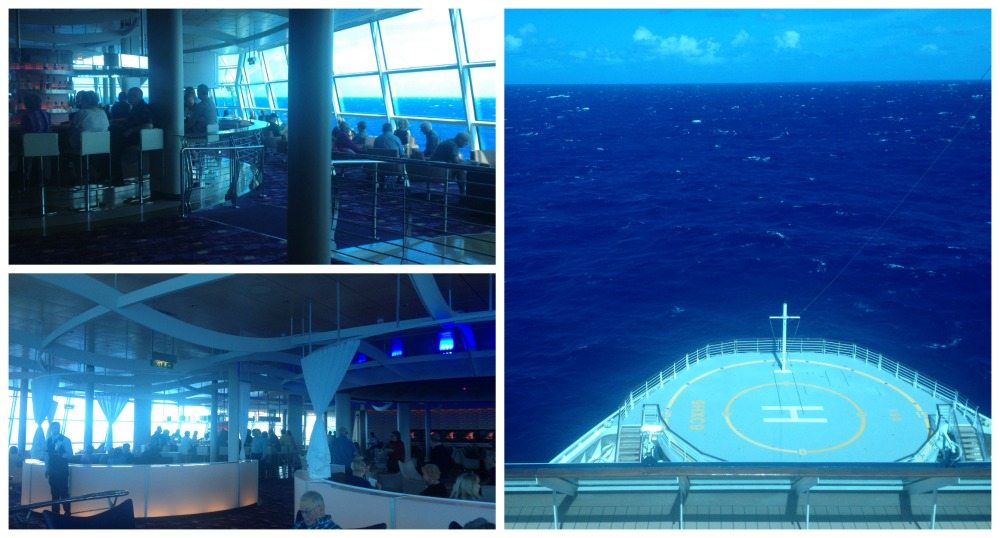 Back to the cabin just in time to shower and dress for dinner.

Dinner in the dining room 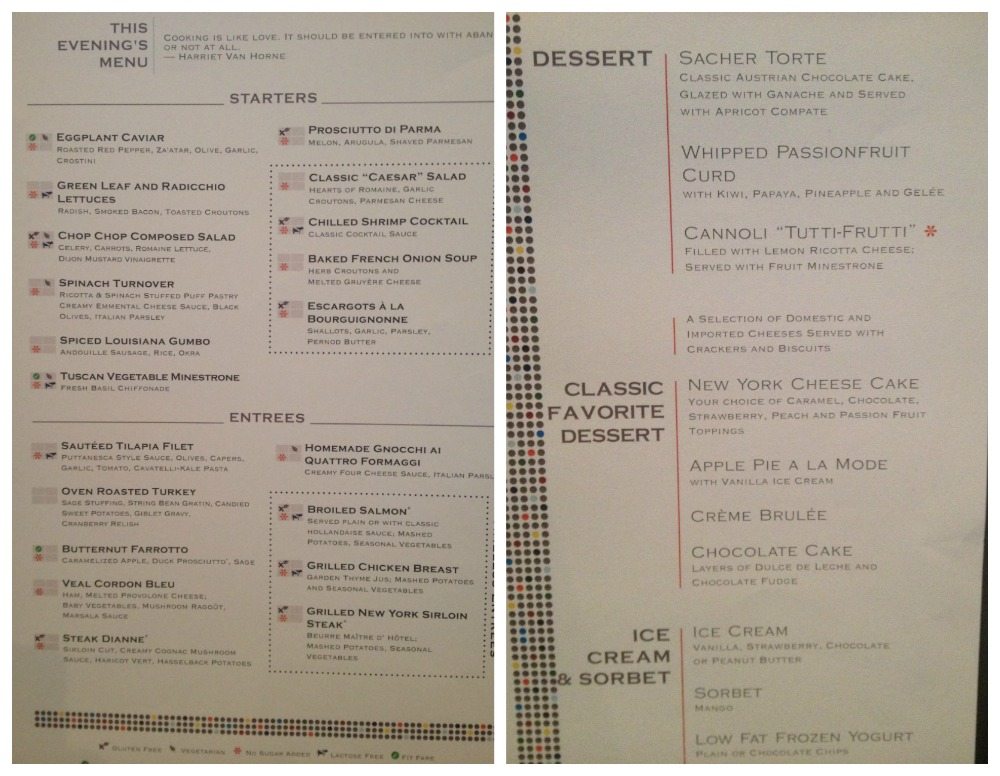 These were our starters, Mozzarella Cheese and Bell Pepper Empanada from the vegetarian menu, Prosciutto di Parma, Spinach Turnover.

Followed by… Homemade Gnocchi al Quattro Fromaggi for Moni and Steak Dianne for myself. Both very tasty and tender.

Moni had the Brulee again and remarked that it has to be one of the best, I chose the Sacher Torte, the classic Austrian cake which was also very nice. 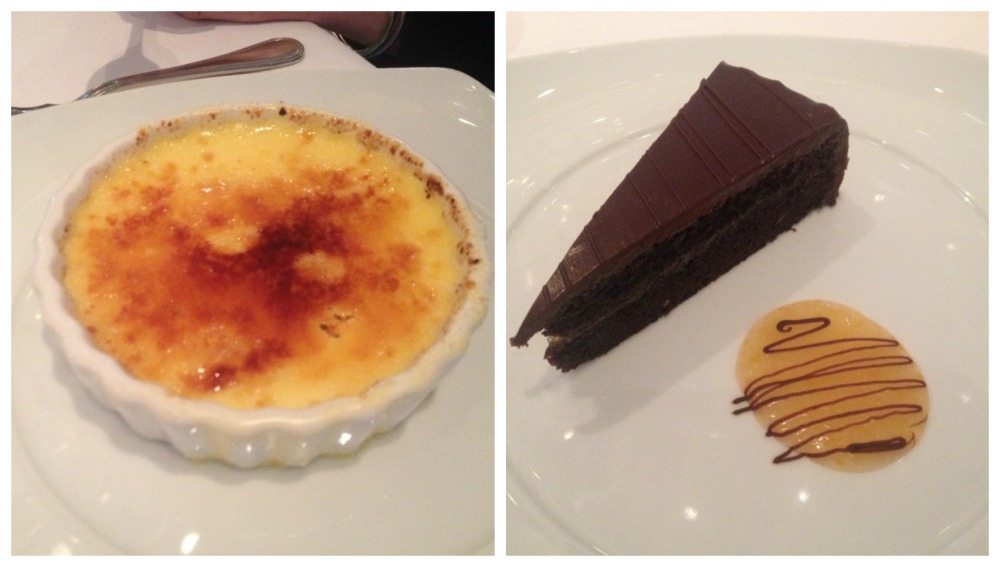 Desserts in the Main dining room

I’ll leave you today with a photo of the wonderful Moonlight Sonata dining room with its large center light display. 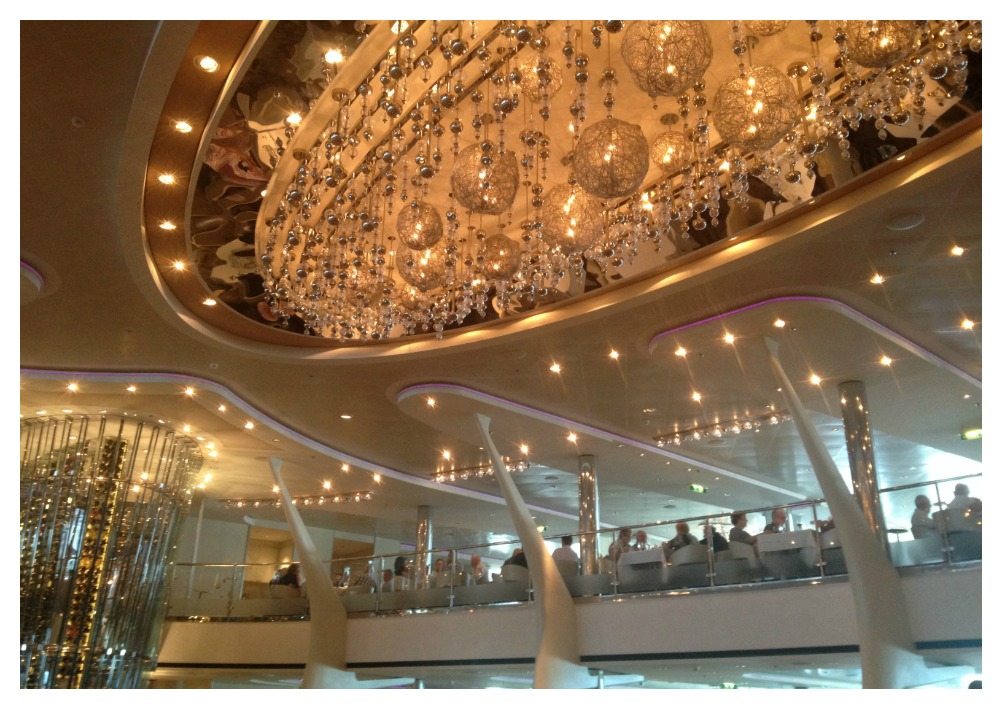 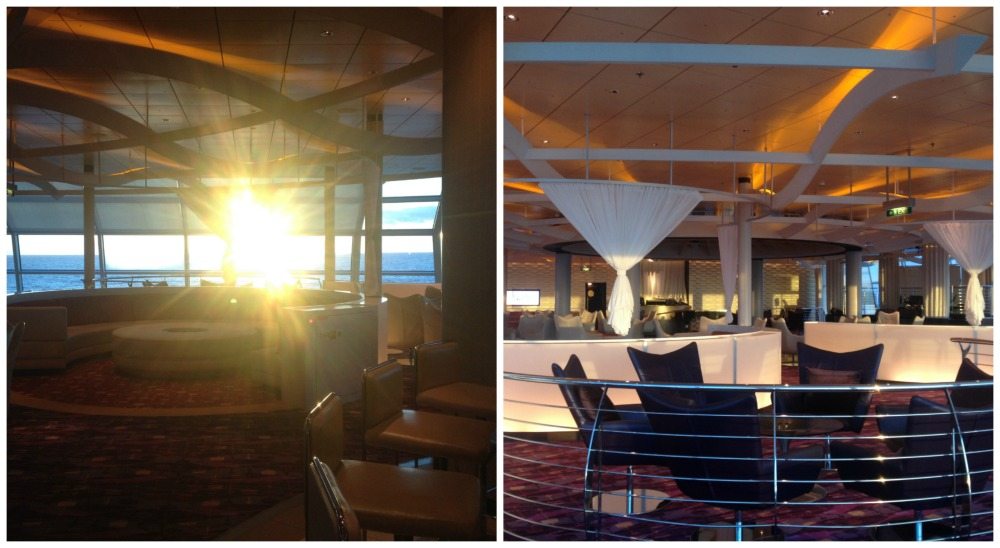 The sun shining into the Sky Lounge on Celebrity Eclipse 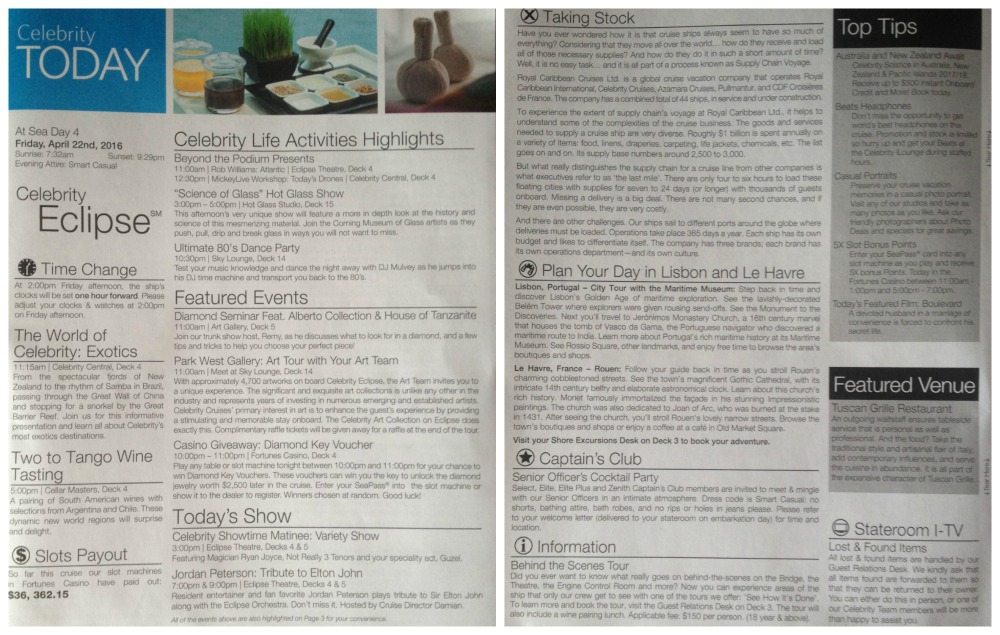 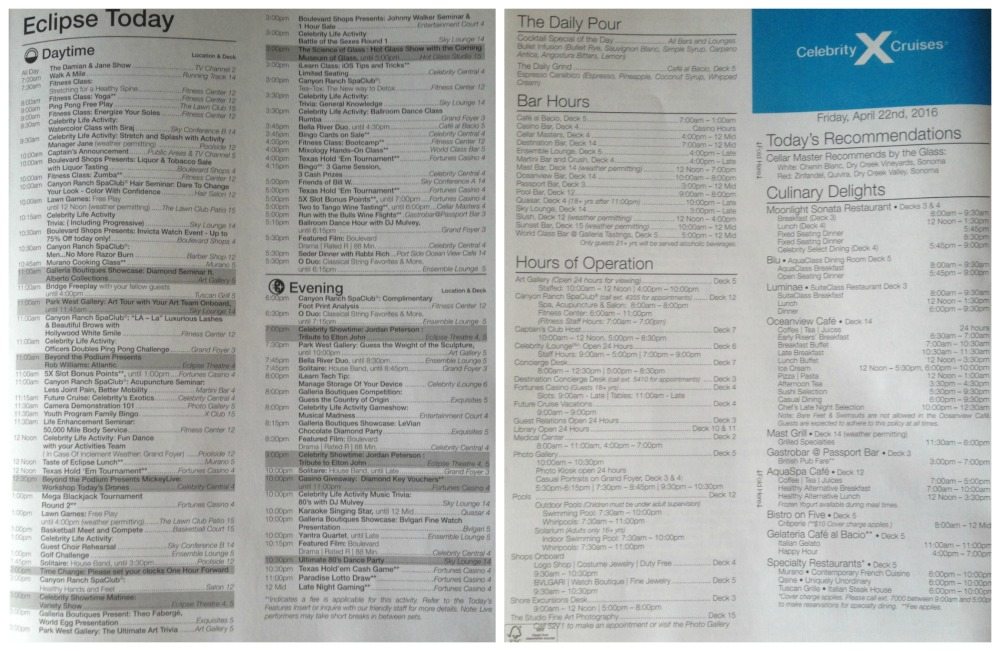 Breakfast at Oceanview Cafe on the Eclipse 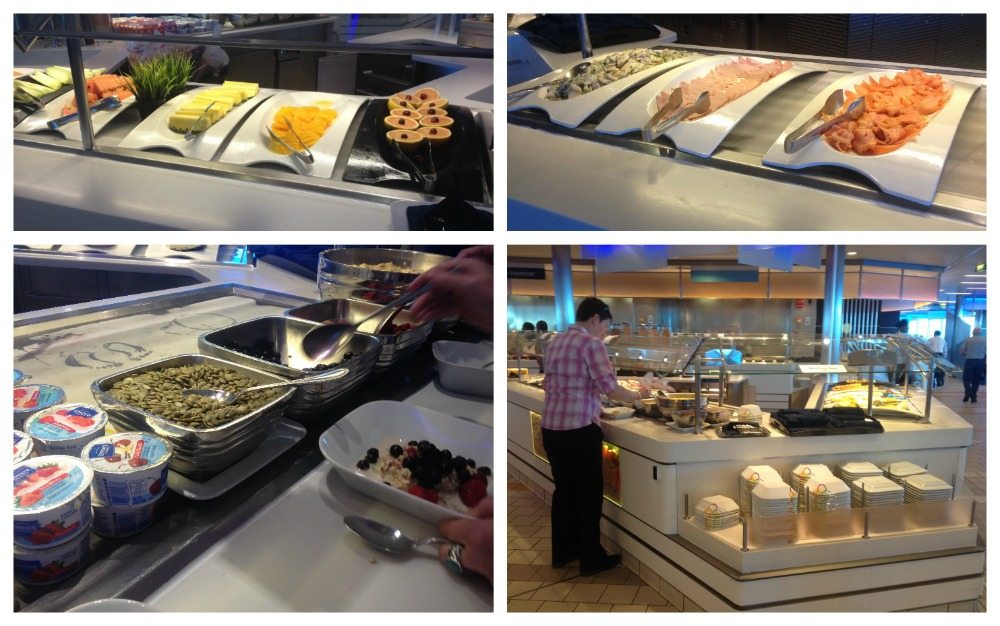 Breakfast at Oceanview Cafe on the Eclipse

And here is a photo of how my hot breakfast looks most mornings when cruising. 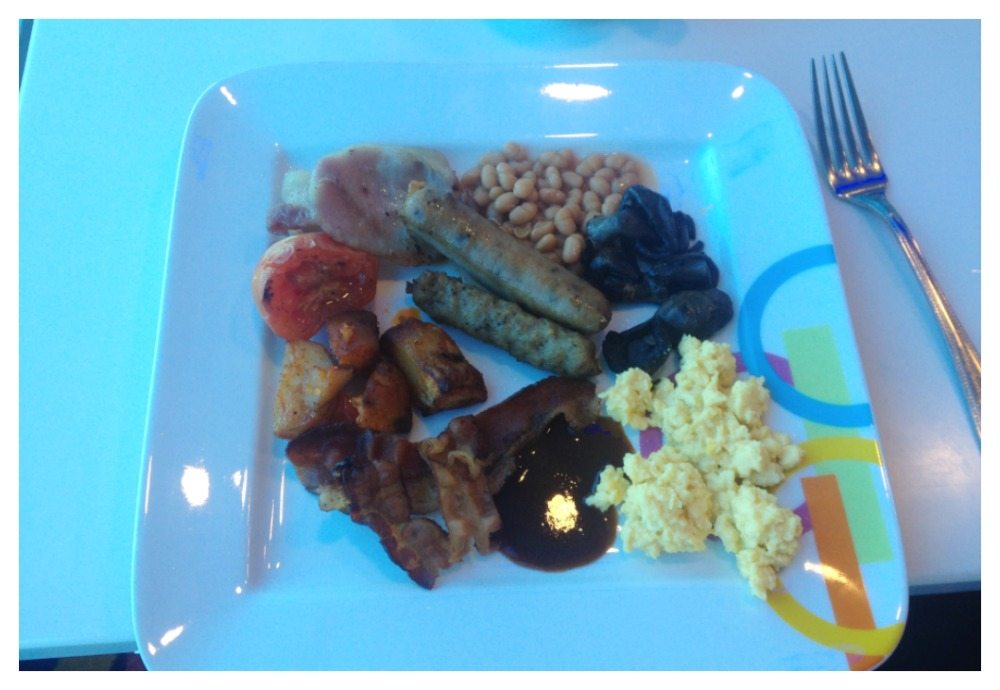 My plate of hot breakfast 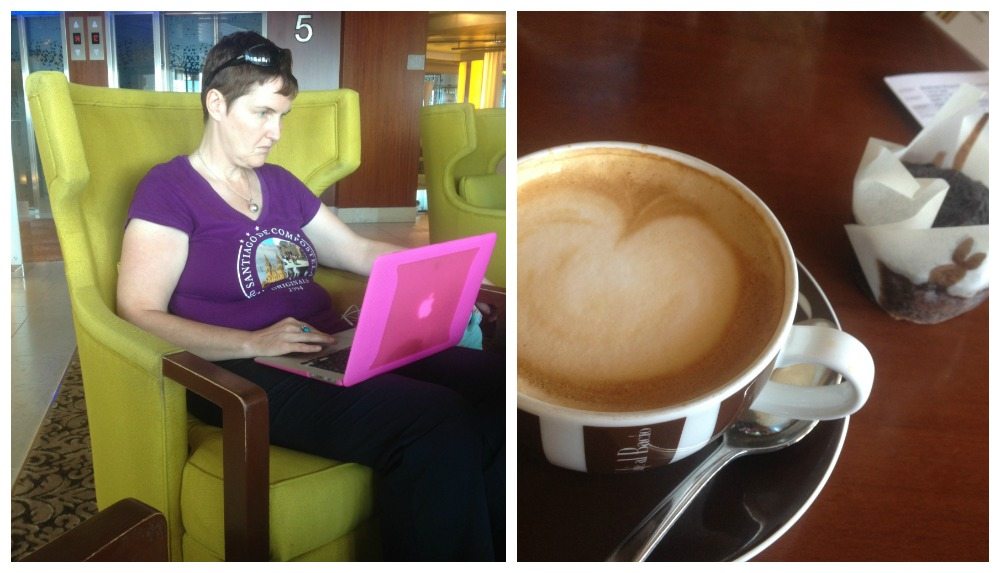 While I listened to Rob Williams give a talk ‘Atlantic’. He calls it Atlantic and not the Atlantic which is correct, it’s not the Lisbon or the London. His talk was very interesting, parts about the sea life, ocean currents, Sargasso Sea that we cruised through and about Bacteria & Viruses in the oceans. I really did enjoy this talk, I’m finding the older I get the more I’m interested in these topics. 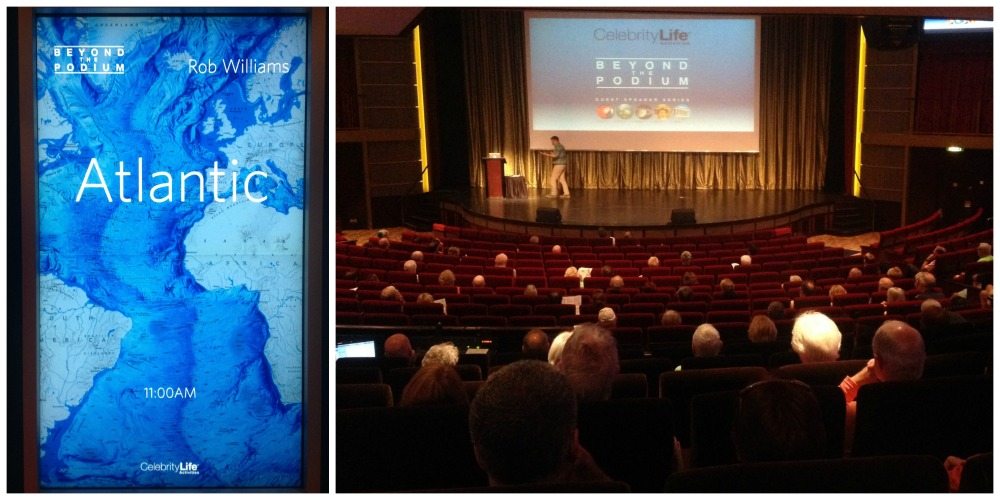 As we walked past the pool on the way to lunch, an energetic crowd were working off breakfast, and for a split second it crossed my mind to join them, but lucky for me it was only a split second. 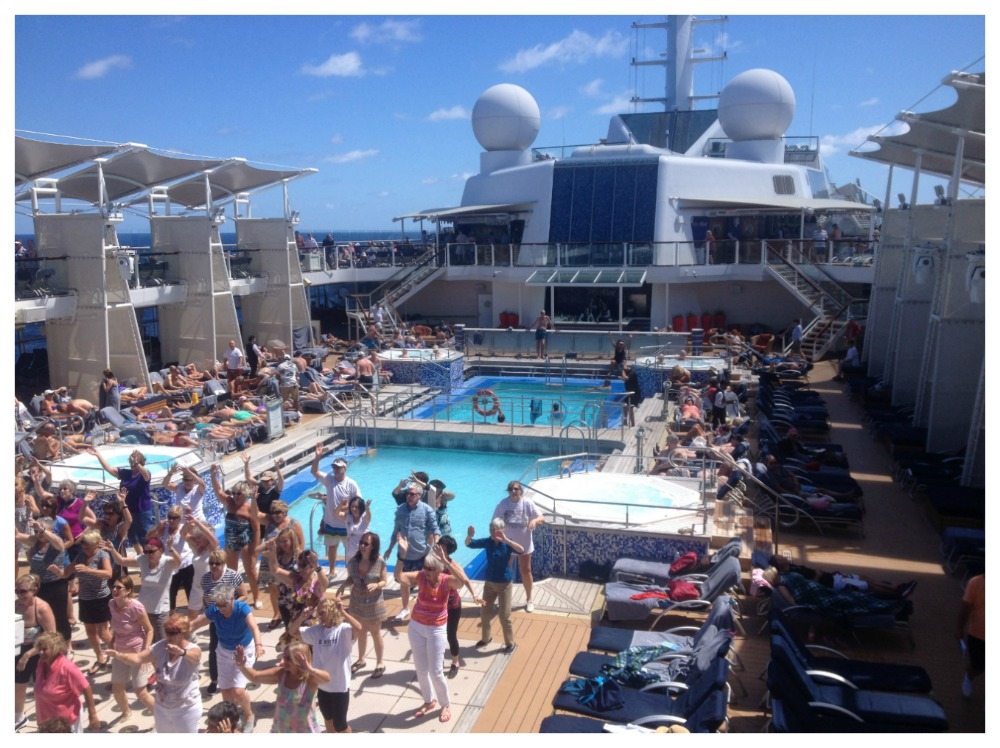 Entertainment by the pool on Celebrity Eclipse

Mickey Live had talked to us about the 2nd love of his life, after Jelena his wife… his beloved drone. It’s been a bit of a saga really and one that would keep this post going for days, so in a nutshell… Mickey had his drone confiscated by security when boarding in Miami and it’s been in lockdown ever since.

Today however Mickey’s workshop is all about ‘drone’s’ and he was kinda hoping that security would let it out for an hour. And a as they often say, a picture speaks a thousand words… That bright green container is home of the drone. 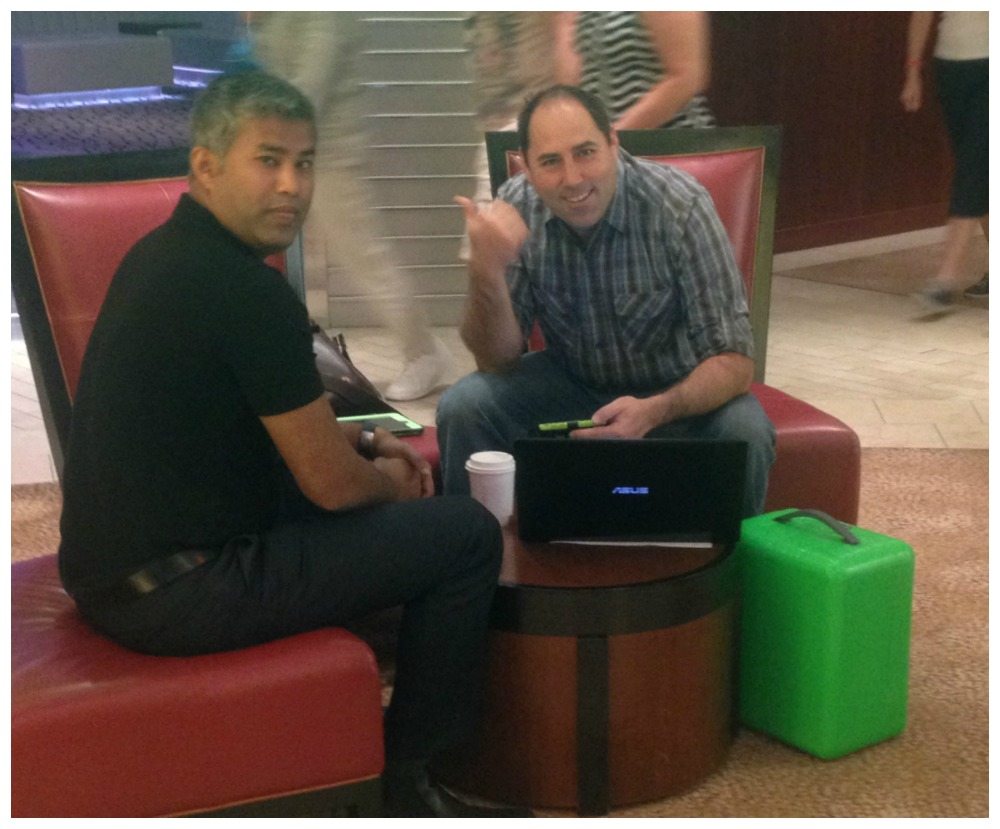 Mickey getting his drone from security 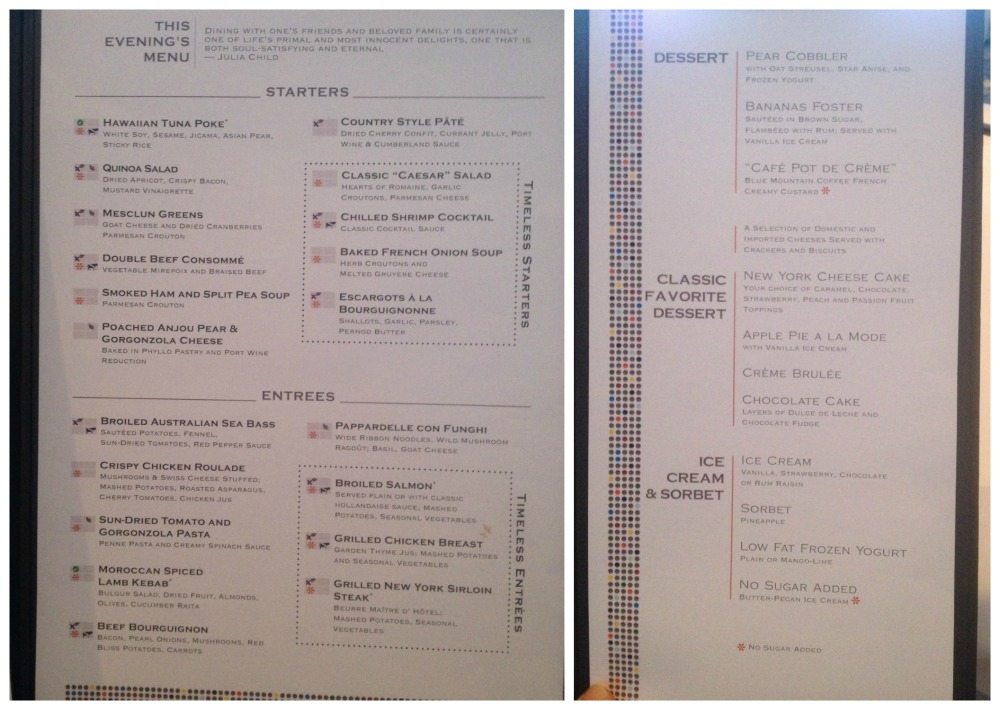 For our main meals (entrees as they call them in the USA) Moni had the Broiled Salmon from the Timeless selection. The timeless selection on the menu as the name suggests is always available and never changes, these items are classic dishes and maybe a little plain.

A good option for those that can’t find anything that appeals to them from the ever-changing daily menu. I’d like to add to that comment… Unfortunately the menus do tend to have a lot of repetition among the dishes in starters and entrees.

If you look at tonight’s menu for example, many dishes contain cheese, some even the same cheese, then the pear in two starters. I pick up on this most evenings and I think it’s a real shame that repetition occurs like this. Maybe it’s just me being the analytical chef that I am, but it can and should be avoided.

Main course choice at dinner in the Moonlight Sonata

Nevertheless, these were all delicious.

Desserts from this evenings menu

On the way to the theatre for tonight’s show a lot of people were gathered around the balustrade looking down… It was a game show ‘Music madness’ where a snippet of a tune is played and you run up to the chair and reveal who or what the tune is.

This was quite a spectacle with guests battling it out to get to the chair first, some even falling over themselves. A prize was given to for each correct winner in the chair. 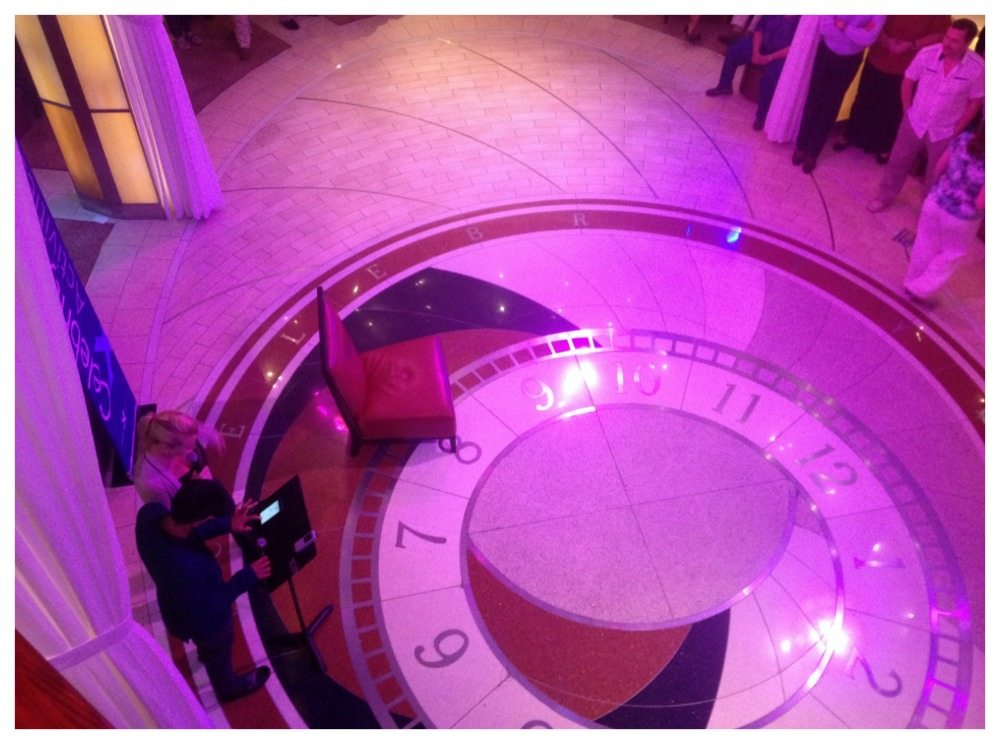 Some entertainment outside of the night club

We would have got a few of the tunes right, but the tunes we really wanted to hear where hopefully going to be played in the theatre.

Tonight in the theatre was a tribute to Elton John

The resident pianist Jordan Peterson has his own show and actually it is his last for this contract on Celebrity, so we were very lucky to see it tonight. He plays the piano around the ship as well.

His tribute was great, playing some of EJ’s greatest hits. Even though Jordan didn’t wear elaborate costumes like EJ he certainly knew how to perform like EJ. Highly recommended if you’re and EJ fan. 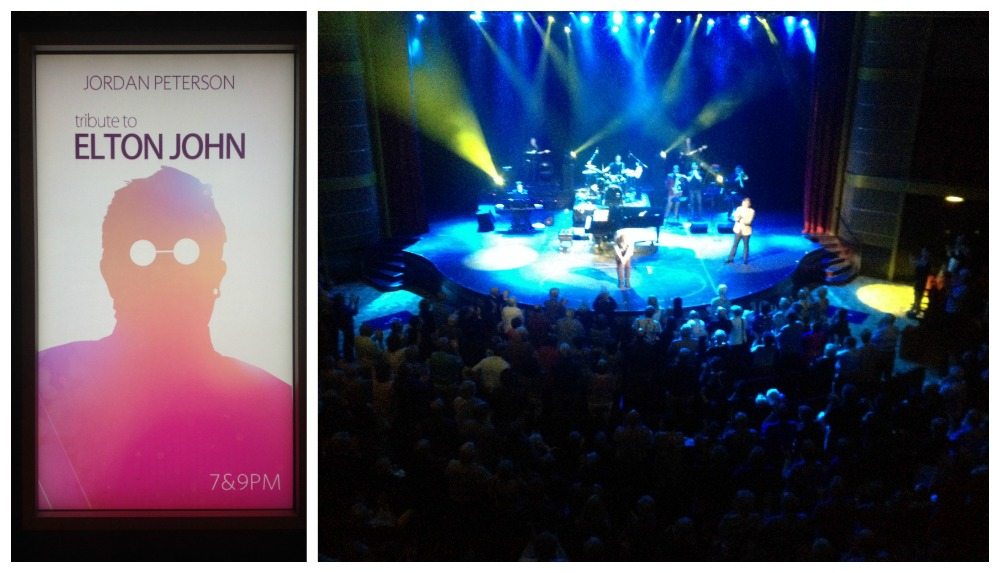 After a late night snack from the buffet and a cup of herbal tea it was time for bed. I haven’t mentioned it yet, but Celebrity do have a nightly turn-down service which includes a chocolate on your pillow. Some cruise lines have stopped this which is a shame. 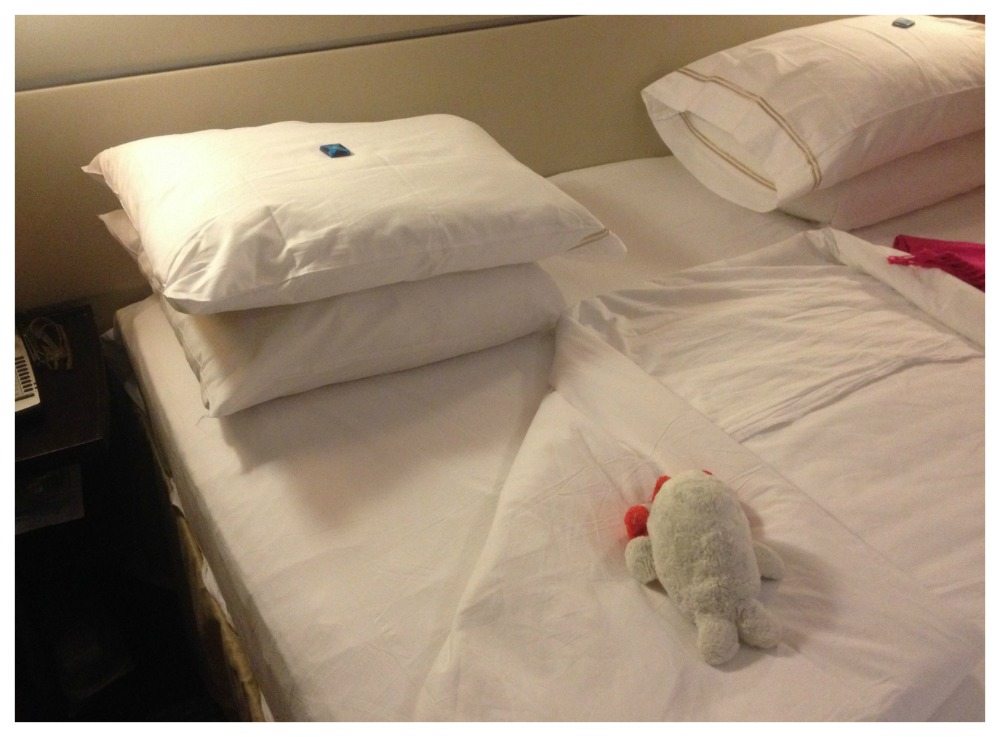 Let us know in the comments below

We’d love to hear from you, tell us about your experiences on the Eclipse or any other Celebrity cruise ship that you’ve been on.

Are you enjoying the review? How would you rate the Solstice class ships? What’s your favourite place onboard the Eclipse? Would you book again with Celebrity?