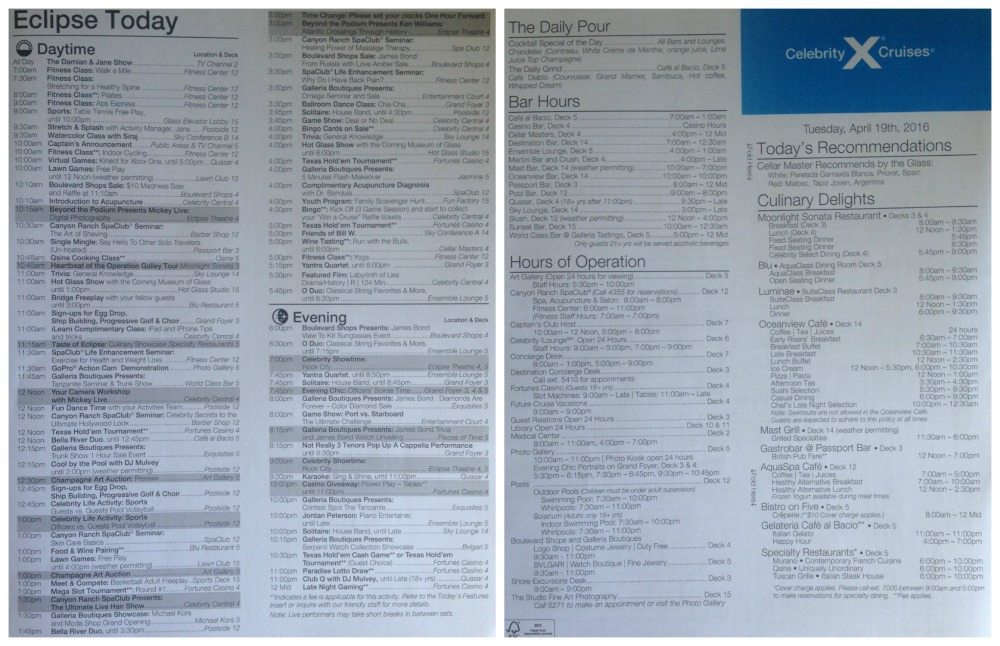 Breakfast from the Aqua Spa

Slowly but surely this little cafe is becoming more popular. It was only a matter of time, not that it matters at all it’s never going to become as popular as the main buffet for breakfast. Being situated towards the front of the ship and with wonderful views to the ocean it has to be one of the best places to start your day.

A couple of grapefruit halves, some mini muffins, a juice and smoothie, a cup of tea, some black juice for Moni and you can easily pass a good hour here. 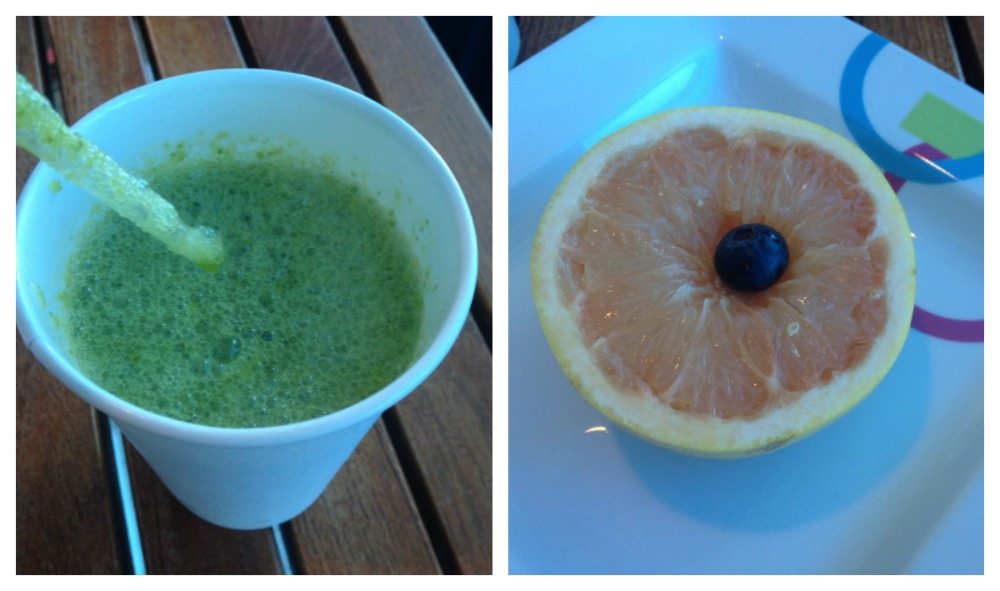 Juice and grapefruits, the healthy choice from the Aqua Spa Cafe

Great views from the Solstice deck

Being rather early in the morning and with most people who are up and about enjoying breakfast the front of the ship up on the Solstice deck was empty.

Here, on the highest deck aboard the Eclipse you could lounge around all day in the sun if you wished, protected from the winds by the glass panels or just sit in one of the comfy chairs.

Just below the Solstice deck you find the half-size basketball court, and walking around here you get awesome panoramic views especially of the front of the ship. 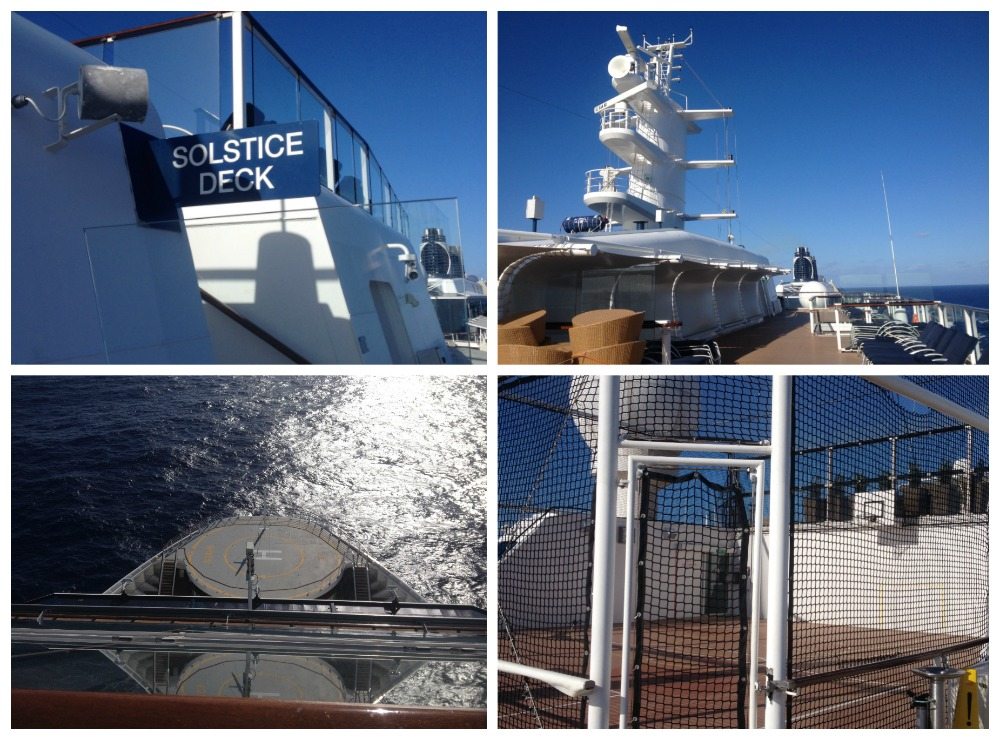 Beyond the Podium presentation

After our breakfasts and a coffee in the Café al Bacio it was time for the first of the Beyond the Podium presentations. Mickey Live talking on the topic of Photography in the theatre.

These Celebrity Life presentations last around 45-50 minutes depending on how many questions get asked, as a rule Mickey gets lots of questions. The first time we were on Celebrity I thought these were going to be boring lectures, but when I saw Mickey talk the first time it was a breath of fresh air. Not all presentations are this good though. 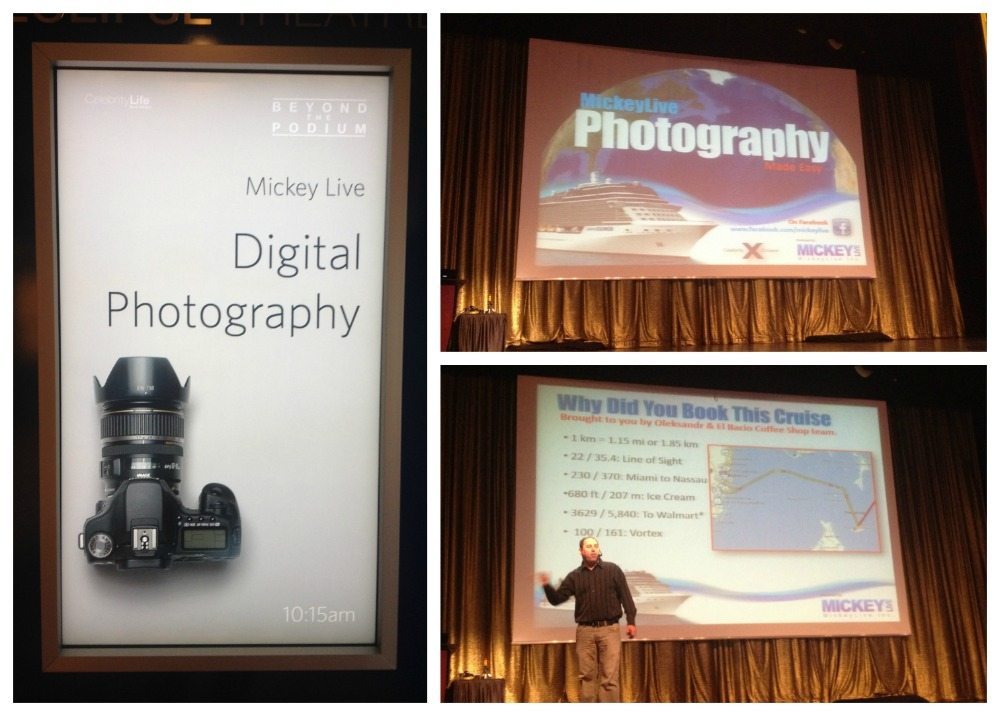 Mickey Live ‘Beyond the Podium’ on Celebrity Eclipse

We had lunch with Jelena & Mickey and then played some table tennis for an hour. The really good thing about this cruise is the lack of rug rats running amok (that’s children) and lucky for us, the ping-pong tables were nearly always free.

The afternoon camera workshop in the Celebrity Central was good, getting some tips and tricks. We then spent the rest of the day relaxing and chatting.

6pm dinner in the Moonlight Sonata 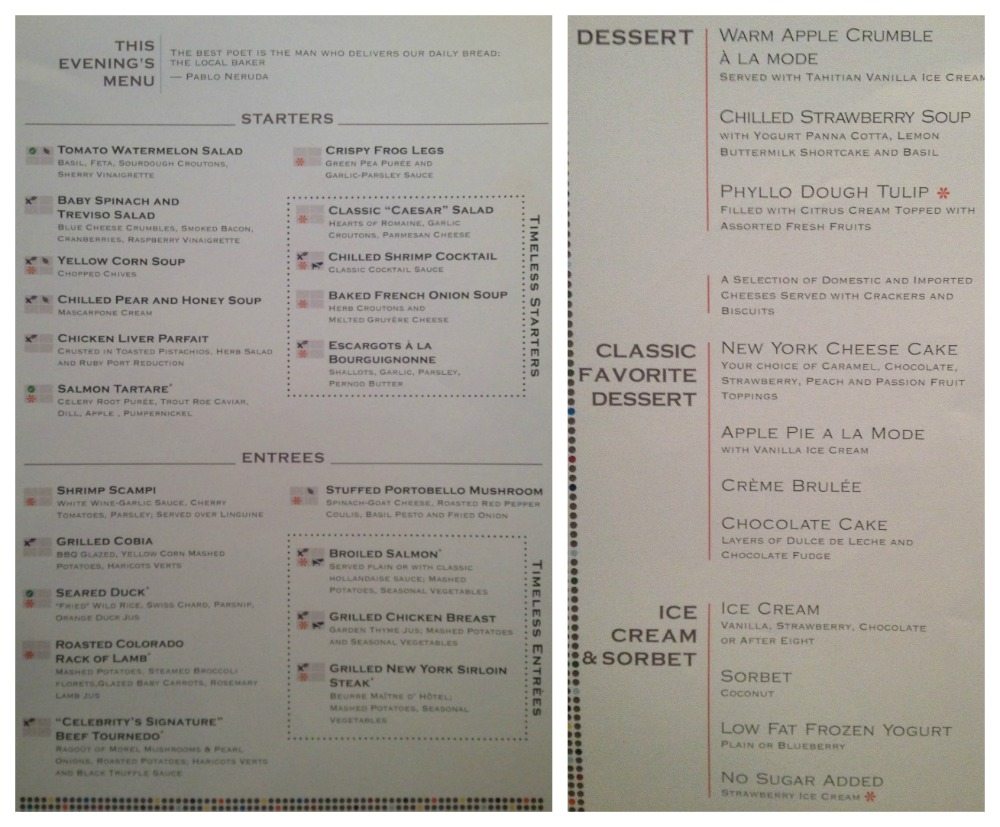 Between us we enjoyed the Salmon Tartare, the Yellow Corn soup,  salad from the vegetarian menu and the Chicken Liver Parfait. As you can see, the presentation was very good and they all tasted delicious, well done Celebrity kitchen team. 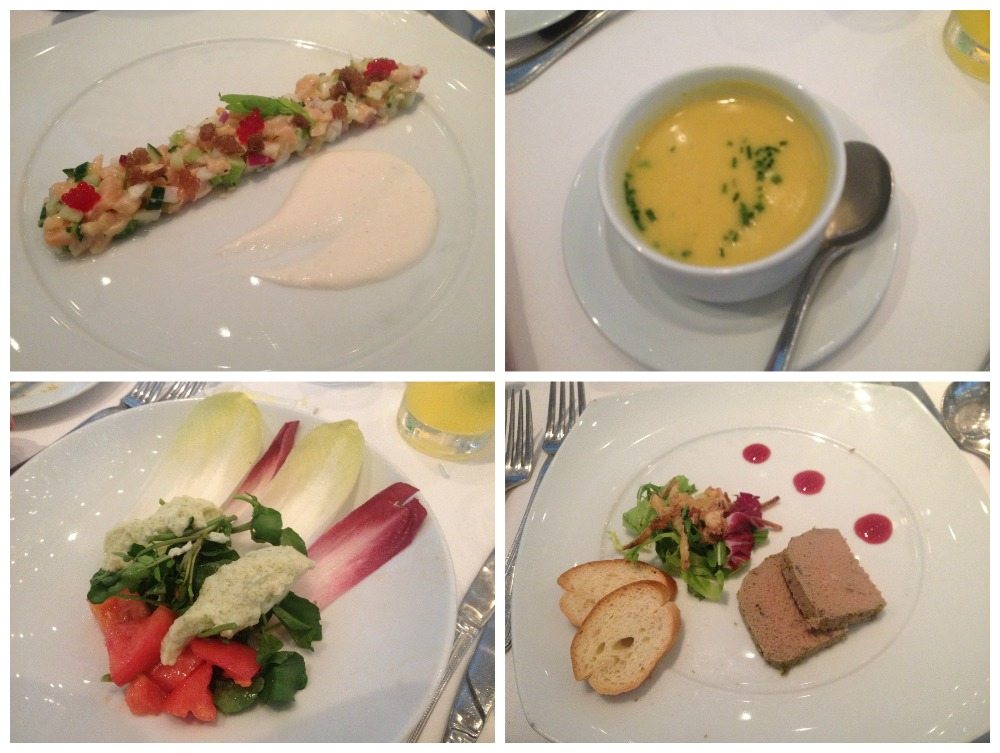 Our main meals of choice were the Celebrity Signature Beef Tournedo for me and the Stuffed Portobello Mushroom for Moni, once again both very good. 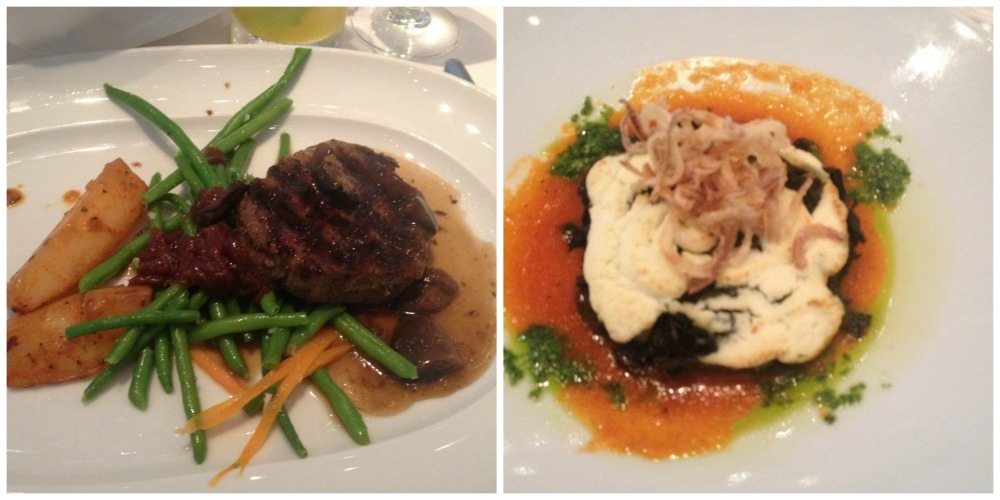 Moni chose the Creme Brulee and I settled on the Warm Apple Crumble again both very good indeed. Tonight’s meals on Celebrity Eclipse were some of the very best in any main dining room. 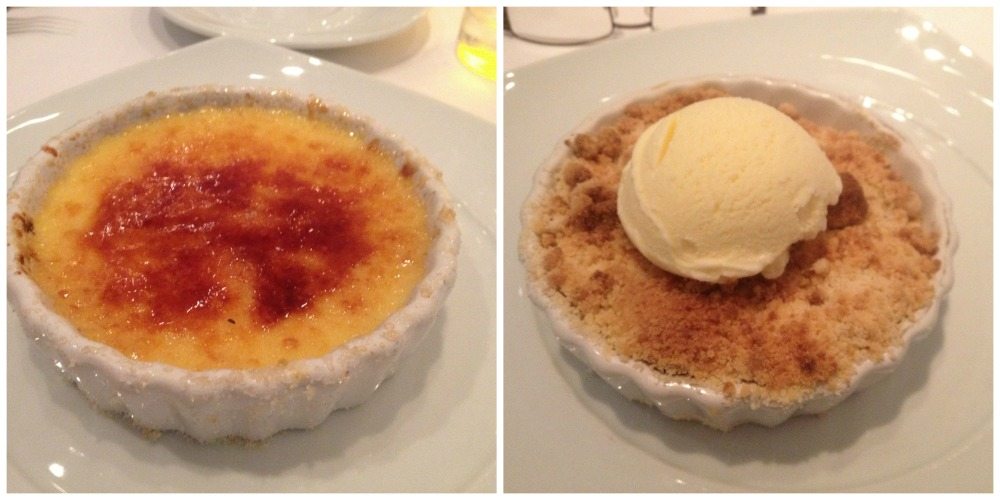 After dinner we were heading towards the theatre when we bumped into Mickey & Jelena who invited us to join them. The next few hours flew by as we chatted and had some coffee’s and beverages.

Another beautiful morning greeted us somewhere in the Atlantic. 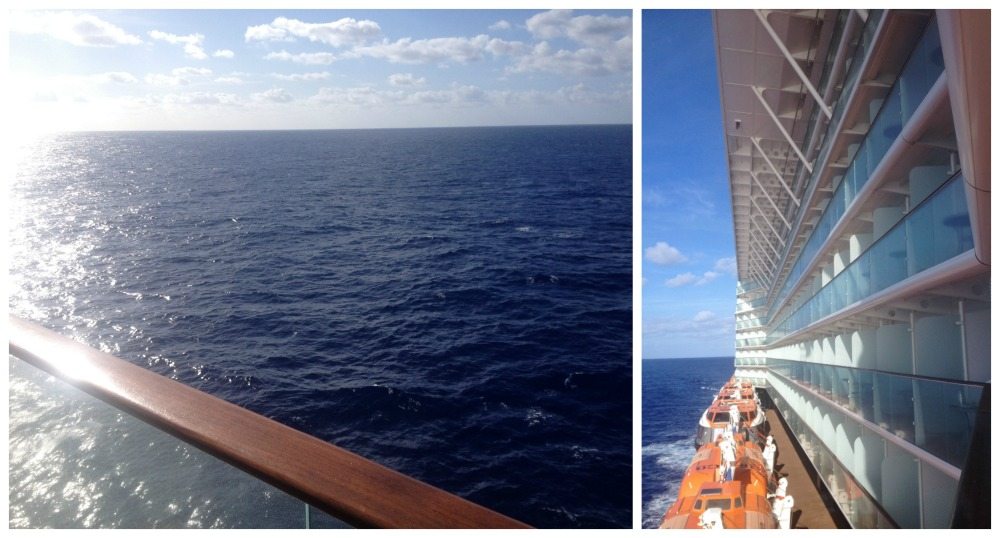 Early morning view from the balcony somewhere in the Atlantic 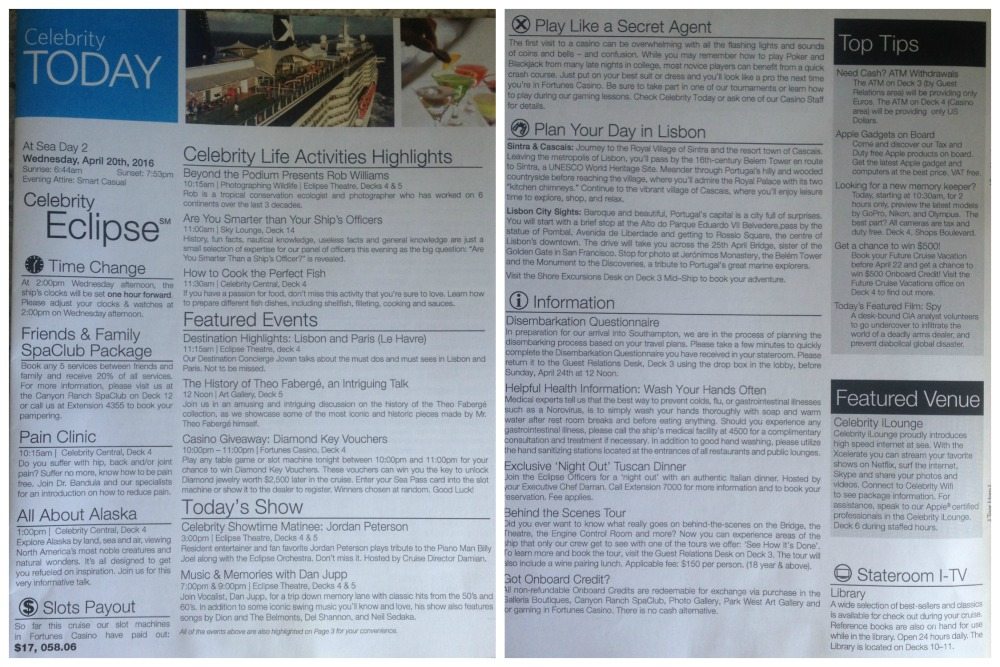 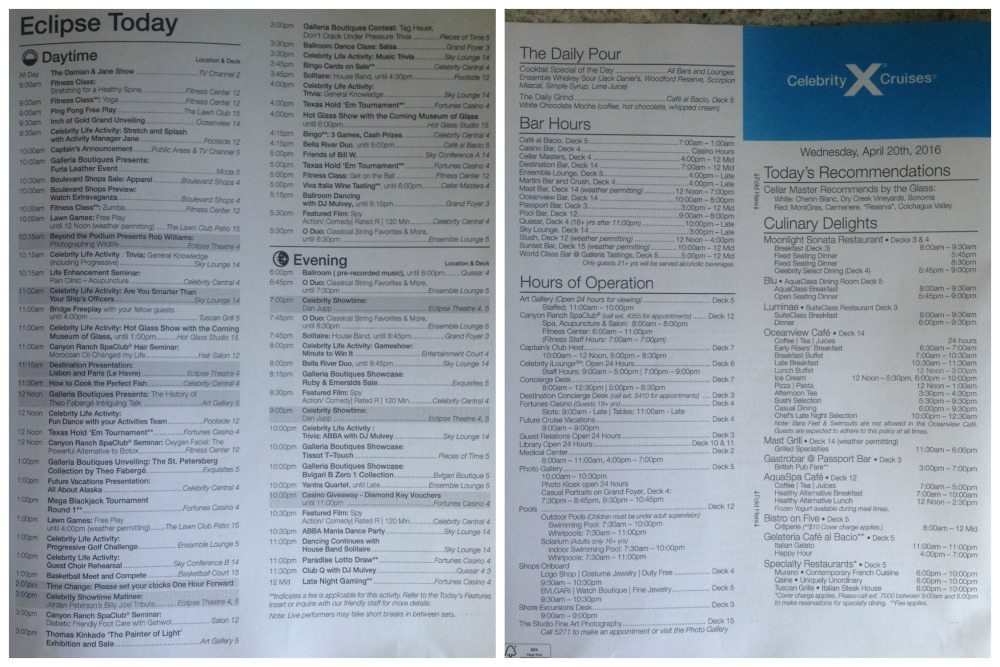 The great thing about these guides to the days events and activities is that before going to bed we can see what we’d like to do the following day and decide if we want a busy day or relaxing day. They were often printed by about 5pm the day before for those that wanted them hot off the press.

Beyond the Podium presentation from Rob Williams

After breakfast I went to listen to another Beyond the Podium presentations, this time from Rob Williams. Rob’s talk was about photographing wildlife. The talk was very interesting and a good crowd turned up to listen.

Rob happens to have had photos published in the National Geographic which is not just your average magazine, so it just goes to show that Celebrity really do have good presenters. 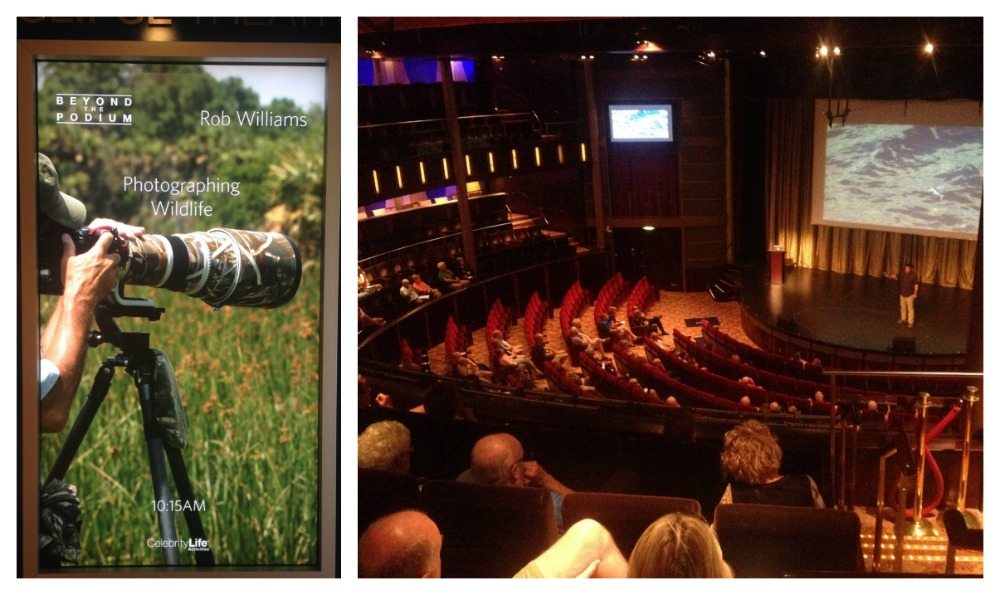 Rob Williams Beyond the Podium presentation

Next up was lunch once again from the buffet. I didn’t have much cheese for lunch but I wanted to show you that there was plenty of cheeses on the ship, each day slightly different. 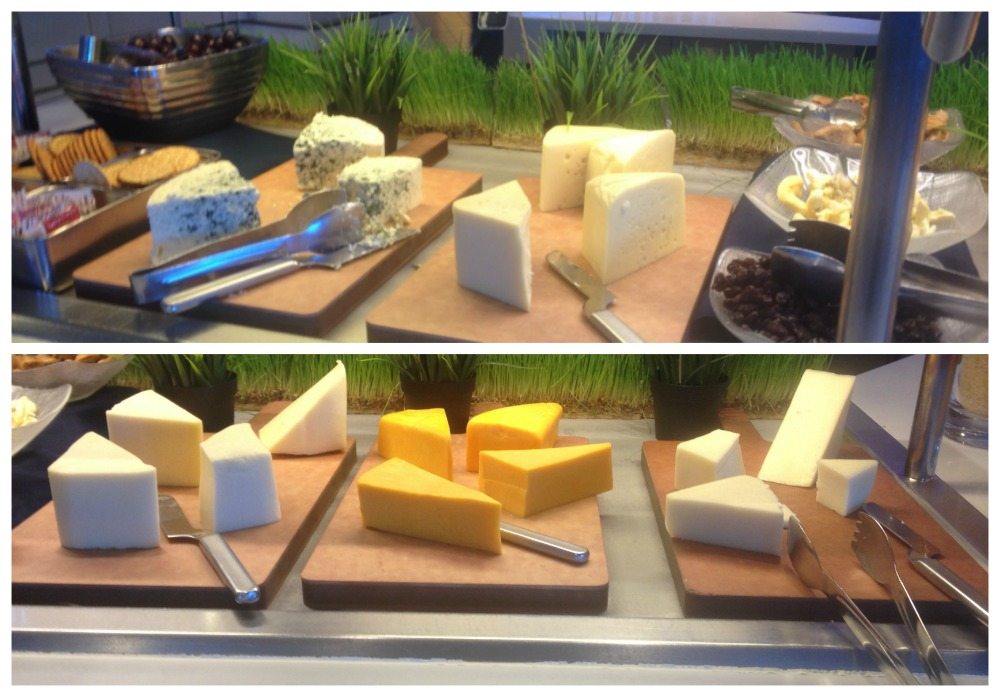 Time to relax and get some sun

When it comes to crossing the Atlantic the weather can be hit n miss, sometimes you could be fortunate and have calm seas with many sunny days, others it could be rather overcast with and rough seas, knowing that I wasn’t going to wait another day before spending some time on the lawn, before heading to the pool.

Relaxing on the grass, deck 15 the Lawn Club Celebrity Eclipse

The pools were not too busy and welcoming warm. I enjoyed my time splashing around while Moni got into her book. 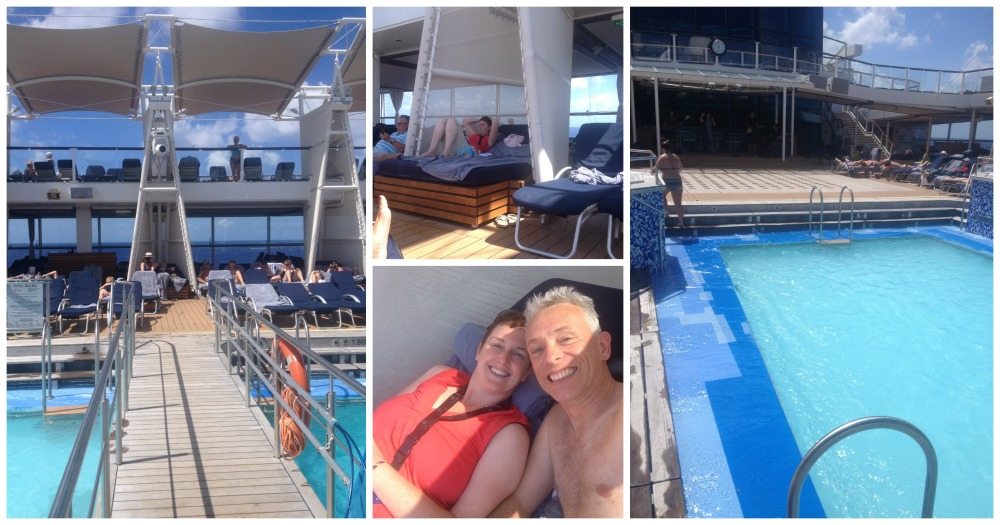 Pool life on the Celebrity Eclipse

The Merseyside derby was on today and I hoped it would be shown on the TV, as you can see, I was able to enjoy it watching from the bed in our cabin. 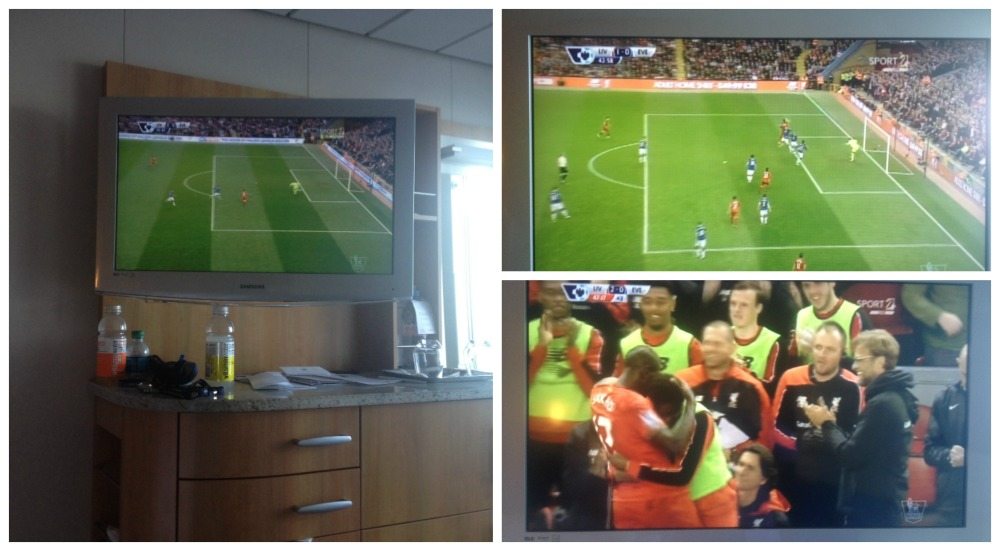 Watching my team on TV in the cabin

After the game it was time to go for dinner. It must seem like all we do is eat onboard cruise ships, but that’s not true, we sleep as well. This was the view from the balcony at 6pm before dinner.

Afternoon view from the balcony somewhere in the Atlantic 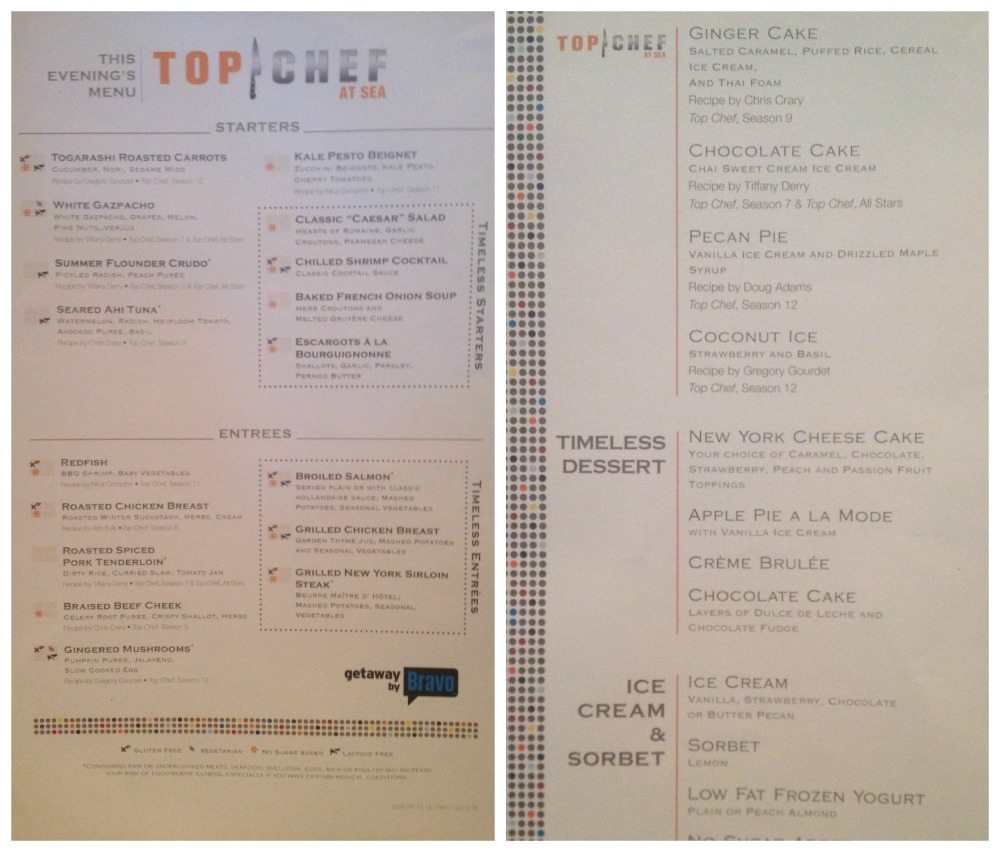 My first choice was the Flounder (top left) which was rather salty which I couldn’t manage to eat more than two mouthfuls. The other starters were good. 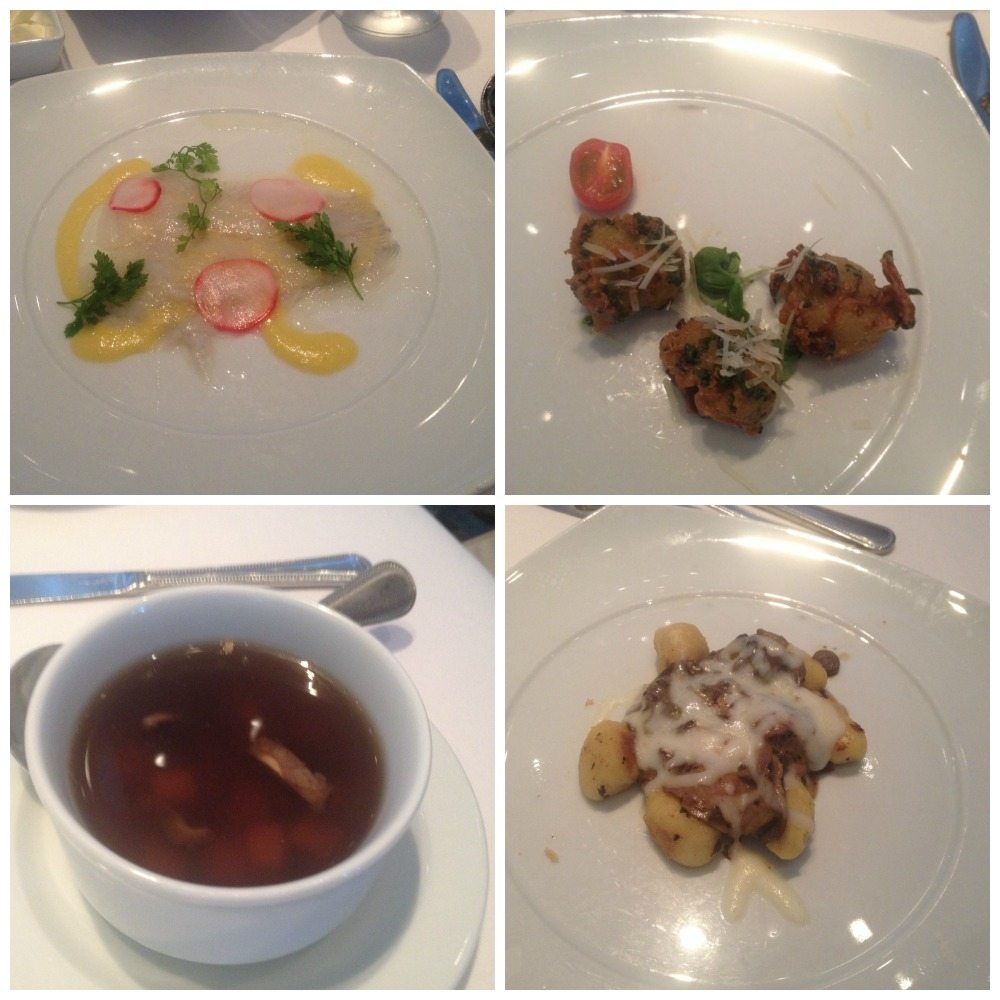 Selection of starters from the Top Chef menu 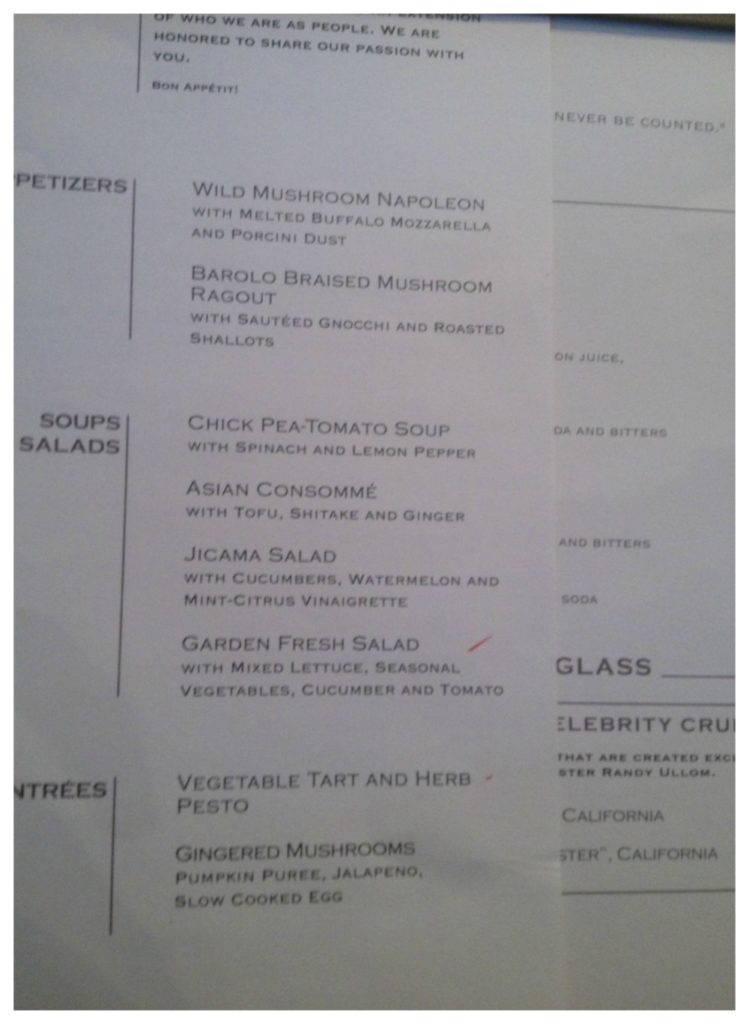 These were our two main meals, Vegetable Tart & Herb Pesto for Moni while I had the Braised Beef Cheek. Both were very nice indeed. 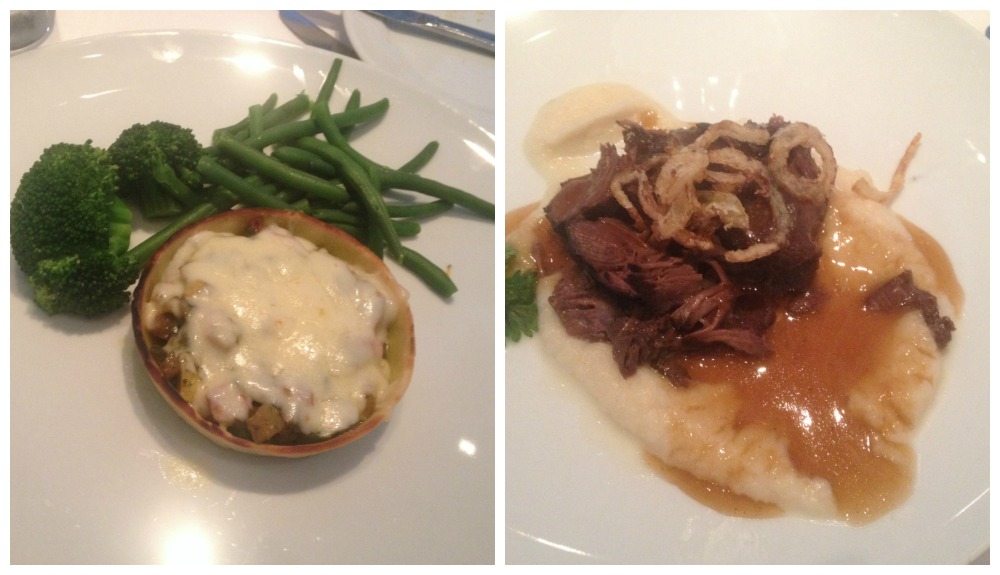 Chocolate Cake and Ginger Cake were our dessert choices, both quite nice.

Desserts from the Top Chef menu on Celebrity Eclipse

We didn’t fancy the show tonight and found ourselves checking out the movie screening in Celebrity Central. The movie was ‘SPY’ and was part comedy part action. We followed our evening at the movies with a coffee and cake at the cafe before calling it a day. 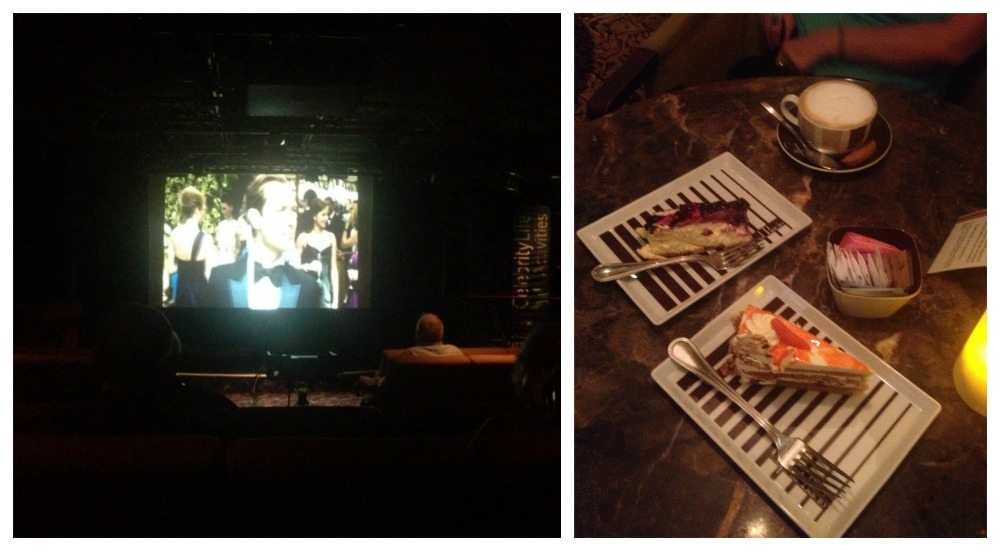 Thanks for reading days 3 & 4, if you haven’t been with us from day 1 you might want to go check out the begining of this Celebrity Eclipse cruise review and catch up.

As always, tell us what you think in the comments below.