After a great day in Tokyo visiting the planetarium in the Sunshine City building with views over the city and some fortunate shopping for the both of us we decided to head to our accommodation for the night. Tonight we had no booking as apparently you can’t reserve spaces. We were looking for a Manga Cafe, this one was the Com Com Manga Cafe.

As per normal we seem to be going around in circles, even Google was giving us the run around, oh well. Down another wrong lane we stop ask and two young lads for help. They thought about it for a second and discussed it between them trying to figure out where it could be, and after a while the iPhone was telling them which way to go.

Even so we were following the little red dot on the map, it was still a little confusing, suddenly they say “it’s down there on the left” in excitement, I think they were just as happy to find it as we were. We thanked them greatly and made our way to the Manga cafe.

From the outside it looks nothing like a place to stay, but the big banner said Manga and had pictures of the Manga comics on it so in we went. There is a small lift or some stairs, we took the stairs and find the entrance on the second floor.

Manga cafe from outside, nothing much to see

“Prices and how it works in a Manga Cafe”

The place was tiny and you enter directly at the front desk if you can call it that. We asked about booking a place to stay for the night until 3am. You can book a space in …hourly blocks… We wanted a space for us together and paid a deposit with the lady who spoke hardly a word in english. Lucky there is an explanation in English. 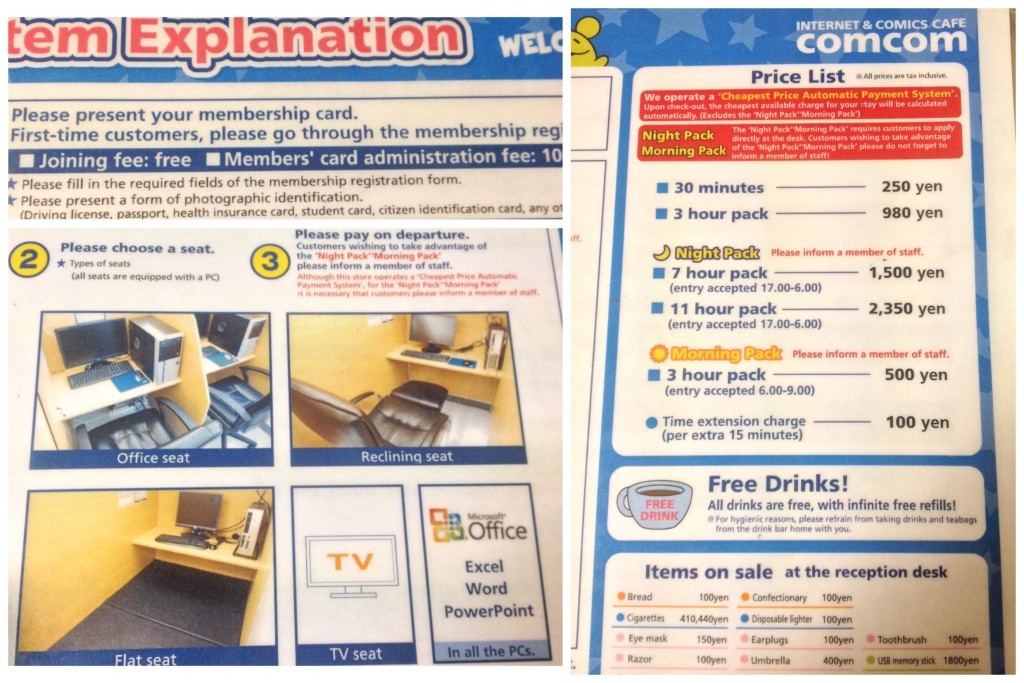 Prices and how it works in a Manga Cafe

We then left to go have dinner, we walked back to the corner of the road and found a curry place which was really very good and cheap, a few locals were eating and according to the menu the establishment had been here for many years, since 1951 confirmed by taking a photo of the outside. 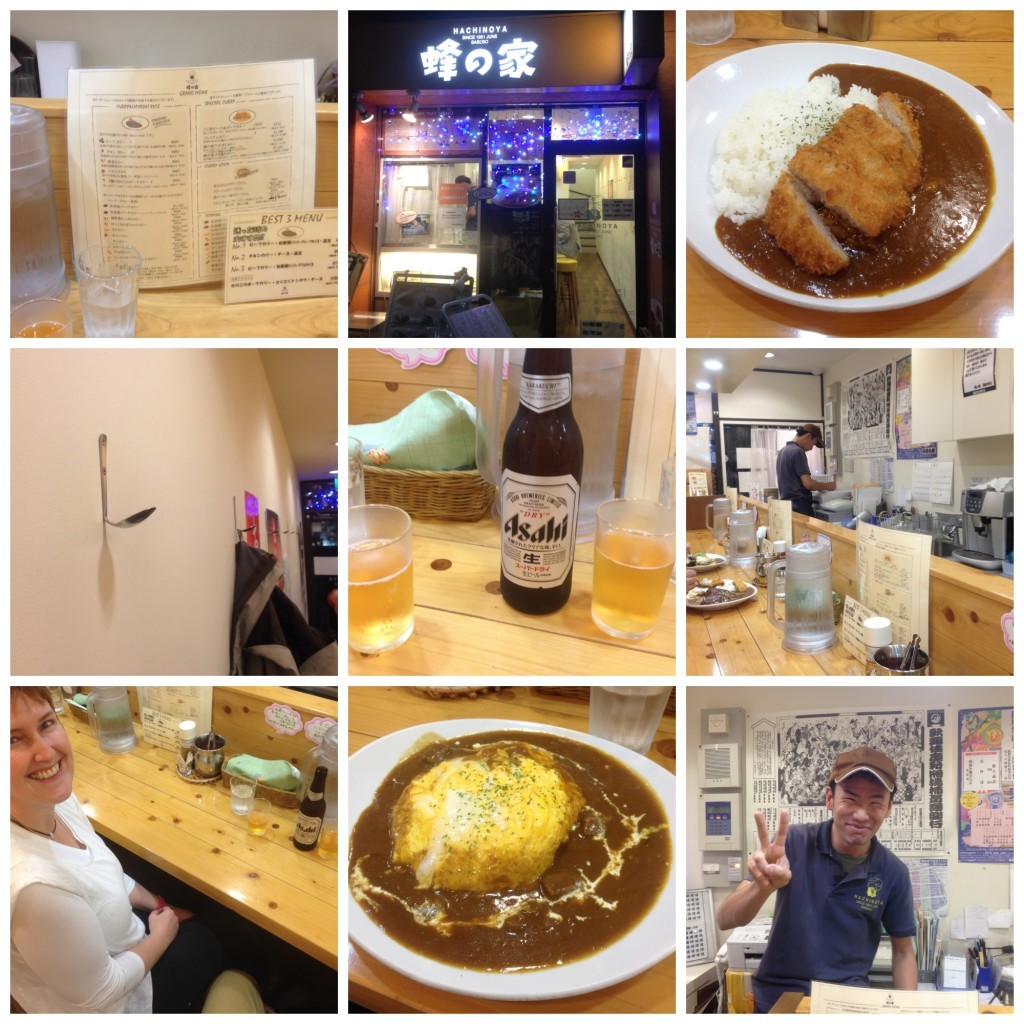 Dinner in this place was great and cheap

“After dinner we officially checked into the Com Com Manga Cafe”

This time we took the old lift, it made it…

On seeing the cubicle we realised that we both had no chance of staying in it together and so I booked another with the lady to allow us more space.

Desks and cubicles at Manga Cafe, are only as wide as the door

“The biggest negative is that it was very smokey”

The place was not overly busy but did have a few users. The biggest negative is that it was very smokey. The non smoking end was occupied and also had none of the biggest cubicles so we had to take the smoking area, boy I could hardly breathe. And to think we had this place booked for 7 hours before the fish market opens.

So I made us some coffee and had a quick look around. Many isles of manga where here if you wanted to read them, thousands and thousands of them all neatly in rows. 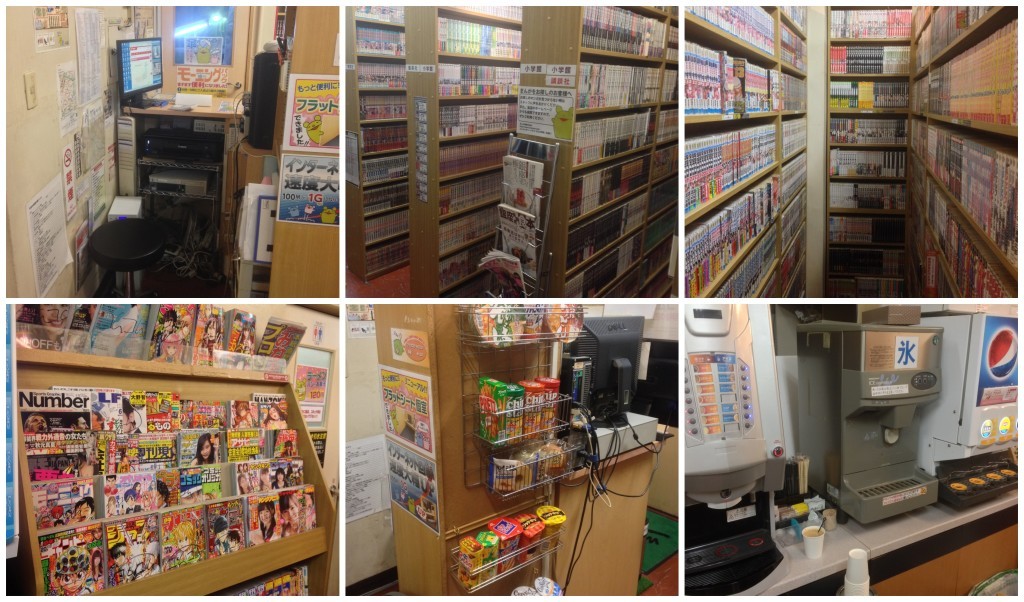 Reception, beverages & snacks and lots of manga at Manga

“Boy was I pissed off”

I was online checking up re the fish market making sure that I knew the way and what entrance to use to get there, when I noticed that it had a closed sign for tomorrow… I double checked and yes it was closed, boy was I pissed off… I’d spent so much time researching this and for me to not see this until now… argh

Manga, small and smokey, Moni all smiles until I break the news

How could I have messed up? What happened was I’d seen the dates on an old calendar, not sure why it still loads the old one, but it did… warning to others be very careful when checking for dates to the Tokyo Fish Market that the calendar is up to date and double check it.

“Note to others, if you don’t smoke and hate it as much as we do then don’t stay here”

If you are a smoker, I’m sure you’ll feel just at home.

We gathered our stuff and checked out, to the strange look on the face of the lady, who had no idea what was going on. We then made our way to the subway and back to stay the night at a capsule hotel, which I’d booked quickly online just before leaving the Com Com Manga Cafe, out we stepped into fresh air.

To say that I was angrily upset would be a an understatement, but I had only myself to blame and so I had to get over myself, a good nights sleep would help. The subway took us a few stops, where we changed lines and soon we are at the Capsule hotel from yesterday. First up was a shower and bath, the rest can wait till morning.

What to Expect When Staying in a Capsule Hotel in ...