Breakfast at 8.15 today alone on our own table for two, with overcast skies. Today is the first of five sea days crossing the Atlantic Ocean. 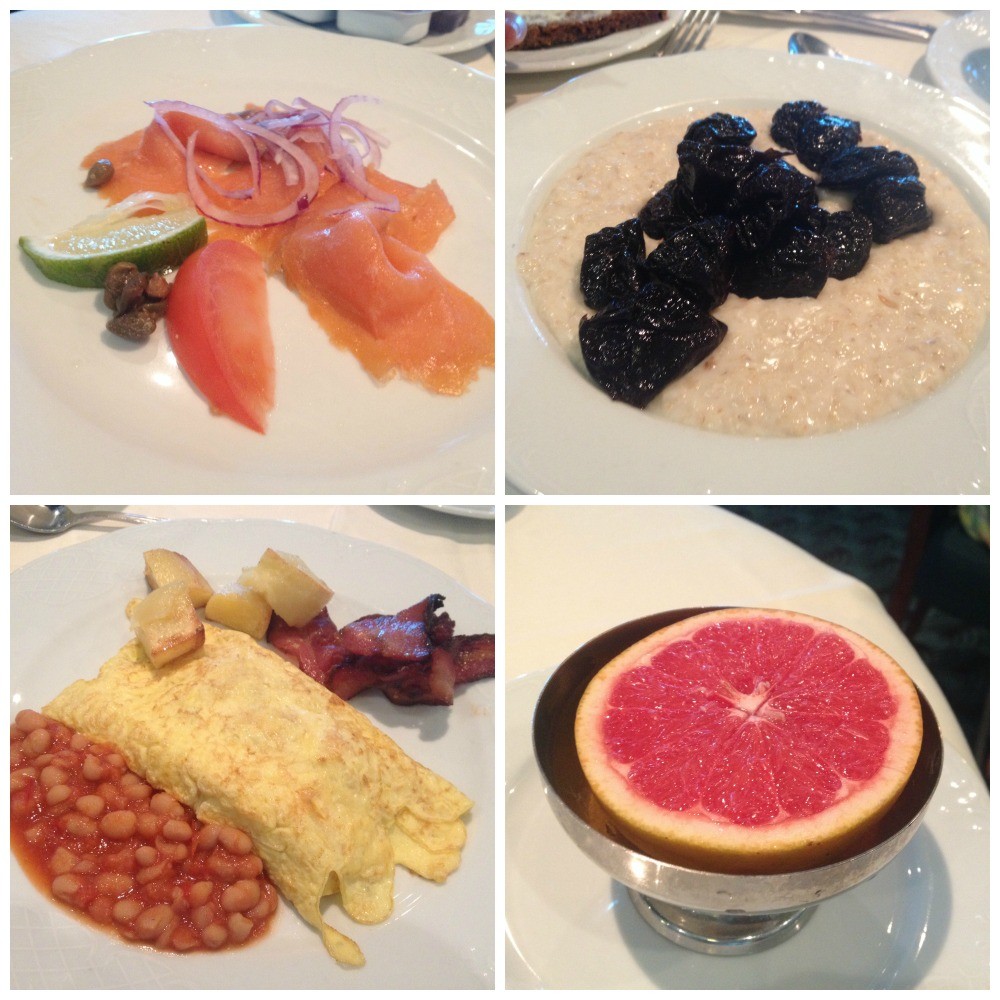 MSC coffee the best at sea

We had a very good coffee again, which is most enjoyable. MSC have definitely got the gold star award for the best coffee at sea so far. Maybe we have just timed it right the past few days, but it has been constantly good at this time around 10.30am. We’ll see how it is at a later time and report back. 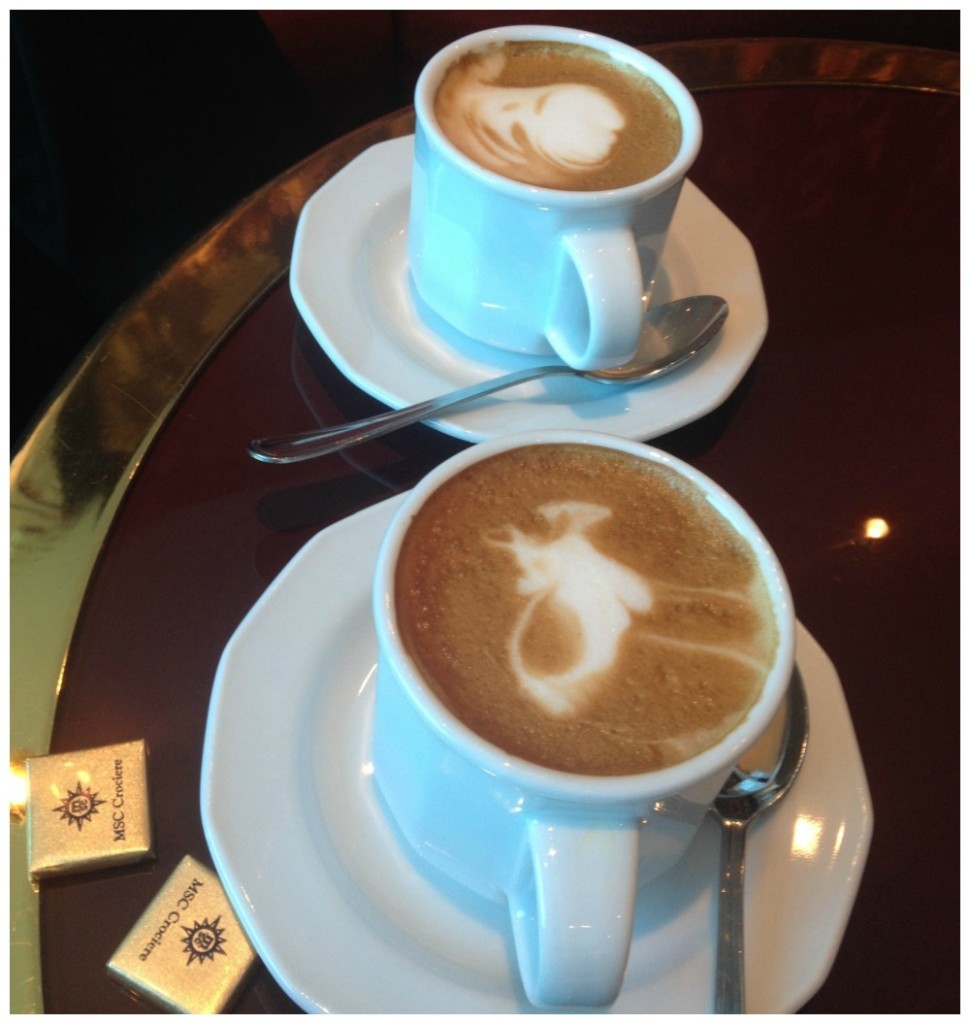 After working for a while in the cafe we then made our way to the cabin where Moni continued her writing. I read my book before heading out to get some cups of tea from the buffet. While I was there I had a bowl of pasta for lunch, Moni didn’t want any lunch. Back at the cabin we drank our teas and had a small cake each, before I went and joined the team New Zealand in the world champions quiz.

This quiz will run over the next 5 sea days and groups of ten (max) have to register and then answer the questions. There are about 20 teams each named a different country the one I’m on just happened to be NZ. At first it was not very organised but eventually it got going. The questions for today were displayed on the theatre screen in six languages and then the question is also read out in each language, before a multiple choice answer is shown and then you chose your answer.

At the end the sheets are collected, marked and the scores announced. We got 10/10 on the first day, now to keep it up.

Back in the cabin after 5pm with Moni just finishing up her project, which made her happy and so we relaxed on the balcony for an hour or two.

Tonight was the second Gala night

We suited up and stopped by the purple bar for a drink before dinner. 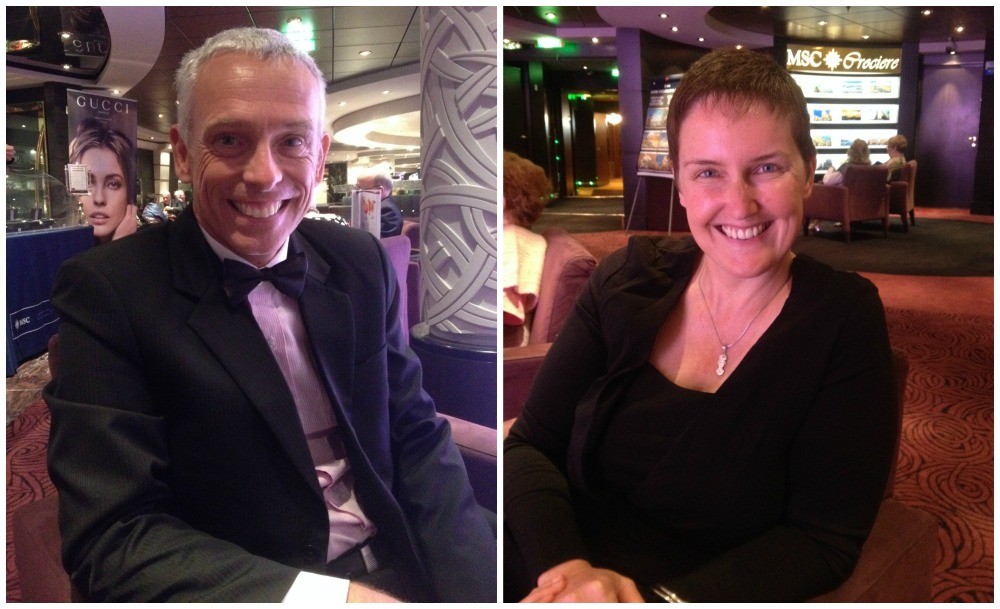 Dressed up for Gala night on MSC Magnifica

Yay… we had dinner guests

Just as our appetizers had been served, Peter and Pat walked in and asked if they could join us, naturally we were very happy to have them join us. They have second sitting which begins at 10pm which they don’t mind, but they are also are alone. We had a fun evening and talked the whole time. Cruise stories etc, Black member on MSC, being mugged etc. it was a fantastic evening. 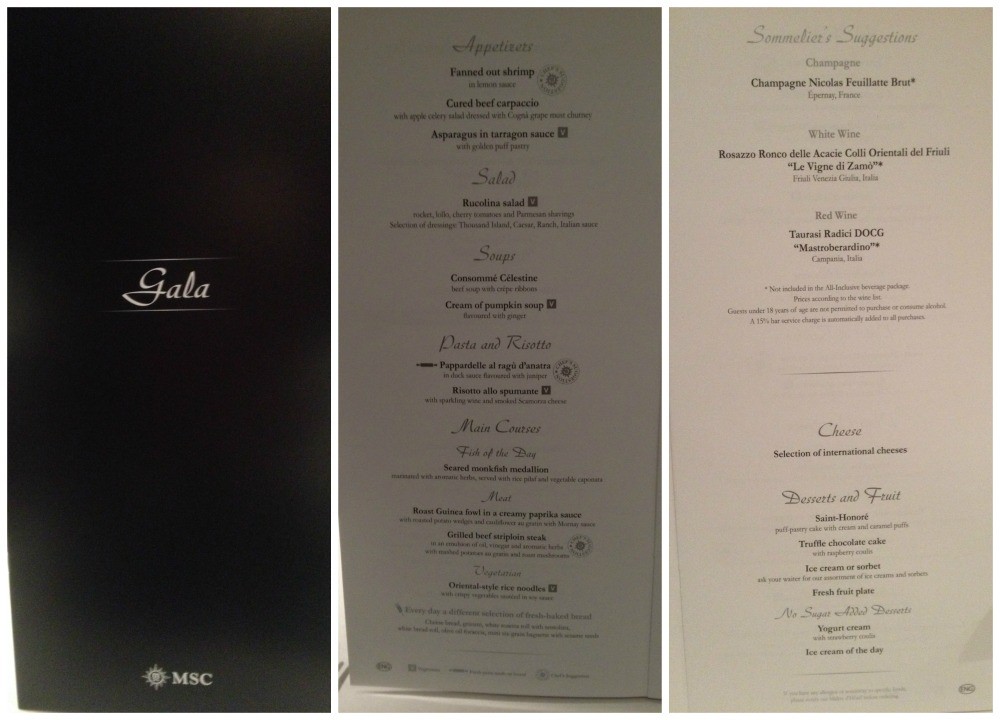 Not sure why but I didn’t take a photo of us all, can you believe that?

Dinner was nice but it was a lot slower than normal and we were leaving at 9.50pm which didn’t leave Marlon and the guys much time to get ready for the next sitting, as we walked away I turned back to see his colleagues all pitch in and get things done though.

Cured beef carpaccio – with apple celery salad dressed with Cogna grape must chutney (J) This was just ok, not so sure about the small pastry shell with next to nothing in. Really lacked the punch.

Risotto allo spumant – with sparkling wine and smoked Scamrza cheese (M) The risotto is very consistent on board, a bit stodgy and always a huge serving, yet full of flavour.

Pappardelle al ragu d’anatra – in duck sauce flavoured with juniper (J) The pasta as always so far has been excellent. The flavour in this dish was subtle and not to big a portion.

Seared monkfish medallion – marinated with aromatic herbs, served with rice pilaf and vegetable caponata (J) I hadn’t had Monkfish for years and was looking forward. It was dry and very bland, not even the caponata could help.

Saint-Honoré – puff-pastry cake with cream and caramel puffs (J) This is my most favourite of classic desserts (especially the one I remember in Switzerland) unfortunately this didn’t hit the mark. 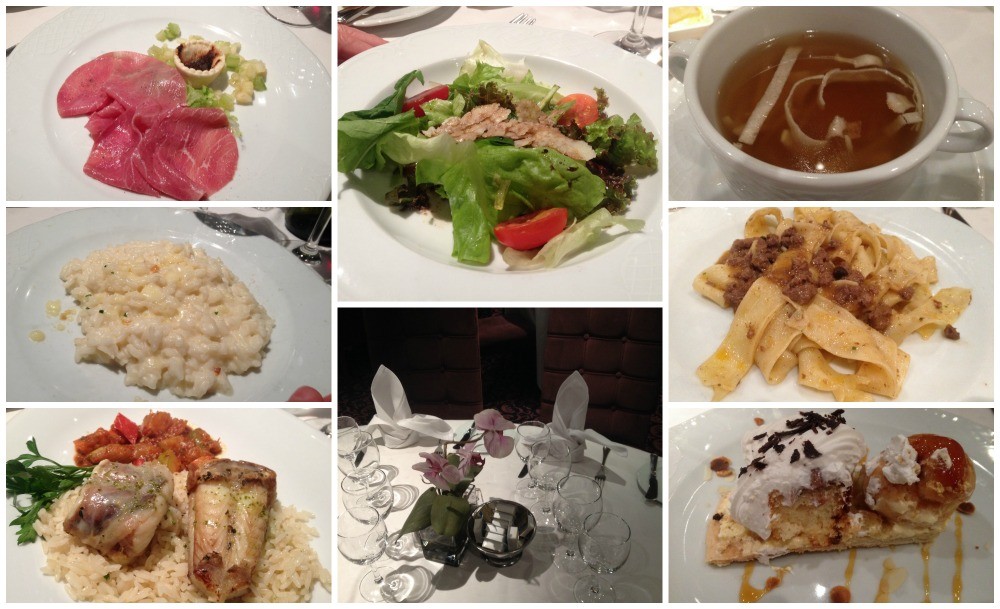 After saying good night to Pat & Peter we wandered into the theatre and sat towards the back. The show was called ‘Pasión Latina’ and was a classical concert which consisted of a tenor, a baritone, a violinist and pianist who sung and played a few songs, all very classical. Apparently this is the first of five shows that they will do. It was a pretty good performance with the violinist being the stand out for us.

Of to bed and putting the clocks forward an hour tonight.

Some Of The Best Days Are Sea Days
Boarding MSC Magnifica in Buenos Aires – 21 ...
A Visit to Manta & Montecristi in Ecuador