Today we are in Juneau the capital of Alaska and we will take a tour from one of the private operators at the dock.

We finally docked at 8.23am in Juneau, after traveling 313 nautical miles. Between Ketchikan to Juneau, the capital city of Alaska, we traveled at an average speed of 20.1 knots.

Again we have no tours pre booked and after a healthy breakfast we make our way ashore.

The first thing we notice is plenty of booths advertising tours. Each one very similar, all battling for the tourist dollar. We haggle with a few and finally settle on one that will take us to the Mendenhall Glacier and then out whale spotting for $85 each plus tax.

They are forever adding tax after the price, totally not allowed back in Australia where it is so clear what the final price is.

A tour to Mendenhall Glacier in Juneau Alaska

The drive out to the Mendenhall Glacier in the Tongass National Forest is on a bus which takes about 25 minutes.

We get off the bus with the Mendenhall Glacier in full view. There are not many people around so we head on over to the Glacier and take some photos, all the time keeping an eye out for Black Bears. We are a little concerned as one was spotted just a few days ago according to the driver.

We walk around part of the ‘rainforest walk’ to a Nugget Falls and get up close to feel the icy cold spray. We could see a few icebergs floating slowly around on Mendenhall Lake.

Having just over an hour here before our bus picked us up to go out whale spotting. During that hour, hundreds of people have descended on the Glacier and visitor centre, we were glad we came early. 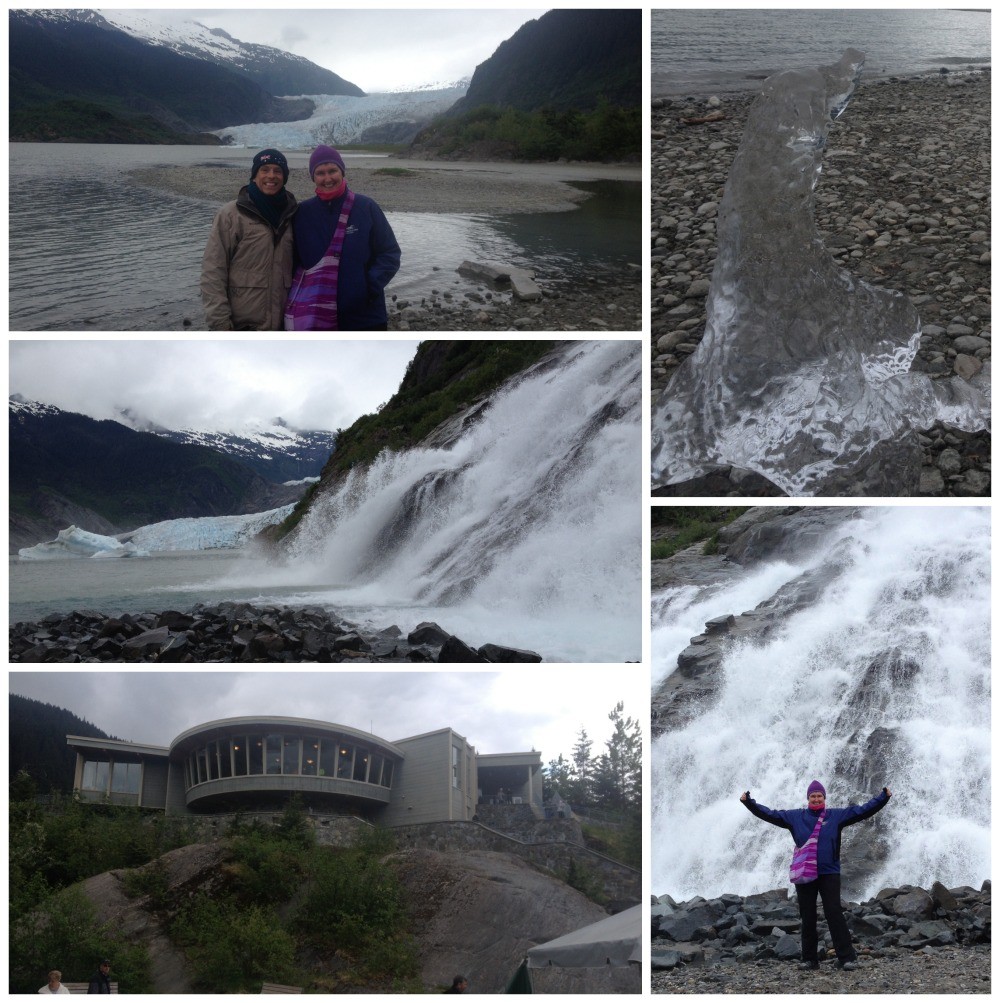 The bus takes us to Auke Bay where we board a small vessel with only 14 passengers for a two-hour tour. The boat leaves and quickly we are racing across the bay to our first whale spotting, then quickly to the next. 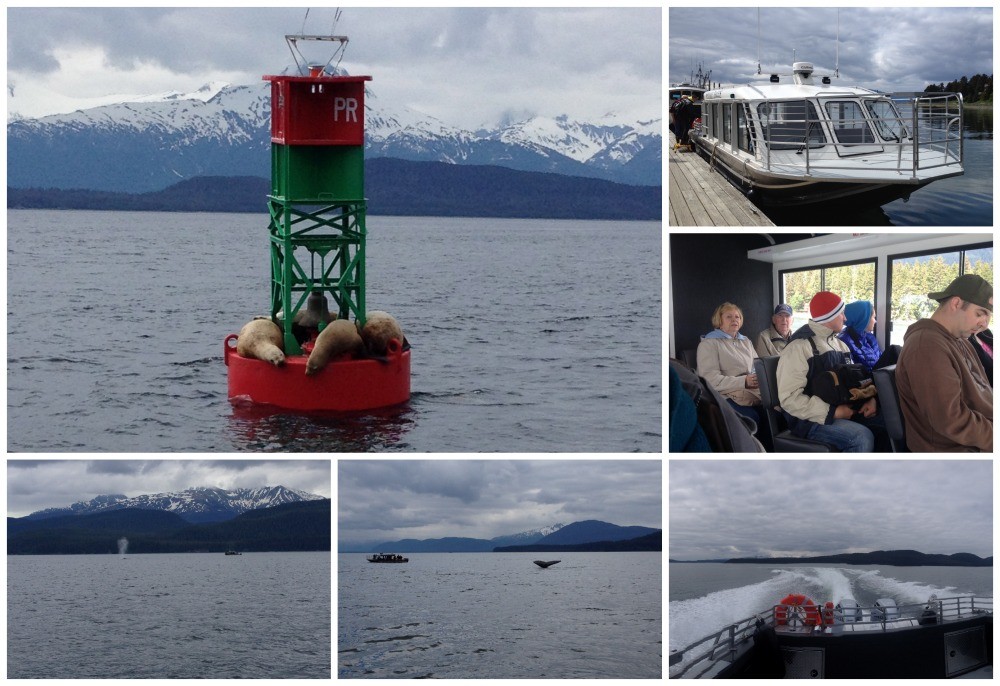 Next we make our way to see some seals that happen to be lying on a marker buoy, then we turn and head back to see if we can see more whales, which we do, this time we are closer, but not that close.

The whales seem very sparse right now and our best entertainment was from a young marine student who gave us some commentary at the beginning and that was that. We did see Humpback Whales, Seals and Sea Otters before making our way back, to arrive exactly after two hours, nothing more nothing less and that to me summed up the tour.

I suppose we have been spoilt many times in Queensland Australia having experienced the Humpback Whales up close on a several trips.

The bus then brought us back to the ship where we then went and ate lunch.

Walking around the town of Juneau

After that we went ashore again and took a look around town in and out of souvenir shops before the cold finally got to us and we boarded the ship.

Unfortunately today was mostly overcast and so the photos don’t look that exciting. We had to try some of the famous Kettle Corn, which is puffed corn, like pop corn, which you can sample in a couple of flavours, you can smell the sweet aromas all around town.

A walk past the Alaskan Hotel from 1936 and towards the waterfront where a statue of a dog called Patsy Ann and her story are told. She was a dog that roamed free in Juneau, and apparently was the first to know when a ship was coming in, then she would also great them at the pier.

Back in our cabin, we find a gift. A bottle of wine from our awesome agent, Pam from Avoya, whom we booked the cruise with.

A gift from our awesome agent Pam from Avoya

Moni took a hot bath in the tub to warm up. I ordered room service for this evenings dinner and we stayed in the cabin. Room service was not bad, we both had salmon for main and I had french onion soup to start while Moni opted for dessert. The room service menu is rather small and really could do with more selections.

At 9.35pm we pushed away from Juneau and made our way to Skagway. 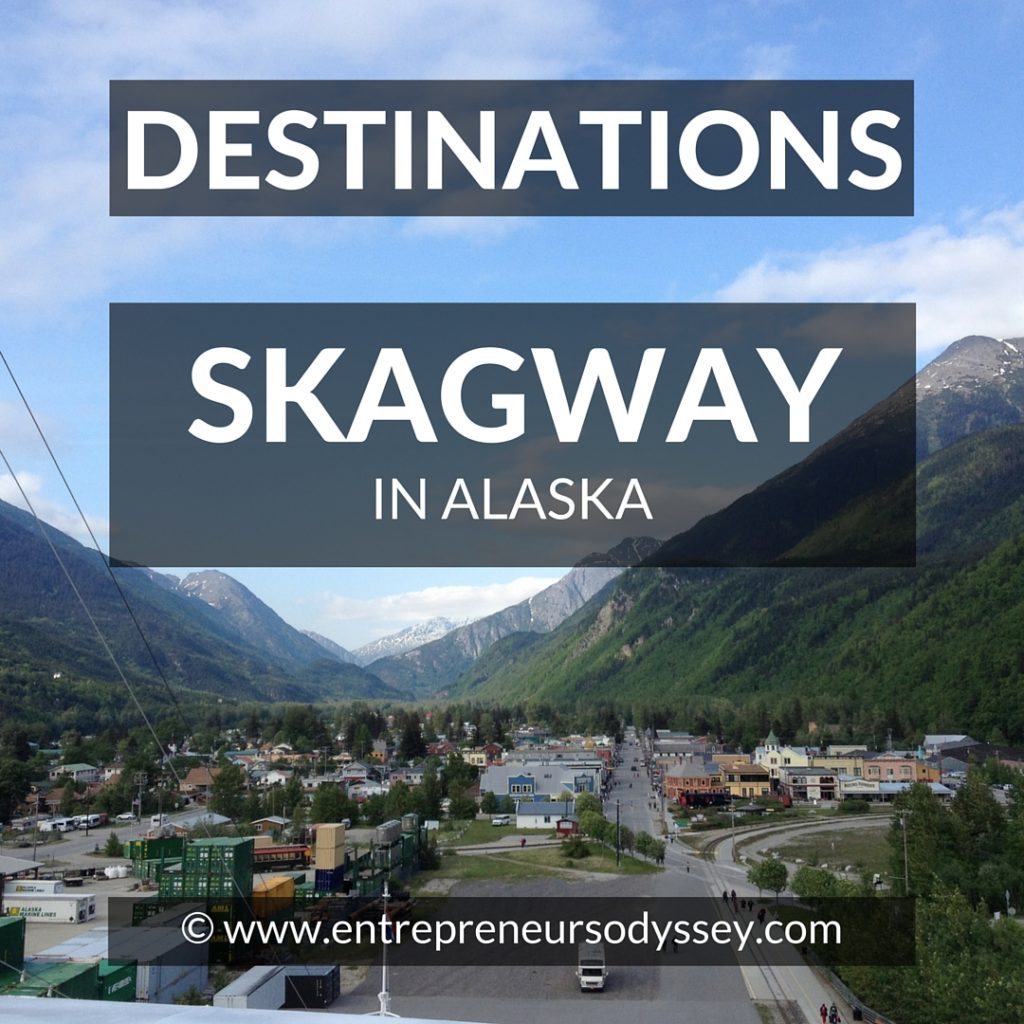