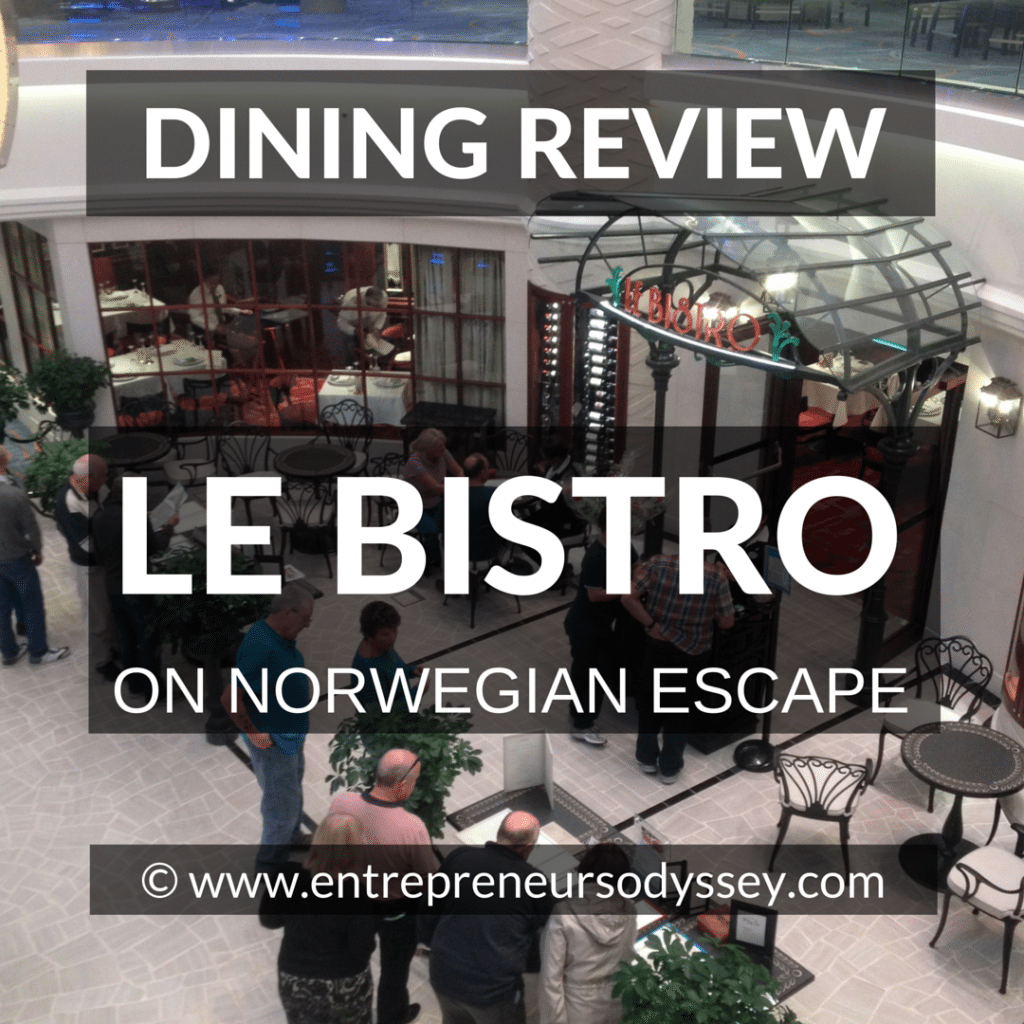 Most cruise ships have at least one fine dining speciality venue onboard, Le Bistro on Norwegian Escape is the French style fine dining restaurant, read on to see how fine it really is in our review of Le Bistro.

How much does Le Bistro cost?

The meals in Le Bistro are a la carte priced and our three course dinner would have cost $60.94 plus 18% service charge. Having a dining package would be a good idea if you considered any of the speciality venues on board. 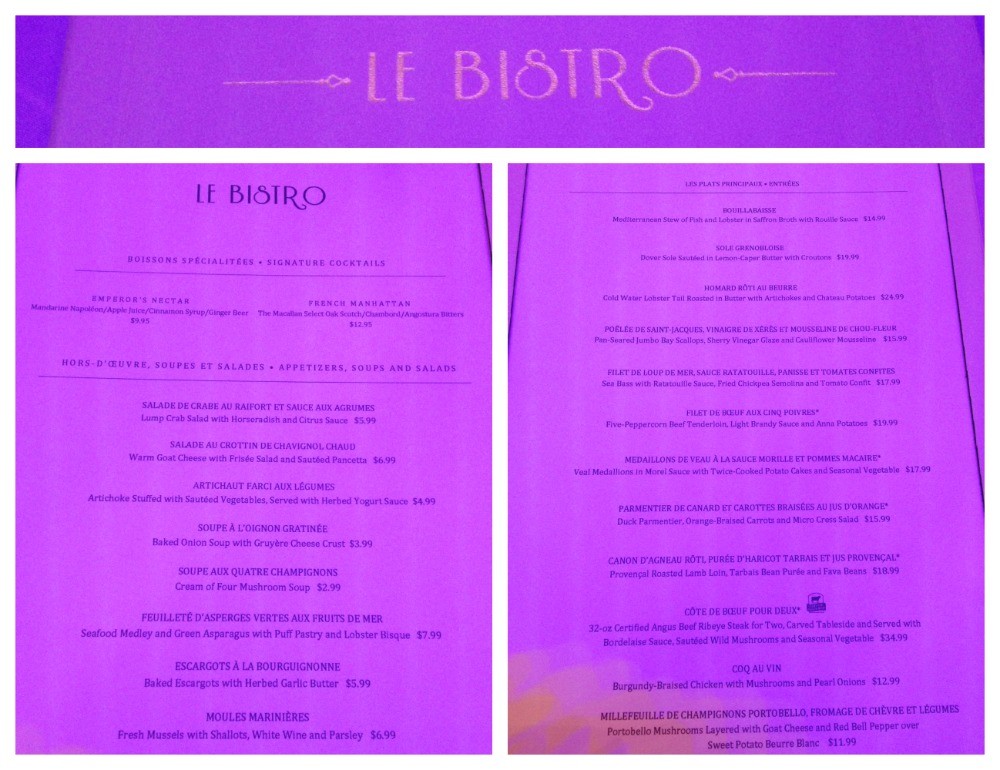 Menu from the French Restaurant Le Bistro on NCL Escape

This restaurant on Escape is right at the center of the ship where a lot of foot traffic passes by. You can chose to sit inside the restaurant or on the outside of the venue, a bit like street side dining a posed to waterfront dining.

Our reservation was for 9pm and after the hostess had taken other guests to their tables she greeted us and showed us to our table. We were seated at a table right near the doorway, a very busy place and not romantic at all.

We asked to move to another table. We were told to wait outside while they got one ready. In the meantime other people turned up for their reservations and were taken to their tables. Eventually we had a table in the far corner inside, we couldn’t get further away from the entrance if we tried.

The Bistro was very busy this night, like every night during this cruise. The restaurant is actually very small inside with hardly any room between tables, a shame really as this would be one of the venues that you’d expect to be romantic and less hectic than others.

To begin, we had the Seafood medley with asparagus, lobster sauce and puff pastry case, which you see in the left picture. The seafood flavours were good but the pastry tasted like it was a few days old.

The other picture is of Warm goats cheese, frisse salad and crisp pancetta. Well what can I say? Nothing much really apart from what looks like, a bowl with some salad thrown in where you can play hide n seek for the pancetta, with two pieces of toasted goat cheese on baguette. The only saving point here was the flavour of the warm cheese.

Above we have pictures of our main meals, on the left is Dover sole sautéed in lemon caper butter with croutons. The fish was pretty good, nice flavour and cooked fine, just lacked some colour of vegetables.

The other plate is Veal medallions in Morel sauce with twice cooked potato cakes and seasonal vegetables. Presentation here was much better and the flavours nice, even though not much Morel sauce. The meal was just a little on the cool side.

This dish was brought to the table covered by a shiny cloche which the waiter removed. Lots of meals this evening were served like that which really is the wow factor from the service side of things. 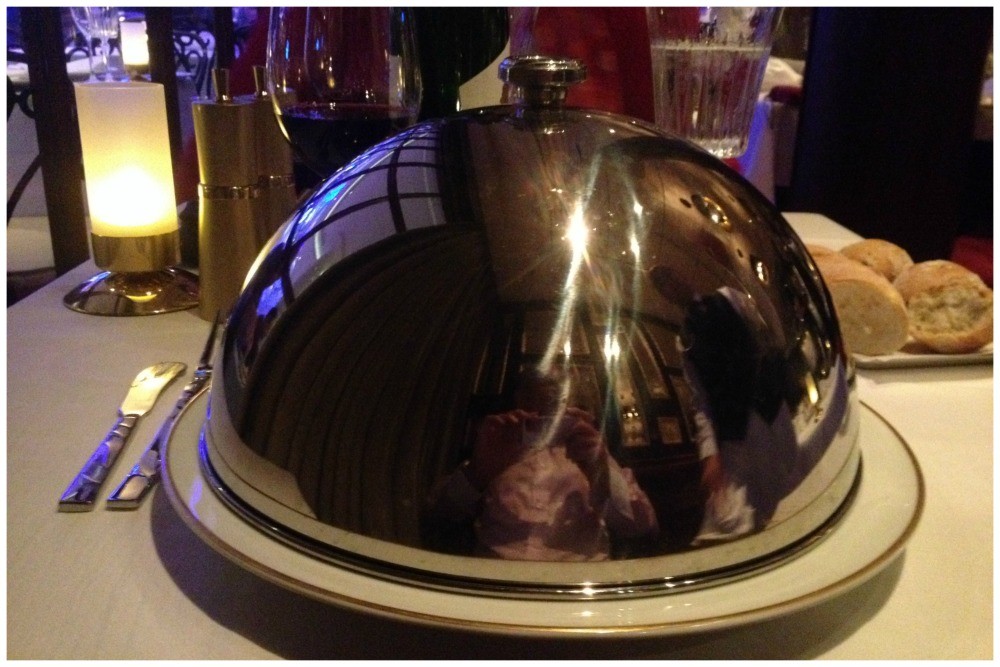 I did see a couple that had ordered the beef ribeye for two, carved at the table, however the beef was only shown to them and then cut in the kitchen. The guests sat with plates of vegetables in front of them for what seemed an eternity before the meat returned, in fact they had started to eat the vegetables probably wondering what they should do next.

Back to our table, no one came to ask if everything was fine, the waiter didn’t even top up our water and I poured the wine. The restaurant was very full tonight.

The dessert menu in Le Bistro 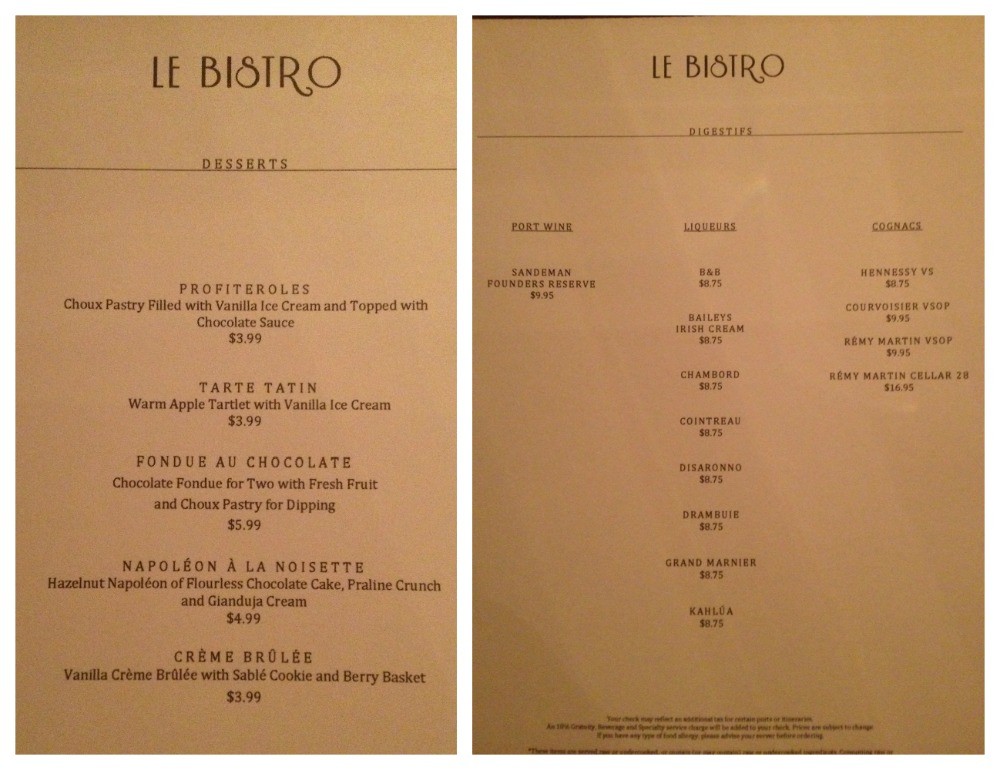 Deserts are often the highlight of many a restaurant and on reading the desert menu I was pleased to see some classics there. The test would be in how well they managed them.

The Vanilla Creme brulée with sablé cookie and berry basket which you see in the left picture was perfect, thin crisp sugar crust and smooth inside, the mini berry basket was a bit of a let down.

As for the Tart Tartin with vanilla ice cream on the right, what a disappointment. The huge pile of sliced apple, was just that a pile of sliced cooked apple. The tart part was barely there and any caramelized sugar was non-existent. The Vanilla ice cream was nice. Maybe the caramel sugar stick on the ice cream was ment to replace that from the apple – it didn’t work. Can you spot the gold leaf? Why is it there, I don’t know.

The menu is classic french with dishes like Baked Onion Soup, Snails Bourguignonne, Bouillabaisse and Lobster. The meals that we chose were lacking in any wow factor and actually rather poor in presentation and quality for a speciality French style restaurant.

Service was also not what you’d expect in a fine dining venue, I will say that it was due to how busy the place was. This is something that the staff are going to need to discuss to make it a better restaurant worthy of it being the fine dining French restaurant on the magnificent Norwegian Escape.

Unfortunately Le Bistro did not live up to our expectations and without having a dining package I certainly wouldn’t pay extra. Hopefully the Le Bistro team will get a grip of the situation and make the venue a must go experience in the future. The fine dining experience is something that many cruise passengers really look forward to as a special evening out to dress up and wine & dine in style. Keeping the fingers crossed on this one.

Have you dined at Le Bistro on any of the Norwegian ships? What do you expect from the fine dining venues onboard? Maybe you prefer to stay away from the more dressy restaurants. What ever your desires are, we’d love to know your thoughts in the comments below.

Before you go, you might like to check out our dining review of Moderno, the Brazilian Churrascaria restaurant on Norwegian Escape. 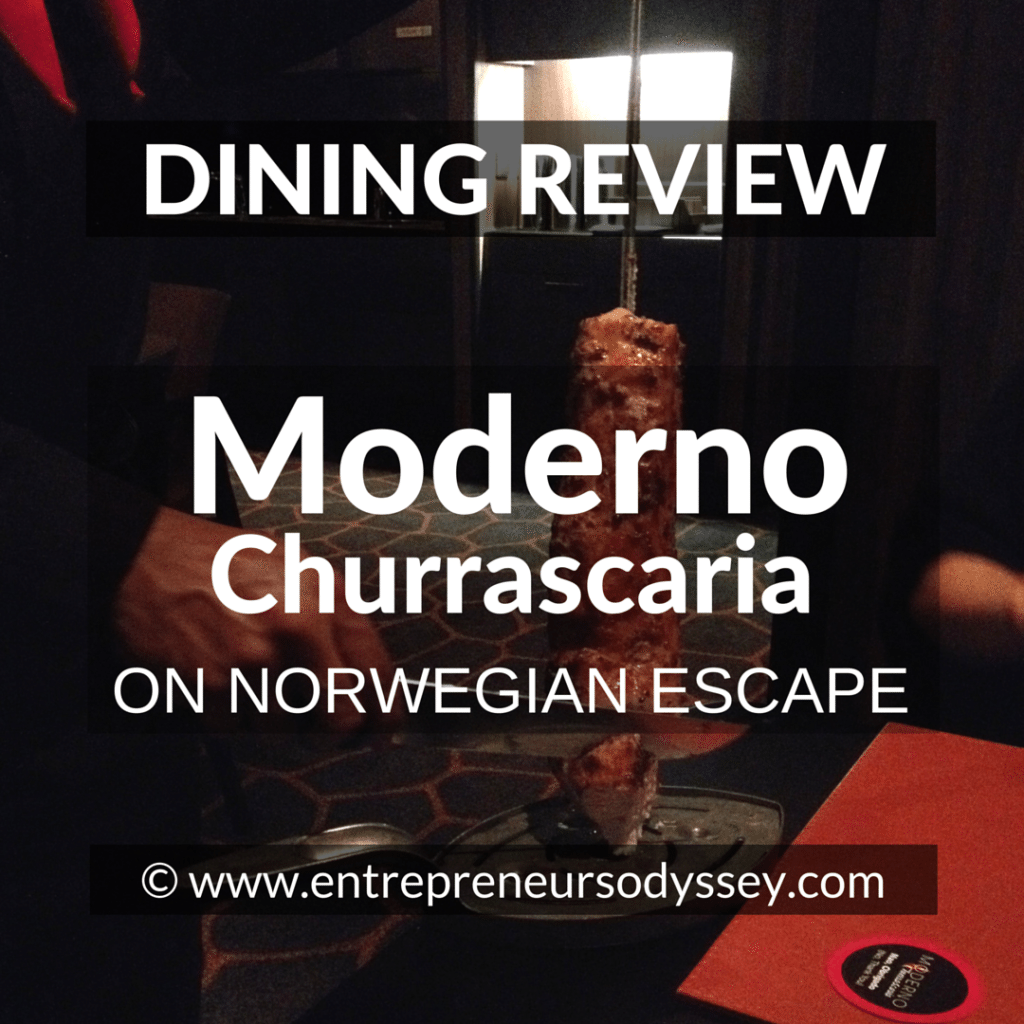