Moni & I were staying in Formia for nearly three months over winter 2016/17. Gaeta is the town closest to Formia and the train station often comes up in a search as Formia-Gaeta.

That confused me at first when I was trying to book my train tickets online.

How to get to Gaeta from Formia

We also were confused when trying to find out how to get to Gaeta from Formia. We asked around a few locals on where to catch the bus to Gaeta and most of them had no idea.

Eventually we found out where to catch the bus to Gaeta in Formia.

Formia is a coastal town and is stretched along a strip of coastline and Gaeta is at one end of this area roughly a hour north of Naples.

To me, Formia is a town that is split in two, uptown & downtown. One end has more shops, the train station, the port, the theatre etc while the other end has more residential and beachfront. I might be totally wrong with my thoughts but it’s how I perceive it to be.

The bus to Gaeta leaves from the uptown end

You can get a bus from the train station (apparently) yet we never did this option. We caught the bus from the main stop in town.

Make sure you buy your tickets for the journey before getting on the bus. The drivers do not sell tickets.

We bought our tickets from a kiosk or small cafe / newsagent place directly next to the bus stop. Not that easy to find without asking someone.

A single journey costs €1.10 and you can buy multiple tickets.

The trip to Gaeta is about 25 minutes. You could walk it if you really wanted to, not sure why we didn’t come to think of it.

Actually, the edge of Gaeta to Formia is just after beginning the bus trip. You drive almost all the way in the area known as Gaeta. Eventually you will pass by Gaeta yacht harbour and club, before reaching the end stop. 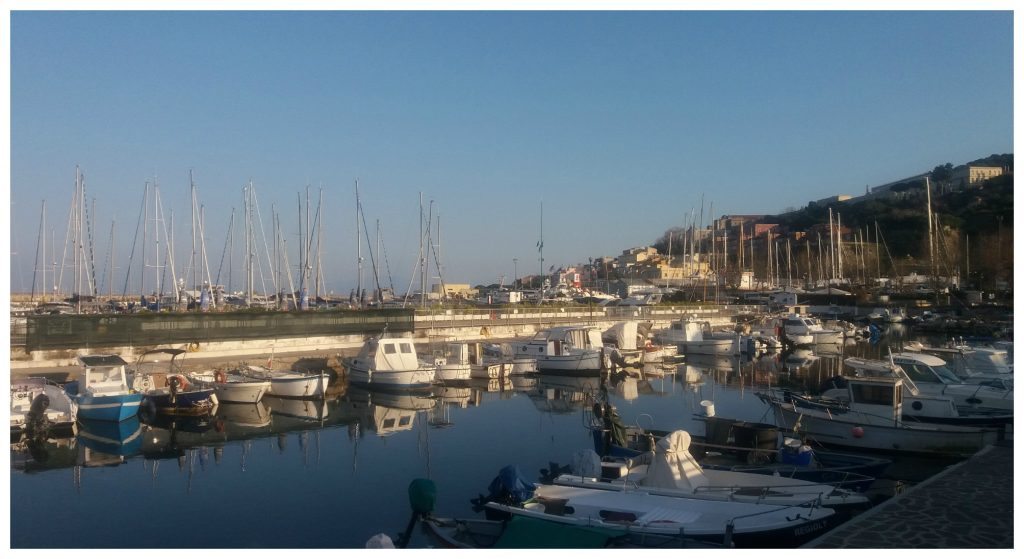 The yacht harbour in Gaeta 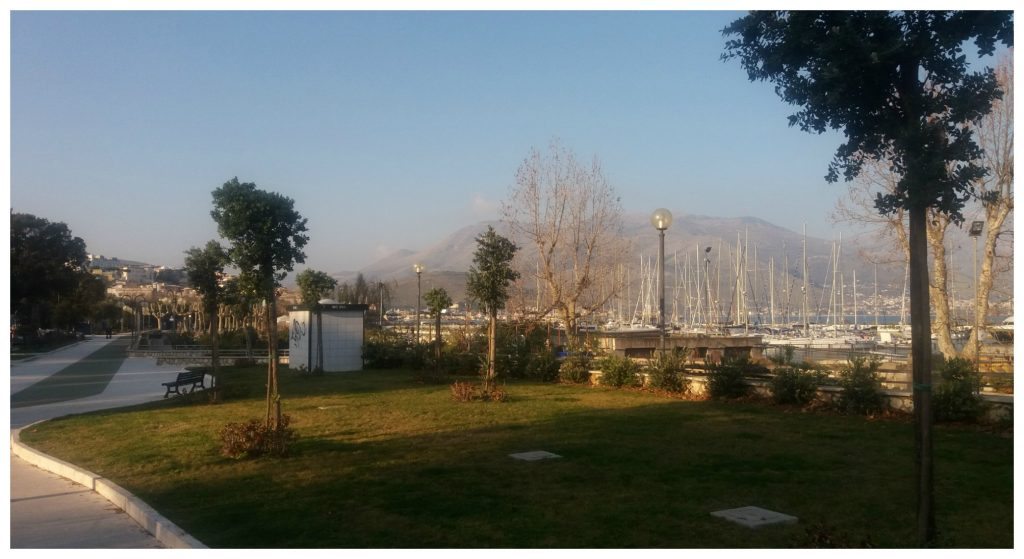 We walked along here on our second visit to Gaeta, but I am adding these photos to this one blog post about Gaeta. 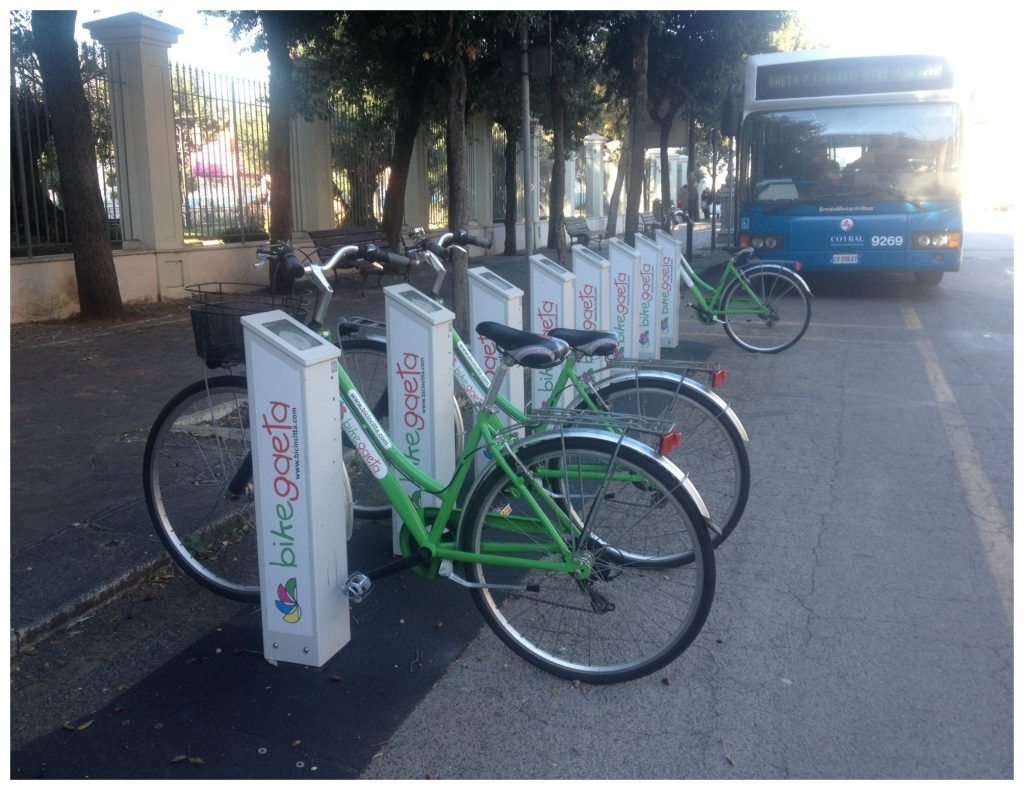 Bus stop and bikes for hire in Gaeta

That picture above is at the end stop in Gaeta after going in and around part of the town. Here you can also rent a bike.

What’s to see in Gaeta?

Just around the corner from the last bus stop you have this view of town. 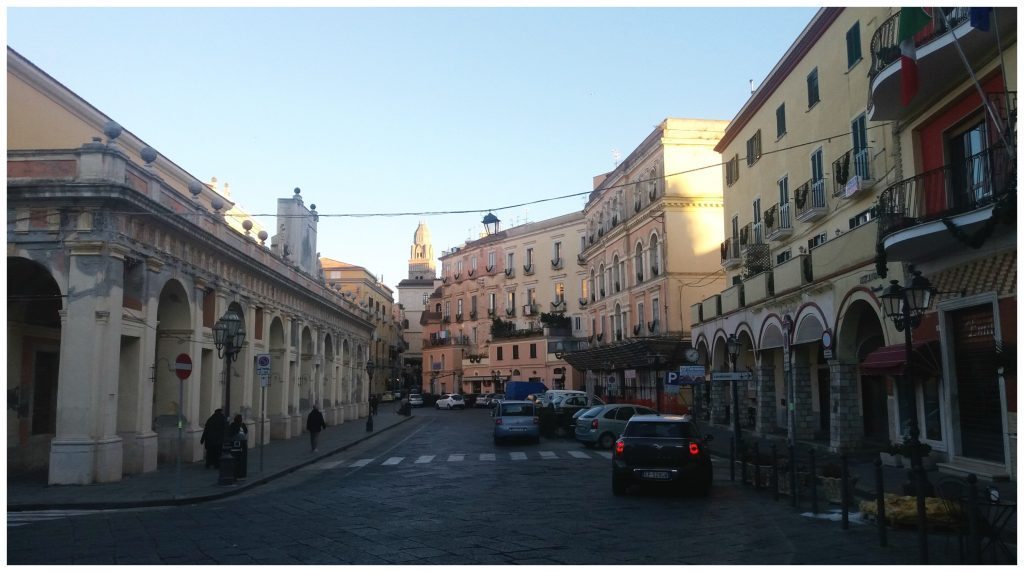 Gaeta near the bus stop

Just up the road on the left is a decent cafe. The red building on the right is the local police station and looking back behind you will see a church higher up.

The photo below is of the church on the hill. The one you see above is at the end of the street where the road turns left to the waterfront. 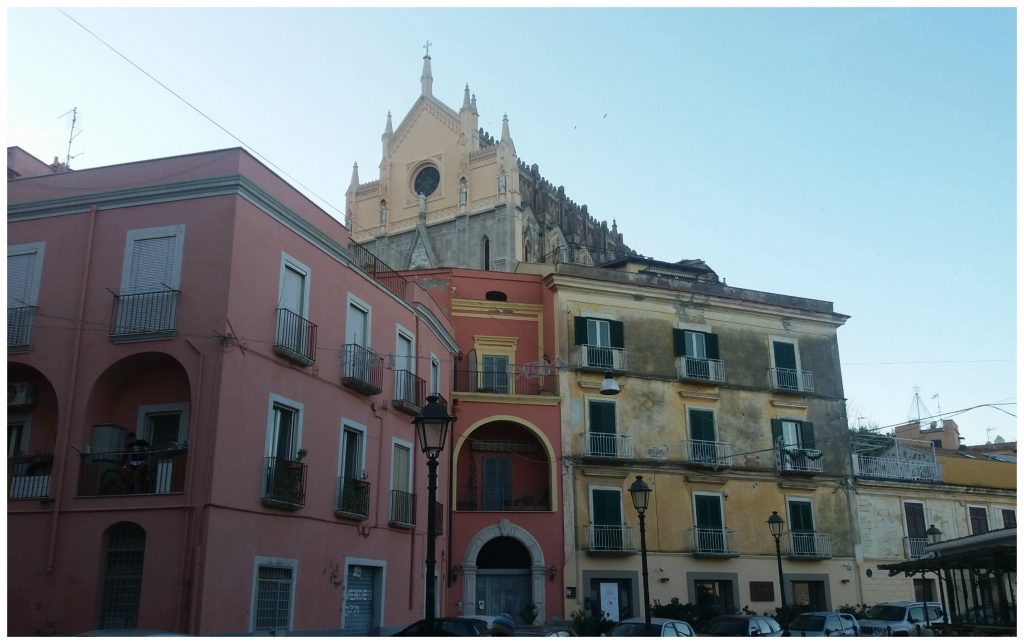 Walking to the end of the road you have two choices, either head left to the waterfront or make your way up and through the old streets of Gaeta to the top of the hill. 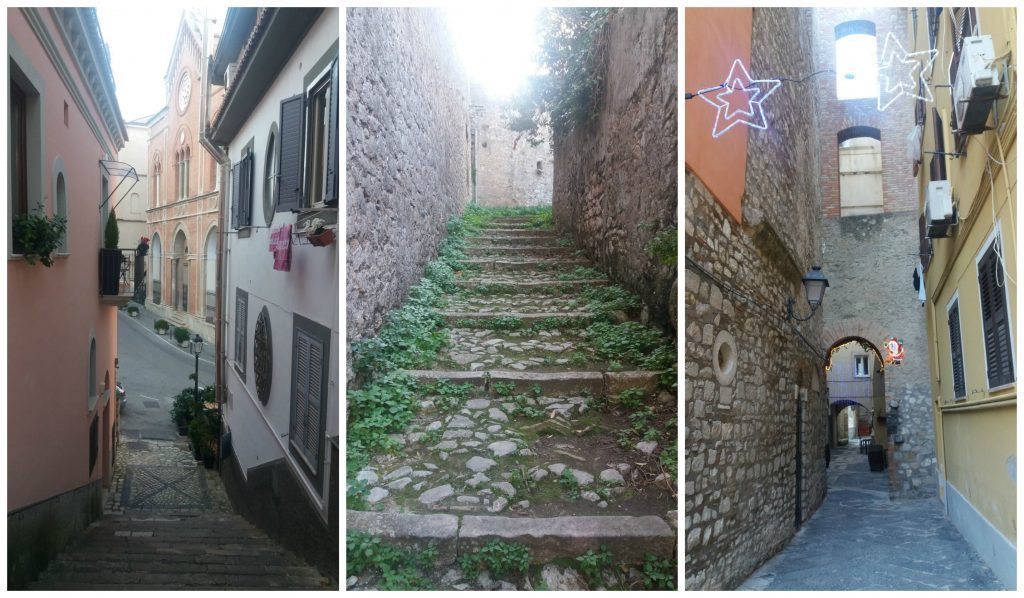 Lots of steps in the old streets of Gaeta

It is an enjoyable walk through the small ally ways past many homes. Not sure that I’d want to be the postman delivering here though. 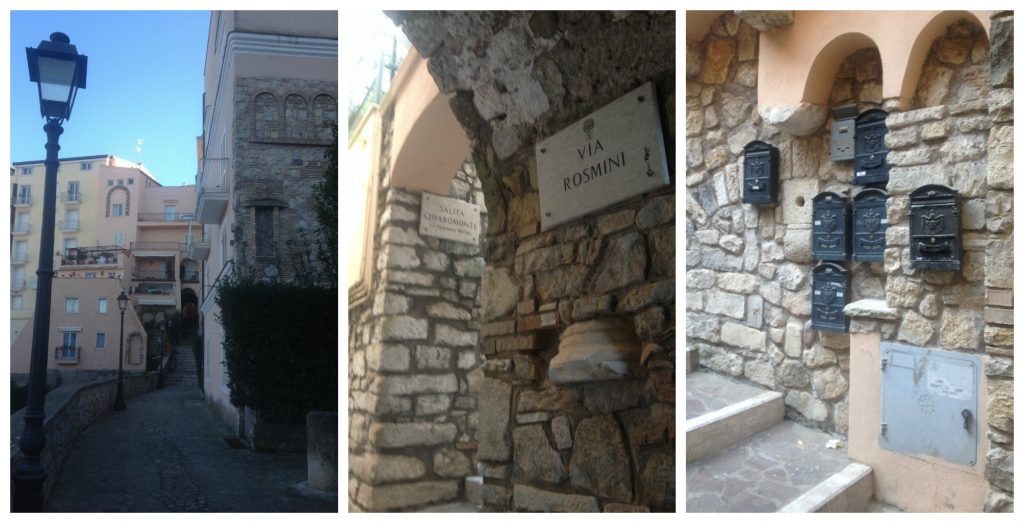 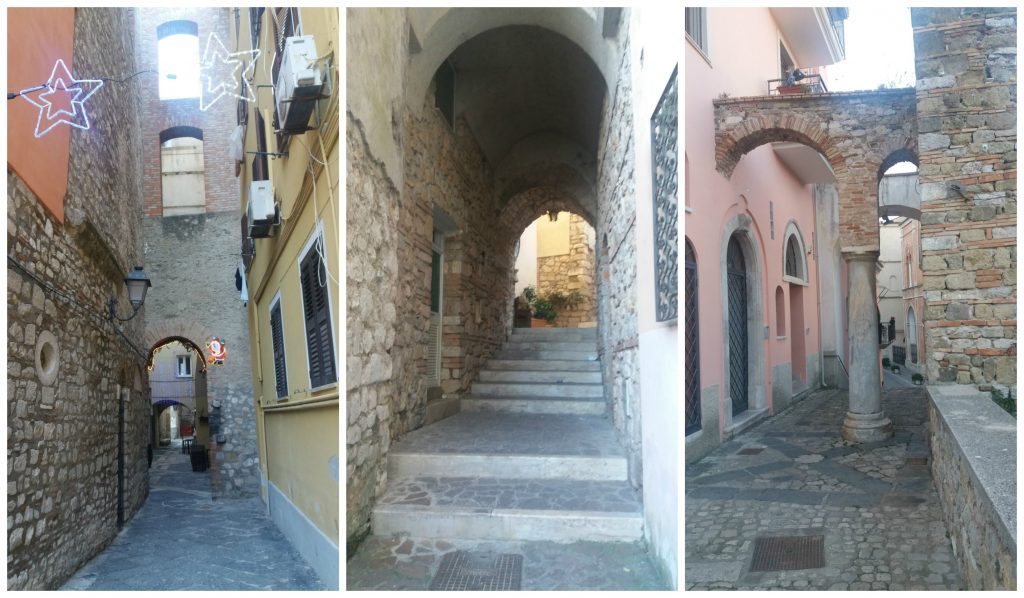 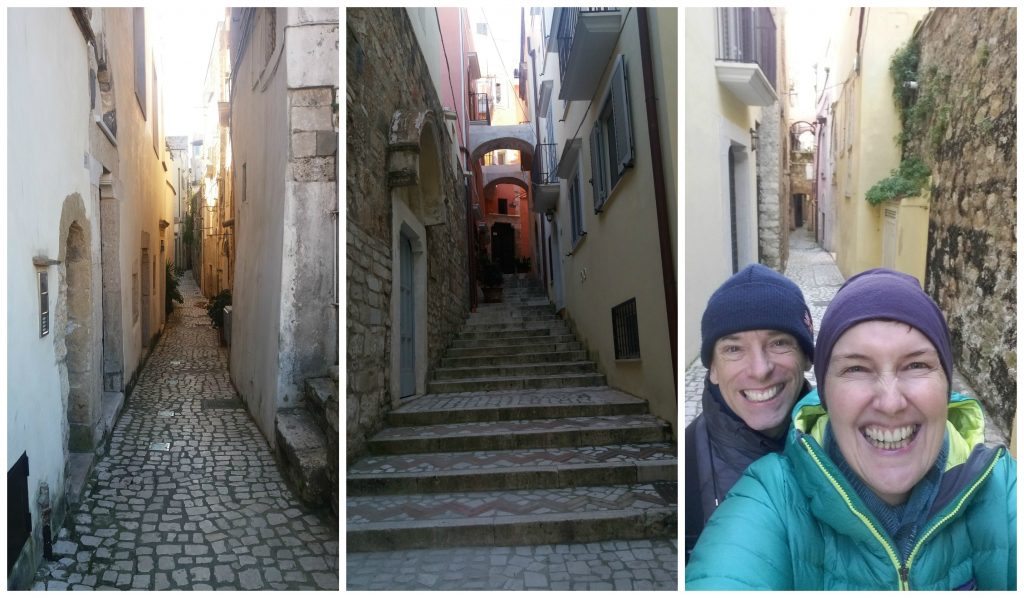 At the top is a military zone which obviously has restricted access, but you get some nice views over Gaeta and also to Formia in the distance. The old fortress belongs to the military and from here you can follow the road back down. 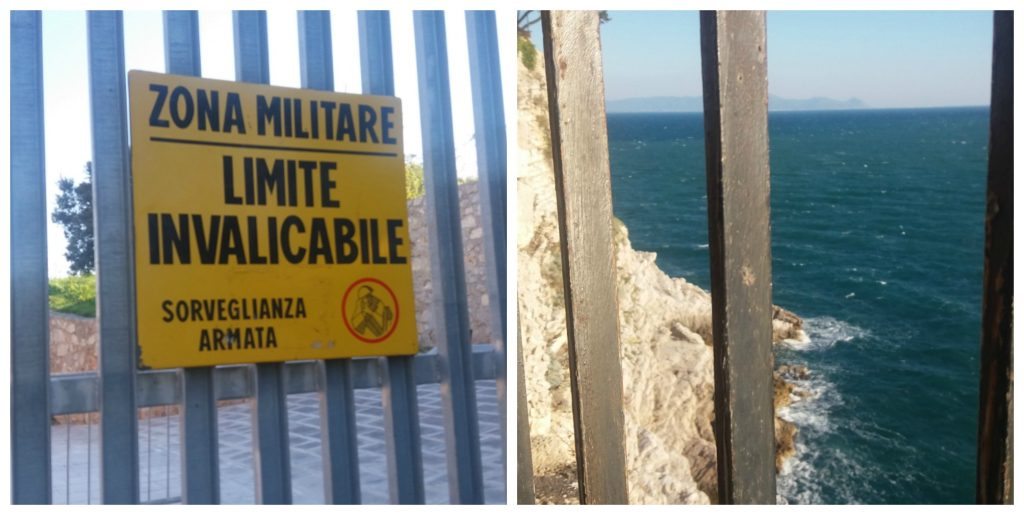 The top of the hill is a huge military zone

I guess this fort was an important lookout in protecting the coast from invaders. 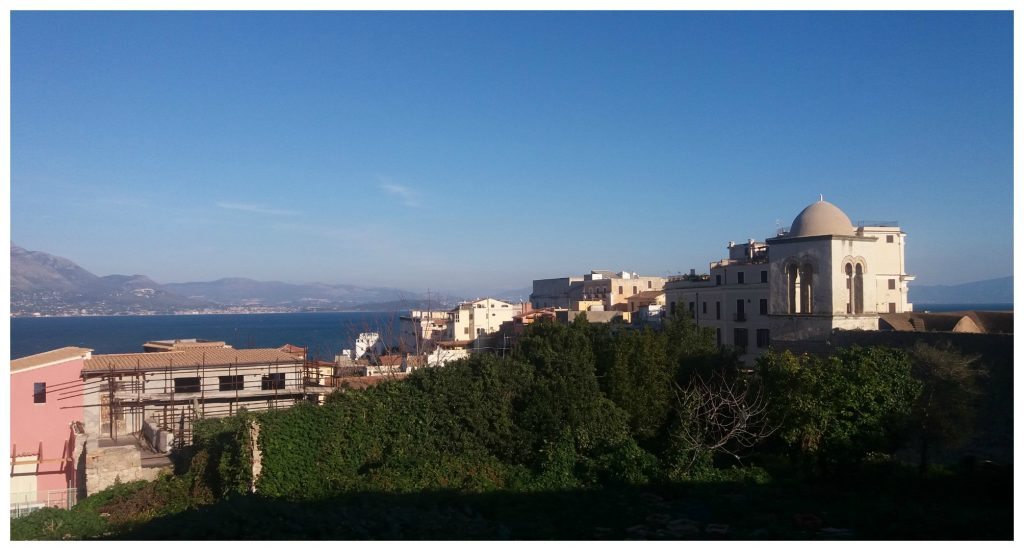 Views from the walk up in Gaeta 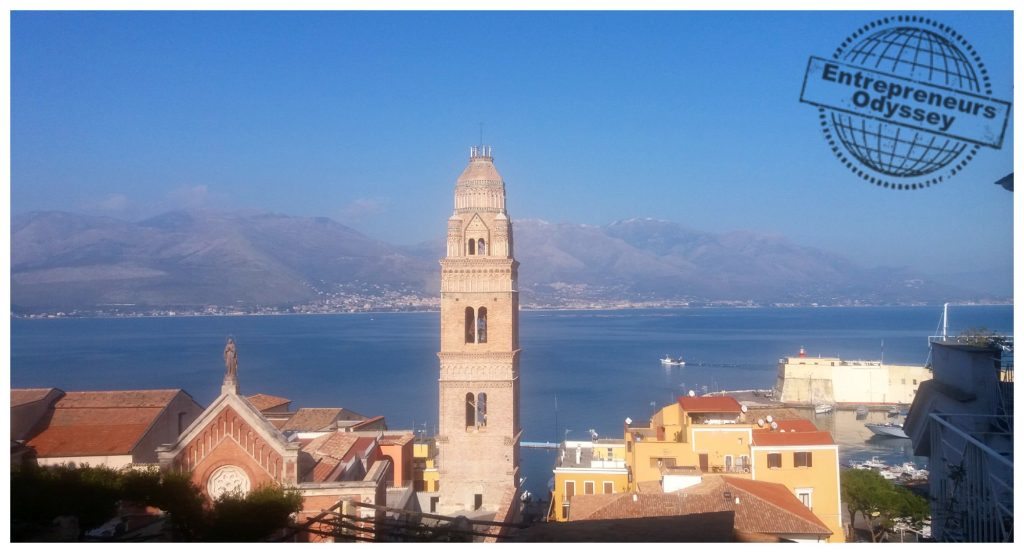 View over old Gaeta with Formia in the distance

The cathedral of Gaeta stands out with its tall tower catching the late afternoon sun. 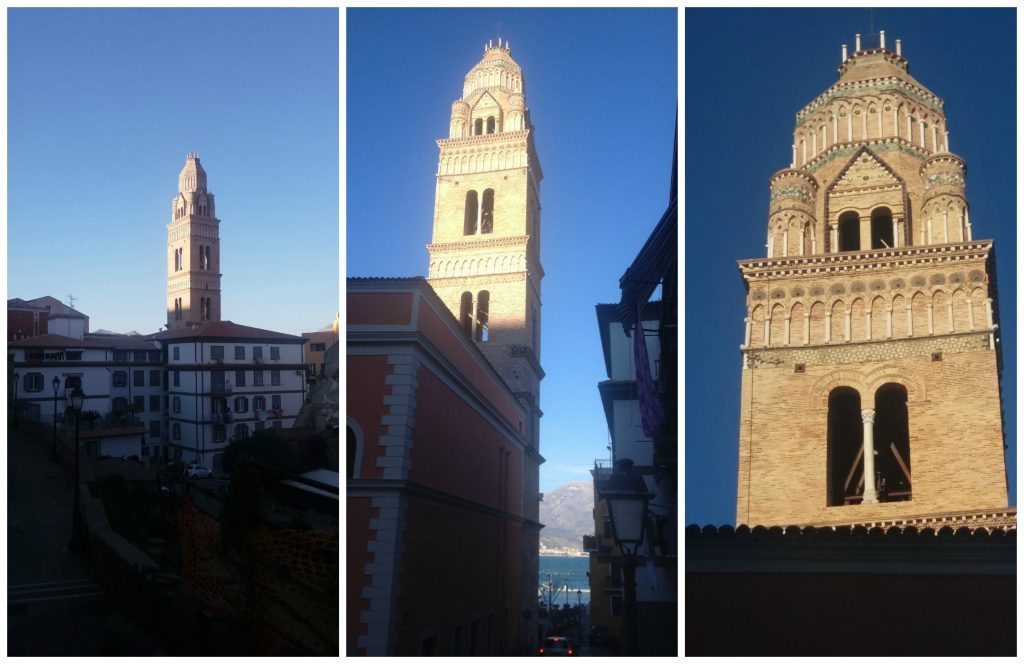 Also known as Rettoria del Tempio di S. Francesco d’Assisi. You can walk up to here via the street that winds its way, that way you don’t have too many steps to traverse. We got here via the old medieval town of Gaeta which is well worth a walk through if you can.

Once at the top of the old town you can walk around, take in the views and then follow the road back down. 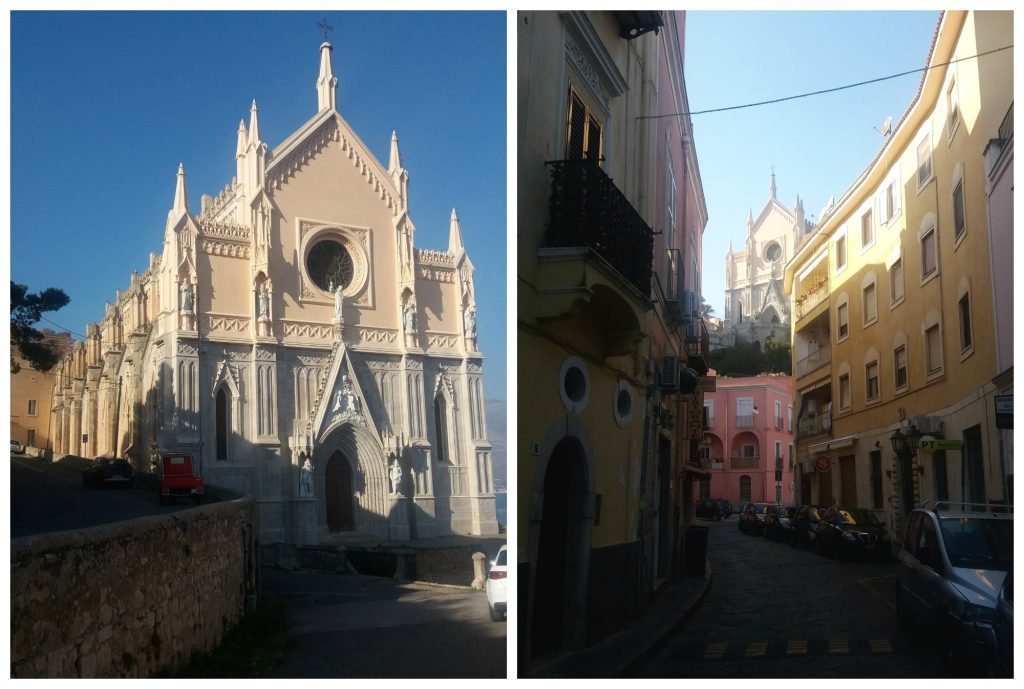 From this church you get probably the best views over Gaeta. See what I mean by being worth the effort to walk up.

Back down at sea level it was high time for a bite to eat and a coffee fix. This was the cafe we passed walking by earlier. They had a delicious chocolate torté and the coffee was great as well. 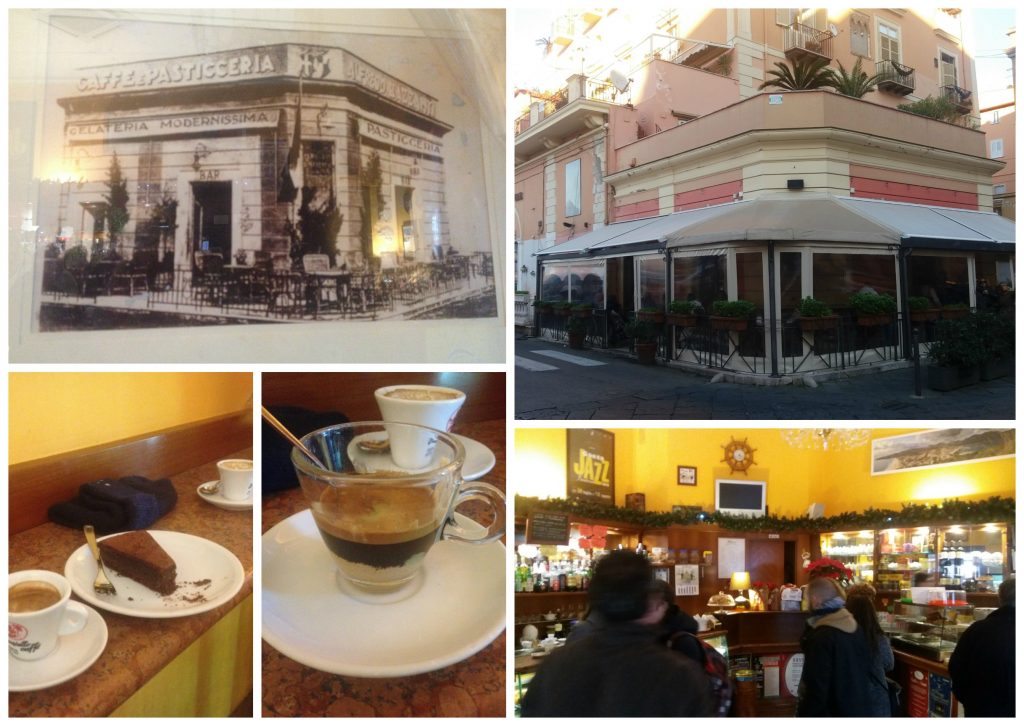 Typical for Gaeta is a dish called Tiella.

Simply put, it’s like a pie. A crust on the base a filling spread over, and a crust on the top. This is then baked and cut into slices to serve. They also call them pizza and they have a variety of fillings.

The original Tielle or Tiella was made with octopus. We tried one with vegetables, and even though it had no fish in, it had fish flavour and aroma. Tasty, but not something we’d have to return desperately for. Not feeling satisfied we searched for something else, albeit later than lunch time by now.

Tiella, a typical dish from Gaeta

Walking away from the old town of Gaeta towards the yacht harbour we passed another church. 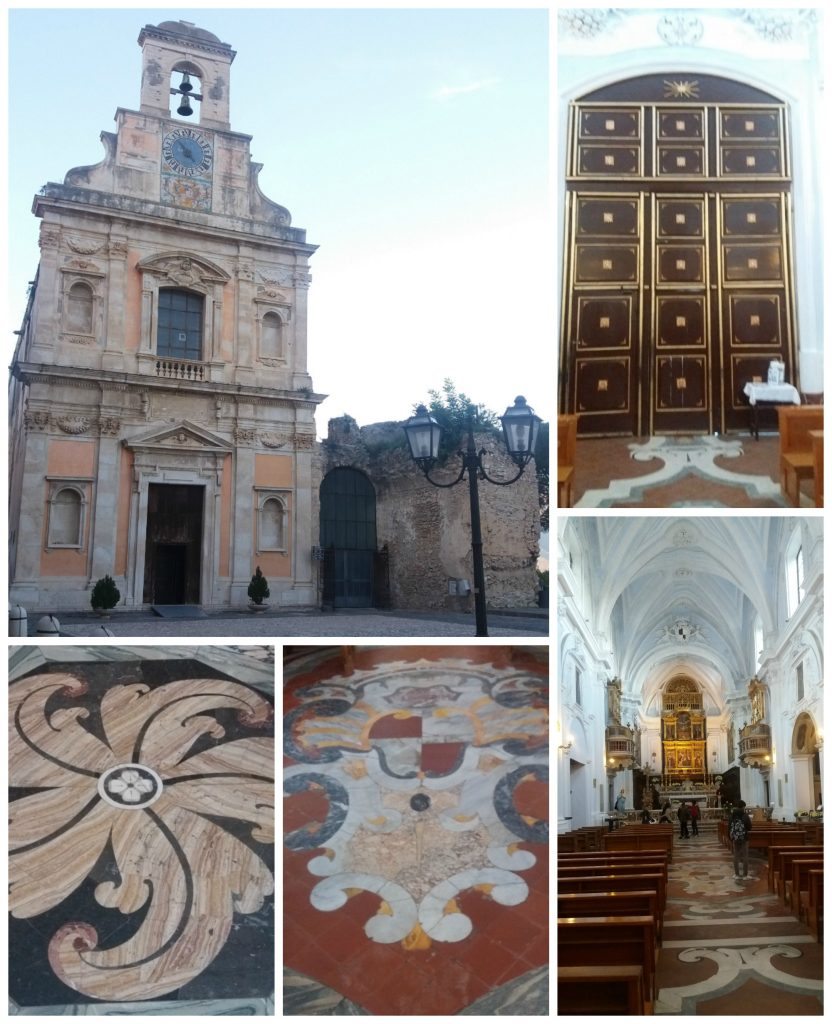 We found this place called La Locanda dalle Gemelle. A few patrons were still inside and we wandered in. The waiter welcomed us and we ordered. I will remember it as one of the best pizza’s we have ever had.

Crispy yet not burnt in any spot, seasoned nicely, not flooded with cheese or sauce and just enough ham and mushroom. Also very good value at €23 for two pizza, two beers, two coffees and a tiramisu.

Lunch at Gemelle in Gaeta

The port of Gaeta 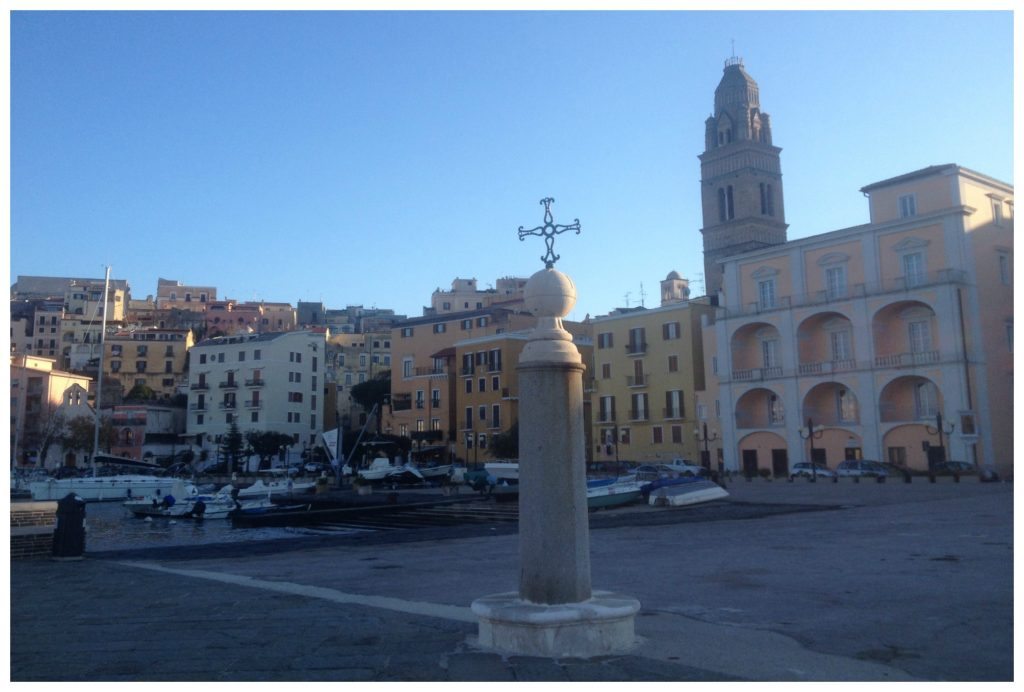 At the port in Gaeta

This is where you find the coast guard and a Nautical school as well as a great spot to sit and take in the view with an ice cream. 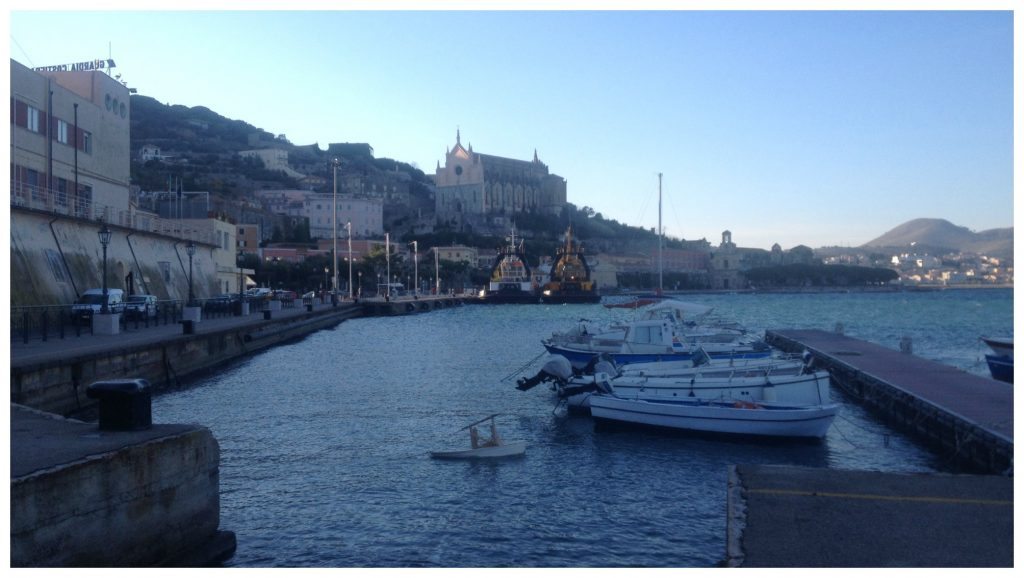 Today was a wonderful clear and warm day and the sun blessed the coastline with a glorious golden glow as she disappeared. 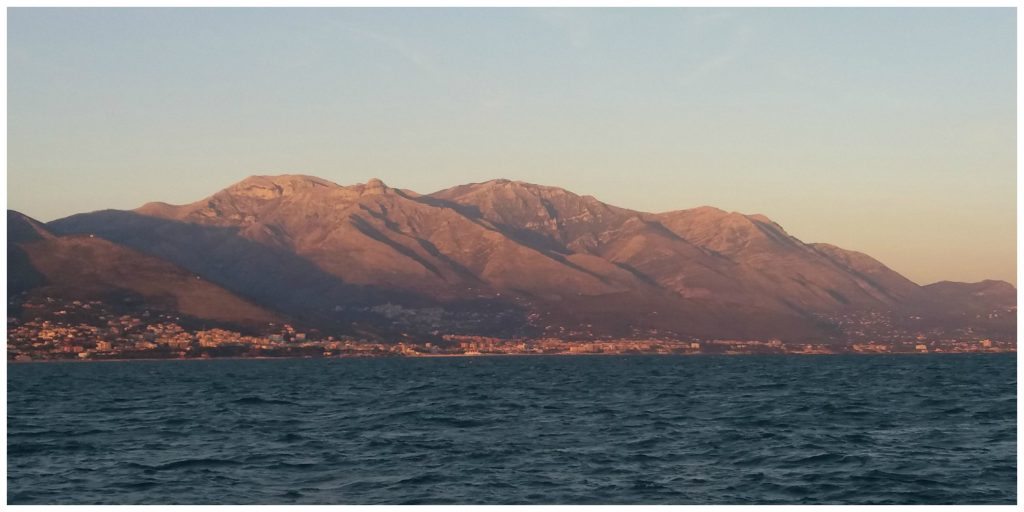 With Christmas approaching Gaeta was in full festival mode. Each year the town of Gaeta puts on a colourful display throughout the town with lights, music and a variety of nativity.

The streets are cosy at the best of times, add the ambiance of Christmas and the abundance of families and friends to the mix and you’ve got a sleepy town full of action and joyous celebration.

People wandering up and down the lanes, stopping for a festive snack, a drink, or just to take in the next festive display.

For those feeling a little more active, near the church tower is an ice rink and for the younger kids there are a bunch of activities going on. 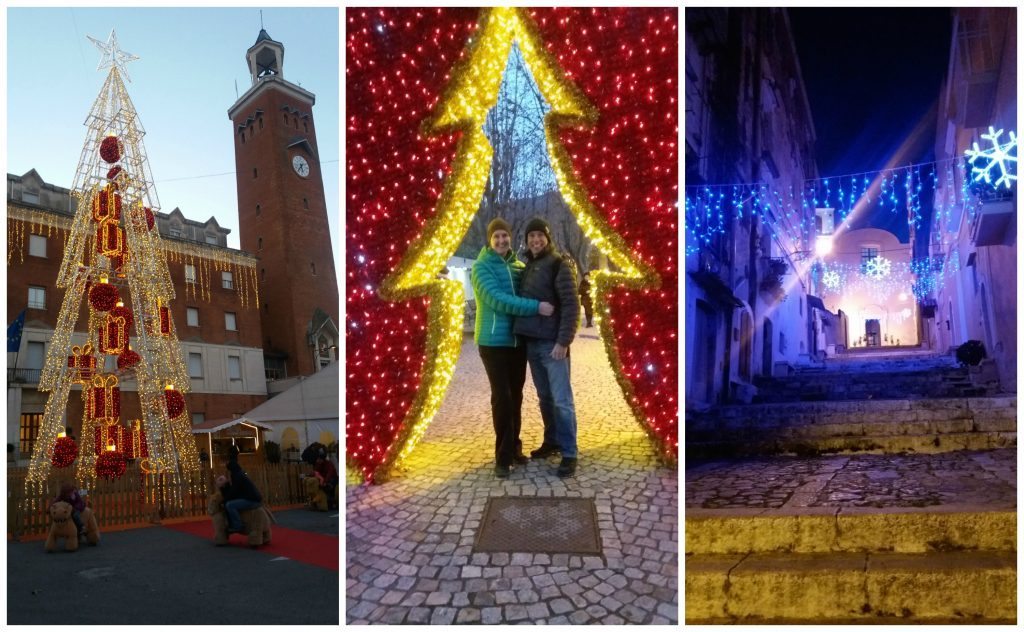 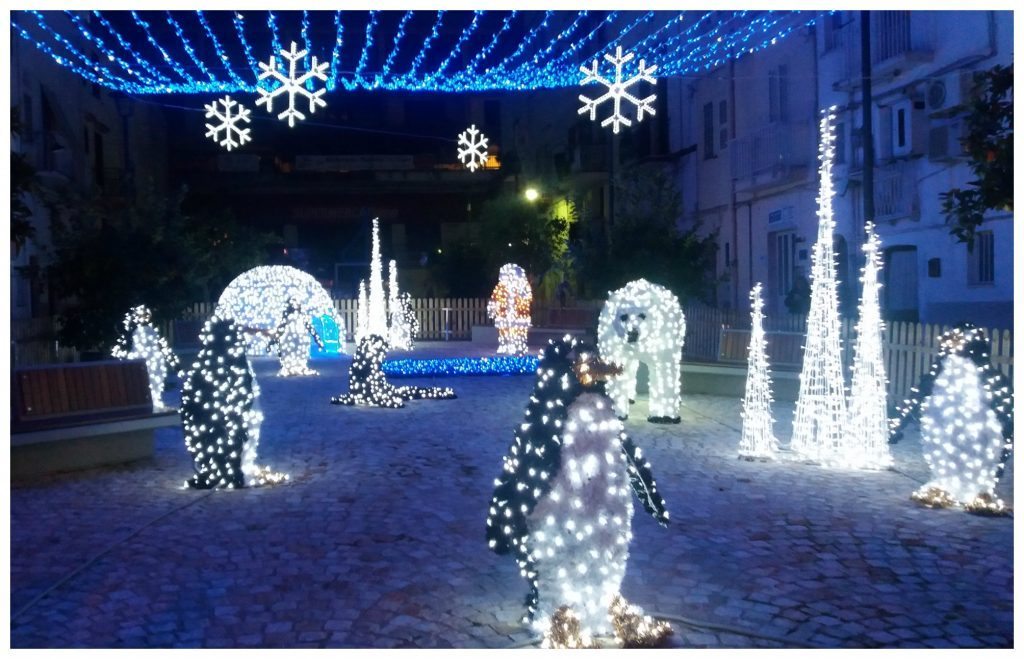 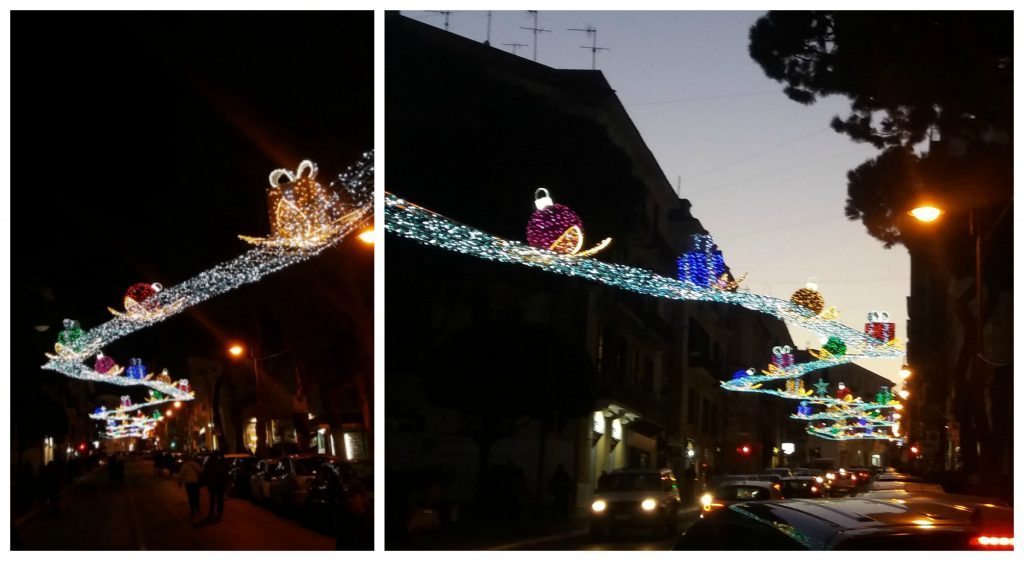 Street lights at Christmas in Gaeta

That concludes a full day of exploring Gaeta. From walking in and around the old town, up and down lots of steps, taking in amazing views over the town and a fabulous sunset on Formia. Nourished with great coffee and pizza, what could complete the day out more than the atmosphere and experience of the famous Christmas lights of Gaeta.