Day 9 of Our Camino

Up early as normal, sleeping in is almost impossible in the Albergue’s, especially the cheaper (Hospital) ones, as they are very busy and fill up fast.

Imagine upwards of 30 people trying not to make noise… It’s not going to work. Sure enough, the first torches or head lamps go on and beams of light cross the room like searchlights looking for an enemy in the sky.

Add to this the to and fro from the bathroom with the squeaky door that closes with a thud, by now you’re well past trying to catch a few more zzzzz and with that, up we get.

Todays walk was another long one, but slightly different. Not far out of Estella is a fountain, not what you’d normally expect along the way while walking the Camino. However, this fountain has flowed since 1891 and many a pilgrim has filled his/her cup with the flowing grape juice.

The wine fountain from Bodegas Irache

The wine fountain from Bodegas Irache on the Camino

Just a bit less than 1 km out of Estella you can fill a cup, water bottle or even your shell and drink some free wine.

The two ways come together again in Cruce about 12 km from Estella.

We chose the low path, not just because of the wine fountain in Irache, but also the low path passes through Azqueta which has a cafe for our coffee fix. 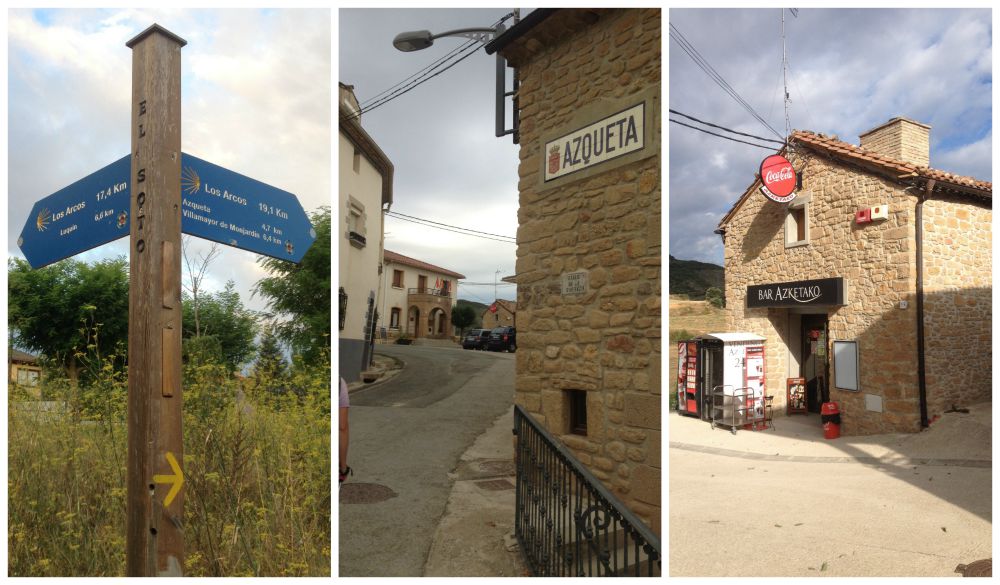 The way to Los Arcos via Azqueta on the Camino

The coffee was quite good and we enjoyed a short break here. The cafe has lots of other items as well.

By the way, according to the map, you can take a shortcut from Irache to the high route, we didn’t do that and can not comment more.

The way on the Camino

The long way that is the Camino

The way is quite dry-looking around here, with views for miles. In the middle of nowhere is this pilgrim rest stop. Basically it’s a small shelter and next to it a man brings in his mobile van. It’s called Eduardo according to the map.

Offering a selection of cold and hot drinks and food. He runs a generator for power and also has tables and chairs, it’s a really good set up.

The Pilgrims rest stop along the way on the Camino

After a beer we are ready to continue the next 9 kms.

We reached Los Arcos in good time today and found an Albergue quite near the centre. This place is right on a corner along the way and lucky for us, we manage to get a private room with a small balcony and a view to the street below.

The town of Los Arcos was preparing for the bull run spectacle which is still very popular here in Spain.

The bull running in Los Arcos

Cettina & Inge arrived a little later and stayed in the same place. The big wooden gates were then locked in place and padlocked up.

Crazy people at the bull running in Los Arcos

These strong gates were for our protection… They were the only barrier stopping the bulls entering. As you can see, the bulls run up and down this street chasing young lads who run in front, often at full pace, trying to keep up a safe enough distance from the horns clattering along behind.

At any moment, the runners will hit the gate at pace and haul themselves over to safety as the bulls close in.

It was quite a spectacle to see, however a very cruel part of the tradition comes later.

A safer viewing spot behind the gate

Moni watched from the balcony while I and the two girls were closer to the action. I think the runners were quite safe so long as they don’t fall over!!

We had seen enough of the bulls running and decided to make our way into the center of town. Only certain streets were open until the running was over, then you could walk freely again.

With good appetites we found a place for dinner and enjoyed our meals and wine.

Pilgrim menu night out in Los Arcos with the girls

Our Camino – Day 8, Mañeru to Estella
Getting Into Shape – Part #4