TGV trains from Basel to Bordeaux via Paris then a local train to St Foy Le Grande. And how to get from Gare de Lyon to Gare Montparnasse. 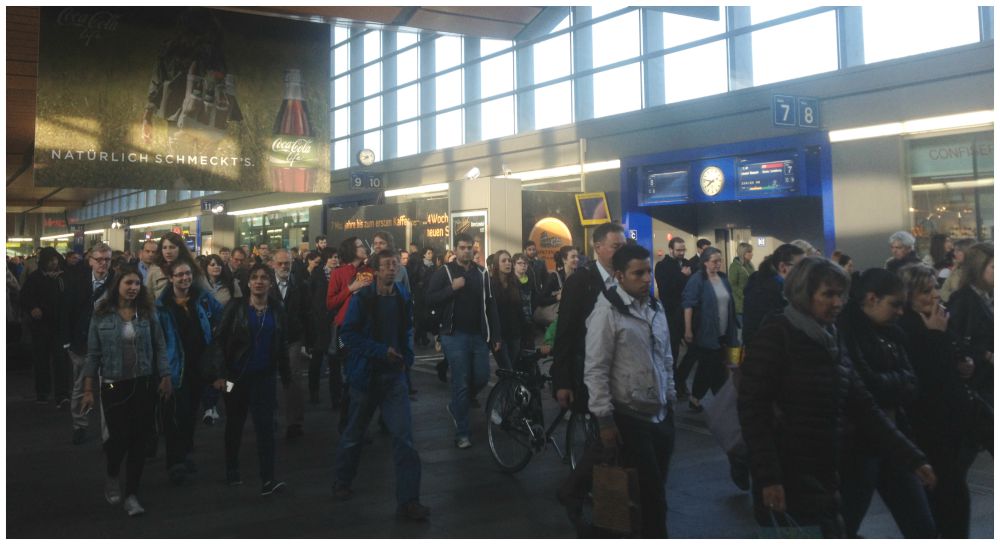 Rush hour at Basel station, oh no thank you

After saying goodbye to Moni’s sister in Basel we made our way against the flow of foot traffic to our designated platform in anticipation of our journey on the TGV fast train to Paris. I remember many years ago when we first went for a train trip on the TGV with the excitement of this new and very fast train.

Today it feels just like another train ride with so many other standard trains looking similar to the slopping nose of the TGV. And having experienced 300kmph train speeds on the Shinkansen in Japan, this snail train just lacks the wow factor of those early years.

We waited in our area where we thought the carriage would stop and we were not far off the mark. Although I question why these stations in Europe haven’t taken on the marvelous system that Japan has at its stations where the markings on the floor clearly state where you need to stand for each train and respective carriage. It eliminates all the last-minute hassle of finding your carriage, no wonder the Japanese are the train experts of the world. 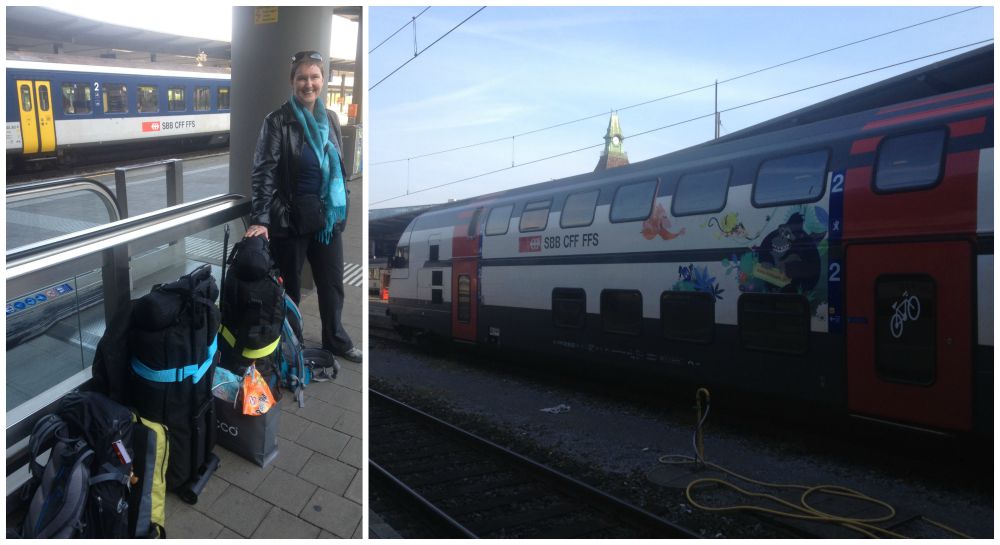 Waiting on the platform in Basel with SBB trains

The TGV arrived on time and we found our seats. Once again not much space for luggage but there was a rack in the middle of the carriage for some bags. The lady opposite us asked us to move our bag from above her seat so that she could put hers there because she was sitting there. I totally understand where she is coming from and respect the fact that a seat has the right to store the bag above it, so no problem there.

As you can see, the luggage racks are easily filled with bags, it’s not like people travel with no belongings on these long trips… Or do they? 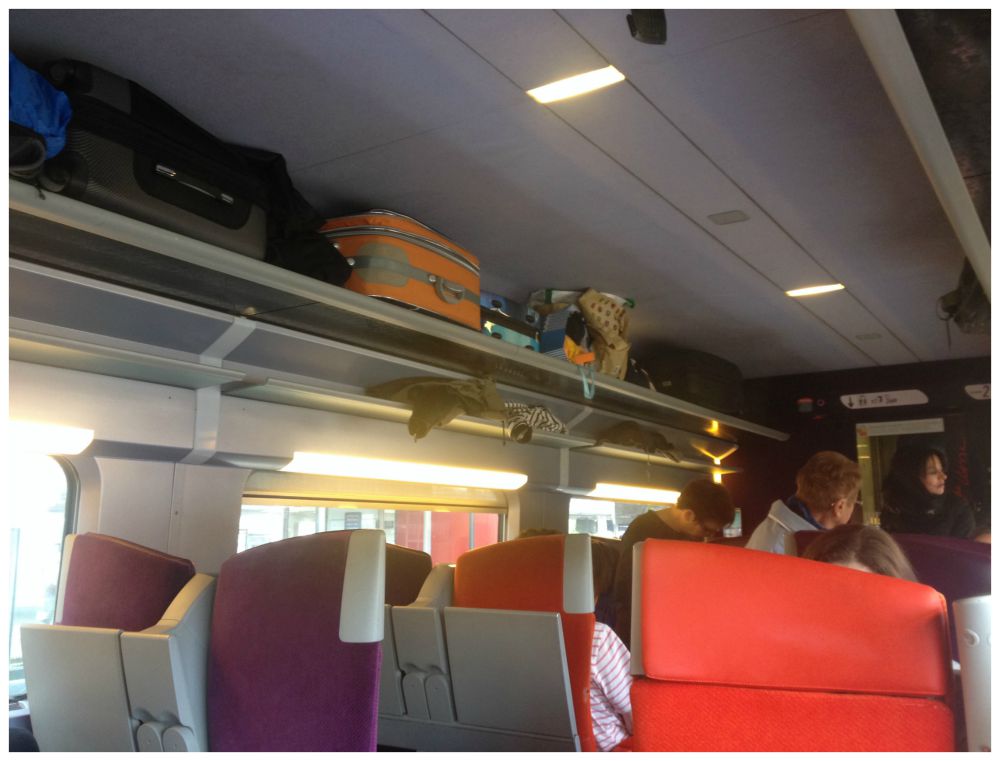 The interior is very clean, colourful and modern seats with lights and tray tables.

The journey to Paris was smooth and on time and we consumed our homemade sandwiches on the way. Once in Paris Gare de Lyon we have to change stations to Paris Montparnasse to catch the next TGV to Bordeaux. Before you can buy the ticket the system warns you about the station change requiring enough time to make it, you buy at your own risk.

When purchasing the ticket online I followed this advice on how to find the cheapest train tickets in Europe and once again scored some bargains. I thought that over 2 hours would be enough, and it was, but less than an hour I would NOT be doing it. 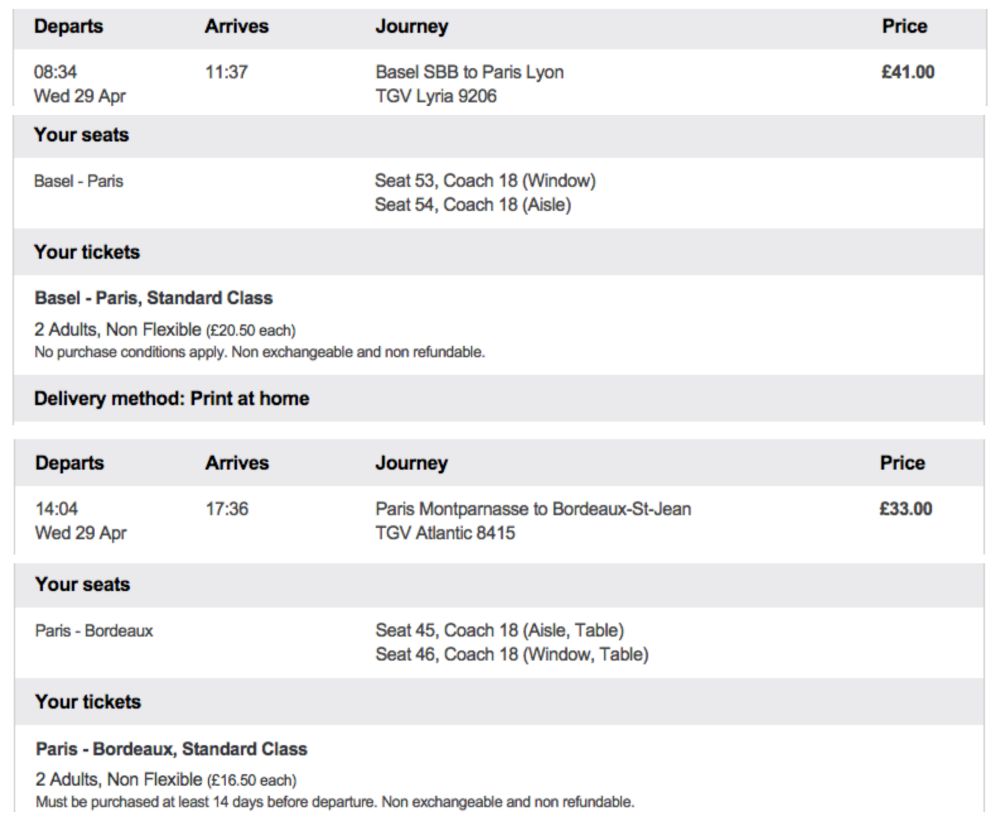 Trying to find the right way to go, the right ticket machine and then the platform is not easy (for those doing it for the first time). Anyway, I had a rough idea of where we had to go and looking at a subway map I confirmed our route which was only a few stops with a change… Next we found a ticket machine that only took credit card for a 3 euro ticket.

Most places on the subway were quite easy to navigate, but getting through the stupid barriers to get access to the platforms is ridiculous. One man was having a real tough time and actually forced his way through. Be warned, there are some stairs that you can’t avoid.

On the line M 14 (purple colour) direction to Olympiades we went one stop to Bercy and changed to M 6 direction to Charles de Gaulle Etoile (light green colour) for 11 stops to Paris Montparnasse. It took about 35 minutes for this journey, now add finding the ticket machine, the right platform etc and you have nearly an hour. 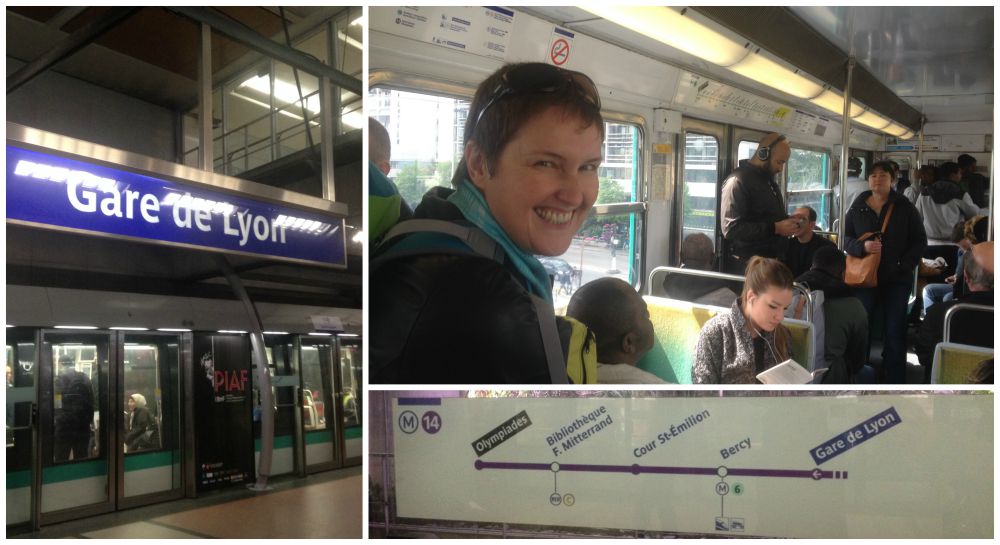 The most expensive coffee ever

Once we got to Gare Montparnasse we made for a cafe and rested up there until it was nearly time for our next leg on the TGV Atlantic to Bordeaux. We had two coffees at this cafe in the station, the most expensive cappuccino ever and to think I was in shock to even have taken a photo OMG 8.45 Euro which is just under $12 AUD absolutely crazy rip off prices. 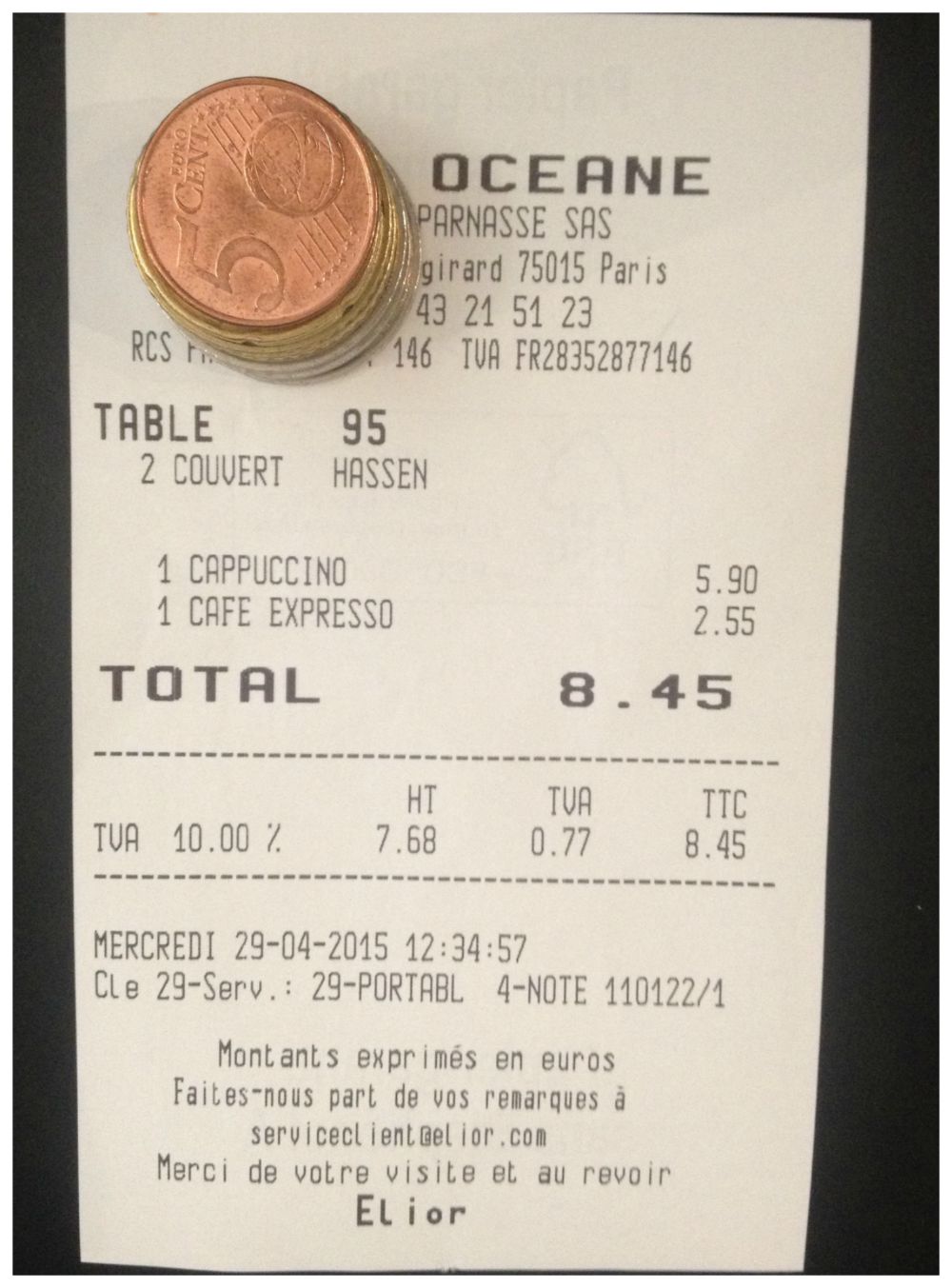 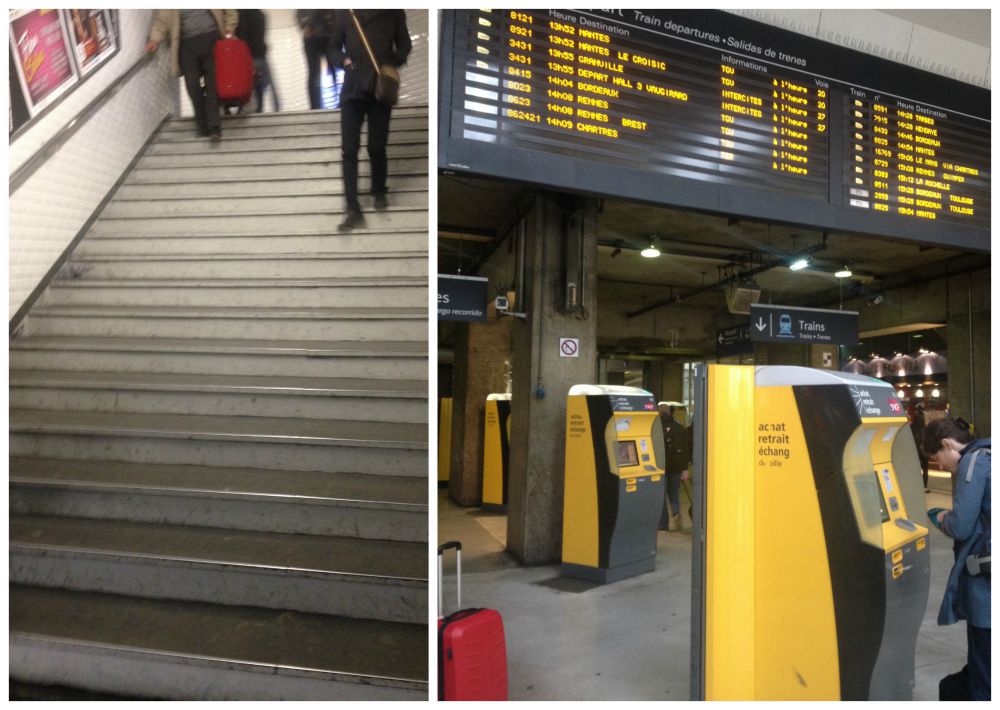 The subway stairs and ticket machines at Paris station

Once we arrived in Bordeaux St Jean I rushed to the ticket office to buy a ticket for the last leg of the trip to St Foy La Grande where our friends would pick us up.

I hadn’t pre booked tickets for this train just incase we had bad connections and ended up being late, most tickets are not transferable at the cheapest bargain price.

The queue was a mile long and naturally only a few counters were open, typical. The tv screen showed a train leaving in 12 minutes and at the rate the line of people was moving I had no chance to make it, the next one was an hour later.

I eventually made it to a counter and asked in English for two tickets to St Foy La Grande, the man spoke in English to me and told me it would be in one hour, I said I know I had just missed one… he checked his screen and said I was in luck and that it was still on the platform, running late. He printed out two tickets for it, I paid and ran to Moni and then as quickly as possible with all the bags made our way up the stairs to the platform and all the way along to where the train was. We got on and 2 minutes later it left, needless to say I was buggered.