If you’re like us and you want to watch a live Sumo event in Japan then you need to know what to expect at a Grand Sumo Tournament. 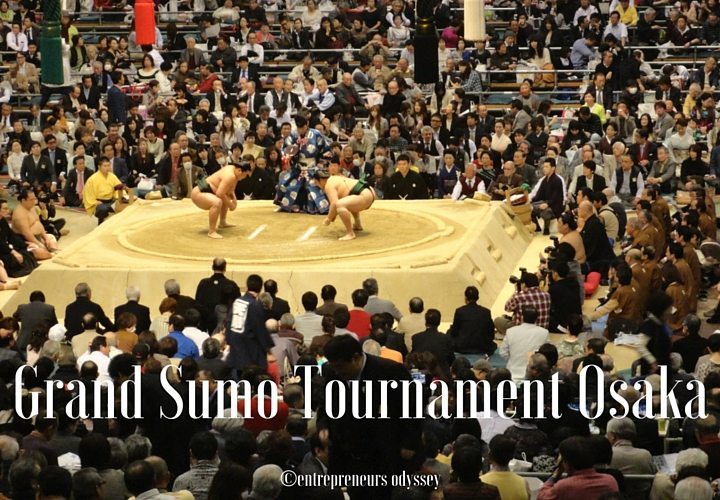 It is pouring with rain today and unfortunately Moni is not too well, yet we are up around 9am and after checking in on some work we head out making our way to Osaka for the Sumo tournament at the Osaka Prefectural Gymnasium also known as Bodymaker Colosseum. 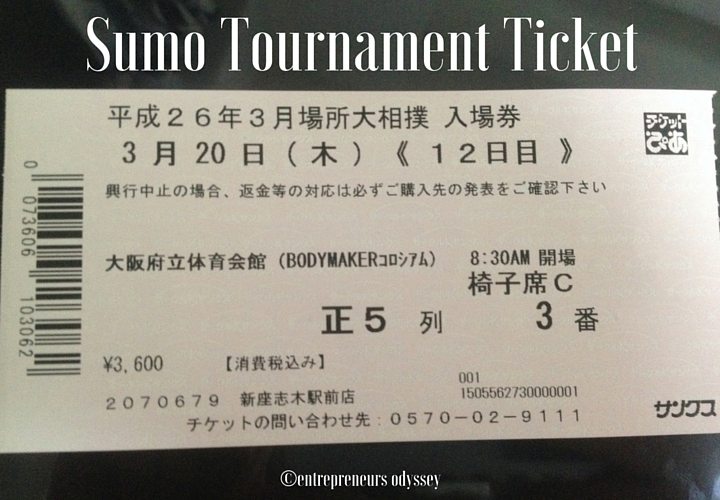 There are different ticket categories and prices for each tournament. I chose Area C North which is one of the cheapest seats but still good as you can see from our photos. I sourced our tickets from Jeff at buysumotickets.com

Our day began at the Hanshin shopping centre which is accessible in the underground of the Osaka station. Here we walked around the food area in awe of all the fantastic displays. The Swiss have great food displays in their shops but this is just amazing. 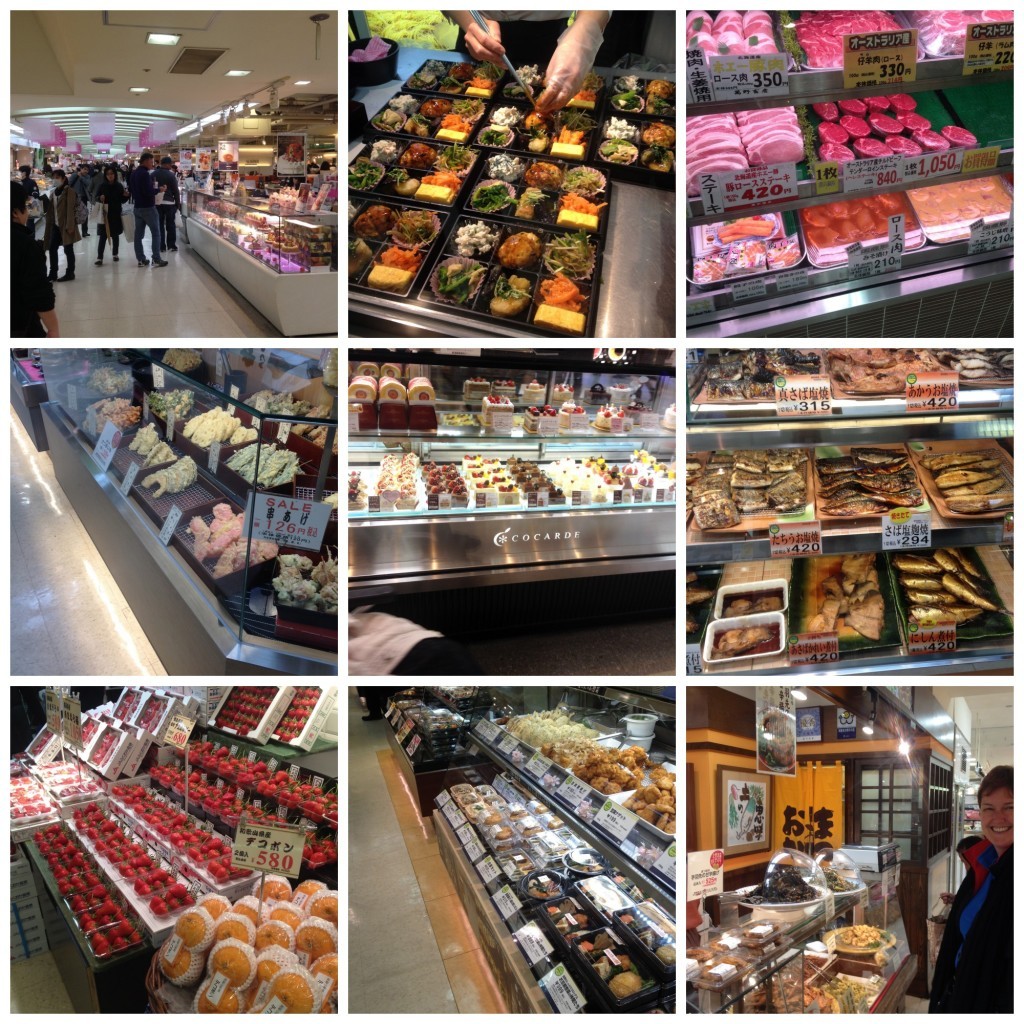 Delicious samples of some items were consumed as we walked around and eventually we purchased a few things for lunch which we enjoyed as soon as we vacated the station. It was still raining as we took shelter and ate. Whilst eating, I asked a man walking by in a uniform which way to the Sumo and he pointed us in the right direction. We started our walk and passed a few sumo wrestlers on the way which confirmed that we were on the right path.

We started our walk and passed a few sumo wrestlers on the way which confirmed that we were on the right path. 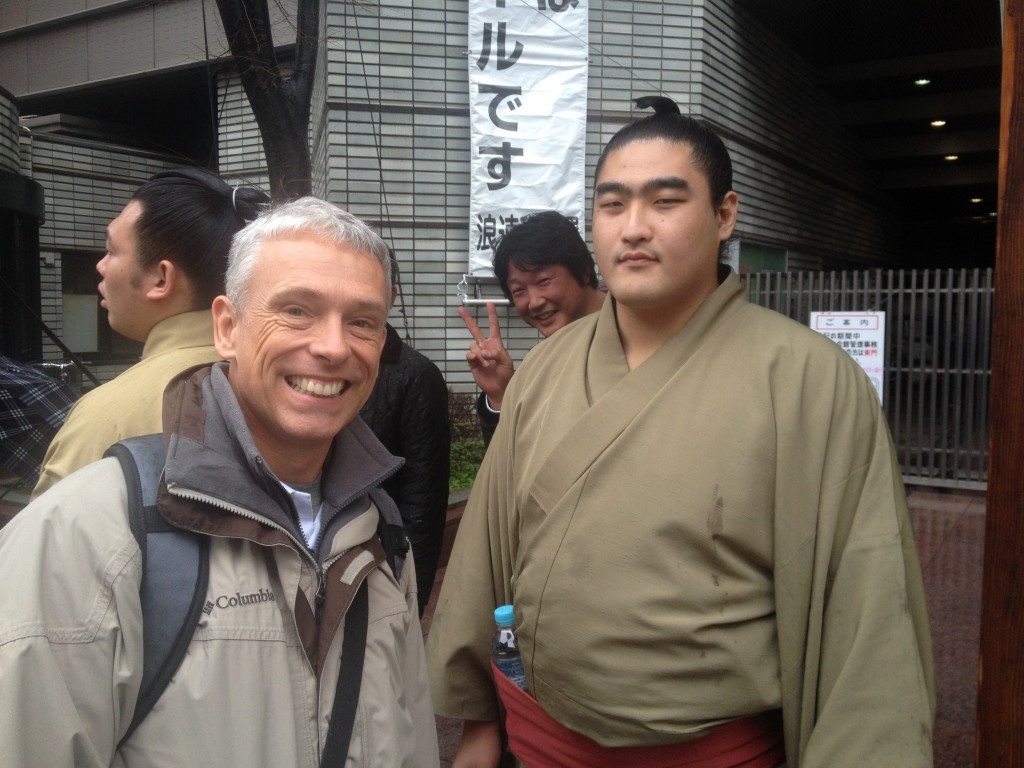 Sumo wrestler (can you spy the photo bomber) 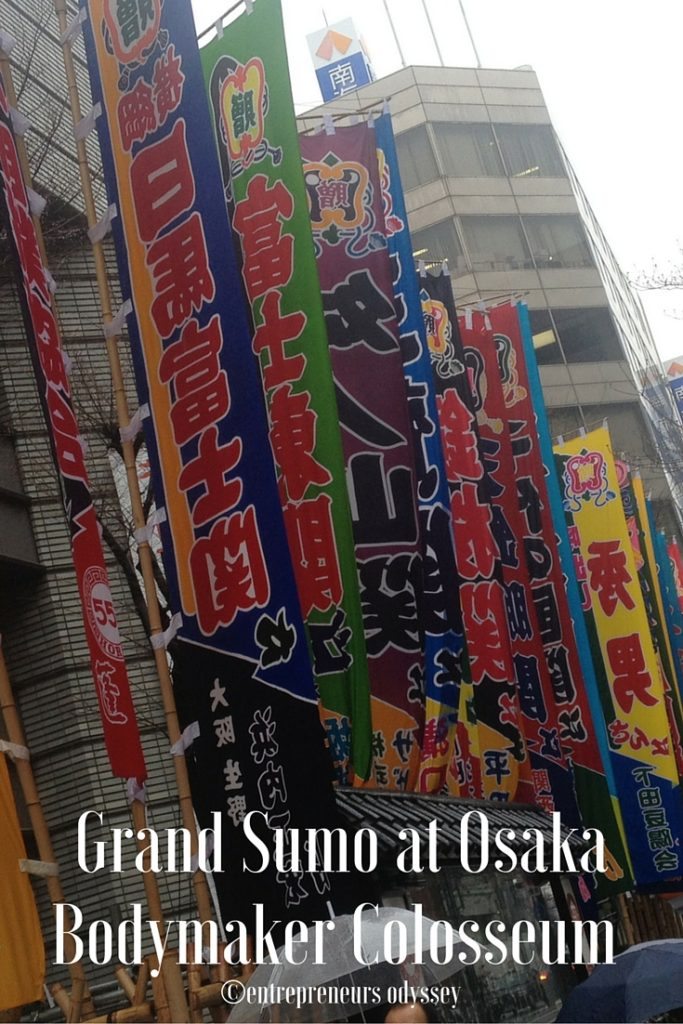 It’s really not far at all from the station, and within a few minutes, we are there. The sumo flags line the outside of the building and people are waiting along the sides for a glimpse of their hero. At first, we thought that they are queuing to get in but soon realised that they were not and we made our way to the entrance. 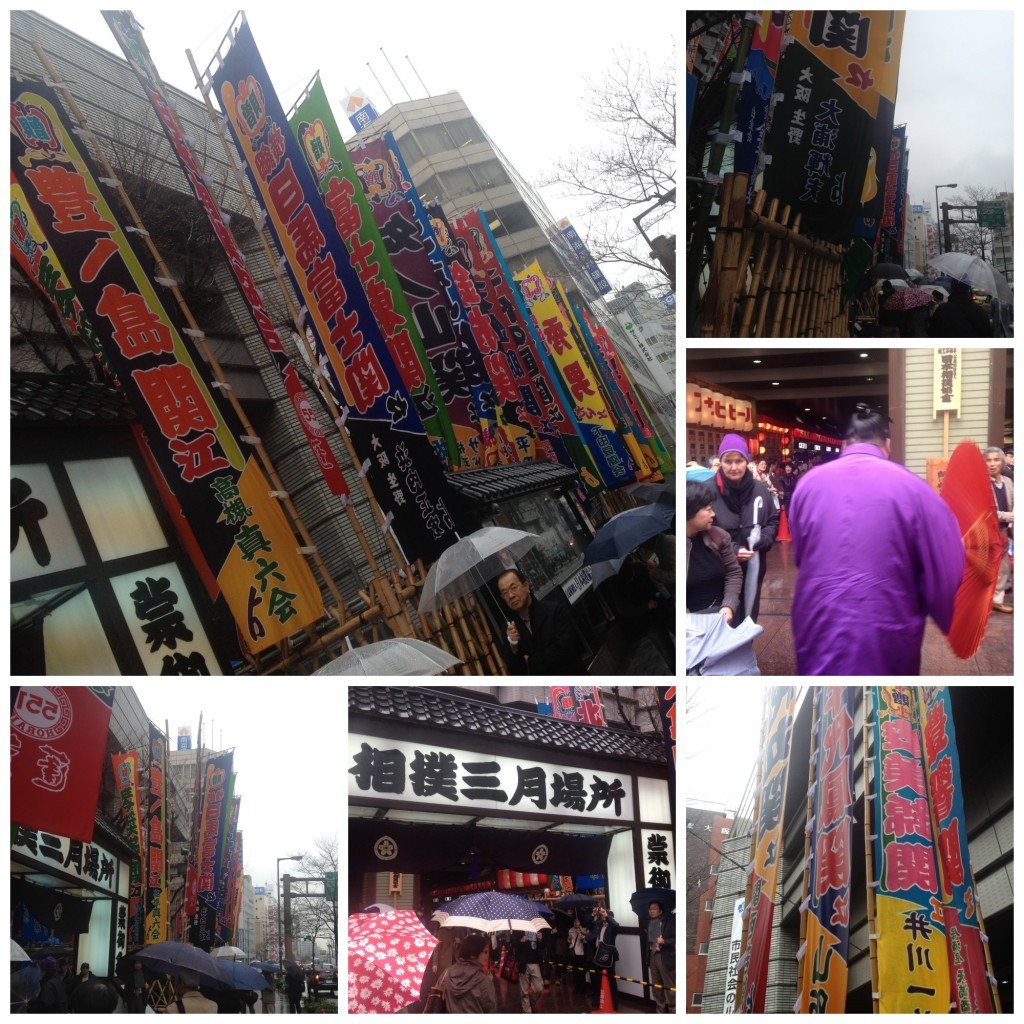 At the entrance, we showed our tickets and received a program in Japanese of which I totally comprehend (not) but we can work some of it out. 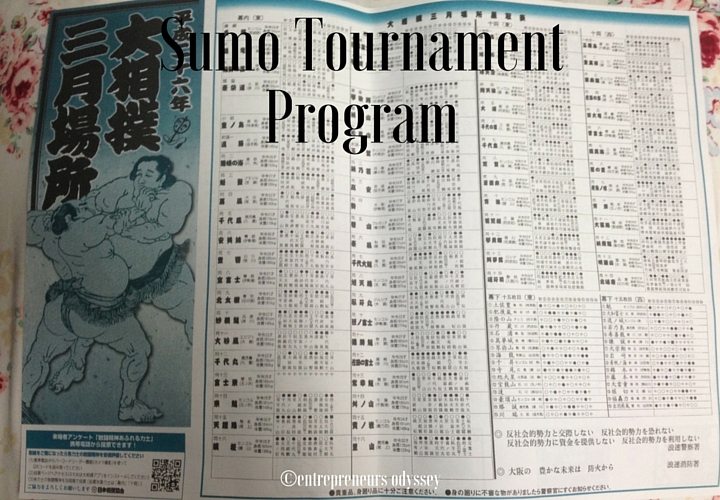 A guide led us part of the way towards our seats and then gave us instructions on where to continue. There are various categories of seating available.

We eventually found our seats with the help of another attendant. Our seats are pretty good. 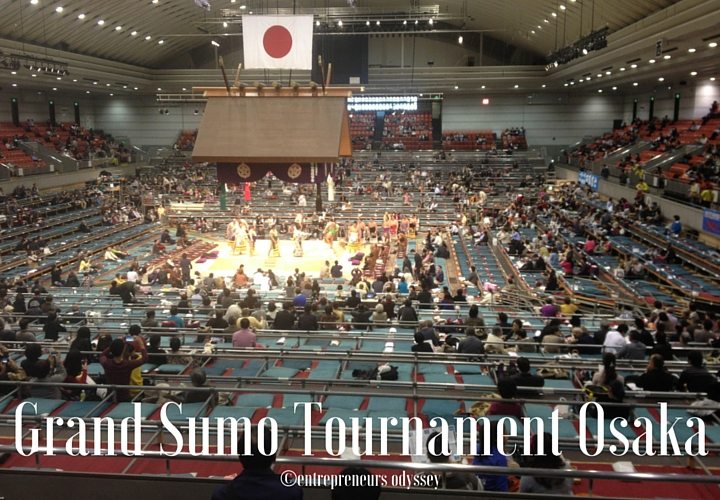 Actually, the only poor seats would be right up in the far corners, but even then you can still see plenty. Our tickets cost 11850 Yen all up, about $130 depending on exchange rates, that included delivery to our hotel in Yokohama.

We took our places and removed the backpack and jackets. I then went for a snoop around as Moni stayed at the seats. I spied a geisha on the way down the stairs (we are on the top level). 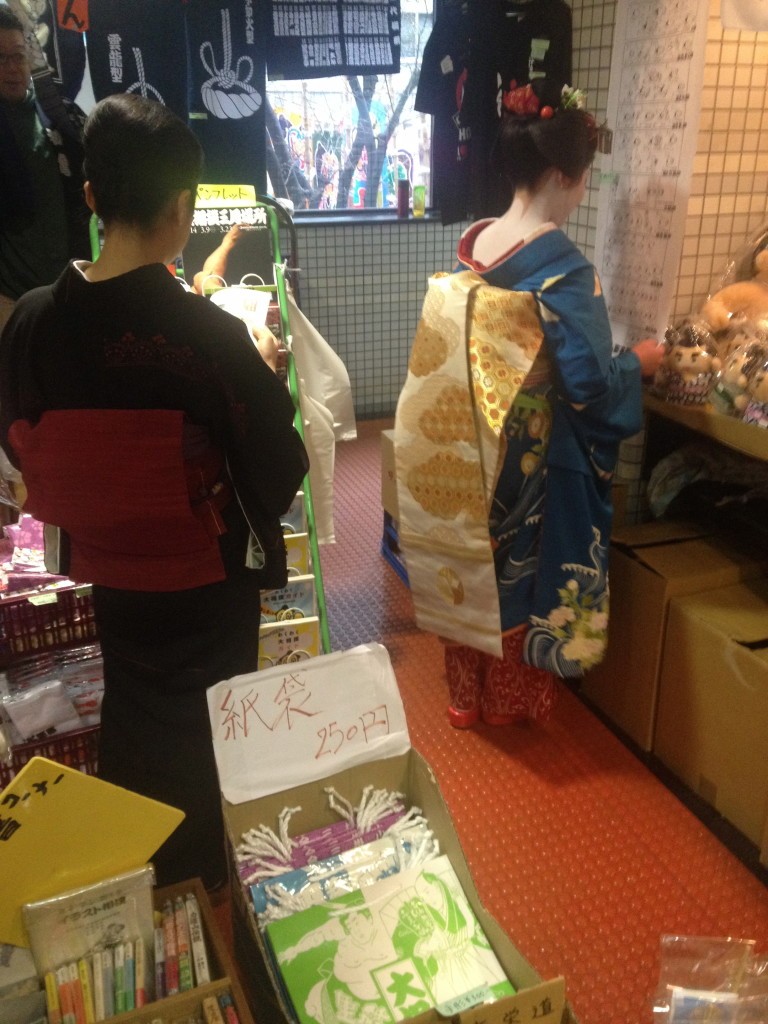 Geisha at Sumo in Bodymaker Colosseum

At the bottom I went and checked out some of the incoming sumo fighters. Next, I followed one up the stairs… The wrestlers have changing rooms, one on the East and one on the West side respectively. Here I spied some sumo men as they prepare for their bouts. These are the second level wrestlers as the main bouts begin at 3.45. By the way, you are not allowed to take photos from the aisles which I found out, lol. (see photo bottom left corner). 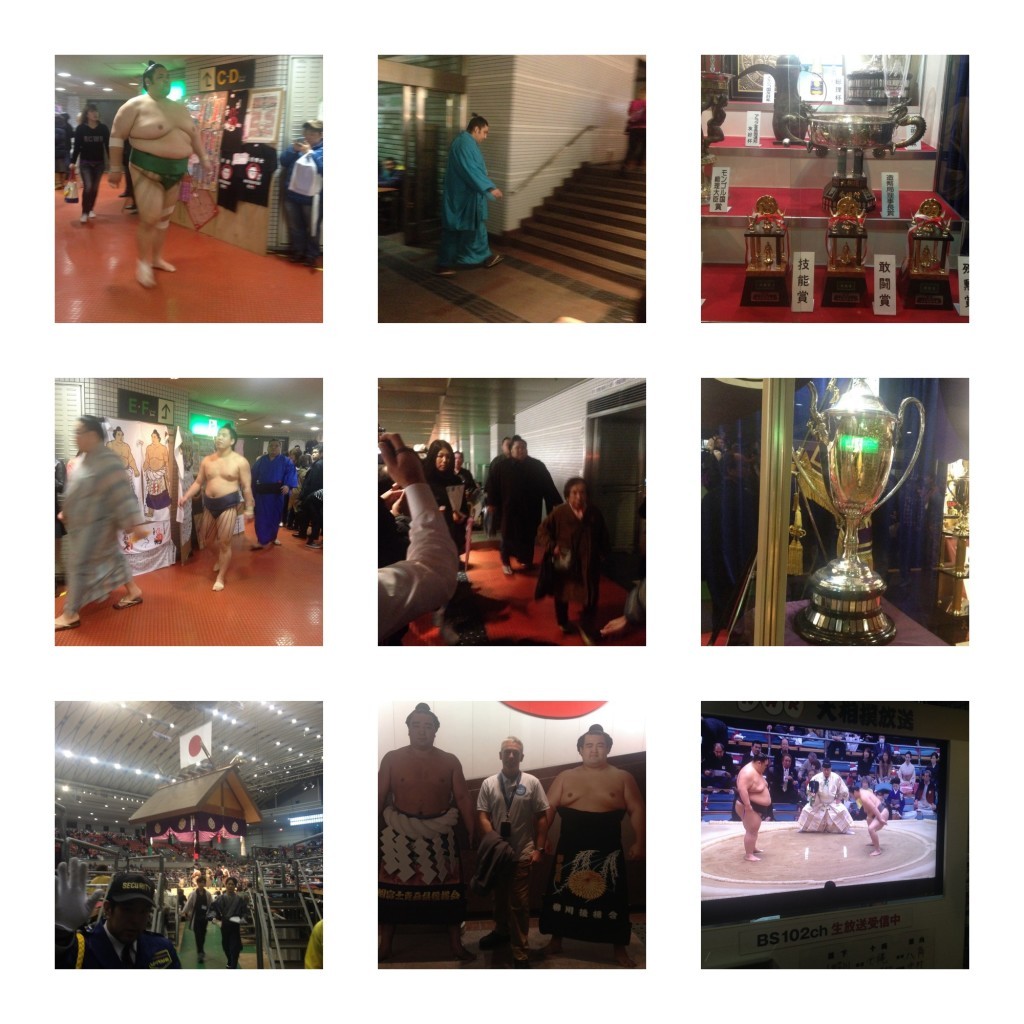 Sumo at Bodymaker in Osaka Collage

After I satisfied my curiosity I returned to Moni and enjoyed the tournament. Unfortunately, the only English radio channel that I read about is in Tokyo stadium so it’s Japanese all around at Osaka Bodymaker. 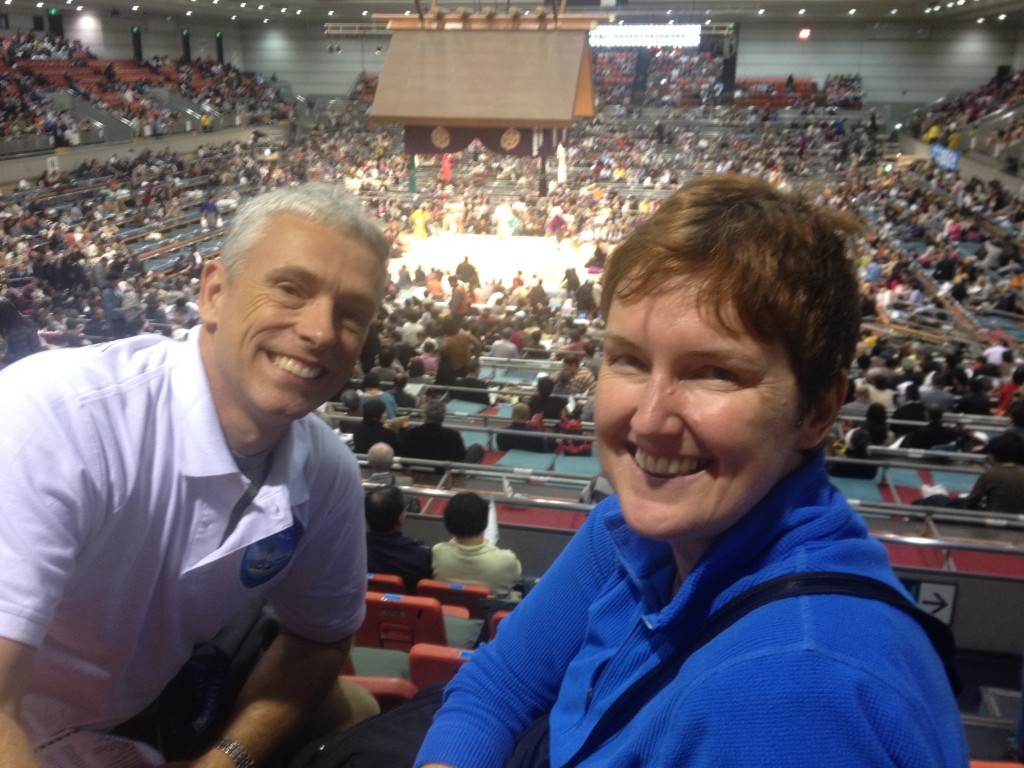 Entrepreneurs Odyssey at Sumo in Osaka

The day’s schedule begins with lesser known sumo bouts in the lower categories gradually working their way up to the final few bouts of the day between the higher ranking sumo fighters.

At the beginning, the sumo enter the arena and parade around the ring before leaving towards the other side. This takes place at each level. 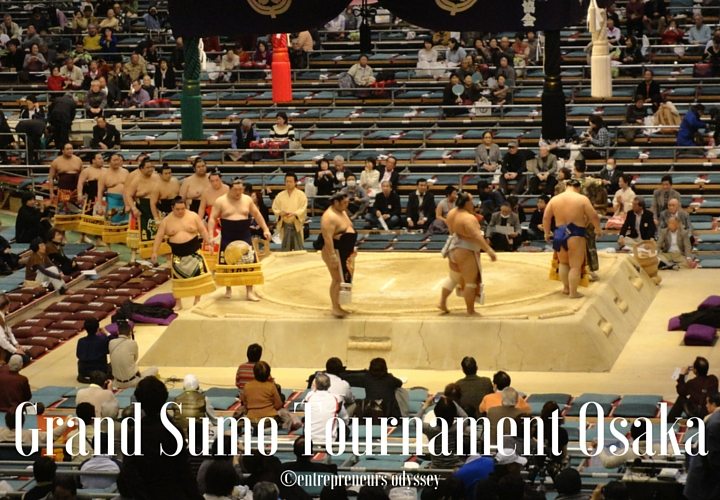 We followed the bouts on the program just by keeping up with which one was next, Moni kept the score. 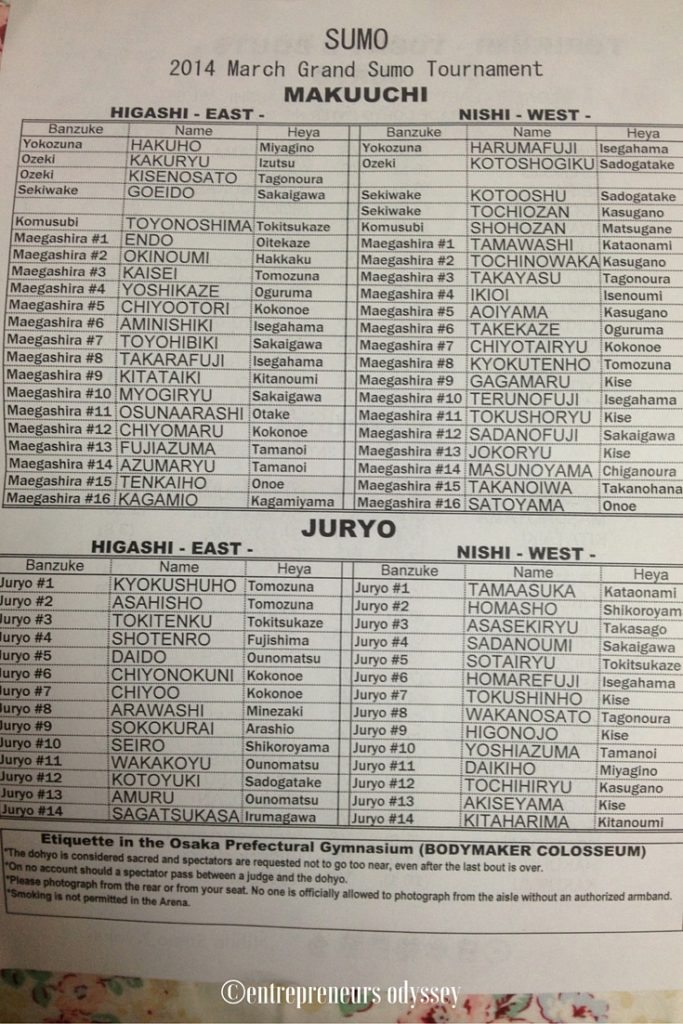 They fights and fighters are all very similar and only now and then did the crowd get excited. Until the final few bouts that were, then the crowd really made some noise.

The more revered of the sumo men spend a lot of time in the ring psyching each other out before the bout actually takes place. Also, the more known fighters have pre-fight advertising (or something like that) paraded around the ring. The whole event can take about ten minutes or more, with the actual fight in the ring lasting maybe just a few seconds.

Both fighters throw salt into the ring and slap themselves many times before the action happens, it’s much more a ceremony than just a fight. 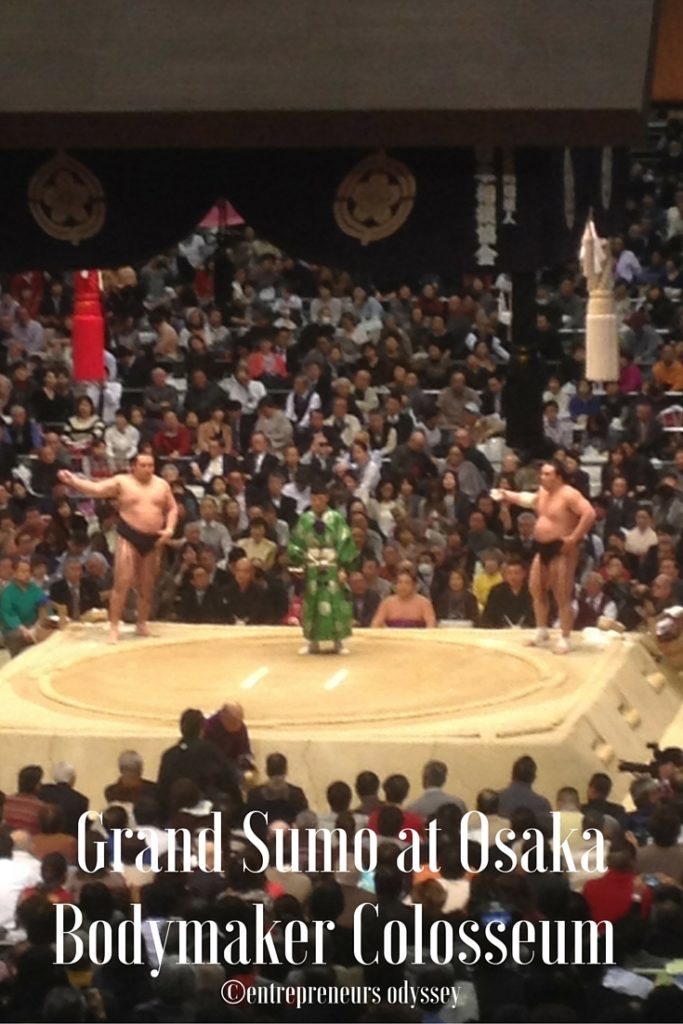 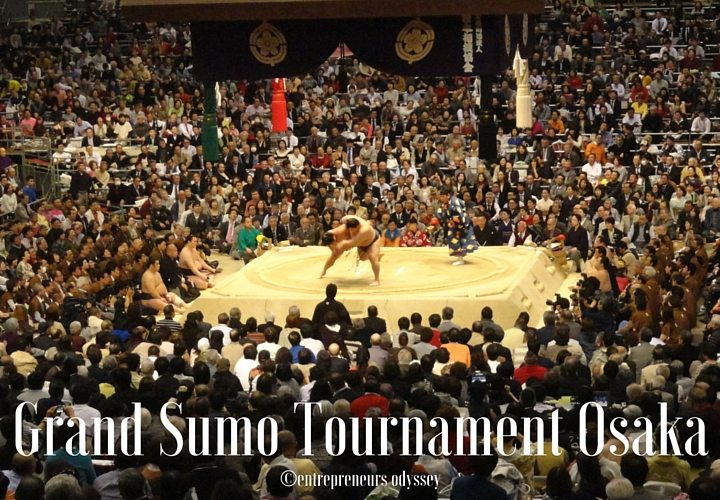 The bout second to last lasted nearly 8 minutes between ‘Hakuho’ a Yokozuna (top level) and ‘Kisenosato’ a Ozeki (second level).

Then the final bout was between another Yokozuna ‘Harumafuji’ and another Ozeki fighter called ‘Kakuryu’. In this bout, the Yokozuna lost which is a rare event. As a result, the crowd started to throw the seat cushions into the ring… A spectacle to see. 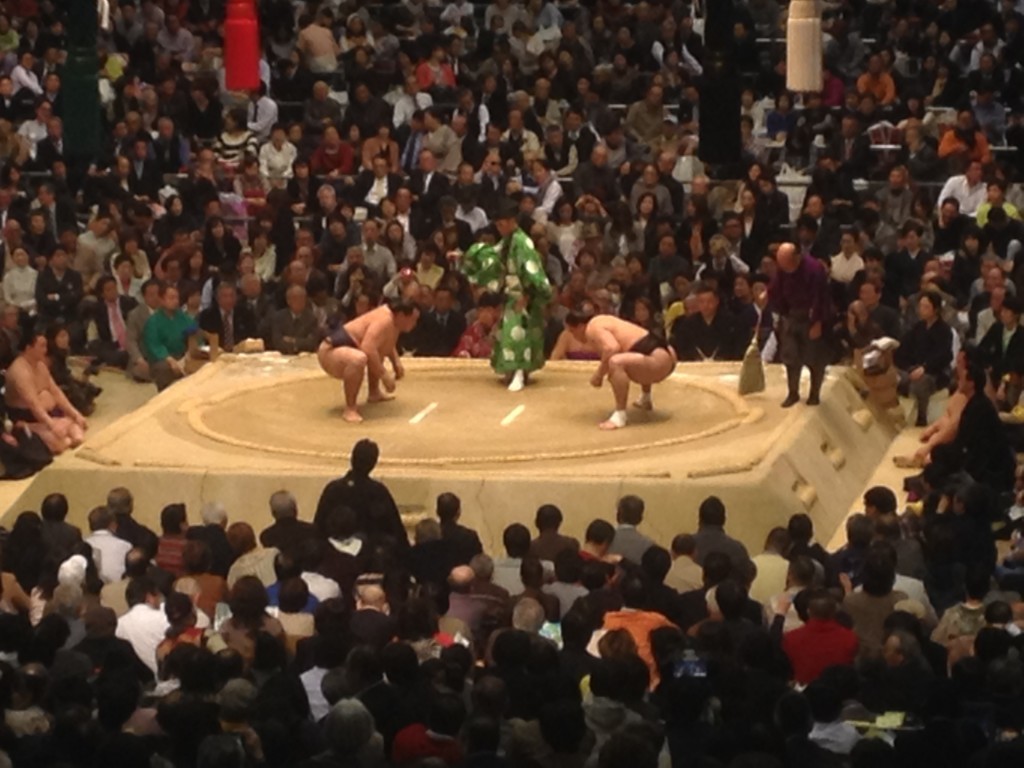 The final sumo bout on day 12 in Osaka

That was that… An end ceremony was performed by a sumo in which he had a long stick which he spun around with precision and that concluded the day’s events. The ring is then covered and everybody leaves. We made our way out along with the hoards of people all in quite an orderly manner. Back to the train and off home. 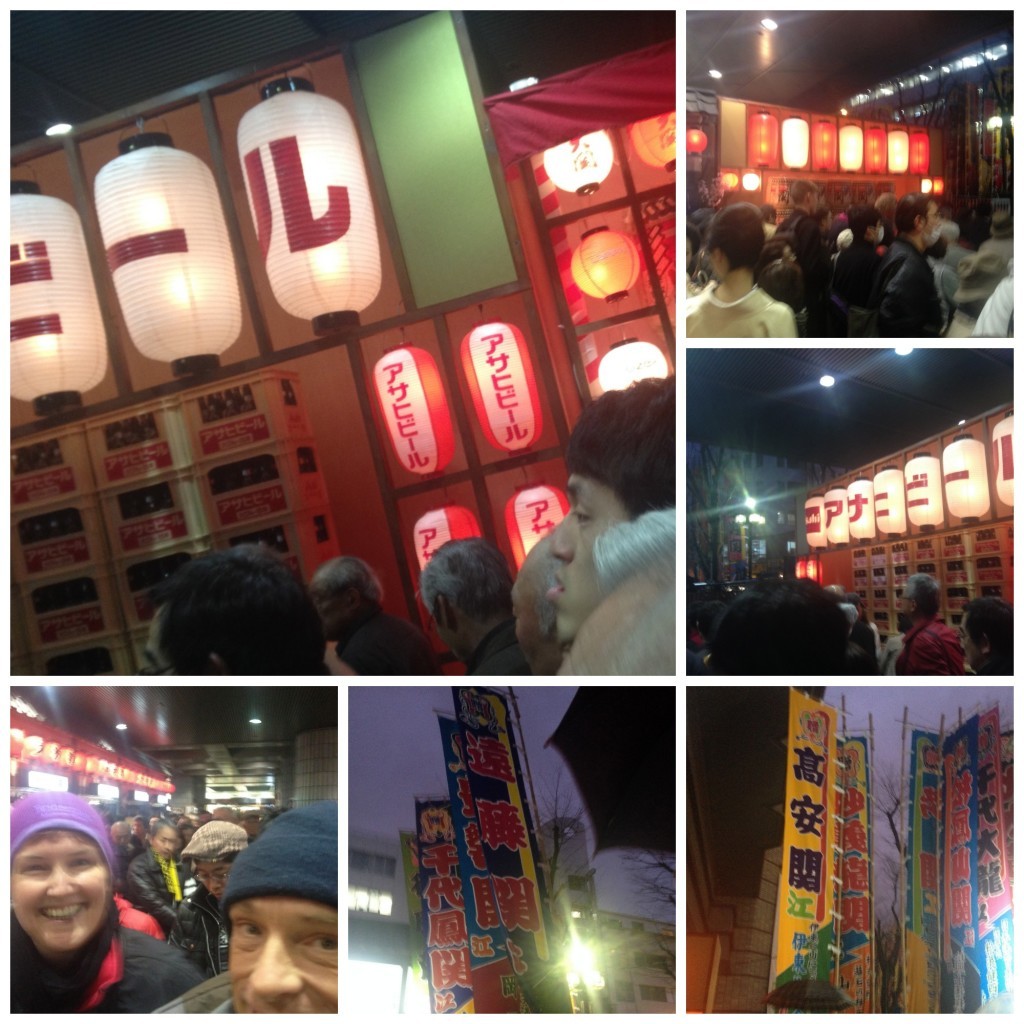 Update added 24th March… The final score from the March Grand Sumo Tournament is that Kakuryu who defeated the Yokozuna in the bout which we saw has one the competition and subsequently been promoted to the title of Yokozuna which in Japan is a very prestigious honour. He is pictured on the left in the final bout photo above.