Today we had a long road trip. First up was a visit to Londonderry or is it, Derry!

Our main objective was to see the famous Derry city walls. Having parked the car in a shopping centre garage a lovely lady walked us to the exit for the walls. Before the walk, we fuelled up with coffee and a light snack at a cafe.

What is it, Derry or Londonderry?

The prefix “London” was added in 1613 after the town received a royal charter. This didn’t sit well with certain groups of people and even today you can see some of the road signs to Londonderry with the name London having been whited out. (didn’t manage to snap a photo) still a point of contention between Loyalists and Republicans.

The city has over the years been a place of much violence, none more than the events on 30th January 1972, known today as Bloody Sunday or the Bogside Massacre. Even though times have changed and the area become peaceful, it’s understandable that some residents have not forgotten their not-so-distant past.

This statue at a roundabout as you enter the city is meant to be a symbol bridging the divide between the two communities, each side reaching out to the other forging peace between Protestants & Catholics. 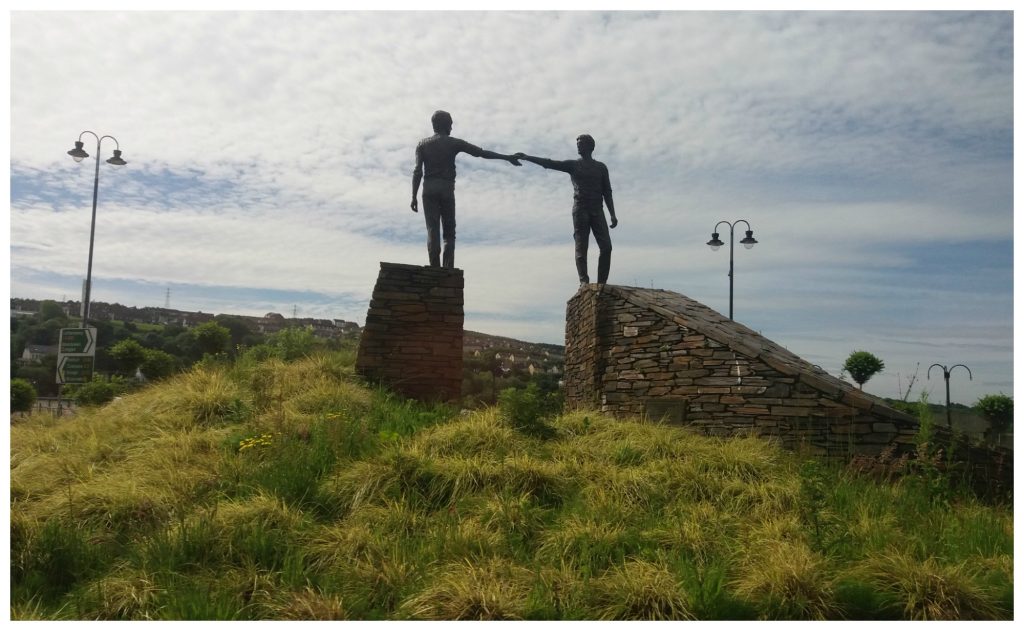 Symbol of peace between Catholic and Protestant communities

History tells us that Protestants lived inside the city walls and Catholics were confined to the outskirts. How it is today I’m not exactly sure. Visible remains like murals and slogans can be clearly seen but thankfully it has been peaceful in recent years.

This cannon is aimed at the Catholic Bogside neighbourhood from the height of the city walls. Historically, Protestants lived inside the city walls while Catholics were confined to slums on their outskirts. The fort remains a symbol of oppression, its black walls, painted with slogans still loom menacingly over the houses.

Derry is the only remaining completely walled city in Ireland. It is known to be one of the finest of the few walled cities of Europe. It is a fine example of the craftsmanship from the 17th century with the walls being constructed during 1613-1618.

First, a small walk down the road turn left and up towards the Millennium Forum there take another left and begin the climb up the city walls. The photo below left shows the wall beginning to incline.

Buildings near the city walls of Derry

The Walls, which are walkable all around the inner city are approximately 1.5km in circumference. At many points, you have a view over the outer city and of the original town with its Renaissance Style layout.

The walls are built between 12 and 35 feet wide as you can see above and below. 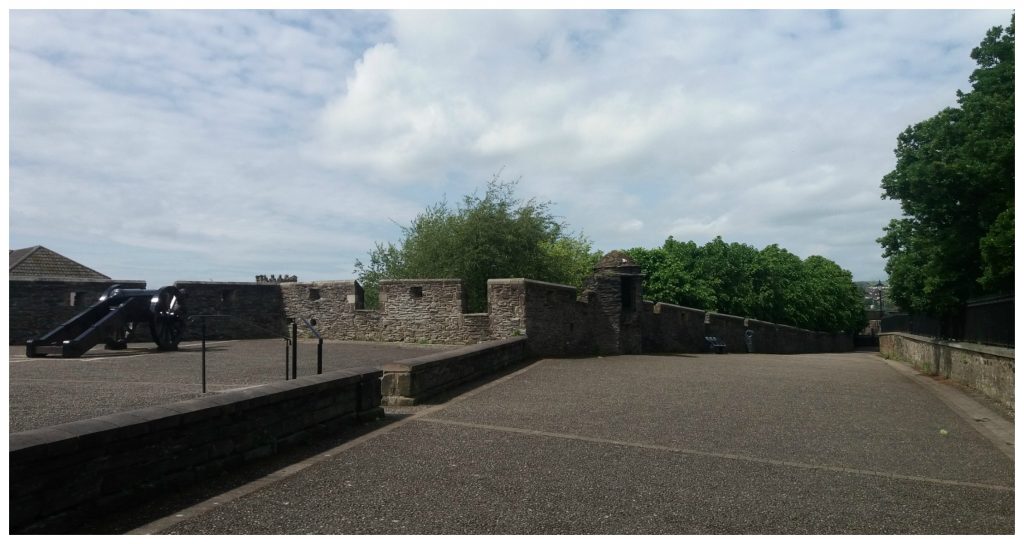 The walls of Derry, N.Ireland

Below you can see how the wall divides the outer and inner town. 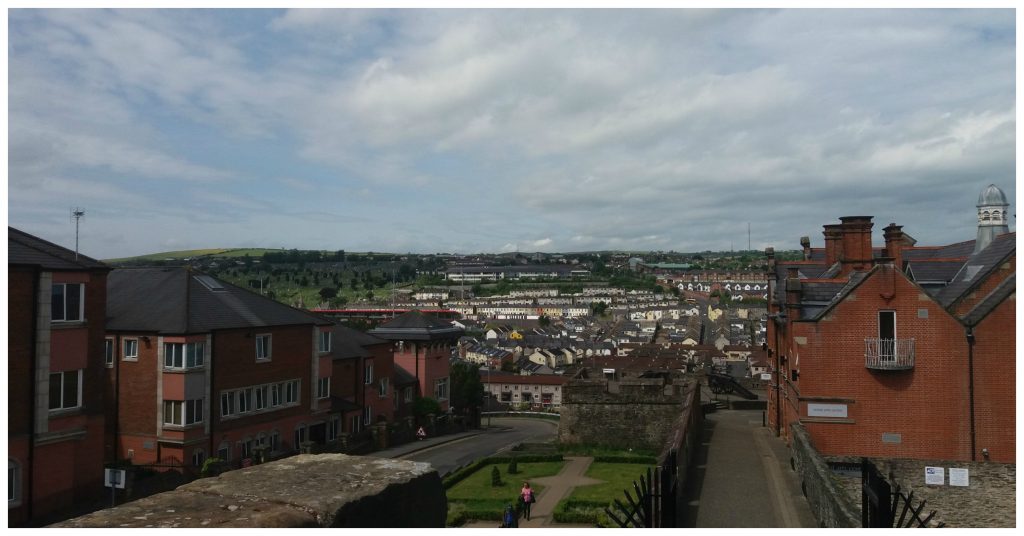 Homes close to the walls of Londonderry

The walls are made up of seven gates, four original gates are Bishop’s Gate, Ferryquay Gate, Butcher Gate and Shipquay Gate, and at some stage, three more gates were added – magazine Gate, Castle Gate and New Gate.

As you walk around you will notice the circular plates on the floor at each gate.

Along the walls, you can also find 24 original canons all restored to immaculate condition. They make up the largest collection of canons in Europe and each one has a plaque identifying where it originated.

At certain points, you have a great view of the outer city. Some murals and inscriptions of the IRA are still quite visible here and there, a clear reminder of the troubled times of the past. 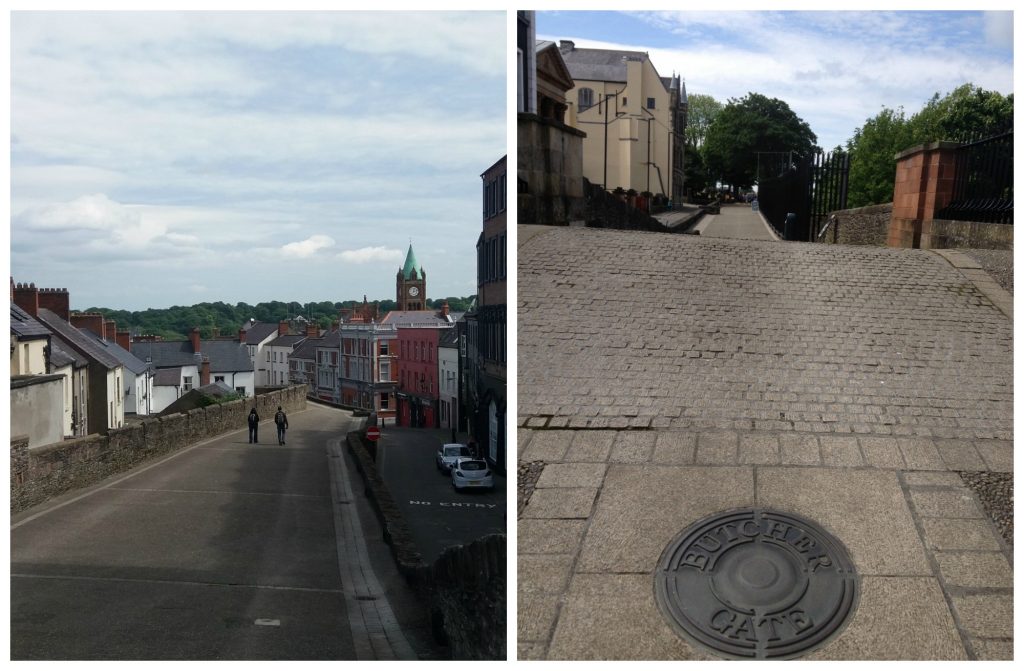 The walk around the walls of Derry

There are some very fine buildings to look at as you walk around if you have the time. 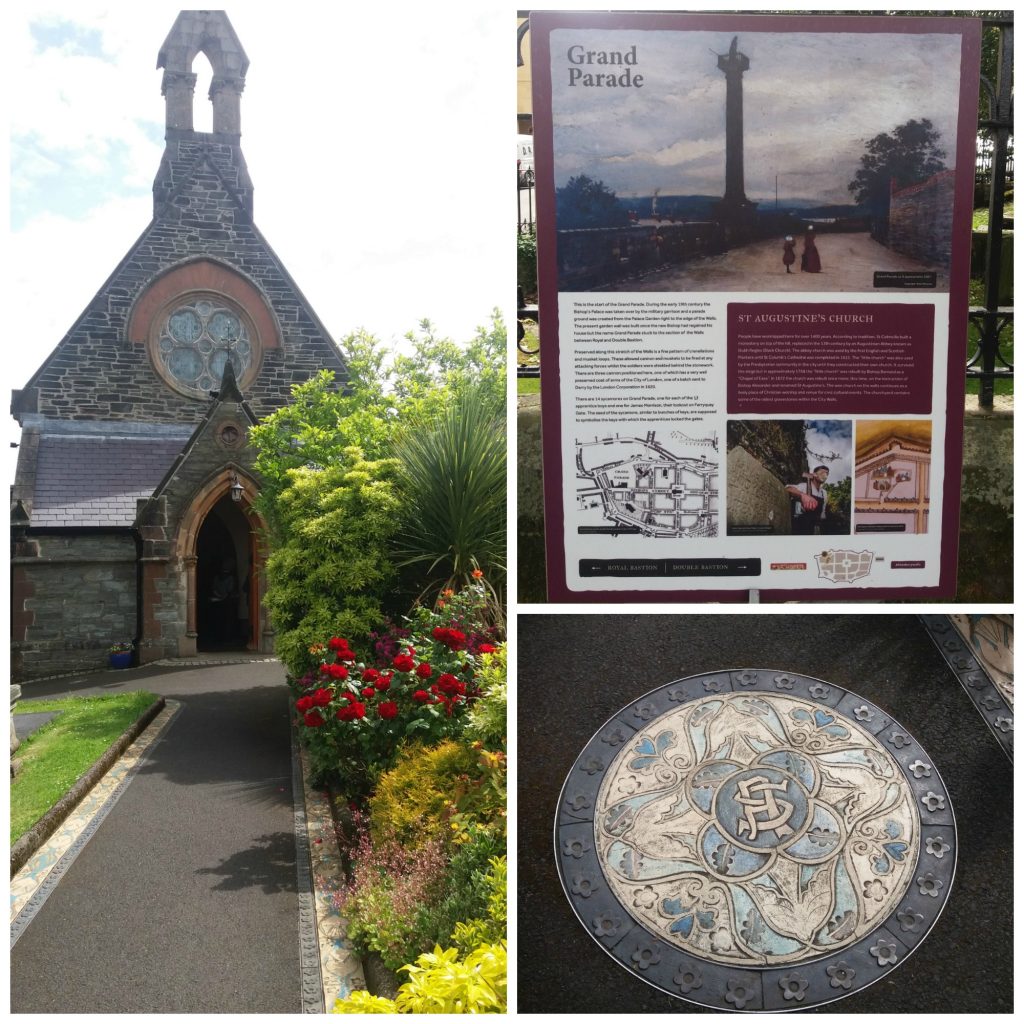 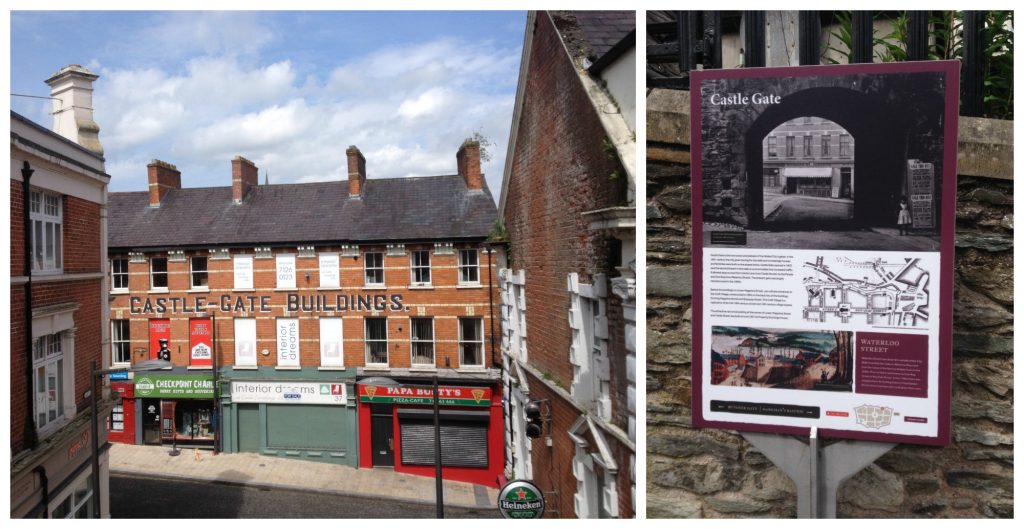 Along the walk near the Tower Museum & Guildhall are a long line of canons.

The Tower Museum at the walls of Derry

We came down from the walls and made our way towards the Peace Bridge. 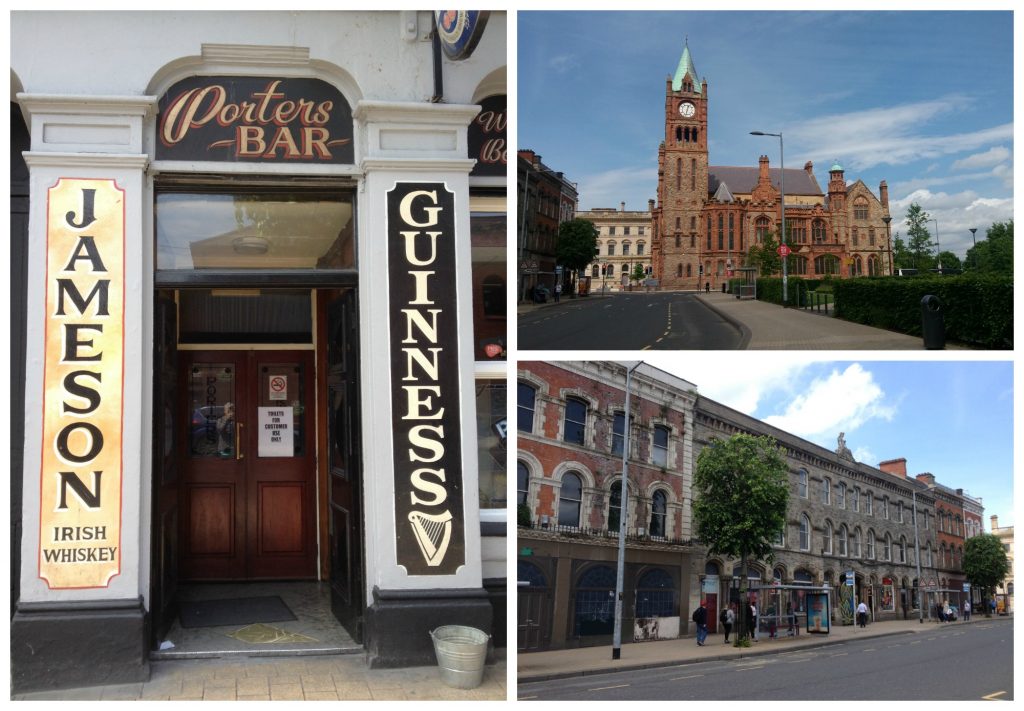 Walking back towards the Guild Hall (looks like a church) along the road past some old style buildings and a bar with two Irish icons Jameson & Guinness. At the green area slightly to the right, you’ll find the Peace Flame.

It is hard to see that it is lit during the daylight, but it is. 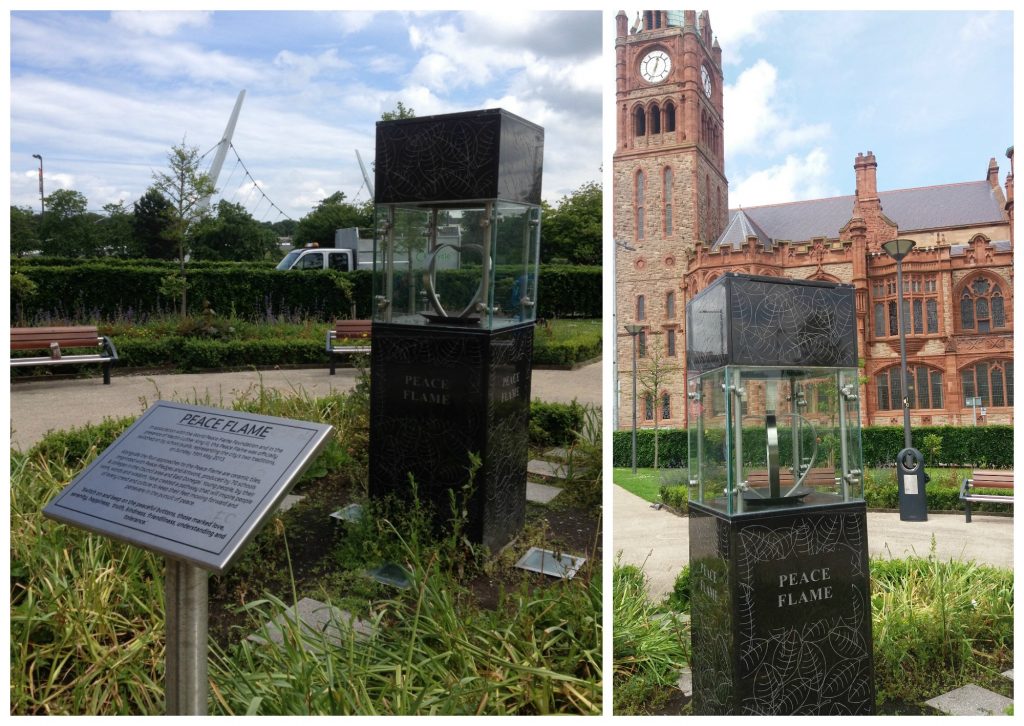 From here you can see the Peace Bridge and cross the road to it. This is the view from this side…

The Peace Bridge in Derry

and this from the other looking back.

That was all we had time for on this visit to Londonderry. A place that deserves more time to really do it justice and explore in much more detail. We had wonderful weather and enjoyed our fleeting visit.

Our road trip continues onto the Giants Causeway and along the Antrim Coast. One of the worlds top five most spectacular drives, not sure by whom, but hey we’ll give it a go…