Taking the eight hour journey on the Amtrak Cascades train from Vancouver Canada to Portland USA.

We had a pretty good nights sleep considering how hot it was and were up nice and early ready to check out and get our taxi which we pre ordered last night.

“The Ambassador hotel in Vancouver”

The Ambassador Hotel is really a basic place, check-in was easy and we paid upfront and ordered a taxi for the early morning.

Our room was on the second floor and I had to carry all the bags up the stairs as there is no lift in the hotel. As soon as you leave the front desk area an immense heat hits you, it’s as if only the entrance of the hotel is air conditioned and I was right, the rooms only have ceilling fans in. 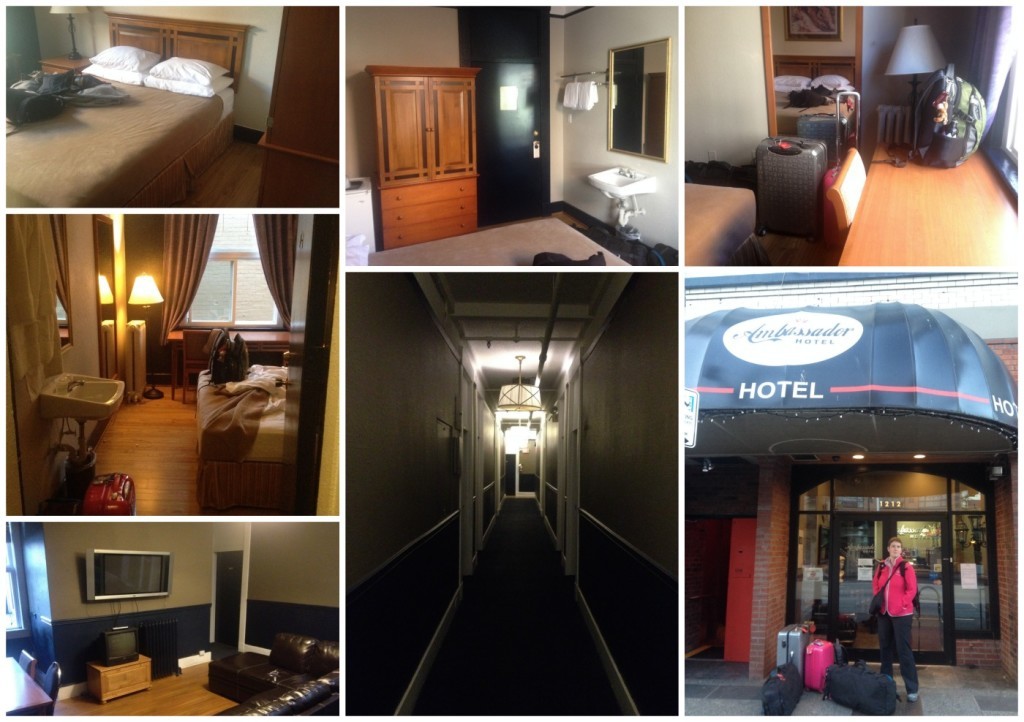 The Ambassador hotel in Vancouver

Our room was like a bake house even with the window open it would take some time to cool down.

We have a small hand basin in the room, a TV, desk and small fridge. At the end of the corridor are two showers and two toilets. I’m glad we are only staying the one night. Funny thing is, that this Ambassador hotel is almost opposite the HI Hostel where we stayed for our first few days in Vancouver before taking an Alaskan cruise from Canada Place.

Outside we waited for our taxi, and waited, watching taxi’s zoom by. I guess our taxi is not coming so we just took the next available one to the train station.

The station was not too busy and we filled out our exit forms for customs and proceed to the passport control. We were greeted with a… “Passports” in a gruff voice, sipping on his coffee, he asked a few questions very direct and waved us on our way.

That would have to be one of the most abrupt customs officer so far, he looked like Stallone, and had no people skills but very thorough. We put our luggage through the X-ray machine and they just fall off the other end if you’re not quick enough to get them.

A short walk to the train and the luggage carriage where they weigh your bags, we had one that was just over 50lbs and I was told to take something out, how f..king stupid, but anyway I did it. I know why they do it for safety reasons, if he was to hurt himself because of my extra 4lbs he would no doubt file a case and try to claim compensation!! Whatever.

We take our allotted seats which are window seats opposite each other with a table between. There is another couple who share the table with us and we chat for a while during the journey with them. 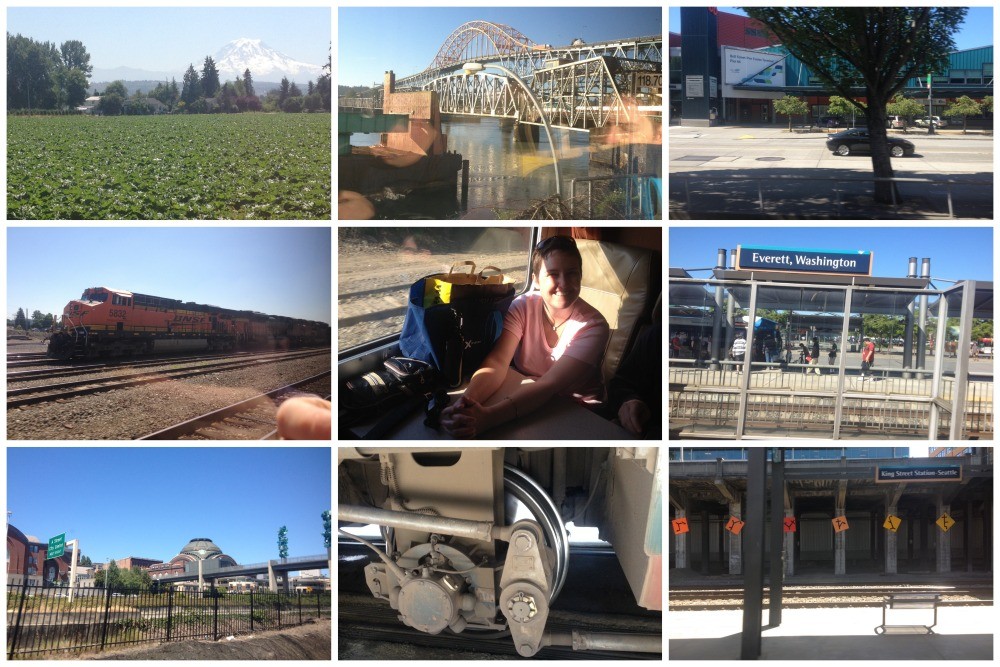 Images from the train journey

The scenery in places is very nice, and the train chugs along the tracks with the driver sounding the horn every 10 seconds, I’m not kidding either, I’m sure he was in love with that dam horn, the whole 8 hour journey he sounded it.

The train itself was comfortable, it had a dinning car where you could buy food and drinks, it also has a first class carriage if you wanted to pay the extra. 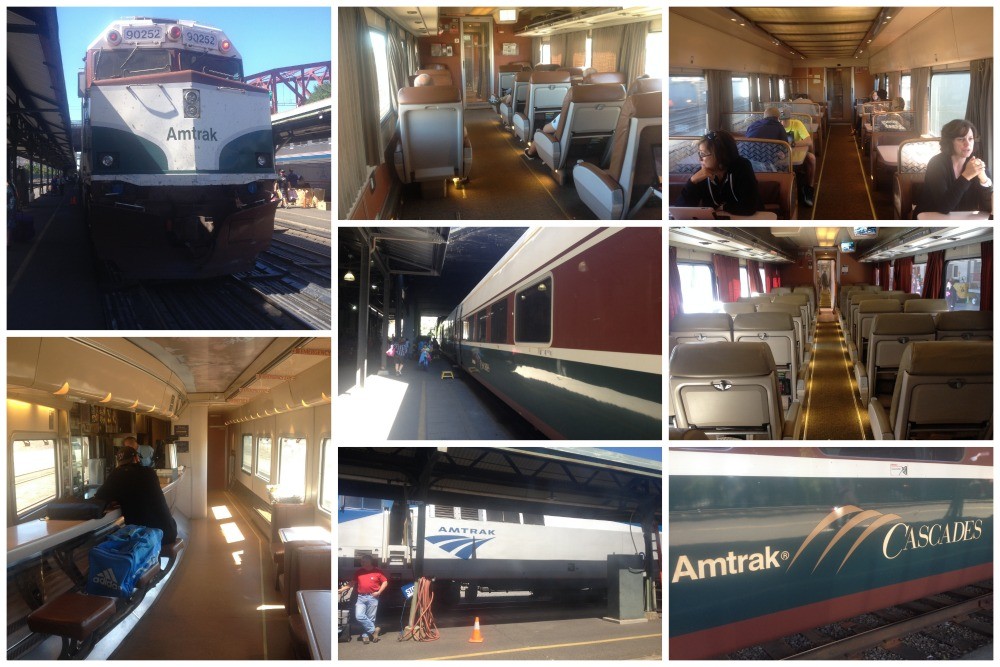 The Amtrak train pulled into Portland Union station on time and we waited to collect our luggage inside the station. Portland Union Station is very nice in it’s decor, which I believe to be original. 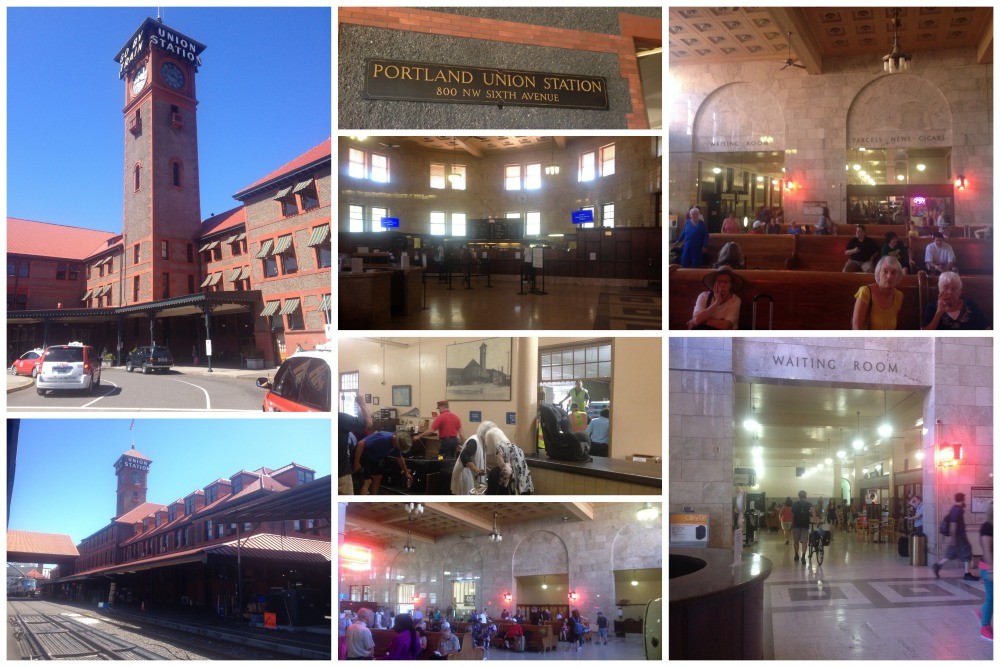 With all our luggage we grab a taxi to our accommodation, the Heathman Hotel in Downtown Portland. It’s not far away and we are soon checking in and getting access to our room for the next few nights.