We were the first ship in Nassau at 7am which was pleasant, especially knowing that this place can get overrun with tourists. Anyway we had a planned to go out with Mickey & Jelena for today and see a special part of Nassau, of which I will cover in my destination Nassau post soon. 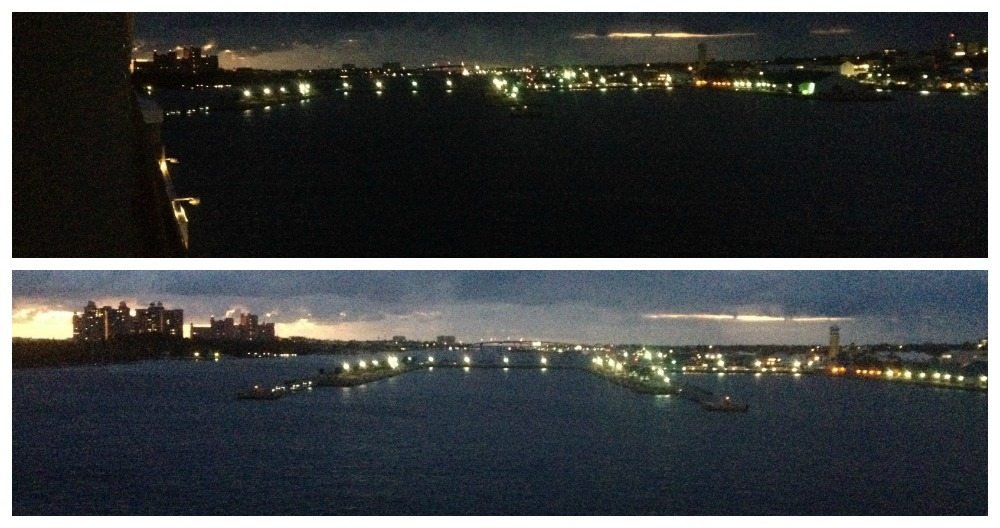 Continuing on with the cruise review though… we had both slept well which is nothing unusual for us when sleeping onboard a cruise ship. There is something wonderful about sleeping at sea, the gentle movement of the ship, the sound of the water rushing by, the fresh clean air and the soft comfortable bed with plush pillows all make to a great sleep. 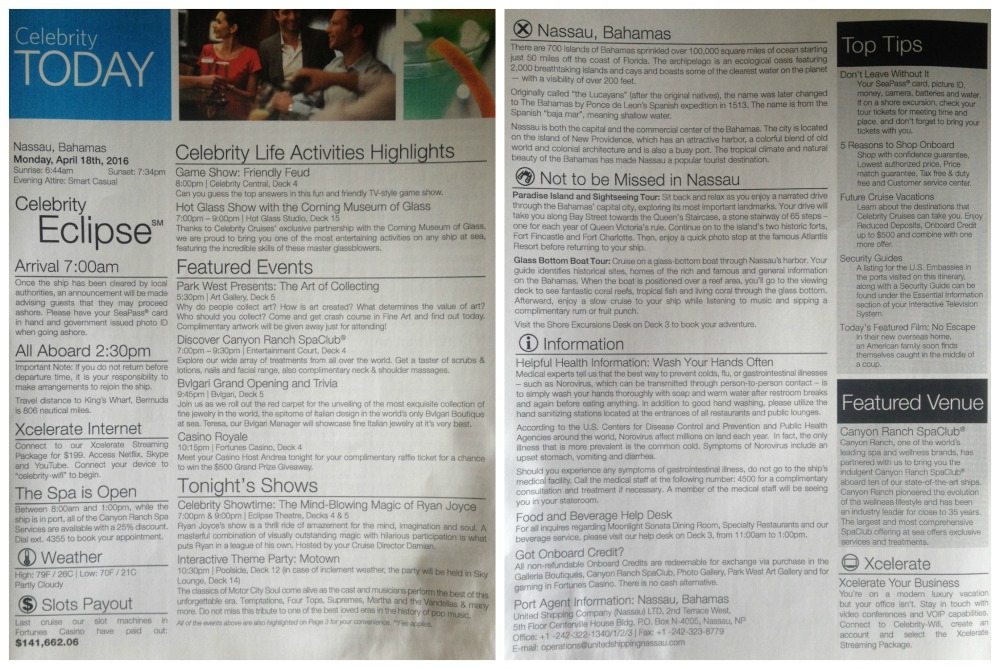 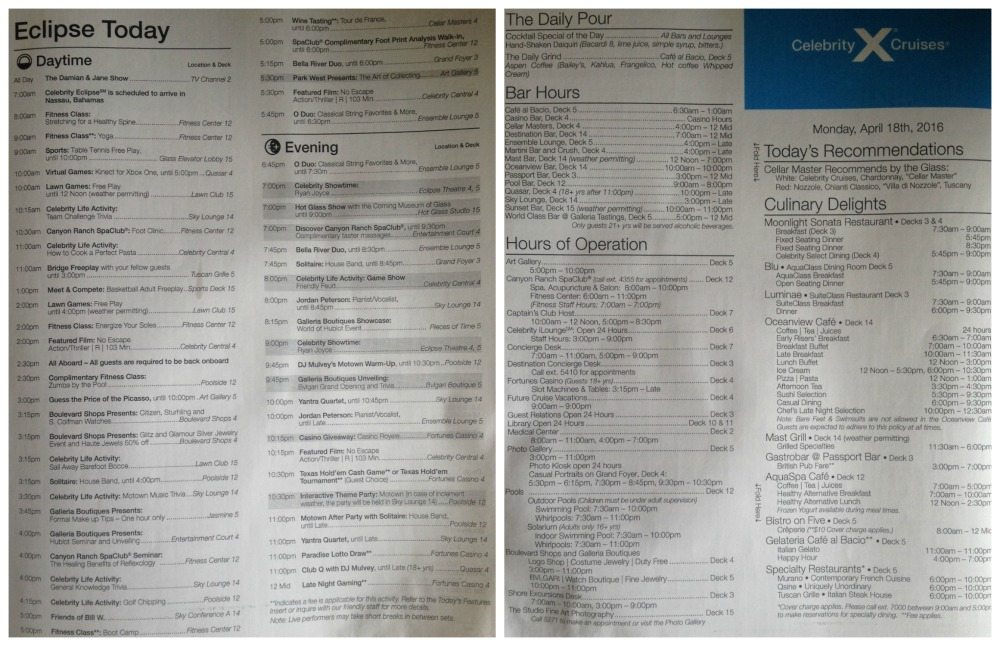 I was awake early and watched us maneuver into the port of Nassau in the dark. Last time we arrived here it was around midday and we were the fifth ship in and also the largest vessel, taking up the outer pier. Today we also docked alongside the outer pier, not sure if we’d be the biggest ship or not, as it happens we were. After us came only two Carnival ships, a quiet day for Nassau with only around 7000 passengers visiting.

I’d ordered room service breakfast for this morning so that we could stay in the cabin and enjoy the sail into Nassau. The phone rang to let us know that the breakfast was on its way, and about a minute later there was a knock at the door and our room service had arrived. 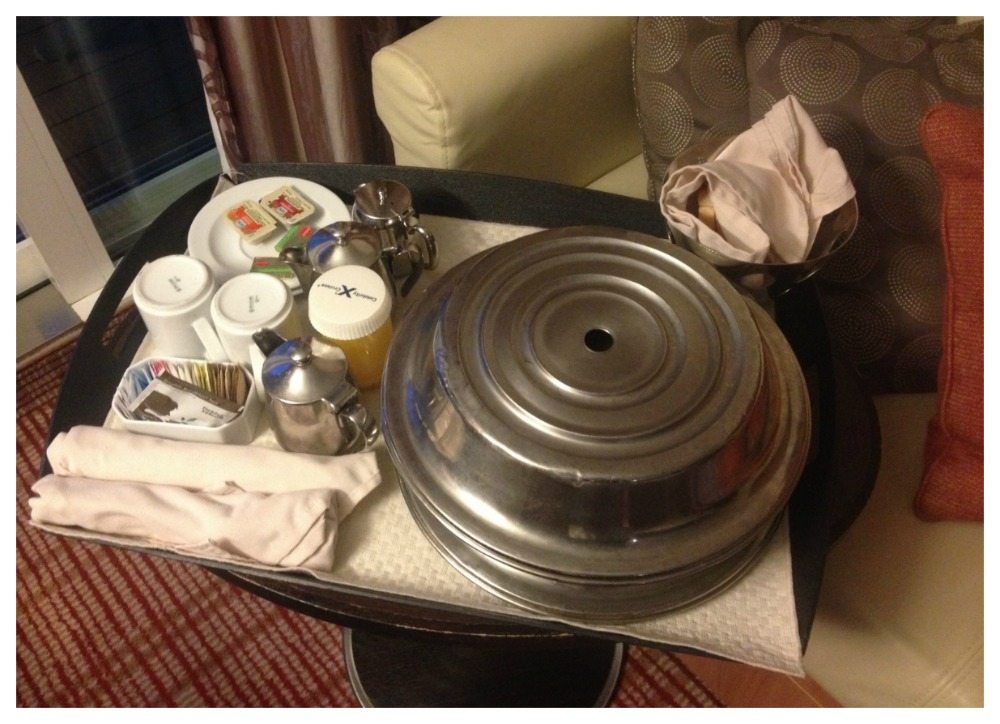 Not a minute early or late, and we were enjoying our order. The room service menu is better than many other ships by far and the best thing is, the delivery is free between 6am and 11pm. Saying that, the actual food can be a bit hit n miss.

Our order was interpreted slightly different than ordered, but no worries. The toast was rather cold and soft which has to be the biggest challenge for any room service delivery.

Anyway, we polished off our food and enjoyed the sail in as the sun rose behind the famous Atlantis resort. 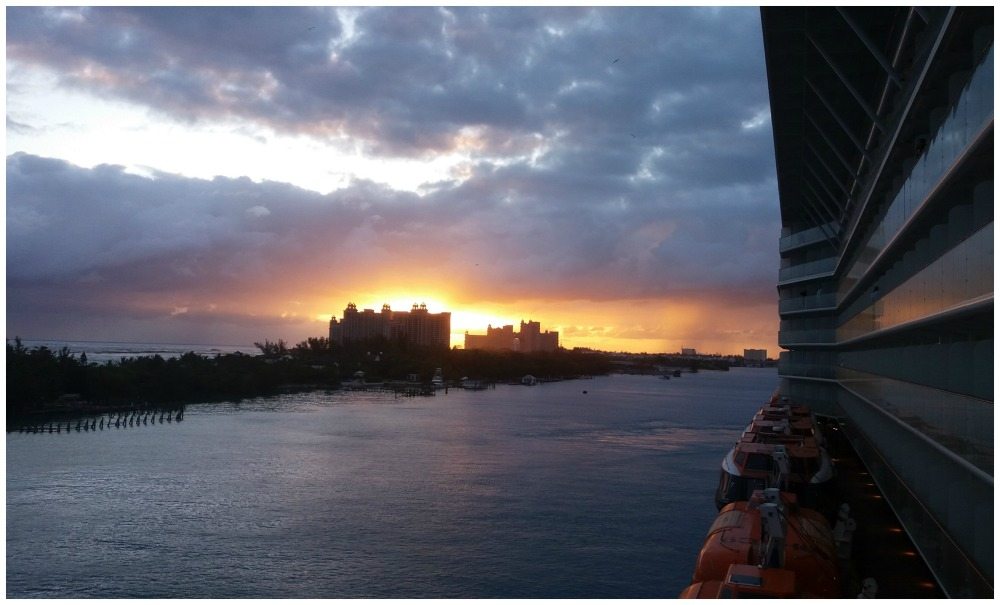 Sunrise behind Atlantis resort in Nassau

Breakfast top up & coffee to go

Moni took a smoothie from the AquaSpa cafe to complete her breakfast while I had some grapefruits. 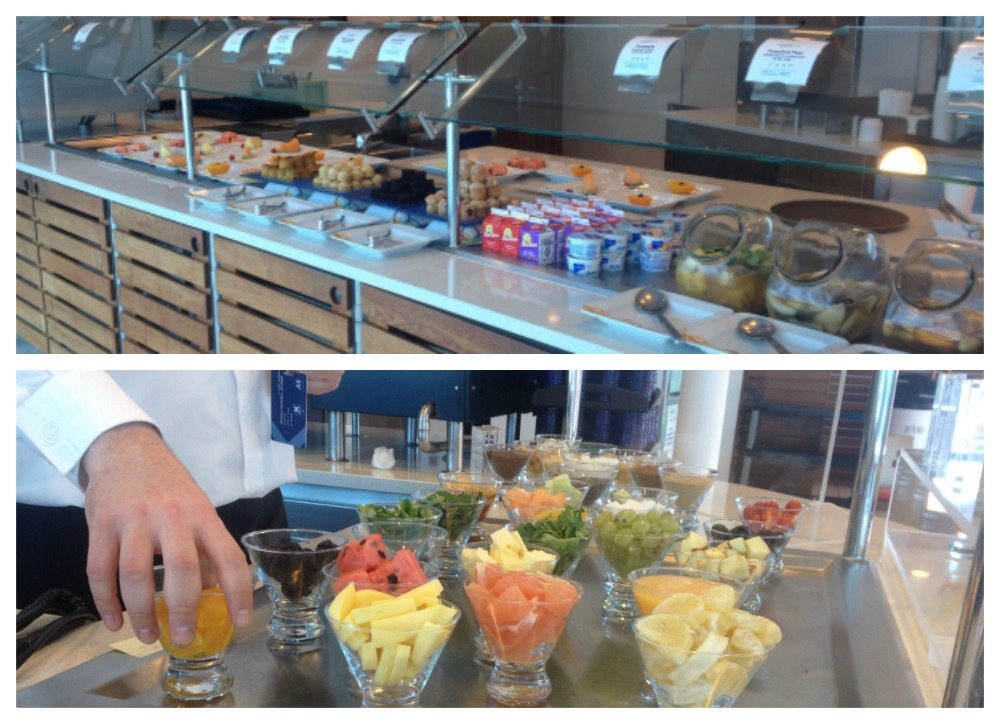 At around 9am we made our way ashore, via the café al Bacio where I got a double shot latte and some danish pastries to go… You can read about our day out in Nassau in my destination Nassau post.

Back onboard at around 1pm

We made our way to the Oceanview for lunch, and after lunch we had coffee and cake in the cafe. 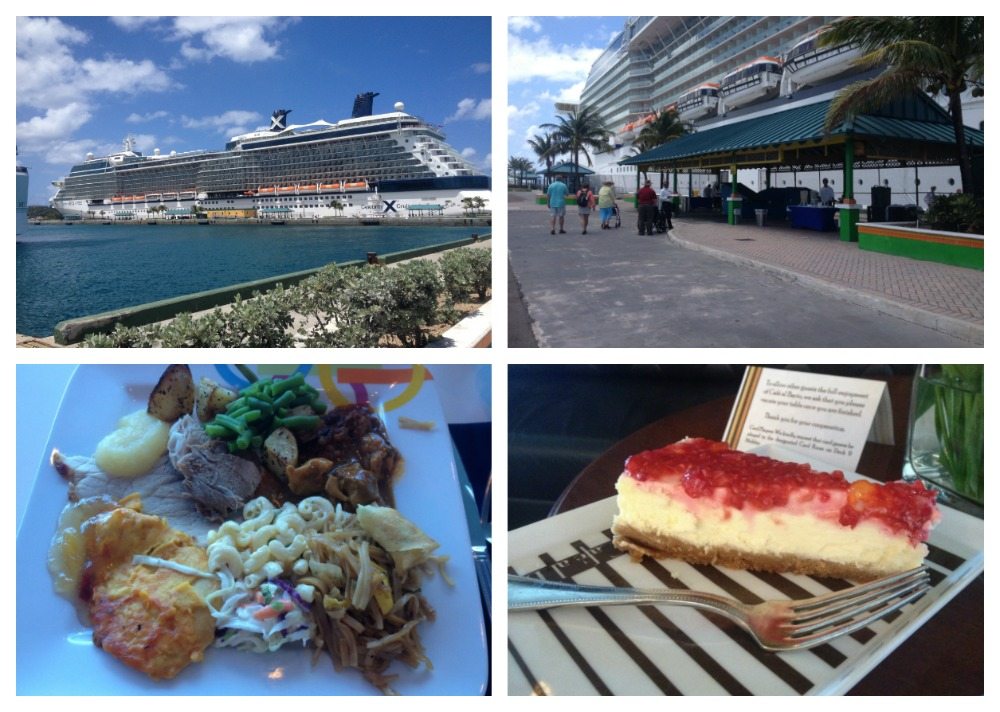 Welcome back to the ship for lunch

The Captain announced some bad news

At 2.30pm the Eclipse eased away from the dock in Nassau and then the captain announced over the PA system… Due to a severe weather system in the vicinity of Bermuda unfortunately we will not be keeping to our planned itinerary and will have to change course to avoid the bad weather hence missing out on our stop at Kings Wharf. 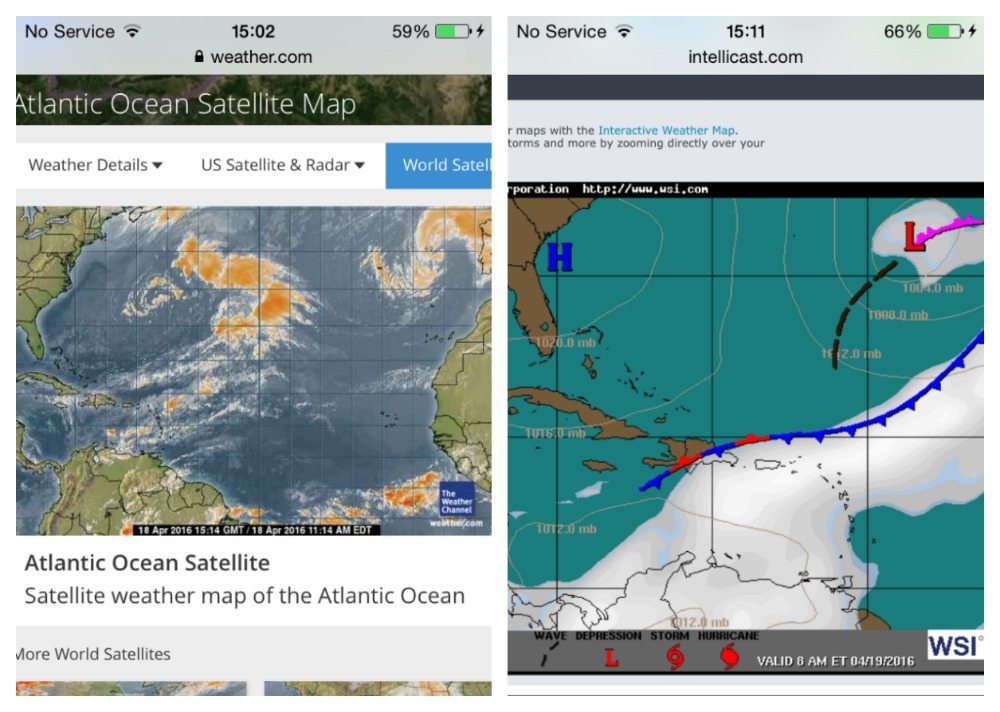 He went on to say that the most important thing for him and the crew is the safety of the passengers and the ship, which is fair enough.

For a split second we were a little disappointed that we’d miss out on Bermuda which actually was hopefully to be our highlight of the cruise, lol. Anyway, a minute later we were already over it and happily enjoying our coffee and cake.

As a rule, when an announcement like that happens, the majority of passengers would be congregating at guest relations complaining and wanting discounts wherever they could haggle them. This was not the case here, and over the next couple of days it was all forgotten, a bit like, didn’t we stop at Bermuda kinda thing.

The captain kept us up-to-date with the ships progress and the weather situation, including a full report which was aired on the stateroom TV navigation channel about the severe weather north of us. It was a very good decision to take a southerly route and avoid what was 10-15 swells and very strong winds, basically it would have become most uncomfortable and dangerous.

As a result of this change of course, we would arrive a day early in Lisbon and as an added bonus, Celebrity have added a new port stop in Le Havre which they actually market it as Paris, and the cruise excursions desk is putting together an exciting offer of tours.

Leaving Nassau in the Bahamas

The Eclipse made her way out of the protected port of Nassau under wonderful sunny blue skies. How the next few days would turn out we didn’t know. 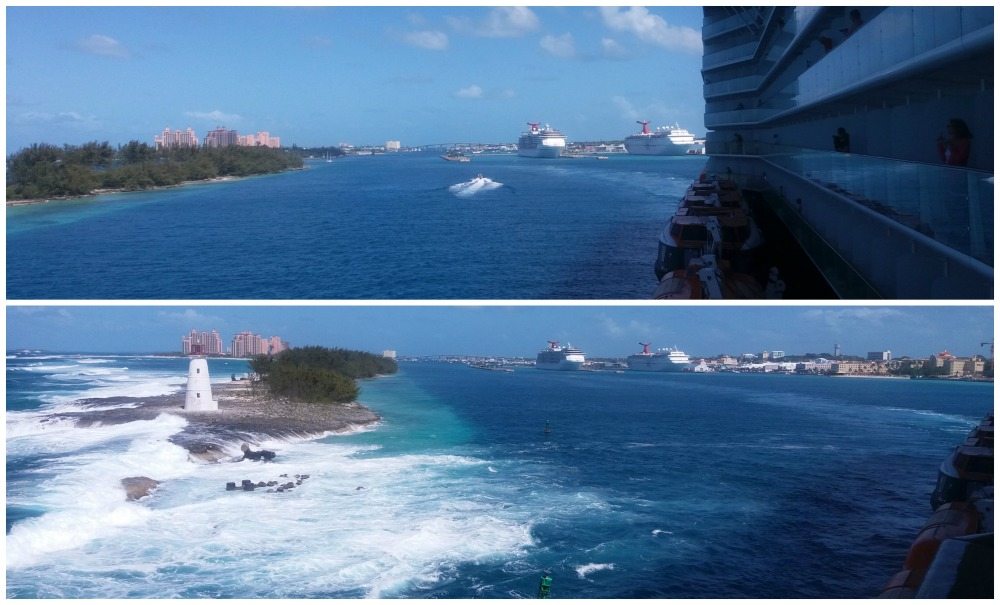 Leaving Nassau in the Bahamas

After a relaxing afternoon we got ready for dinner in the Sonata dining room. Another good tip for those traveling long-term, a pair of black shoes are always best and with that keep a good old Sharpie marker pen just incase you need a touch up…

The good old Sharpie marker pen to the rescue

Dinner in the Moonlight Sonata Restaurant

Having missed out last night we made sure we were on time, in fact we were a bit early and had to join a line of people waiting to get in. What I did notice was that a good amount of guests had glasses of wine in their hands. Not sure if they are taking them from a bar onboard or from wine which they brought onto the ship and keep in their cabin. Somehow I think the later  as you can order wines in the dining room from the sommelier. Unfortunately it has a somewhat cheap look to it. 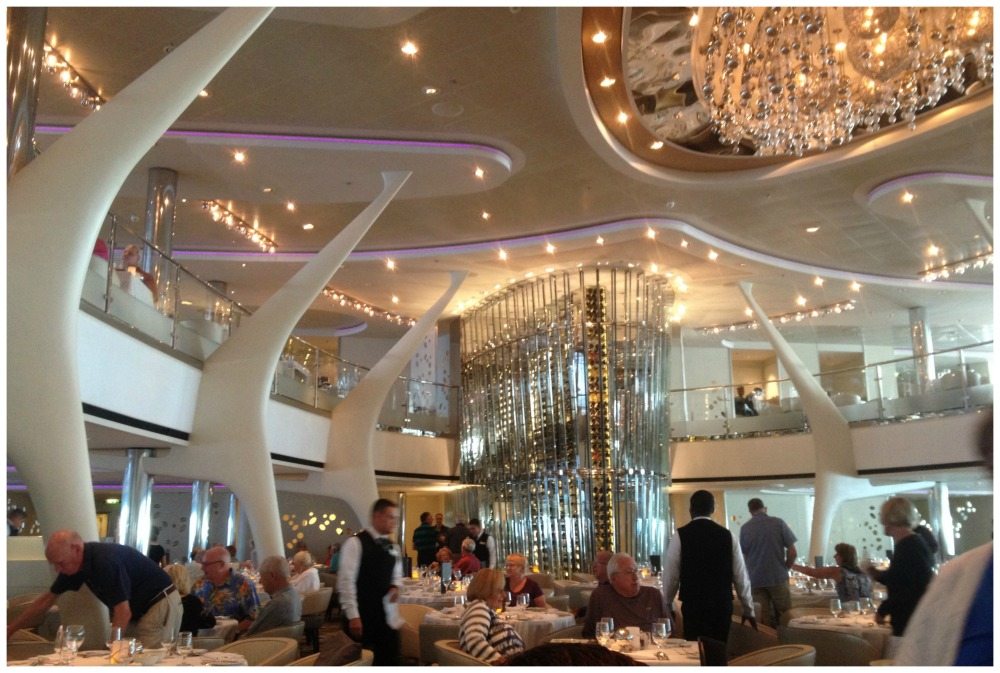 We made our way to the door and found a waiter to show us to our table obviously not knowing where it was. Being the first at the table for six we chose our seats and our waiter came and introduced himself to us along with his assistant.

The rest of the table guests joined and after introductions we all began chatting.

Tonight’s menu and our choices 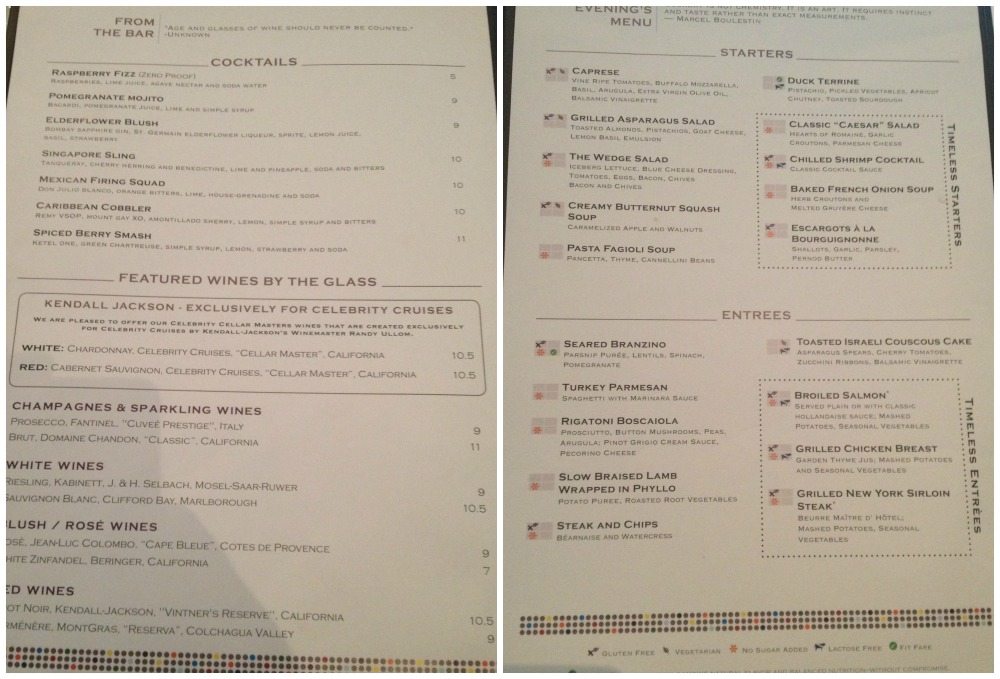 Between us we had the Caprese salad, Pasta Fagioli soup and the Chilled Asparagus salad.

Our main meals were, Toasted Israeli couscous cake and Steak and chips. Moni reported that the couscous cake was delicious, I was surprised by my steak n chips… as you can see I had 6 chips and a few slices of steak on this huge plate, it looked a bit lost, even though, it was very tasty and I could have eaten two of them. 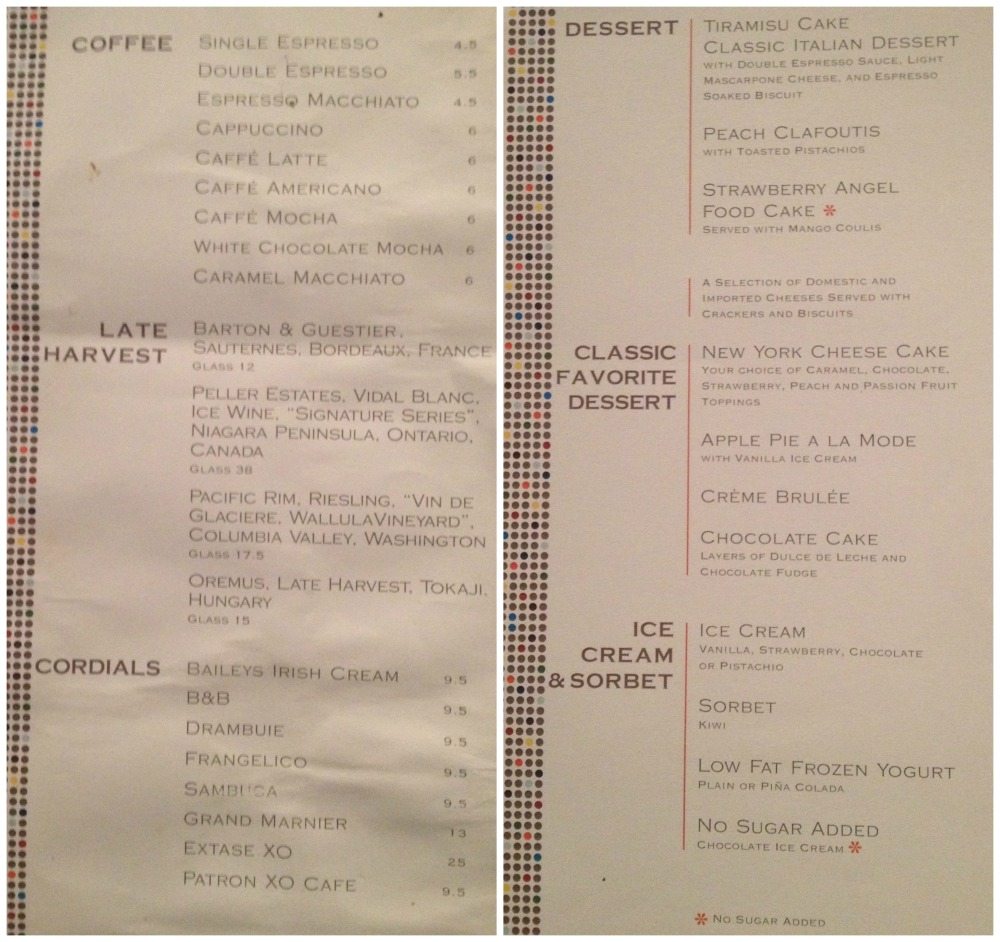 We both decided on the Tiramisu which was very nice. 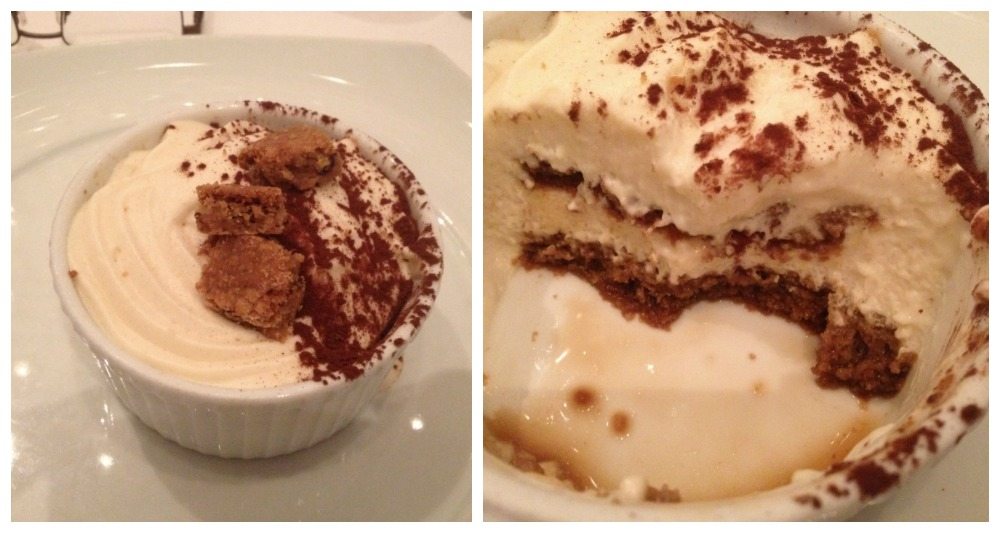 Dinner was very good and so was the service. The main topic this evening was obviously all about missing out on Bermuda and the chance to visit Paris.

We all agreed that Bermuda was the place we all had wanted to visit and that a stop in Le Havre was nothing to get excited about. The excursions to Paris were huge 9 hour trips 3 hours each way on transport with 3 hours in the city, this didn’t appeal to any of us at our table.

After dinner drinks in the Passport Bar

After dinner we had a drink in the Passport Bar which is closest to the lobby where the house band played every night. A few people were up dancing, others were heading to and from dinner, and some like us were relaxing at one of the tables. 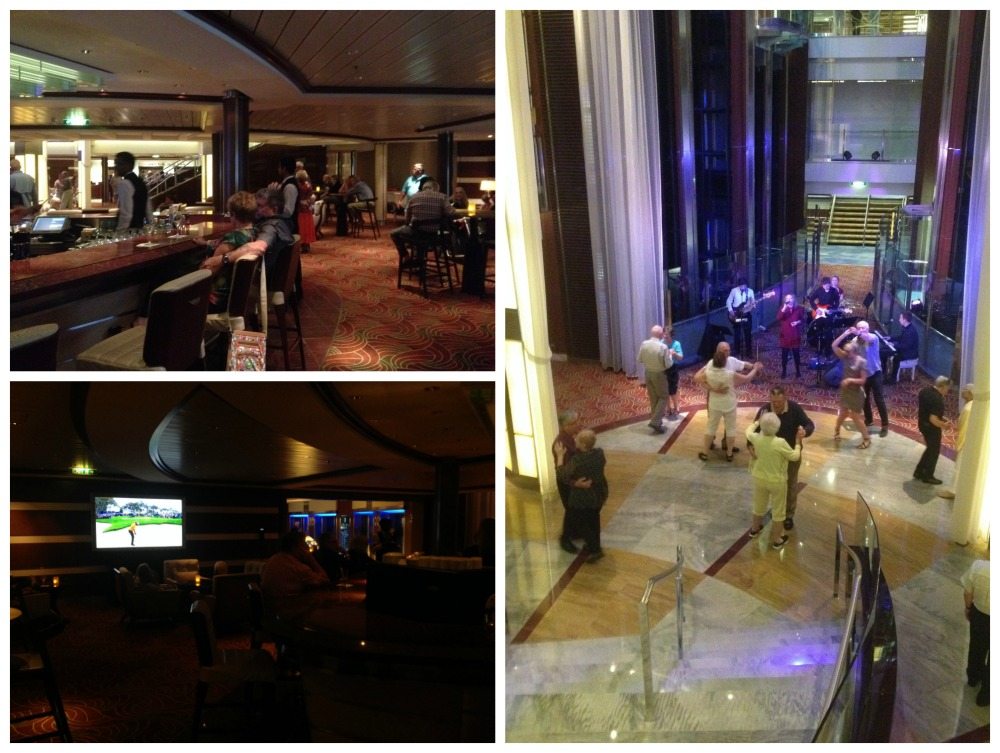 Passport Bar on the Celebrity Eclipse next to the Lobby

This is also the GastroBar where you can order (at an extra cost) typical British fare as it’s called, basically it’s items like fish n chips, bangers and mash etc.

Ryan Joyce in the theatre

The show tonight was a magician by the name of Ryan Joyce. He was very good indeed and had the crowd mesmerized with his art of sleight of hand etc. 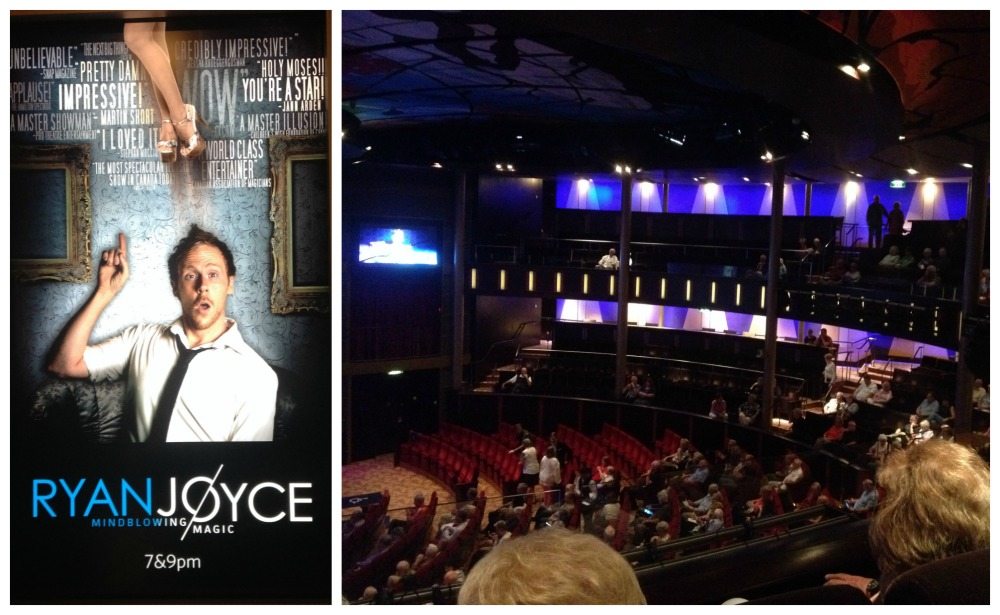 Ryan Joyce in the theatre on Celebrity Eclipse

After the show we called it a night and around 11.30pm I found myself at the buffet getting a couple of cups of tea and a slice of pizza. By now the ship was moving gently with the slight swell and the pools were splashing water everywhere. Needless to say there were not too many people around at this time of night.

Let us know in the comments below

We’d love to hear from you, tell us about your experiences on the Eclipse or any other Celebrity cruise ship that you’ve been on.

How would you rate the Solstice class ships? What’s your favourite place onboard the Eclipse? Would you book again with Celebrity?