The Cirque Du Soleil is celebrating it’s 3oth year in 2014, an awesome example of how one person’s dream can become a lifeline for thousands of performers and millions of ecstatic viewers.

Theoretically we could have seen all 30 years of Cirque Du Soleil, however this is our first time at Cirque Du Soleil and another Bucket List item being crossed off today.

Having been to Las Vegas a few times and not taken the opportunity to see a show, I mean we did see show’s just not the Cirque Du Soleil, so when our friends mentioned that Cirque Du Soleil are in town and they would like to go, what better than to take this chance and see the Cirque show.

The whole day was fabulous and that’s without the show, add the Cirque to the day and it becomes major awesome…

We had a brunch around 10.30 am all thanks to Brian as I was banned from the kitchen today. Needless to say I did enjoy it (please more). Then we drove into Vancouver, via the BC Ferry to Horseshoe Bay, and while we waited we sipped coffee’s from Bowen Island Roasting.

brunch then coffee while waiting in line for the ferry

On Vancouver we visited Carole & John at their place in the Granville area which looks out over gardens, towards the bridge. Carole had prepared some cheese and smoked salmon to begin followed by a yummy lunch, cold chicken and salad, some wine and desert of fresh home grown strawberries with some home made raspberry ice cream from Shasta. 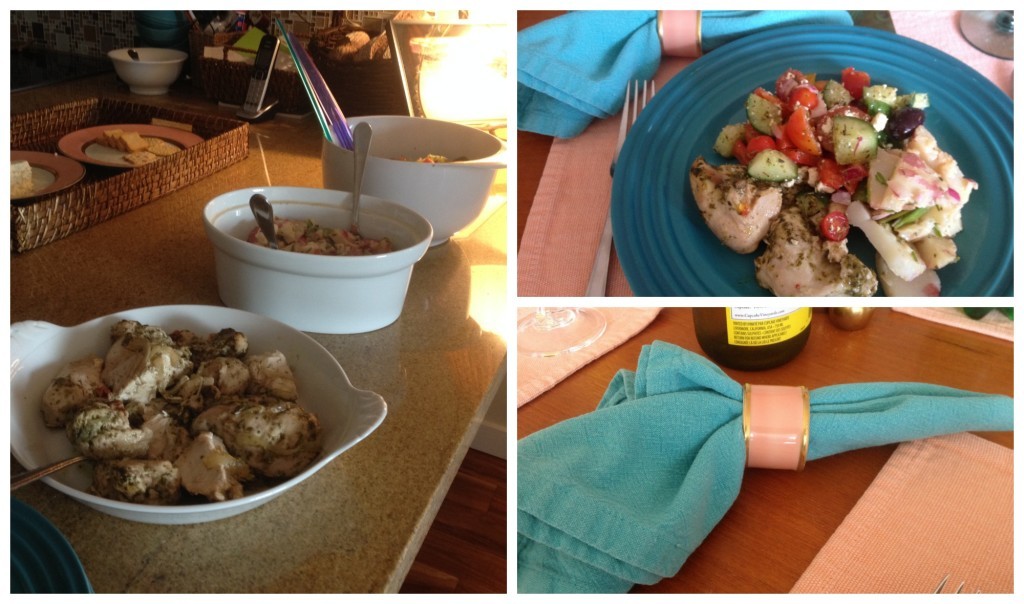 Then the short drive to the Cirque Du Soleil. The big yellow tent which is set up in what normally is a car park takes the crew 8 days to erect and 2.5 hours to dismantle!!

We make our way in and take our allotted seats. Unfortunately no photos of the show are allowed so you will just have to go and see a show, believe me it’s worth every cent of the $105 ticket.

The show goes 1 hour 45 minutes with 25 minute intermission. The Cirque Du Soleil show itself is titled TOTEM and is an evolution theme, from where we came, ape or space? For those back in Australia it begins downunder in October, so check out the link above for dates & tickets. 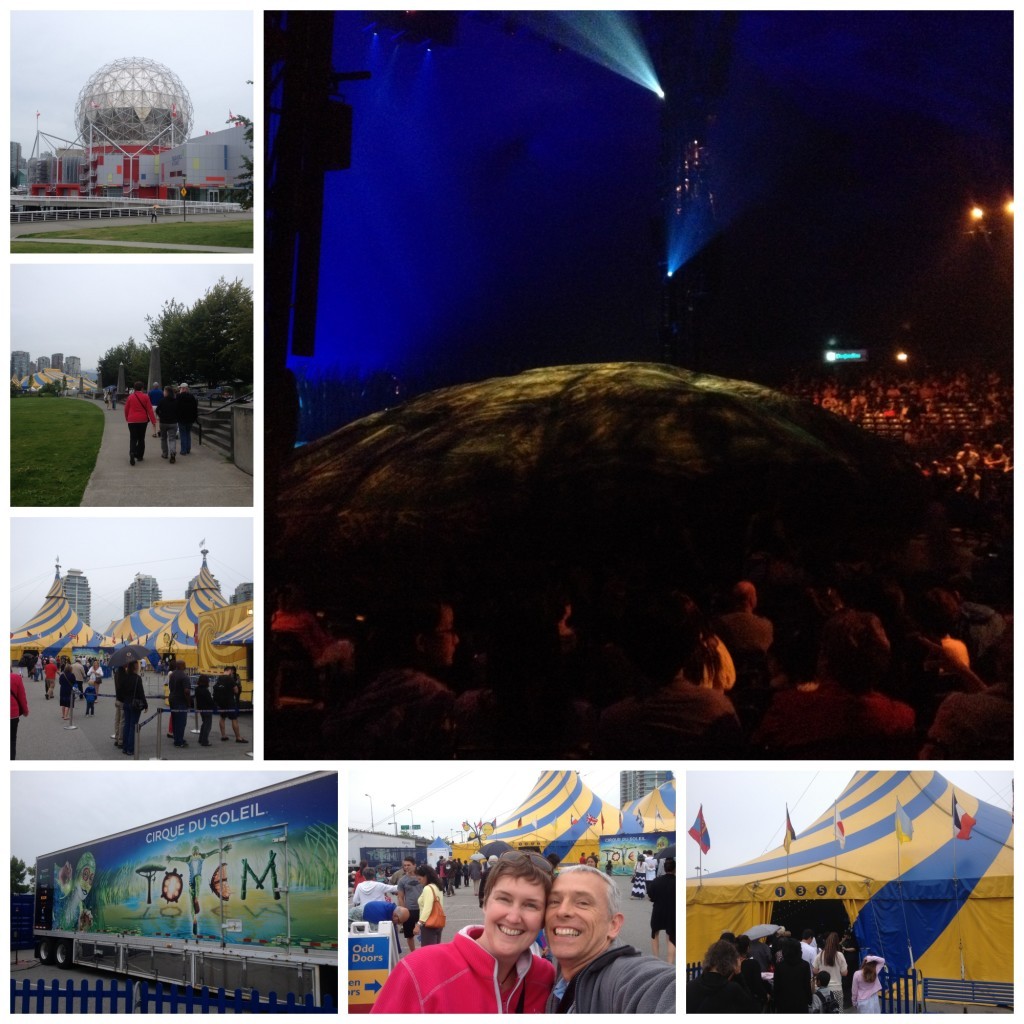 Cirque Du Soleil images, only one photo from inside before the show

A large turtle shape is at the front of the stage where the act begins, the shell opens and out come the creatures. The mirror-man is slowly lowered from above doing spins etc.

The agility of the performers was quite incredible, from parallel bars to trampoline, then asian ladies on bikes that balanced metal bowls on their heads and threw then with their feet and caught each bowl on their head just amazing.

The show keeps going from scene to scene with awesome music that really tied the acts together. Great use of images projected on to the stage were setting the stage as to what was the background, be it the beach, bubbling volcanoes, jungle fever and so on.

I’m not sure if you know so I’ll write it anyway, the Cirque Du Soleil don’t use or have animals in their show, everything is performed by humans.

Like I have said, no photos are allowed inside and there are security around that will tell you to put the phone or camera away. So just go and see one live you won’t regret it.

On the way home we were treated to a fine dinner at Shasta & Brian’s favourite Vietnamese restaurant, even though the guy’s wanted to pay we had a battle for it, lol. 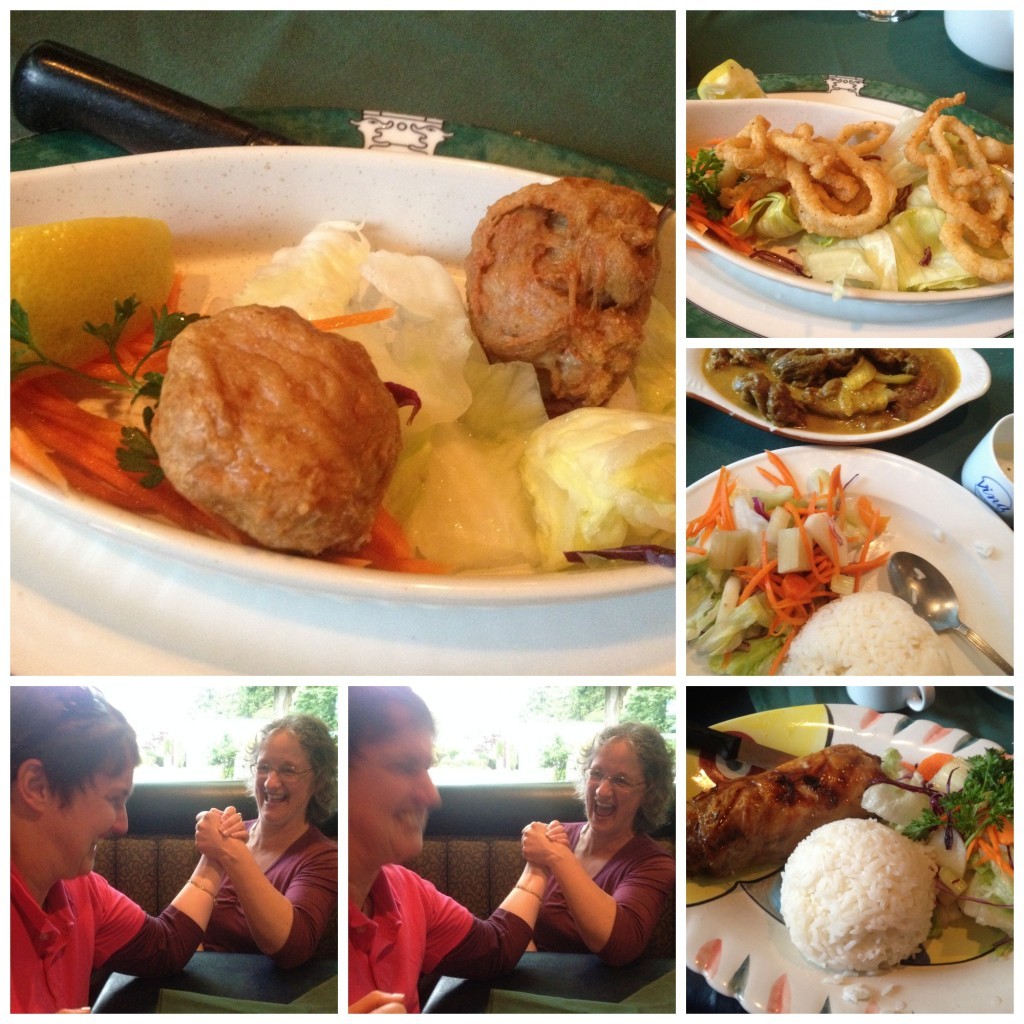 A great end to an awesome day, again. Life is good.