This morning we are cruising into Venice but fog delays our debarkation by at least 4 hours. 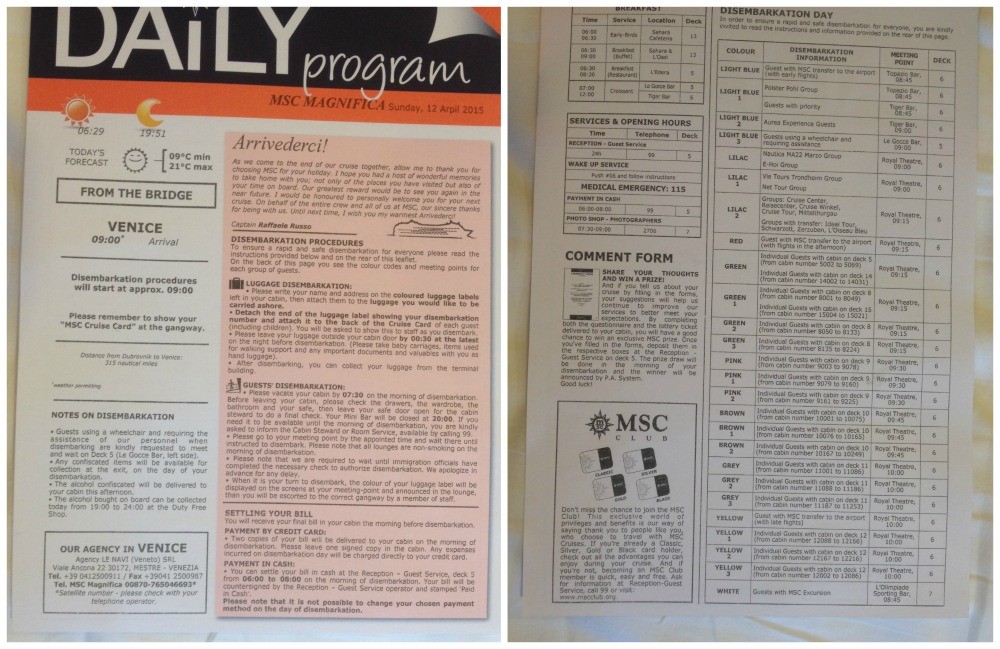 I made sure to be up and ready for breakfast in time to watch as we cruise in to Venice as this was one of the main reasons we chose this cruise so that we could cruise into the Venetian Lagoon, especially with discussions being held with regards to allowing cruise ships to enter the lagoon in the near future. Apparently ships over 90,000 tonne are not allowed to enter. I’ll try to find some more details to update this asap.

Anyway… To my horror I looked out the window and could see nothing. It was thick with fog and all hope of getting some great images of our arrival into Venice had gone. Well that’s what I thought…

We vacated our cabin and said goodbye to Suerte our cabin steward who had looked after us very well since taking over in Rio as our original steward had finished his contract and departed in Brazil. 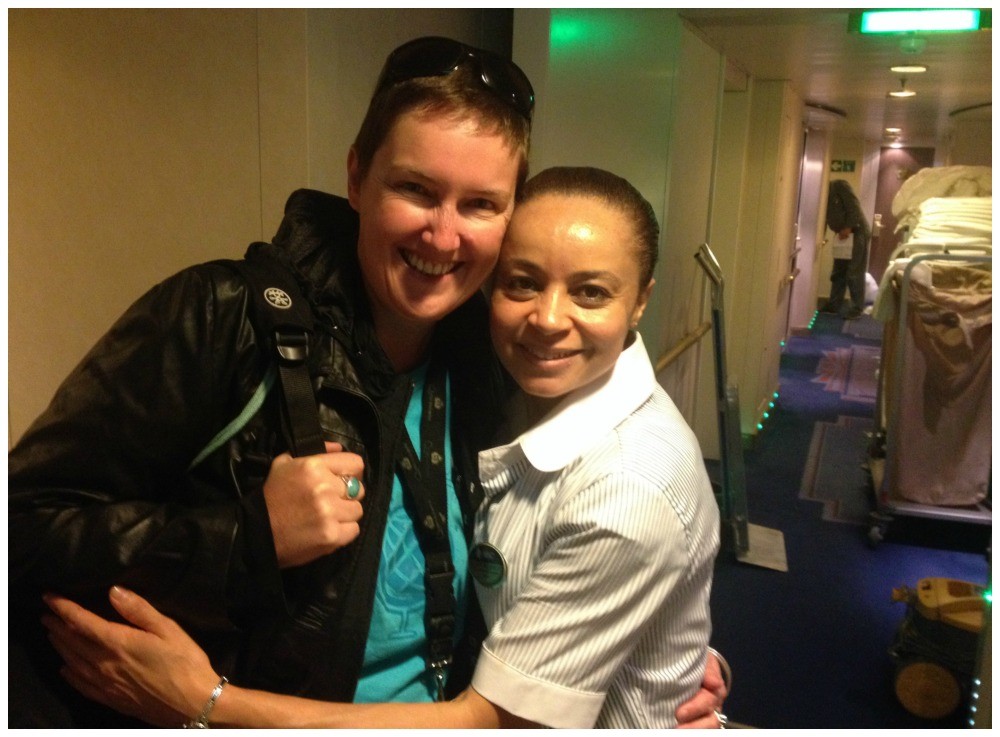 Suerte our cabin steward from Brazil 2015

We always make sure that our account is correct on our last night as payment will be done automatically from our credit card on file. We make sure that we are not one of those passengers that has to wait inline for ages to either check or pay their account this morning. The amount of people at the reception was crazy, add to this all the people sitting around waiting to disembark.

People waiting at guest services on the debarkation day, sitting around waiting, enjoying one last coffee

Being savvy cruisers we made our way to the cafe and secured a spot in the soft chairs and enjoyed one last coffee. Our designated area to wait for debarkation was the theatre, but we would need to sit and wait there for at least an hour under normal circumstances and so a coffee and soft comfy chair was more of my type of waiting area. 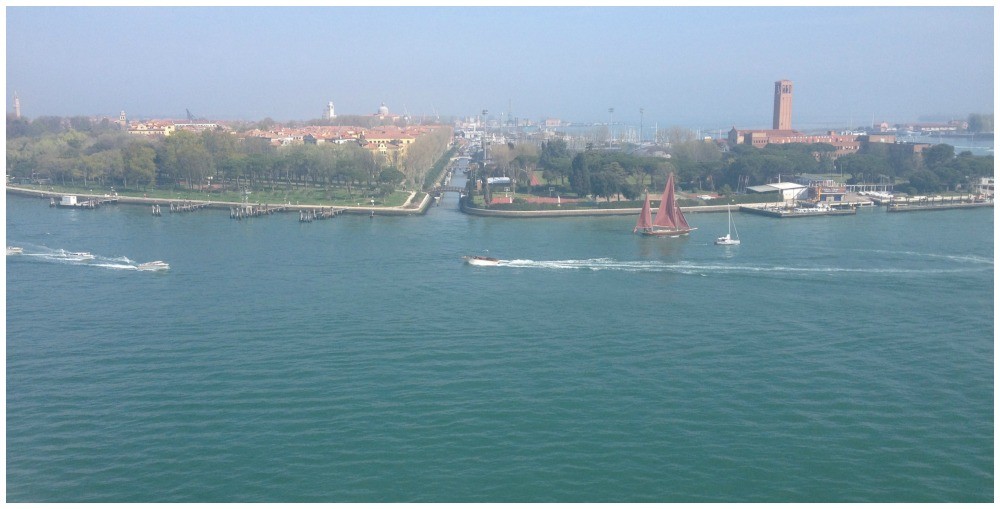 The officers announced over the speakers that due to fog, the port of Venice and entry into the Venetian Lagoon was closed until the fog lifts giving us a scheduled arrival time of around 11.30am. I was rather happy with that news because at least we will not miss the view as we enter the lagoon, nor will we have to wait with our luggage at the hotel before we can check-in oh plus we were sat in the perfect place to enjoy the view and coffee without missing anything important.

Some passengers were not so happy with the situation and there were plenty of raised voices from those with little flexibility in their onward journey from Venice… A group of Swiss were very upset and couldn’t stop complaining amongst each other about how poor this is from MSC. As if it is their fault, some people.

The fog did lift, but not for a while longer than expected. Thankfully we did get to appreciate Venice and its beauty as we eased our way up the canals eventually passing the Piazza San Marco to our right.

Cruise along the Guidecca Canal

Then moving into the Guidecca Canal and continuing along towards the port of Venice. 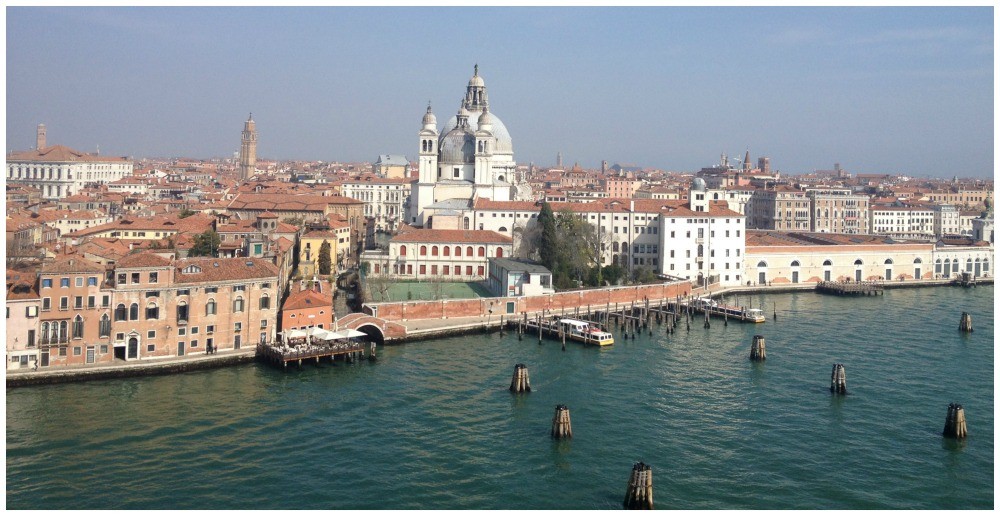 Is at the Venitian Lagoon still had a layer of fog surrounding it, even where we had cruised along looked like it was in fog.

Cruising up towards the terminal I’m not sure if I can see why anyone would be concerned about big ships coming to Venice, she glides through the water with hardly a ripple.

As we came alongside at around 11.40, I worked out that our debarkation time would not be until around 1pm as we were scheduled in one of the last groups. At 12 o’clock I tried to go into the restaurant for lunch, the staff said it was only open to those who were cruising onwards. I asked if we could eat at the buffet, which he didn’t know, but thought not.

Did I sneak some lunch

Anyway I told Moni that I’d go and try to get some lunch and bring it down to the cafe and eat as we had our carry off bags with us. 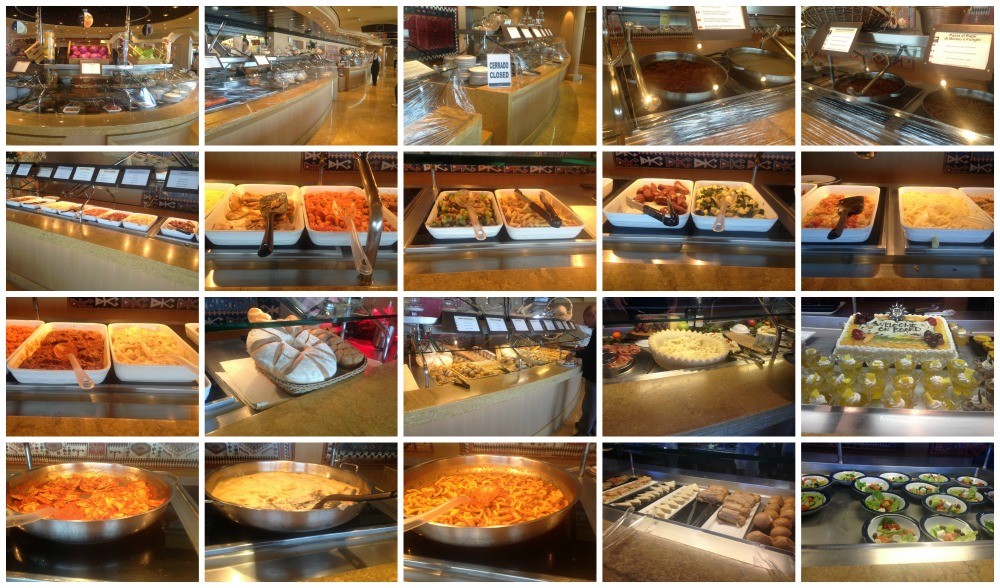 The buffet wasn’t open yet and I went back down, not before taking a look in the theatre where we were supposed to wait, boy was I glad not to be in there for the past 4 hours.

After waiting ten minutes I went back up to the buffet and this time returned with two full plates of food which we devoured as we had quite a hunger by this time. It also saved us from having to get lunch in Venice. I’m not sure if many others did the same thing, I’d hope they did as the wait to get a taxi and out of the terminal was next. 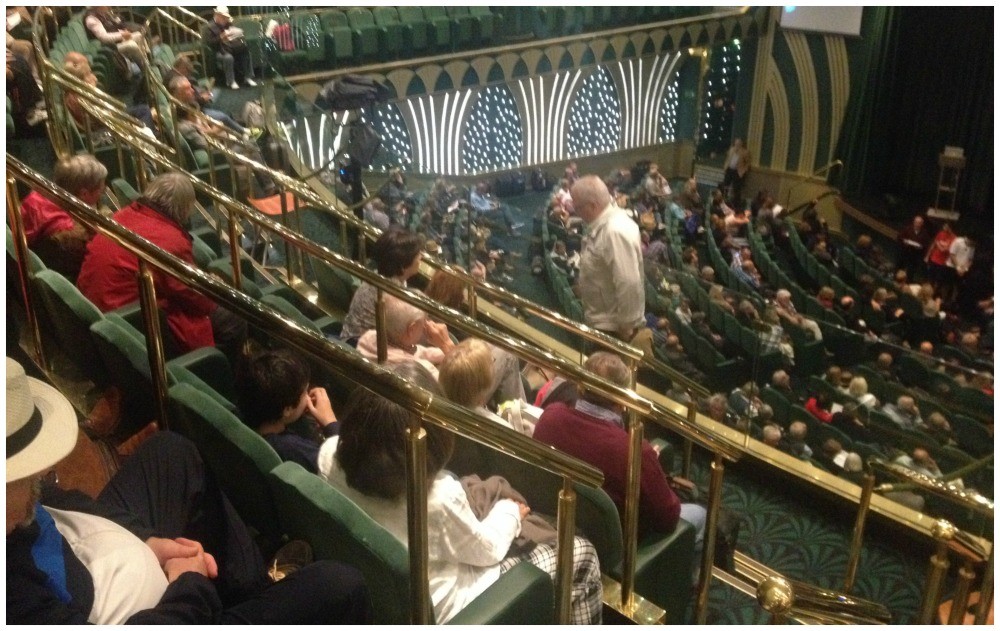 Disembarking passengers waiting in the theatre on MSC Magnifica 2015

Time to debark the MSC Magnifica after 22 days

We finally made it off the ship and into the terminal to collect our luggage. Most suitcases were all lined up and we found our two rucksacks here and there. The trolleys to use cost a Euro, but not only that, they were away from the bags so you had to battle the crowd to get a trolley than battle the crowd to get back to the bags!!

Once we had our trolley loaded it was then a challenge to vacate the area and get to the taxi rank… A taxi rank that never was. It was more a total chaos without any organisation from port staff what so ever.

There was no queue, not that South Americans or Italians know how to queue right. As a taxi pulled in groups battled to get to it first, I watched it happen three times and thought we are going to have to fight hard for a taxi.

The next one pulled in and quite near to where we were standing, as the driver opened the door I shouted “two to the train station” and shoved my bag into the back of the cab… He was pretty cool with that as most of the other passengers took forever to get their shit together. We bundled in and off we went.

Disembarkation, luggage collection and the battle for a taxi at the cruise terminal in Venice 2015

He dropped us off as close to the station as possible, which was not close enough but the taxis can’t get any closer. We paid him 20 Euro and started to walk with our luggage at a slow pace, after a few hundred feet we called it quits and paid a luggage porter to carry our stuff on his trolley. It was the best 20 bucks ever… he brought us to the hotel up and over a couple of bridges down a few roads.

We made it to Hotel Adua in Venice and checked in.

Get yourself a luggage porter in Venice, best 20 Euro you’ll spend

Tags: Cruising Into Venice With Fog Delaying Our Debarkation