Another sea day and another chance to experience the Gueridon service in the Olympic restaurant this evening. The Olympic is one of the speciality restaurants on board the Celebrity Millennium, others are Qsine and Bistro Five.

First up this morning we are greeted by an awesome sunrise… 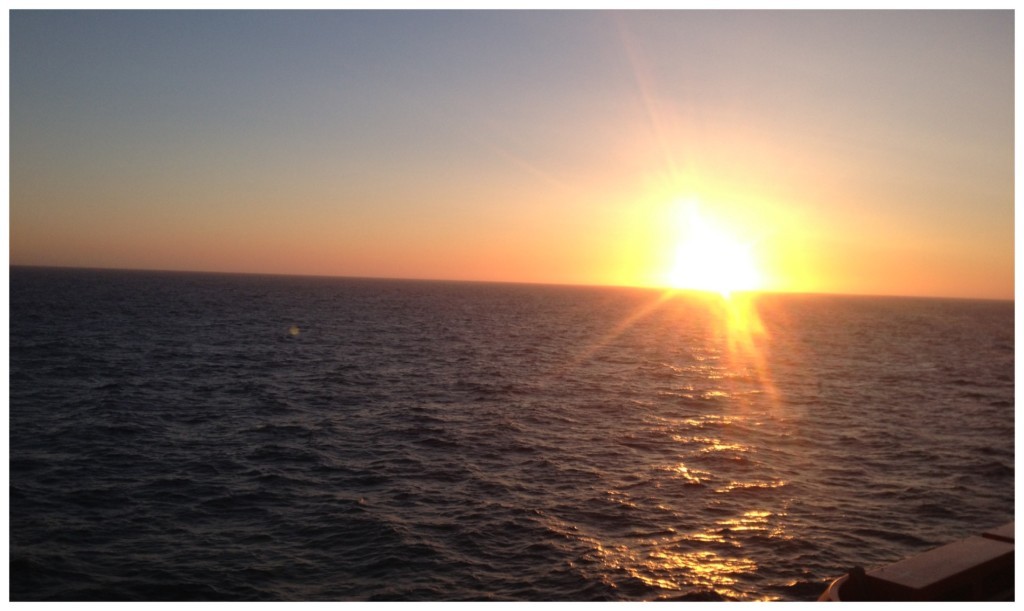 Sunrise on the high seas

Culinary cooking show in the Theatre

Next we were entertained by Chef Rufino and a culinary cooking show in the Theatre, it was actually two guests cooking under supervision, but still good. 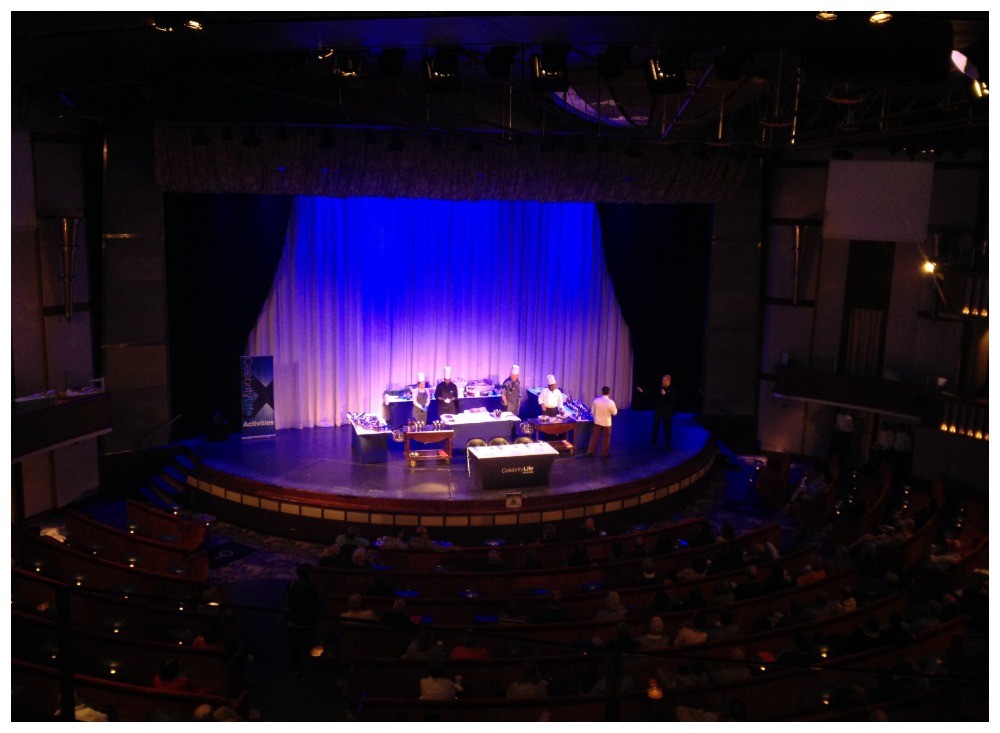 Then we relaxed with coffee and cake in the Cafe al Bacio, while also catching up on some work.

Views from the Glass elevator, Moni looking cool and relaxing in the Cafe al Bacio

We had finished our reading books which is unusual for me, (must have been all the sea days), and returned them to the Library. They were good books, which one did I read? 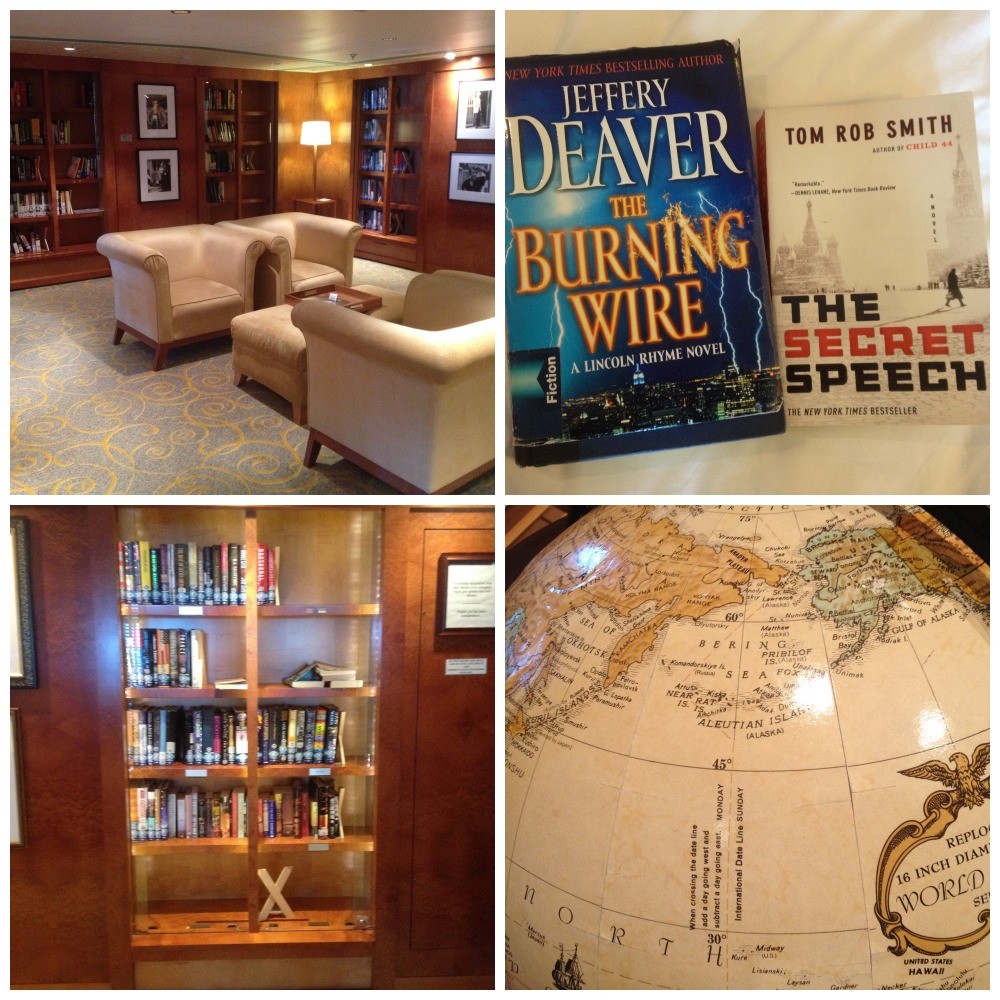 Books from the Library on Celebrity Millennium

We skipped lunch today as we had our second dinner in Olympic and wanted to make sure we had room, last time I was so full.

Dinner in The Olympic on Celebrity Millennium

Tonight’s dinner was great and we had different dishes from the menu than our previous dinner in Olympic.

Tonight we had a chilled pear soup for amusbouche followed by baked scallops in pastry. I was wondering how this would turn out knowing that it takes too long to cook the pastry… and I was right, the scallops were overcooked (use phillo next time)… Moni had risotto with truffle foam, again this lacked the wow factor. 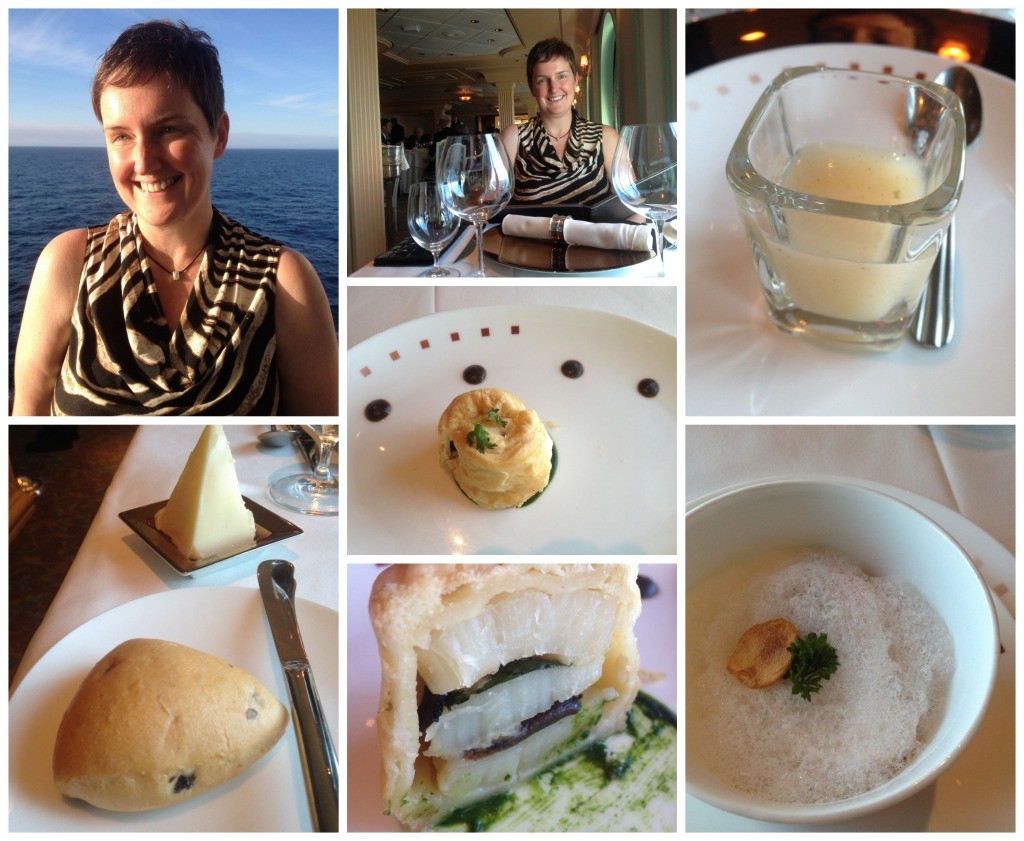 Moni choose to have the Lobster dish cooked on the Gueridon trolley at the table, which was awesome.

For our main meals, I choose the rack of lamb which was very good but they need to have better timing, not good having my dish ready well before Moni’s. Moni choose to have the Lobster dish cooked on the Gueridon trolley at the table, which was awesome. If you dine in Olympic I’d recommend at least one dish that requires the waiters to cook table side for you. 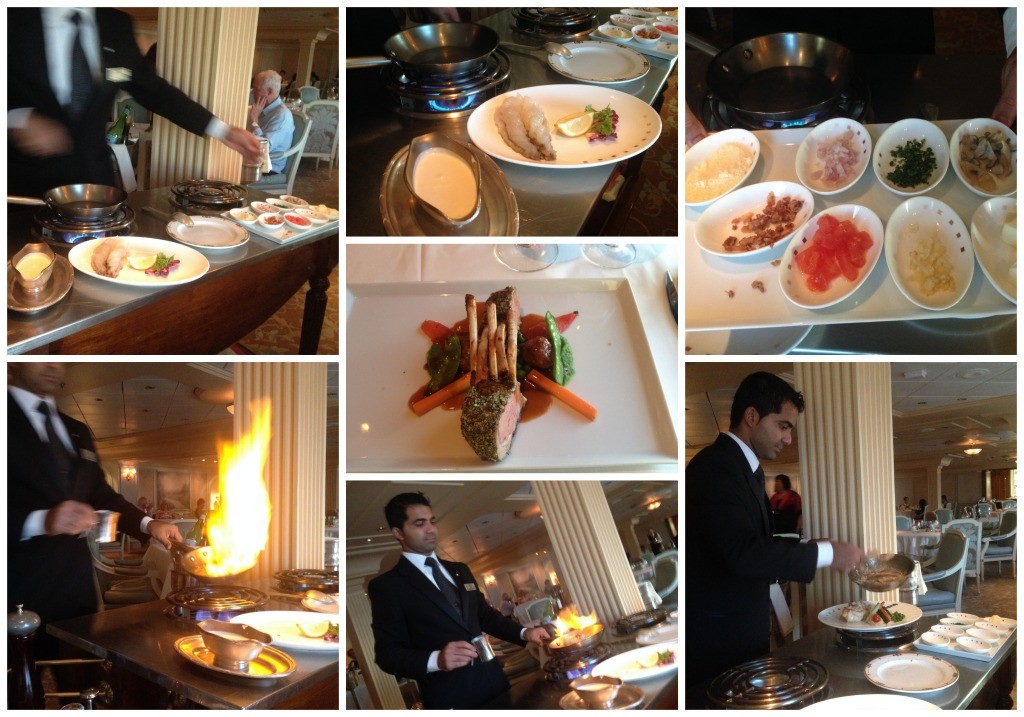 Then for dessert I had the pancake parcel with balsamic strawberries which is also prepared at your table and flambéed with cognac which was divine, while Moni had a selection of cheese from the cheese trolley. 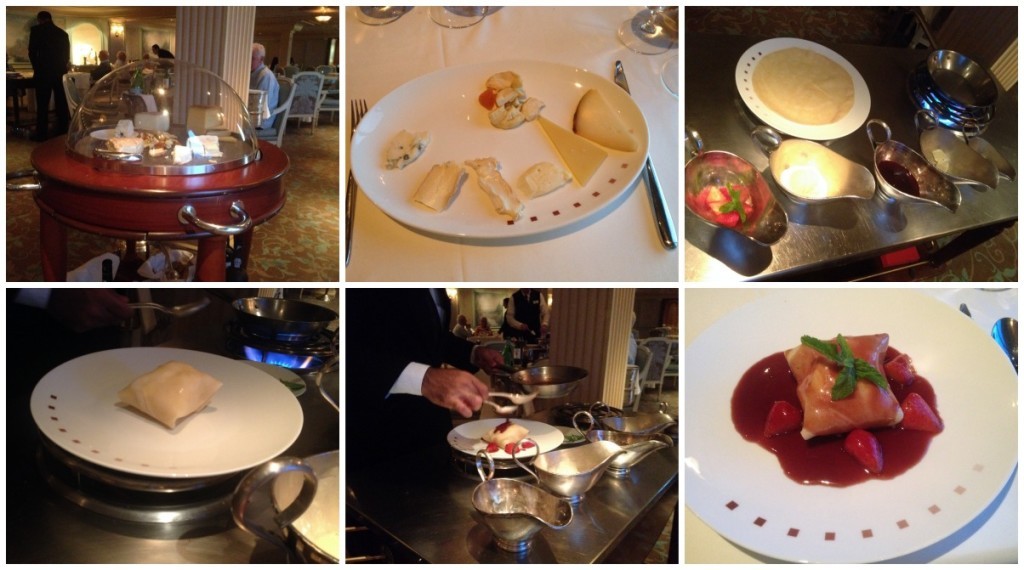 Gueridon service is generally performed by the most senior competent waiters in the dining room, sometimes even the chef may cook at your table at the gueridon trolley.

The reason behind this type of service is to show off the skill of the waiter and to enhance the experience at the restaurant, generally only fine dining establishments perform such service.

When I was cooking I used to cook our most popular dessert table side it was ‘Crepe Suzette’.

Most dishes are flambéed which is the addition of a high alcohol content spirit (usually cognac) to the hot pan which when done correctly will burst in to flames, “the flambé” for a few seconds before burning out adding to the wow factor of the experience. However not all dishes performed on or at the gueridon trolley are flambéed, some are just finished at the table, like carving a Chateaubriand or rack of lamb or even filleting fish.

There are some very specific dishes prepared for the gueridon trolley service and others have been adapted as well. It is an experience worth having if you get the chance.

Let me know in the comments below

We would love to hear from your experiences eating at The Olympic.

The Olympic on Celebrity Millennium has unfortunately been replaced with the Tuscan Grille that is a big hit on the Solstice class ships.

I think this is a real shame as what will happen with the ship’s removing these very special and unique venues and replacing them with the successful venues from other ship’s is that each ship will just have the same dining venues, which in my opinion is not a good thing.

Again, let us know in the comments below what your thoughts are.

Speciality Dinner in The Olympic Restaurant on Cel...
Groundhog Day, The Same day Again After Crossing T...
Cruising the Inside Passage Towards Vancouver
Awesome Sunrise and a Cooking Show With Chef Rufin...