When you have plans to be somewhere, like Takayama, you do what it takes to get to Takayama to see the Spring Festival or Sanno Festival as it is also known. The Takayama festival origins date back to the early 17th century and is a celebration of the coming of spring to Takayama, a small snow bound city nestled between mountains. Takayama spring festival is held on the 14 and 15 of April each year. Takayama also has an Autumn festival which is held on the 9 and 10 of October each year.

Setting the alarm for the right time so that we can make client calls around the world knowing that we’ve actually got the correct time has been a challenge with a few mishaps, but this morning all went well. We were  up early and Moni’s client call went well.

This morning was extra important that we had no stuff ups because we had to get over to Shin Osaka to catch the train to Nagoya where we’d change to the Hida Express to Takayama. Having tried to reserve seats for the train the other day with no luck as all were full, we knew we had to wing it. This is a very busy time of year and we expected it and now had to chance getting a space if not we’d have to make do, either way we had to go because the Takayama Festival is only on tonight and our accommodation is booked.

“The train was full, we knew we had to wing it”

Our train from Osaka arrived on time and we ran across the station to the platform where the Hide Express was waiting, we only had a few minutes to change trains. Getting on the first carriage we notice all seats being occupied the next carriage the same, finally we spot two wheelchair seats and spaces available and took the chance and sat.

“Fortunate for us we found wheelchair seats on train to Takayama” 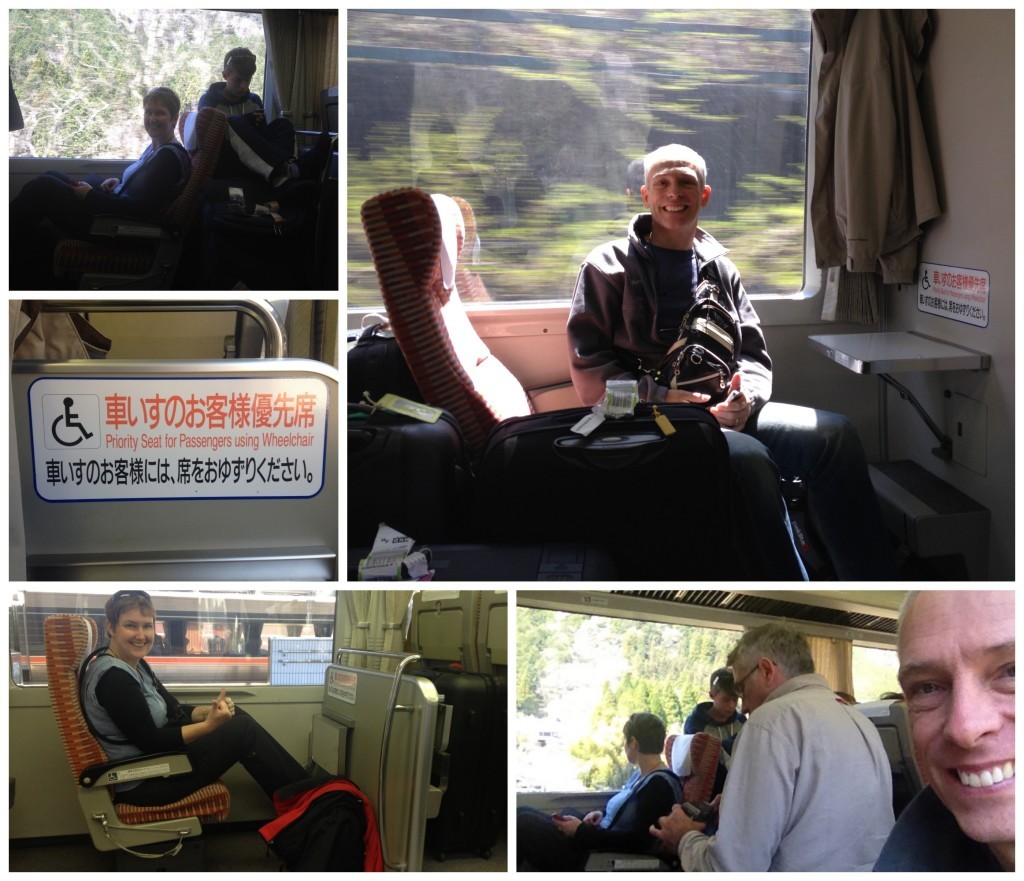 Fortunate for us we found wheelchair seats on train to Takayama

We were lucky to keep these seats all the way, and as the train was full many had to stand the entire 2.5 hours journey, some sat on their luggage others on the floor and a few managed to get seats as others got off but the majority were traveling to Takayama to see the festival and had to do what it takes to get there.

The journey itself is very picturesque unfortunately the pictures from inside the carriage don’t do it justice. 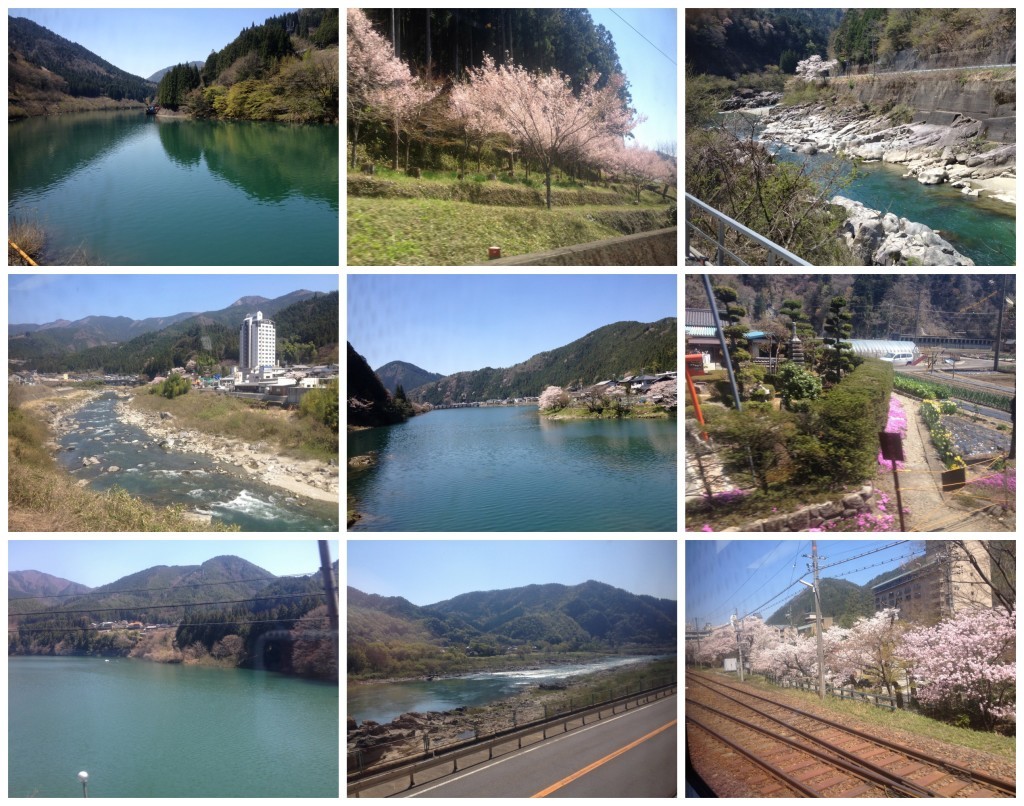 Images from the train journey to Takayama

our first thing to do was to reserve seats on the bus for the next day to go to Kanazawa with a four hour stop over in Shirakawa-go. This booking took no time at all at the bus station which is right next door to the train station. 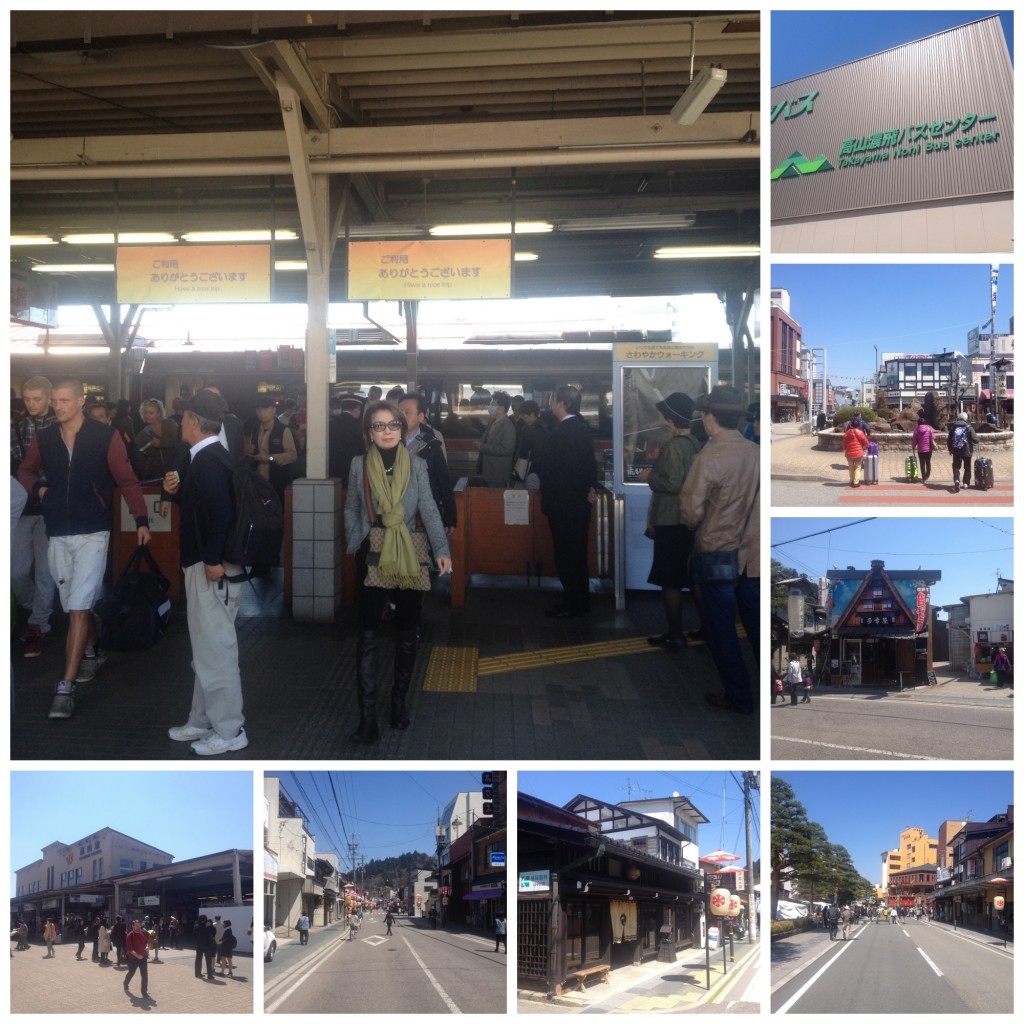 Arrival in Takayama station, with the bus station next door and street views

“Our Temple stay in Takayama at Zenkoji Temple”

Then we walked about 15 minutes to our temple accommodation at Zenkoji Temple for our stay, here we left our backpacks and walked around the village until our room would be ready. 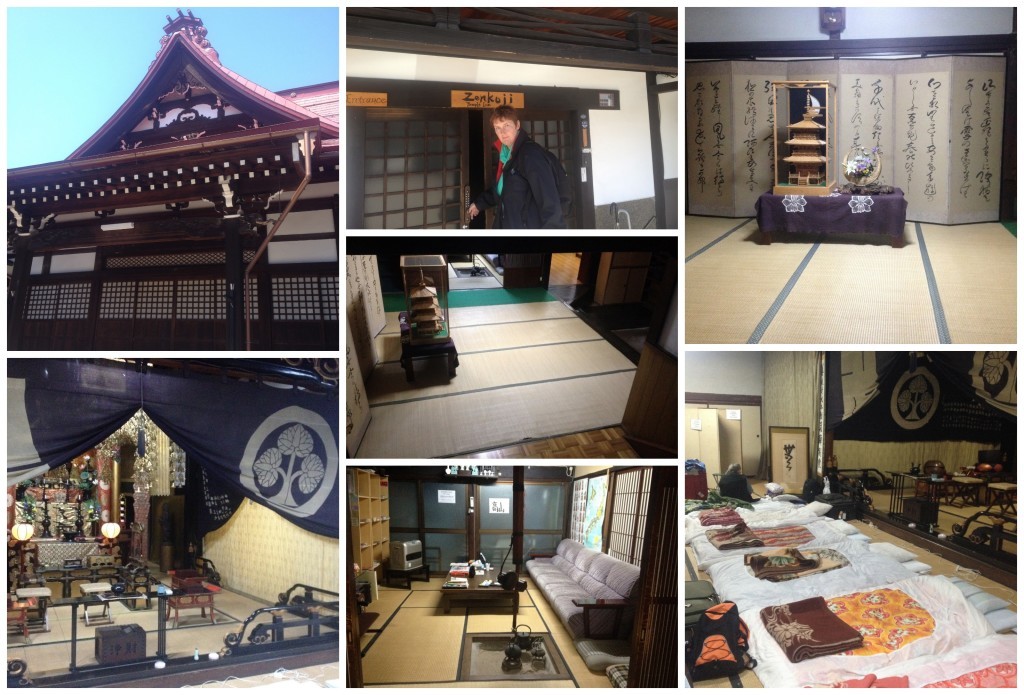 Our accommodation at Zenkoji temple

The weather was wonderful and warm so we spent time looking at all the festival floats (Yatai) on display throughout the village enjoying ice cream in the sun. There are 12 yatai (festival floats) that are displayed at various points in the town, a guide map helps you find your way around so that you can see all the floats.

A side note here, if it is raining the floats do not come out of their houses but you can still see them as they open up the huge doors for you to look in, I’m not sure that you would appreciate exactly how wonderful they are though. Outside you are able to walk around them in natural daylight which really makes them glow.

Yatai houses where the floats are stored

As you walk around using the map as a guide you have the chance to get up close (depending on crowds) to some of the Yatai. The detail that has been hand crafted on these floats is amazing, you can understand why they are so proud of them and keep them protected if bad weather comes.

Intricate detail on the Yatai

The gathering of the Yatai has been designated by the Japanese government as a tangible folklore cultural asset. It’s a display of intricate structures, exquisite carvings, drapes, lacquer-work, metal ornaments and more. 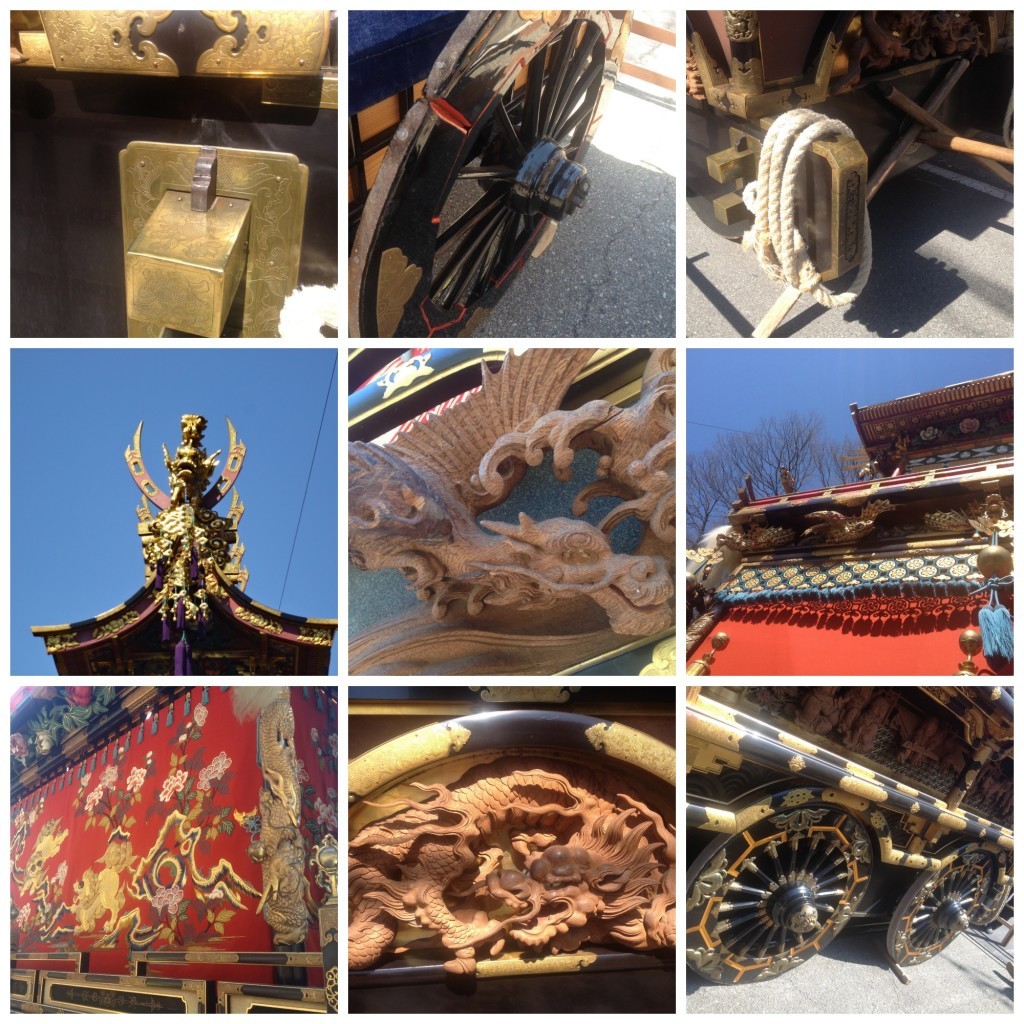 more images of detail on the Takayama yatai 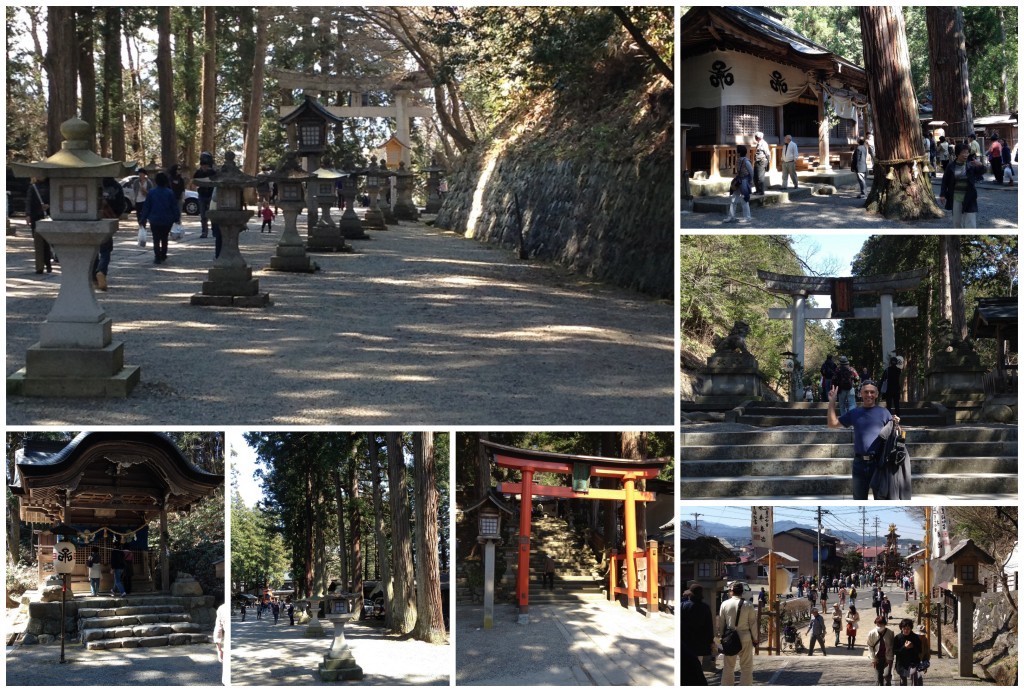 Images from the Hie Jinja Shrine in Takayama

Having walked and walked around all the streets looking at the Yatai and the town, eventually we get to take some cash out from a 7/11 before heading back to our digs for an hours nap as we are tired. 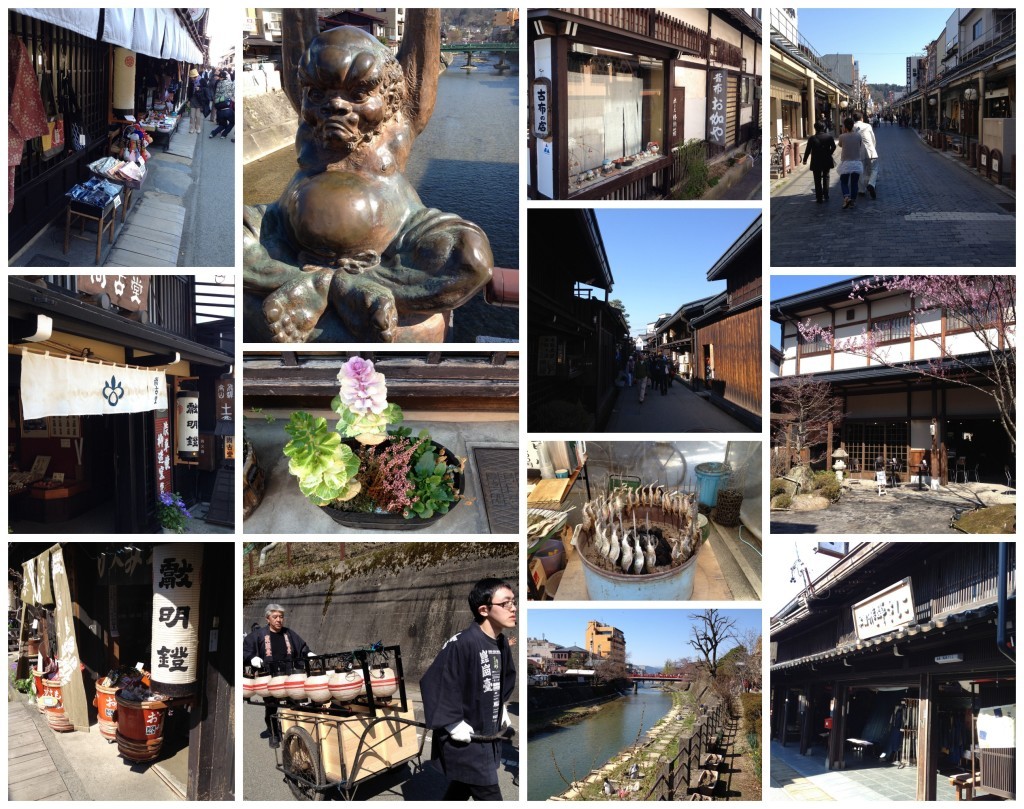 Images from the streets of Takayama

through some of the streets, it is now very cold.  The route is marked on a the guide map and people are lining the roads and bridges hoping for a glimpse of the passing floats. We find a spot in a quieter area, which is not quite for long as more and more people arrive, silly me, by the time the floats are coming the streets are packed, lucky we have front the row and Moni guards it well, fending off all wannabe intruders…

The floats pass us one by one, pulled & steered around by a group of men. Not an easy task considering that the wheels don’t turn so the whole heavy float needs to be nudged into place. An awesome spectacle that is highly recommended which only happens twice a year and then only if not raining.

As they make their way through the evening with their lanterns swaying heading back to their Yatai houses, there is a somewhat repetitive tune that is sung apparently only at the night festival… 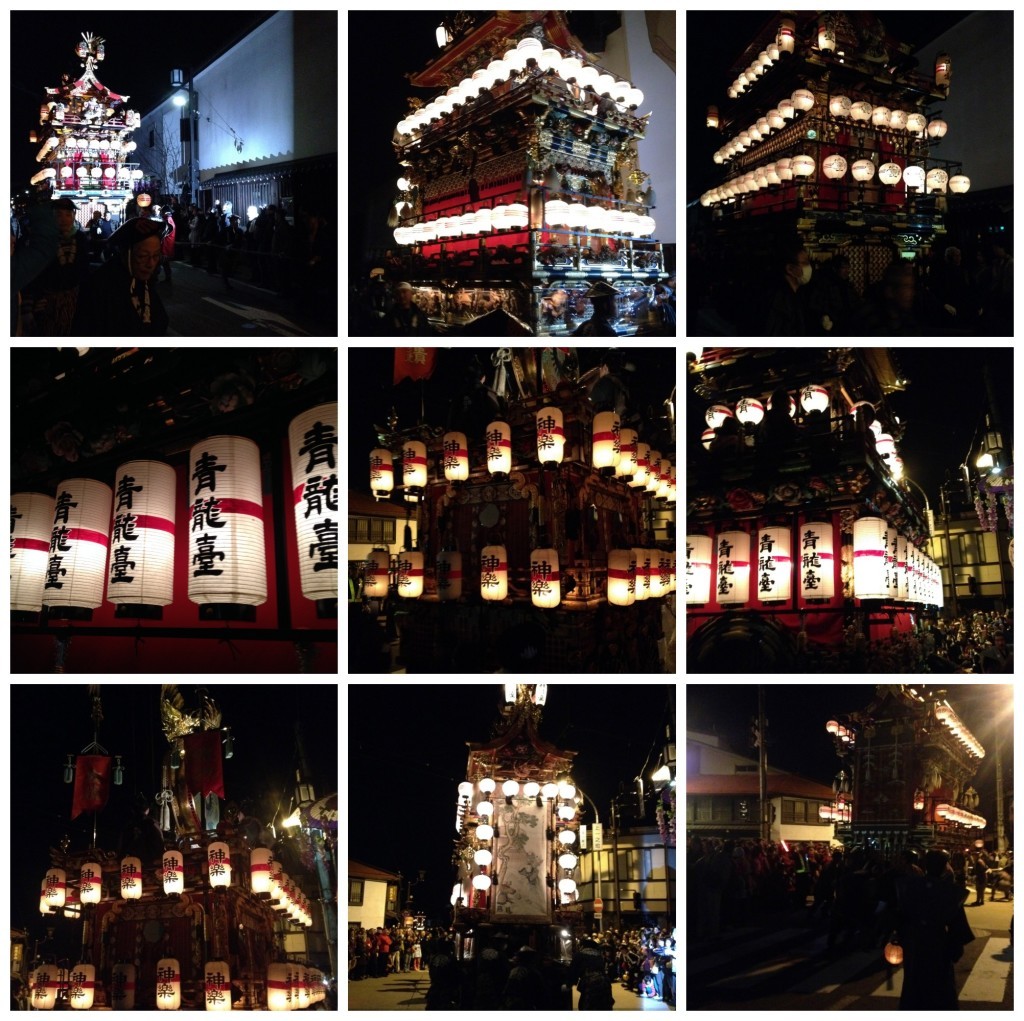 A great place to stand and watch is at one of the corners of the parade, as you can see the floats coming down the street and the Yatai must stop to turn which would give you a great opportunity for photos hopefully not blurred. I had some difficulty in capturing some clear shots. Actually out the front of the restaurant where we ate would be ideal. I’ll remember that for the next visit.

A quick point about the accommodation. If I had not booked our place to stay months back we would have had no where to stay the town as it is totally booked out, even when I was booking way back then some places had no space. The other thing to bare in mind is that some places also don’t accept bookings further out than three months.

After the last of the 12 floats passes us about two hours had gone by and being cold and hungry we head straight for a warm restaurant for dinner, making our way through the crowds of people.

During the day on our walk around town we had spotted a place that looked good, the only thing was it was dark now and harder to find, after a few streets we turn a corner and thankfully there it is. Fighting through the hoards of people to get to the door we make it in.

“We were very frotunate to find a place for dinner”

Standing in the area near the cash register we enquire about a table, the waiter asks if we have a reservation, we didn’t and he looked at us strangely… then somewhat perplexed he took us to a couple of free spaces at a large table, later we had to move to another table to make room for more guests. (Apparently there was a waiting list to get a table, which we didn’t know until we saw them being ticked off). 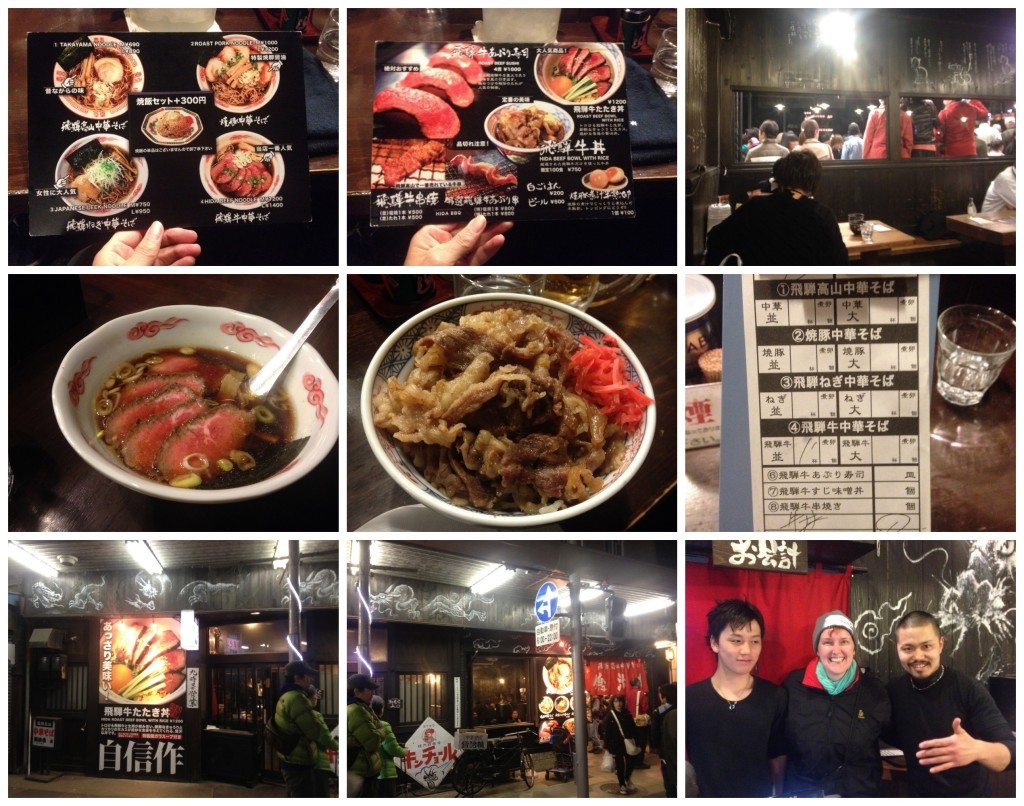 Images from dinner in Takayama

This place was very busy and people were having to wait for a table, the list was a full page long so we were very lucky again. Our Hida beef was great and we found out that Hida beef is from Japanese black cattle which have been fattened up for more than 14 months within the Gifu prefecture.

After glass of Kirin beer and dinner we are very satisfied and begin our brisk walk in the very cold air back to our temple digs and a warm cup of tea then up to our room, on with the heater and electric blankets, yes the Zenkoji temple provides electric blankets in winter time.

All up, today was a huge event with so much to absorb, right now I’m real tired and looking forward to some sleep. What ever you do if and when you get to Japan, and you time it right either in spring or autumn be sure to do what ever it take and go visit Takayama, even better, combine a visit to Shirakawa-go on the way through to Takayama or Kanazawa.