Warning, riding a bicycle in Japan is serious fun but also seriously dangerous. Actually just walking along the footpaths can be hazardous at the best of times. The footpath is shared with cyclists and both get in each other’s way. We were witness to a nasty collision in our first week in Japan, as a bike came around a corner and bowled over a gentleman walking. Today is our first day of going out on the bikes that are part of the AirBnB apartment we are renting.

Today I was awake very early, (5.17am) not sure why, considering the late night and bottle of red we drank last night.

Moni continued to sleep like a princess on our futon fold out couch/bed that we make up and down every day… Until I woke her with a warm cup of green tea from the new pack which we bought yesterday.

After a mentoring call at 9am Moni was out of the door and heading to the Beauty Salon for a hair cut. I stayed home and did the washing. Moni had cut my hair a couple of days ago in the bath tub… Sorry, but no photos of that funny time.

On her return after about an hour she shone brighter than the sun, her beaming smile from cheek to cheek, obviously it all went well, not only did her hair look great but the story of the treatment sounded awesome. From one lady taking her coat, then offering water, magazines etc.

Moni had taken a photo of Rhiana’s latest hair style and shown it to the hairdresser as a guide to how she wanted it, pictures speak more than words, especially when it’s English/Japanese.

The result, after being wrapped up in a towel, clothes protector and a soft neck roll to stop any hairs from getting onto your body. From the cut to the wash to the massage to the blow-dry, chair to chair each time with new covers towels etc.

At the end instead of being up-sold on various items as per the norm in Australia and other countries, she was given two new combs and a hair brush!! And all that for just 3700 Yen about $39. Now that is service.

After a few photos we promptly went out for lunch to our usual and enjoyed a bowl of Ramen, rice and Gyozo. Then is was back home to do some more work. Yes this week has been quite a lot of work. Sometimes you just have to knuckle down and produce what is required without being distracted.

Our favourite Japanese lunch place in Sembayashi-omiya for ramen

“Warning, riding a bicycle in Japan is serious fun but also seriously dangerous”

The weather was great so whilst the computer did the uploading of a few documents we decided to head out for our first afternoon bicycle ride. Our apartment here has them for the guests to use. After our first stint we wished we had taken them earlier for a spin, we loved it. Up and down the roads we cycled not really knowing where we would end up, buy hey thats half the fun right.

Bicycle’s in Japan are very popular

Riding a bicycle in Japan is very popular, I’d also say dangerous both for the cyclist and the pedestrians.

“I tell you, they come from all angles & directions”

some with speed others just moving enough not to stop! They carry the shopping, the washing, the kids, yes plural, one in the front basket and one on the back, no helmets, some talking on the mobile phone, smoking and chatting to those in front, beside and behind. It is a sight to behold.

We wanted to try out another coffee shop but as we came to it the sign said closed, oh well, so we cycled on but found nothing open. We ended up back at the place we had coffee before. We parked the bikes and locked them up with locks which are fitted and easy to use. The bikes have stands so they freely stand.

“Into the coffee shop… Smack in the face with smoke!!”

This has to be our biggest grudge about Japan, the ability to smoke in many eateries, coffee shops etc. Thankfully the smokers all cleared out and we were left to enjoy our coffee and cakes. A good bit of ventilation having the doors open quickly cleared the air. Just as we finished the next batch of puffing dragons waltzed in which signalled our exit. 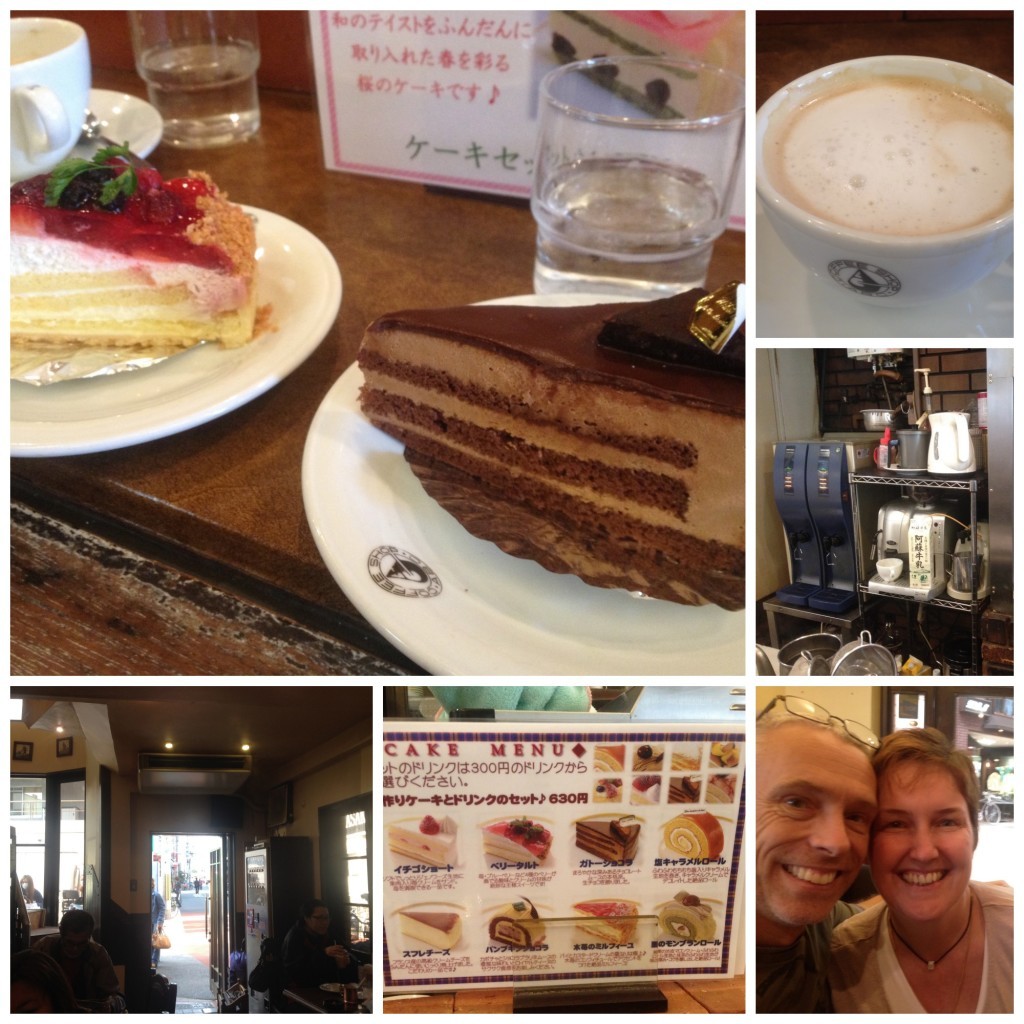 Back on the bikes we road around in another direction, this time up roads until they ended and back others, left turn right turn. Eventually we came to a road we recognised and soon we were stopping outside the sushi shop. Mieko and Nishimori had a laugh and we we offered tea and very sweet bean desserts. Sweet I say, finger sticking sweet. We ordered sushi to take home for later on and after our chat we were on our way.

Back to the computer to finish up another project, then sushi was enjoyed and washed down a treat with a Kirin beer.

What a great day. I’d like to say we will certainly try to go bicycling around the streets of Japan again.

Yorky’s Knob, so Close Yet Still so Far
What Does it Cost to Live on Bowen Island
Queen Elizabeth Maiden Visit To Kagoshima
Papua New Guinea lush And Volcanic
Our Leap Into a New Adventure: The Entrepreneur’s ...

Tags: Coffee and cake in Japan, cycling in Japan, entrepreneur's odyssey, haircut in Japan, location independent, riding a bike on the streets of Japan, Sushi in Japan, travelling the world with a business