After two days at home fighting a tough battle with the cold/flu, spending all day in bed, Moni is feeling a bit better. I have been out only to get some nourishments so nothing much to report. Hence no posts for the past few days.

Today began first with a visit to the chemist to get a face mask for Moni and some tissues. Many people here wear these face masks to both protect themselves and also stop them spreading germs. Moni felt obliged to do the same.

Moni masked up in Sembayashi-Omiya

Next, we had a breakfast at around 10am of rice and beef from a local place, just along the main road. It’s good value (cheap), plentiful and fine. You order from a machine using the menu interface, we just choose from the pictures, paid the money and then the server takes your ticket and soon after your food arrives. All very simple even more so if you understand the lingo. 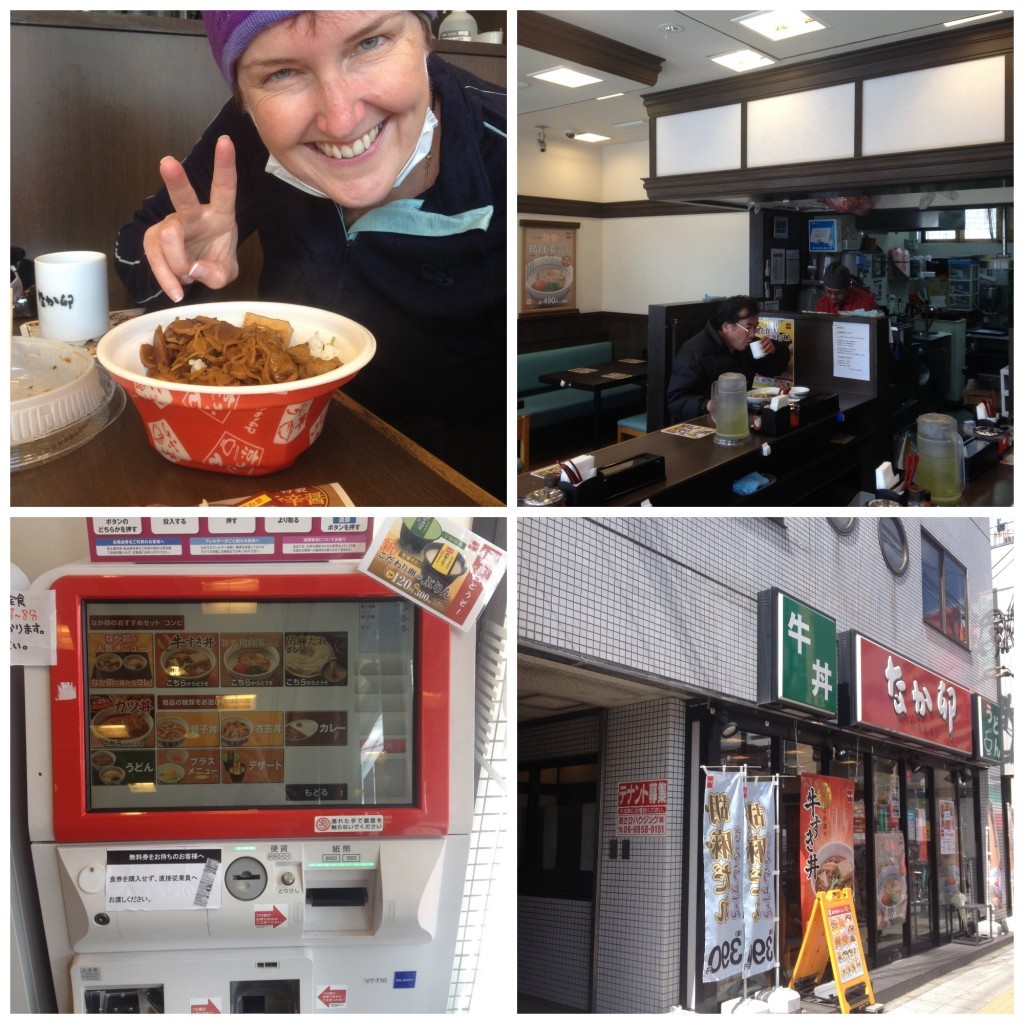 Feeling full we left the restaurant and took the subway to Osaka station, and then the train to Kyoto which is not far at all and you have various trains (subway) to catch. The stations are very well laid out and there are plenty of signs to help navigate, even though we still need to double check. In the photo top right corner, you can see the detailed standing area clearly marked out when lining up for the train with each carriage number marked on the platform.

The stations are very well laid out and there are plenty of signs to help navigate, even though we still needed to double check. In the photo top right corner, you can see the detailed standing area clearly marked out when lining up for the train with each carriage number marked on the platform.

Outside the station, you will find many bus stops and from here we took the bus number 100 towards the temple. We had to find out exactly where to go from the tourist information office in the station, which is very helpful. A Kyoto day bus pass costs 500 Yen a one-way single costs 220 Yen so it easily pays off. 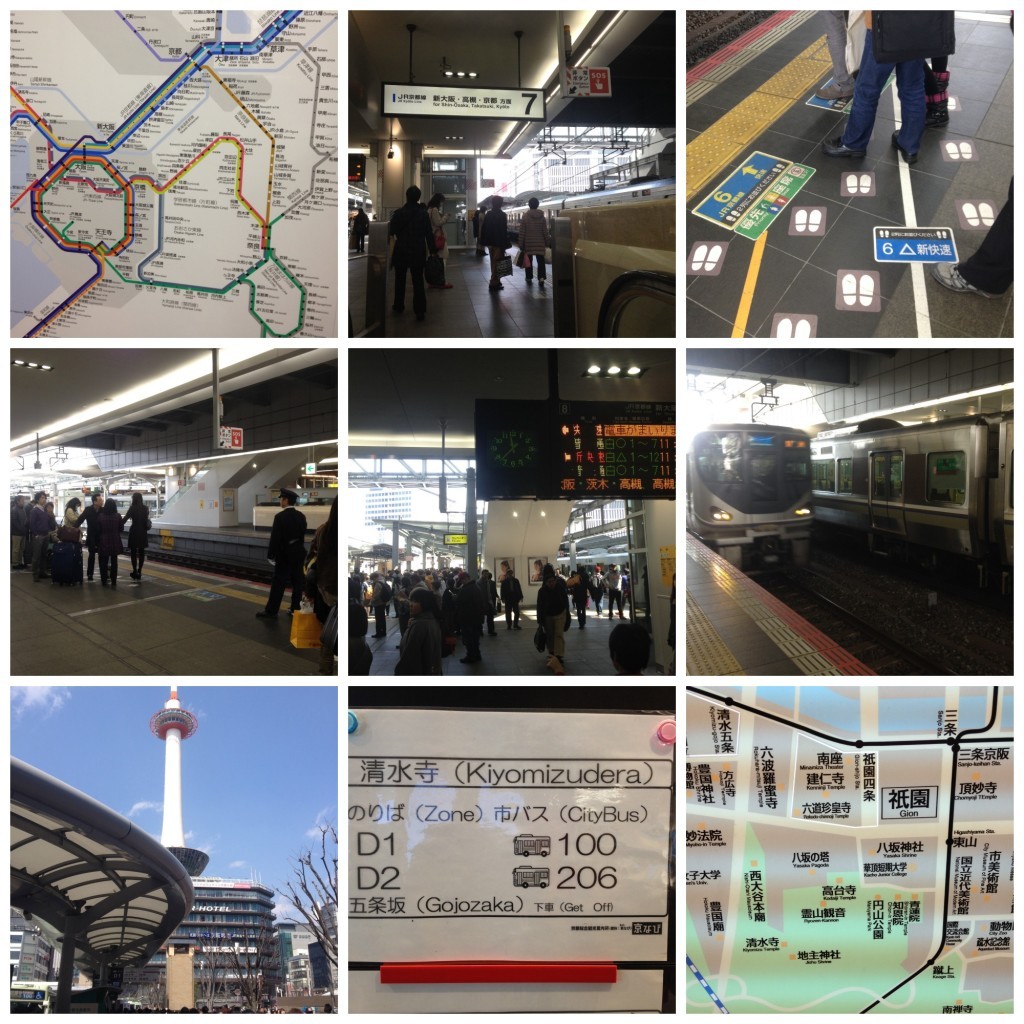 Images from the Osaka subway and the bus stop in Kyoto

The bus from the station was jam packed with standing room only for us. It was very busy being the last day of Hanatouro the illuminations and many locals are enjoying the last chance to see the lights. The map below which I took from the Japan Guide website shows the area we walked and the points of interest.

Map of Kyoto showing the walk we did

Unfortunately, we got off the bus one or two stops too early and then had to catch the next bus a few stops more, lucky they come very frequent. 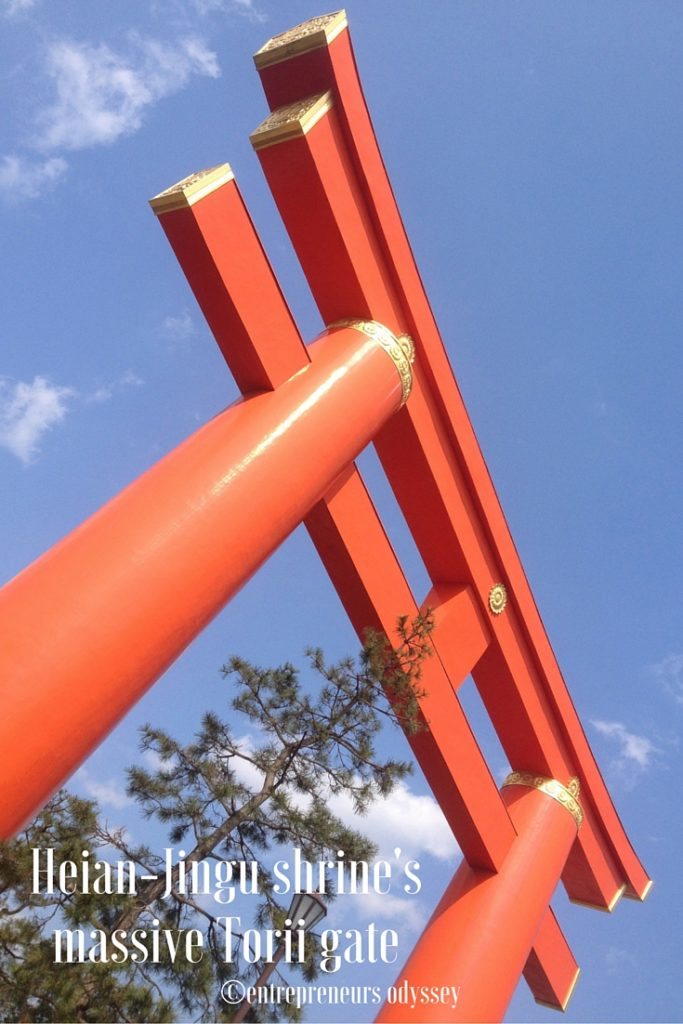 From the next stop, we consulted our map and made our way along the walk towards Kiyomizu Temple. But first, we spotted a huge red Torii gate and a bridge also red, that is the gateway to Heian-Jingu Shrine. This Torii gate spans the entire road and is huge, probably one of the biggest in Japan. 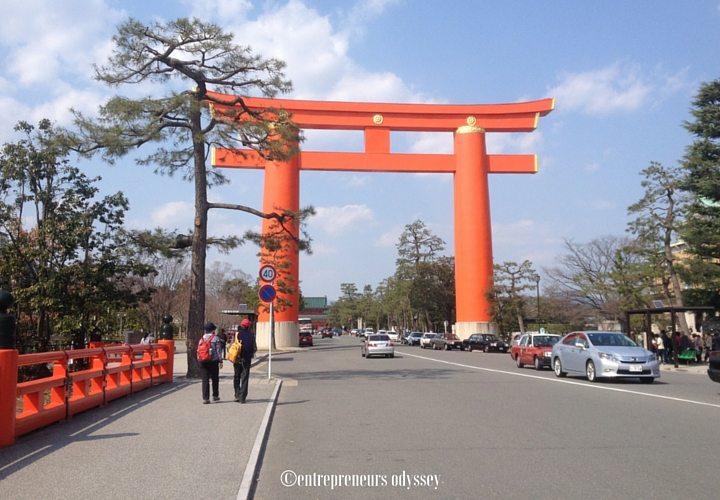 Not sure what’s to see at the Heian Shrine, we walked along the road with many others to take a look, by the time we got there Moni was buggered and only sat on the step while I took a quick look around, then it’s back on the road.

This is the entrance to the Heian shrine, which is already very impressive. 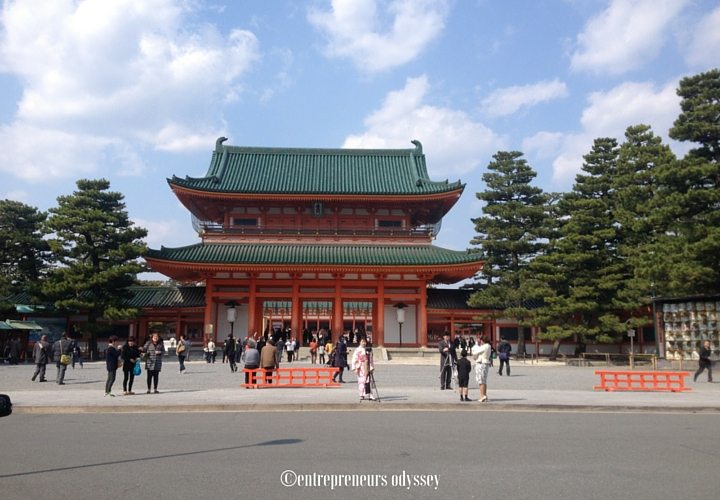 Entrance to Heian-Jingu shrine in Kyoto

Once you pass through the entrance, you will find yourself standing in front of a huge courtyard of small white stones and in the distance is the Heian shrine. 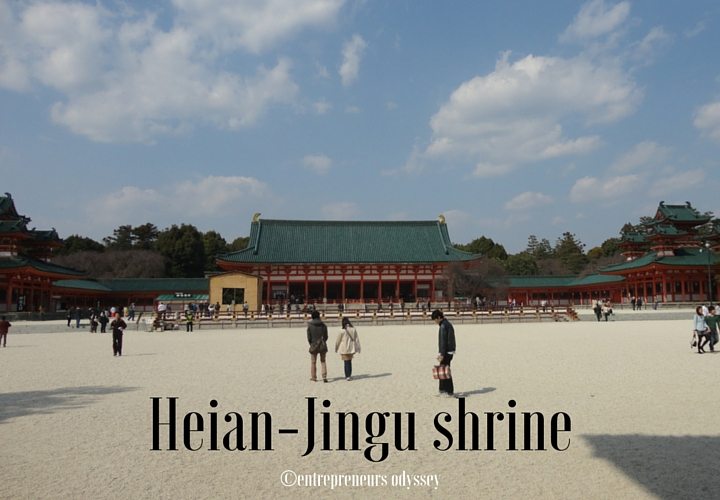 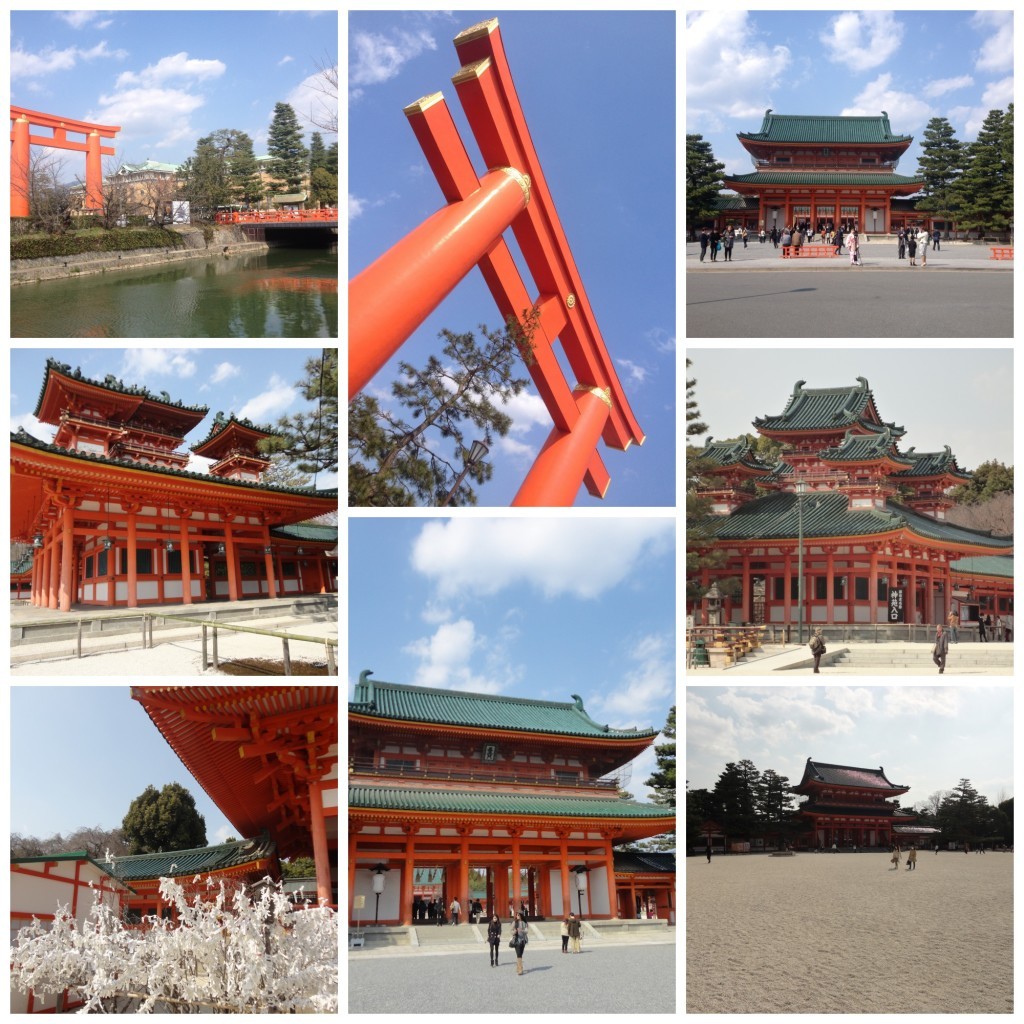 Images from the Heian-Jingu shrine

Leaving the Heian-Jingu shrine behind us we walked at a leisurely pace as we had plenty of time to see the sights, we decided to get a bite to eat as we were in need of fuel.

We stopped at a small place and had a basic but enjoyable lunch of rice and mince, together with a tea. Very expensive for what it was but hey it’s a tourist area so what I expected. 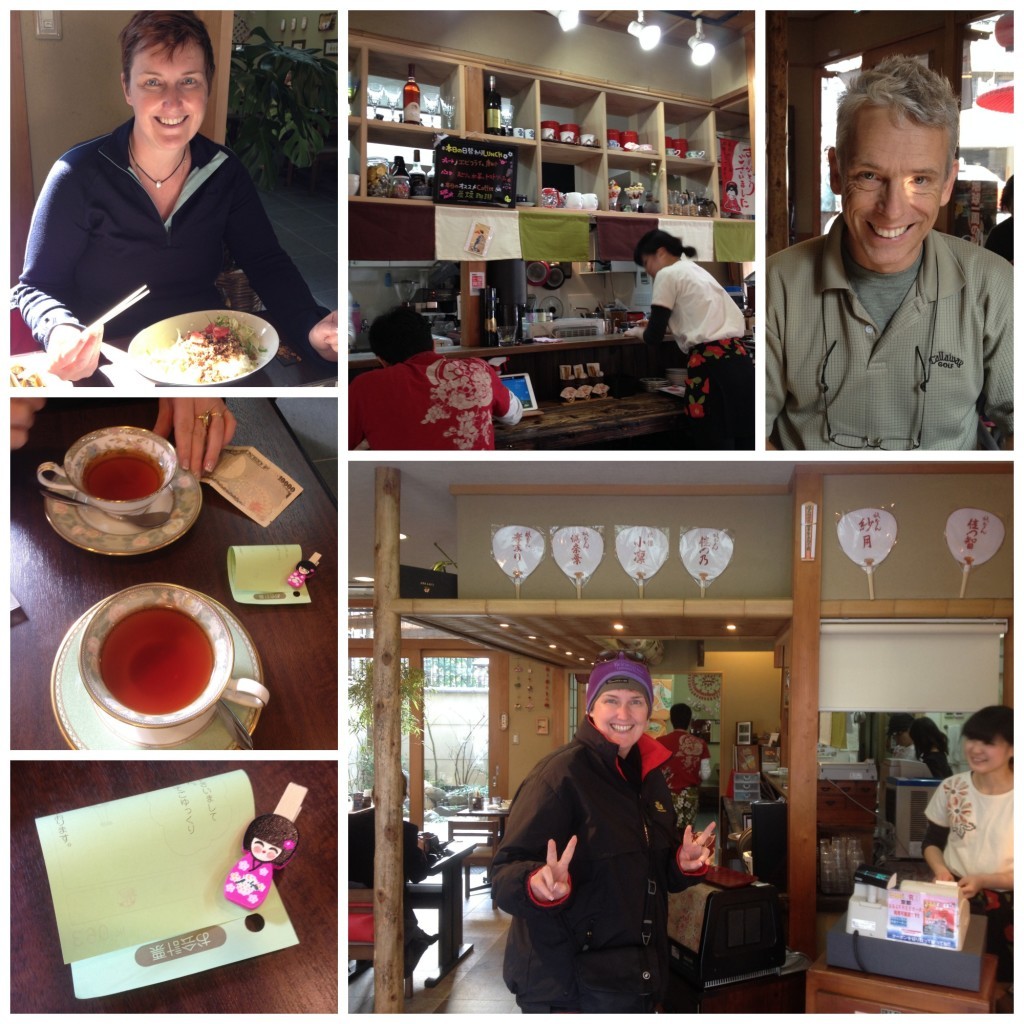 The following part of our walk took us past the Shoren-in Temple, again we just took a quick look and then onto the next. 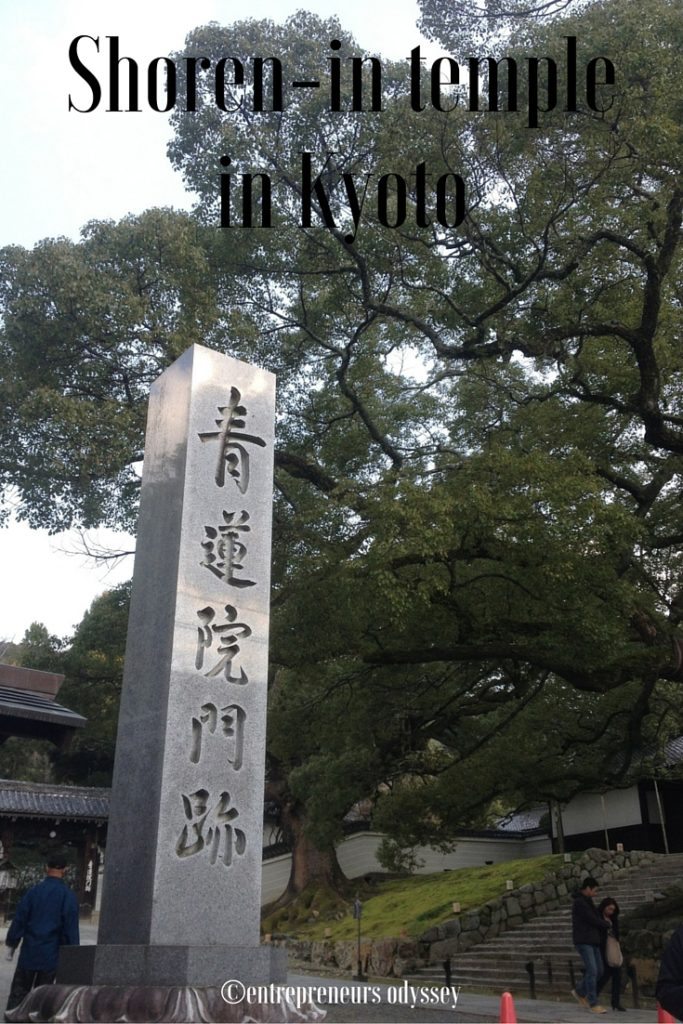 I have used this Japan Guide website for most of my research for finding out lots of great valuable information on Japan. 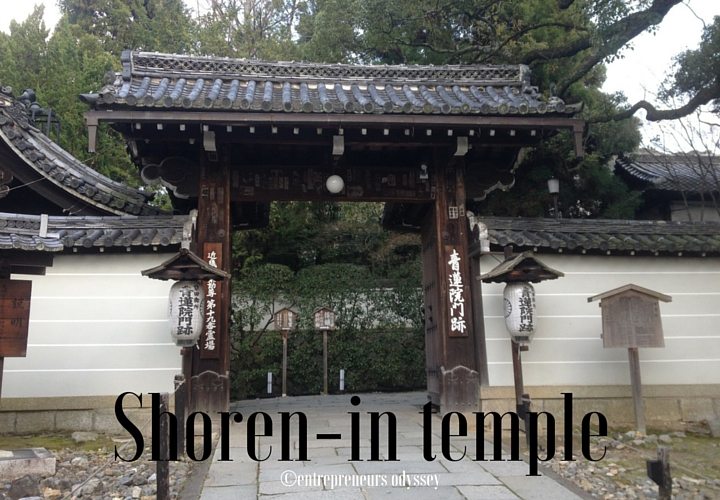 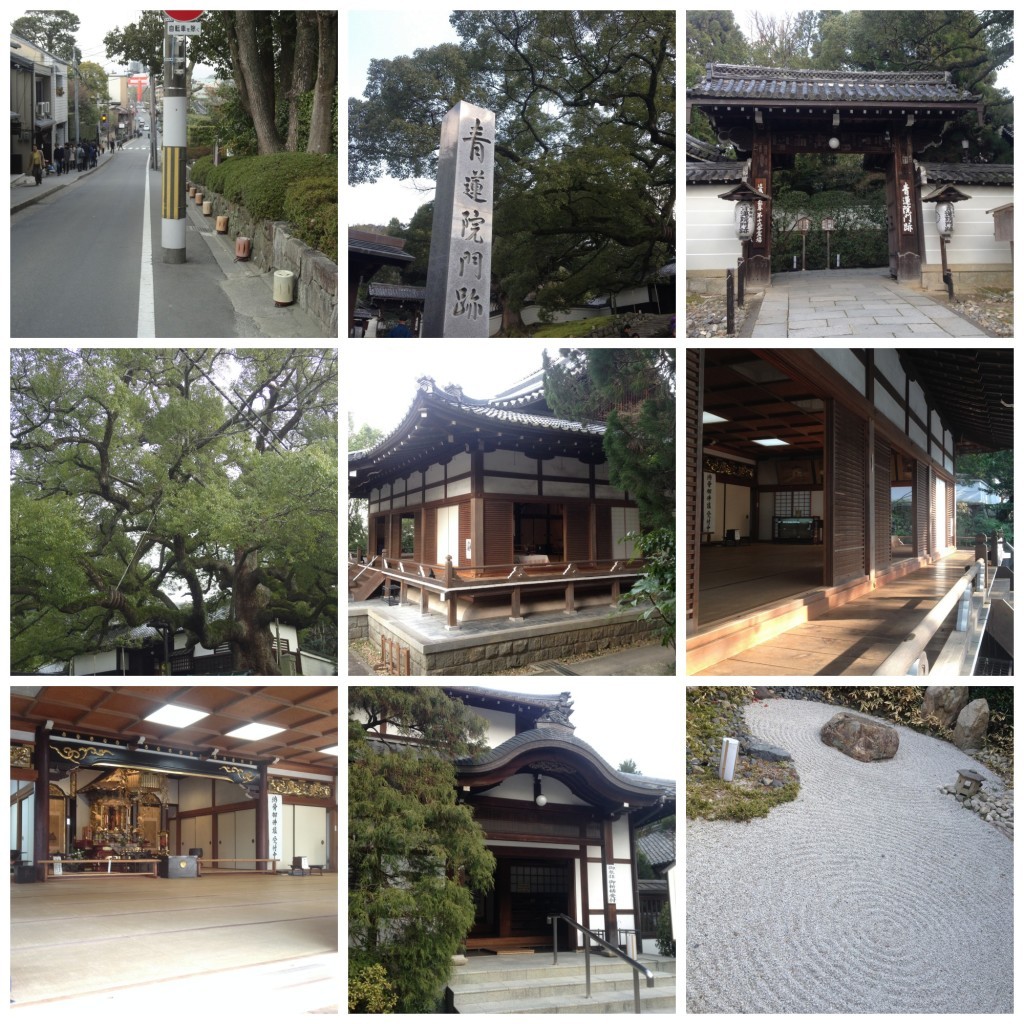 On the way, we passed this cherry blossom tree before the Chion-in Temple which is next on the left.

To reach the Chion-in Temple you must walk many steps to the top but it is worth it. There are very nice buildings with lots of character, however, the main part, the Miedo Hall is under restoration and is covered as you can see in the top right photo but this still does not disappoint as there is still lots to see at Chionin Temple in the Higashiyama area of Kyoto 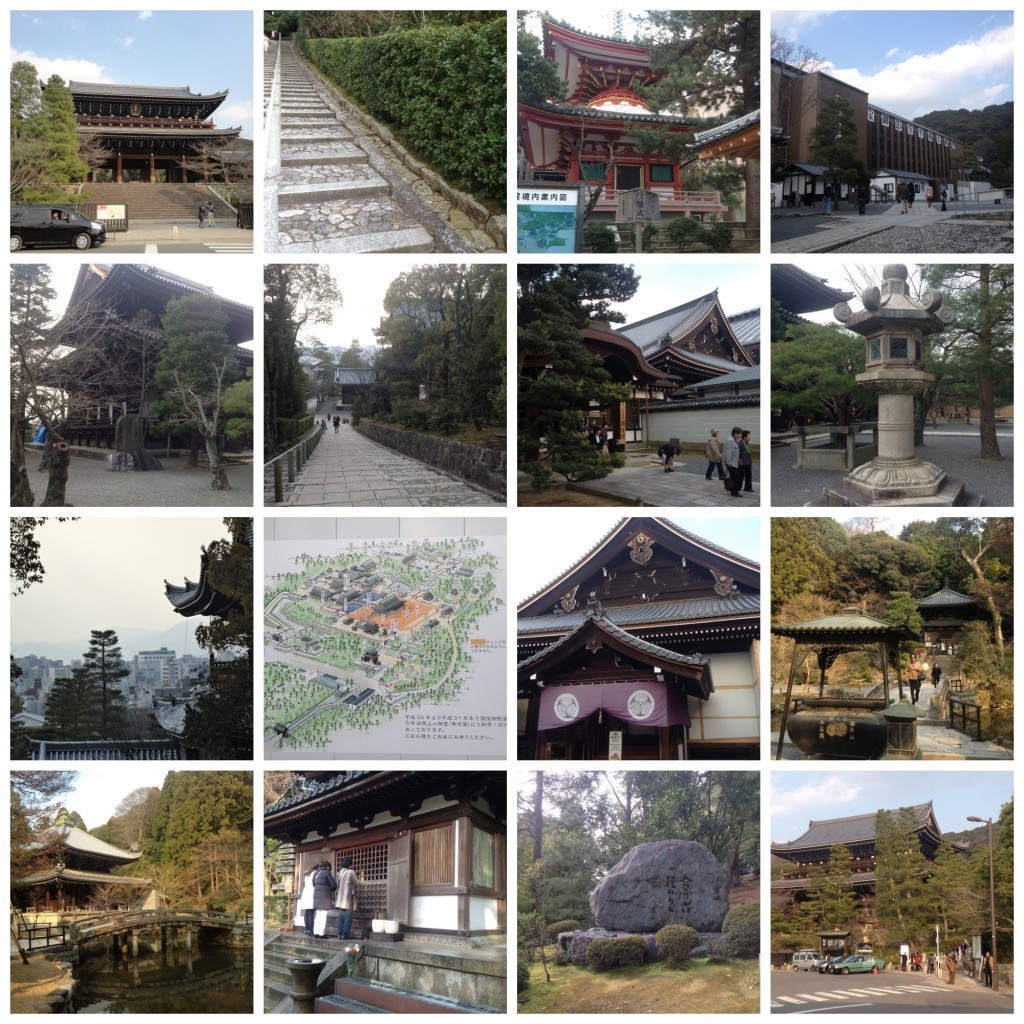 Images from the Chion-in temple

“Next up was the Maruyama Park”

We bypassed the Yasaka shrine on the right as we arrived at the Maruyama Park where we took the time to stroll around. There were people everywhere, we spotted the odd cherry blossom of the early blooming variety from the famous weeping trees that always draws a crowd. The weather was great, not too cold from any biting wind and no rain, in fact just perfect.

The sun was slowly setting and as we moved on walking up and down the small alleyways with lanterns lining the edge still unlit as it was not dark enough, yet all very picturesque. 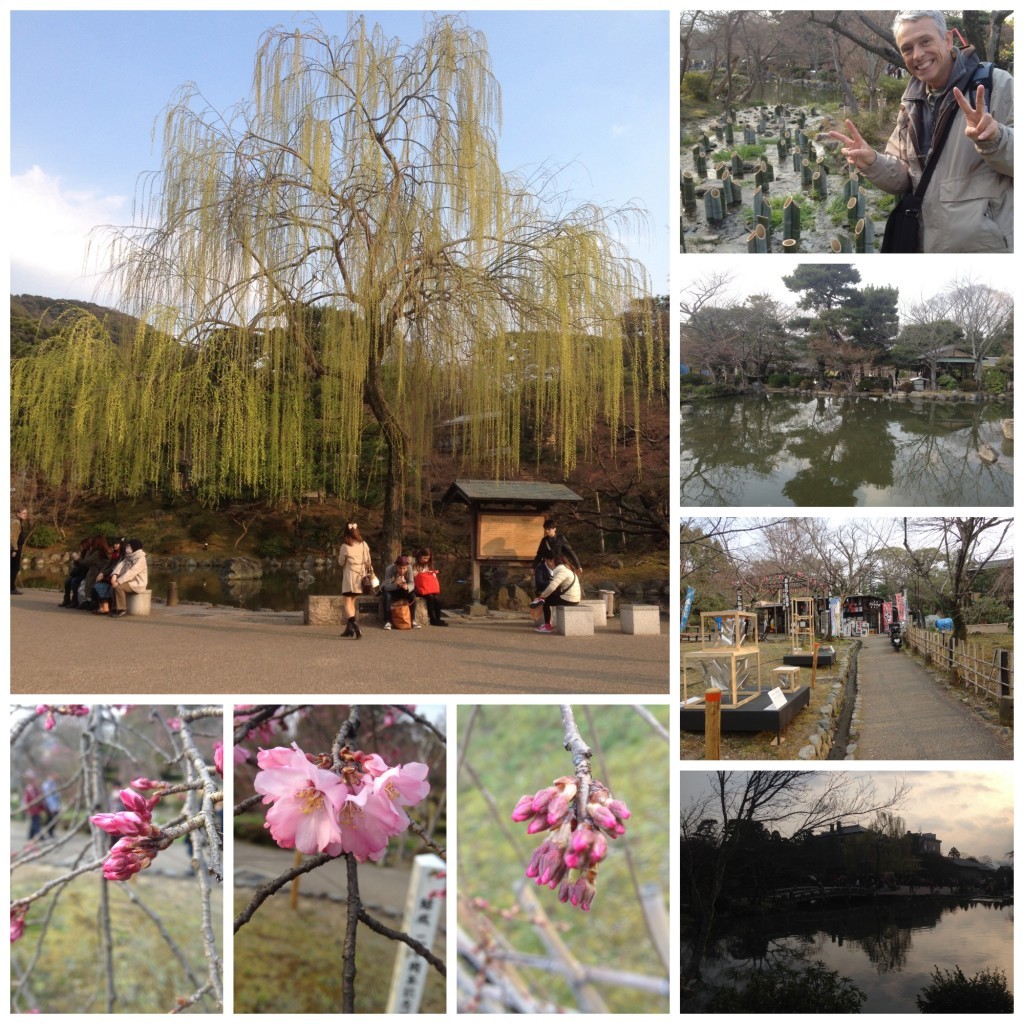 We passed the rickshaws with their runners and tried a Japanese sweet, a green dough thing with bean paste filling. A very sweet item not sure what to call it, though.

“Onwards and upwards to the Kodaiji Temple”

we walked, passing many shops with local fare, fans, and chopsticks onto the Kodaiji Temple where a man was ringing a huge bell which harmoniously sounded out around the area. 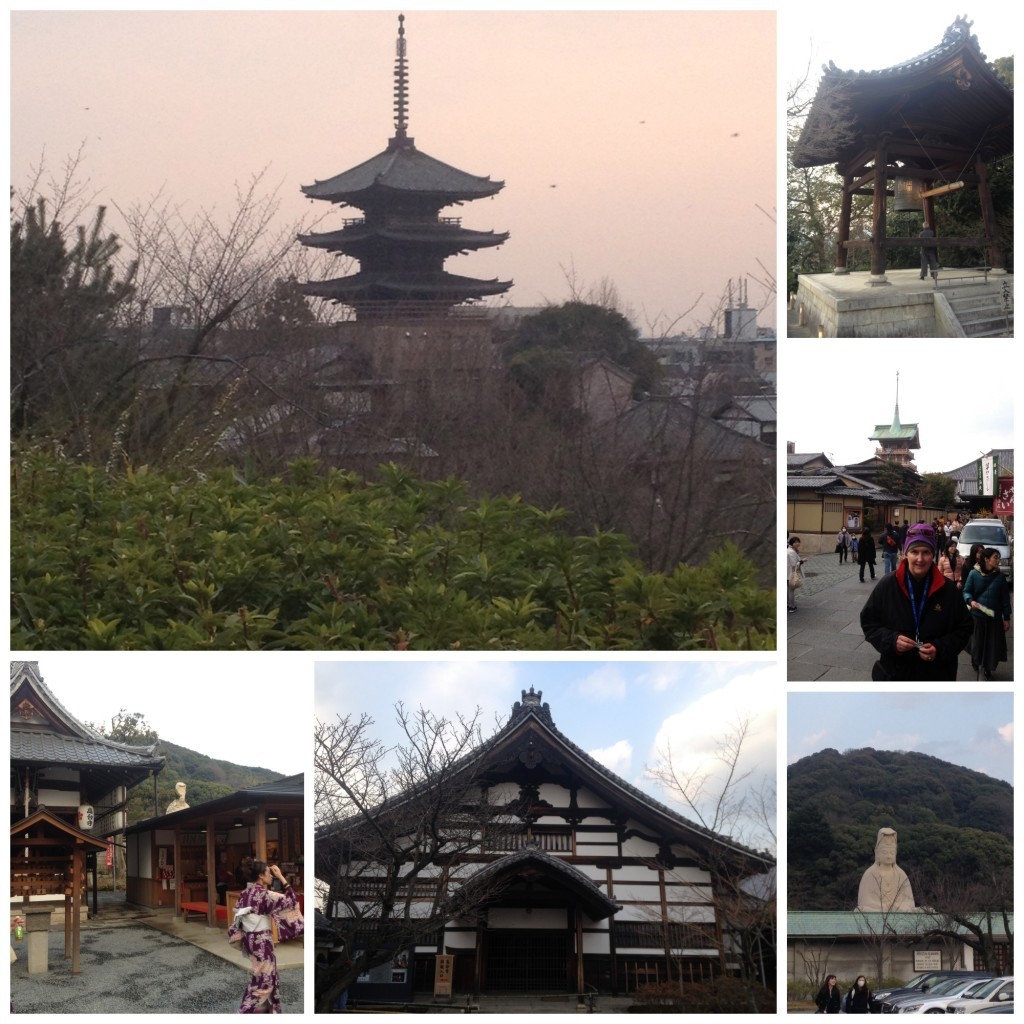 The small roads turn left and right like a maze which is very picturesque and finally we spotted what looked like a cafe with a real coffee machine, we went in for a cuppa. The coffee was not too bad, which I’m pleased to report especially as it cost $12…wow. 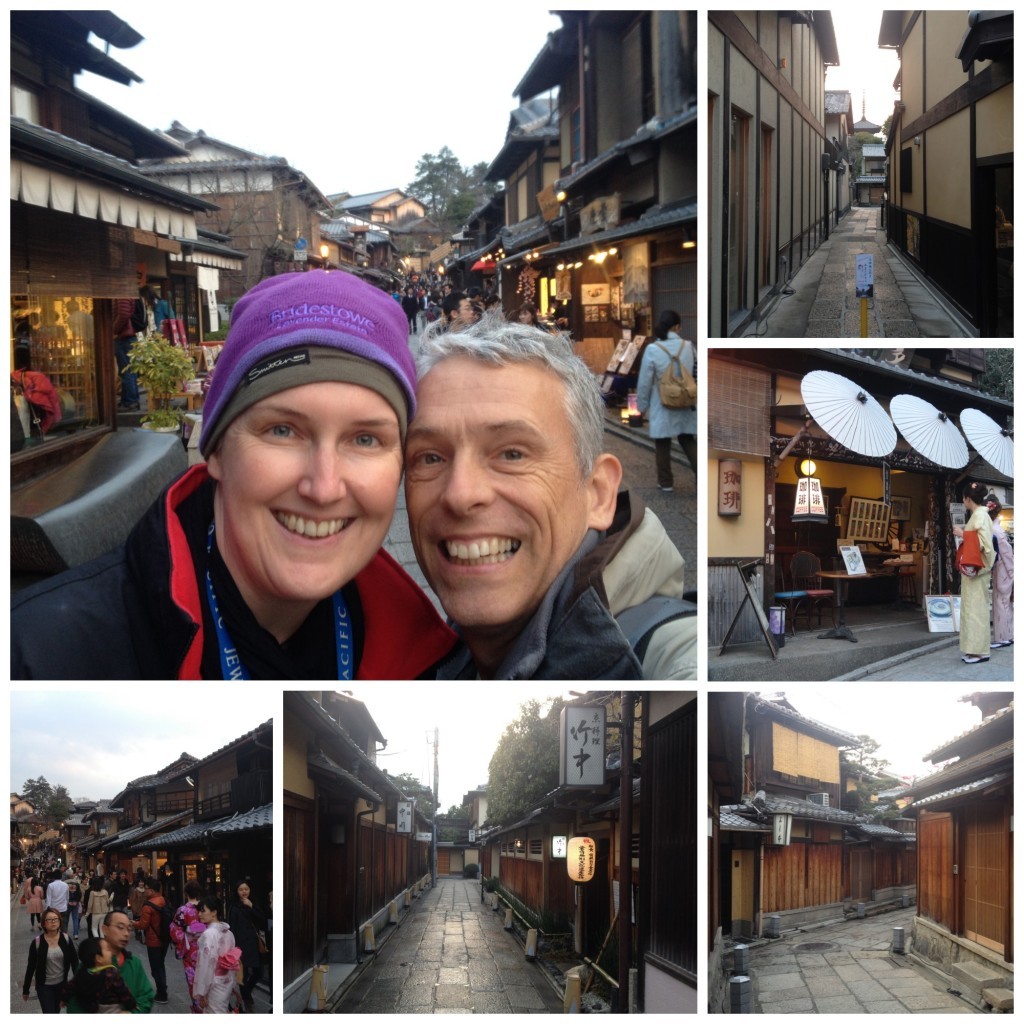 Images from the Higashiyama District

By the time we finished savouring our coffees it was dark enough that the lanterns had come on. The streets were all lit up and glow as the darkness deepened. Our trek headed up hill still passing shop after shop or small eatery to where some loud music was playing and a couple of younger Japanese were spinning juggling stuff, we didn’t stop, having no interest in that sort of thing, plus it was somewhat out of place in front of an entrance to such an impressive temple, rather strange.

Illuminations in the streets with the famous blue beam from Kiyomizudera

Entrance here costs 400 Yen each. After you pay you then climb the steps to enter. It’s all lit up attractively and we joined the back of a queue that eventually takes you to another cashier who collects another 100 Yen each, we took off our shoes and just followed others… down some steps into pure darkness… the darkness continues as we made our way around just walking slowly holding on to the rope to our left…

Finally, we came across a spinning porcelain wheel which was slightly illuminated, we gave it our spin and then continued on the path and eventually we made it out to the evening lights again. It must be like some sort of pilgrimage to do that and add your prayers or wishes for the future.

After putting our shoes back on we walked to the balcony of Kiyomizudera. It is just like the photos portray and very picturesque. Taking our photographic memories we continued around the temple. The walk passes a few statues and other rooms before we head out to the exit walk which offers you a great view back towards the balcony for the magazine photo.

The lights of Kyoto can be seen very well from here. The path leads you down and eventually back to the entrance area and onto the road that took us to our bus stop. 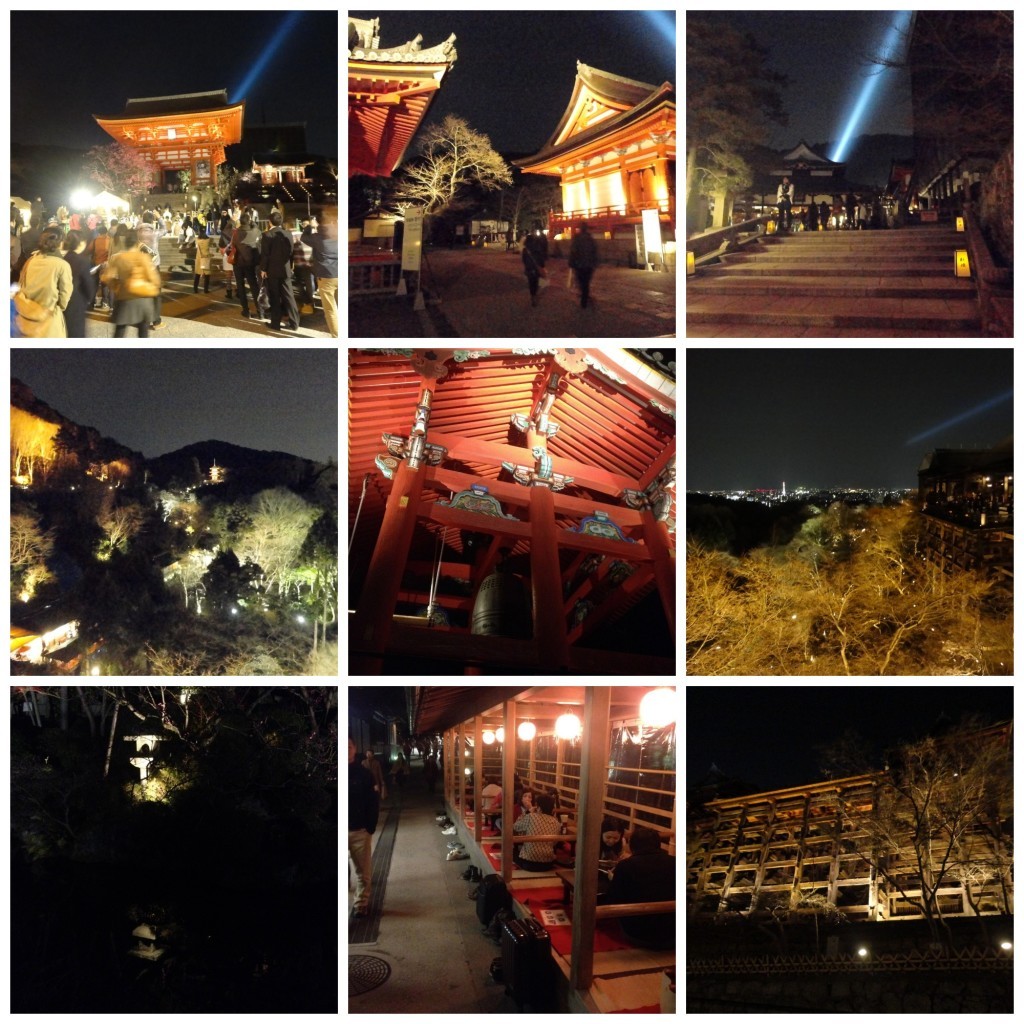 There are naturally plenty of people waiting for the buses. Lucky they come very frequent, the only thing is that they are all jam packed. There are two bus employees that are each at the front and rear of the line. The front one helps people get on and waves the bus off when full. He said in Japanese, after the first two busses that we watched stop that we could be here a long time as all buses are very busy and probably only two by two we could get on.

How did I know this, well it’s what my intuition told me and I had confirmation from two young boys behind us who spoke enough English. As soon as the man said that, people started to stop taxis and the line began to reduce. Then a bus going to another place came and so from what was going to be a long wait was suddenly no wait at all and we were first in line… happy days.

From the bus stop to Kyoto station

If only the next part of our journey home went so well… At the Kyoto station we got the train to Osaka, then we got the wrong train which was the loop train, after two stops we got off and had to go back, but that train didn’t stop at the stop we wanted either, so we got off again, next we changed platform and headed back to Osaka to eventually catch the right train. So a 15-minute ride took us over an hour… Home to bed, very tired.

WOW, this has been a long post which has taken me some time to add the photos, having so many makes it hard to pick the best ones.