Miami skyline from our balcony

“Miami Back to Back Caribbean Cruise”

Heading up the channel with the sun rising behind us I could see three ships already docked.

Cruising in to Miami

It is amazing how the officers and harbour pilot manoeuver these huge ships in to very small spaces, the Splendor docked just in front of another ship with ease.

Parking a ship in Miami

We arrived alongside in Miami at 7am, and having packed up our stuff the night before it was just a matter of transferring it all to the new cabin. Outside the door was a trolley for us to use for moving our bags. Not sure why I didn’t take a photo, I do everything else!!

After a breakfast in the dinning room we loaded the trolley and around 9am we moved our gear to the new cabin on deck 10 #1075. The cabin steward was still getting it ready but he helped move our belongings in while we went back to get the final items.

The transfer was easy and we had it done in half an hour with all the clothes re-hung.

“Cruising B2B or Back to Back”

At 9.45am all B2B (back to back) guests had to meet in the lobby and be checked off before being escorted off the ship down to passport control and then back on. There was about 50 B2B guests.

We had to wait until all the disembarking passengers had disembarked which took a while but eventually at around 10.30am we made the walk off (and then back on). The only thing that immigration did was collect our declaration form and look twice at each of us, no passport swipe nothing. So really it is just a waste of time. The ship had reset the check-in machines and we scanned the cruise card with new photos taken and back on board we were.

A glass of complimentary bubbly (or two, just have to ask) and then a B2B group photo before the first of the new passengers started to board. Back up to our cabin which was all cleaned and ready, even though the main doors were closed.

This is our new cabin which is the same as the other except on the other side (starboard).

Another cabin on Carnival Splendor 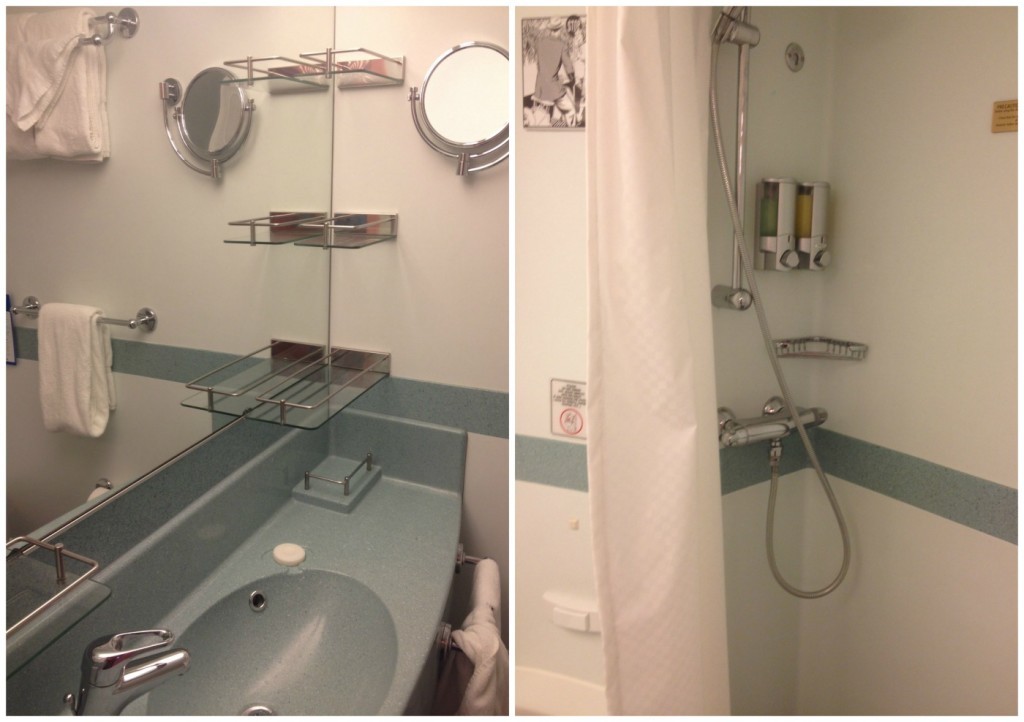 Next up we had lunch at the buffet as the main dining room was closed, which was very tasty and Moni enjoyed the cocktail of the day.

Moni had some peaceful reading time while I had some fun. As you can see, the main pool was having a facelift, and was out of action the whole day… Imagine how that went down with all those families.

Lucky for me the slide and pool were open and I could get some time to enjoy them in peace before the 900 kids board and take over.

It was nice and quiet for my hour or so fun in the pool, I was first on the slide today and for a long time the only one.

Most people who board, have no access to their cabin until after 1.30pm and have no swimmers. A good point to note is pack your swimmers in your day bag as the pools are at their quietest and you can enjoy them best, that’s if you want to swim as soon as you board.

About two hours later they were full of kids!! Especially as the main pool was being beautified (painted). The funnels stared smoking as the main engines kicked in getting ready to sail.

At 3.30pm we had the compulsory lifeboat emergency drill (same procedure as last time) and then it was sail away time. We then enjoyed some time on our balcony with the view to the other side of Miami.

“Leaving Miami cruising down the channel”

We didn’t leave until after 5pm and the sun was setting behind thick clouds. Having not turned around in the morning meant we had to, there is plenty of room and the ships make light work of it.

After the turn we cruised up the channel passing other ships and out to the ocean.

This is a very nice channel to cruise out and probably even more exciting for those living near as they get to see these magnificent ships come and go nearly every day.

Cruising out of Miami

The temperature was warm and soon the lights of Miami were fading into the distance.

Back to our cabin to get ready for dinner. On the table was a fruit basket and a bottle of brut bubbly, compliments of the Hotel director, I think for doing a B2B cruise with Carnival, it only said compliments from the Hotel Director. 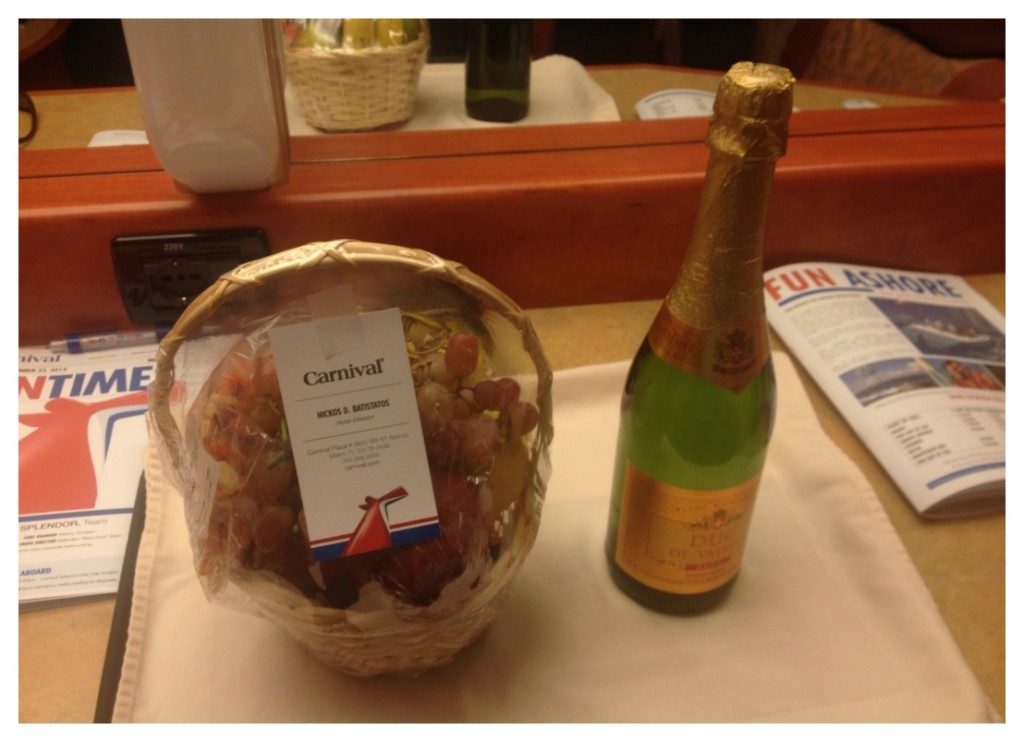 A welcome back gift from the Hotel Director

A nice touch for those doing a B2B cruise anyway.

After speaking with the Maitre’d yesterday, trying to get a table on the lower level of the Golden Pearl dining room, apparently there was no space for a sharing table as lots of groups and large families are on this Thanksgiving cruise.

Moni asked about ‘free time’ dining the quick thinker that she is and they wrote an invitation that allows us anytime dining. Tonight at 7pm we headed to the Black Pearl dining room which is where those on anytime dining can eat.

It has the exact same menu just in a different dining room. Basically there are two dining rooms either side of the galley on this ship, which is the reason why, on floors 4 & 5 you can’t walk through and have to either go up or down and across to bypass this area.

It’s a pain really as you almost have to walk through the smoke-filled casino area, unless you go up one more level and across.

Dinner was nice and yes it was the same menu as last week. Funny thing was that even at anytime dining there were no share tables at this time, at 5.45 there was, but at 7pm no more. 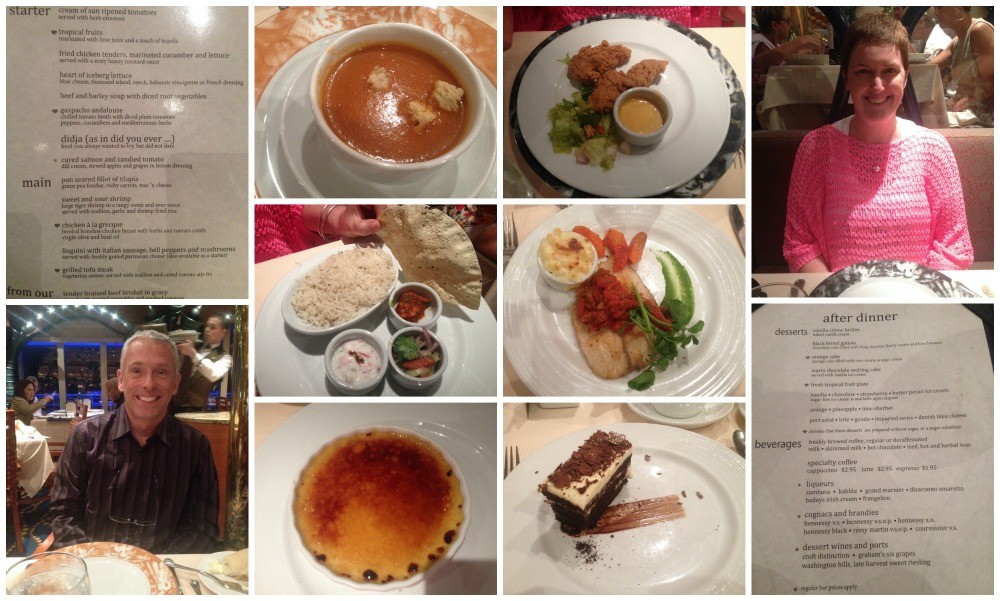 Diner in the Black Pearl on Carnival Splendor

At breakfast yesterday we got talking to a couple about how they enjoyed the cruise etc and they mentioned that they had a great waiter at ‘anytime’ dining and he was excellent remembering all their table names, giving awesome service etc.

We made a note of his name and wanted to ask about a table in his section but forgot, funny thing was that when our waiter introduced himself it was ‘Nenad’ the waiter we had been talking about that morning.

Wonderful how things work out when you set the intentions… Suffice to say that he was great and called us by our name instantly and his service was top-notch. Never had to ask for a thing. As I write this, we had breakfast today with our waiter from last week and she still didn’t address either of us by our name, not even sure see recognised us!! I guess that it’s the luck of the draw.

Back in our cabin yet another animal creation from towels, can you guess what it is? 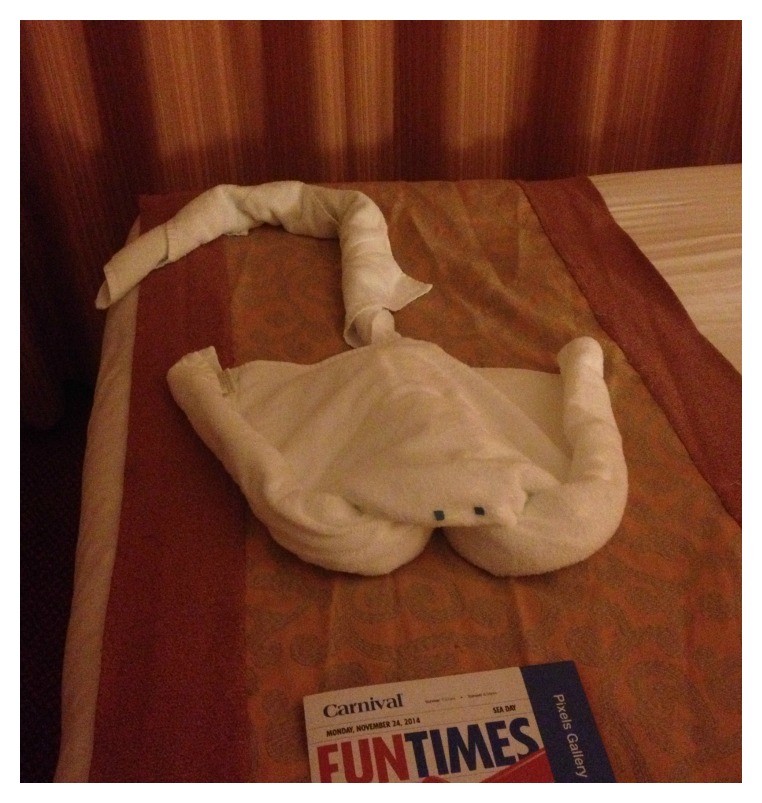