This is a first for us flying on a ‘Red Eye’ flight. I hope it goes better than Jodie Fosters in the movie Red Eye… The flight was a good, even though I couldn’t sleep which was a bugger as that is normally not the case for me, I can sleep anywhere as a rule, so not sure what was up, maybe the snickers chocolate bar I ate at midnight!!

Well you will be pleased to know that check in was definitely a lot smoother and less stressful than checking in for United flight in Portland.

How the day unfolded…

The Summit Express shuttle picked us up on time, he arrived just as we were exiting the Gateway building for the last time, having packed up without any hassle this morning.

After picking up a few more people we made our way slowly to Denver International Airport. An accident on the interstate caused serious delays which for us was not an issue as we had around 10 hours to spare.

We finally made it, the next wait was for check-in. The lady at the entrance to check-in told us that we could only “check in” 8 hours before a flight, so we sat and waited just over an hour before we joined the queue and made our way to the check-in console, similar to Portland, but these consoles all worked and behind each one was a capable service person.

All was going good, bags paid for receipt in hand… But no boarding passes!! The service lady said that the machine can only deal with flights up to 6 hours in advance, WTF…

She said the first person gave us the wrong info and the machines don’t lie. So we took our paid for baggage and got a quick sandwich and coffee as by now we were hungry.

Around 6.30pm we actually checked in with ease and can finally relax. A couple of beers and something not so healthy to eat behind us we then tackle the security.

Everything out of your pockets, shoes off, stand on the yellow markers arms above your head. Pass on through sir…

Looking down to security at Denver International Airport

Once you clear security at Denver International Airport and travel by train to your respective gate, you notice that the airport is big and has plenty of open space where you could sit in quiet or even lay down on the floor. 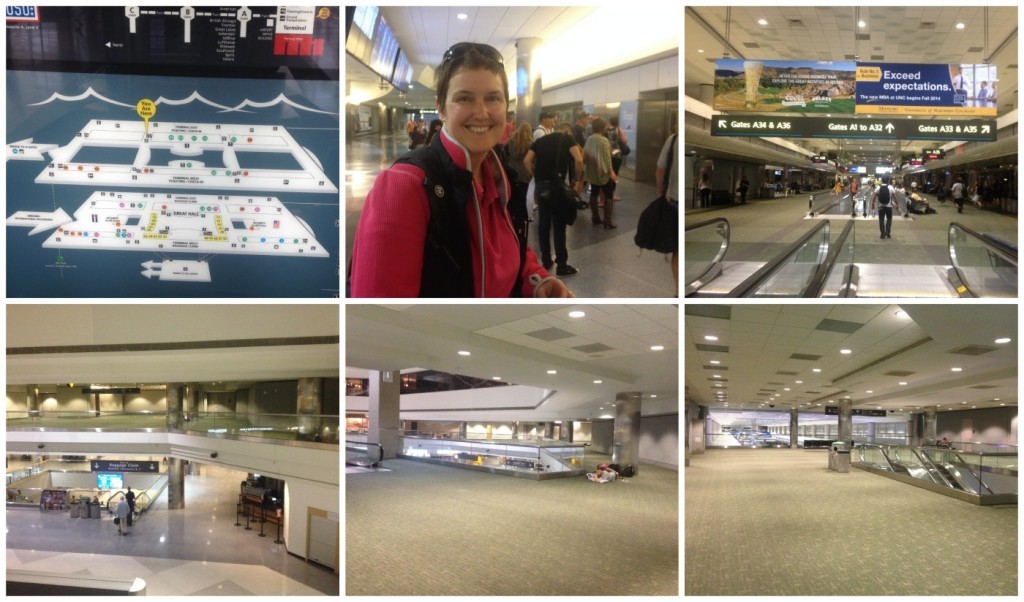 Plenty of space at Denver Airport

“The biggest thing that people want at an airport is not food or drinks it is power, electricity to plug in”

Getting powered up at the airport

The plane arrives and people get off and soon our flight is called. On to the plane which is totally full, nice fake leather seats all be-it very tight with the narrowest isle ever.

“We push away dead on 11.59pm and are soon racing down the runway”

As I said earlier, I couldn’t sleep, but Moni did for almost all of the flight which was good. Three and a half hours later we land in Fort Lauderdale it’s 5.30am local time. An easy baggage claim and then we grab a taxi to our Travelodge motel on Ocean Boulevard, one road from the beach.

Check-in time was not until 2pm as per normal, but after waiting an hour to be served at the front desk (due to no staff) we can check-in to our room.

Moni had a call at 8am and after that we slept…

Shutlle Service From Denver West to the Airport to...
Portland Airport Check-in Sucks