Even after a late night we are up early and ready for some more sight seeing in Hirado, and Toshi’s friend meets us at Big Elle to play tour guide this morning.

Hirado port is very beautiful and quiet, while Guchi is cleaning a fresh fish a Kestrel swooped in to take some of the guts and fish rests that has been discarded into the water, I was just lucky enough to see it coming. 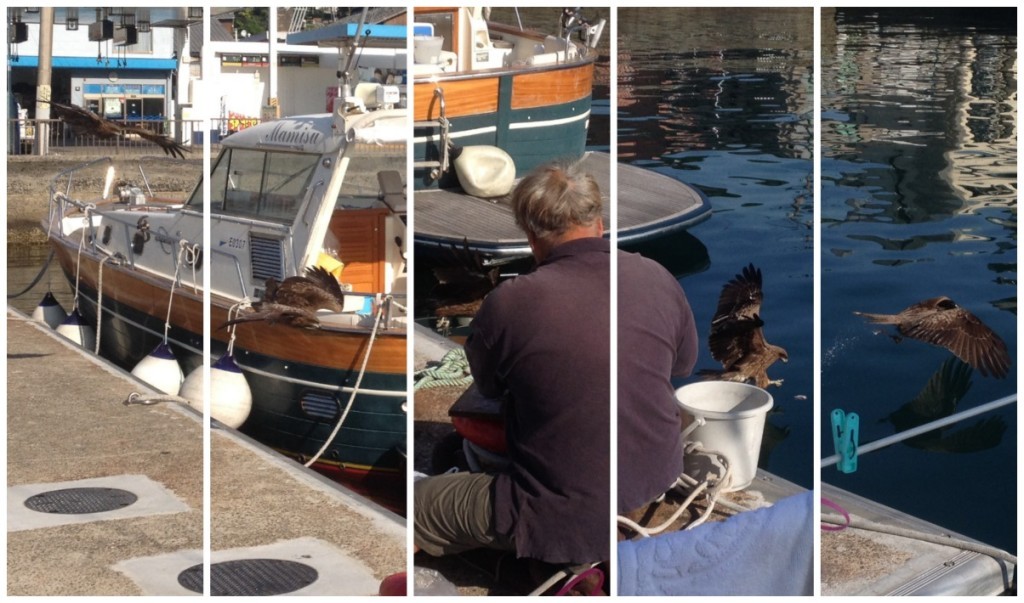 The tour begins at Big Elle and off we go for a morning of sight seeing. 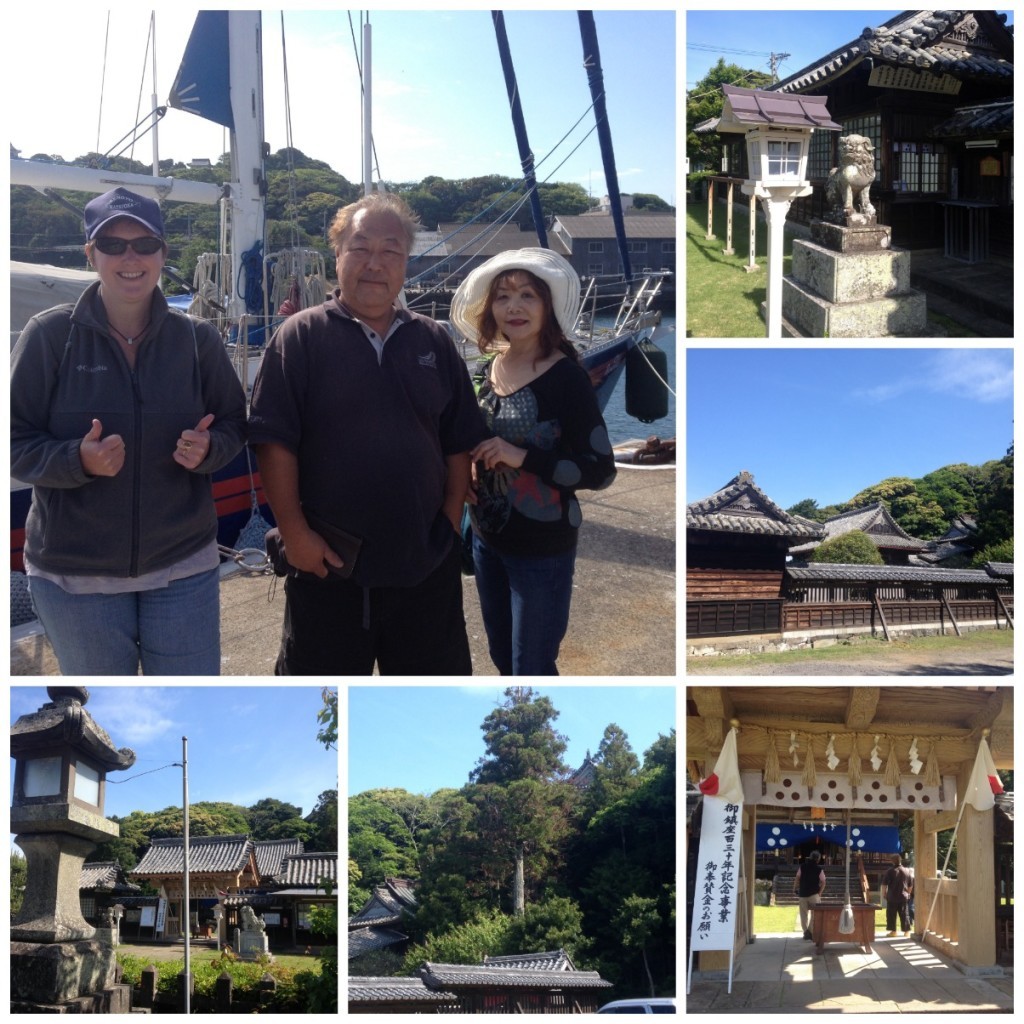 Toshi’s friend of over 50 years from school days

First up we visit a museum near to Hirado Castle before entering the castle where we get to actually hold a real gun from many centuries ago, quite unreal really, not that my photo shows any respect… Sorry. The castle was built in 1599 but it was destroyed in 1613 by a fire.

In 1704 the reconstruction began with permission of the Tokugawa Shogunate and it took 15 years to build.

On many of the floors are historical artefacts on display, very interesting especially if you’re Japanese. Like most of the other castles we have seen, they all tend to have these displays of history some where you can take photos others not. 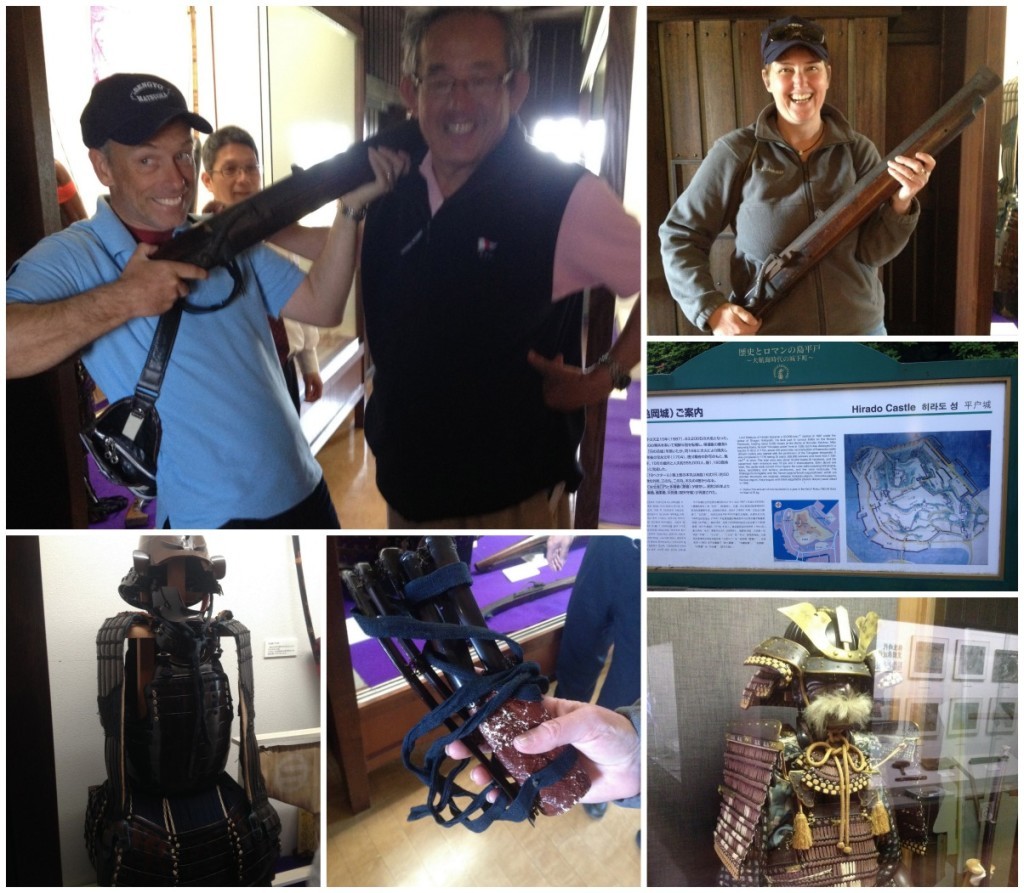 Hirado castle is not one of the biggest but it is one that has some awesome views from the top especially as it is situated on the close edge to the water. 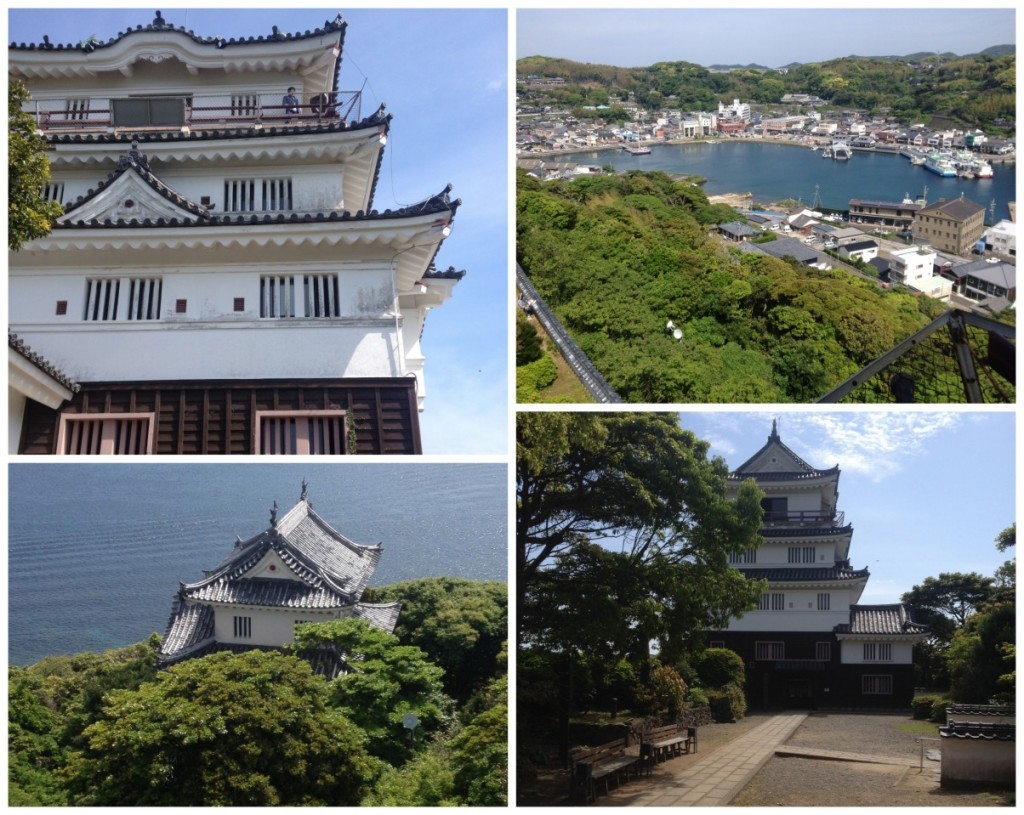 After the visit to Hirado Castle we make our way to Matsura Historical Museum for our next tour. Inside here we can view lots of Japanese historic and traditional fare. 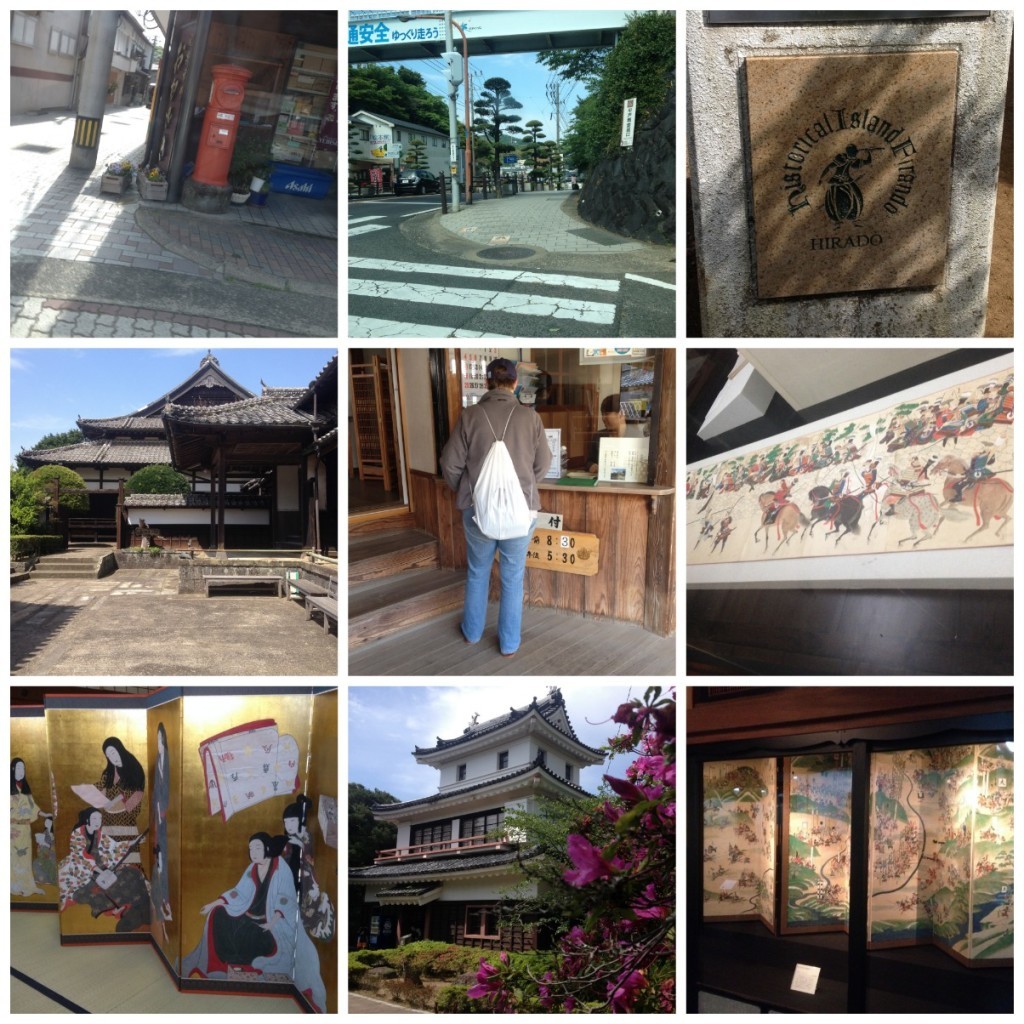 More images from inside the Matsura Historical Museum. 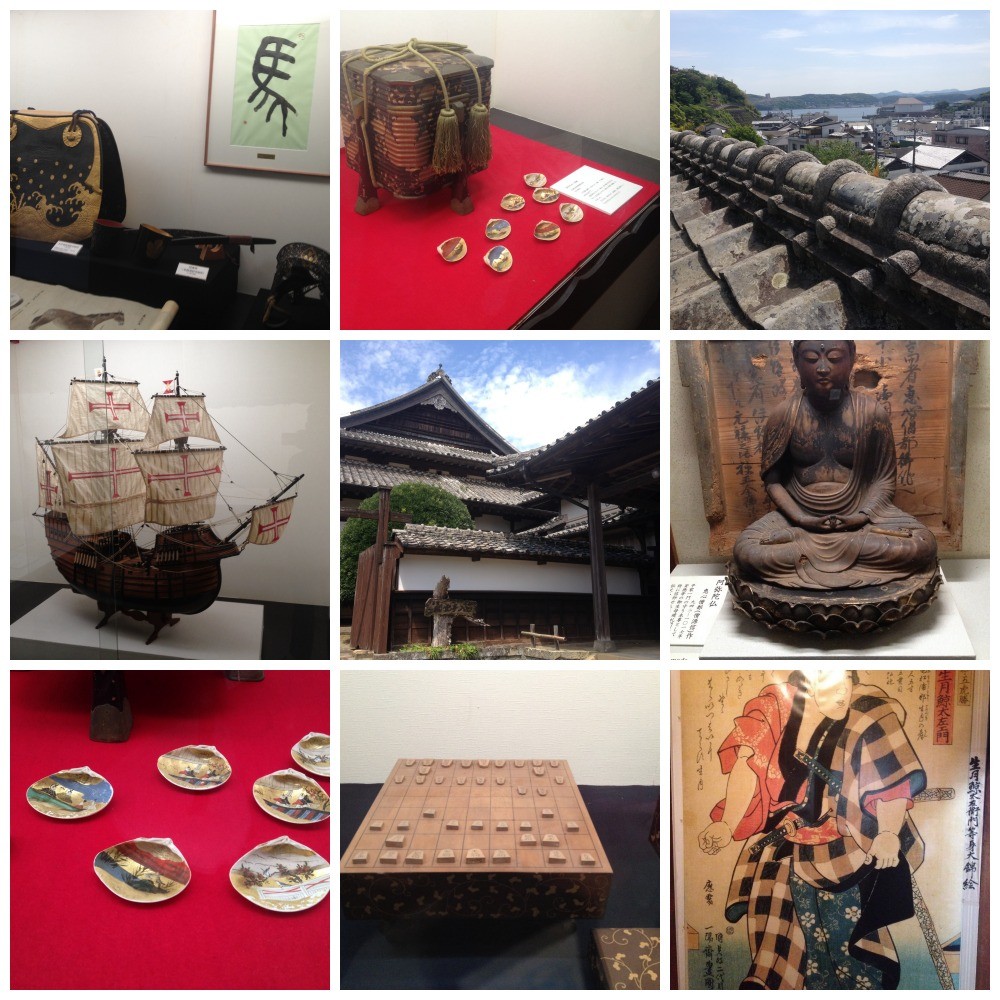 Hirado and the Matsura Museum

After the tour we must say goodbye to Hirado and Toshi’s great friend and thank her for taking the time to show us around.

Shortly after departing Hirado we have lunch, fried noodles and prawns with a few other delights. Also as it is Boys & Girls day in the Golden Week celebrations Yumi had bought a few of the traditional food items associated with this day, Moni & I try them. 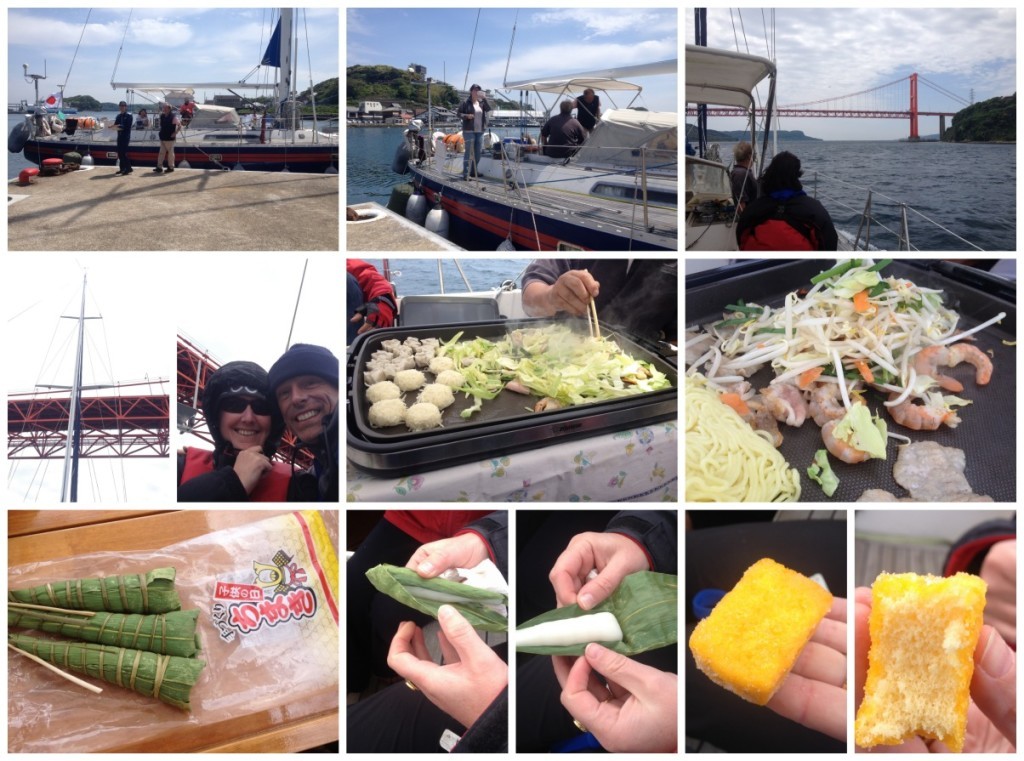 The sailing to Arikawa was quite smooth and we arrive at the port greeted by two of Toshi’s great friends, we don our hats that Captain gave us to where especially when arrive here. Arikawa Port Terminal is in the shape of a whale, can you recognise it.

We couldn’t pass up the chance to climb on a whale at the Arikawa Port Terminal. 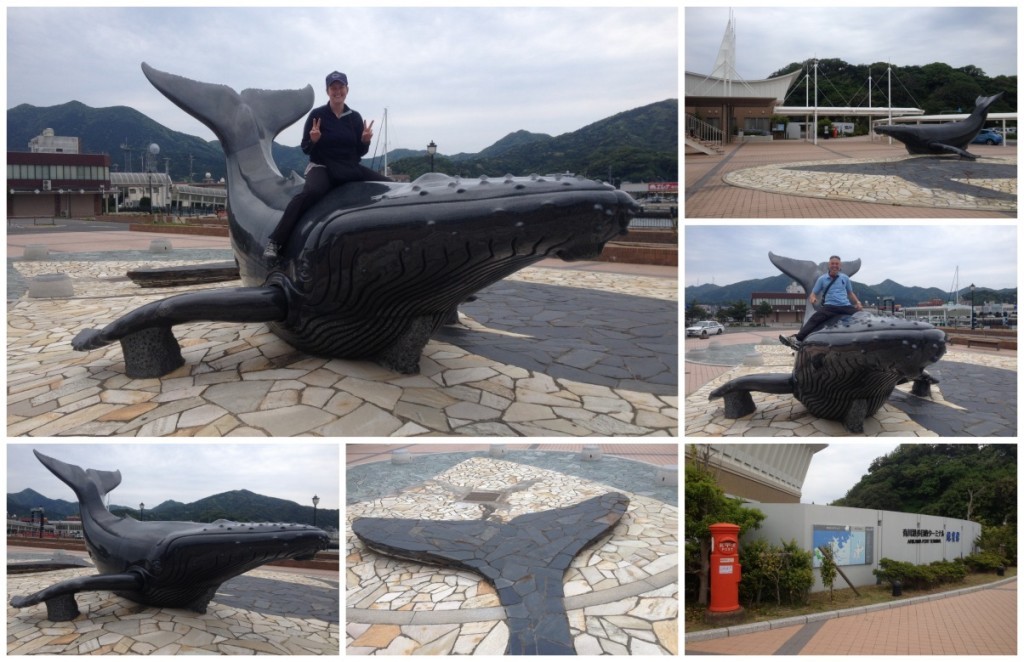 Later that afternoon we were picked up at the port and taken to Toshi’s friends Ryokan (Maeda inn), where we first had a bath then enjoyed a lavish dinner, at which Moni & I were the most important guests and so sat at the head of the table. Such an honour one can hardly explain what that means in Japan. 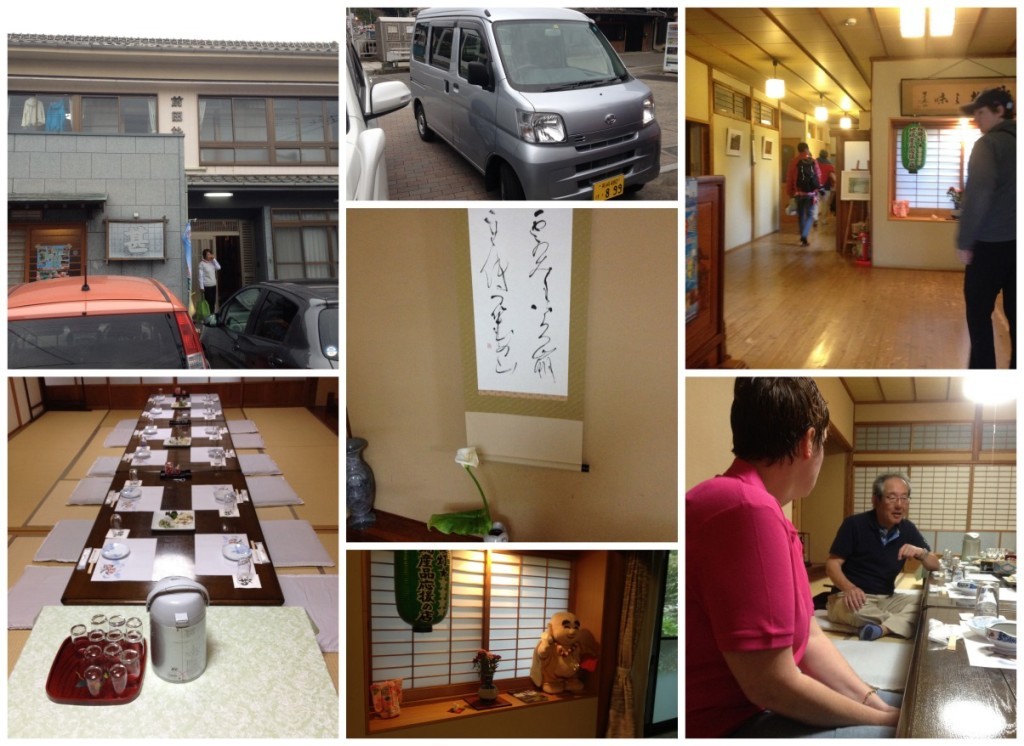 As you can see this dinner was more than just a normal meal, we had lobster sashimi, ghost whale (whale meat), and many other dishes. 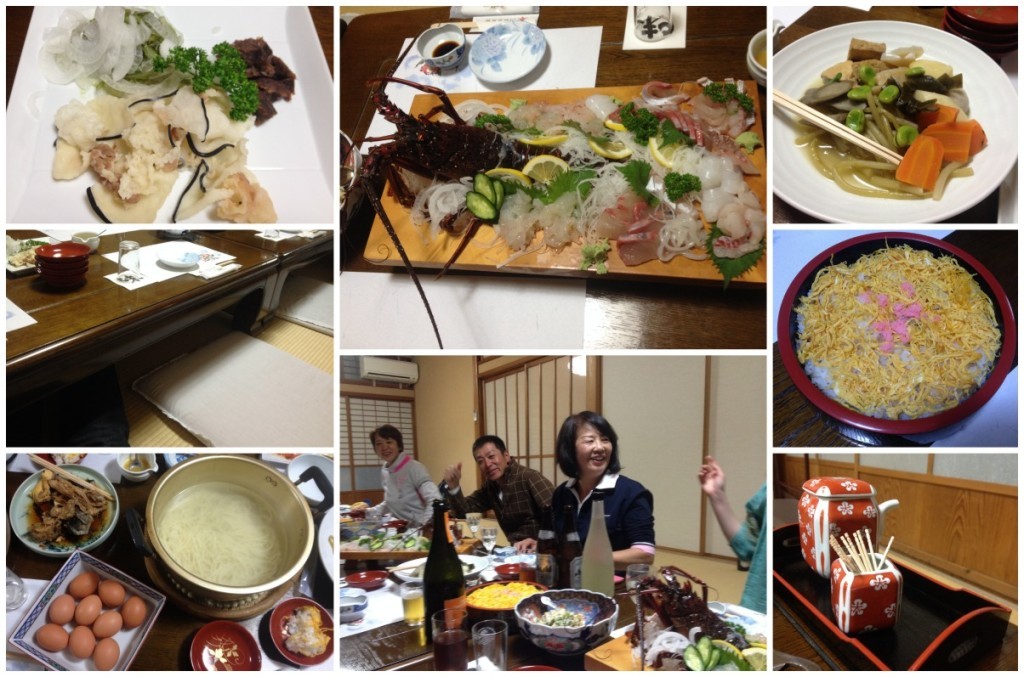 At one stage durring dinner the owner of the Ryokan came and gifted Moni a loaf of bread, but no ordinary bread, it was a “kugelhopf” Zopf style bread and very nice it was, we actually had two of them. Also she gifted us some home made marmalade. We had tears in our eyes at this moment and so did a few others, it was very emotional, a time we will again never forget. 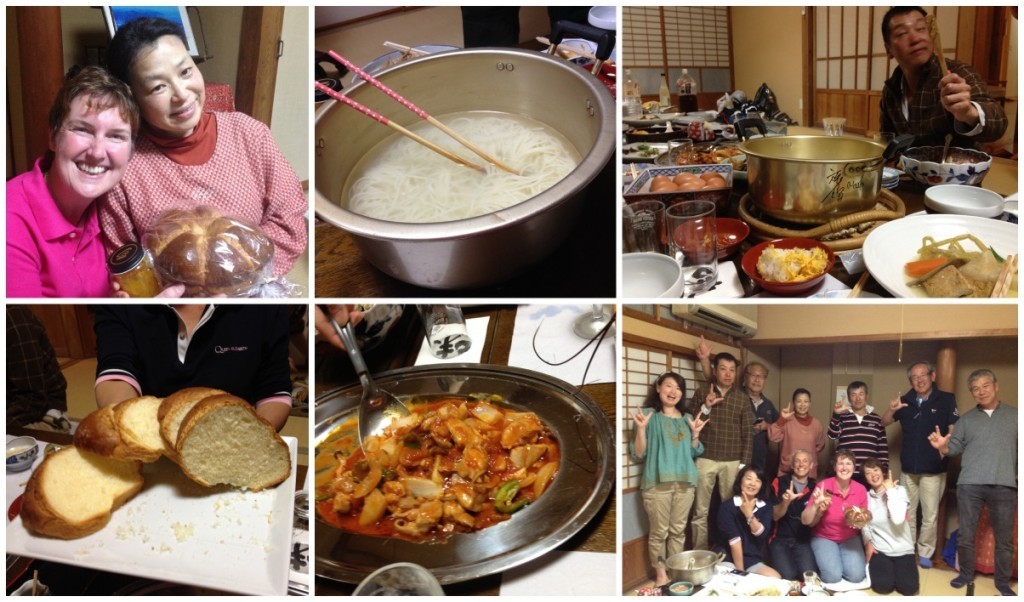 After this amazing dinner and evening experience we were taken back to Big Elle. Thank you all so very much. Read more about this wonderful evening on Toshi’s Big Elle Blog Oshima to Hirado With a Brief Stop at Yobuko.