This morning we say goodbye to Mrs Také, who returns to Osaka today, Také is a lovely lady and we shared many funny moments together, looking forward to seeing her again in the future.

Saying goodbye to Také before we depart from Oshima and head to Hirado, we have just under 60 nautical miles to travel. 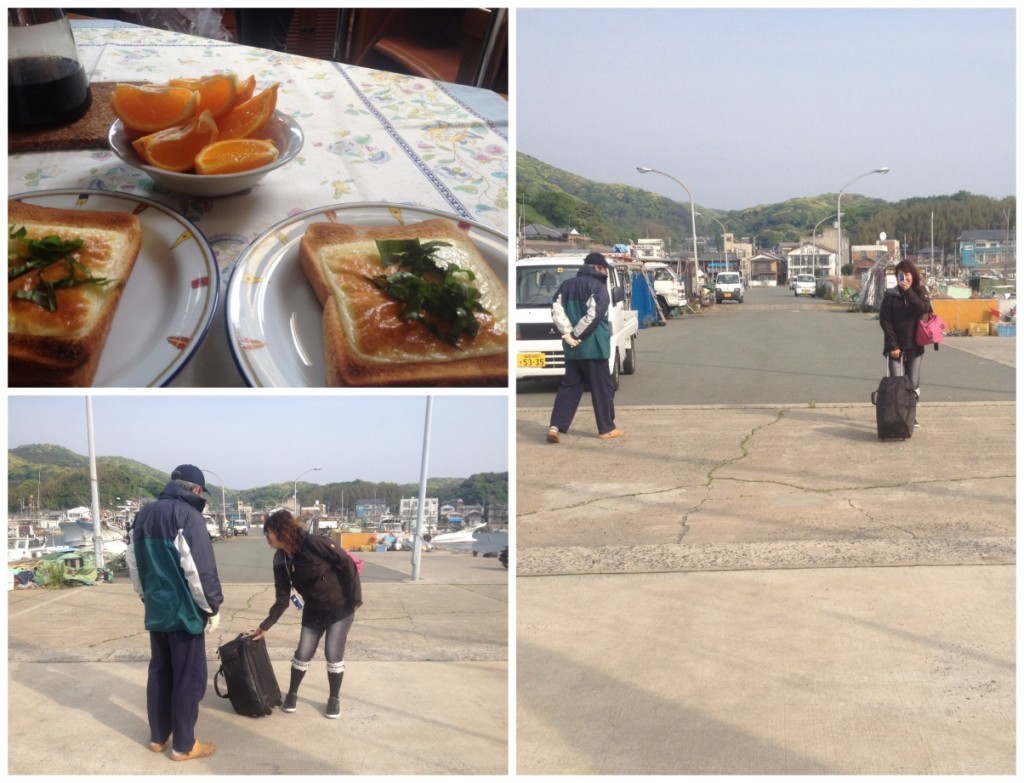 Breakfast before saying goodbye to Také

Breakfast was very tasty cheese on toast with fresh basil, I could have eaten five of them for sure they were that yummy.

The day started just like yesterday with a continuation of barrage from waves caused by a swell. 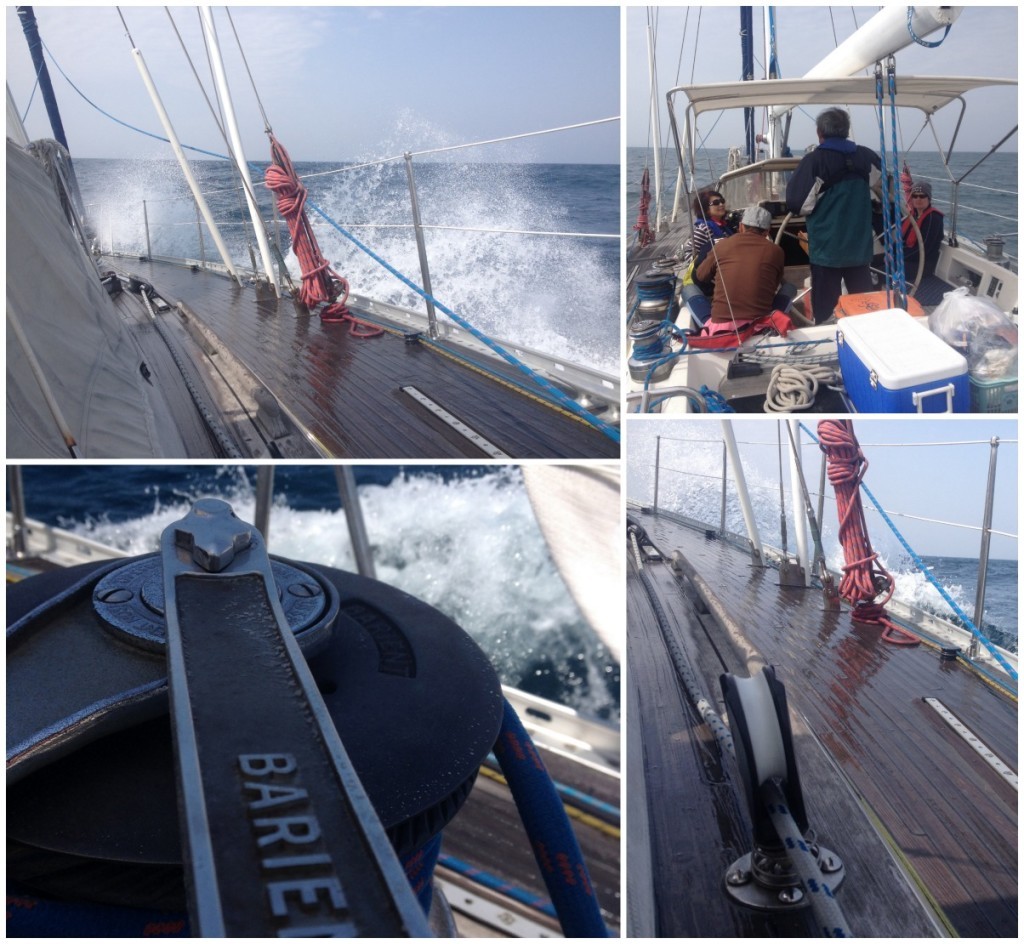 Thankfully it calmed down after about an hour and was reasonably smooth sailing from then. That gave Captain the opportunity to allow Moni to take the helm of Big Elle and guide us to very near the destination, well done to Moni as she did an awesome job keeping course and watching out for obstacles. 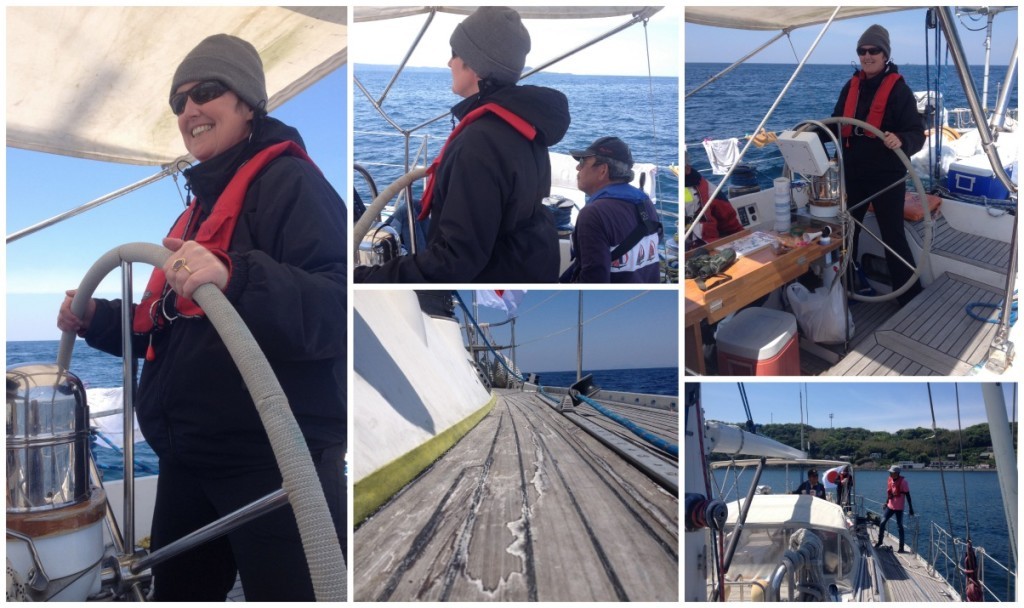 With the calmer waters around Tom managed to get some shut eye before we reached Yobuko, the island famous for its squid. 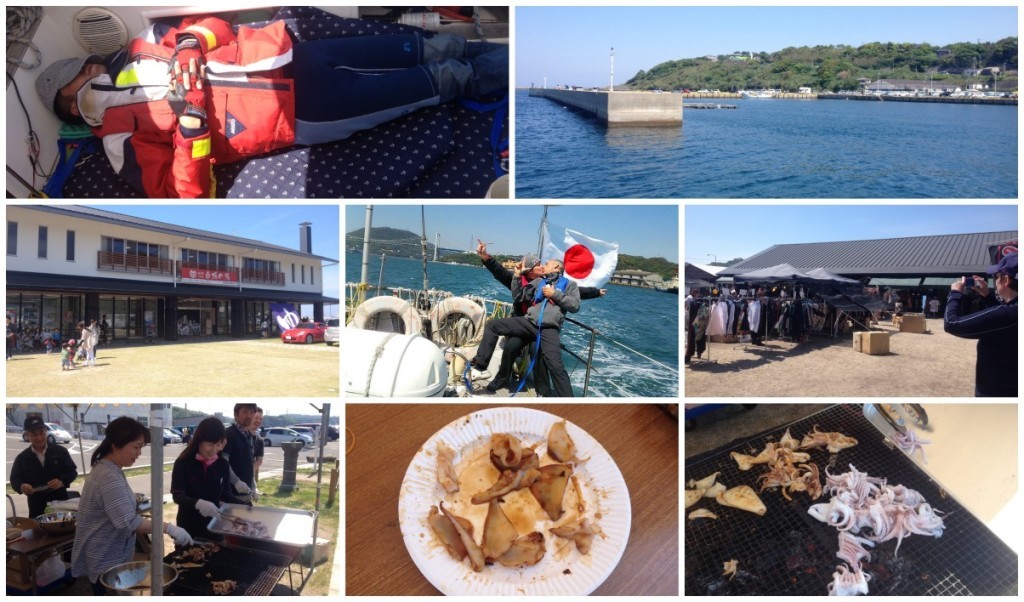 The Yobuko squid are clear, long and thin. At the market come shop here they sold many fish and seafood items and we purchased some for our lunch. 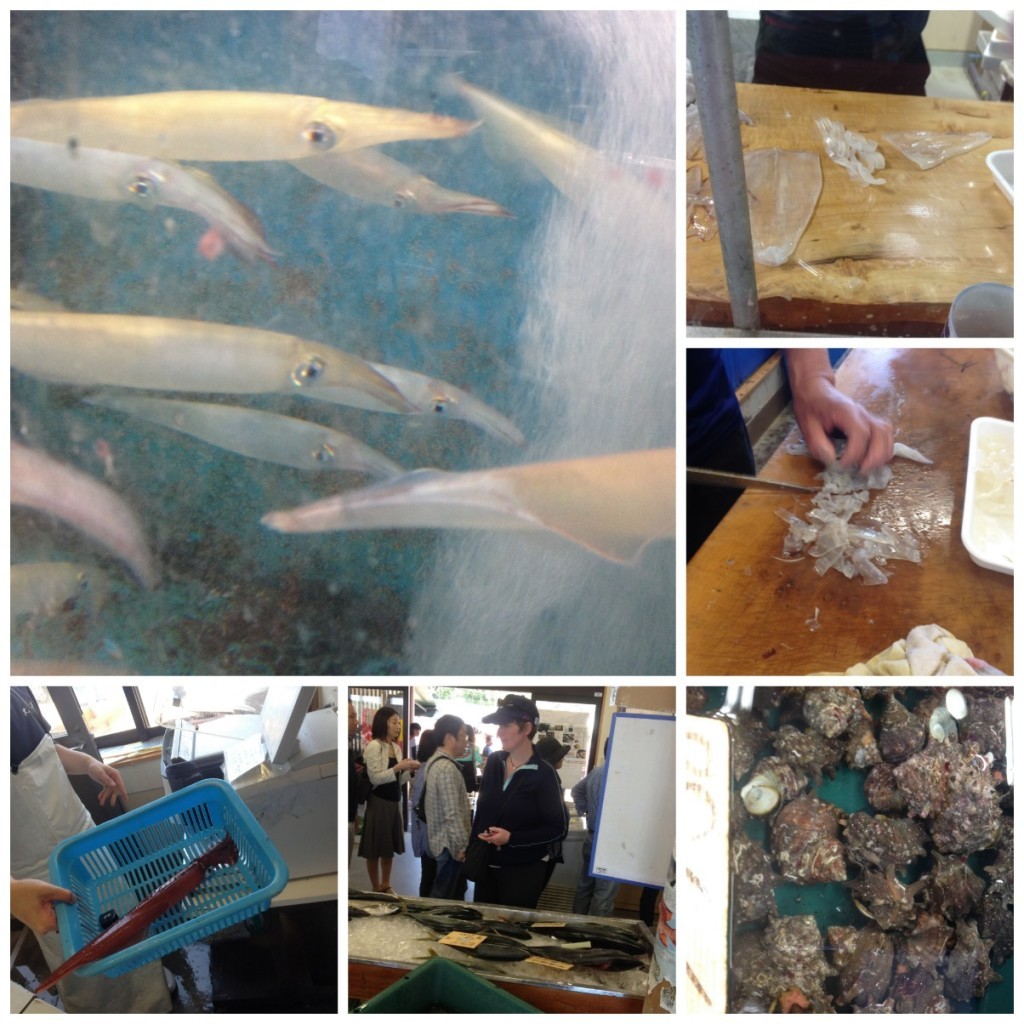 Yobuko is famous for the clear transparent squid

The tanks have many live squid and other fish but it’s the transparent squid that Captain wants to enjoy. We also bought some familiar sushi that we knew we’d enjoy. On trying the squid it was very tender and easy to eat, I’m not a huge squid fan but this was fine. 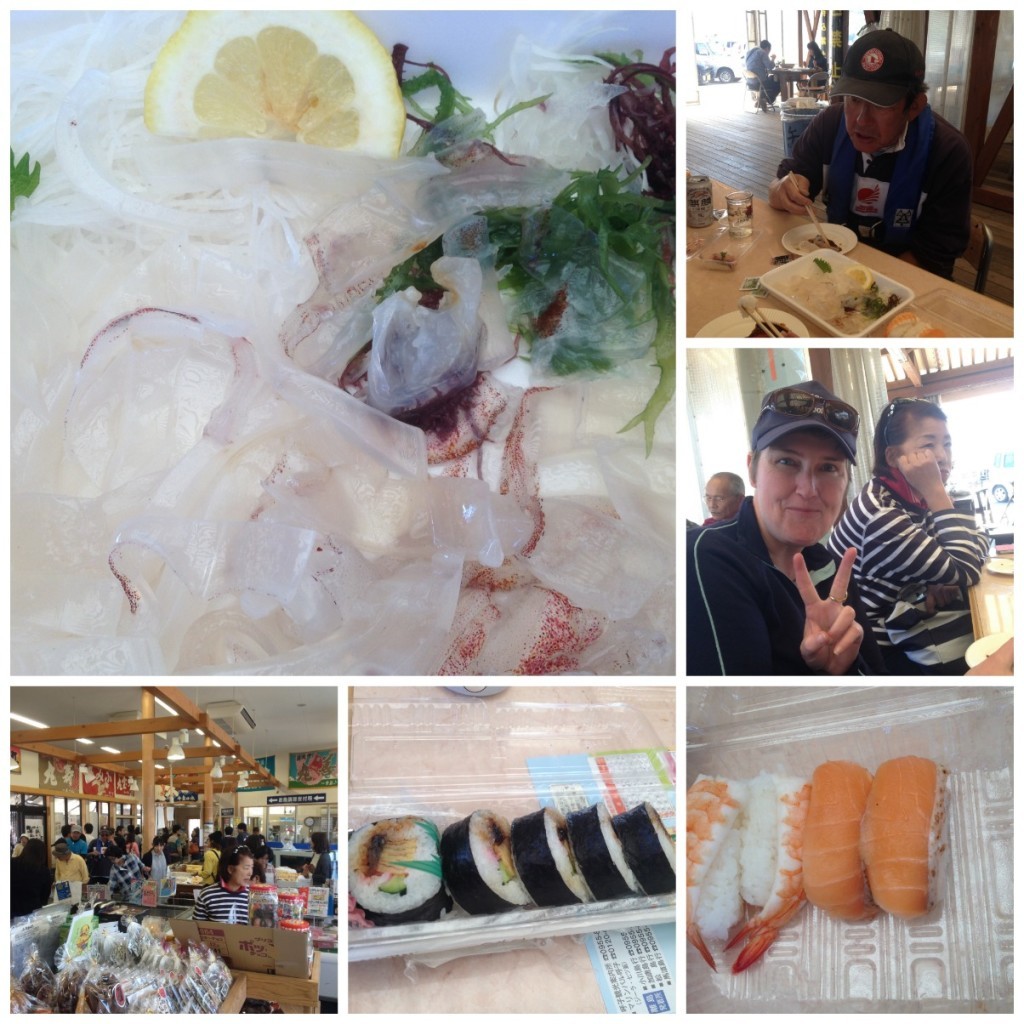 The famous transparent squid from Yobuko, look how clear the squid is

We purchase some ice creams before heading back to the yacht, which was alongside just around the corner from the markets. 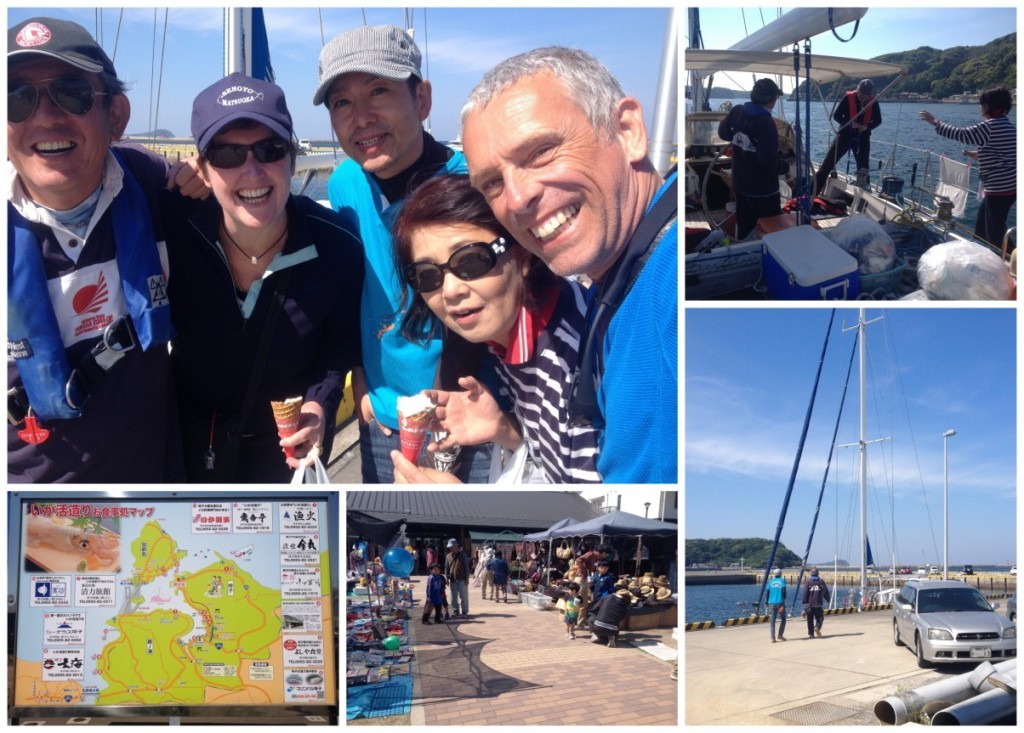 A great brief stop at Yubuko

We sail away from Yobuko all pleased that we made that Captain decided to make a brief stop here. It’s not long before Captain hands the helm over to Moni again which allows him to take a nap, that is great respect to Moni and her conscious ability to navigate the yacht onwards. 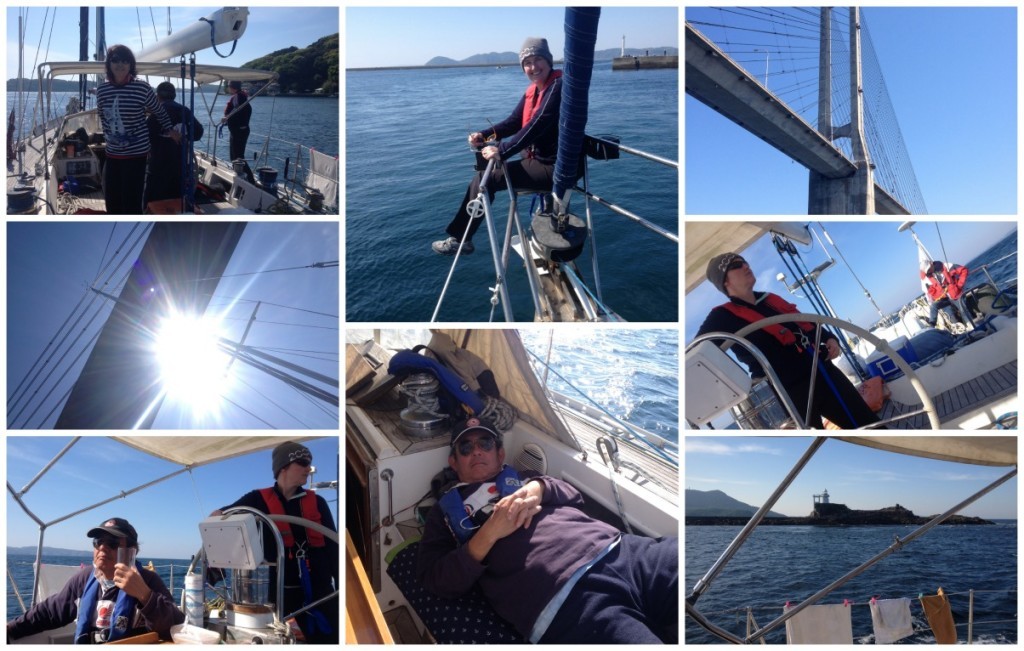 leaving Yobuko in calm waters, Moni at the front, and then at the helm while captain takes a nap

Captain takes back the helm to navigate the narrow entry to the port of Hirado after Moni did a great job. Hirado castle stands proud over the bay on this clear warm afternoon. Mr Guchi is at the port waiting for us, he traveled from Osaka today to meet up with Big Elle for the rest of the trip. 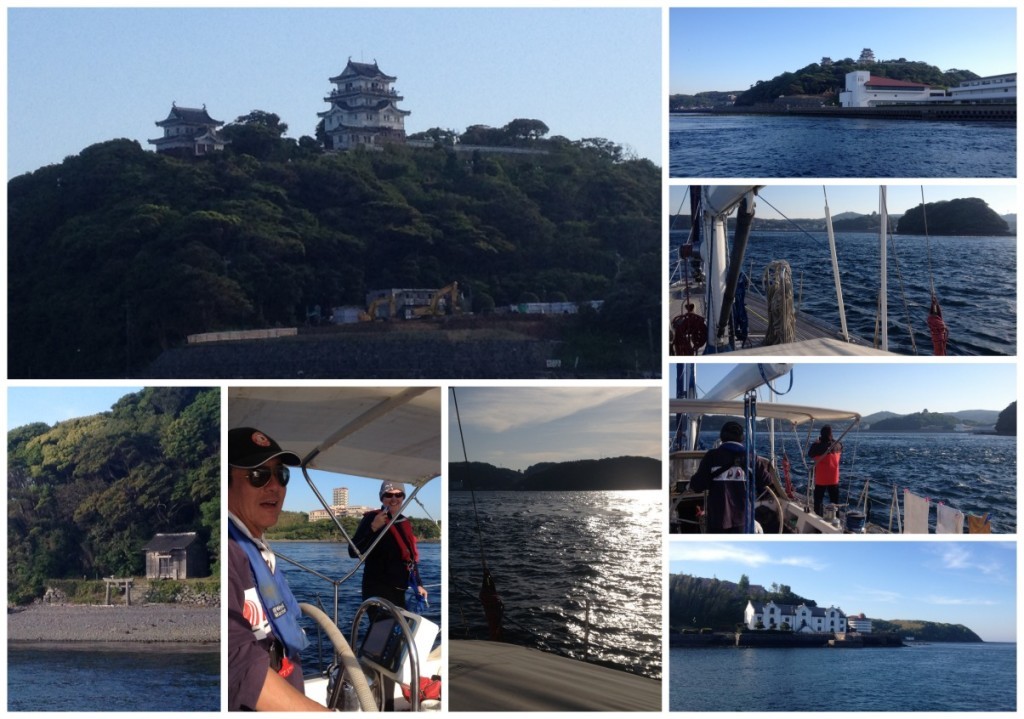 We dock alongside and soon after one of Toshi’s old school friends meets us and later takes us to a fine restaurant for dinner.

But not before we have a bath at the Hirado Wakigawa Hotel, here the baths are very nice and we spend about 30 minutes relaxing. This bath also has an outside bath with views to the surrounds, it is cold in the shade but in the bath it’s very hot, I realy liked that bath. 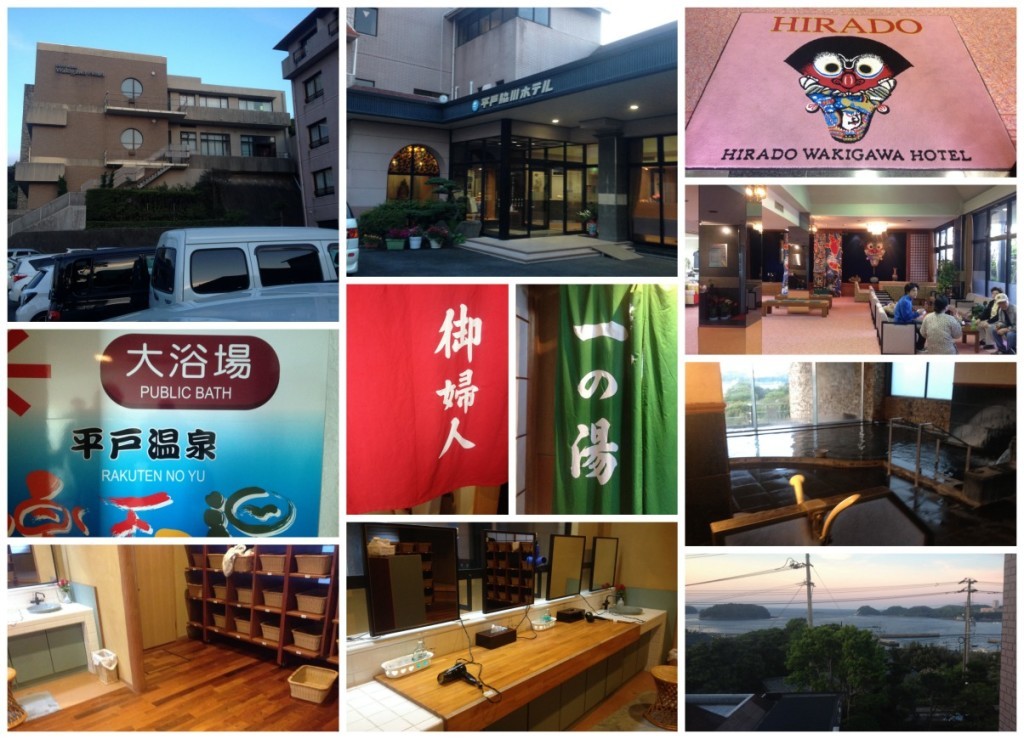 Hirado Wakigawa Hotel where we enjoy a wonderful bath

After bathing we then head to dinner at a favourite place of Toshi’s friend. 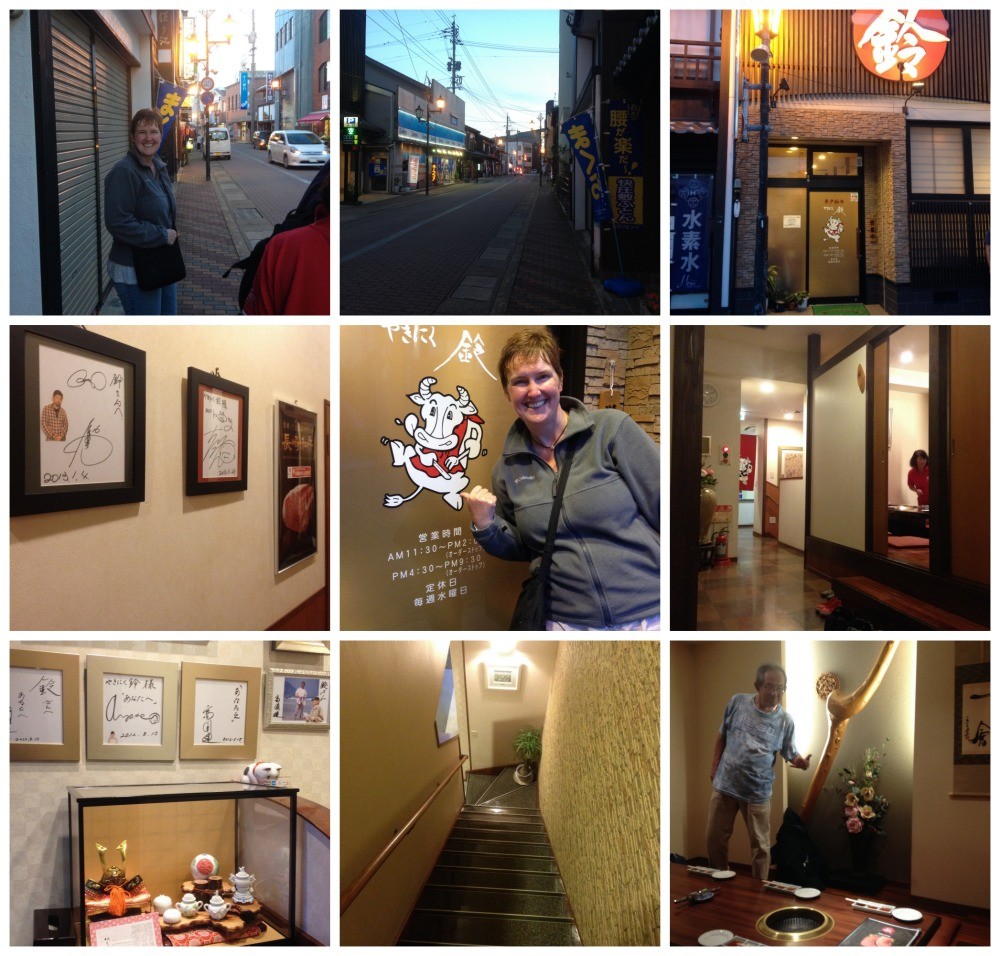 The food was delicious again even though some of it we didn’t try (intestines) Japan has many different foods that’s for sure. 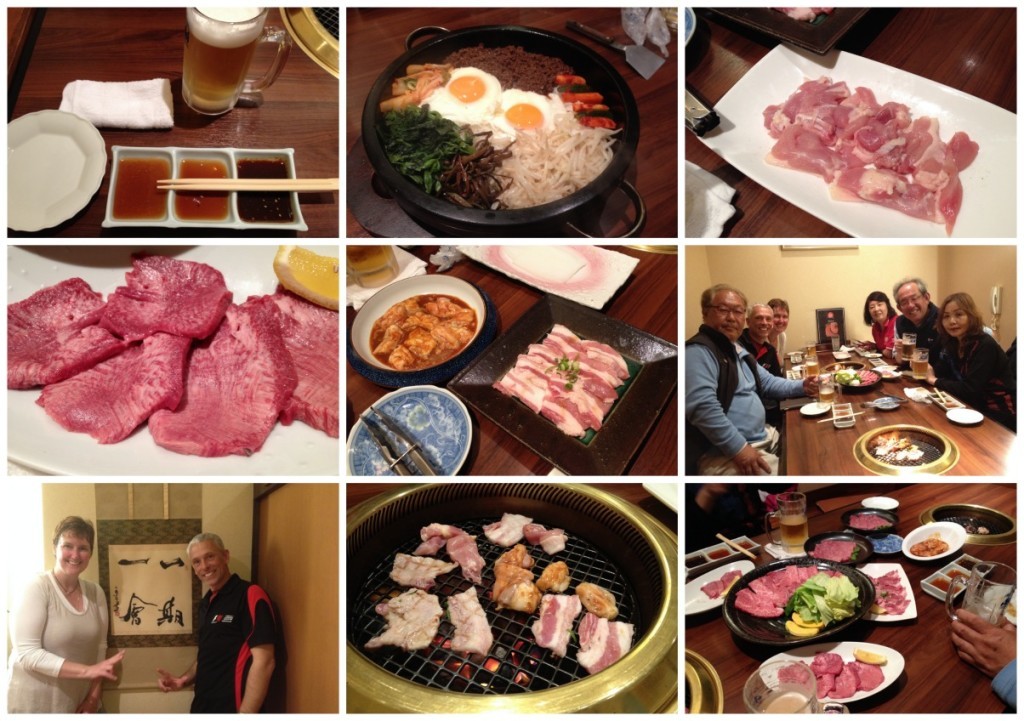 Next was a walk to Toshi’s friends Karaoke bar for a sing along. 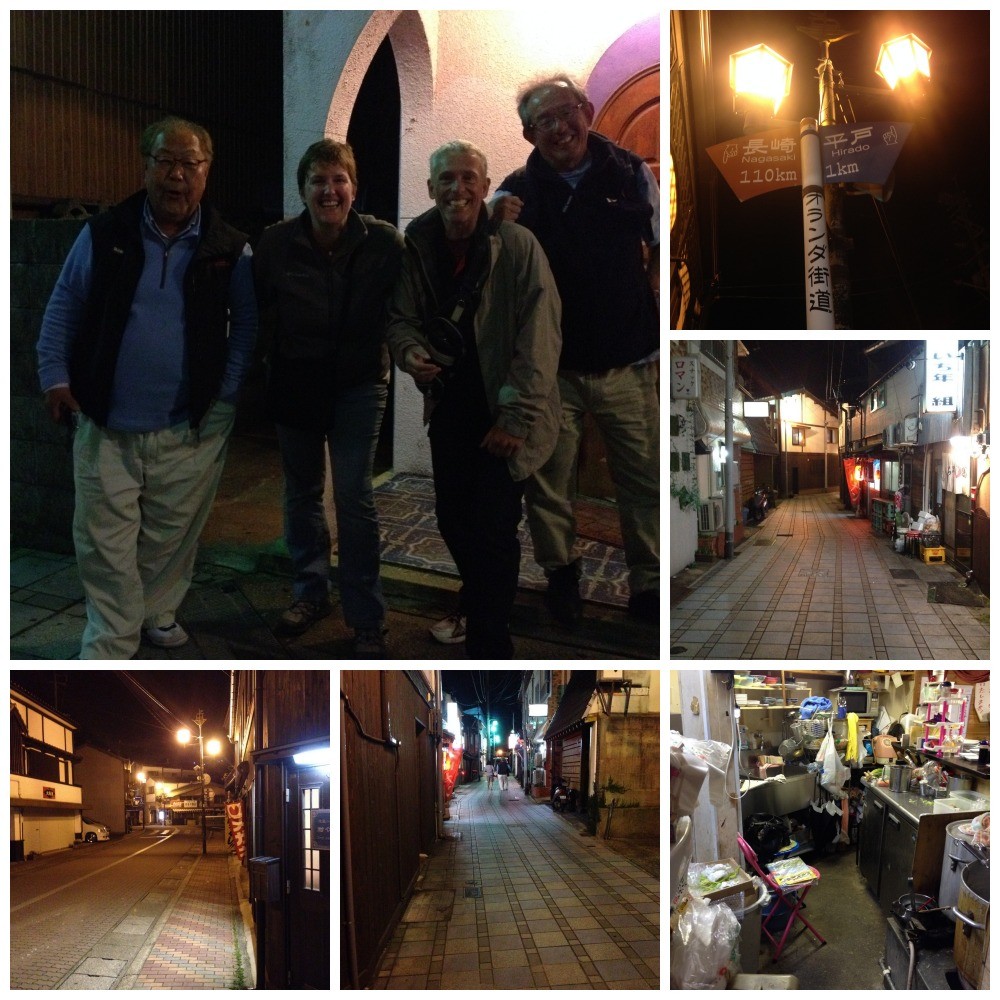 A walk down the streets of Hirado past a few eateries, better not look to closely

I know what you’re thinking, John and singing right, I totally get you but I’d like to report I did have plenty of applause. 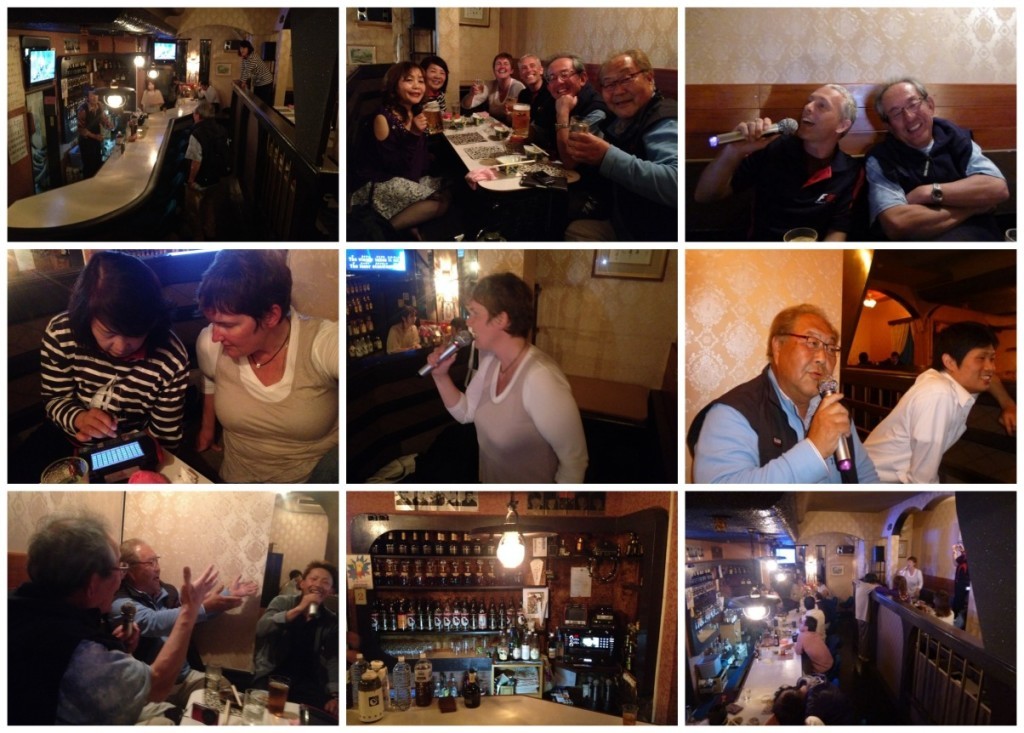 It was an awesome evening of fun and laughter was enjoyed by all of us, before making our way back to Big Elle in the early hours.

The map from today’s trip. From to Yokubo then on to Hirado, check out more photo’s on the Big Elle blog

Capsule Hotel Morning, Tokyo Planetarium at Sunshi...
Tokuyama to Moji Sailing on Big Elle
Sailing From Shiraishi to Kamikamagarishima
Sailing From Hirado to Arikawa During Golden Week
Moji to Oshima in Rough Waters