St Maarten airport at the beach

Saint Martin or Sint Maartin Whichever it is Awesome

We were coming alongside at 9am and we made sure that we had eaten breakfast and were ready to meet Edwardo & Carla and get a taxi together to Maho Bay beach at the airport to watch them land and take off.

We somehow managed to by-pass the queue of people in the stairwell as we went down to the level to get off.

With 5 sips in port and one of them the Oasis of the seas which has 6000 passengers alone, we were told there was upwards of 20,000 passengers on the island.

The Oasis is not actually much longer, where it adds its volume is in the width and height.

“The Oasis of the Seas dwarfs the Carnival Splendor” 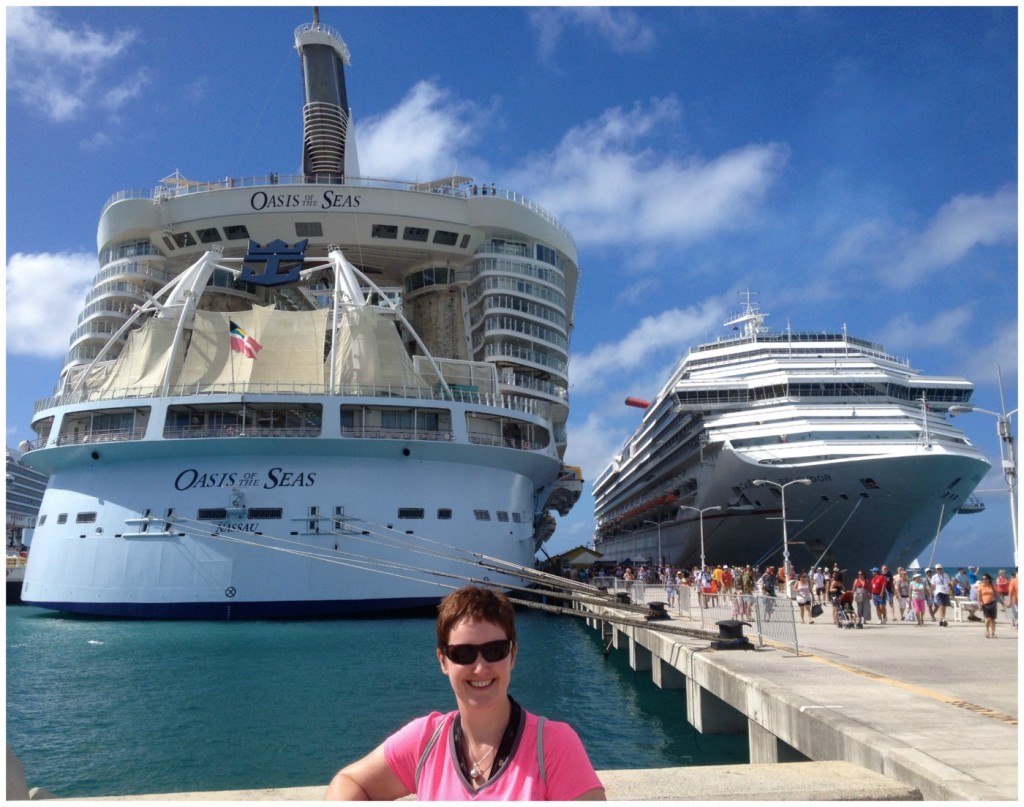 The Oasis of the seas dwarfs the Carnival Splendor

At the taxi rank in St Maarten you don’t haggle the price as it’s set for the amount of passengers.

The taxi rank was full of people but the taxis that were really shuttles that were taking full loads to different parts of the Island, Our shuttle cost $8 per person and took about 20 minutes to get to the beach. The traffic was busy with lots of shuttles etc on the roads due to the amount of tourists.

The driver said even though we thought it was busy, he said you ain’t seen nothin… On December 25th there will be 9 ships in, and the record has been 11 with eight in dock and 3 using tenders.

The above picture shows the five ships from the hill as we drove towards Maho Bay Beach and the Princess Juliana International Airport.

Once we were down at the beach ear to the airport runway we grabbed a beer, $2 & $3 dollars each and waited for the first plane.

Enjoying some local beers at St Maartin with Carla & Edwardo

I went to check the times that were on a black board (not that they were correct) and right then the first plane landed. Not the KLM on the left but the one on the right… pretty damn cool, and yes that is my photo.

KLM or not, awesome landings at St Maartin airport

The next four hours planes came and went, some bigger than others. The biggest of the day that we saw land was a four engine 740 Air France. 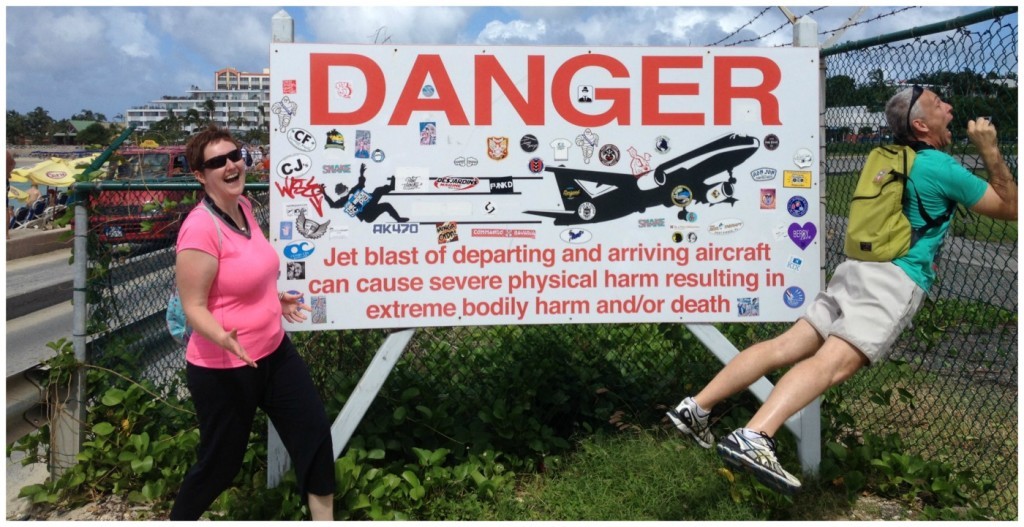 Even though there are plenty of warning signs around, the daredevil ones still hang on to the fence as the engines roar and the plane takes off.

Standing behind airplanes taking off at St Maartin

Even on the beach you can feel the effect of the larger airplanes taking off.

Beach destruction as plane takes off in St Maartin

We watched as people and anything that was not fastened down secure blew away off the beach and into the sea.

We saw many planes land and take off during the four hours we were there but the highlight was definitely when the larger planes A320 took off, people hang onto the fence for dear life as the plane revs up and then speeds off down the runway.

Just off the Maho Bay Beach are some shops and you can get cheaper beers and food there rather than at the bars and food joints on the beach. It’s also where the roundabout is with the big welcome to St Maartin sign is. 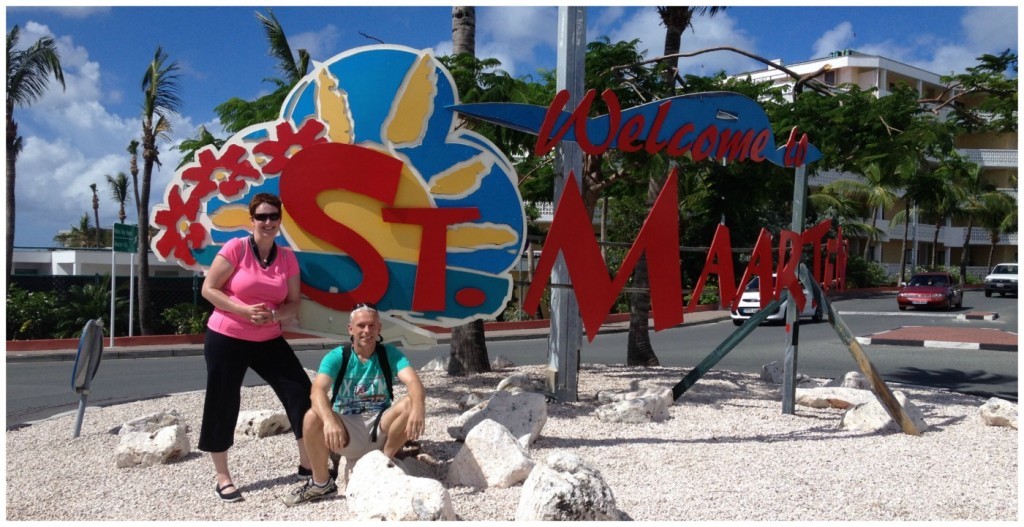 Around 2pm the united or AA was going to take off and we decided to hang on to the fence directly behind the plane… WOW it was hot, loud and very windy. We held on with all our strength and at the same time received a shower of sand. It was a pretty cool thing, but not sure I’d want to be behind the 747 from KLM which is the biggest on to arrive regularly.

After that one took off a few more landed and so we decided to get a shuttle back to the ship, another $8.00 per person.

“Touching planes in St Martin, well not quite” 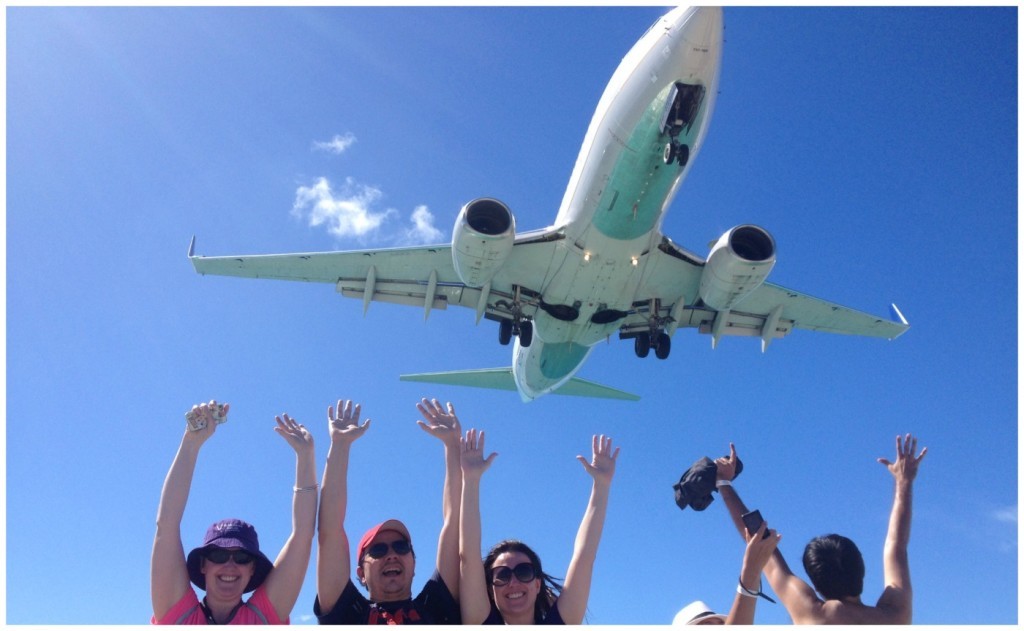 We got off in the town centre to have a quick look around before we hailed a cab to go to the French part of the island. 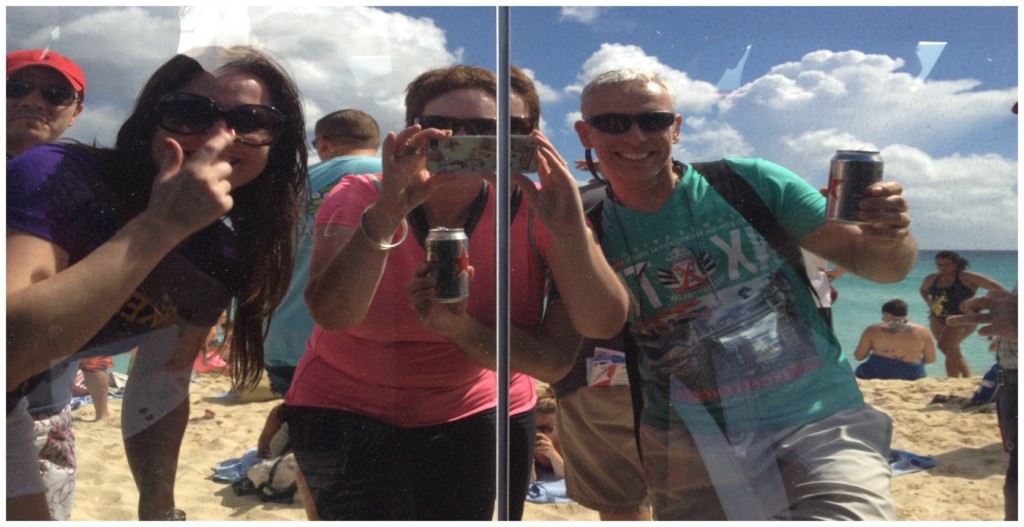 But before we got to the french side which is the bigger of the side we had to go back the way we came on the Dutch side. 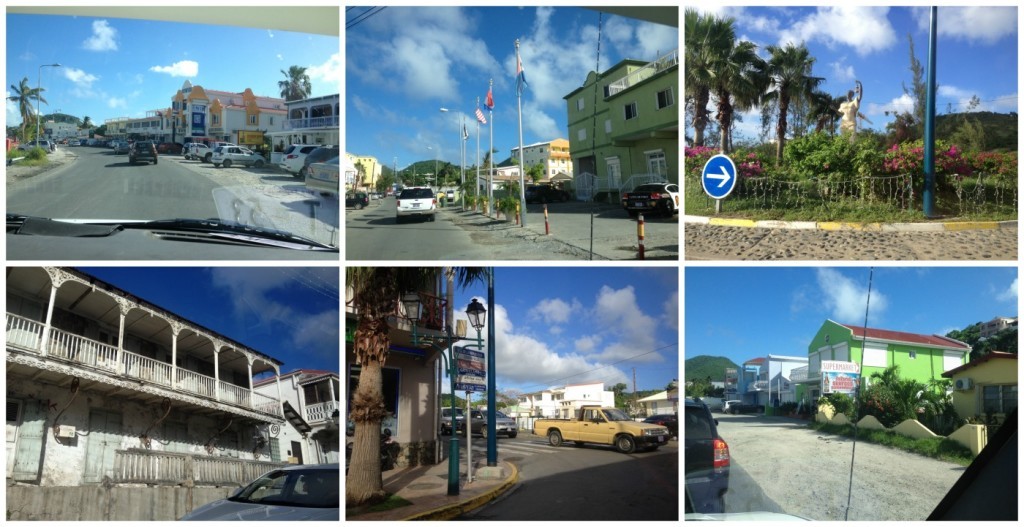 “The French side of Sint Maartin”

The driver agreed to give us a bit of a tour for $20 each and so we explored for an hour and half the french part. 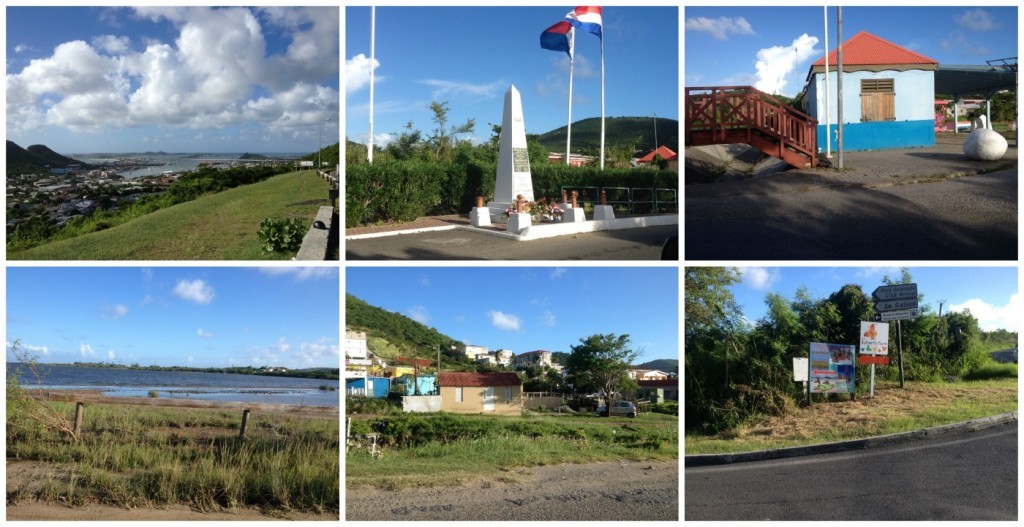 French flags in Sint Maartin, images from our drive around the island of St Martin

We ended up at a beach resort where nudity is welcomed!! 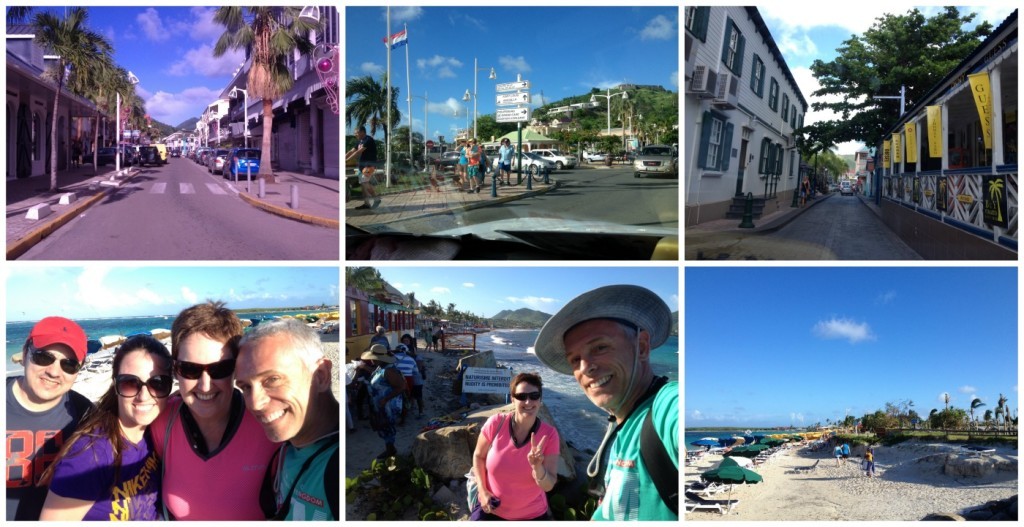 Our tour around took us to a nudist beach resort

We arrived back at the ship with plenty of time to spare so we sampled some Sint Maartin rum $6.00 before boarding the Splendor.

After a burger for late lunch we showered all the sand from our heads and then we watched the biggest cruise ship in the world leave port with the grace of a swan on water.

“Oasis of the Seas sails away at night”

The Oasis of the Seas cabins 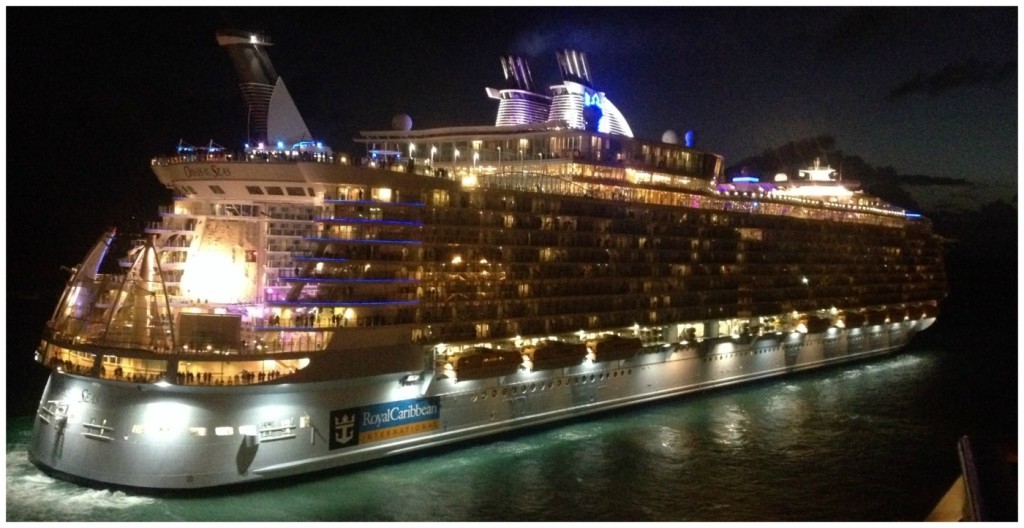 Oasis of the Seas at night

The Carnival Splendor was the last ship to leave port on our way to San Juan, Puerto Rico.

We walked down to the restaurant for dinner, on walking into the dining room we saw some tables nearly finished and assumed we were a bit late, then as we could see out table, it occurred to me that we were in fact too early for our sitting and tool late for the first, it was very funny indeed, needles to say we headed back to our cabin.

Dinner was not too bad tonight, with the maitre D saying hello and mentioning that he had received the message about the tea water being served up in the coffee thermos and hence the tea flavoured with coffee. 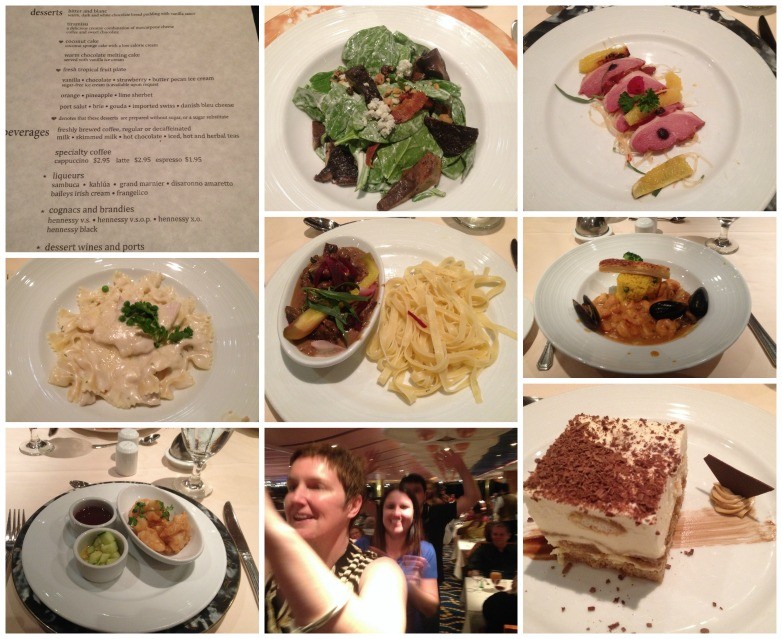 Dinner in the Golden Pearl

He apologised and said that he will ensure that the staff are made aware of this and that we will be on the priority list and gave us his direct number to call if it happens again.

At least the complaint got addressed and something was being done.

After dinner we headed straight to bed as San Juan is an early start. 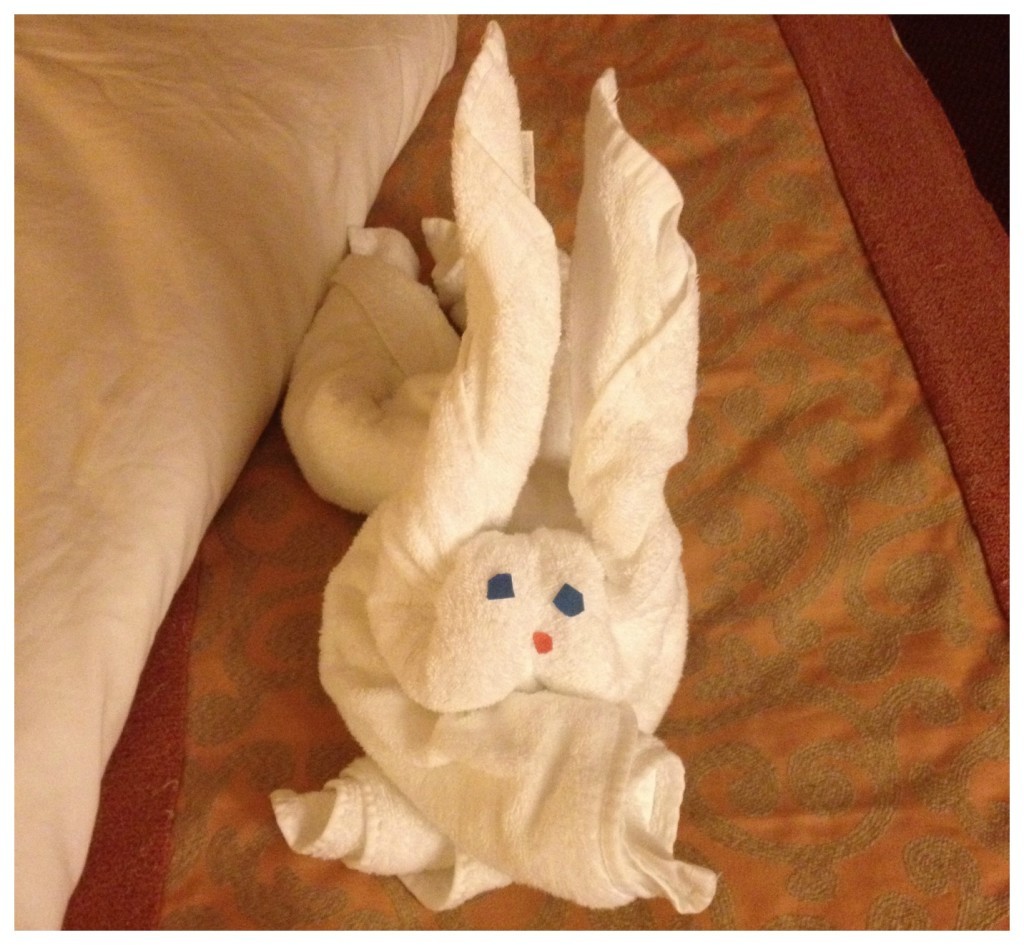