Check out at the Travelodge was at 11am and just before that we were handing in our room key at the front desk. We had most of our gear all packed up from the days before so we knew that our bags would be fine for the flight weight limits.

We ordered a taxi and within a few minutes it arrived to take us to the airport. The driver was really nice and chatted the all the way there, $42.00 including tip.

“Check-in was a breeze today, I know you must be thinking that’s a blatant lie, but it was”

The queue was long but moved rapidly and passport control was very simple, and security even more, no shoes off, no computers out, no emptying my water bottle and no big X-ray machine , just the plain old walk through… 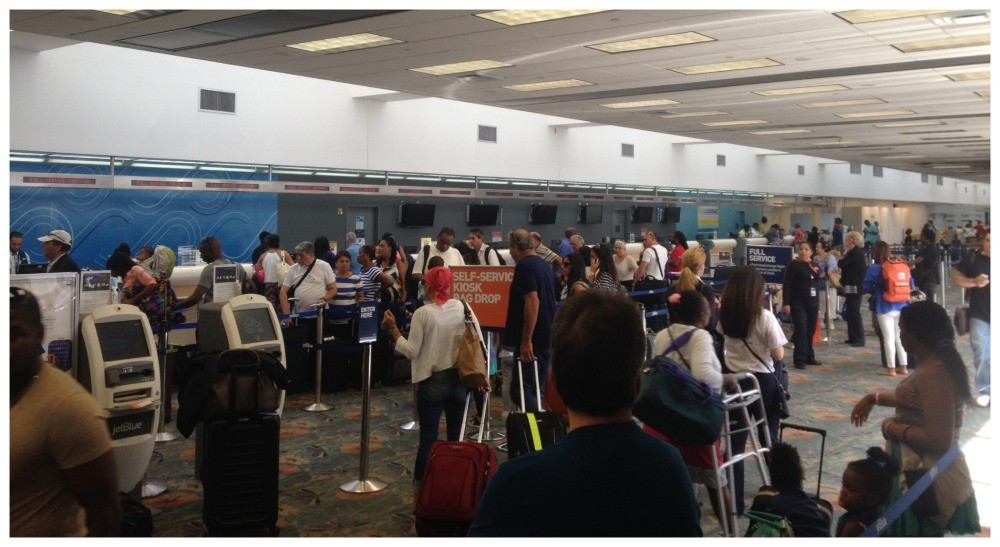 I always thought that the whole take the stuff out and shoes off was a load of crap, remember belts off etc. I wore the same pants going through Denver and they had to pat me down as the X-ray showed up the zippers, today nothing nada.

Consistency is certainly lacking throughout the USA in terms of security thats for sure which is really not good, I’d rather be patted down and checked thoroughly than not.

“Food Network Kitchen at the airport”

By now we were hungry and this part of the airport has very few options and we ended up at Food Network Kitchen for an expensive lunch, $31.80 for food & $17.64 for two beers. 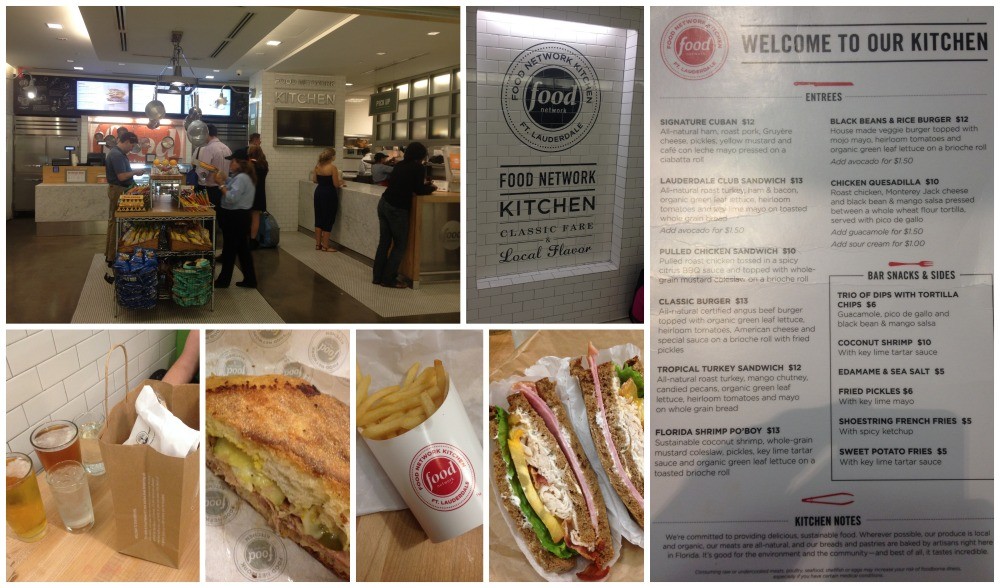 Food Network Kitchen at the airport

Lunch was very tasty even though pretty basic, but it did fill us up until our flight.

Once again the most excitement at the airport is the area where you can plug in to power… The reactions of the people when they finally find the power plugs is great until they realise they are all full, I had such a laugh watching this time and time again. The best was just when an old man came to a free seat, but no plug near enough so he unplugged somebody’s phone and moved it down the end where there was no seat, at that point the owner of the phone confronted him… It was ok, no harm done but it could have been.

Some people were plugged in for five hours, it just goes to show what is very important in a mobile device and that’s battery power.

We sat close but didn’t want to sit squashed between others and have people constantly leaning over you to plug in like in the middle picture. 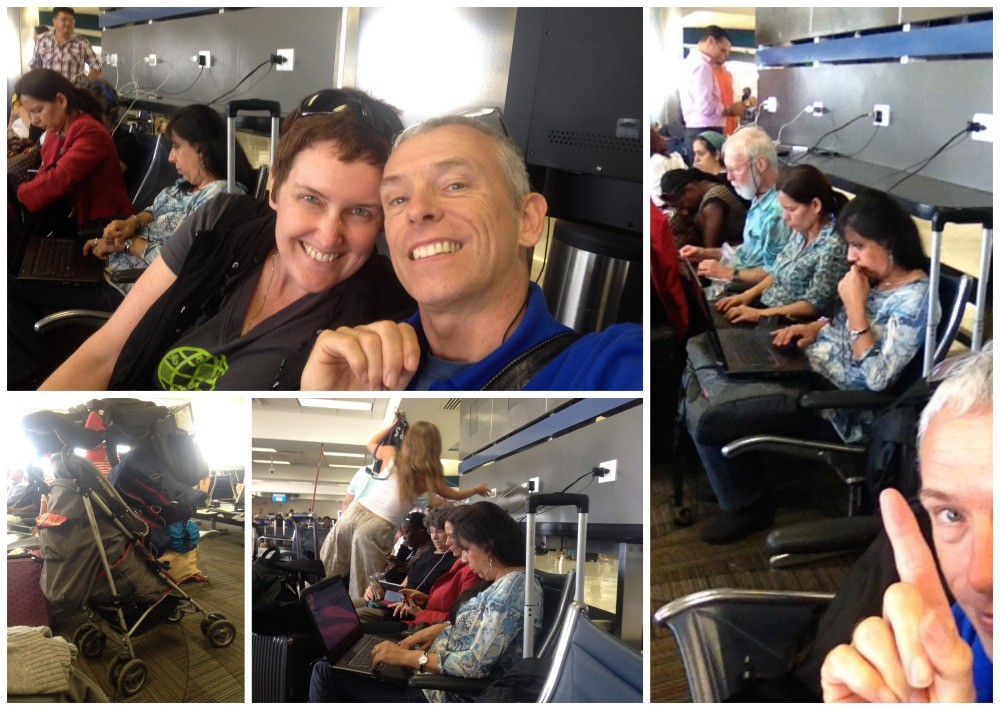 Plug in central at the airport

We had just over six hours to wait at the airport, the joys of air travel, however the Jet Blue flight to Medelin was delayed by an hour and 15 minutes, I’m not sure why but the gate we were supposed to leave from had another flight depart just before ours, and with our plane at the international part they had to arrange for another gate. Eventually we moved from gate 6 to 9 and boarded at 7.45pm with a take off at 8.03pm. 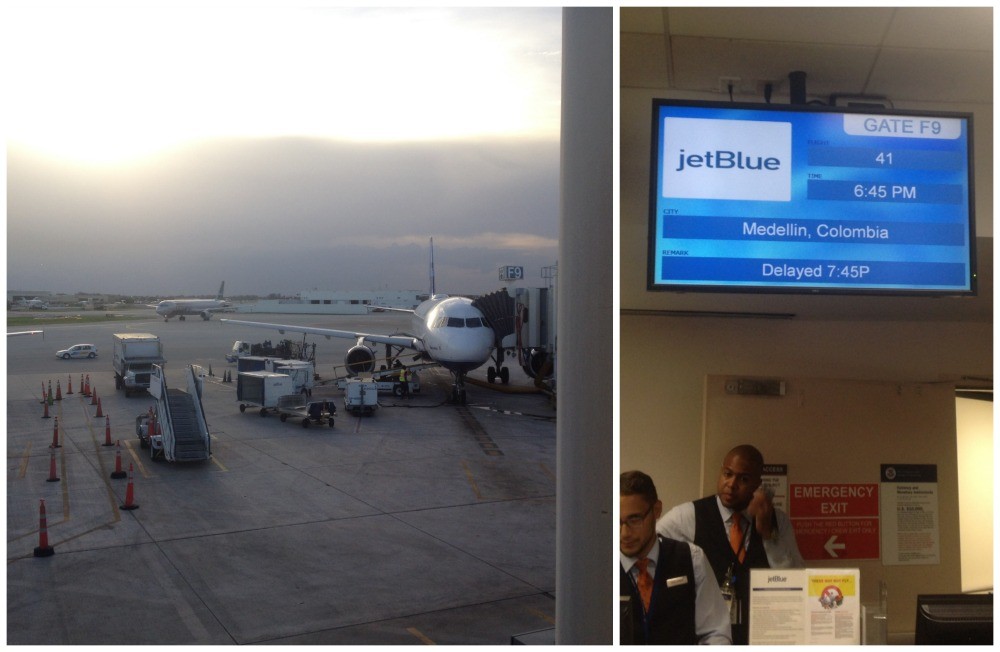 Our plane ready for us to board

Eventually we could board the plane ready for our next adventure, South America here we come.