If you ever get the chance to visit the city of Hiroshima then go without hesitation. It would be hard for anyone to visit this young city and not have some sort of emotion involved. A moving visit to Hiroshima with the sights of the A-bomb dome at the Peace memorial park, Hiroshima castle and Shukkeien garden plus so much more.

I woke up early, but let Moni sleep for another hour as we were late to bed the night before, as you can see the sun was shining for us.

Sunrise from our balcony in Sembayashi-omiya

Eventually we make our way to the station for the Shinkansen, by now we know the way pretty good yet we still have to look to make sure. 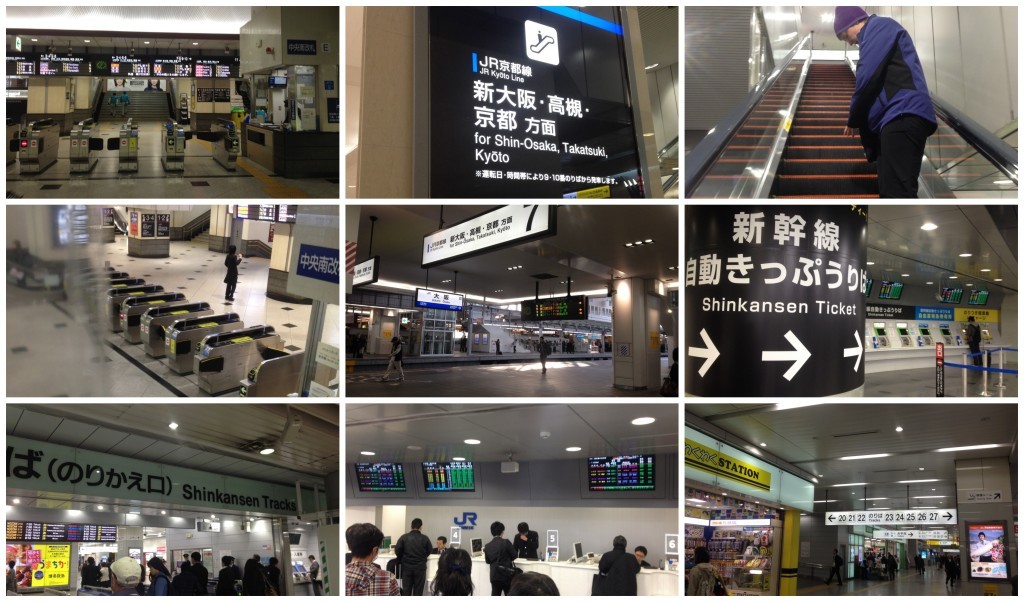 Our reserved seats take us to Hiroshima and there we spend the day sightseeing around. 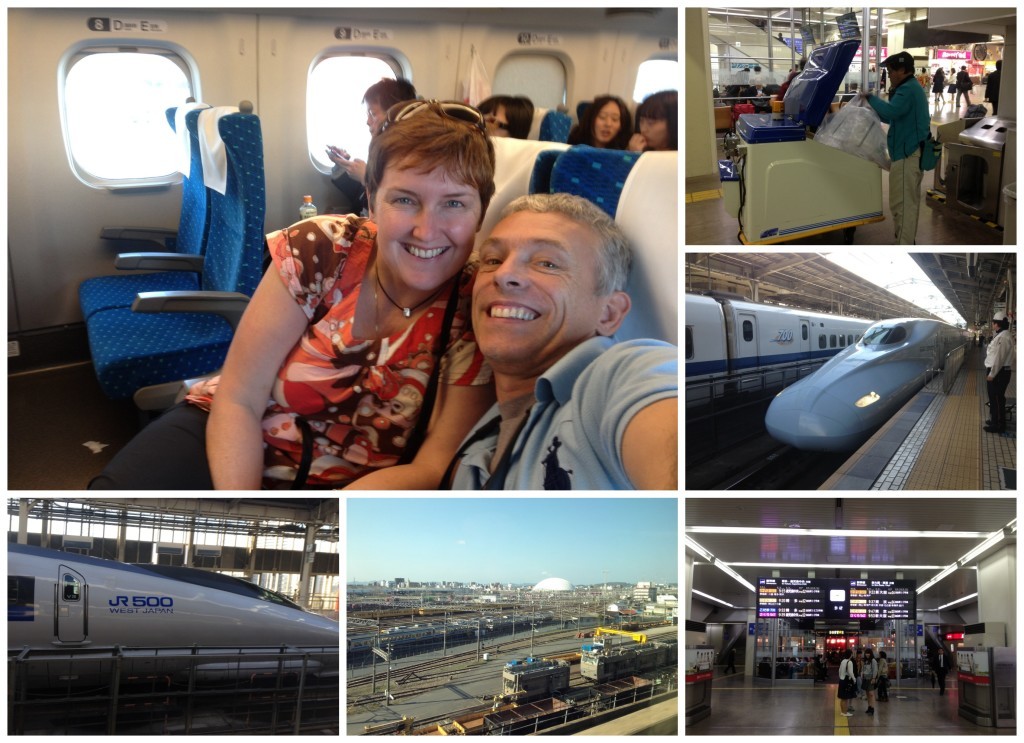 Traveling by Shinkansen in Japan

A loop bus that the JR pass is valid on goes from the station to the main tourist spots and we use it to get to the Shukkeien Garden a very pretty garden dating back to 1620, with walking paths that guide you around. 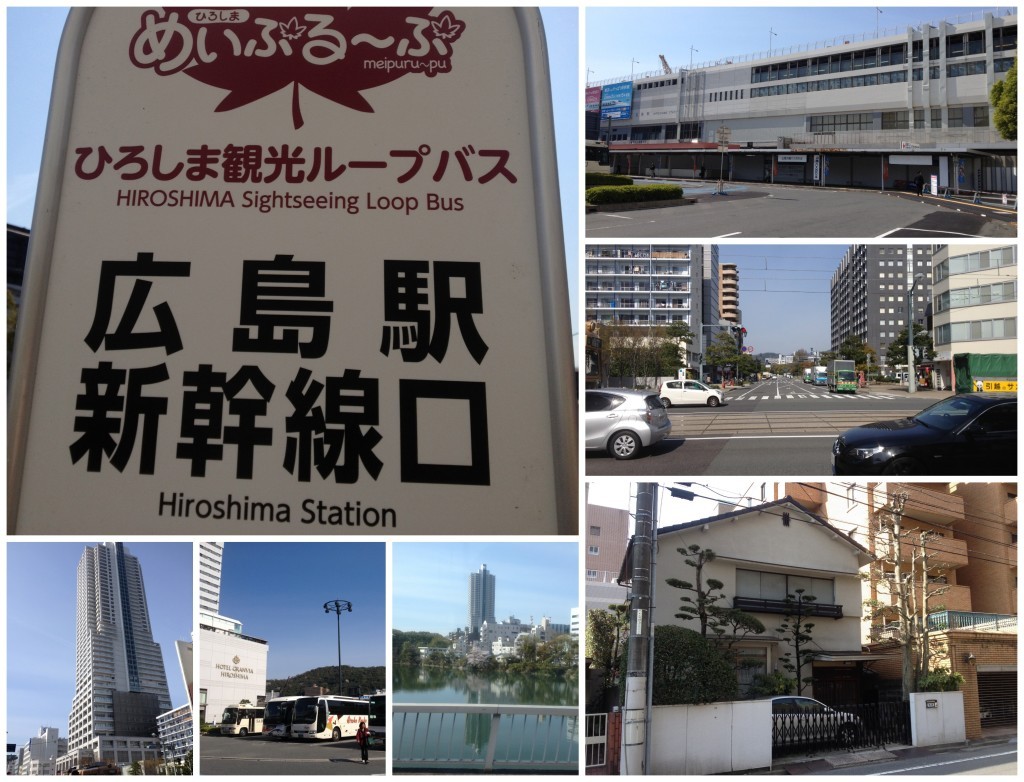 “A walk to the beautiful Shukkeien Garden”

It is a typical circular-tour garden which unfortunately was destroyed by the atomic bomb, but thanks to the Hiroshima board of education the garden and many of the structures have been restored which is probably why some 180,000 visitors come each year. 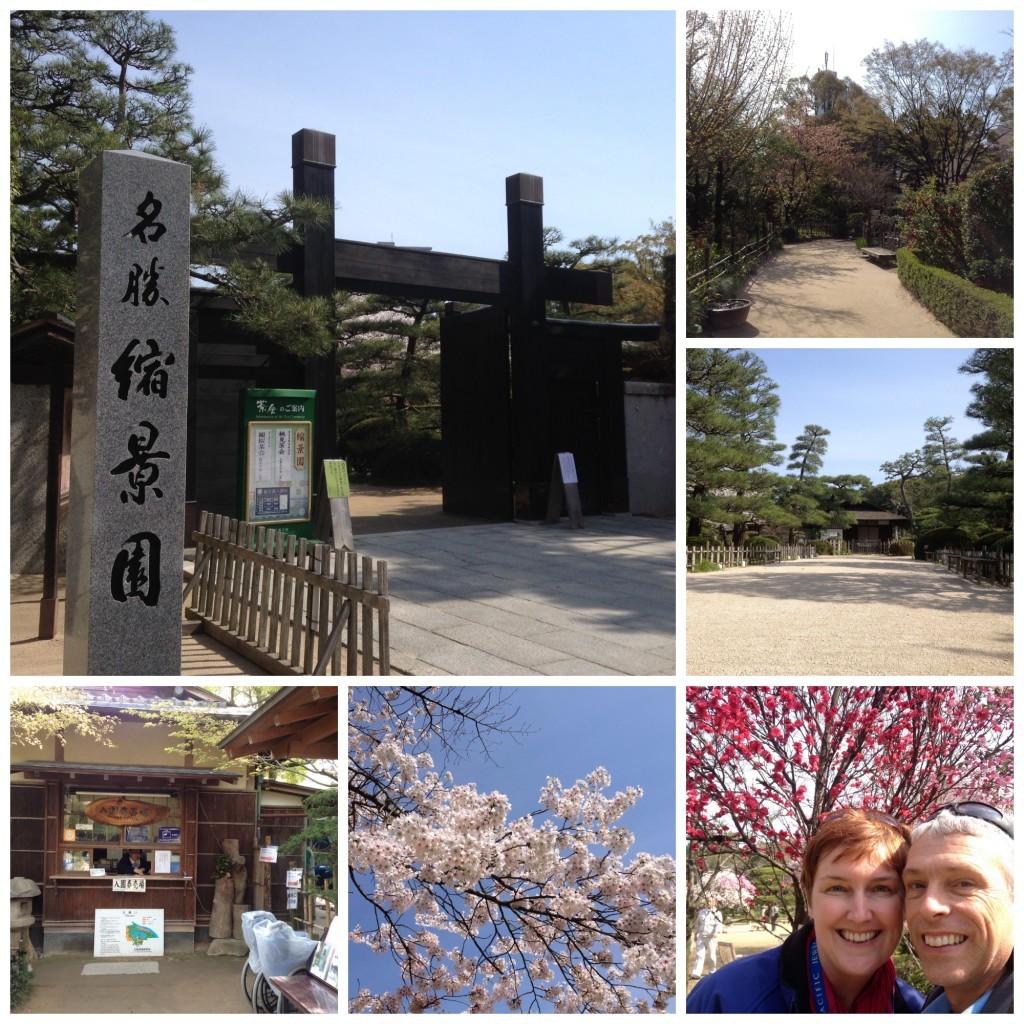 A large pond is the centre attraction with various decorations on route.

The sakura are in full bloom here and very impressive and we stop to enjoy a cup of tea while observing a young couple having wedding photos taken, all very beautiful.

Cherry blossom in the Shukkeien garden

The garden is very impressive even though it is not a hugh place it has a feel of being big probably due to all the ponds and turns left and right each time giving you a different view of the landscape.

The bridge in the picture above is what remained after the Atomic Bomb, below is a photo of how it was back then. 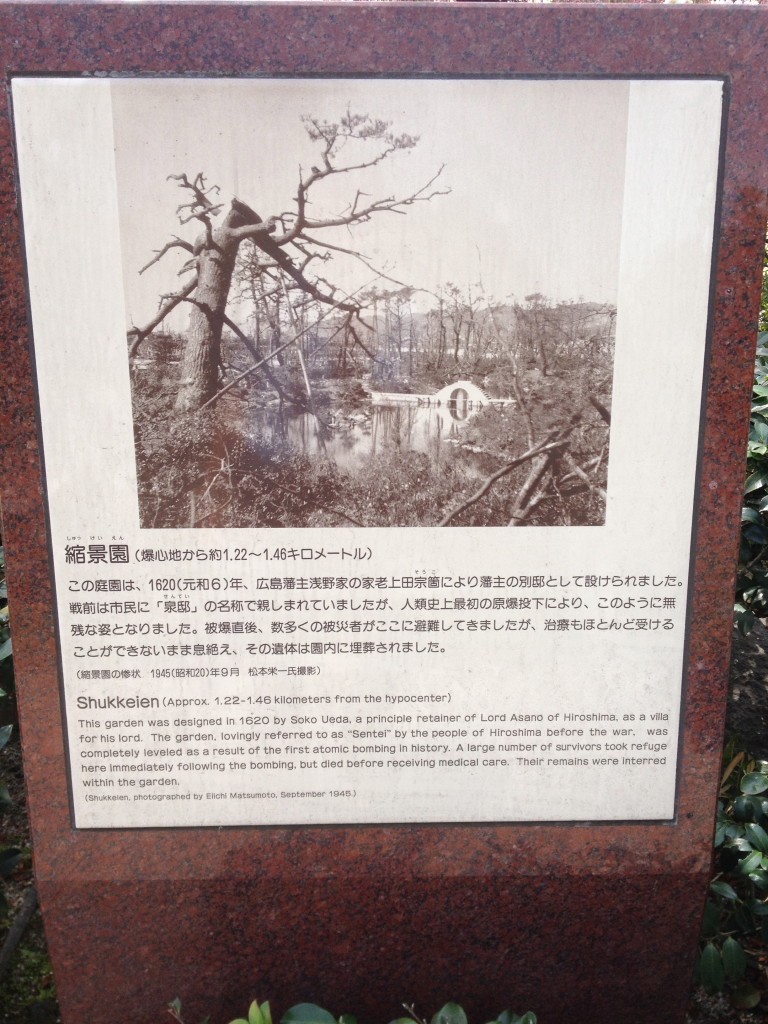 Shukkeien Garden after the Atomic Bomb

From the garden it’s a short walk to

Images from the streets of Hiroshima

Here you can see the first remains of the Atomic bomb from 1945. A eucalyptus tree has survived all these years among a place that was totally destroyed. 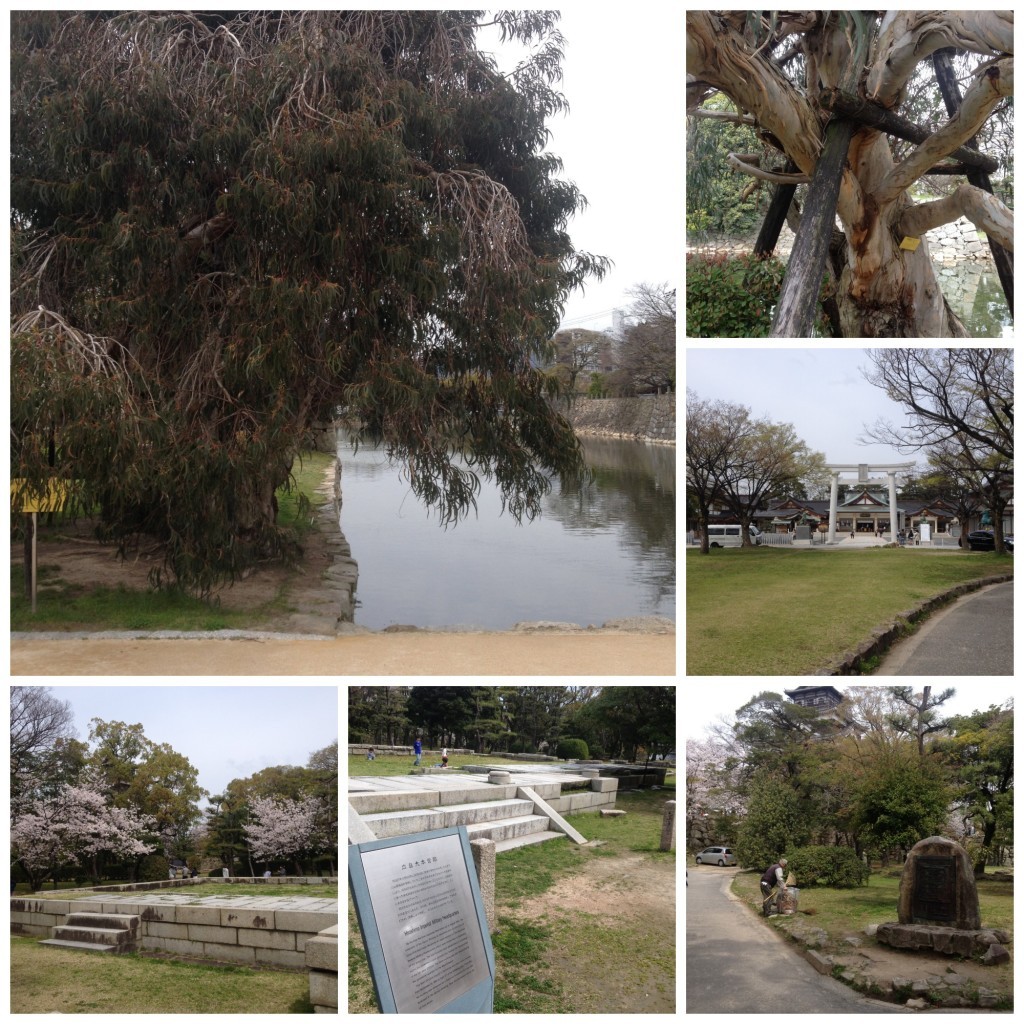 The castle today is a reconstruction from the original as it was also totally destroyed. The views are awesome from the top and you can see how this city has truly grown back from disaster. In such a short time it has grown into a bustling city full of life. 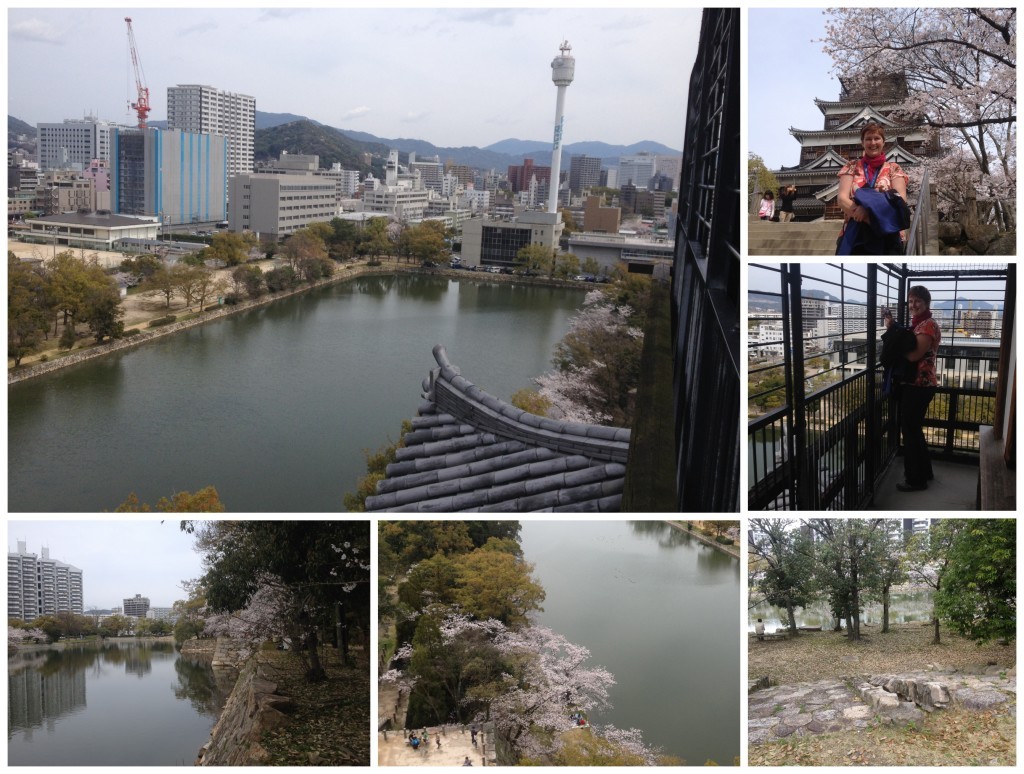 which again is only a short walk away. The first thing that breaks the view is the A-Bomb dome, which is the remains of the general headquarters of the years gone by. 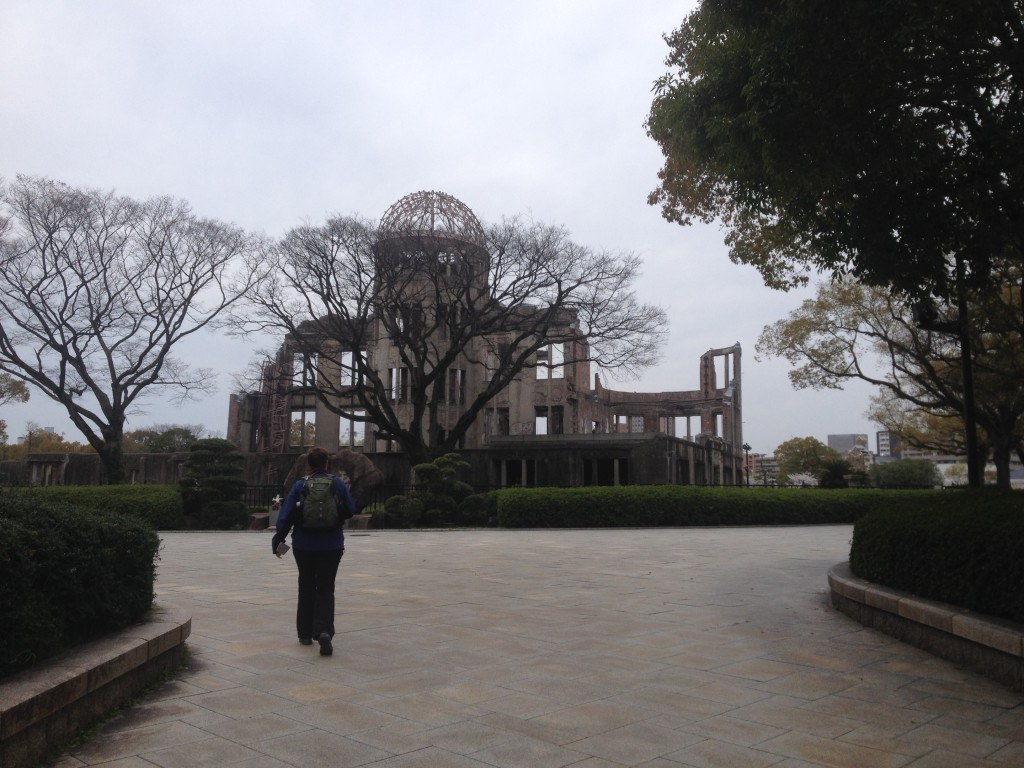 The building is exactly as it was after the A bomb hit obviously with no radiation present in Hiroshima anymore. This stays as a ghostly reminder of the horrific events. A small stand with books on is near which draw the attention of many that stop and read some true facts. A very sobering moment for sure. An event that should never happen again. 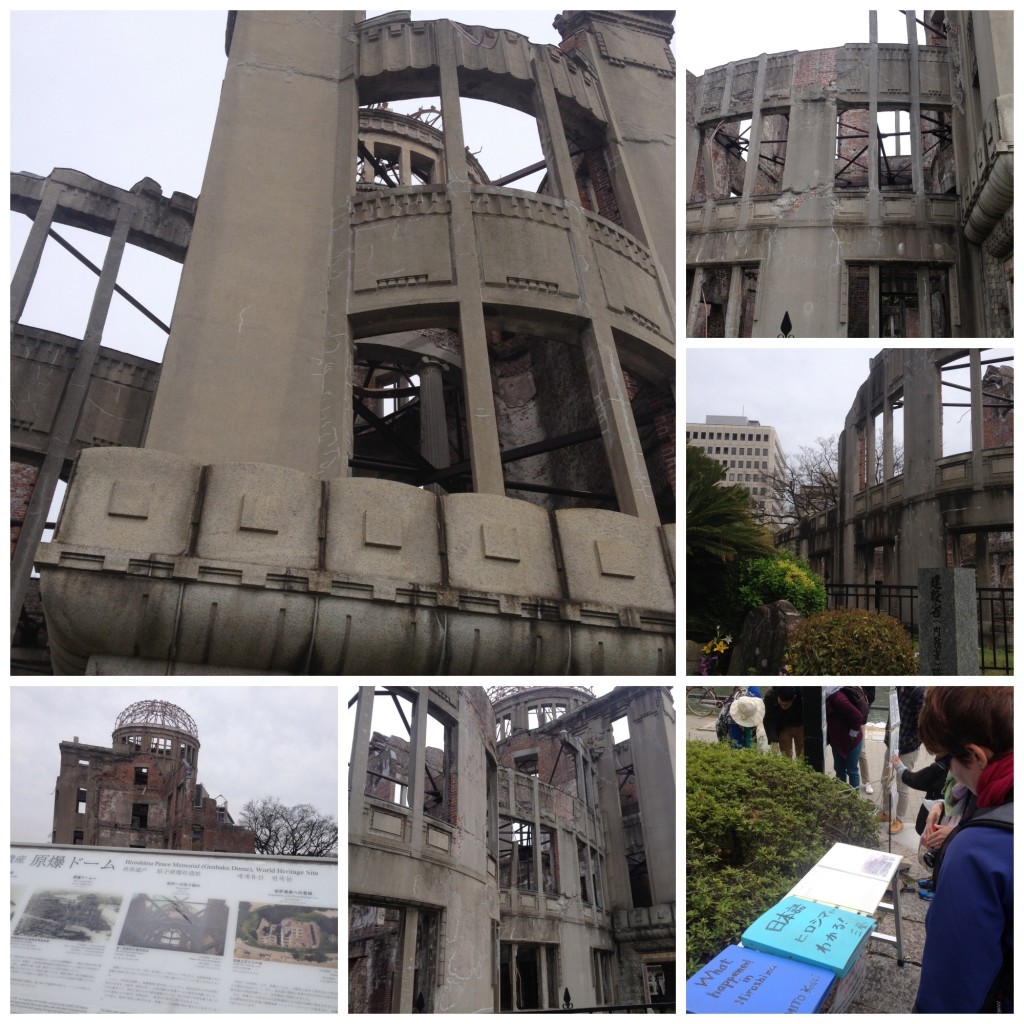 Images from the A-bomb Dome

In 1996 the Atomic Bomb Dome was registered as a UNESCO World Heritage Site and today draws some 1.2 million people to visit annually. After some time reading we move on towards the flame and arch which is further into the park. 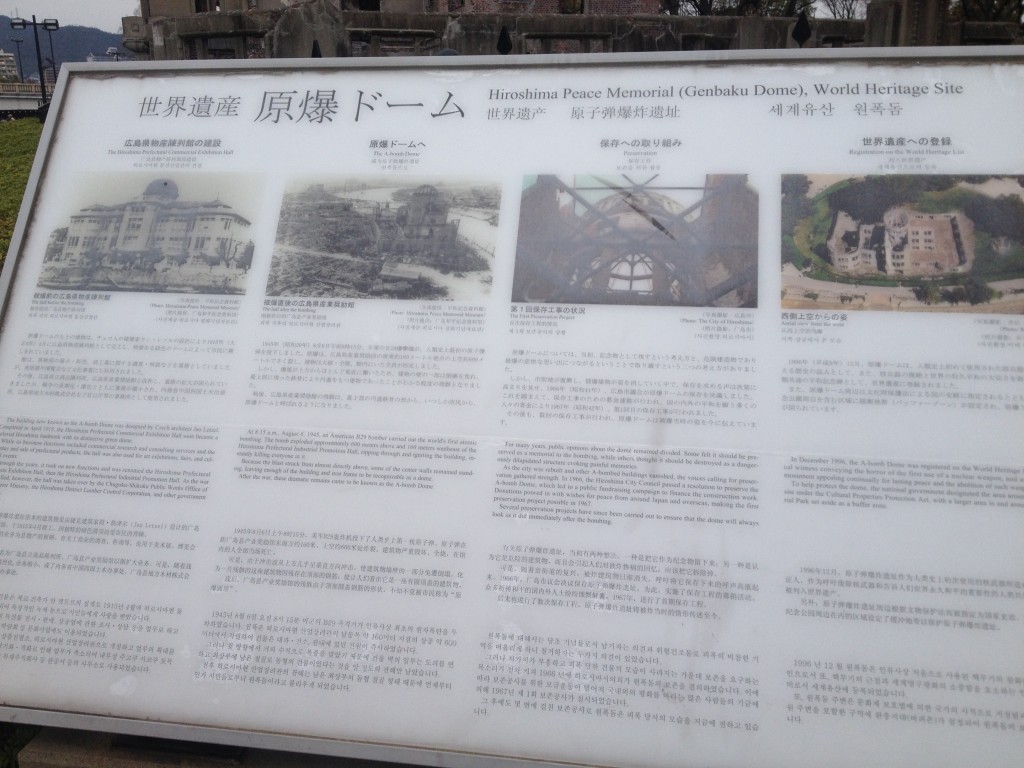 A-bomb Dome plaque, at 8.15am the first atomic bomb exploded 600 meters above & 160 meters west of this building killing everyone. Because is was above the building some of the inside walls have stayed

“We pass the Hypocenter where the A-Bomb hit”

a new hospital stands in its place now and all around it is built up.

Hypocenter. The exact place where the atomic bomb struck

The river comes into view now and it’s lined by many cherry blossom trees that are in full bloom. 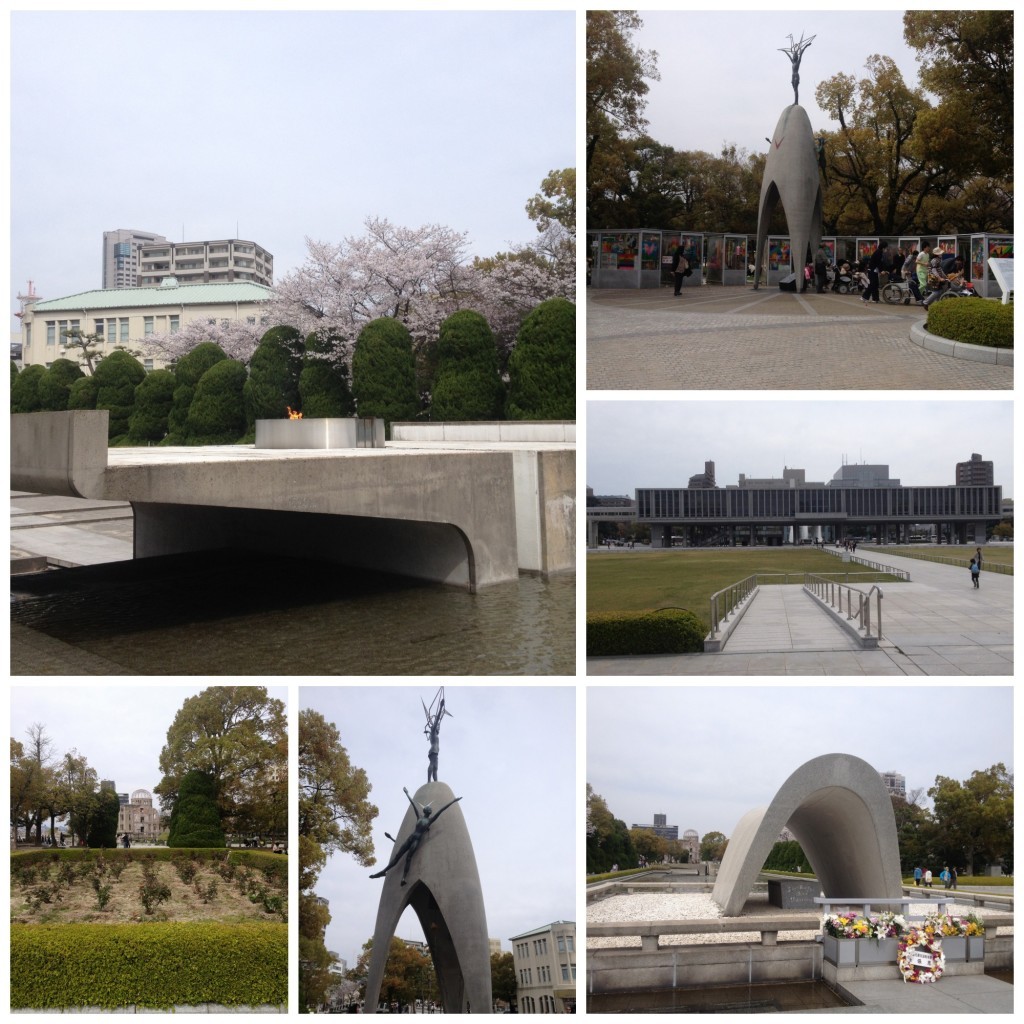 Peace park with the eternal flame, the museum, the Cenotaph & the children’s peace monument

Hoards of people are sat beneath the cherry trees on mats or tarps enjoying the fine day. This is a very popular pastime which the Japanese make the most of each season.

They guard their chosen spots which they stake out with mats and one person holds the place until the time comes when the others can all join. A wonderful sight for sure. And so special that people actually appreciate the beauty of nature in such a fantastic way. 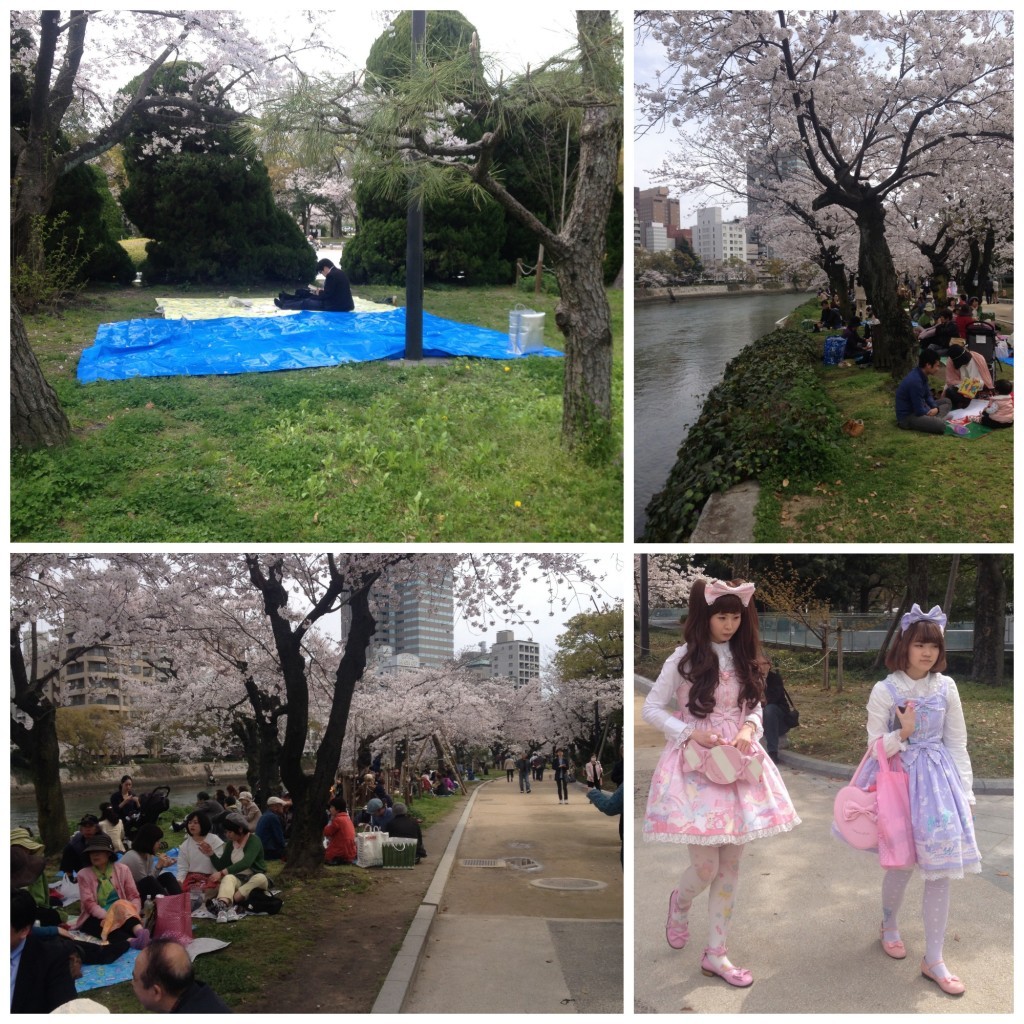 It’s actually the first day that Moni and I see more tourists, you can spot them a mile away, boy I hope we don’t stand out like they do, lol

We are looking for a place to eat. Toshi had recommend a restaurant but that is a bit of a walk away. The okonomiyaki place we first see is very busy and people waiting, so we walk on.

We find a place called Anderson and try that out. It’s a bit like Movenpick in Switzerland, food stations that you can order from and then pay at the end. We chose and enjoy again remarking on how clean and well presented everything is. After lunch we go downstairs to the cafe for a coffee which is fine. 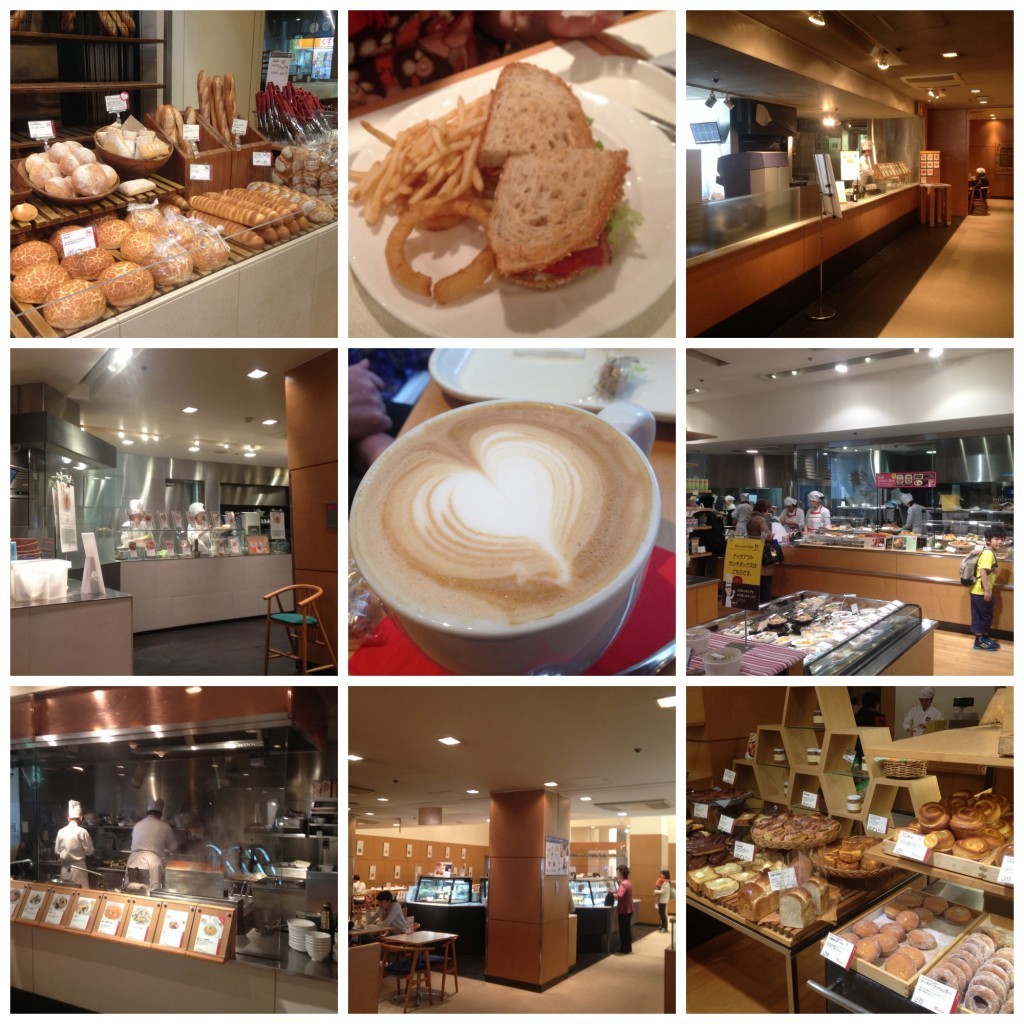 Back out into the streets we continue through the shops looking around. A few hours pass and we slowly make our way back to the station. We cant find the free loop bus stop so we get on a tram which takes us to the JR station and our Shinkansen back home. 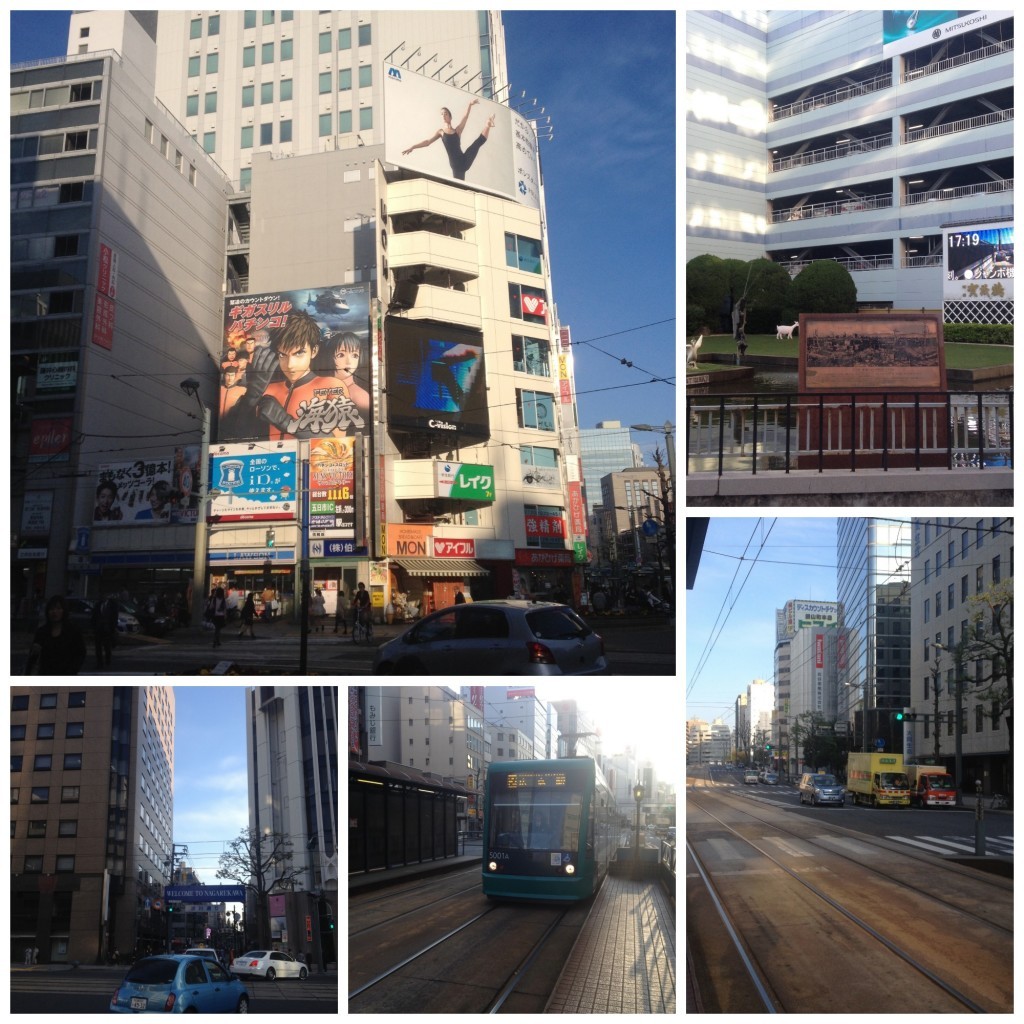 A great day spent in a new city that has left wonderful memories for us. Let’s pray that events like the first atomic bombing never occur again.

Miyajima Island with Mt Misen and The Itsukushima ...
Kanazawa Castle and Kenrokuen Gardens Well Worth a...
Cherry Blossoms at Kumamoto Castle in Kyushu