I’ve been following the PGA golf this week on TV when ever I could and today was the final round. Sat at my laptop with the golf on in the background I tried to get some stuff done, but the golf was just too good and so it took priority.

This PGA Championship has been rather special, just the other day Aussie boy Jason Day hit a wild drive and was having to play his shot without shoes and his trousers rolled up after wading across the creek to his ball.

“Jason Day crossing the river playing with no shoes in shorts” 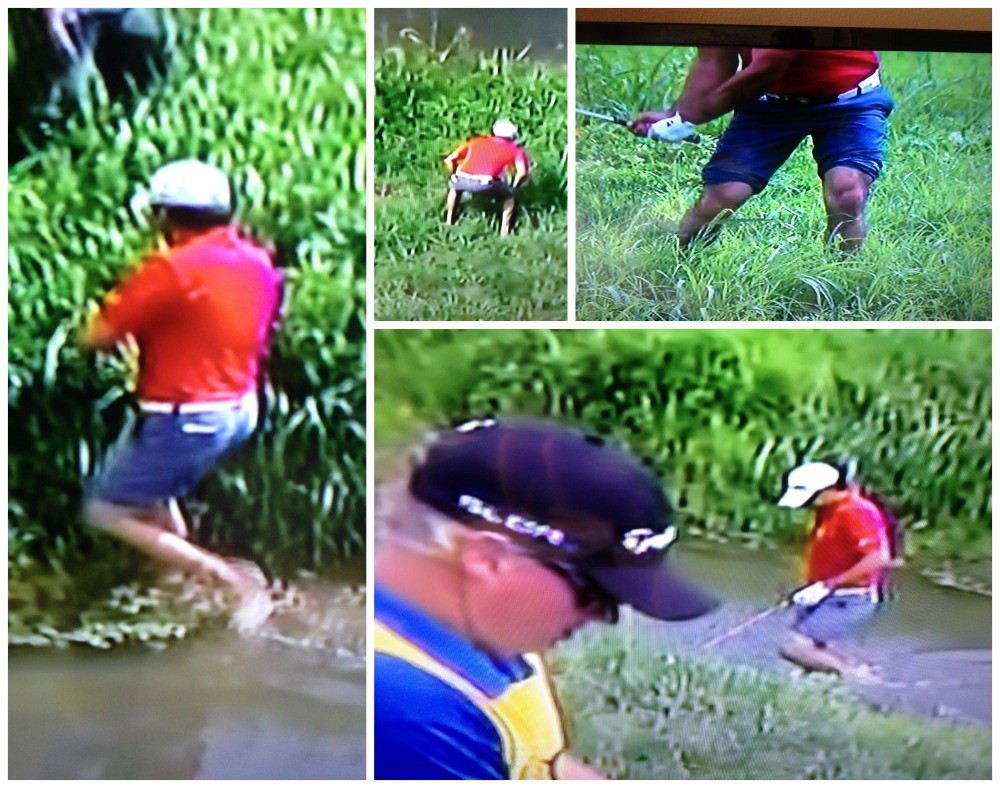 Jason Day crossing the river playing with no shoes in shorts

“we actually had pea size hail”

The weather outside was pretty dismal and at times we actually had pea size hail. But for me that was just fine as the golf that I was watching was probably the best that I have seen.

Hail outside in Keystone

“the man with the hottest clubs right now Rory Mcilroy”

I really enjoyed it, from the moment the coverage started and Ernie Ells making birdie after birdie on the front nine I was hooked. But there was even better to come.

My favourite golfer Phil Mickelson played a blinder and was only out done by the man with the hottest clubs right now Rory Mcilroy.

“So why was this years PGP golf championship so dam good”?

Firstly with Rory Mcilroy being such a powerhouse at the moment it was expected that he would walk away with this trophy.He was trying to win a third tournament in a row and also to become one of the youngest players to have won four major’s, and be among the greats like Tiger Woods & Jack Nicklaus.For me was not a forgone conclusion that he would win considering the immense pressure on his shoulders.After two low par rounds Rory was successfully leading the tournament in the clubhouse, having had Tiger Woods fail to make the cut which was not surprising due to his back injury. The question was, who would be challenging Rory for the championship.

“they all played fantastic games at a ferocious pace”

The spectacle of day three was when Australian boy Jason Day hit a wild one of the tee and had to wade through the creek to retrieve and play his ball with no shoes and his trousers rolled up looking like shorts which has to be a first in a PGA Championship. Playing alongside Rory Mcilroy I wondered if his focus may become irritated, but he put together another great round, albeit the lead was not so impressive as in previous tournaments.The final day arrived and unfortunately the play was suspended by an hour and a half due to bad weather, this meant that everybody started late.

Tournament officials had already made it known that if they could not finish today and required extra holes, that they would have to come back tomorrow.I think on every players mind this was not a desired outcome and with that they all played fantastic games at a ferocious pace, unfortunately for Rory it was not fast enough and he constantly found himself waiting to tee off for the groups ahead.During the day the lead swung from Rory to Rickie Fowler to Phil Mickelson until Rory Mcilroy hit an eagle on the 16th and took back the lead. Another birdie gave him a two stroke advantage coming to the 18th.The final hole was played in almost unplayable conditions with it being around 8pm local time and very dark.However Phil and Rickie obliged in allowing Rory and Bernd Wiesberger to tee off which meant they could decide to finish the hole or not, they then played their second shot to the green before Phil and Rickie could finish their rounds.Allowing for Rory to chip out from the bunker and having the luxury of two puts he tool them both and secured the win. Take a look at some of the footage from the 2014 PGA Championship.It was a massive exciting day of golf that entertainined and thrilled packed galleries and those at home right down to the final put.I’m sure that the 2014 PGA championship will be talked about for years to come for many reasons not just that a new era in golf being Rory Mcilroy has truly begun…