Arriving in Cartagena in Colombia.

“What To See In One Day In Cartagena, Colombia”

Cartagena is on the Caribbean coast of Colombia and is the place to stop before heading through the Panama Canal. Before doing our back to back Caribbean cruises we had spent nearly three months in Colombia mostly in the city of Medellin and had only heard lots of good comments about Cartagena. 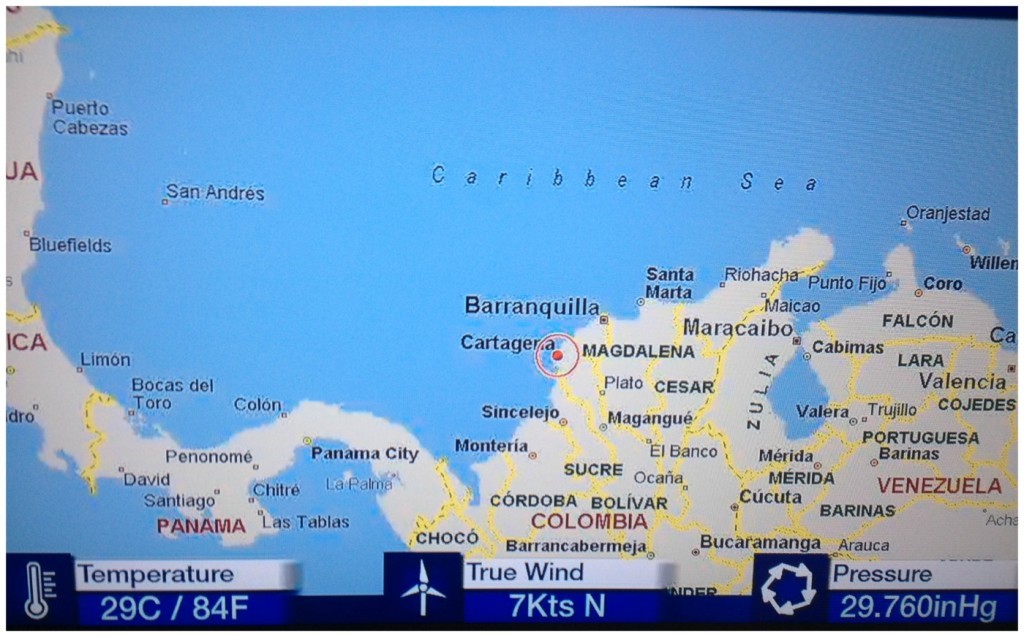 Map showing where we are

We arrived in Cartagena at 8am alongside the dock and we were off at around 9am. We had no tour booked hoping to get a taxi, but as we got off there are only the tour busses and a walkway to the terminal exit where you can get taxis.

We enquired about a taxi and the staff said outside they cost $15 to get to the old town.

There was however a tour, ‘Hop on Hop off’ which was leaving very soon that took you around the city area and to the old town, allowing you to get on and off when you wanted, bringing you back to the ship at anytime.

“Hop on Hop off Tour Cartagena”

We decided to give it a go, the cost $39 per person nine dollars more than the taxi but at least we will get to see lots more of Cartagena.

The double-decker bus drove around the area with commentary pointing out certain places of interest. We did the entire loop before getting off at the old town. 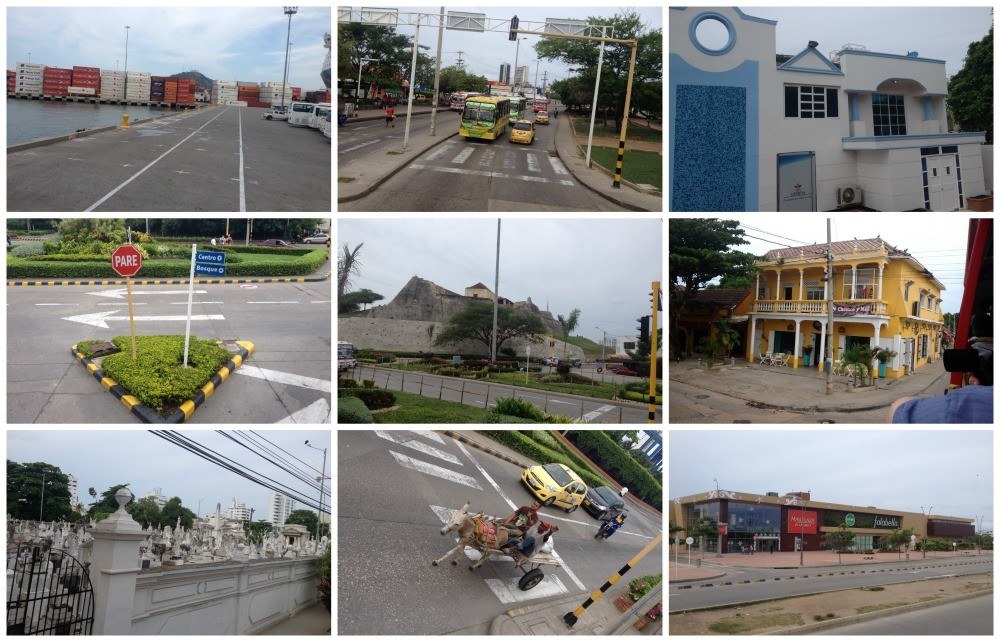 The beautiful city of Cartagena 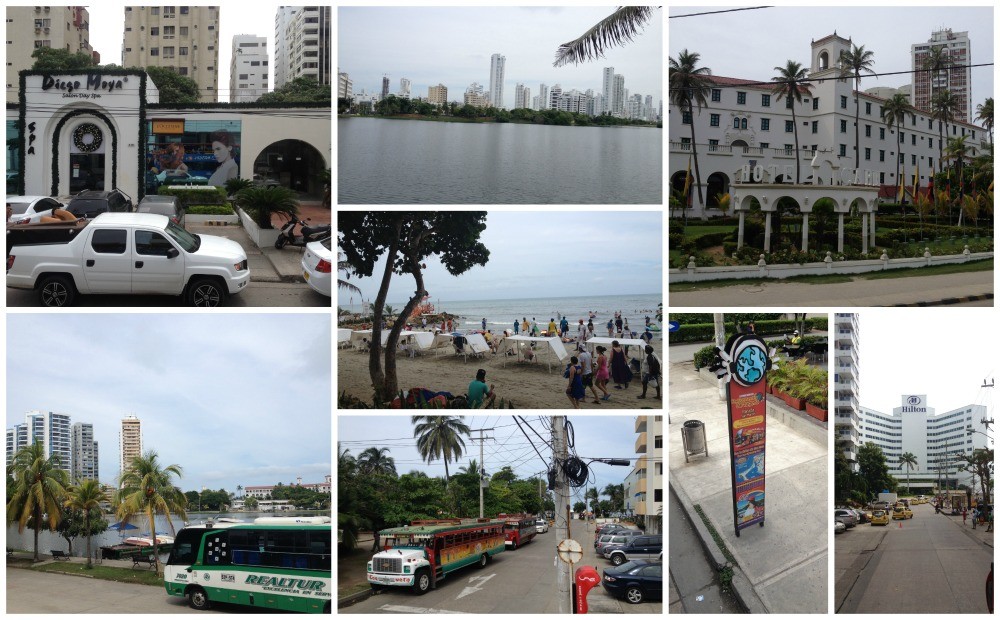 Hop on Hop off tour around Avenue San Martin & Bocagrande 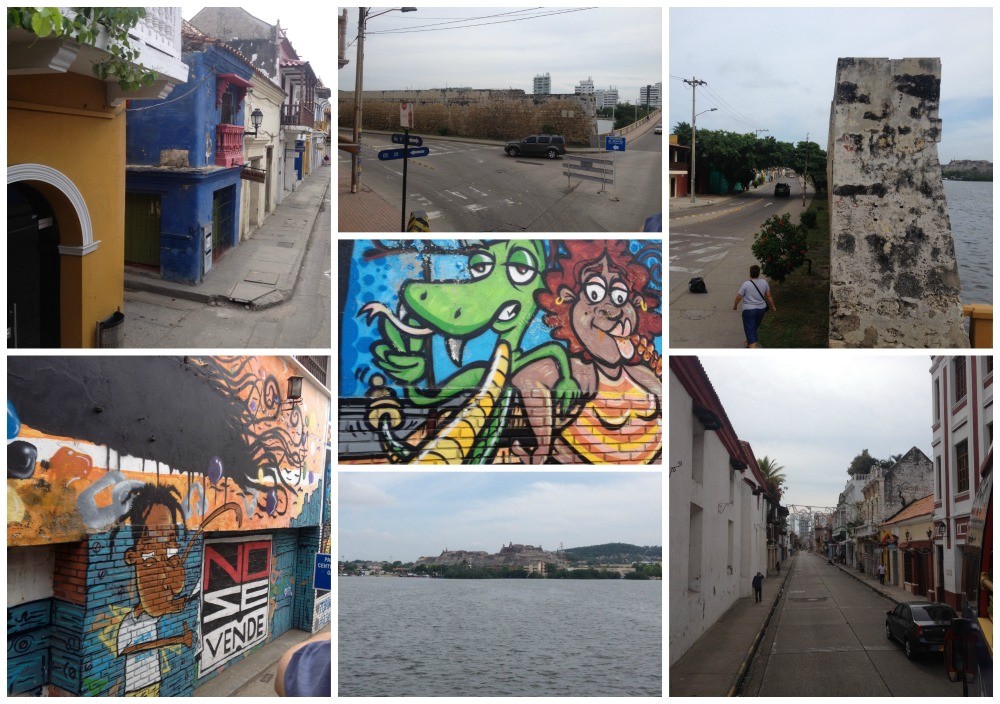 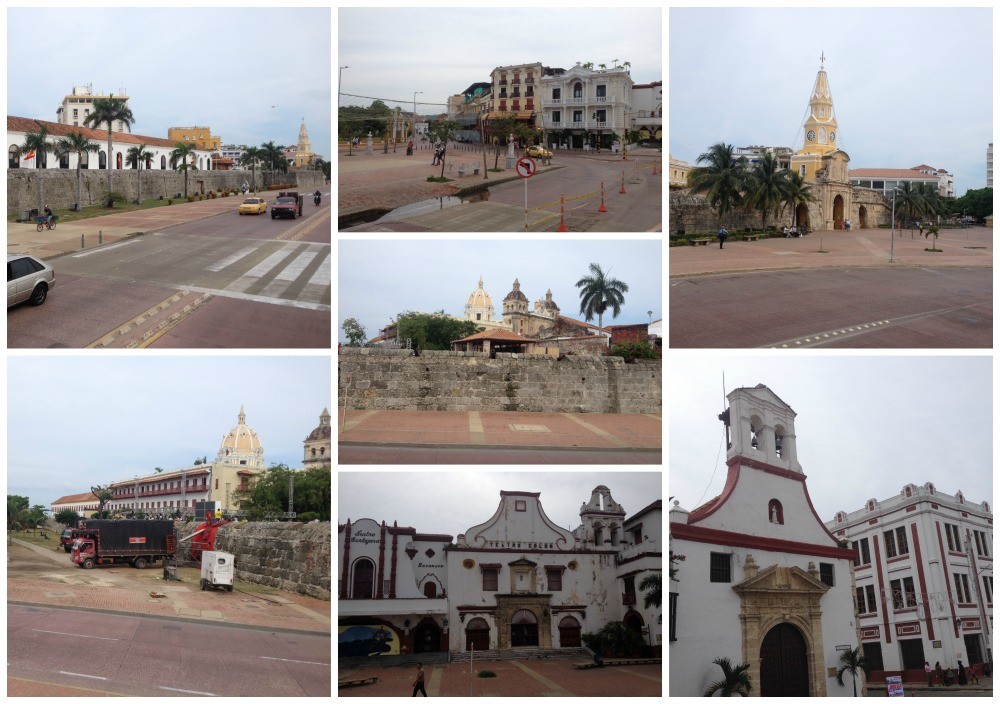 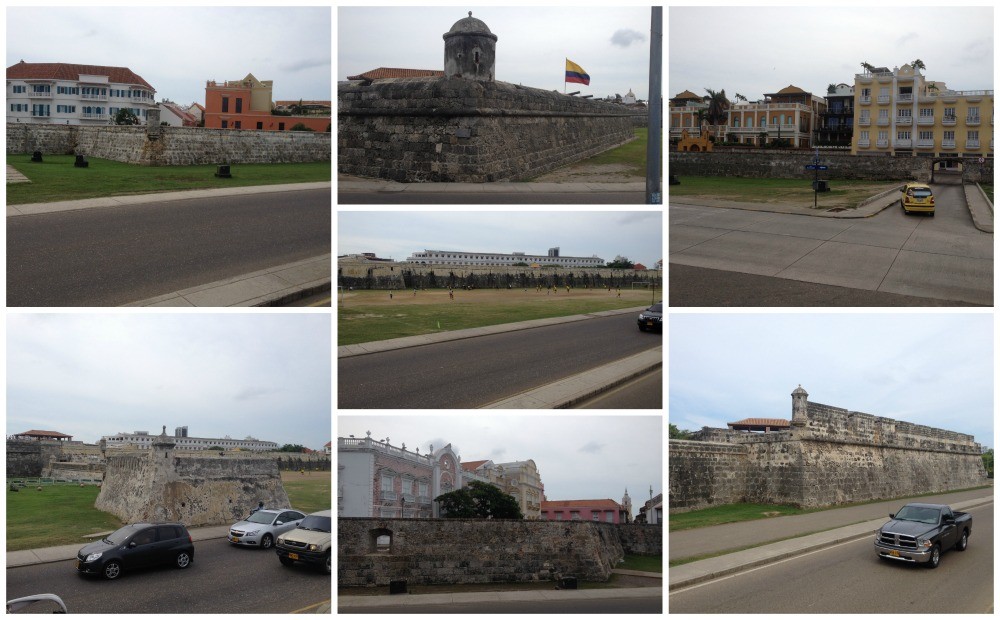 “The walled city in Cartagena”

The tour actually includes a guided walk around the old city but we wanted to do our own thing.

Our walk around the walled city old town was very nice, we enjoyed a cheap lunch and beer, before a tinto (coffee) from a street seller, and later a coffee from Juan Valdez to use the WiFi, which was slower than the ship!!

The Santa Teresa square in the old town

There are so many streets to walk and lots of shops in one area, the rest has lots of wonderful buildings to look at. We stopped and had a menu del dia for lunch at 8,000 peso each including a beer, about $4 AUD.

Streets inside the walled old city

images from the old city in Cartagena

The walled city has a really nice feel to it and is well worth a visit. There are many church’s and hotels as well. 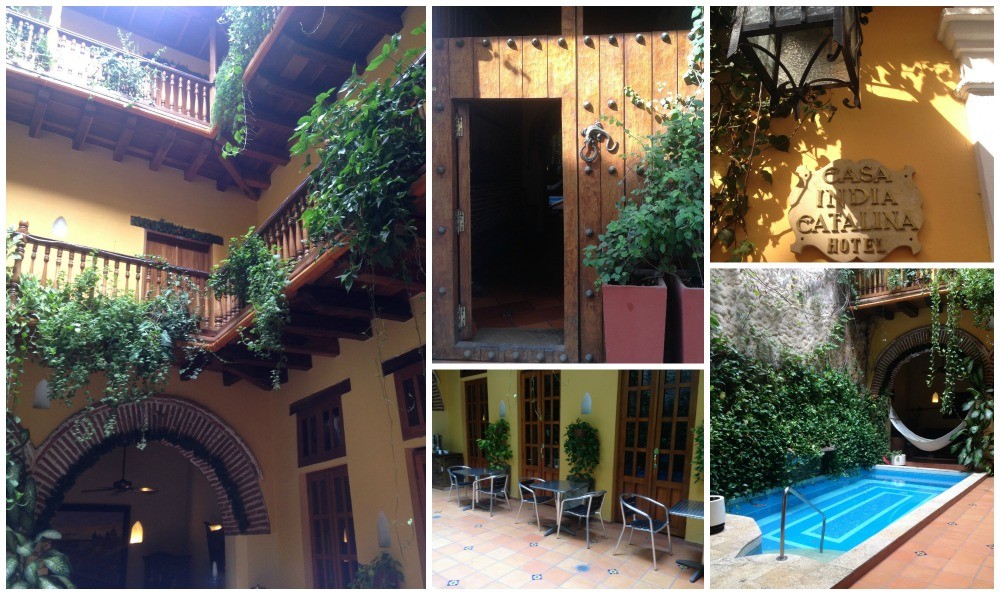 We continued walking around before getting the hop on hop off shuttle back to the ship.

As we got close to the terminal Moni spotted a couple of Macaws in the trees, (I missed them) and she was very excited. At the ship we almost boarded, we checked the time, and looked at each other, a quick decision to walk back to the terminal entrance to see if we could see the Macaws, we had enough time.

The great thing was that these Macaws that Moni had seen from the drive back to the ship were free, like not in a cage. They were being fed here and had been for many years but they were free to come and go as they please, some had rings on. The people here had set up nesting boxes in the trees for them, not sure if they used them or not, but they were certainly eating from the plentiful food around.

They would fly in and out as they pleased squawking happily. You could actually handle them as they were so tame and used to us humans looking out for them, yet still an element of wildness in them. 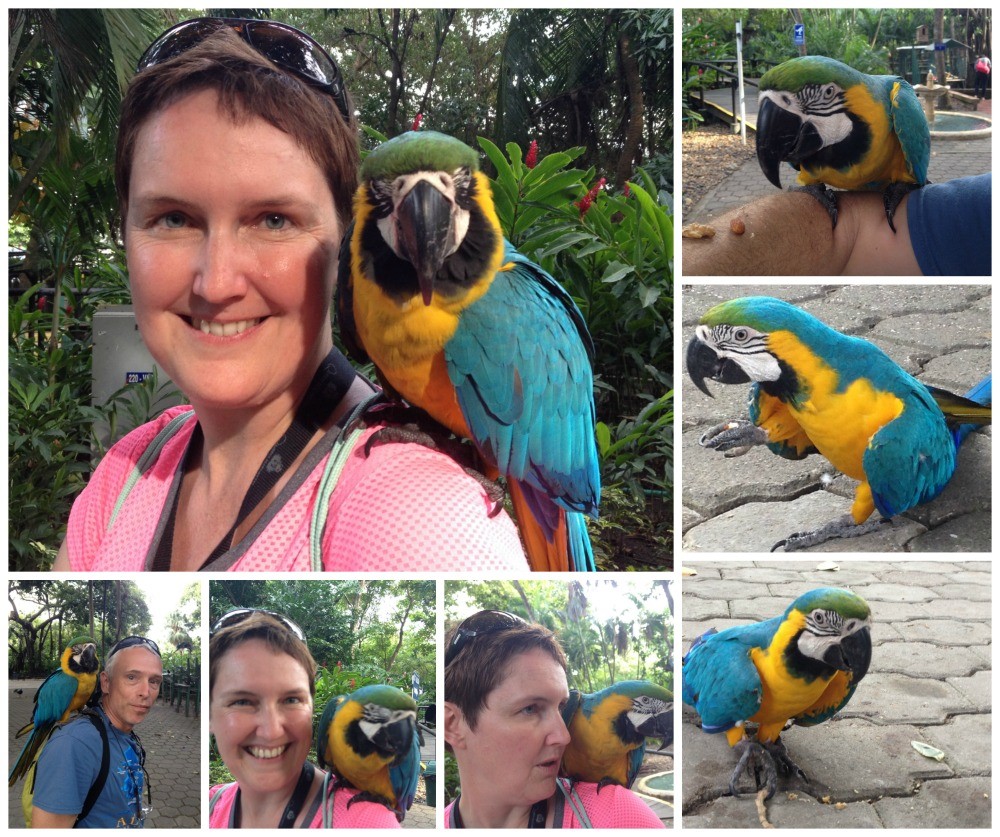 Macaws and other birds at Cartagena cruise terminal

We took one Macaw from another passenger that we noticed with him on his arm. I was a little apprehensive at first with a wild bird on my shoulder. Moni took the Macaw from me and was happy as could be.

We spent as long as we could with these birds before walking back to the ship. We were both very pleased we found this place as it would have been a real shame to miss out on the experience.

Oh, and remember this place is FREE, so you don’t need to pay to have a photo of a Macaw on your shoulder like Moni did in Puerto Rico. 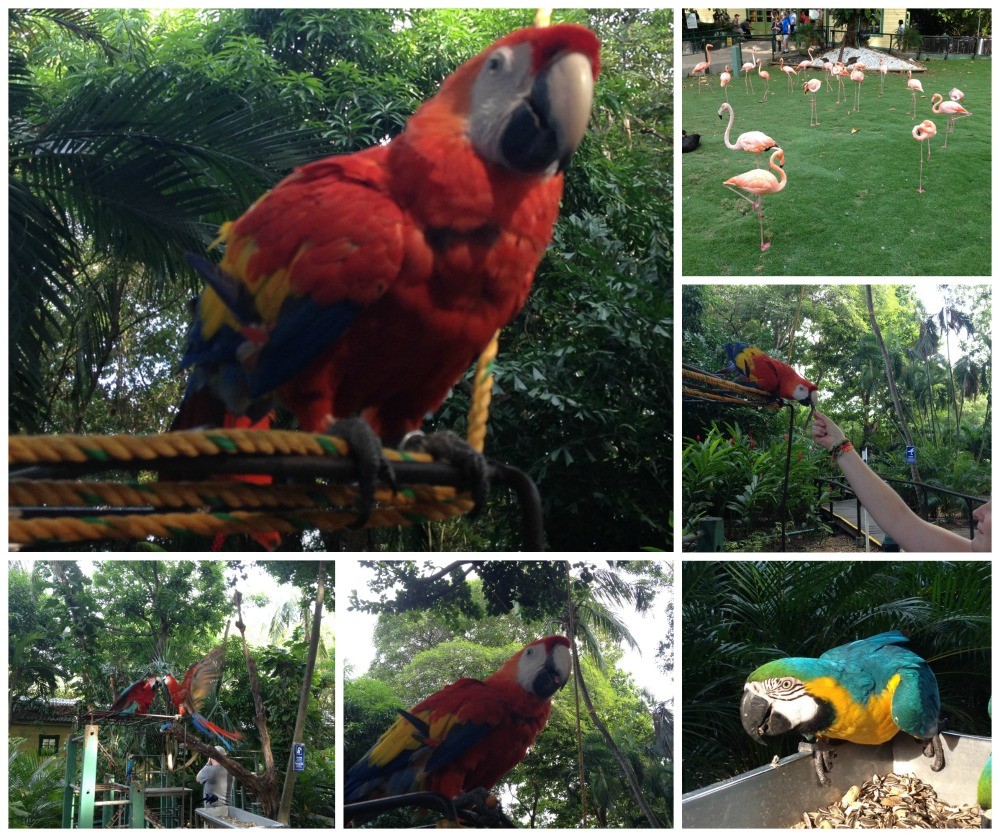 Back on the ship we cleaned up and said goodbye to Colombia once again, knowing deep inside that we will return to this wonderful country. 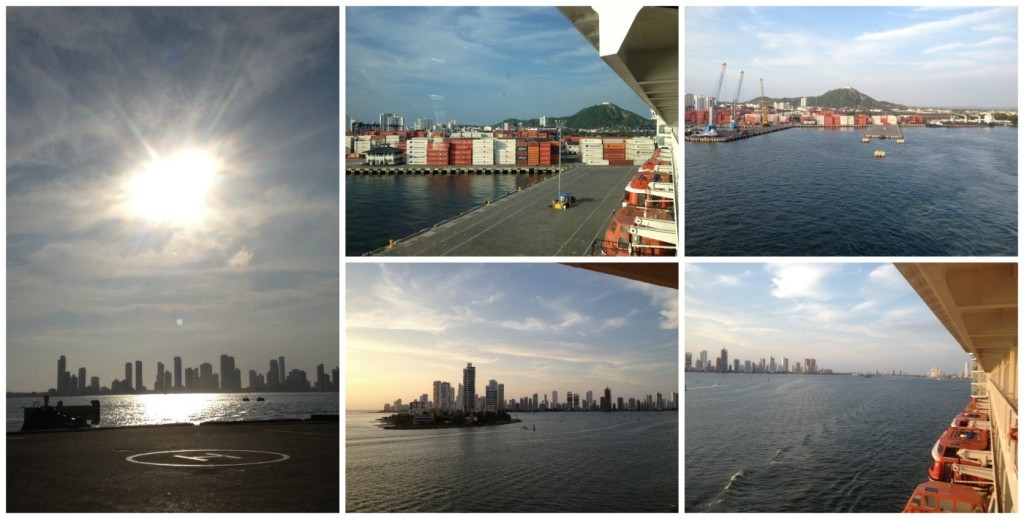 “Dinner in Qsine, a speciality restaurant on Celebrity”

Tonight we had dinner booked in the Qsine which is one of the speciality restaurants on board. We got a 50% discount for our reservation from Serkan, one of the waiters in the Trellis. So our cover charge was $25 per person, much more reasonable that’s for sure.

To celebrate our great day in Cartagena we ordered a bottle of wine and sampled a few of the fun dishes.

iPad menu in Qsine on Celebrity

We have eaten at the Qsine restaurant on the Celebrity Millennium twice before and enjoyed the different presentation and menu. 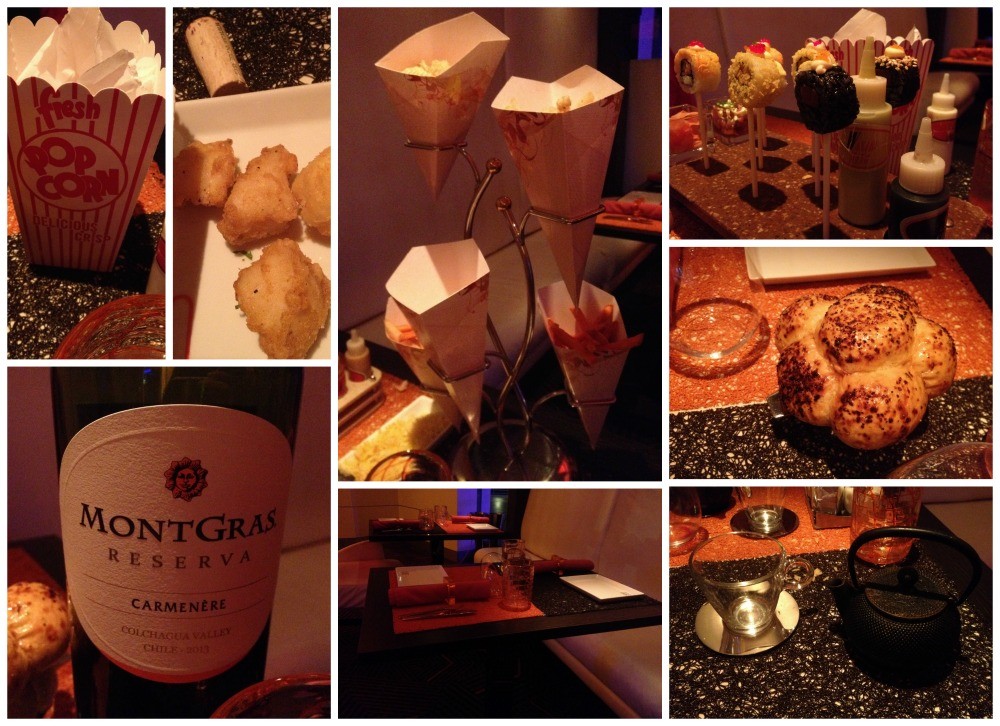 Tonight was fine and the food very tasty. We did try to have some different dishes than we had eaten before, these were our first dishes we had at Qsine. The meals are designed to share and I personally think that if you have for or six the experience would be even better as you could probably eat your way through the entire menu. As a couple you have no chance, for example the chicken dish is one of our favourites and would be even too big as a main course meal on its own.

A shame really as you only can eat so much, leaving more dishes unable to enjoy. Great if you want to come back time and time again, but at $50 each time, I don’t think so. 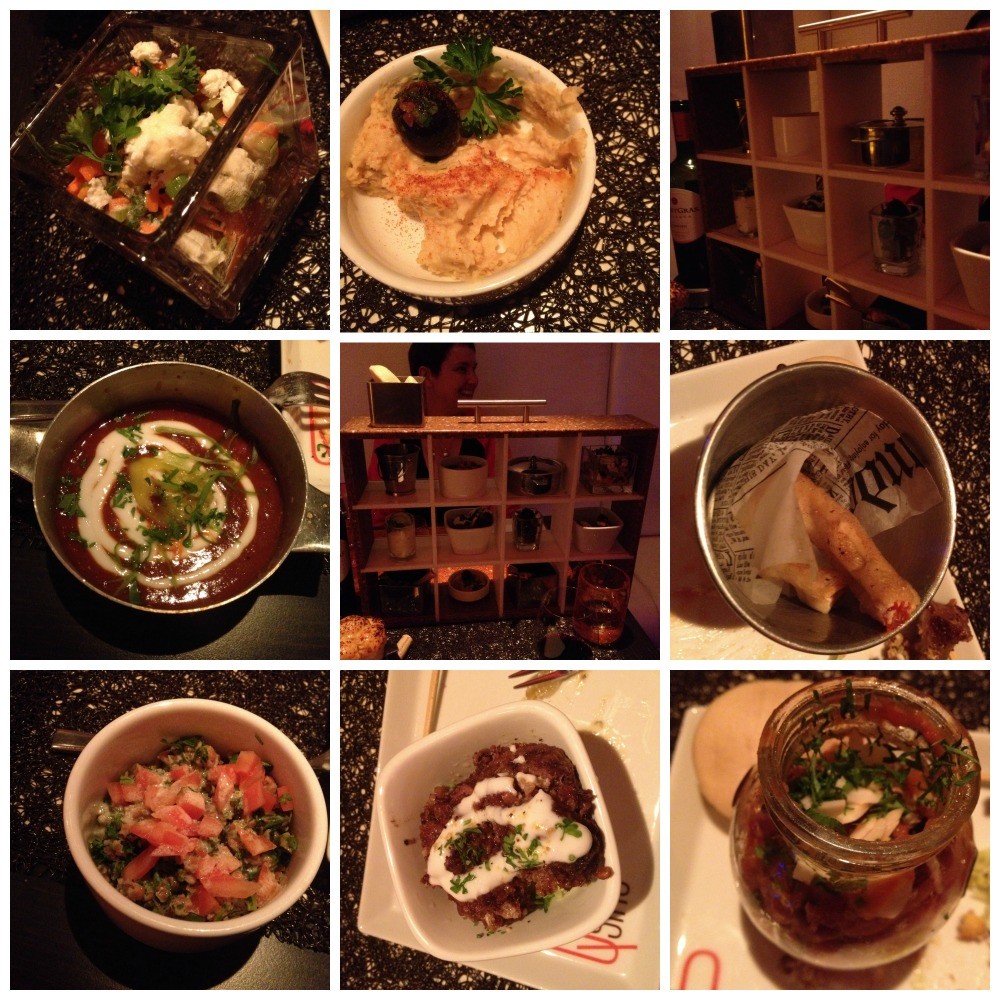 Well worth a visit though if you get the chance, just remember to take your friends.

Desert menu – the cube in Qsine

After dinner making our way around the ship we heard some great tunes coming from the Martini bar area and as we got closer we could see a duo that were the entertainment. A female DJ mixing it up on the decks along with a young man playing the bongo drums and other instruments to enhance the sounds.

It was awesome, a combination of live beats with undertones of House and Rhythmic tunes, made for some of the best sounds onboard.

Lunch At Restaurant Do Sabores in Envigado